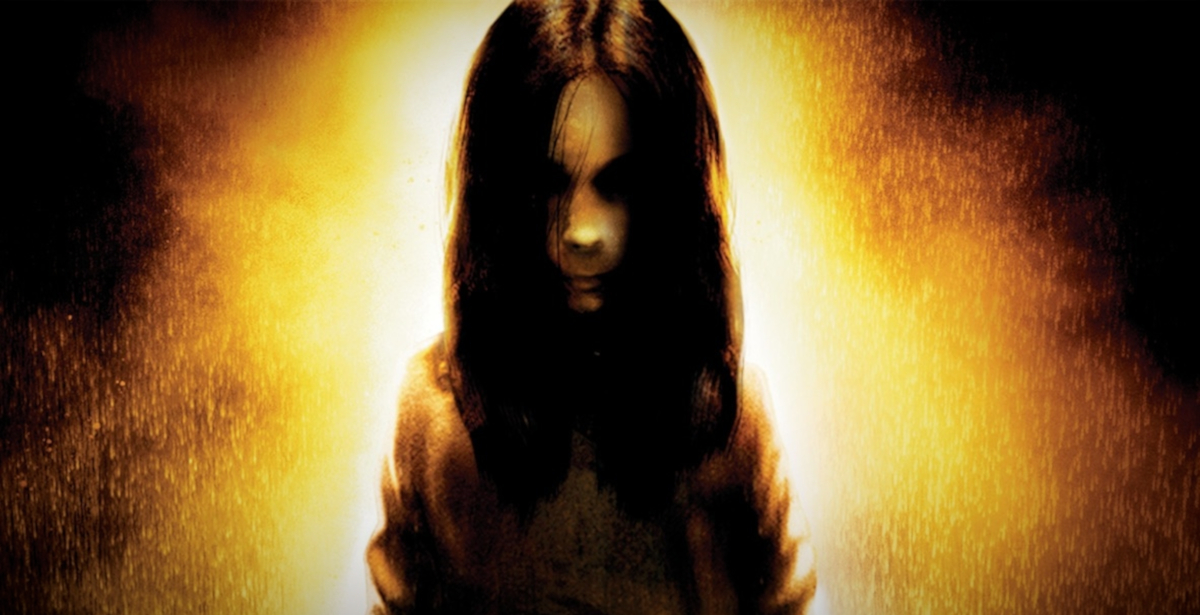 We’re halfway through October and I’ve mostly sustained my plan to binge exclusively on horror-themed video games thanks, in part, to the luxury of still being able to work from home and neglect sleep. For Part 3 of this ongoing feature, I’m looking back at the mid ‘00s and start of the Xbox 360/PlayStation 3 generation – a period that produced some incredible horror games, but also marked the beginning of the end for survival-horror genre in mainstream gaming for well over a decade.

There’s a long list of great developers that have been pushed into unfamiliar projects or reduced to support studios (and many subsequently shuttered), but Monolith Productions move away from first-person shooters is one of the most depressing trajectories. This is a developer known for Blood, Shogo: Mobile Armor Division, No One Lives Forever, and Aliens Versus Predator 2 – all quirky, creative, and fun FPS games that still hold up today (mostly). In 2005, using their established LithTech engine, Monolith Productions released an incredible FPS-horror hybrid, First Encounter Assault Recon (or simply F.E.A.R.).

F.E.A.R. benefited immensely from 1999’s The Matrix glorifying bullet time, while 2002’s The Ring and 2004’s The Grudge reignited a fear of small ghost children. Despite the American setting and sci-fi plot revolving around telepathic commanders and clone armies, F.E.A.R. quickly introduces “Alma”, a terrifying antagonist who seems to be manipulating events in the background and manifests as a young, dishevelled girl in a blood-red dress (and capable of turning those in her presence to skeletons and gore). She clearly has an interest in the protagonist, the “Point Man”, who has his own murky past that gifted him reflexes that are “off the charts”. It’s all the convoluted context you need for a visually and mechanically spectacular FPS that’ll also scare the crap out of you. 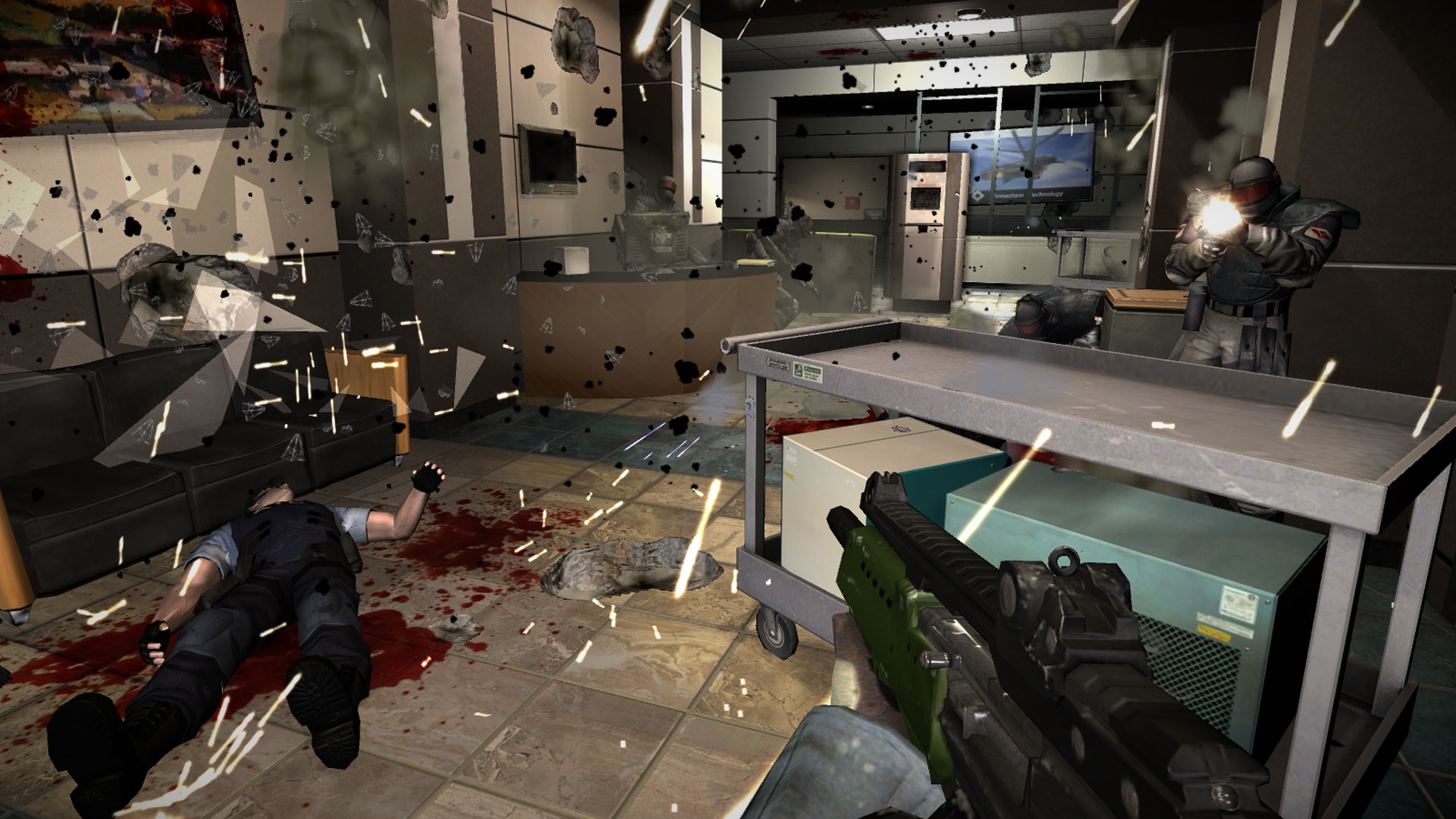 I know this looks nothing like a conventional horror game but it’s the quiet moments between firefights that are so terrifying.

As far as the basics go, you run, jump, strife between cover, punch, flying kick (a move only visually bested by Mirror’s Edge), toss grenades, shoot at enemies, or shoot at environmental hazards to make them explode. It’s conventional mid-2000s FPS-fare, until you engage your “reflexes” and everything changes. The cries of your foes slow and distort, gunshots and explosions reverberate at low frequencies, muzzle flashes cast harsh shadows across the environment, individually rendered bullets trace trails through the air, bullet impacts fill your view with clouds of plaster and flying debris, and enemies crumple or fly backwards in a puff of blood. It’s glorious and while many games have attempted it since, the relatively sterile, uncluttered, and geometrically-simple environments in F.E.A.R. highlight the particle effects above all else.

The horror elements of F.E.A.R. are so effective because they punctuate the chaotic and exciting firefights so unexpectedly. Objects will rattle and lights will flicker as you move through quiet corridors; you’ll be drawn into confusing memories and dumped back into reality somewhere else. On rare occasions, Alma will make herself known the player, casually strolling towards you out of the gloom, appearing unexpectedly next to you, or simply observing events from a distance; it’s unsettling as hell and turns everyday locations like warehouses and offices into dark and menacing labyrinths. If this all sounds appealing, you can pick up F.E.A.R., bundled with the non-canon expansions, on GOG cheaply (play the original game and Extraction Point, ignore Perseus Mandate and the sequels). If you’ve still got an Xbox 360 lying around, you can try hunt down physical copies or check if your local digital storefront has it (South Africa does not).

Fans of Monolith Productions only had to wait a few months for the release of their next horror-themed game, Condemned: Criminal Origins. Swapping the near-future sci-fi setting for a more grounded affair, with paranormal elements and deranged-looking foes, you take the role of Serial Crimes Unit investigator Ethan Thomas, hunting serial killers in the fictional Metro City. After a brief trudge through a derelict apartment block housing the latest victim of the “Matchmaker”, events kick into high gear and the next 48-game-hours devolve into violent melee brawls through the worst parts of Metro City.

Much like F.E.A.R. before it, Condemned: Criminal Origins incorporates the horror elements by making everyday locations dark, brooding, and menacing; filling them with deranged homeless people desperate the batter you to death with any object they can get their hands on; and interspersing combat sequences with creepy paranormal events. Whereas F.E.A.R. was all about stylish, bullet-time firefights, Condemned: Criminal Origins focusses on in-your-face first-person brawling – a constant back-and-forth of blocks, parries, kicks, and strikes that emphasizes careful positioning, observation, and timing. There are rare, powerful firearms you can find but ammunition is limited, and you’ll be swapping back to your preferred blunt or bladed object in no time. 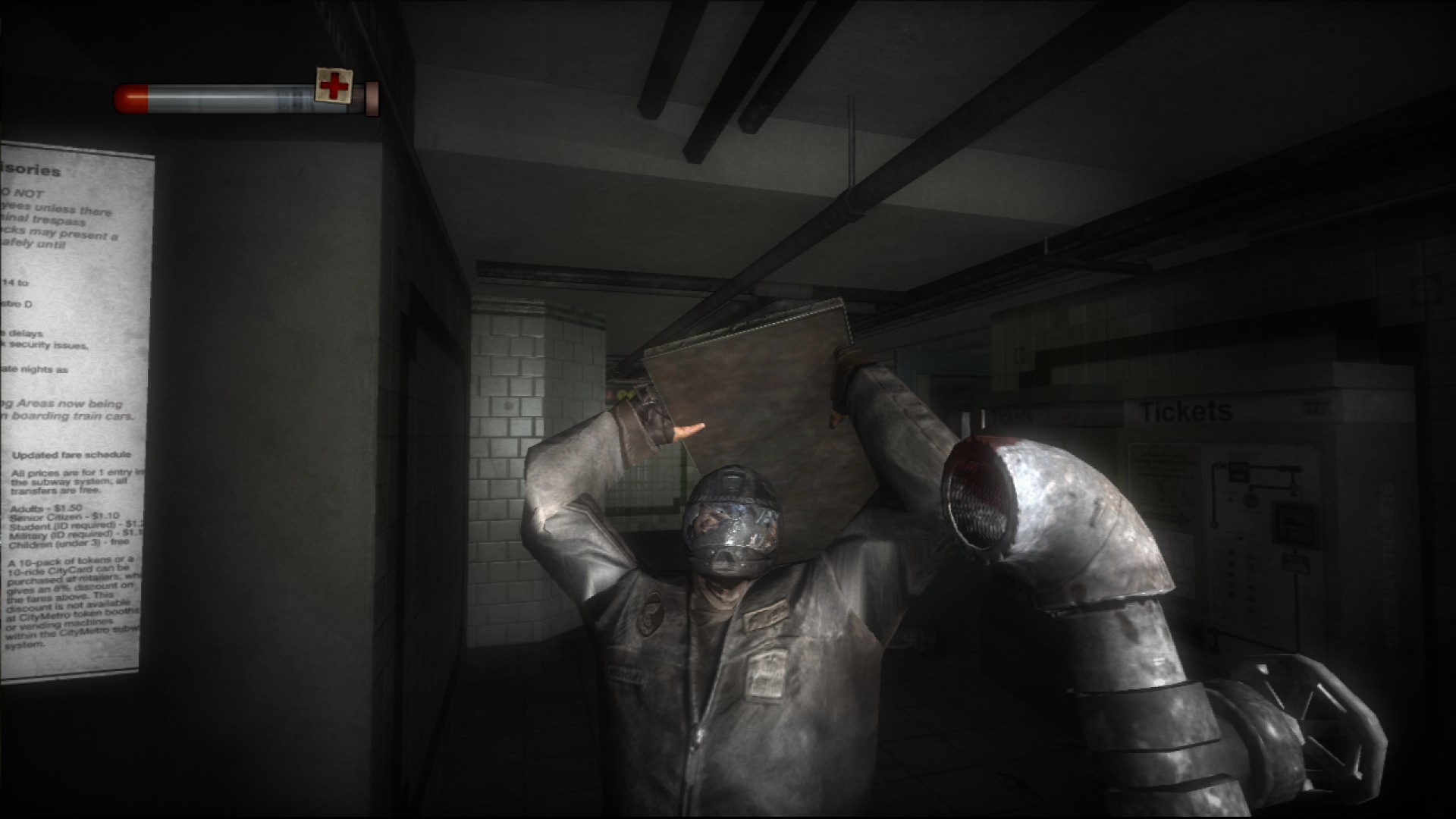 The foreboding environments, hints of the paranormal, and vagrants ambushing you from behind corners will keep you on edge.

When you’re not exploring or brawling, Condemned: Criminal Origins tasks you with forensic investigations like following fluid trails, photographing evidence and prints, or analyzing substances. Mechanically, these are simple and unrewarding as the game picks the right tool for you, but they do play a part in leaving the player without a weapon at the ready and vulnerable. These sequences often end in ambushes, a pattern that’ll keep you on edge every time you’re asked to investigate a crime scene in another dingy location.

Unfortunately, Condemned: Criminal Origins ends on a low note and teases a sequel better left ignored (which explains away the paranormal elements for sci-fi guff and introduces secret cults trying to dominate the world). After taking you through derelict apartments, a metro system after hours, a condemned mall, a fire-damaged library, and the world’s most terrifying school, things get combat heavy in the final levels. However, it’s still a great melee-brawler paired with unsettling horror vibes and some great jump scares for a good 90% of the experience. You can pick it up cheaply on Steam and the backwards-compatible version on the Xbox One is often discounted.

Despite not holding Resident Evil 4 in quite as high regard as many others (I’m more of a classic RE fan), there’s no doubting the impact it had on shifting survival-horror towards more action-oriented experiences and establishing the over-the-shoulder third-person-shooter template. Three years later, EA Redwood – who would go on to become Visceral Games and then die in 2017 due to EA’s stupidity – released Dead Space, an incredible sci-fi survival-horror that found a near-perfect balance between action and scares.

Set in a distant future where massive “planet cracker” vessels harvest huge chunks of planetary crust for resources, protagonist Isaac Clark (a talented engineer who can repair any ship system and repurpose any tool as a weapon) arrives to investigate a communications blackout on the USG Ishimura. With the main power off, a quarantine in effect, epilepsy-inducing emergency lighting, and the walls stained with a myriad of biological fluids, it doesn’t take long before the twisted and bladed remnants of the crew emerge from the vents. Isaac and his companions are separated, and this begins a lengthy and terrifying trek through the bowels of the Ishimura and, eventually, to the colony below. 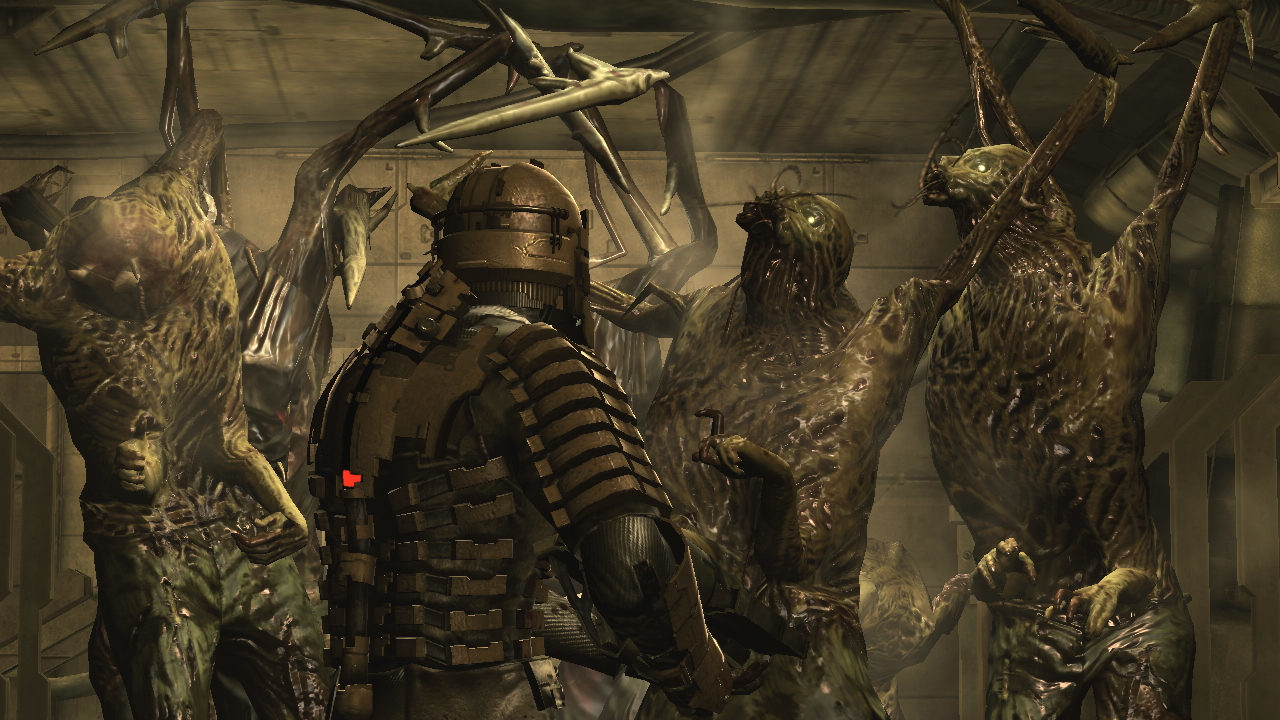 This will not end well.

The gameplay sticks close to the RE4 template: you’ve got clunky movement in tight spaces, over-the-shoulder shooting, item-management with limited inventory space, and a dozen variants of necromorphs trying to separate your limbs from your body. Dead Space does two things particularly well. The first is a focus on dismembering your foes using repurposed engineering and mining tools (that must have been bloody dangerous even before the outbreak); not only to outright kill them but also disable their strongest attacks first. The now-iconic plasma cutter, paired with a “stasis module”, allows you to briefly freeze fast-moving necromorphs and remove their primary limbs to slow them down. Once you’ve got the “kinesis module”, you can grab that severed limb and fling it back at other necromorphs (along with any other pointy or explosive debris you find lying around). The second aspect is the complete removal of a conventional HUD to aid immersion. Your health status and ammunition count are visible on your rig, while the inventory and map is a holographic projection (that, of course, does not pause the game).

New weapons, abilities and frequent upgrades slowly turn Isaac into a necromorph-killing machine, yet Dead Space never lets you get comfortable. You’ll face increasingly deadly necromoprhs (several capable of one-hit-kills) but the true highlight is the environments. An early level set near the ships engines is so loud you can’t hear necromorphs bursting through vents and stalking towards you. A near-silent journey through the candle-lit crew quarters is simply a prelude to being stalked by an unkillable, regenerating necromorph as you scramble to reactivate several systems. Dead Space remains an incredible blend of gameplay mechanics, grotesque visuals, and terrifying sound design. You can pick up Dead Space on the PlayStation 3, the Xbox One by way of backwards-compatibility, or find it on GOG and Steam for PC (it’s frequently discounted too).

Are you planning on making October a month of horror-themed? If so, let us know what you think our choices and what you’re planning to play this month in the comments below.