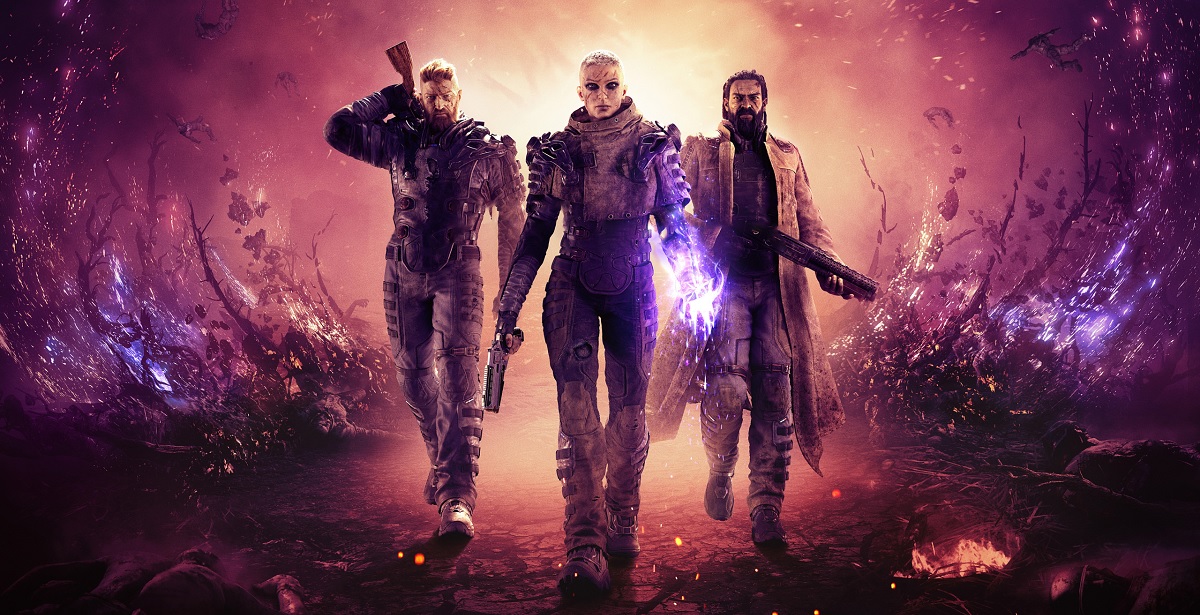 Outriders is everything I expected it to be, better than I expected it to be, but also highly unlikely to make the sales I’m sure Square Enix want it to (not that they’re ever satisfied with their IPs). It’s a blend of Gears of War (style, tone, and gameplay), The Division (skills, gameplay, and loot), and Destiny (loot and the UI). Despite environments and the basic gameplay loop having a distinctly artificial and “gamey” feel, the minute-to-minute gameplay is fun, and massively more so when played cooperatively.

Set in the not-so-distant future, in which natural and/or technological cataclysms have wiped out Earth, you play the role of a mercenary-turned-"Outrider" (think planetary scout) on an Ark ship that has finally arrived at the planet Enoch, 100 years later. Internal politics devolve into all-out combat, a mysterious energy storm sweeps across the surface, and your protagonist – with basic gender and cosmetic customisation options – is stuck back in cryo after being exposed to the storm energy. 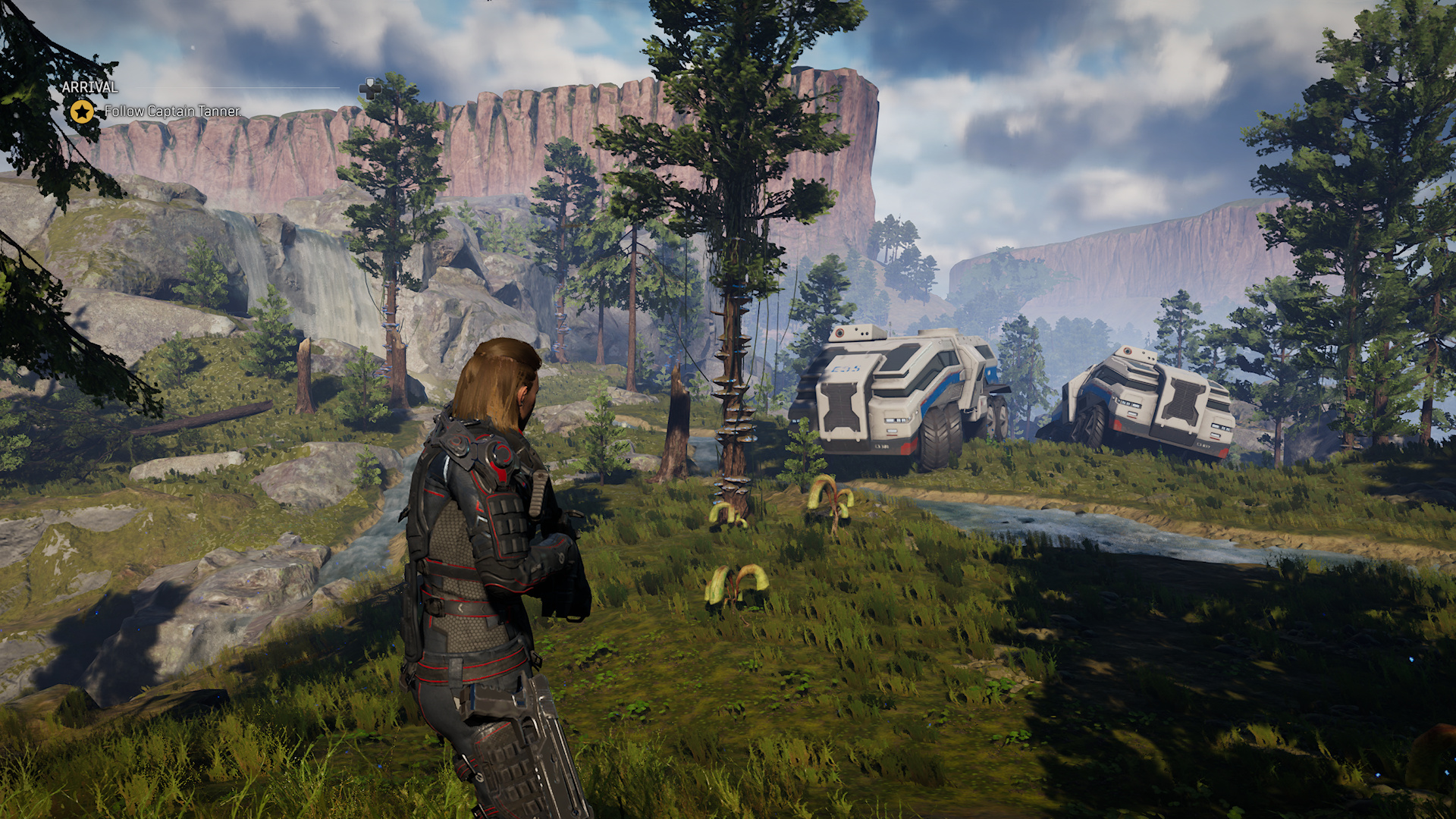 It all starts out so peacefully for the human survivors…

Waking up three decades later, now “altered” by the storm, they find themselves in a war-torn world that looks a lot like Earth did before they left. Sticking to the tone of Gears of War and Bulletstorm, everyone is a grim, foul-mouthed badass (even those that seemed friendly and likeable during the prologue).

Everyone is fighting for survival – the remnants of Earth governments, psychotic bandits clans, and other “altered” – living and dying in sheltered valleys, unable to leave due to increasing storm intensity. You join up with the remnants of your Outrider team and set about killing your way to freedom. 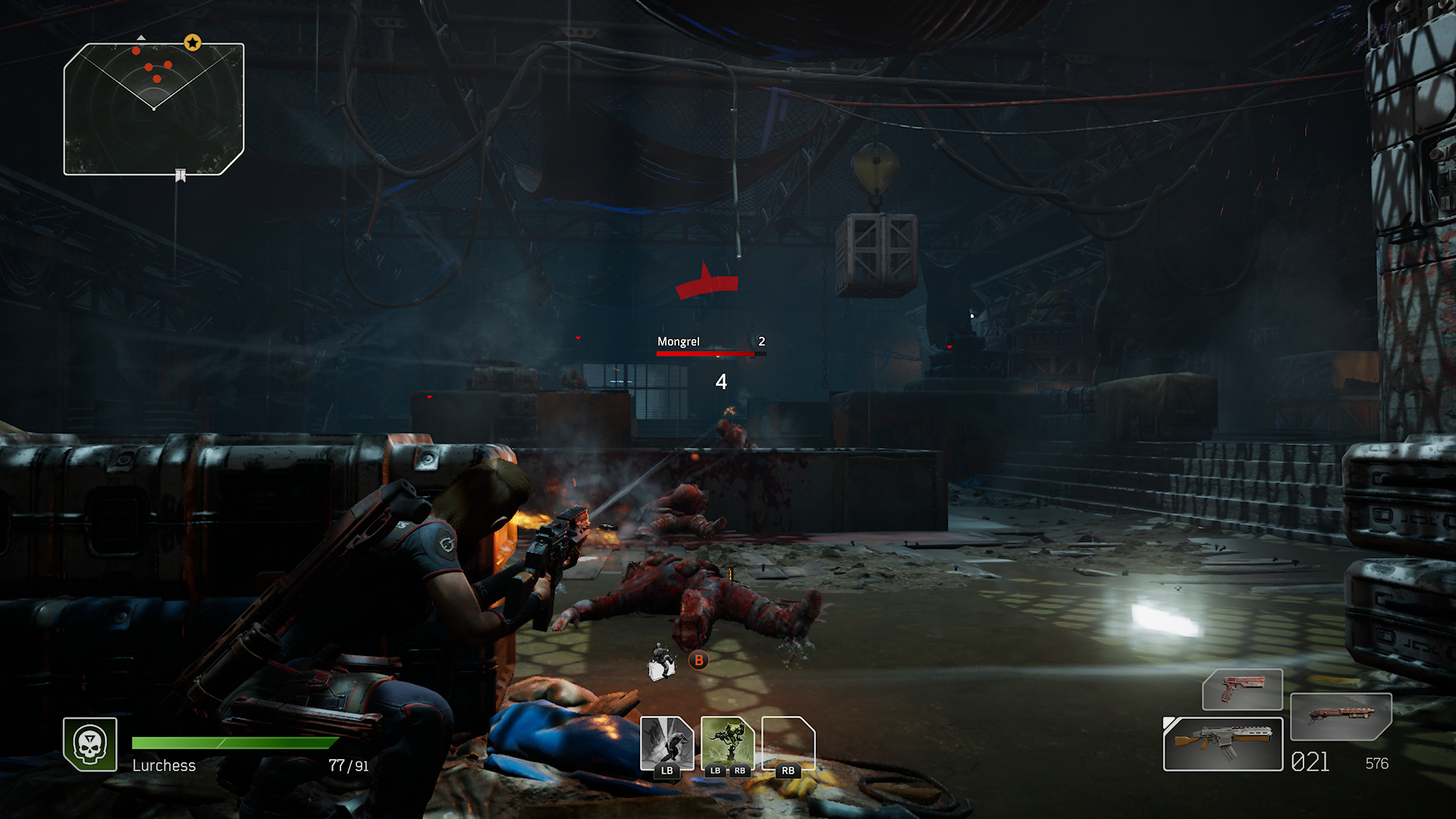 …before you’re back in the saddle murdering each other.

There is a surprising amount of narrative – with a ton of cutscenes and collectables to read – that feels at odds with the always-online, coop-shooter gameplay loop at first (take note: you can’t pause). This means plenty of context for your actions and, despite the simplistic and often painfully cliched story, it’s at least coherent.

Thankfully, the gunplay and powers-based combat are much, much more interesting. The mix of Gears of War (weapon choice, positioning) and The Division (managing cooldowns, synergizing skills) makes for a compelling experience. Notably, and unlike those games, health-gain is always tied to damage-dealing or kills, so the safest way to play Outriders is aggressive. 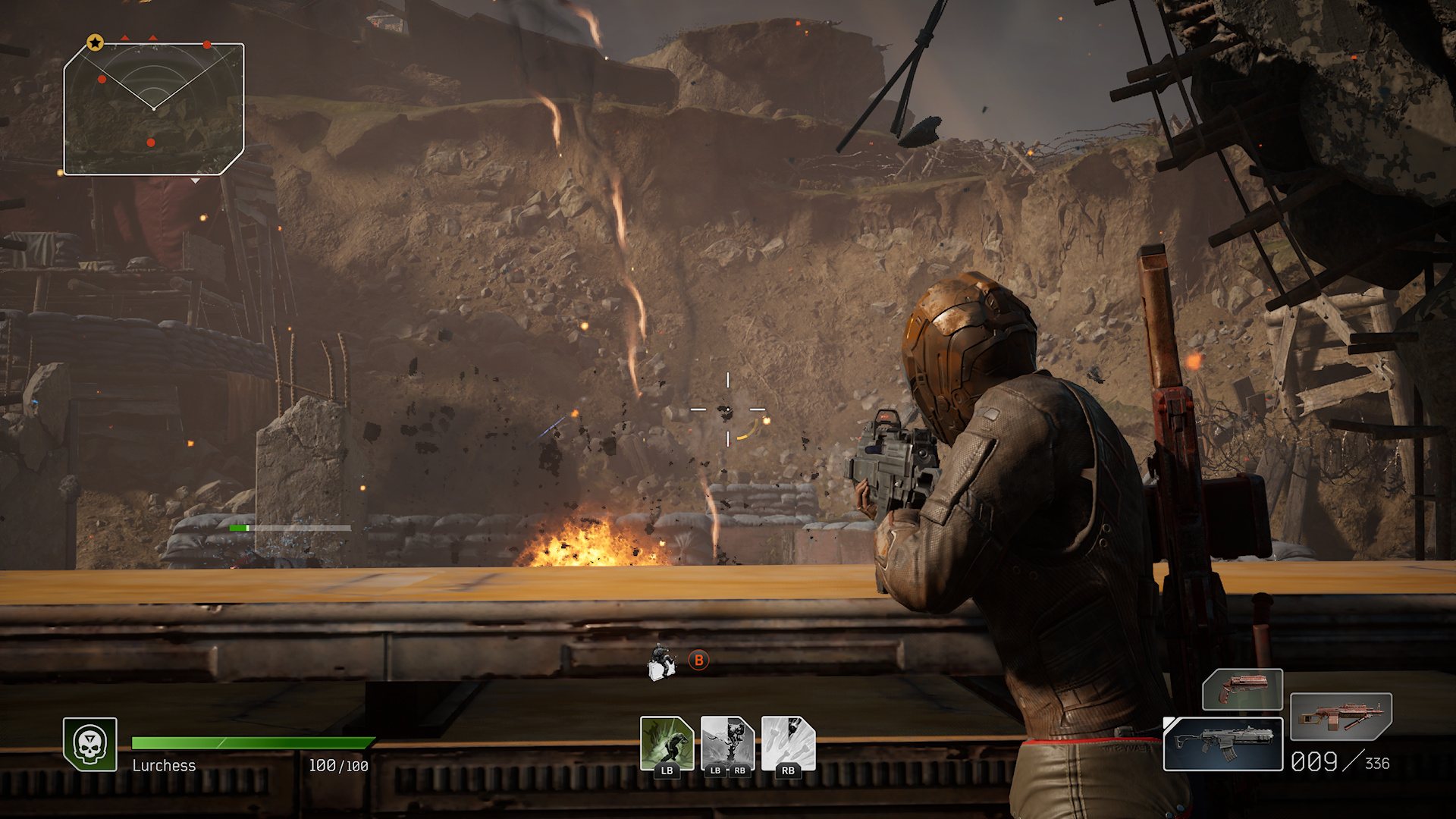 Most powers are designed for crowd-control or flushing enemies from cover like this artillery barrage.

Unlike many “tactical” cover-shooters, Outriders doesn’t devolve into a mass of enemies that just slowly rush your position after firing a shot or two (i.e. every cover-shooter since Gears of War 3). There are melee and shotgun-wielding foes that will get close, mid-range rifleman and grenadiers that’ll flush you from cover, snipers that’ll hit you hard when you trying to move across open ground, elementally-enhanced “captains” that complicate matters with their AOE-attacks, and finally other “altered” who pack devastating, elementally-charged weapons and powers.

It’s a good mix that keeps you on your toes, but also gives you time to make decisions about how you want to advance across a battlefield. It’s also a hell of a lot easier in coop, when you can draw fire from one another and synergize abilities to quickly wipe out foes. This is especially noticeable during boss battles that – if played solo – can fluctuate wildly in difficulty based on how effective your class is against them. 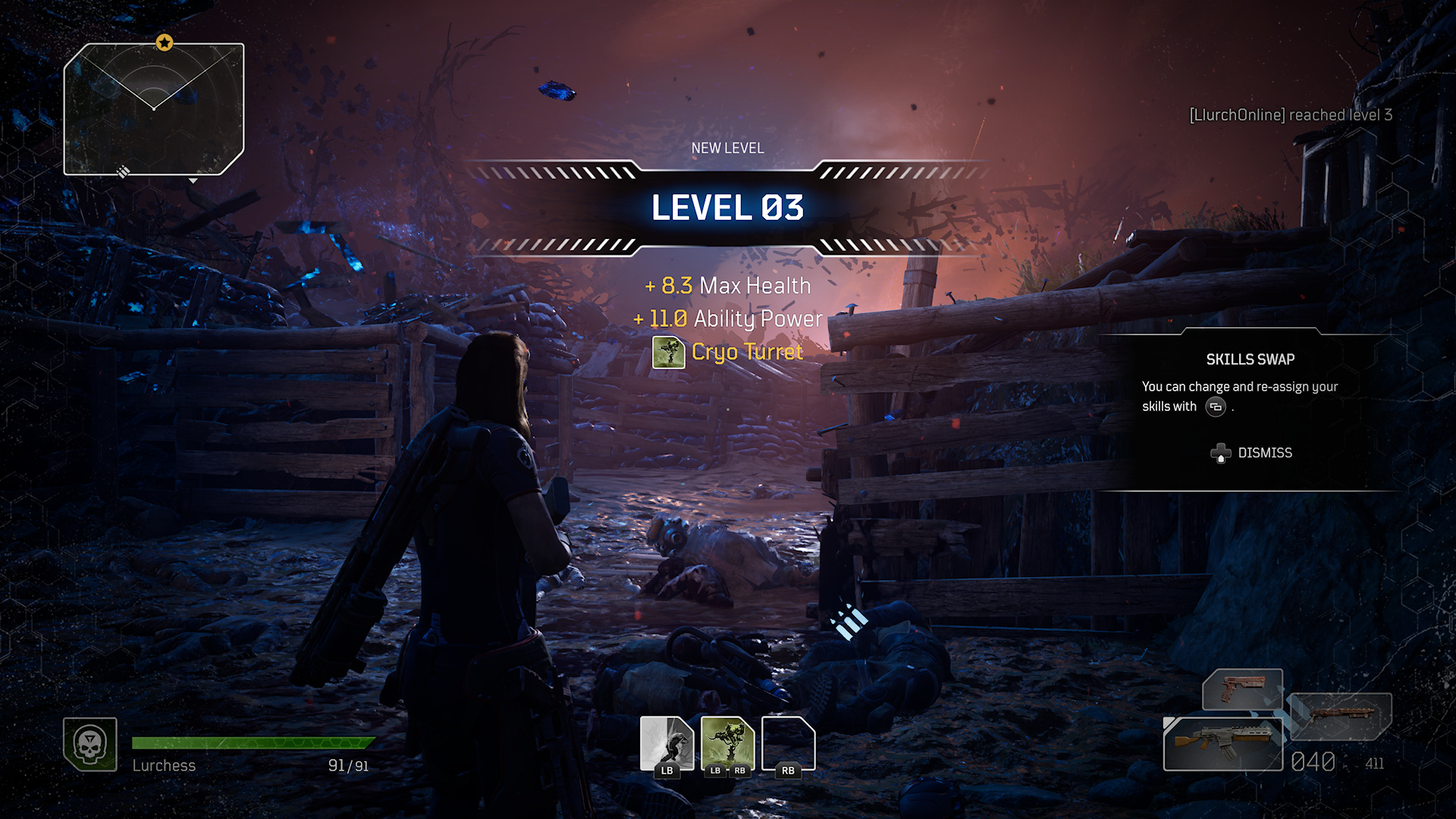 Each level provides basic stat boosts but, more importantly, new skills that you can mix and match, assigning three to the bumpers.

I chose to play as the Technomancer class – with a focus on long-range engagements, ice powers, and technological support – wielding an accurate assault rifle and back-up shotgun (there are four classes in total, the others covering fire, gravity, and time powers). A typical battle involved slamming into cover, tossing out an ice turret to freeze approaching enemies, lobbing an ice blast grenade into frozen groups for AOE damage, before repositioning myself so that a creeping artillery bombardment would hit the maximum number of entrenched enemies.

With chunky bullet-sponge enemies and brisk cooldowns, you’ll be using powers as often as bullets, gibbing foes and coating the environment with gore. It’s not quite as impactful as Gears of War – an inherent issue with the loot and levelling system – but cutting through enemies felt good, no matter my level or loadout. 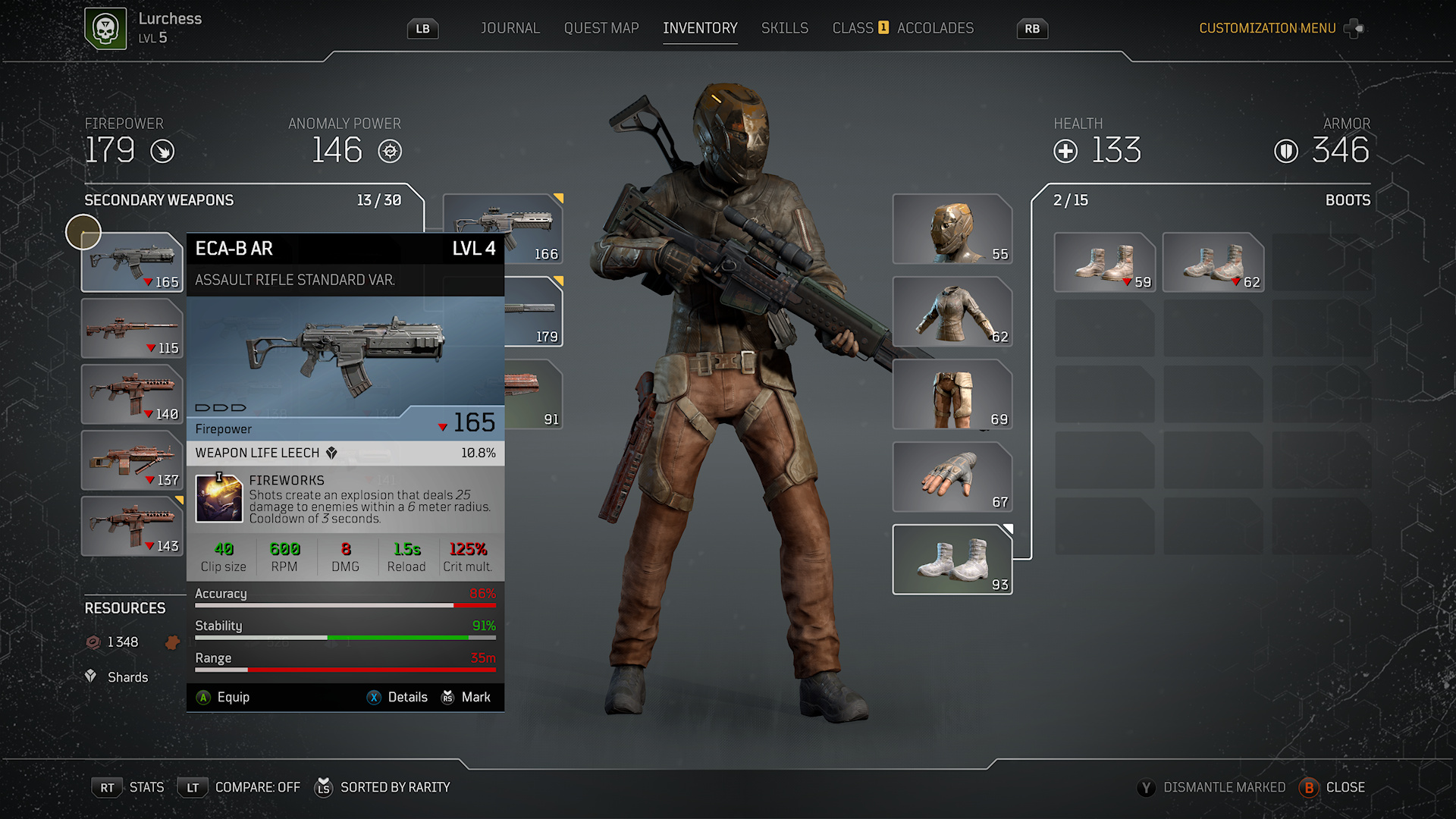 There’s not much to say about the loot system you don’t already know. Looter-shooters have been copying the same basic design for so long now, I can’t remember a time when the UI didn’t look like this.

When it comes to skills and loot, you’ll slowly gain player-levels that unlock new abilities (you can select three at a time), while you can adjust the “world tier” as you progress, making enemies tougher but guaranteeing better loop drops. The loot is… fine. You’ve got the typical white-green-blue-etc. tiers for weapons and gear, with skill-modifying perks (in addition to better stats) available on blue-tier items and higher.

What I enjoyed about my time with the demo was the speed at which you increase your player power, not simply unlocking pitiful “+X% to skill-Y damage” increments so common in MMO-like looter-shooters. Outriders wants you to play around with, and create powerful builds during your first playthrough, not relegate them to end-game content for those willing to grind. 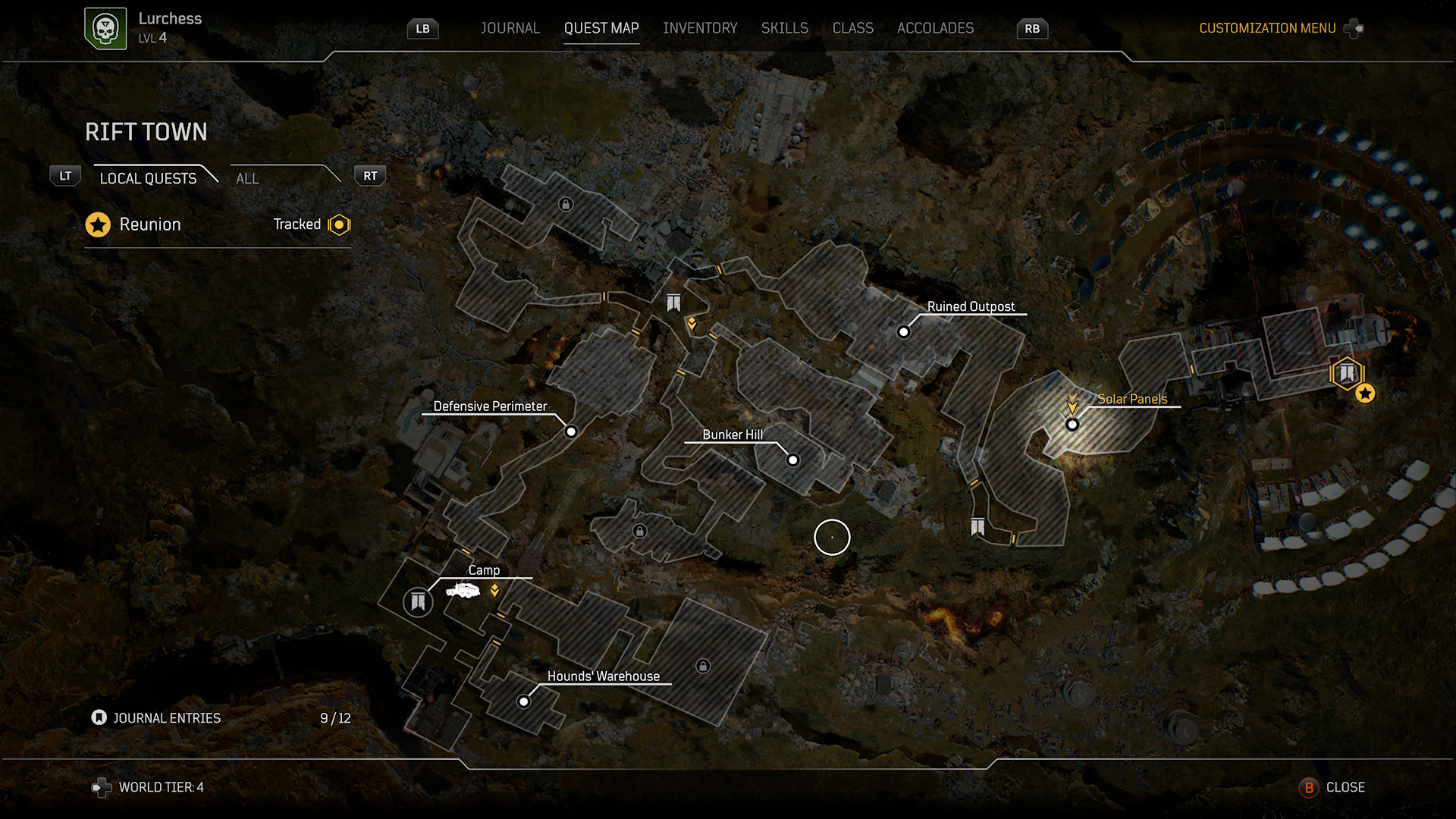 The world is, effectively, a meandering string of pathways and combat arenas, with discrete mission areas you’ll travel to. It can look good and runs great, yet feels very fragmented and dated in design.

The last aspect to cover is the presentation that is, in part, tied to the world structure. Outriders has friendly hubs (with sidequests and shops), branching maze-like regions to explore, and multiple discrete mission areas you access from them. Unlike so many modern games – with open, interconnected worlds – it feels distinctly archaic but serves keeps coop players together. The biggest issue is how artificial everything feels – I don’t think the very first Gears of War (2006) had so many blatant chest-high walls.

On the upside, performance on the next-gen consoles targets 60fps and even my Xbox Series S did a great job of getting close (at 1080p resolution and higher – perhaps a benefit of the segmented world). Although each self-contained area is relatively simplistic visually, Outriders can look great when it remembers to use colours other than brown and grey. The rest of the presentation, from the sounds of combat, music, and voice-work is solid (if unremarkable).

Honestly, Outriders biggest problem at the moment is how it has been marketed. It’s far closer in structure to Borderlands – a lengthy coop-focused campaign designed for replays at higher world-tiers – rather than a live-service, MMO-ish game designed around grinding the same basic tasks for loot. If you’re looking for a fun, power-infused coop-shooter – and can turn your brain off when the narrative kicks in – Outriders might have a lot to offer when it launches on April 1st. 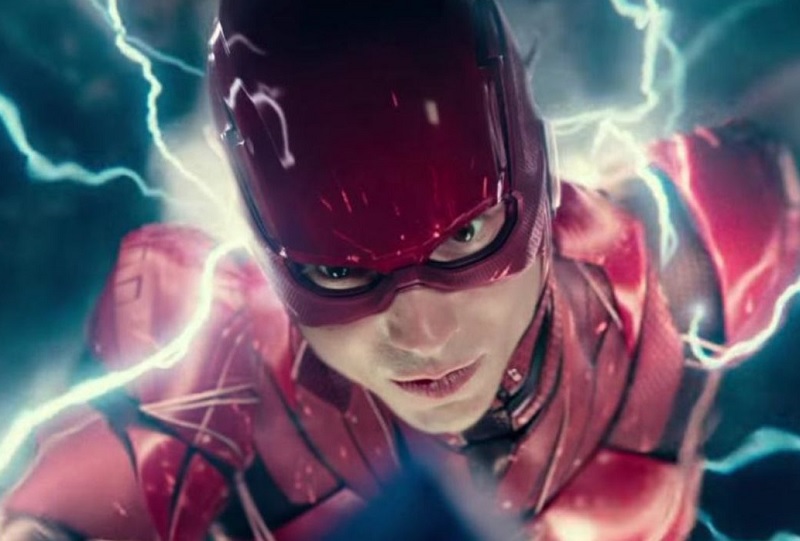 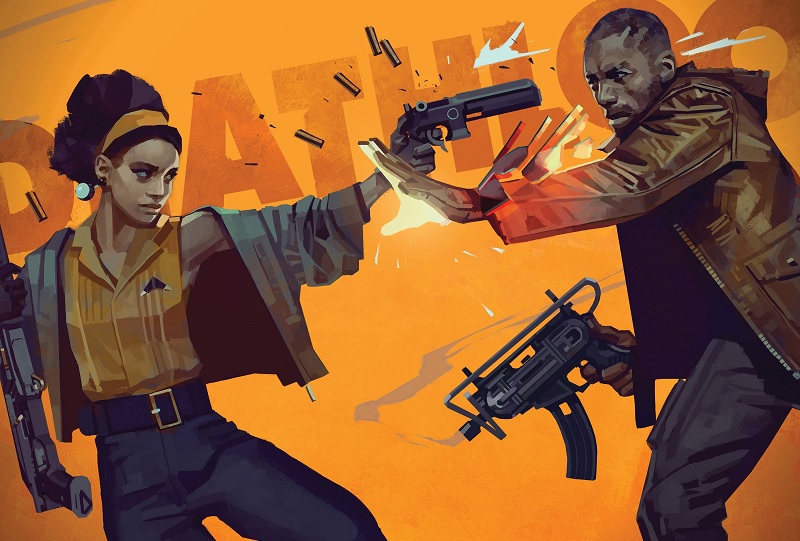 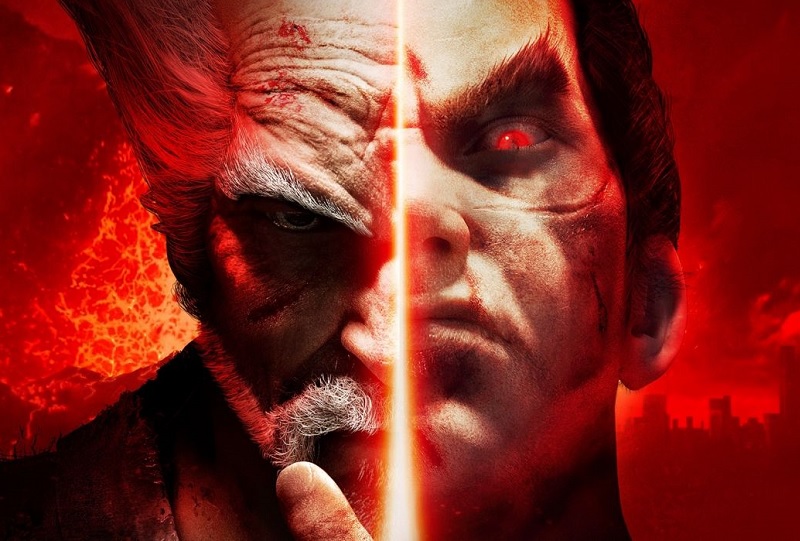