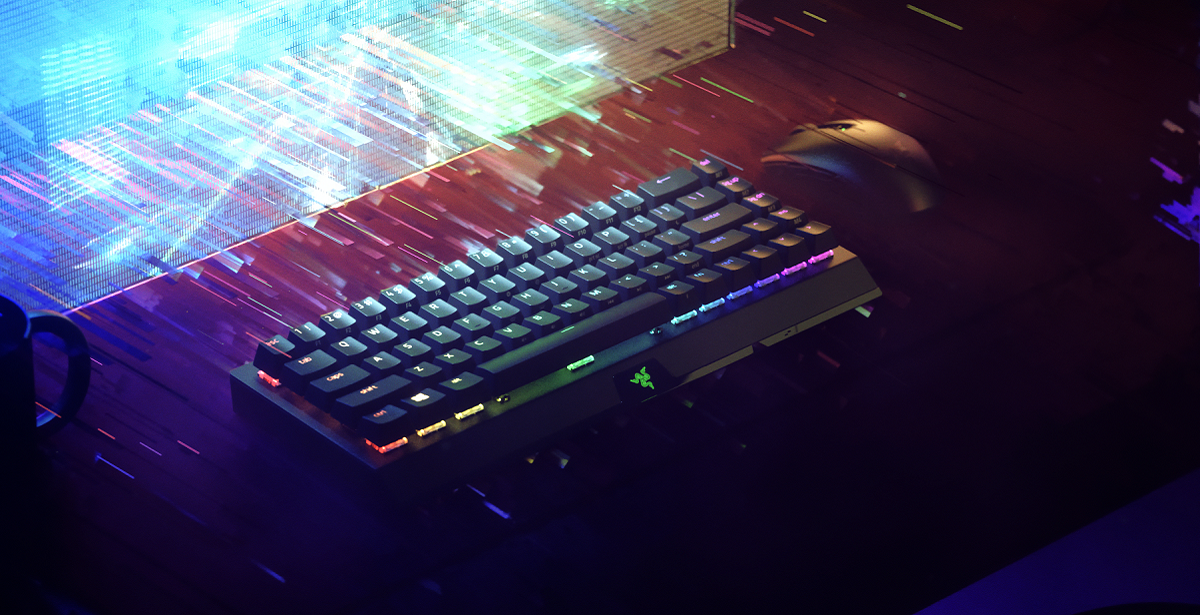 Compact keyboards are beneficial to those who are always on the go and usually tend to work well with almost any desk. Decreasing clutter by removing the cords and the size of the keyboard can be a huge game-changer for those seeking pure efficiency in a small, yet productive form factor. Pair that with a world that’s moving at a rapid pace towards a wireless future, the Razer BlackWidow V3 Mini Hyperspeed couldn’t have come at a better time. Boasting some insane specs, a form factor that eventually grew on me, and some rather useful features - the V3 Mini is an almost perfect all-rounder keyboard.

This would mark Razer’s first attempt at making a 65% keyboard and the BlackWidow V3 Mini Hyperspeed features Razer’s iconic BlackWidow design. The plastic base with a glossy plastic lip, allows the trio of snakes to illuminate its way into view with the customizable RGB logo. The plastic base is remarkably durable. Well, durable enough to give me confidence that it won’t accumulate scratches or get nicked easily. The plastic bottom is mated to an aluminium top plate that gives the keyboard some weight. However, thanks to Razer’s incredible usage of space on the V3 Mini, there aren’t many places to scuff the keyboard with fingerprint stains. 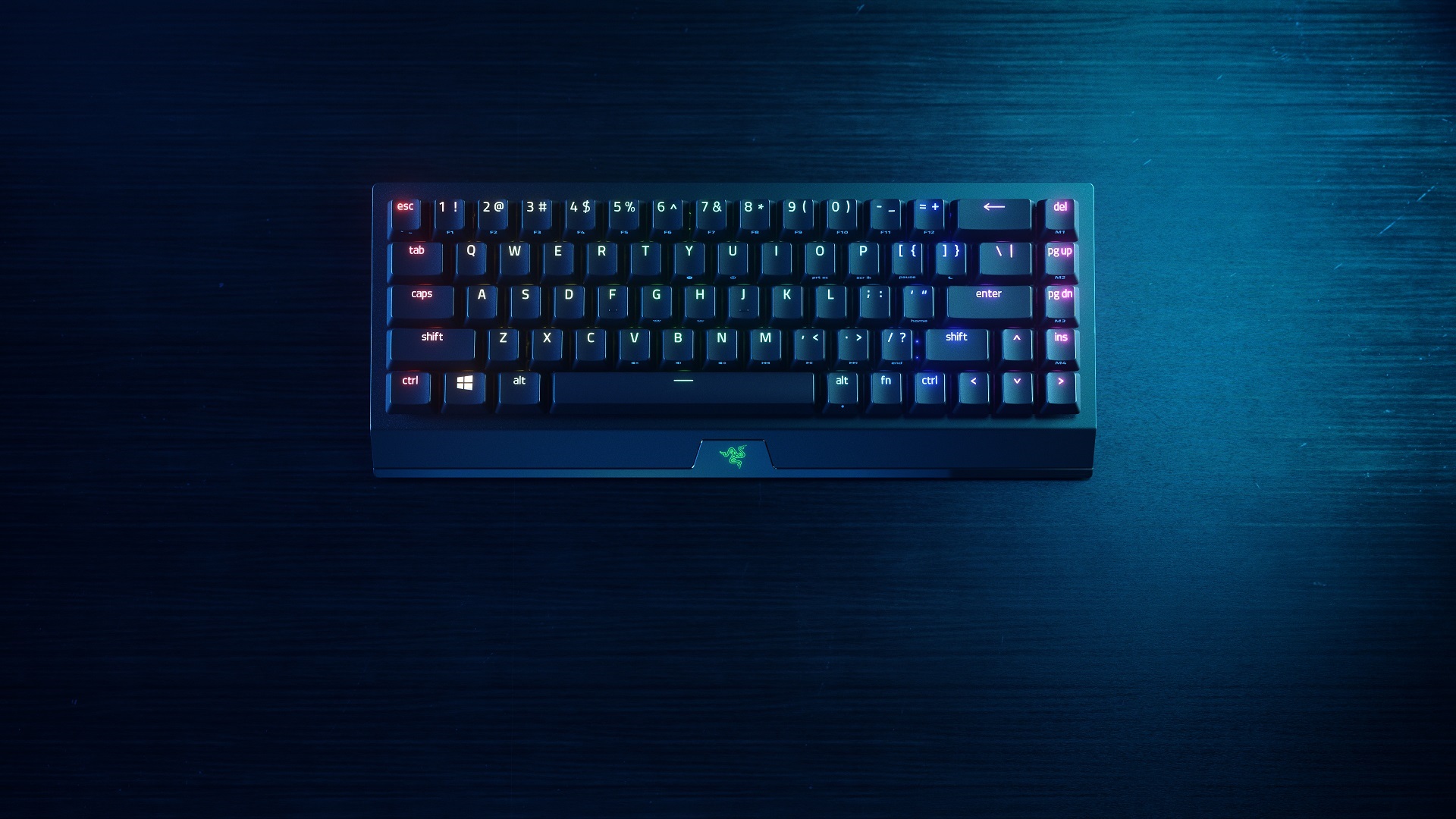 The plastic keycaps themselves are pretty par for the course. The plastic is visibly textured, allowing the RGB to shine through brightly. The BlackWidow V3 Mini shares the same font as other BlackWidow keyboards. But the RGB can feel slightly overwhelming at this size, especially if you keep it in the rainbow RGB configuration. The right shift key may be a problem for some users, but I rely mainly on the left shift key, so this never bothered me in the slightest. It’s not a deal-breaking sacrifice, but more of a slight learning curve when adjusting to a new keyboard. Speaking of learning curves, the BlackWidow V3 Mini does take some time to settle in.

The keyboard doesn’t feature a function row, but it makes good use of its Fn key. Pressing the Fn will switch of any lighting you have on and highlight any keys that provide a secondary function with a white light. The number row also serves a dual purpose of being F1-F12, but there are also side-printed functions for adjusting RGB brightness, your standard media controls, and macro recording. Outside of the RGB settings, the media controls and macro keys had absolutely no input lag. After a few days, I found myself right at home with all the nifty shortcuts on the V3 Mini.

Once I got over making silly little mistakes, the V3 Mini was a delight to use.

A 65% keyboard is a sweet spot for those who want a smaller keyboard, but aren’t willing to let go of their precious navigation keys. If you’re reliant on your Numpad, then this form-factor isn’t for you. Still, there were some tasks that the 65% form-factor made more tedious. It does take some time getting used to the new functions. The pause function, for example, is located right next to the function that puts your PC to sleep. A minor slip of the finger and your PC switches off, leaving you to have to manually turn it back on. These small mistakes tend to happen while learning how to use a new keyboard, but this is where I personally felt the smaller form-factor working against the V3 Mini. That being said, this form-factor did grow on me over time. Once I got over making silly little mistakes, the V3 Mini was a delight to use. Having a powerful wireless keyboard that can travel with me really turned into a first world privilege that will be sorely missed when I have to return the review unit. 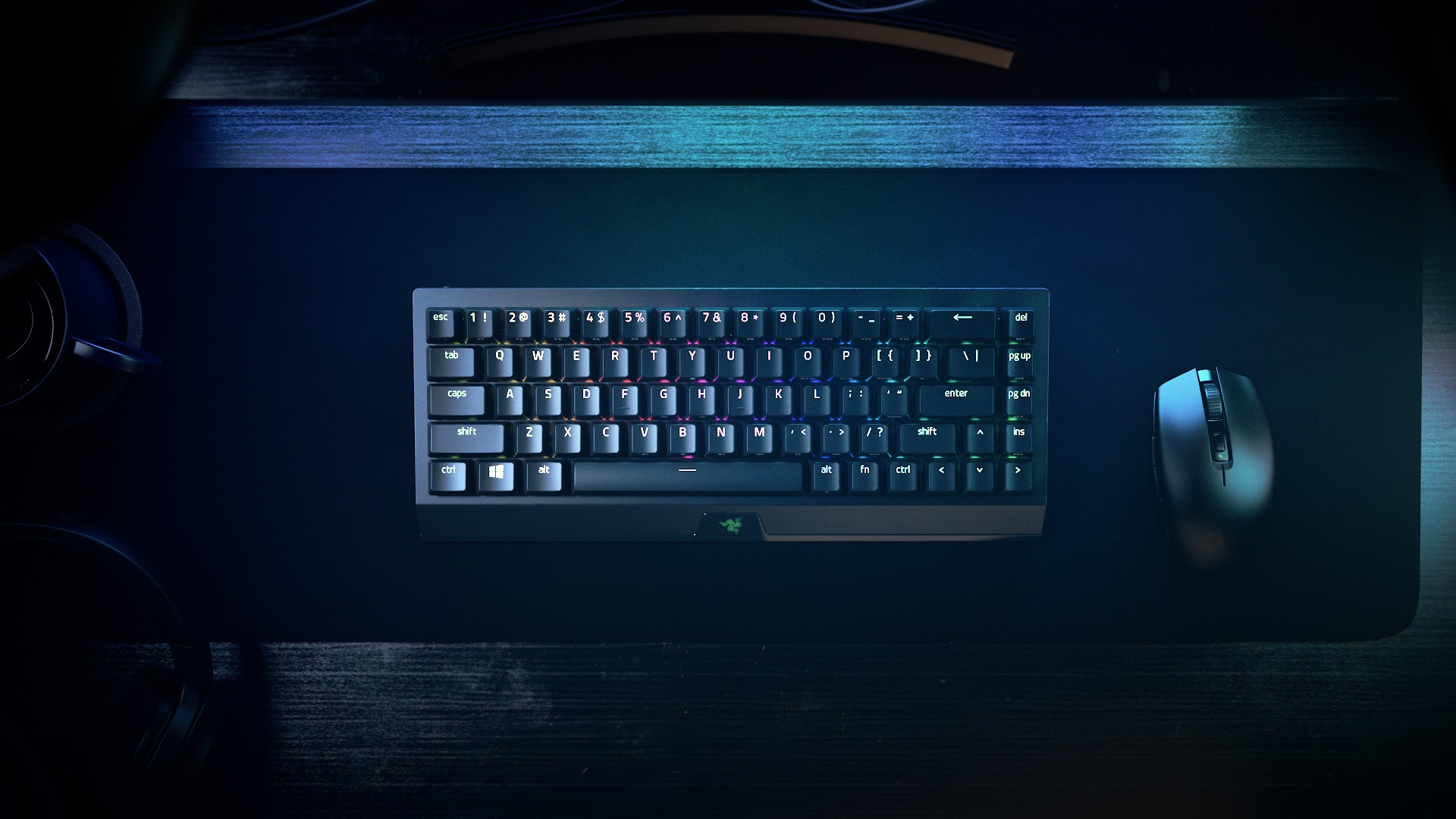 The BlackWidow V3 Mini also features flip-out feet that can either give you 6 or 9-degree elevation. I barely made use of the 9-degree option because the V3 Mini doesn’t come with an included palm rest. If I were to use this keyboard permanently, I would immediately invest in a compact wrist rest. Although, it would be nice to have one included, considering that this is a rather expensive piece of equipment.

That being said, it all comes down to how refined of an experience the keyboard can give. The BlackWidow V3 Mini comes with Razer Yellow switches with added sound dampeners, which really have been a delight to use. While I don’t have another keyboard that features Razer Yellow switches to compare this to, I can say that this keyboard has a noticeably quieter sound to that of other mechanical keyboards I have used. There is a soft clacking, which gives off an enjoyable form of white-noise, without reaching an inoffensive volume. However, it wasn’t all smooth sailing. While people in public spaces didn’t complain, I did notice a slight metallic pinging noise coming from the backspace key in particular.

The BlackWidow V3 Mini comes with Razer Yellow switches with added sound dampeners, which really have been a delight to use.

Gaming on the V3 Mini was rather impressive. The switches felt fast and responsive in almost every situation. The keyboard kept up with my inputs and the lighter switches were greatly appreciated after long gaming sessions. Thanks to Razer’s layout of the V3 Mini, using this keyboard felt less exhausting after long gaming sessions, and I found inputs easier thanks to the well-spaced keys. That being said, Testing the V3 Mini with teammates in a group called came with less noise complaints than usual. At least I wasn’t blamed for us losing the game (for once). Thanks Razer. 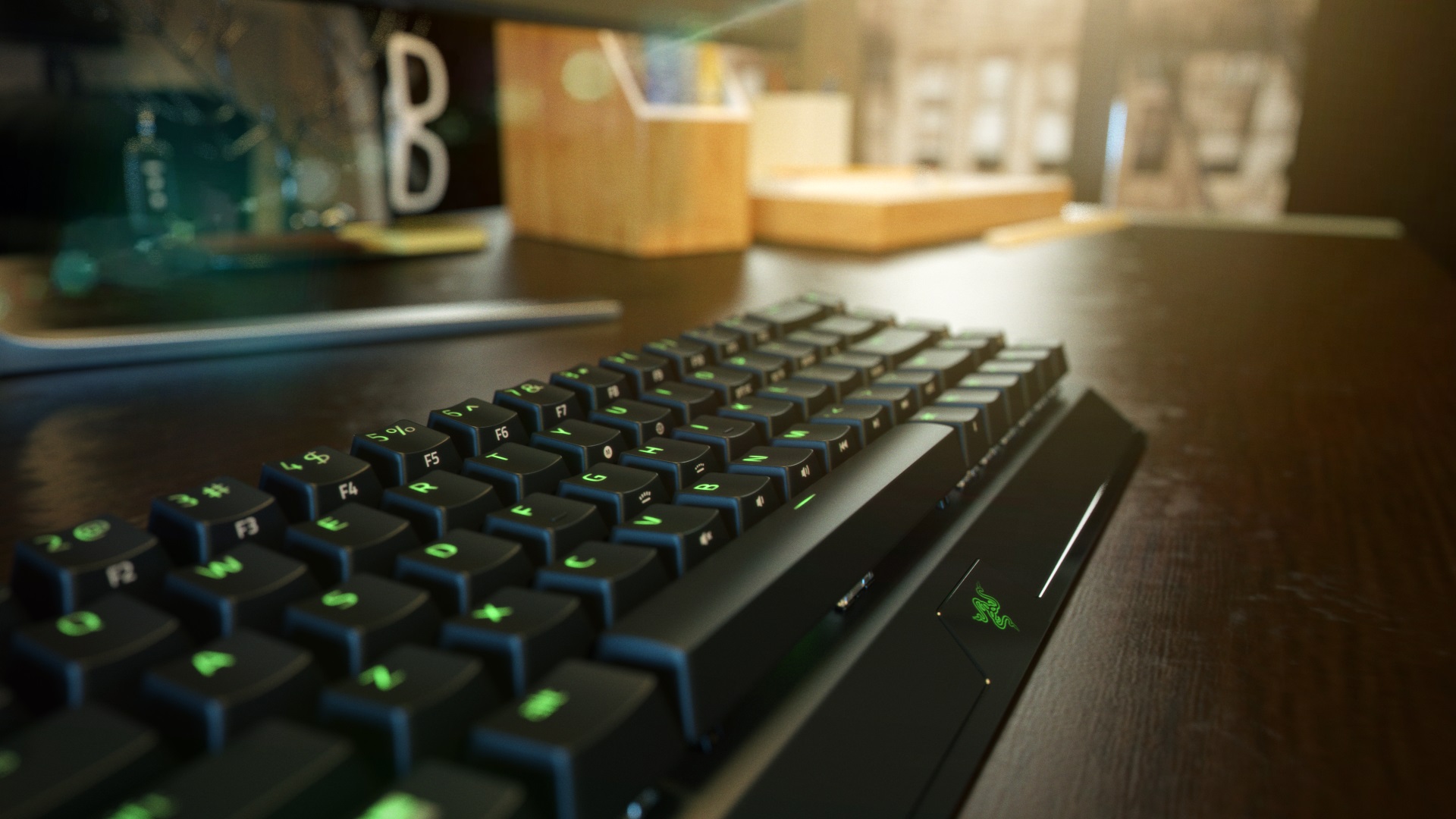 In terms of productivity, this will be dependent on your love for linear switches during typing. In terms of my usage, the BlackWidow V3 Mini made getting work done a lot less distracting. Once you get used to the keyboard’s smart layout and some muscle memory begins to form, there aren’t many complaints about the V3 Mini. The keycaps are comfortable, and while I do miss some form of tactile feedback, I could still get work done without any issues.

Thankfully, both the Bluetooth connectivity (which allows up to three PC connections) and the 2.4Ghz dongle were spectacular to use. There was virtually no input lag until the keyboard reached around 2% battery life. I wouldn’t recommend keeping the battery at under 5% to avoid the keyboard glitching out, but battery life will not be a major issue for the V3 Mini. Razer rates the V3 Mini for up to 200 hours of battery life without any RGB on. However, with my RGB brightness set to around 30%, I managed to get around 40 hours of usage regardless of whether I used the Bluetooth or the included dongle. That being said, it did take 3-4 hours to charge the keyboard from 0-100% battery, which wasn’t much of an issue for me. If you’re in a rush, the V3 Mini can charge up to 50% after 30 minutes, which does come in handy when you have to unexpectedly travel somewhere. 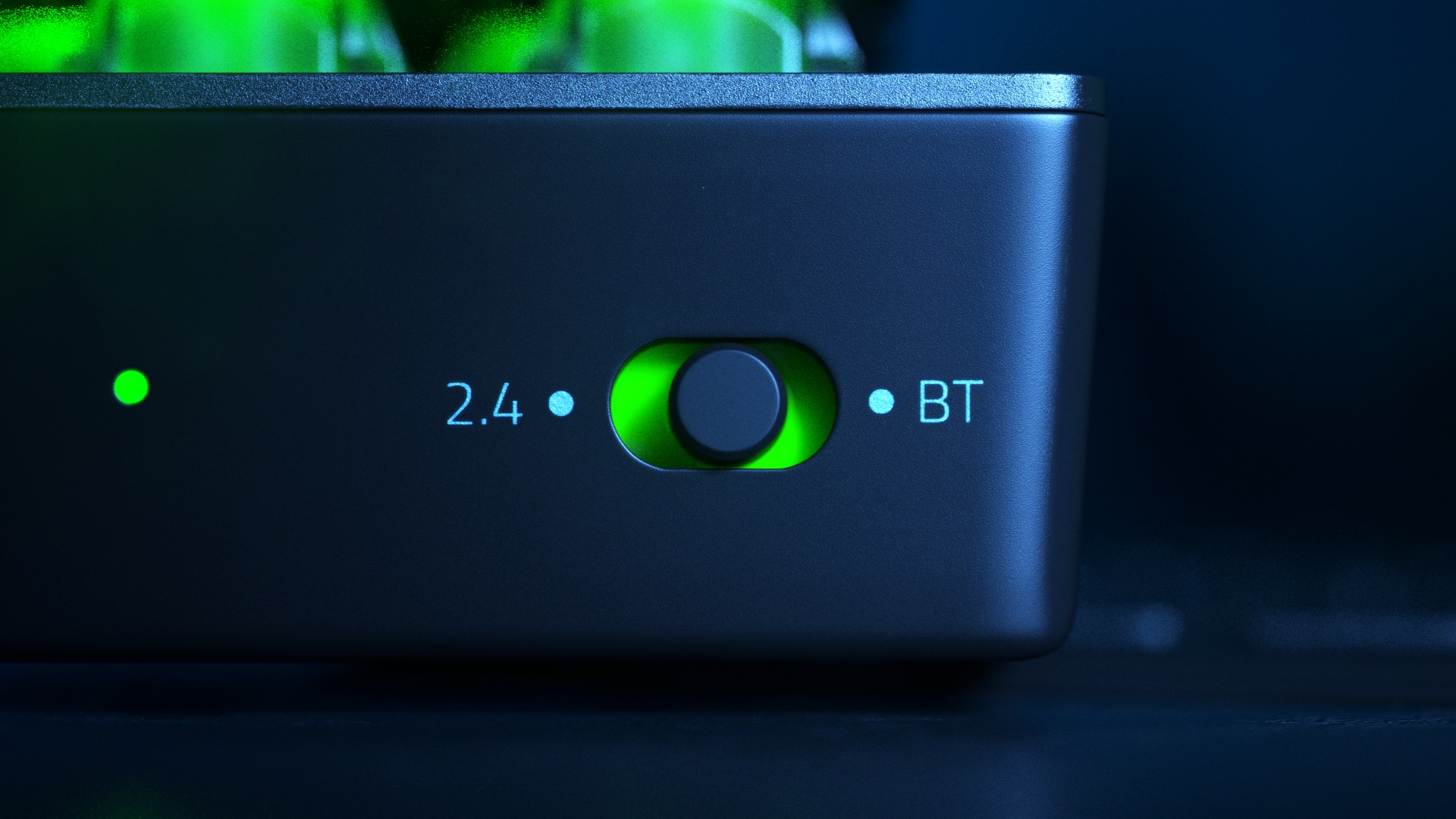 If you want to see your battery percentage, you will have to install Razer Synapse. This continues to be the go-to program of choice for Razer and it offers control over everything from the RGB to almost every key’s function. The V3 Mini does allow you to change the RGB using the Fn key, but those inputs are noticeably laggy and you will need to religiously look back at the instruction manual, as some of the inputs aren’t obvious to first-time users. I just preferred just using Synapse for all V3 Mini needs.

While this may be Razer’s first attempt at a 65% keyboard, the BlackWidow V3 Mini Hyperspeed embraces the brand’s tradition of high-end, high-functionality peripherals that come at the cost of a pretty penny. That being said, Razer has done a fantastic job with its layout and has packed it with more features than even necessary. If you can live without a numpad, there are very few competitors in this category that can go toe-to-toe with the Blackwidow V3 Mini’s featureset.