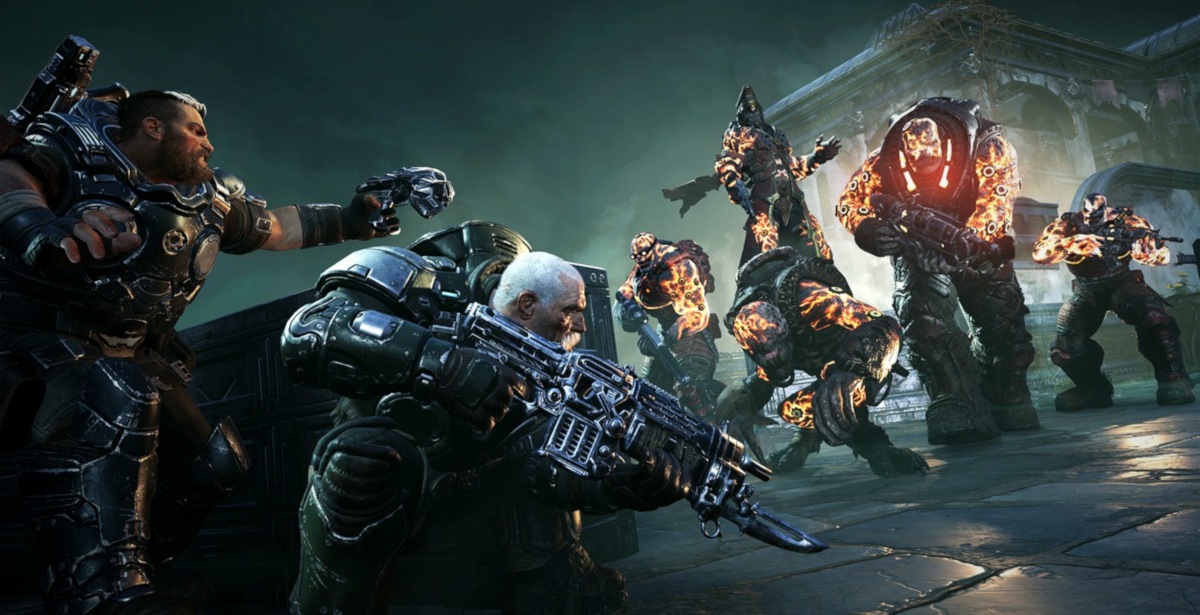 In April this year, Microsoft released Gears Tactics on PC - an isometric, squad-based, and turn-based tactical game that, contrary to my expectations, was a great fit for the IP and a lot of fun. The Gears of War games have always emphasized sticking to cover, drawing fire, and flanking enemies, basic gameplay elements that - with a couple Gears-flavoured tweaks - translate well into an XCOM-style experience.

Despite offering gamepad support on PC, we’ve had to wait until the launch of the Xbox Series S|X consoles to play Gears Tactics on both the last-gen and next-gen hardware. Thankfully, developers Splash Damage and The Coalition have used this time to include a new campaign mode, a new tier of equipment, and balanced campaign progression (with these new features coming to PC as well). As a result, this relaunch remains easy to recommend to both console players looking for an XCOM tactical fix, and Gears of War fans alike. 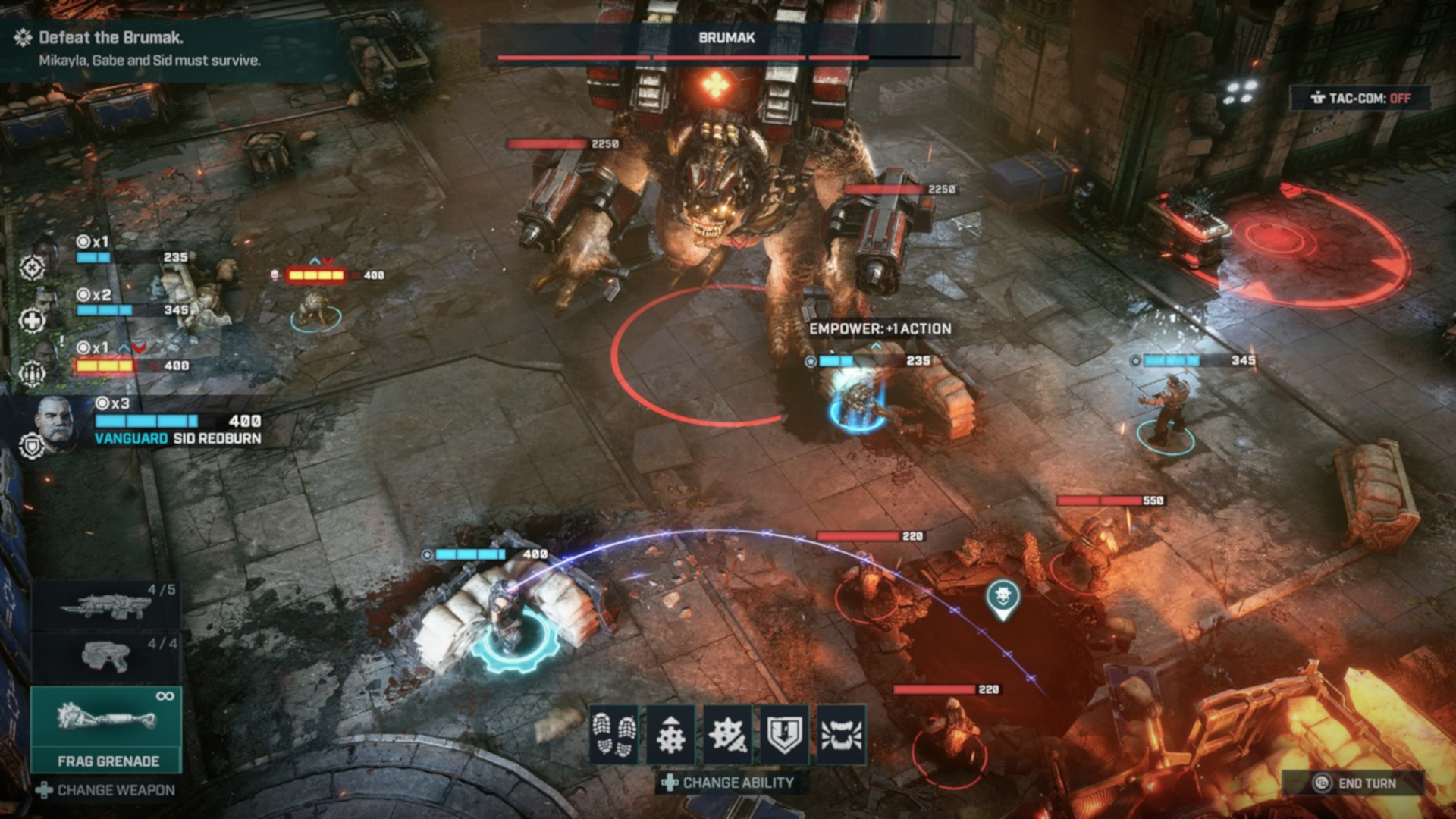 Gears Tactics is at its best when you're dealing with multiple threats and using the tun-based structure to carefully plan your way out of trouble.

In Gears Tactics, you take control of Gabe Diaz, a Gear veteran who demoted himself to the position of mechanic after clashing with command. Fans of the lore will recognise him as Kait Diaz’s estranged father, a narrative link that is coupled with an overarching mission delving deeper into Locust lore and the Collation of Government’s actions after their failed attempt destroying the locust with the Hammer of Dawn system. He initially teams up with Sid Redburn – another character whose name fans may recognise – before assembling a motley crew of COG and civilian survivors to hunt down the new antagonist Ukkon, a Locust bioengineer responsible for mutating native Hollow creatures into war machines like the Brumak and Corpser.

Thankfully, developers Splash Damage and The Coalition have used this time to include a new campaign mode, a new tier of equipment, and balanced campaign progression.

Gears Tactics has several unique gameplay elements but it doesn’t deviate too far from the classic XCOM gameplay loop. When you’re not required to take a hero unit on a mission (whose death will trigger a “game over”), the recruitable classes are pulled straight from Gears of War multiplayer modes but fill familiar genre roles. Scouts are great in close quarters, wielding shotguns that do massive flanking damage and can move further than other classes per-action. Heavies wield mulchers and excel at providing cover, gaining bonuses when hunkered down in one spot providing overwatch. Vanguards are your tanks, able to regain health each turn, give squad mates the ability to leech health, while packing a Retro Lancer for mid-range charges. Support characters are a leader/medic hybrid, wielding the iconic Lancer, healing grenades, and possess abilities that boost team effectiveness. Each has a skill-tree that branches in four directions, offering several specializations that make running a mission with two of the same class viable. 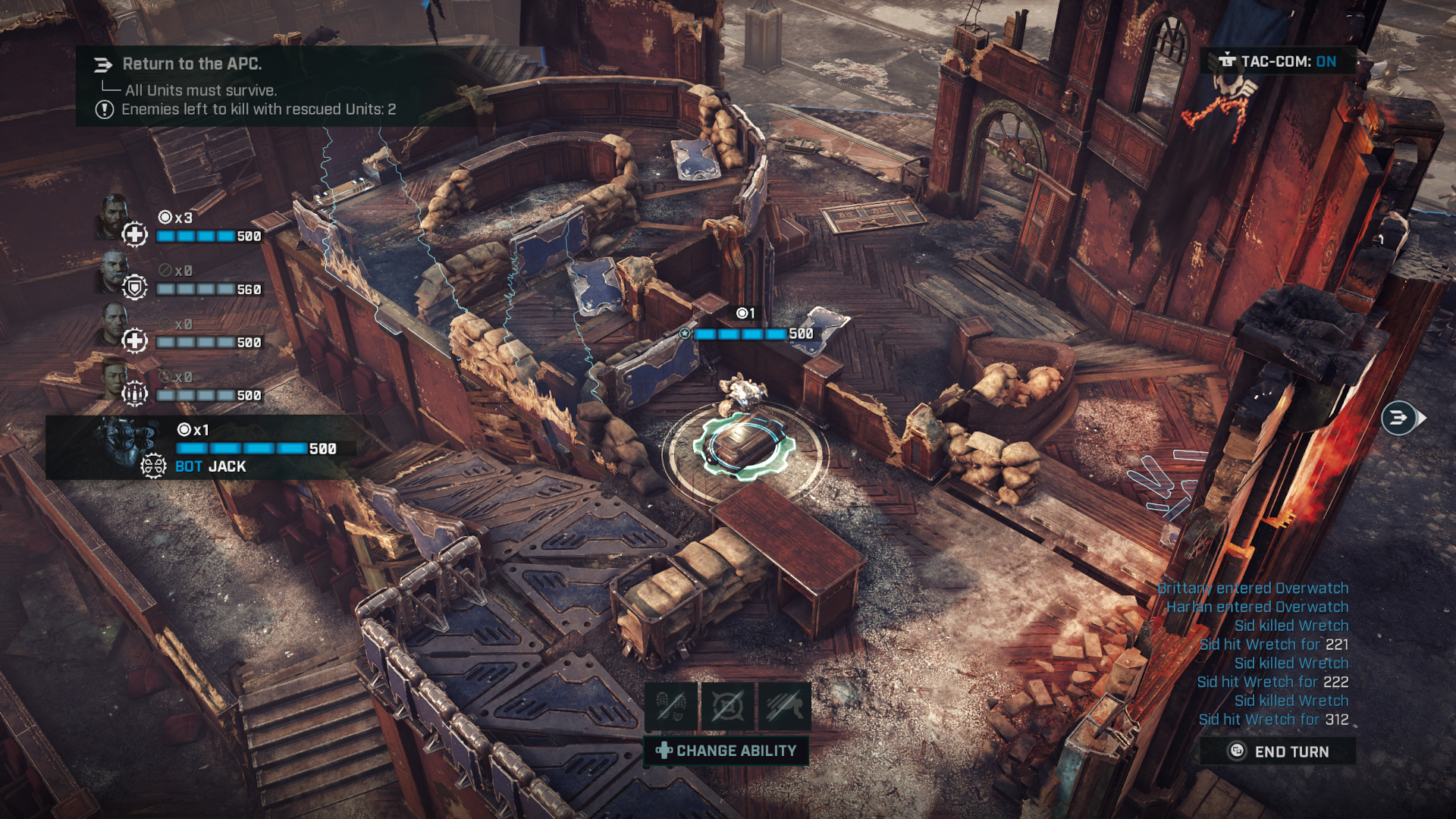 Personally, Jack's primary purpose was darting around the map hunting for equipment crates and scouting, using cloak to avoid trouble. However, for missions that require you to hold an area, his shield ability is a major boon.

To maintain the relentless pace the IP is known for, Gears Tactics provides each Gear three actions per turn by default. These can be used for any combination of actions. You can sprint across the map to flank enemies; toss a grenade to clear out a group of wretches and still put two lancer bursts into a bigger foe; or set up an overwatch zone that’ll trigger for as many actions as they have remaining. Gears Tactics gives you a lot to think about when you have to manage the partial- and full-cover system (which reduces the chance-to-hit and total damage), can plant grenade traps to cover your flanks, can execute downed enemies to grant your companions a bonus turn (and other skill-based perks), or use the Stub pistol to disrupt enemy overwatch.

With so many abilities to synergise, skillful players can optimise each turn to give their Gears a devastating number of actions, ending massive encounters far quicker than you’d expect. However, you need to be aware this flexibility applies to your foes as well and it’s easy to have your Gears swarmed and killed off if they stray too far from the team. The high number of actions per-turn also plays into several high-intensity missions, which can task you with advancing across a map to avoid creeping artillery strikes, rushing capture pods to free Gears before they’re executed, or tackling a giant creature backed up by lesser minions. 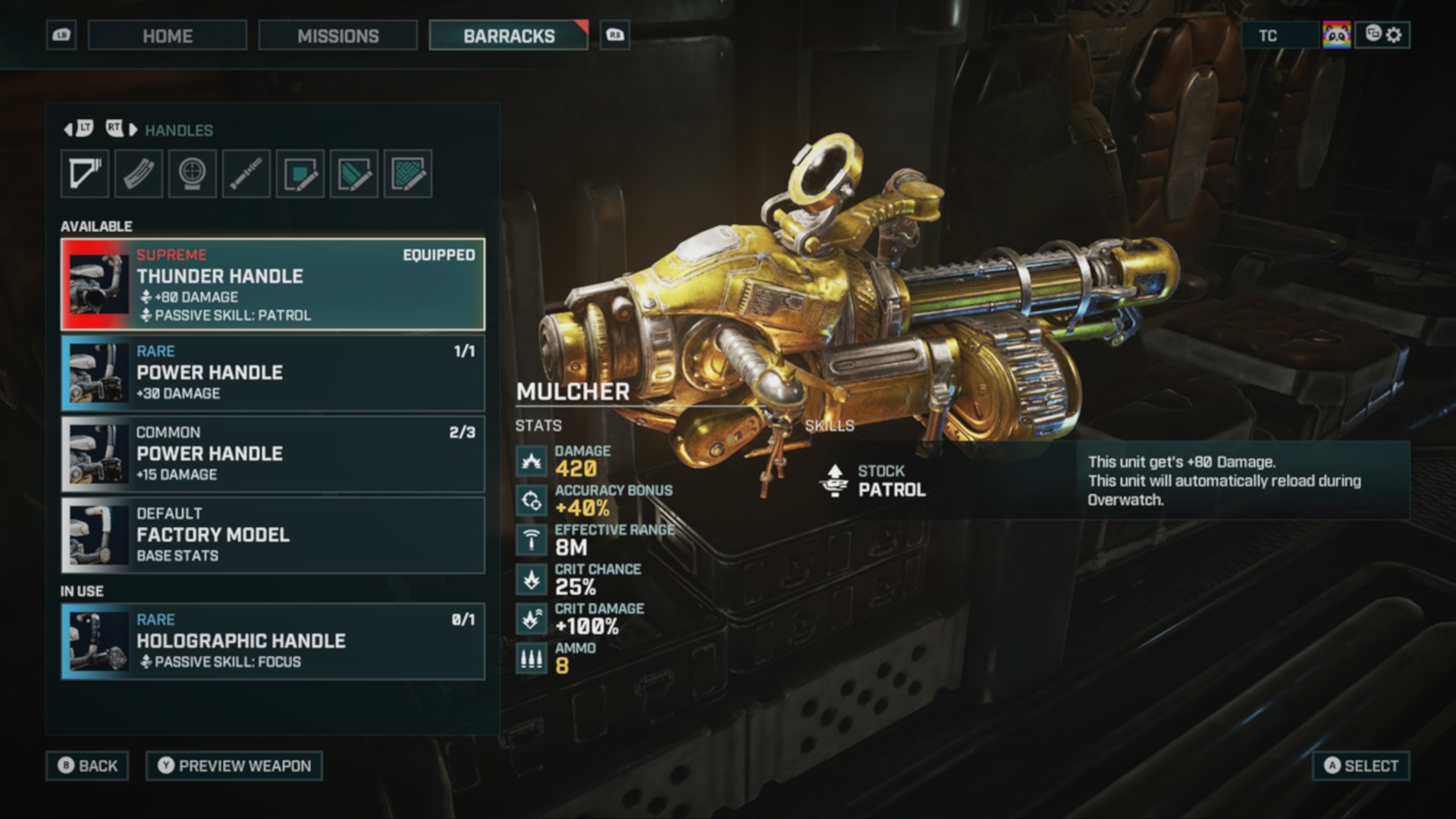 Supreme-tier equipment makes mission challenges worth the risk and they feel essential for surviving higher difficulties.

For new or returning players, the “Jacked Campaign” mode is a great place to start, providing you with both boons and new challenges. The ever-present companion bot Jack will join your team early on and is always available to the squad without taking up a slot in your mission roster. Despite lacking direct combat options, he can be upgraded along several paths, two paths that buff and shield your team, two paths that debuff and cripple your foes. His default ability to cloak is also useful if you’re just after a scout or need to send a team member away from the group to grab crates that may contain new Supreme-tier equipment.

The ever-present companion bot Jack will join your team early on and is always available to the squad without taking up a slot in your mission roster.

To offset these perks, the Jacked Campaign mode also introduces “Deviant” enemies, which are either incredibly tough or buff their companions. A deviant wretch moving forward with its pack is only a slight annoyance if you prioritise targets, however, a Locust Sniper or Kantus sticking to the backlines can be a real pain to hunt down. It doesn’t drastically change up the flow of the campaign or warrant a change in score, but it provides even more tactical options that are always appreciated in this genre. 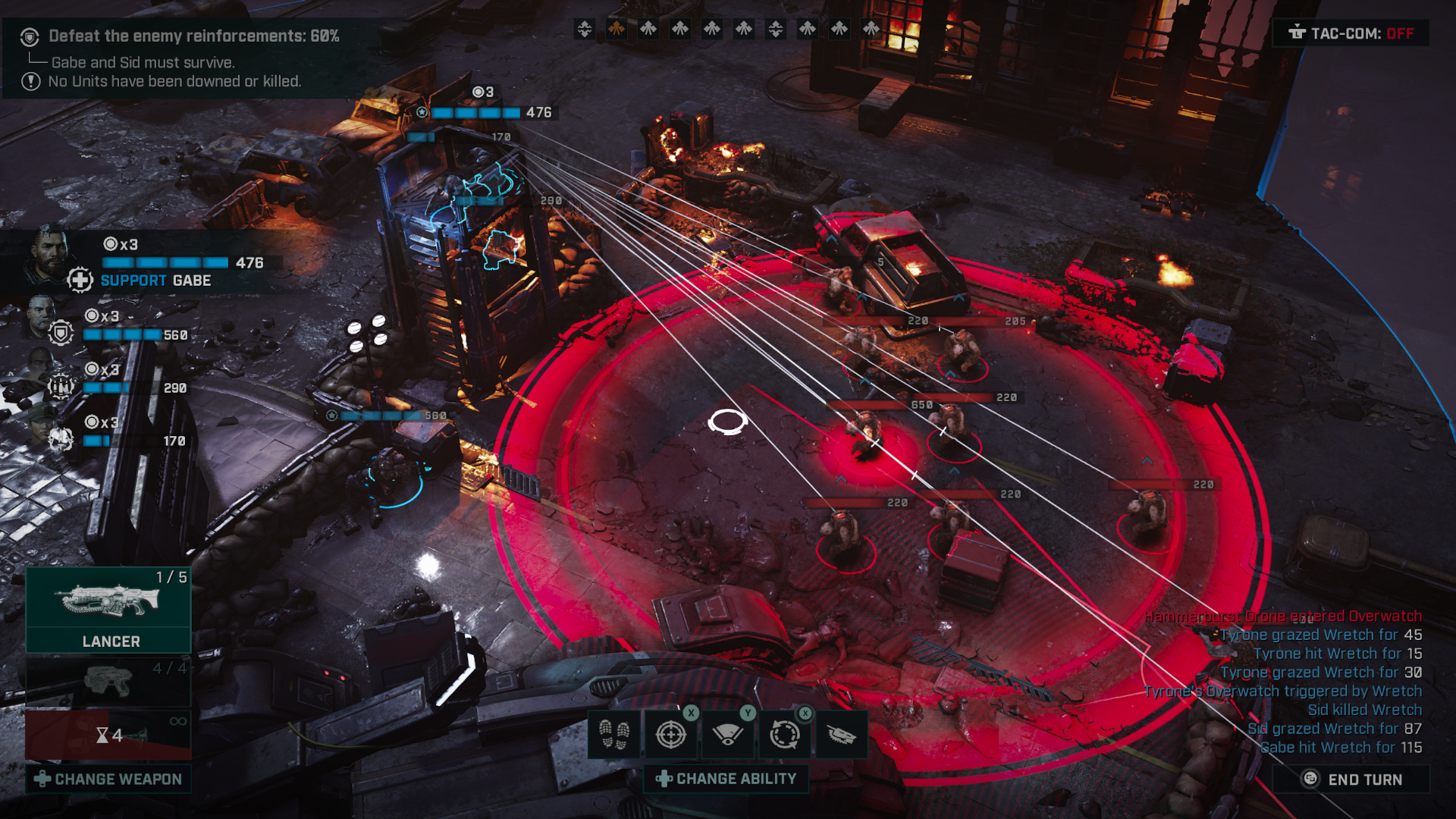 Melee-centric "deviant" foes are always the easiest to deal with (I'd recommend grenade spam), while those that stay at the rear will force you to push through enemy lines or make some risky flanking maneuvers.

What the console release of Gears Tactics hasn’t solved is the bland mission progression – which is still dragged down in the final act by some mandatory side mission requirements – and clunky equipment and team management with a gamepad. There’s still no overview map that gives a sense of where you are on Sera as the campaign progresses, so you’re simply dropping into battle after battle from a menu. Talking of menus, once you’ve recruited several Gears and unlocked more equipment – either from looting or completing mission challenges – it starts becoming a pain to flick through multiple equipment menus and sub-menus (though some might find the ability to cosmetically-customise the hell out of everything a positive).

The last thing to touch on is the presentation and performance, which was already solid and, aesthetically, complemented the third-person Gears of War games. The cutscene quality and direction are excellent, including the simple intros and outros for side missions. On the next-gen consoles, the transition to an isometric viewpoint and distant characters is less jarring as all visual settings equivalent to the maximum settings on PC (with some tweaks, of course). Although not essential in this genre, my budget Series S still locks to 1440p/60, which makes the elaborate movement and combat animations look incredibly fluid (executions being a highlight). Series X owners get the choice between a more visually striking 1440p/60 or 4K/30 modes. Xbox One S|X owners get a stable 1080p/30. 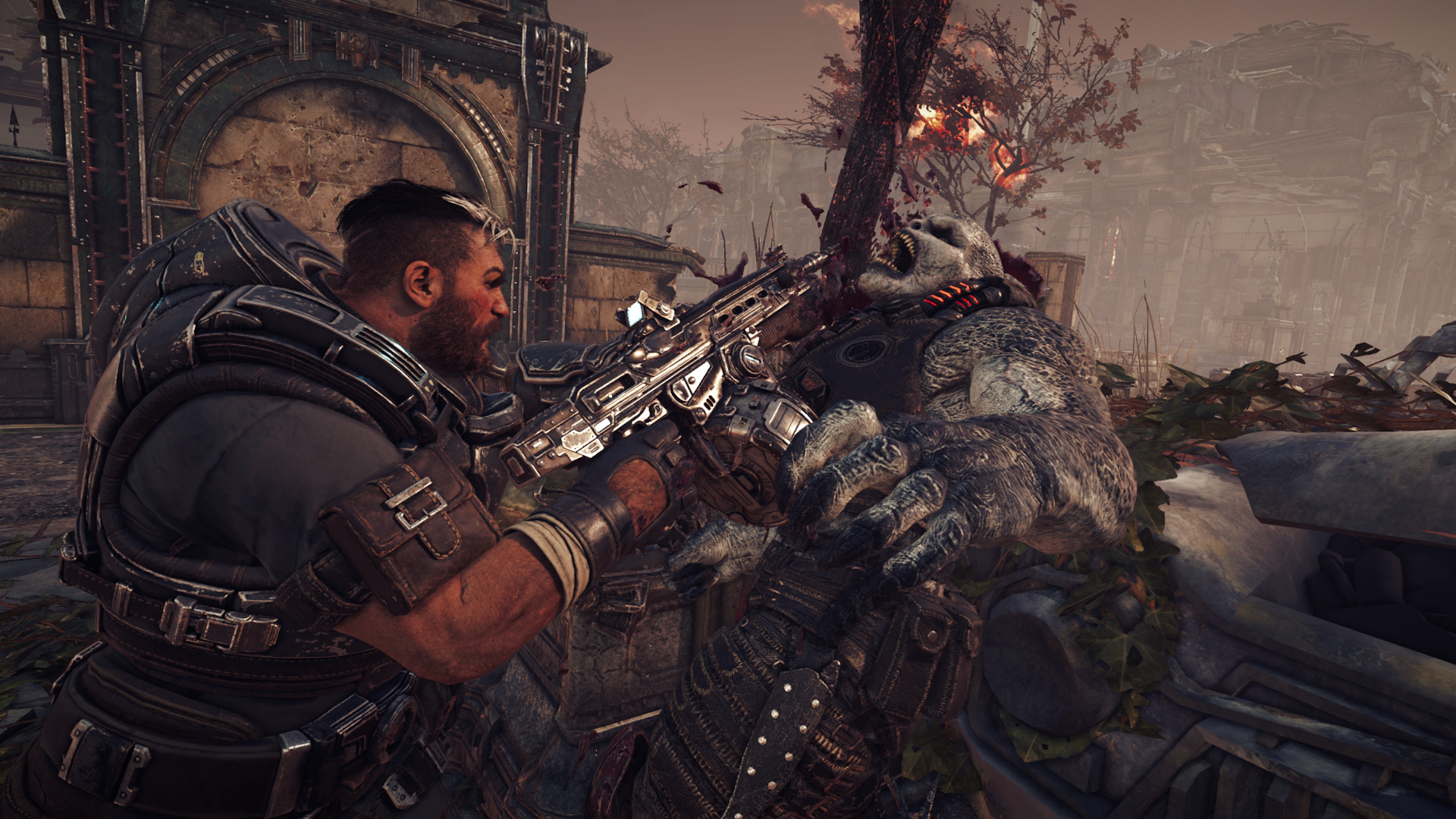 When the camera pulls close for a Lancer execution, Gears Tactics looks every bit as good as its third-person siblings.

If you’re a fan of turn-based tactical games, Gears Tactics offers an experience on-par and sometimes better than games like XCOM 2 and Mutant Year Zero: Road to Eden. Sure, managing your convoy and recruits is much simpler than XCOM’s elaborate base building and panic levels but, once the combat starts, it feels simultaneously more flexible and tactical. That deep, tactical gameplay, paired with high production values and excellent performance on all consoles, make Gears Tactics is a great fit for the IP and a much-needed, quality console-exclusive for Microsoft. If you can’t stand turn-based strategy, go watch the cutscenes on YouTube to take in the new lore; those that do should consider this essential (especially if you already have an Xbox Game Pass sub and can access it now).
8

A great fit for the Gears IP

Expands on the lore

Looks and runs great on consoles

Inventory and team management can be a pain with a gamepad