Shut the duck up and keep moving. 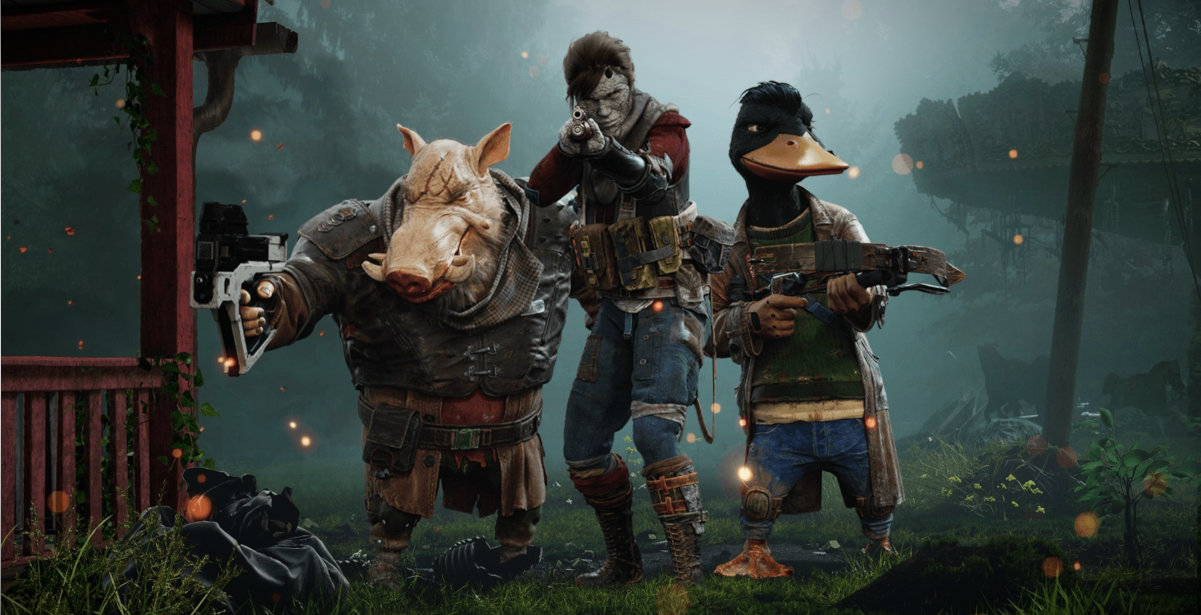 A party of three slowly crept through a wetland, scavenging scraps and parts to upgrade their own meager equipment. Boots caked with mud and senses ever-heightened, the party of Stalkers pressed on through the drenched landscape. A short distance away, they noticed a glimmer of light piercing through the oppressive darkness of the night. Dux, the sharp-eyed mutant, approached the strangely shimmering item. It was in a white box - as white as the conditions allowed for - and attached to it was two long sinewy 'strings'. The three mutants broke out in banter regarding the peculiar item. Salma, the newest addition to the party, explained that she heard tales of how people used to use these "fruit machines" to listen to music in the past. Borman, the stoic boar mutant, shot down this tale, insisting it was foolish. The item, of course, was a clever reference to an Apple iPod. It was during this small moment, offering only a minor addition to the lore, that I knew I absolutely adored Mutant Year Zero: Road to Eden. 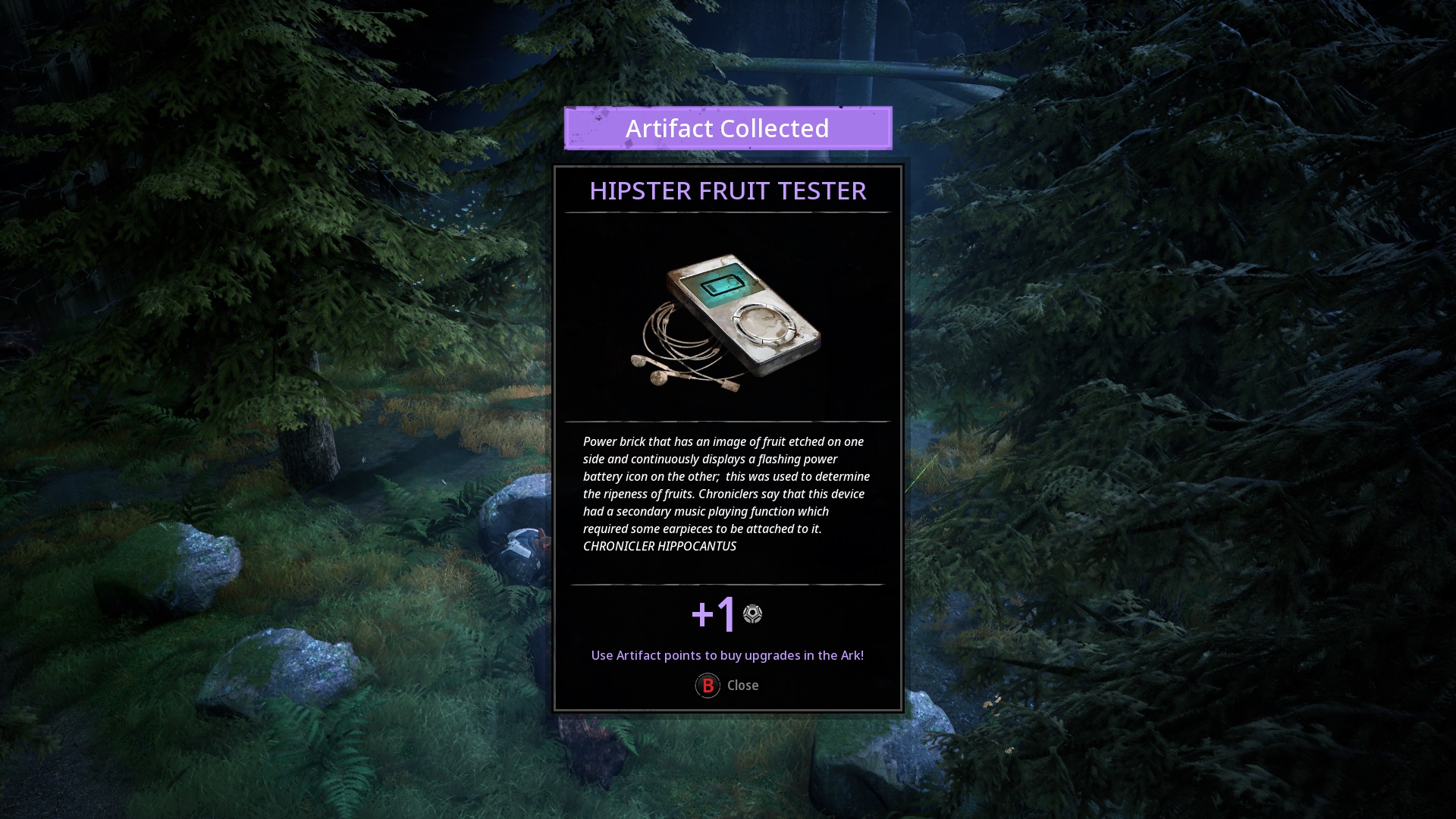 Mutant Year Zero: Road to Eden is a tactical-adventure game, which takes place in a world ravaged by both natural disasters and man-made fallout. Those who survived these events call the Ark their home. Here, in the last safe haven, everyone is a mutant, except their leader, the Elder, who educates and guides mutants into the Zone. Mutants who venture out and scavenge in the Zone are called stalkers, a.k.a. the mutants that keep the Ark operating and its inhabitants - surviving. So as to not spoil anything in the game, I'll not touch on any of the story points. One thing I must admit though is that the story is written with enough confidence to carry you through its length without getting bored. Heck, you might even snicker a good few times throughout your journey.

With all the tactical games flooding the market as of late, Mutant Year Zero: Road to Eden provides a fresh and enjoyable take on the genre.

Mutant Year Zero: Road to Eden mixes familiar turn-based tactical combat with fluid exploration, stealth, and strategizing. With all the tactical games flooding the market as of late, Mutant Year Zero: Road to Eden provides a fresh and enjoyable take on the genre. Not open-world at all, the game is rather divided into levels, each containing a few enemy encounters, parts to scavenge, scraps to collect, and items to loot. Mundane tasks for a game featuring exploration, sure, but the item looting and combat are there to make up for it. 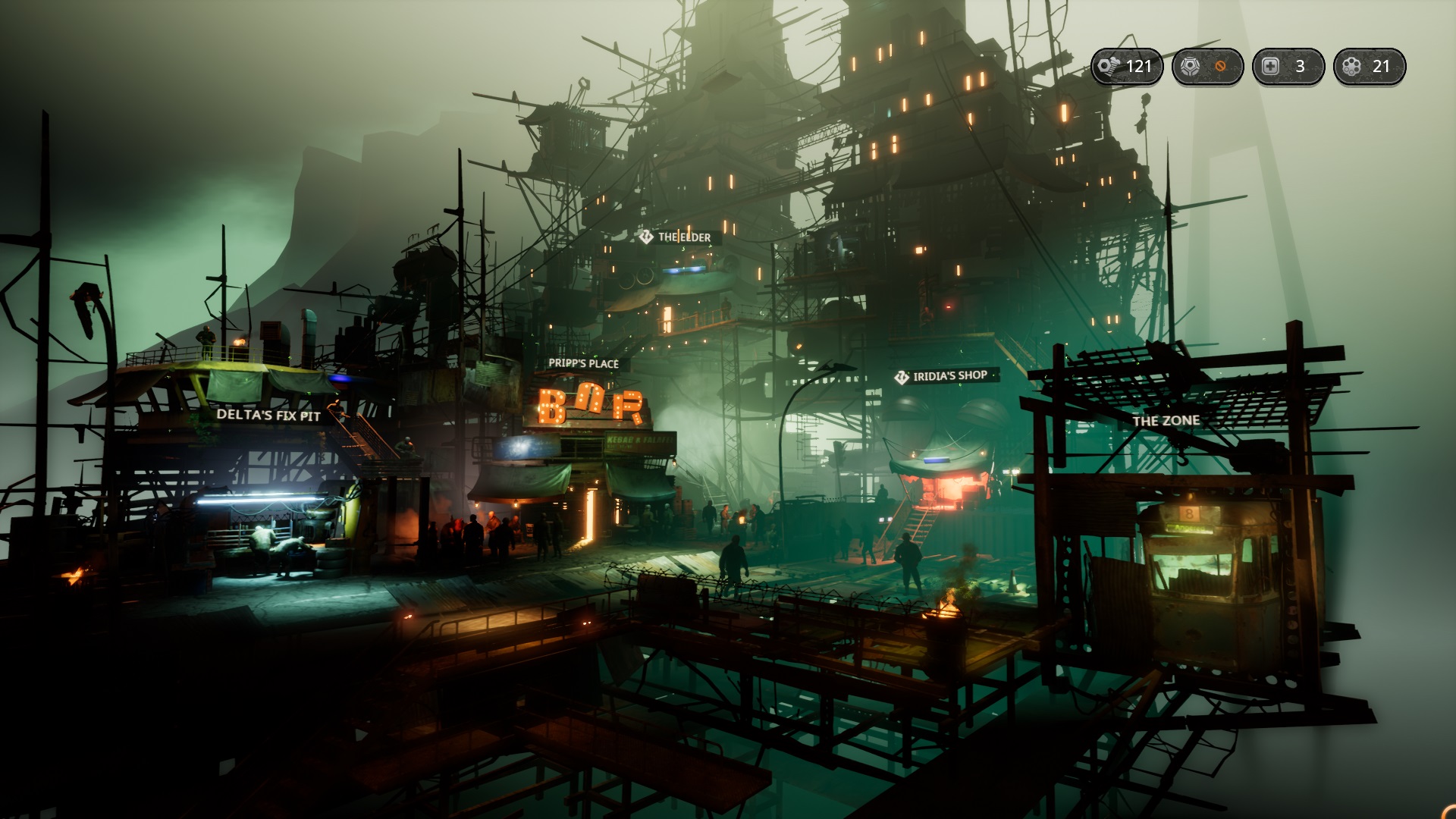 Items come in the form of weapons, armor, hats, grenades, weapons modifications, etc. all of which feel important, in a way that had me mulling over their properties and to whom I would assign them to. While exploring, I did experience some movement issues on my travels. At times, my party members could not walk over a simple obstacle, something as simple as a fallen lamppost, laying flat on its side. It's by no means a game-breaking issue, but it became a hindrance when it happened for the dozenth time. Luckily, bugs like these can easily be patched and corrected.

Adding to the world-building, you'll find plenty of notes scattered through the world and many are down-right awesome. A particular note of a man confessing the demise and "old-switcheroo" of his wives turtle hand me laughing out loud.

Easily the best mechanic in Mutant Year Zero: Road to Eden is the ability to fluidly sneak around stationed enemies and choose how you want to handle the inevitable clash.

When not busy collecting all manner of helpful or entertaining items, you'll be locked in combat. A typical combat encounter consists of a few steps: 1) Encounter enemies. 2) Sneak about to eliminate any isolated enemies. 3) Circle round and position your mutants in the 'perfect' ambush position. 4) Try and execute your ambush as best as possible. 5) Loot area.

Sounds too simple? Believe you me, it's not, at least not in practice. Easily the best mechanic in Mutant Year Zero: Road to Eden is the ability to fluidly sneak around stationed enemies and choose how you want to handle the inevitable clash. Sending patrolling ghouls to an early grave thins out the heard and this, in turn, makes the encounter against stationary enemies easier.

Enemy types are also varied and keep you on your toes. Butchers are useless at long range but can deal massive melee damage, whereas hunters are the exact opposite. Pyro's antagonize your rag-tag stalkers with Molotovs, while the immensely annoying "heal-bot" revives downed enemies. I can seriously not emphasize this enough - heal-bots are horrible things, kill them ASAP. Combat, at its core, is still turn-based tactical combat done by the book, but the big difference is the mutations you can unlock - which brings me to my next point. 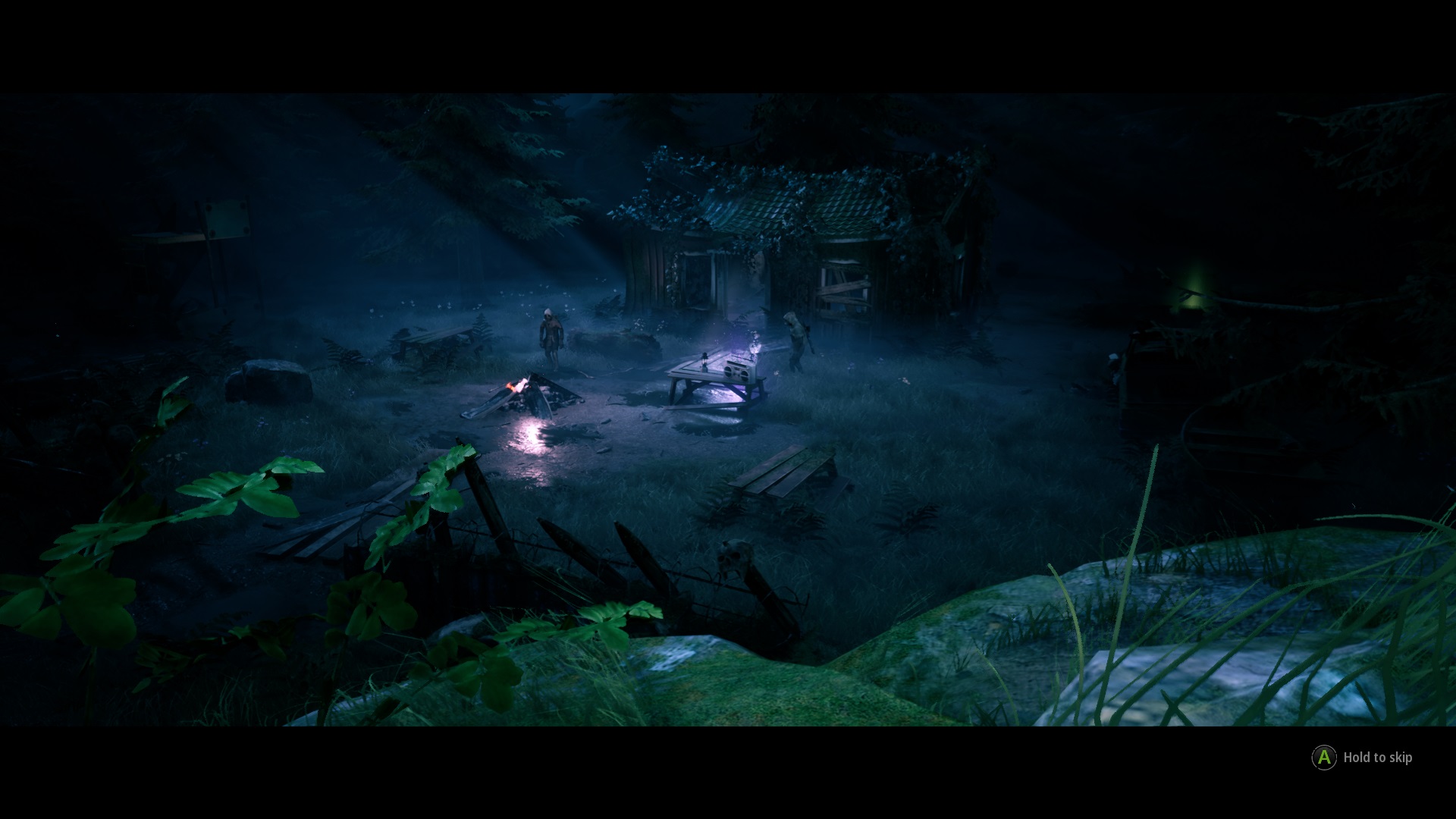 When leveling your stalkers in Mutant Year Zero: Road to Eden, you gain skill points. These points can be spent on either passive skills or mutations. Passive skills differ between each mutant, with some increasing your health, some increase a mutants movement distance for each turn, and some even increase the range of your grenades. These skills can provide a slight tactical advantage for your mutant and party.

Mutations, on the other hand, can give you a massive advantage if used correctly. The most popular one, and one you've no doubt seen in-game trailers, are the wings that Dux can sprout. When used, Dux will hover, giving him better accuracy and hit targets behind cover. Combine this with a weapon mod that gives higher damage and accuracy when elevated above enemies, and you have a great combo. Borman's "Hog Rush" can also be a lifesaver, charging at an enemy, knocking them down, and disrupting their turn. Mutations are great and, when used in conjunction with the right weapon mods and stats, downright devastating.

Where Mutant Year Zero: Road to Eden trumps the competition, though, is in its characters. You do not have an endless supply of rookie soldiers to fight for you. You start with two mutants, Dux and Borman, and meet a handful of others along the way.


Similarities between Mutant Year Zero: Road to Eden and XCOM are obvious, from the turn-based combat to the usual chance-to-hit stats. Where Mutant Year Zero: Road to Eden trumps the competition, though, is in its characters. You do not have an endless supply of rookie soldiers to fight for you. You start with two mutants, Dux and Borman, and meet a handful of others along the way. That's it. Each character, through their writing, feels like a unique individual, organic in the world. Once your entire party is wiped out, it's game over; there's no faceless mass of mutants to recruit from. This raises the stakes in each combat encounter, but also forces you to consider your strategy carefully. Each mutant matters - now more than ever.

Mutant Year Zero: Road to Eden is a solid entry in the turn-based tactical combat genre, bringing with it a mash-up of mechanics which results in a fresh and enticing experience. Aside from a few movement bugs and no progress tracker for items in each area, the game looks, sounds, and plays great. Players looking for an entry point into the genre need not look any further, while veterans seeking a fresh take will not be disappointed. Mutant Year Zero: Road to Eden will be, from now on, my benchmark for tactical turn-based combat games.
9

vortex6671
@MeisaOkumura. It's the same game. The Steam price is an absolute steal.

Cause super cheap on steam if yes

vortex6671
@Blaze. It really is a good game. I never really felt frustrated when playing it, at least not the frustration I feel when playing XCOM.

Blaze
Putting this on my must-play games this month.