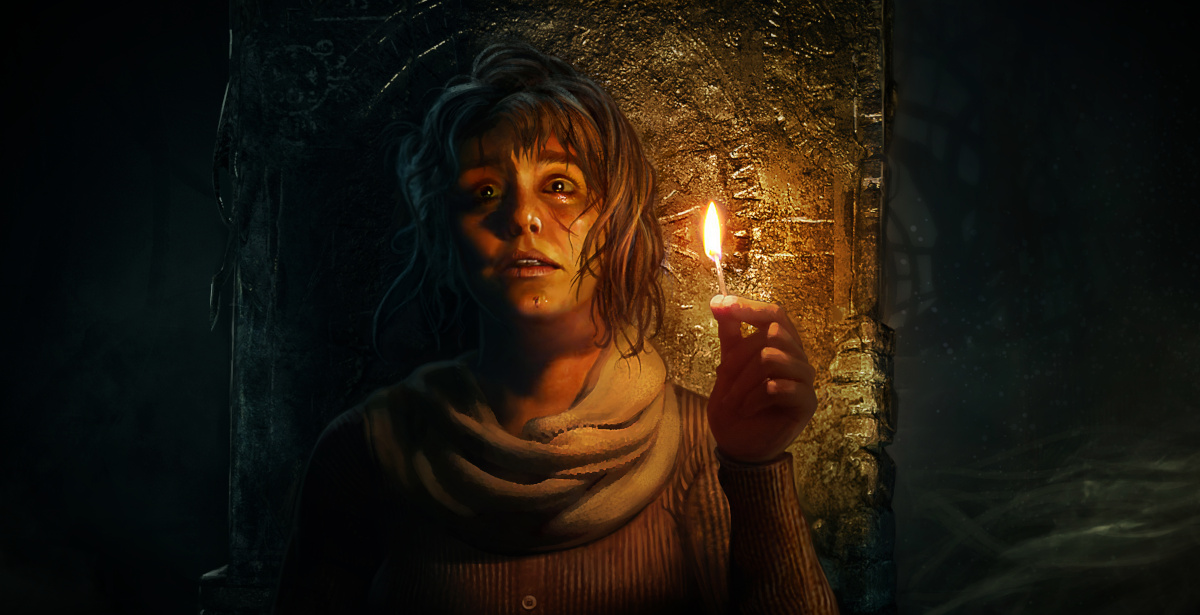 Frictional Games’ Amnesia: The Dark Descent demonstrated that you could create an engaging horror game – with a focus on stealth, item management, puzzles, and an oppressive atmosphere – while leaving the player completely powerless against the creatures that roamed the dark halls. The loosely-connected sequel Amnesia: A Machine for Pigs, was developed by The Chinese Room instead, ditching the item management and scaling back encounters to focus on the narrative. Frictional Games’ finally returned for the structurally-similar but narratively-unconnected SOMA in 2015, which also had its share of jump scares but focused more on the horrifying and often unconsidered consequences of several sci-fi concepts. 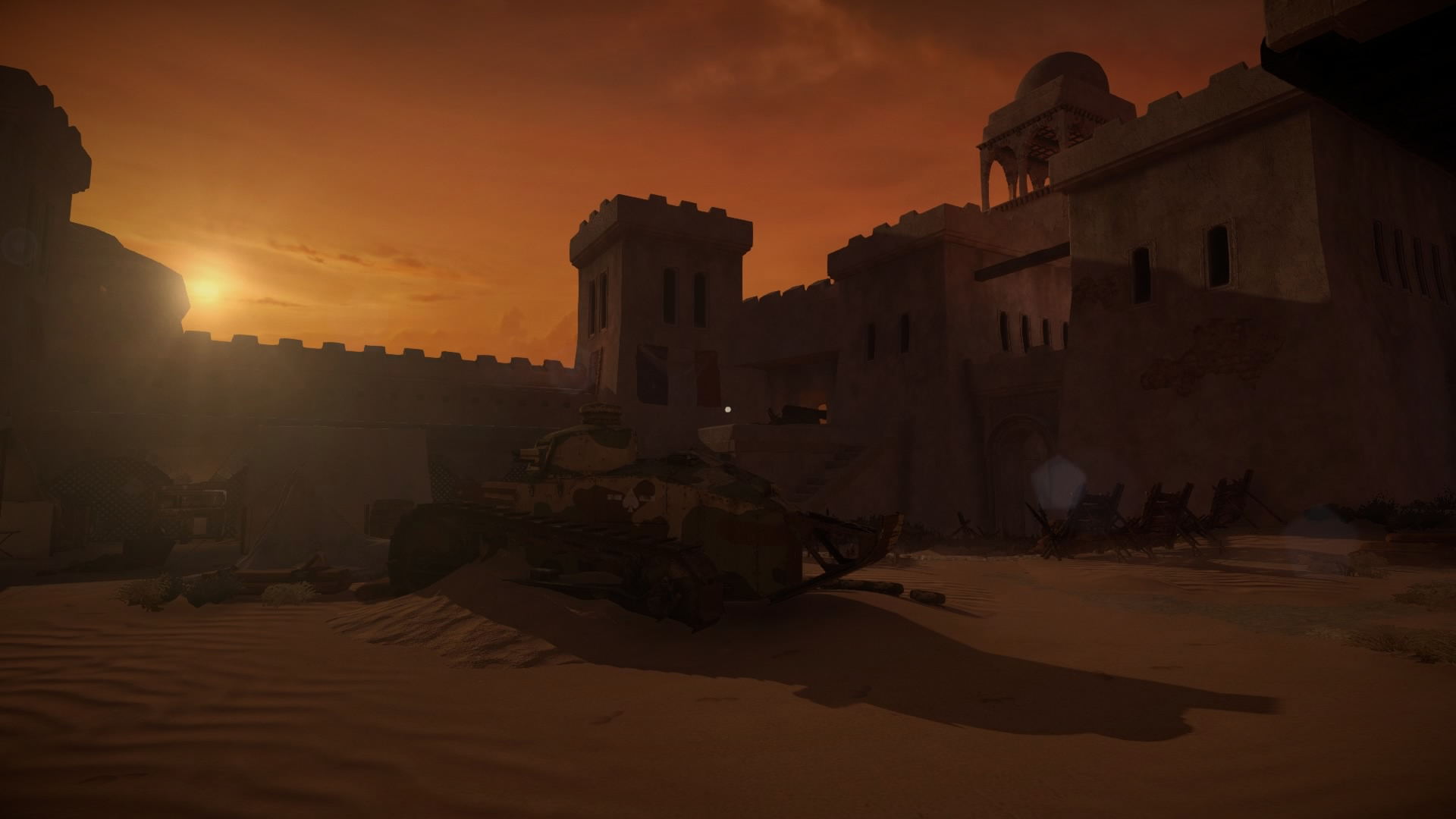 Amnesia: Rebirth has several levels set outside, which provide a brief reprieve from the horror, atmospheric backdrops, and often serve as hub areas for multi-part puzzles.

Design-wise, Amnesia: Rebirth falls somewhere in the middle. It reintroduces resource management and ups the number of creature encounters, but still places the narrative and menacing atmosphere front and centre. Set in 1937 – almost 100 years after The Dark Descent – Tasi Trianon, her husband, and a diverse crew accompanying their archaeological expedition, are flying over French-controlled Algeria when a massive storm brings down the plane. Tasi wakes up in the wreckage of the plane and sets out to find her hubby and missing team. She slowly remembers that she’s already travelled with them through several locations, only able to recall fragments, and she's 1-month pregnant. It’s a smart setup that makes Tasi’s traversal across the desert above, the ruins below, and several detours through an apocalyptic alternate dimension even more stress-inducing.

Slowly but surely you’ll stumble upon the remains of the crew, not all of whom are dead, and experience flashbacks that unravel the mystery of the last few days.

Slowly but surely you’ll stumble upon the remains of the crew, not all of whom are dead, and experience flashbacks that unravel the mystery of the last few days. Between levels, loading screens reveal Tasi’s tragic past, vital to understanding her motivations in the present, just as Daniel’s past activities were slowly unravelled in The Dark Descent. Talking of Daniel, Amnesia: Rebirth directly references those events, expanding on the lore behind the mysterious orbs and the terrible cost of using them to gain power. As such, I’d recommend playing The Dark Descent first to get the most out of the story (though it’s not essential). A final note on the narrative, Amnesia: Rebirth feels geared towards players with children. It’s easier to empathize with Tali’s predicament, understand her motivation for pushing on, and appreciate that noble self-sacrifice is not always a straightforward choice. 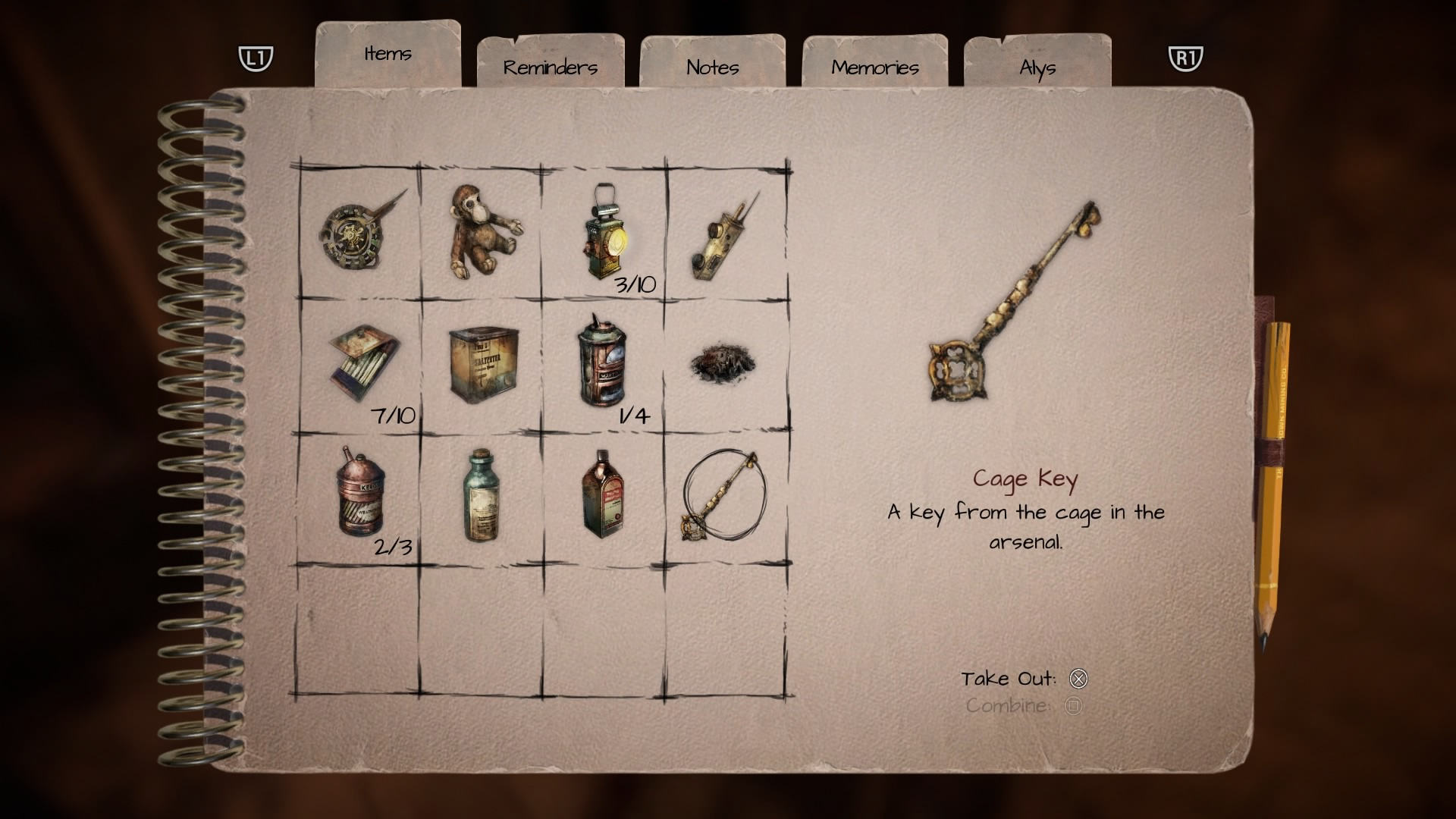 You’ll never have to juggle an excessive amount of puzzle items or consumable resources, but the return of inventory management adds another layer of complexity and encourages you to explore the dark corners of each level for supplies.

I loved the unravelling narrative, especially with several gut-wrenching endings to consider, but the gameplay in Amnesia: Rebirth has barely evolved since 2010. It's not necessarily a bad thing, as the lumbering sense of movement and clunky interaction mechanics – hold a button to grab, move the analog stick to manipulate – works to ramp up the tension when you’re fleeing from a hideous creature, trying to slam doors and slide locks behind you. It also makes rummaging around the environments for key items or consumables – typically lamp oil and matches – feel more organic and panicked, especially as you’ll spend a lot of time creeping through the dark, looking for torches to illuminate your surroundings.

...the gameplay in Amnesia: Rebirth has barely evolved since 2010.

Darkness, aside from generating an oppressive atmosphere, plays a big part in exploration and stealth. Tasi’s “sanity” slowly decreases in the dark, leading to visual hallucinations and making her panic. However, your foes are all but blind in the dark, so moving swiftly through the shadows is essential to avoid detection. It’s a balancing act that adds a layer of complexity to the relatively simple stealth mechanics. Mercifully, Amnesia: Rebirth provides the ability you to soothe your unborn child when you feel contractions, an action that calms Tali and often triggers dialogue that’ll either expand on her backstory or provide a hint at what to do next.

When it comes to puzzle-solving, some item manipulation is required but most key items go straight into your inventory, ready to be used on other objects later, point-and-click style. There are also several set pieces, typically escape sequences that require you to stay out of patrol routes or simply run. As with prior Amnesia games, there is no way to “die” in Amnesia: Rebirth but being caught or succumbing to fear in the darkness can modify several endings. 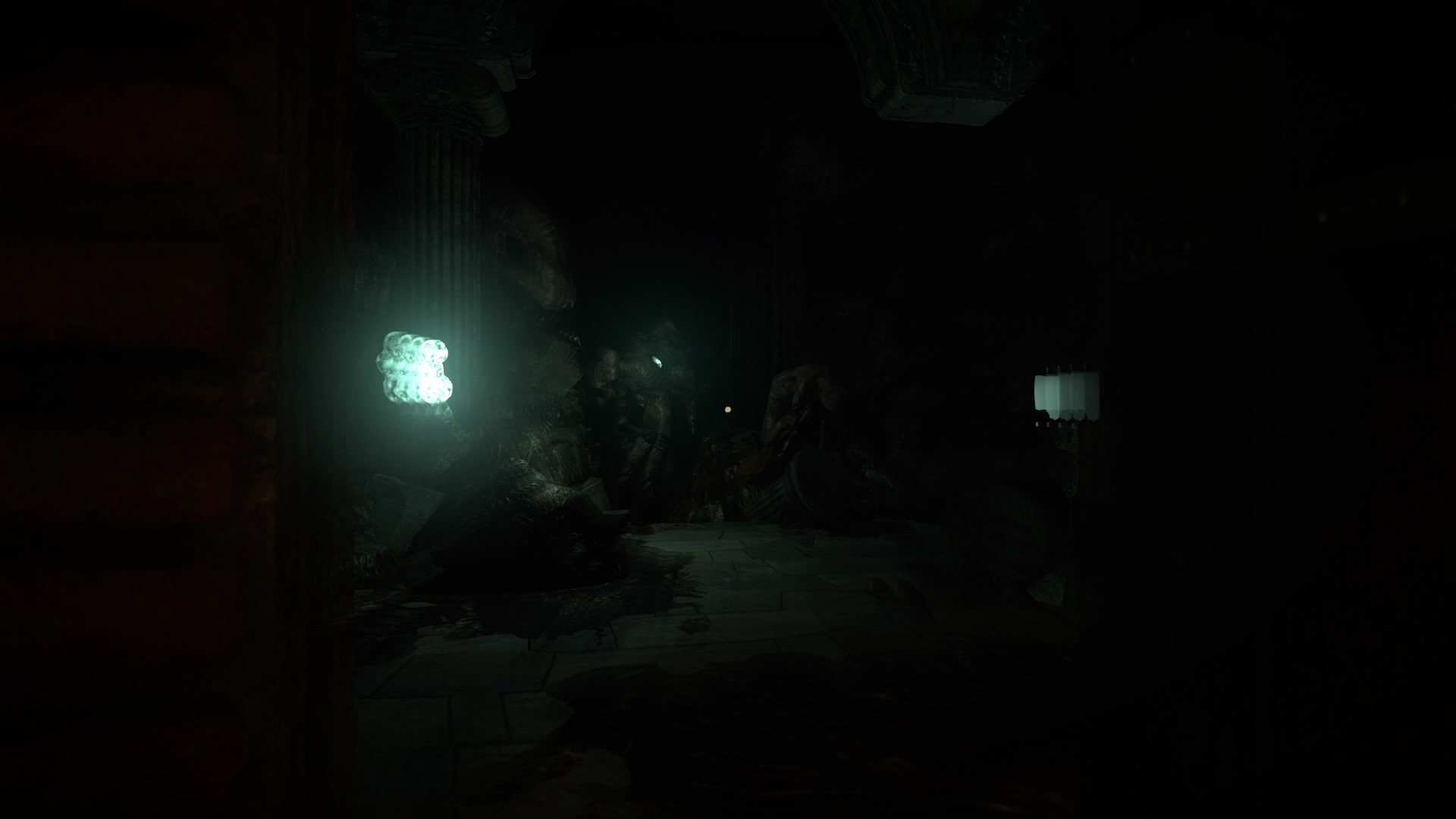 As with the prior games, you need to keep an eye on creatures to avoid them, however, doing so also drops your sanity and distorts your vision. Amnesia: Rebirth is best played with headphones so you can rely on sound instead.

There are times it’s hard to believe Amnesia: Rebirth is still running on the same HPL Engine that powered the Penumbra trilogy. Of course, it has been improved and refined since 2006, but ambient audio, haunting background tracks, and excellent voice acting do most of the heavy lifting when it comes to the presentation. The environments, often geometrically simple with some low-resolution textures, are draped in starkly contrasting light and shadow. The creaking of old support beams, the screech of metal gates, crack of lightning, distant growls, and possibly the pot you accidentally dropped, all sound incredibly loud in the otherwise silent environments.

All these elements ground her character and, in turn, the player in her world, even the otherworldly locations. This connection amplifies the horror and sense of vulnerability.

Tasi has plenty of narrative reasons to push through the horrific situations she faces, but at least her responses are believable – gasping, mumbling, cursing, crying, or gently singing to her swollen belly to calm herself and unborn child. All these elements ground her character and, in turn, the player in her world, even the otherworldly locations. This connection amplifies the horror and sense of vulnerability. 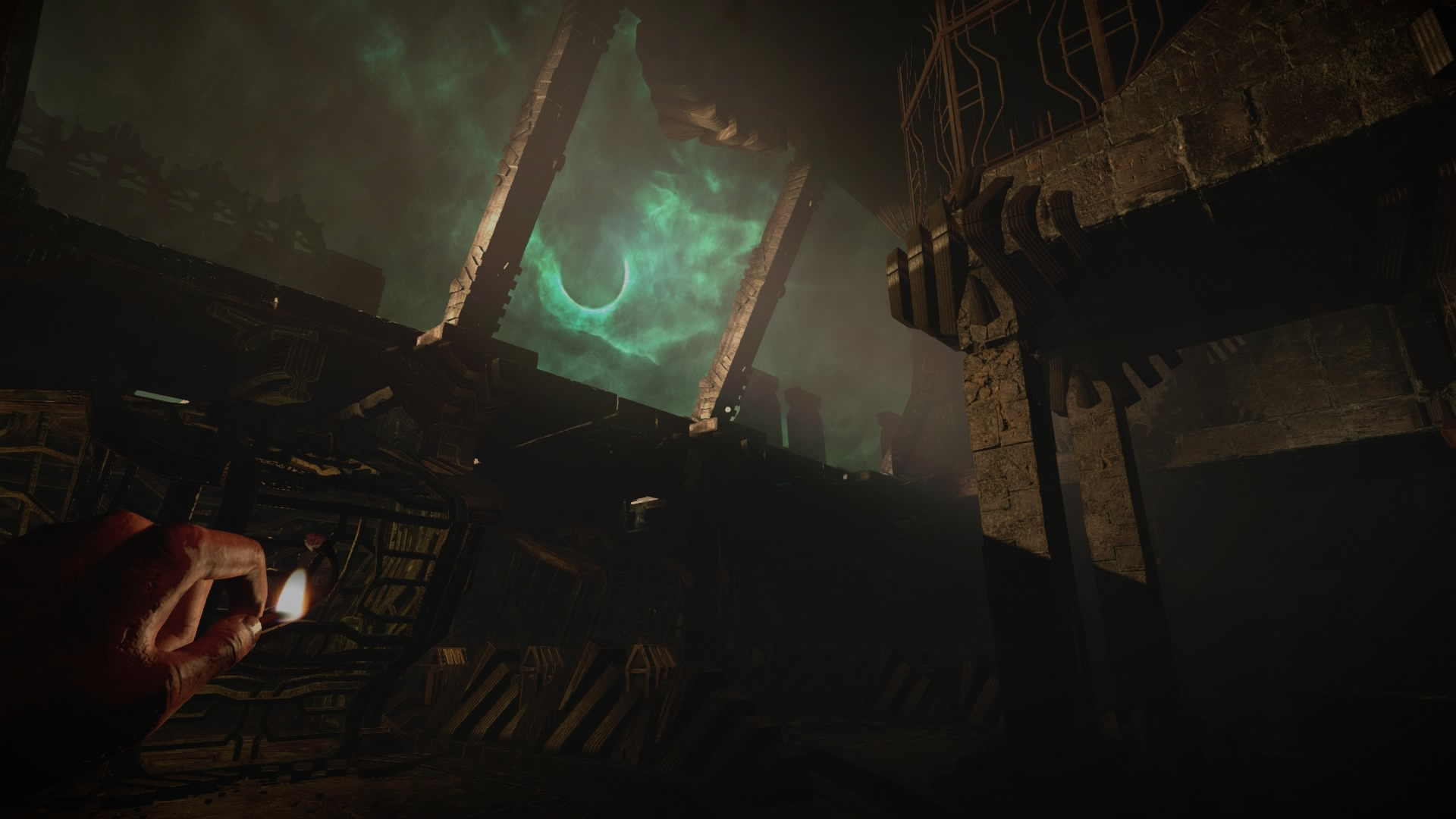 Unfortunately, being outside in the post-apocalyptic alternate dimension is no guarantee of safety, with howling winds and a sky split by lighting bolts, all bathed in the neon light of the moon.

As much as I enjoyed the simple gameplay loop and pacing of the prior Amnesia games (with SOMA included), Amnesia: Rebirth felt like it ran on a little too long. Not with regards to total playtime – I took about 10-hours for my initial run – but rather due to design decisions. Firstly, the plot relies on contrived events to stall Tali’s progress and send her on terrifying detours. It’s nerve-wracking the first time it happens but becomes annoying when used repeatedly. Secondly, several puzzles and encounters types are reused in later areas, mixing up the environments and enemies sure, but ultimately playing out in much the same way. Thankfully, the narrative beats came frequently enough that I feel like I'm nitpicking.

Amnesia: Rebirth is a great sequel to The Dark Descent, sharing much of the same basic gameplay and visual elements (right down to the inventory design and font). It has an equally compelling protagonist and intriguing narrative that fleshes out the lore of the orbs and the shadow that stalks those foolish enough to wield them. The environments and puzzles are more varied, the creatures grotesquely inspired and terrifying, while the presentation will leave you unsettled and on edge throughout your playtime (despite some rough edges).

Frictional Games’ have always made terrifying and narratively complex horror games, but I’d like the see the core mechanics receive an overhaul in whatever title they develop next.
7.5

A compelling protagonist with believable motivations

The oppressive and menacing atmosphere

The return of item management and complex puzzles

Gameplay has not evolved in any meaningful way