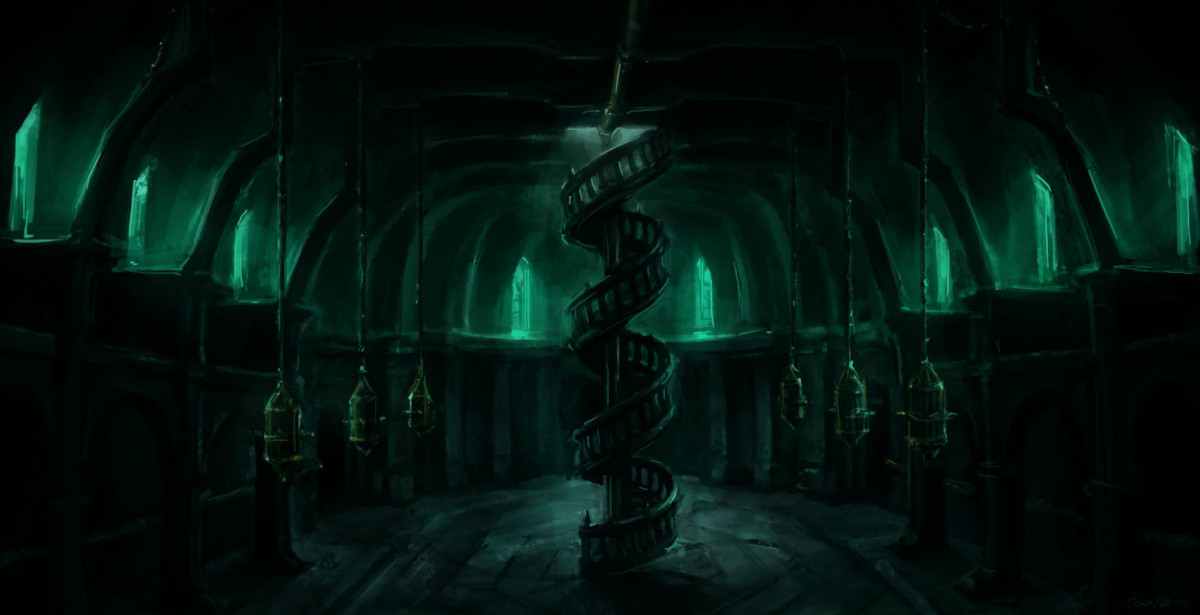 At long last, Xbox One owners finally get their hands on the terrifying Amnesia games. This collection includes Frictional Games’ Amnesia: The Dark Descent, its short, puzzle-oriented DLC, Justine, and the loosely-connected follow up Amnesia: A Machine for Pigs, developed by The Chinese Room. All three are narrative-driven, survival-horror games with some light puzzling involved and, though they may look dated, they drip with atmosphere and are packed full of moments that’ll keep you on the edge of your seat (and peeing more frequently than usual, or maybe that's just me).

There is no means to fight back against the creatures that lie in your path, so stealth is an essential part of experience, with progression typically gated by a myriad of physics or item-based puzzles. All three games have an intriguing narrative – told through flashback sequences, scattered documents, and brief loading screen snippets – so you’ll want to pay attention if you’re looking to find the connection between each game. 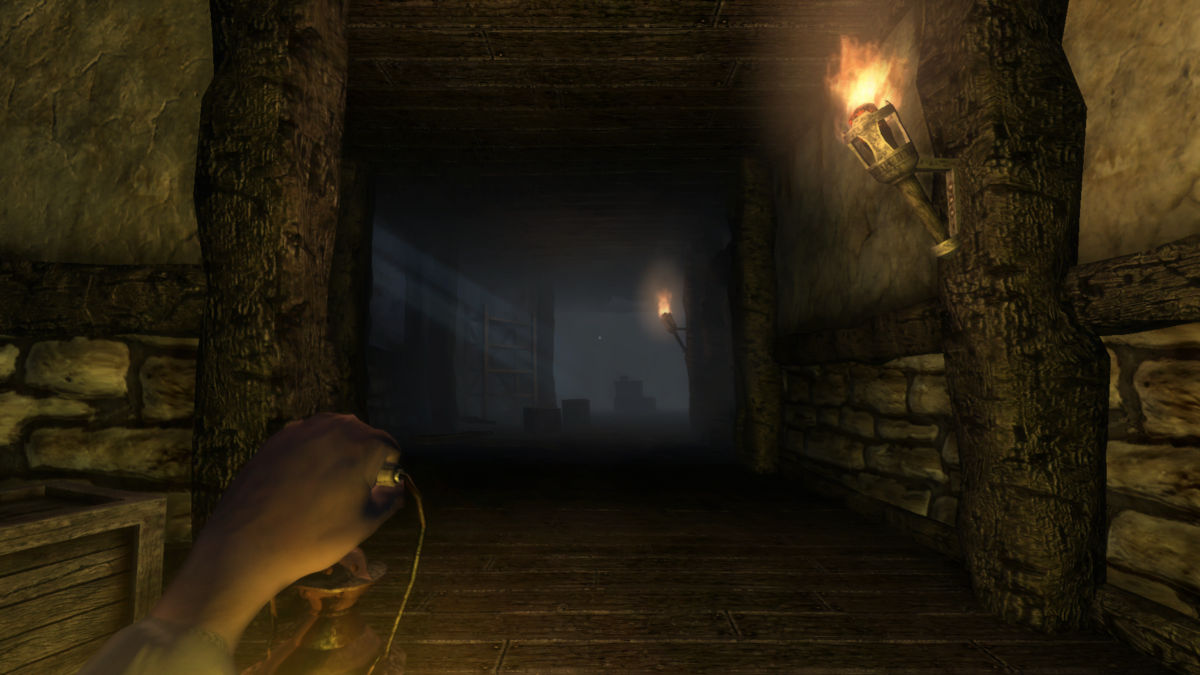 With several puzzles that require you to explore adjacent areas for important items, deciding which paths to illuminate is essential to maintaining your sanity.

The Dark Descent takes place in in 1839, placing you in the shoes of Daniel – an adventurer and archaeologist – who wakes up in a crumbling Prussian castle, with only a vague memory of his name and his address. He soon stumbles upon a note written by himself, informing him of a mysterious force pursuing him, the location of his former host, Baron Alexander, and instructions to descend into the bowels of the castle. Unfortunately for Daniel, his path is blocked by various monstrous creations and organic corruption overtaking the castle. In the Justine DLC, you wake to the menacing voice of the titular character, encouraging you to progress through a series of challenges, saving innocent victims - if you can - or sacrificing them for an easy escape. All the while, you need to avoid her former suitors whom she has tortured and driven to insanity.

All three games have an intriguing narrative – told through flashback sequences, scattered documents, and brief loading screen snippets – so you’ll want to pay attention if you’re looking to find the connection between each game.

A Machine For Pigs follows a similar setup. On New Year’s Eve in 1899, Oswald Mandus - a wealthy industrialist with a mechanised butchery - wakes from an incoherent dream in his own twisted mansion, uncertain of how he ended up there and desperate to find his two sons calling to him in the distance. Shortly thereafter, a disembodied voice on the telephone – calling itself the "Engineer" – instructs Mandus to restart a giant machine in the tunnels below his house, to free his sons trapped inside. A task made that much harder by aggressive pig-human hybrids that now guard the route.

All three games follow a similar narrative structure: the protagonists – and therefore player – slowly unravel the series of events that led to start of the game, discovering more about their own questionable past, and the secrets they’ve tried to hide, even from themselves. Discovering key locations triggers flashbacks, notes are narrated by the protagonists, and, in A Machine For Pigs, Mandus actually develops a voice of his own as the game progresses. Although the survival-horror gameplay is enjoyable in its own right, this unravelling narrative is the main hook. 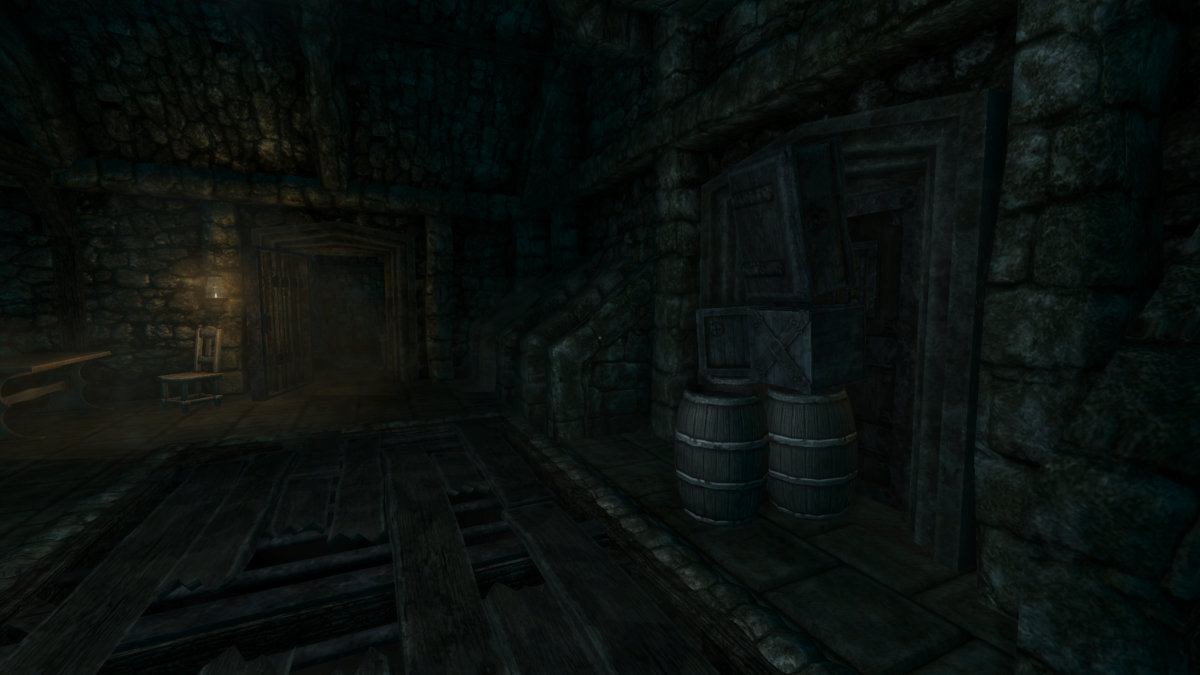 Broken up into distinct challenge rooms, usually with only a single "suitor" stalking you, Justine offers more creativity when it comes to solving puzzles or blocking your foes.

The Dark Descent and Justine feature gameplay mechanics that should be familiar to most survival-horror fans - when not creeping through labyrinthine tunnels, hiding in dark corners, scavenging for lamp oil and tinderboxes, or deciding on safe routes to illuminate - you’ll have several attributes to manage. Sanity is the big one, even more so than health seeing as most things kill you quickly, and this stat drains by witnessing disturbing events, staying in the dark for too long, or looking directly at creatures. Unfortunately, the best way to avoid your foes is to hide in the dark and far too often I found myself huddling in a dark corner, staring at a wall, while something stumbles past just behind me (hoping that my sanity meter didn’t decrease too far, leading to gasping breaths and shaky vision that makes you easier to spot). Sanity is only restored by completing puzzles or progressing into new areas, incentivising you to keep moving forward.

Unfortunately, the best way to avoid your foes is to hide in the dark and far too often I found myself huddling in a dark corner, staring at a wall, while something stumbles past just behind me.

With the story a focal point, death is designed to frighten, rather than impede progress. There are several tough, mandatory chase sequences and sections with roaming monsters, but dying will usually result in you waking up just before the encounter or in another part of the map, often with the offending monster moved to another location or despawned entirely. Players who struggle with the stealth and sanity mechanics will probably find themselves squealing in terror more frequently, but they’ll never end up unable to progress. Having said that, there’s a new “Hard Mode” in this release for the masochistic, with reduced resources, no autosaves, manual saves requiring four tinderboxes, death when your sanity hits zero, and – worst of all – no music cue that indicates the presence of monsters; creeping around a corner straight into one of the “gatherers” with no forewarning had me violently swearing at the screen.

At just over an hour long and focused on puzzle-oriented challenges and a persistent foe, Justine shares the basic survival-horror mechanics with The Dark Descent but there are no saves and death sends you back to the beginning, upping the stakes considerably. 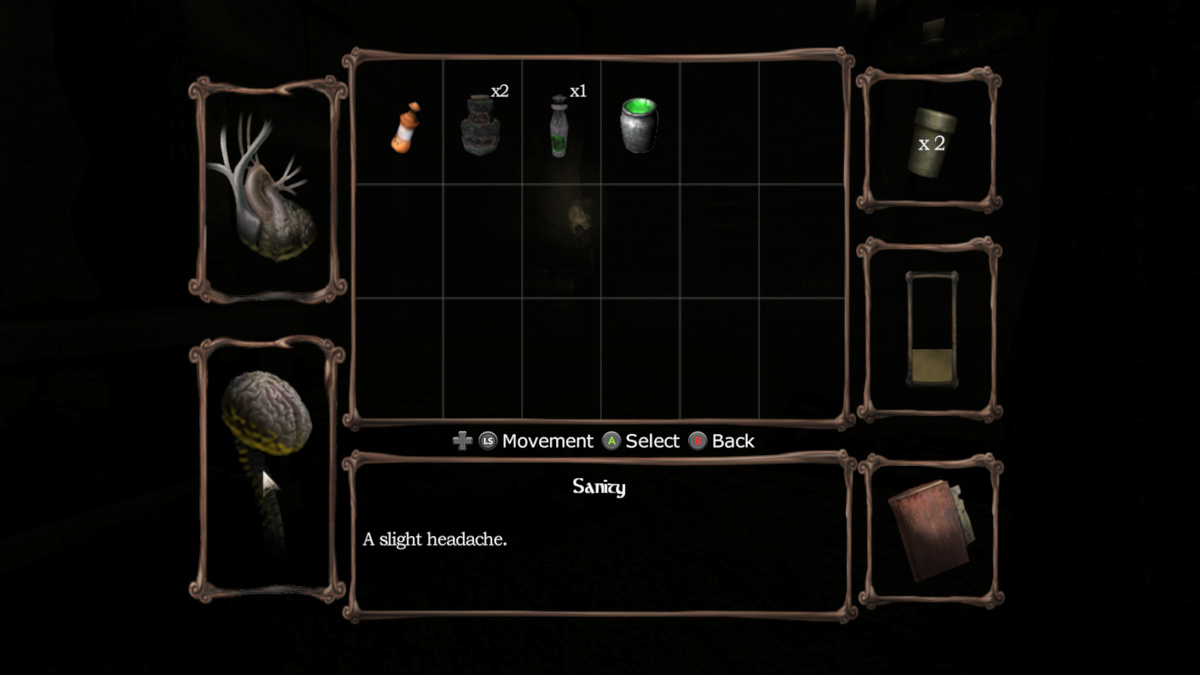 While there are only a few resources and puzzle items to juggle, the inventory in The Dark Descent and Justine are integral to the survival-horror experience.

Talking of gameplay, A Machine For Pigs was a divisive release. The story is easily the best in the collection but The Chinese Room - most famous (or infamous) for creating the “walking simulator” genre - removed the resource management aspect of the game, the sanity meter, and even added regenerating health. The urban setting means far more electric light sources and you even have an infinite electric lantern (not that you’d want to use it near foes). To keep things tense, you must navigate much larger environments with less predictable enemy movement. Puzzles, in the absence of an inventory, revolve around manipulating or using objects in the environment. Once again, death is usually a temporary setback, with frequent checkpoints and shifting enemies that ensure you’re never stuck for too long.

Talking of gameplay, A Machine For Pigs was a divisive release.

The Xbox One offers up exactly the same experience as it's 2016 PlayStation 4 counterpart - a maxed out PC port, with a somewhat-clunky UI and gamepad control scheme, first introduced to the PC version years ago. Many doors, drawers, switches, and objects are designed to be manipulated by clicking and dragging with a mouse. The “click” is assigned to the right trigger or bumper, and objects manipulated in combination with the right analogue stick; a method that works fine until you’re being chased and need to clear debris from your path or slam a door shut behind you to slow pursuing creatures. It doesn’t affect gameplay too often, but you might find yourself cursing the controls during these high intensity sequences. 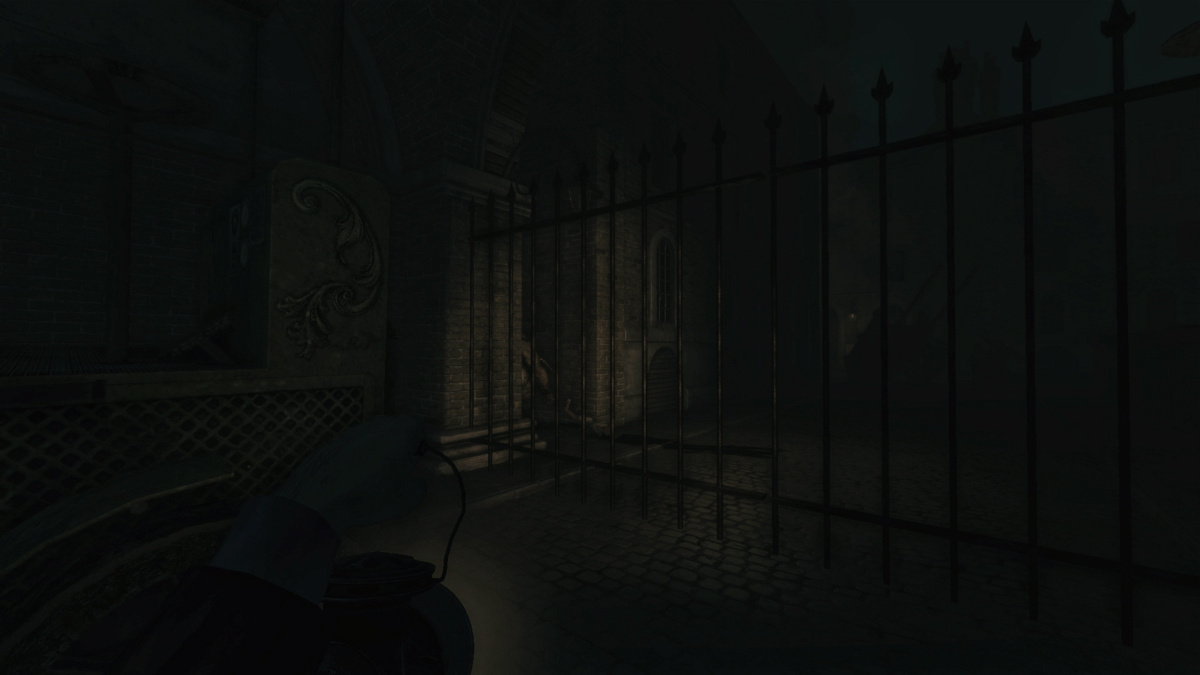 The lack of a sanity meter and electric lantern in A Machine For Pigs removes some of the tension but only serves to aggravate creatures hiding in dark corners.

There’s no getting around the fact that eight and five-year-old ports, both developed using an engine that already looked ugly at launch, don’t hold up well. Environment and object geometry is simple, objects and textures are repeated too often (especially in The Dark Descent), and lighting is basic (albeit much improved in A Machine For Pigs). They’re old games and they look the part. However, what they lack in visual prowess, they make up for with a menacing and authentic atmosphere. The writing and narration is spot-on for the time period, the blurry textures are typically hidden in perpetual gloom, ambient sounds and groaning monsters push up your heart rate, and when the music kicks in - especially when there are monsters nearby – it’s easy to lose yourself in the experience.

Overall, the Amnesia: Collection offers up a good 15+ hours of tense exploration, puzzling, and scares that survival-horror fans should enjoy. With a strong focus on the narrative and mostly linear progression, you're unlikely to play through them more than once but, available digitally at R249 on Xbox Live, this collection still offers great value.
7.9

Chewie
Started jamming this a week or so ago. Really love the gothic horror vibe its got going on here. And the setting..Love history so the setting is a big plus..thanks to this game I started researching the history of Prussia (which is now in the eastern area of Germany) and the monarchies of that time in Europe and the 30 Year War as well....other than freaking me out, this game was rather educational.

Blaze
The Dark Descent is a near-perfect H.P. Lovecraft-like game. Reminded me of Bethesda's Call of Cthulhu: Dark Corners of the Earth.