I know it's late, but I had to calm down. 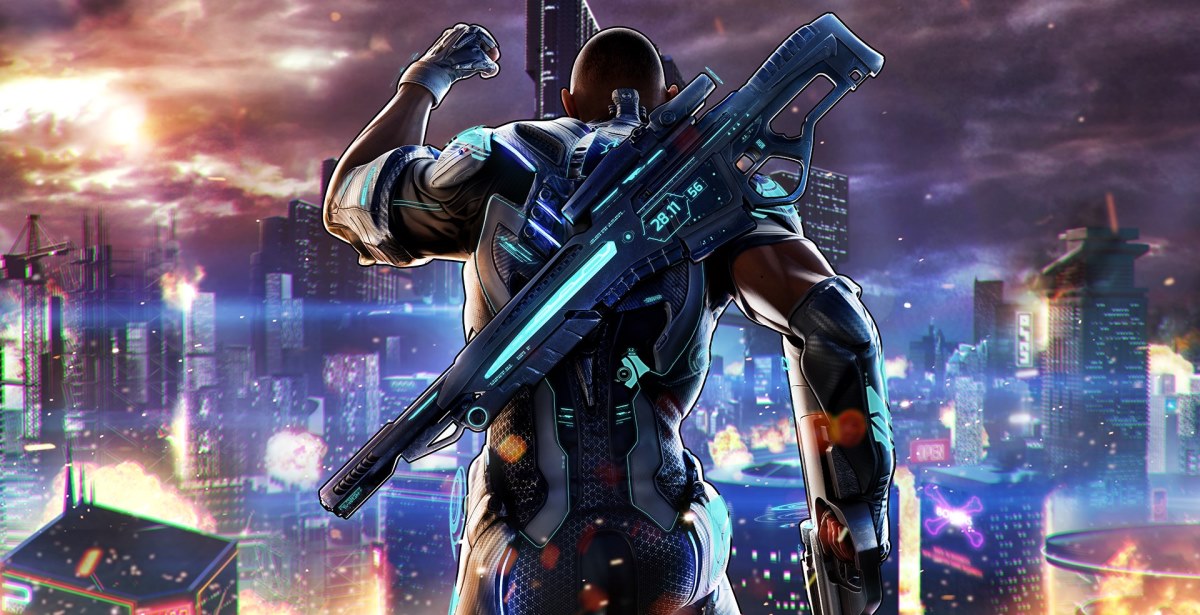 Let me get this out the way immediately: the Crackdown 3 review is late. Very, very late. It’s late because I had to calm down and rewrite this review about three times. Crackdown 3 is a bad game, a game that should have been released ten years ago on the Xbox 360 and not on the Xbox One family of consoles. Now don’t get me wrong, this is not a broken game that makes Crackdown 3 unplayable ala Anthem. It is just not a fun game. It is a boring game, a game not at all interesting. It exists and that is about the best thing that I can say.

First off Crackdown 3 doesn’t crash, doesn’t stutter or suffer from any other performance issues. It is stable, there are no frame rate drops or teleporting or invisible enemies. From that perspective, the game is perfectly fine, good even. In terms of sound, Terry Crews is as bombastic as you would expect and brings the one bright spark to the game. He is obviously a great actor as he actually sounds like he is having fun, a great feat of convincing the audience that the actor is into the role. 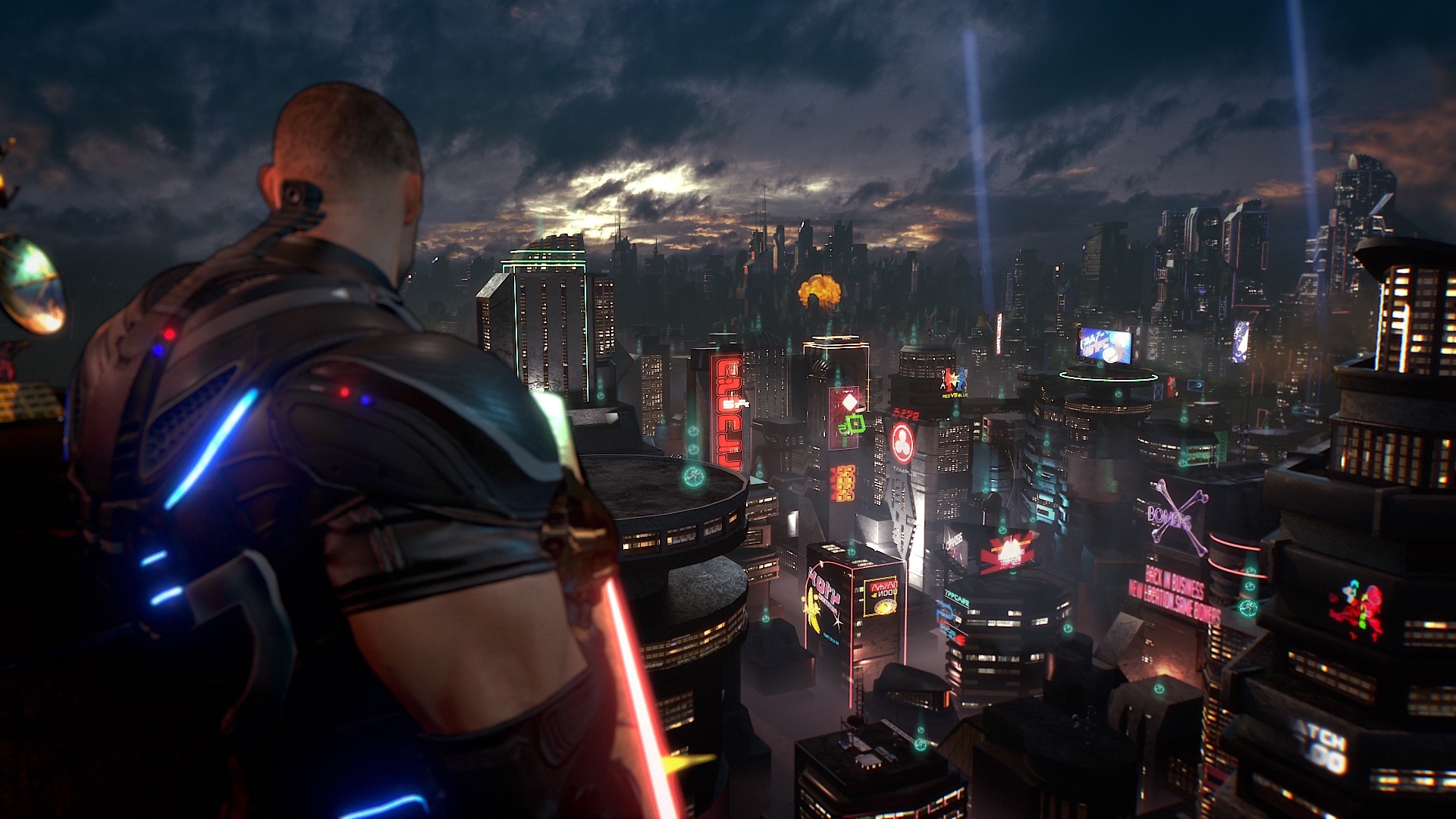 Now for the bad stuff. The game is simply boring. As an open world game, it is lifeless and sparsely populated. It feels like a playground that was created just for the purpose of your destructive tendencies. There is no sense of dynamism, or that anything in that world exists outside of the immediate purpose of providing colour for your playground antics.

The missions are rote and boring, consisting simply of you killing a ton of generic enemies until a mini-boss spawns who you then kill.

And your playground antics are just as boring. As you traverse the world you find different missions such as freeing political prisoners, liberating public transport terminals or destroying chemical “mining” facilities curiously set right in the middle of the city. Why that is, is never explained. The missions are rote and boring, consisting simply of you killing a ton of generic enemies until a mini-boss spawns who you then kill. To progress in the game, you have to complete enough of these qualifying missions to draw out the boss.

These bosses are the one bright spot in the game as they are suitably insane and over the top in their personality and design. Unfortunately, the boss fights are simply one large arena where you fight spawning lower level enemies in between attacking the boss either directly or his weak spots. It’s such an old school design that there is no challenge or puzzle to solve, just run around and shoot while keeping an eye on your environment. 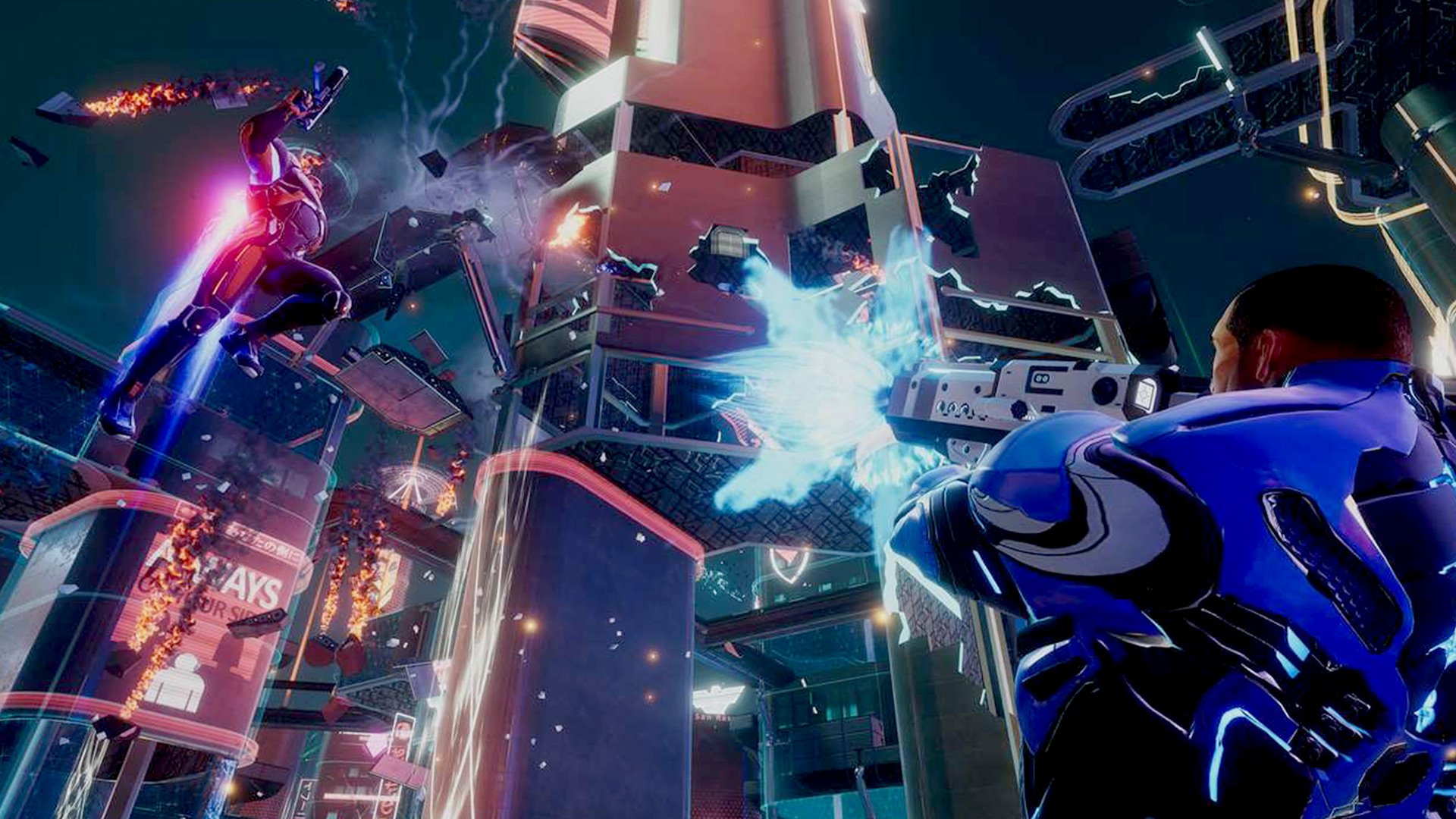 Traversal around the city is a chore, broken by the hunt for green orbs which can be fun as much as busy work is fun. Scaling buildings tends to be luck of the draw as you jump and platform around looking for these orbs so that you can level up the various skills on the skill tree. I say luck of the draw as I found it often difficult to judge distances and ledges so sometimes, I would jump to grab a ledge that was not grabbable. And the traversal is also part of the problem. It is boring with you just running around or jacking cars. Given that you are an upgradeable, cyborg super-soldier, the fact that traversal is so boring amazes me. After seeing what Insomniac did with Spider-Man, how did Microsoft not want to at least try and ape that sense of speed, dynamism and fun?

The shooting is actually decent. The enemies do swarm you so ensuring that you move around while taking out the generic enemies is essential. But other than that, the enemies are pretty stupid - they will swarm, but not flank you. They won’t run away or even follow you if you are low on health and decide to retreat; they have their boundaries and will not breach that.

After seeing what Insomniac did with Spider-Man, how did Microsoft not want to at least try and ape that sense of speed, dynamism and fun? 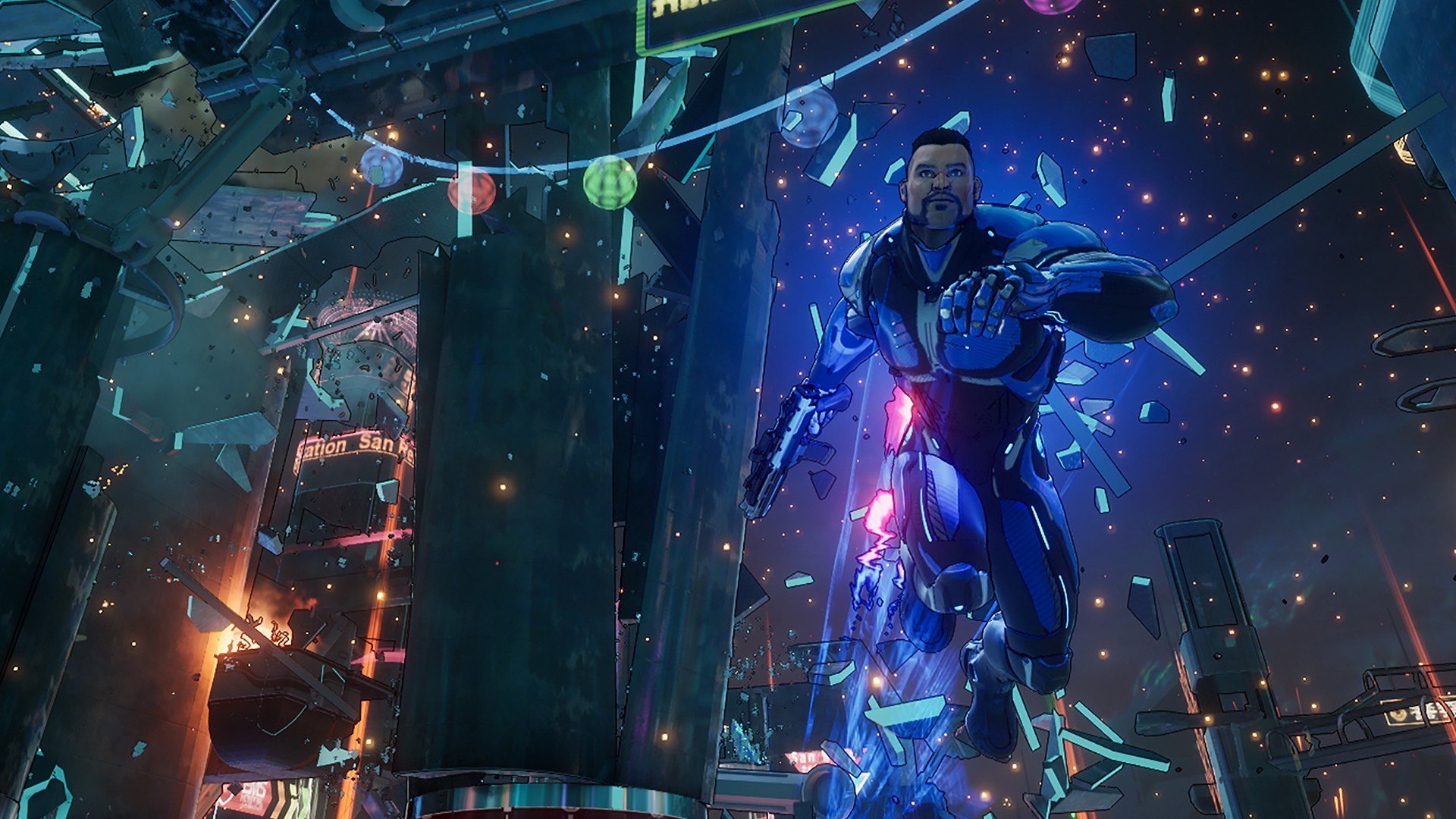 The oft touted dynamic destruction of MS’ Azure servers is not on display in the single player game. Unfortunately, that is tied to the fun at first multiplayer. It is fun as you figure out new ways to reach your competitors by strategically destroying surfaces and buildings to surprise the enemy. The destruction is impressive, but it is too bad that it is available only in the multiplayer modes.

Crackdown 3 is a game that was in development for far too long and it shows. This is a game that would have been fine releasing on launch of the Xbox One as it looks like a 360 game that was uprezzed for Xbox One. Its biggest sin isn’t that it is bad or unstable, but that it’s boring. At least with an unstable or buggy game you can have fun while bug hunting for the most outrageous problems, but with a boring game you cannot enjoy it in that “so bad, it’s good” way. How this game survived and Scalebound didn't is a mystery to me.

It's a boring game

I was bored witless playing this game

Did I mention how boring this game is?

Vice Cerberus
@Magius DMC 5 would be easy all you would have to say is 'GOTY' and everyone would have been happy.

Magius
@KF yep you do, although if I had been given DMC I think I would've wept. I played 2 many moons ago and never really got into the series so I probably would not have done the game justice anyway. At least I have Rage 2 coming up and that should be fun

Magius
@Tea I wanted this to be good given that it has been in development for close on ten years. Every time I read what I wrote I had to make notes and rewrite a ton of stuff because of my anger at what they finally produced just showed. It makes no sense that MS said Scalebound was not hitting the mark but this was. I just want to know who has what pictures of Phil Spencer that they were able to keep this game alive.

Lurch
I think i'm going to rather tackle Crackdown 1 and 2 back-compat on the X1 and see if the fuss was worth it in the first place. 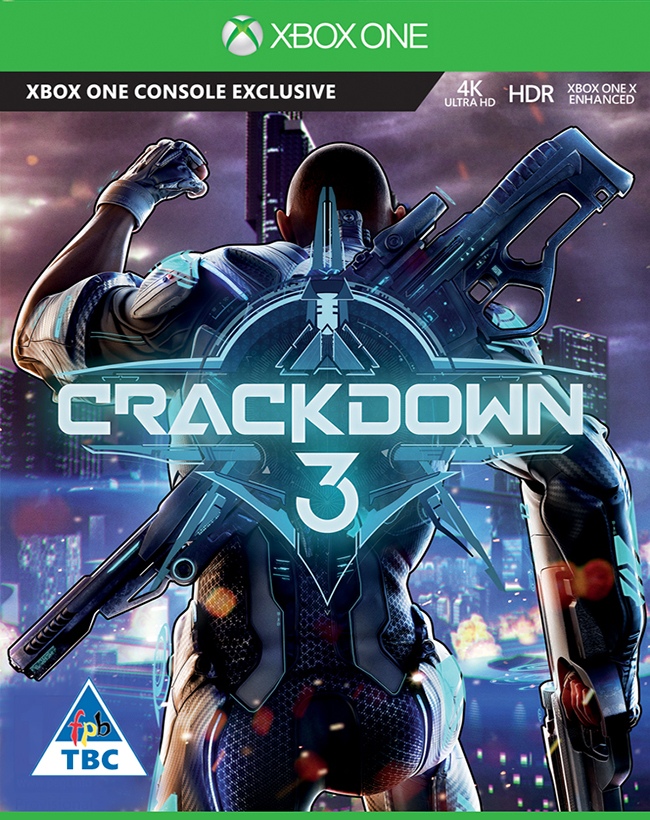