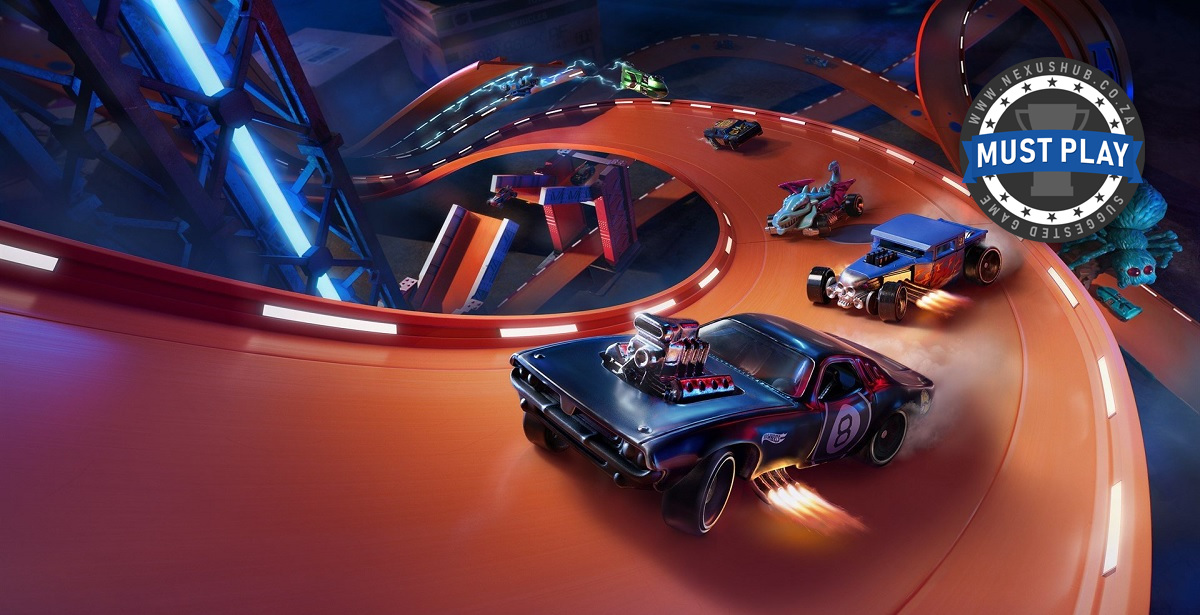 When Milestone first announced Hot Wheels Unleashed back in February this year, something stirred in my soul. The 7 year-old in me screamed with joy as the 30 year-old that I am raised an eyebrow. Fast forward a few months to launch and it’s now the 30 year-old screaming with joy and the 7 year-old raising an eyebrow. The fact that an arcade racing game involving tiny die-cast toy cars can have such a profound effect on a man is testament to the quality and effort on Milestone’s part. Hot Wheels Unleashed may just be a future classic. 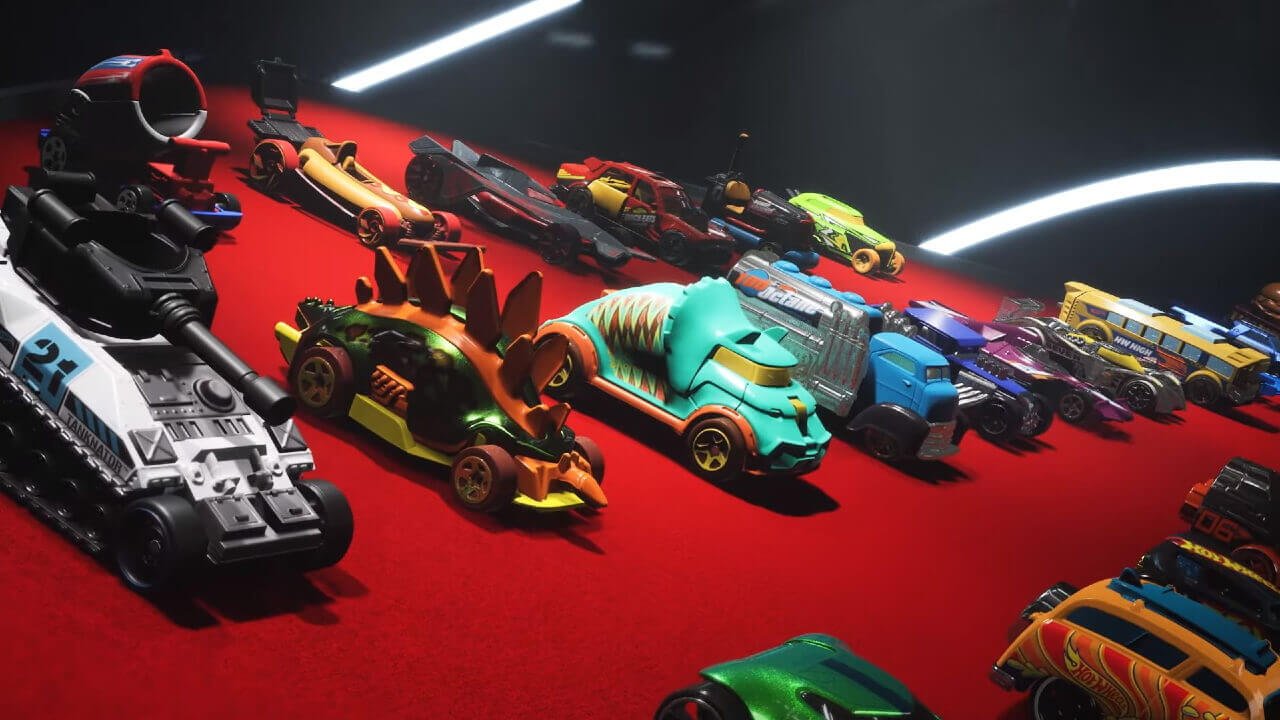 I’ll be the first to admit, I’ve reviewed my fair share of Milestone games and have seldom found much to write home about. However, that all changed with Hot Wheels Unleashed. It’s been a slippery slope for me ever since I got my paws on the game. Not only have I found it to be one of the most addicting, smile-inducing racers I have ever played, but several trips to my local toy store have me rekindling with my younger self as my real-life collection of tiny cars has suddenly taken a massive upturn.

While the campaign starts with largely tame circuits, things ramp up fairly quickly as you start to gain a bit more experience.

In essence, Hot Wheels Unleashed is your childhood toy fantasy made manifest (No, don’t overthink that line). Set in a variety of ‘real-world’ locations, i.e a basement, skate park, garage and high-rise building, players take to the plastic orange and blue track so synonymous with the brand to race against time and opponents in a series of heart-pounding, adrenaline-fueled events. While the campaign starts with largely tame circuits, things ramp up fairly quickly as you start to gain a bit more experience. Before you know it, you’ll be heading into uncharted territory as you tackle multiple loop-de-loops in a row, snaking tracks with no barriers, teeny fans blasting air across the path and even some wilder more inspired obstacles like spiders, dragons and volcanoes. 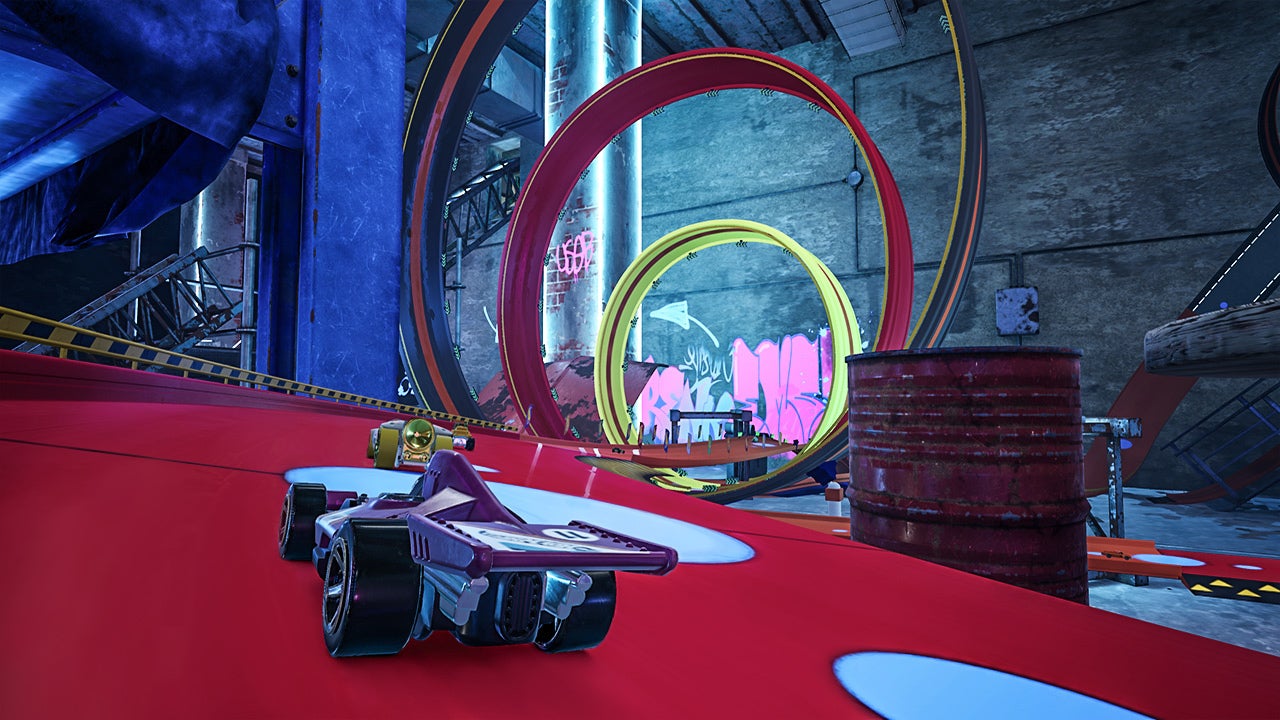 The learning curve is steep here, and even on normal difficulty, I found myself sweating to place in the top 3 at times. It’s not, however, unbalanced by any means. Most of the time mistakes are user-error. There’s an art to racing tiny toy cars around a plastic circuit. With only gravity really keeping you on the track, you’ll need to carefully drift your way into tighter turns in order to proc a nitro-boost to give you a leg up on the competition. A variety of boosts are laid sporadically across each circuit as well as magnetic sections which keep you locked onto the track while driving upside down. Every so often the track will cease to exist as you floor it across a couch or through a set of college benches. 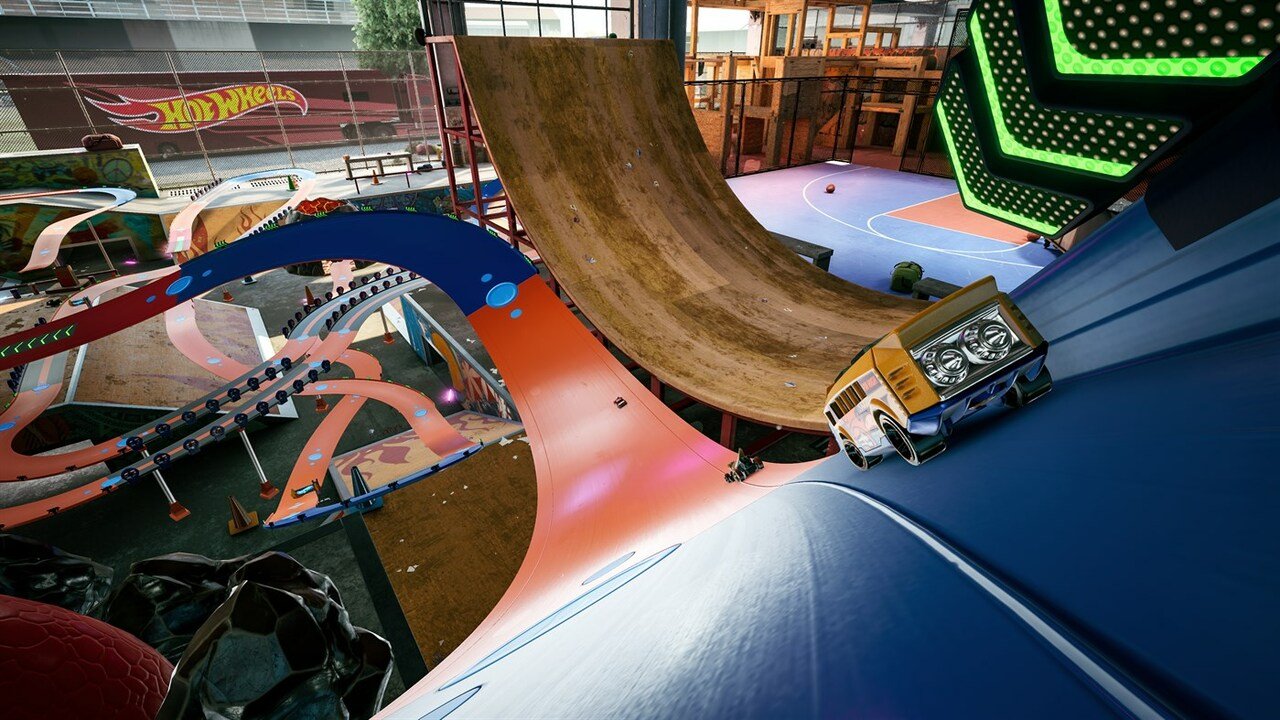 Initially you’ll be glued to the action on track, but with a little experience under your belt your eyes start to wander beyond the guard rails and into the environment that gives it soul. Giant rubber tyres and bolts create all new and unexpected hazards, the neon lit garage generates its own aesthetic to the racing, while thousands of feet stand between your toy car and certain inevitable doom as you race out over the clouds on the construction site. These stunning backdrops are made even cooler when your brain starts to process just how small your little cars are in the bigger picture. Unfortunately, with just a handful of different environments, it does leave me wishing they had done a few more to keep things a little fresher.

The delightfully minute attention to detail is uncanny.

It really is the cars that make Hot Wheels Unleashed so damn special. In a title where you race tiny die-cast toys around life-size locations, naturally, these cars need to look like their real-world counterparts, moulds and all. The delightfully minute attention to detail is uncanny. Each car has been pain-stakingly recreated in the game with tiny paint flecks and different composites. Plastic bodies are clearly distinguishable from the die-cast metal frames and each car (of which there are 60) is uniquely distinguishable from its peers. 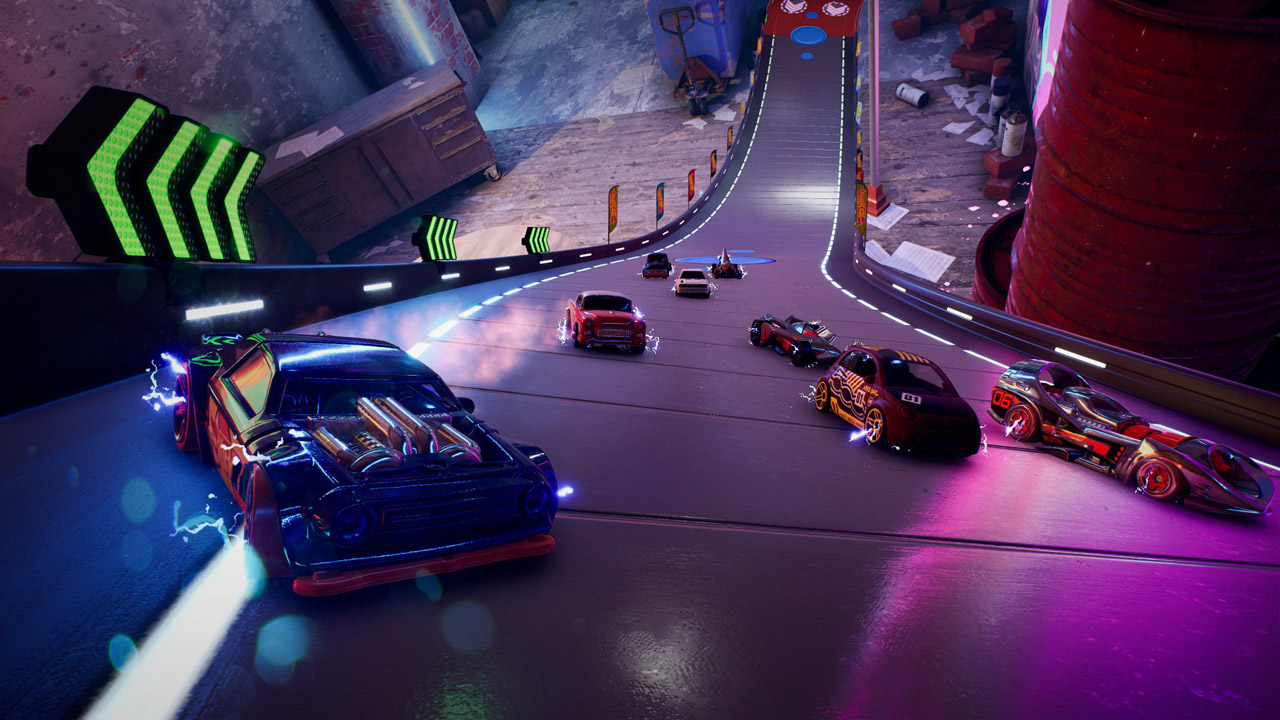 I have spent hours rotating and flipping my cars in the collection’s tabs in wonder at the most microscopic details Milestone have put in. From the famous Hot Wheels ‘Specials’ of Boneshaker, Roller Toaster and Tricera-Truck to more down to earth real-world mini’s like the Fiat 500 and Ford Mustang, there is a world of collecting to be done. Each little car is brimming with personality and its own stats. You can also upgrade them to boost their stats ever so slightly. There is enough diversity to make each car sound and handle differently too.

Additionally, there’s a rather complicated, albeit intricate livery editor which allows you to spice up your car. I was even able to replicate a Hot Wheels version of my MINI JCW, which put a huge smile on my face. 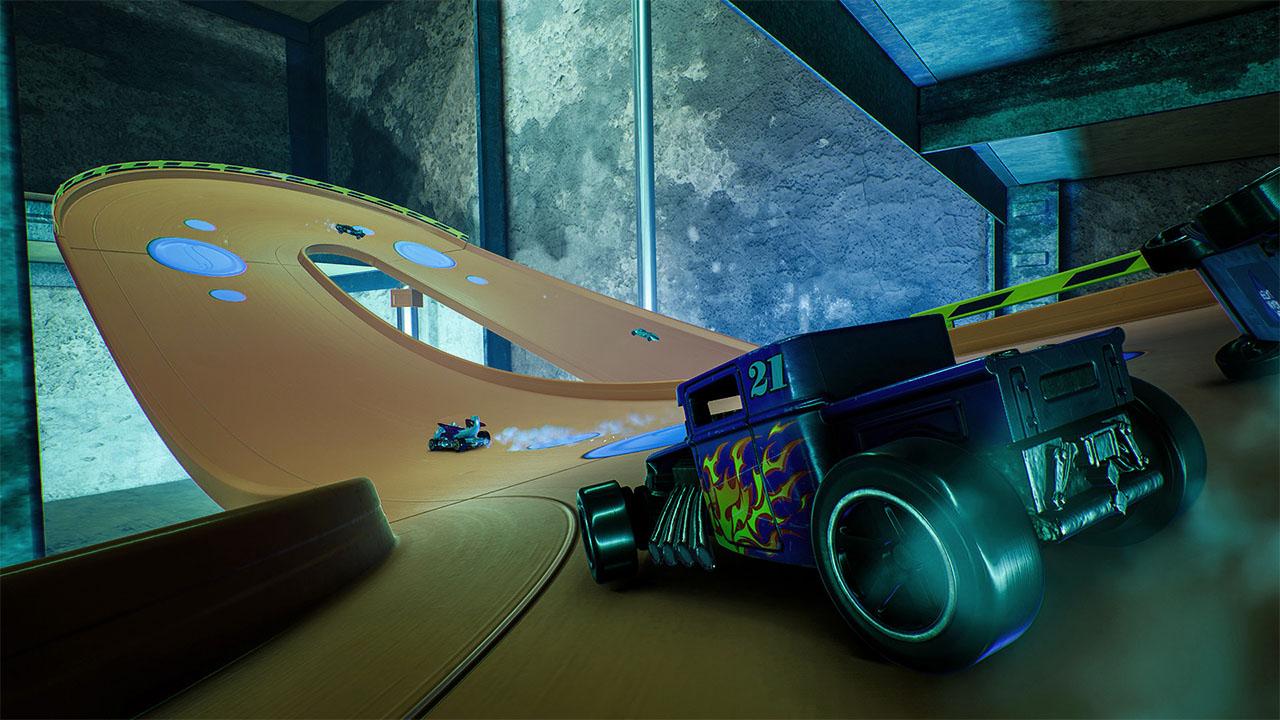 There are several ways to chase these cars. As you progress through the campaign you’ll earn gold coins, the game's form of currency, and can spend them in one of two ways: blind boxes (a sort of loot box, I suppose) can be purchased and opened for new, or duplicate cars. Alternatively, a limited time shop rotates a selection of five cars every four hours. At first this may seem a bit stingy, but half the fun of the game is collecting and it’s generous enough that you may get three or four per play session.

The Track Builder is an intuitive and easy to access tool that allows you to utilize all elements seen in the campaign and build your dream track.

Beyond the hefty campaign there is also split screen and online multiplayer, both of which have no issues whatsoever as well as the real dark horse of this title, Track Builder. While the game offers some fantastic tracks, especially once you make it into the campaign proper, there’s always room for more plastic madness. The Track Builder is an intuitive and easy to access tool that allows you to utilize all elements seen in the campaign and build your dream track. Fans of Rollercoaster Tycoon-style games can have a field day here building some truly wild circuits. What’s more, they can be shared and raced on in the community hub. 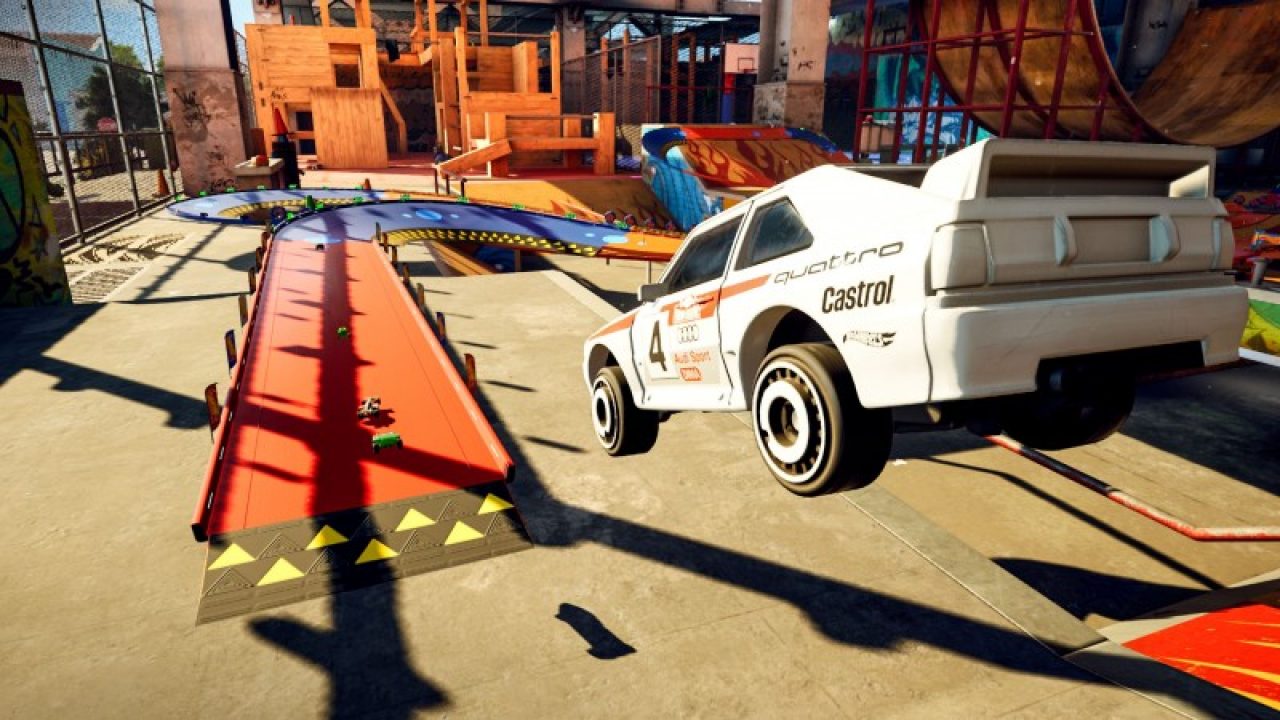 Hot Wheels Unleashed is a game that puts a smile on my face each time I fire it up. It’s a total toybox of laughs and smiles and a pretty good little racer too. Spend enough time and you’ll reap the rewards and find it hard to put down. It’s hard to dislike almost any part of this joyful little title. With boundless ways to play, build and paint, this is sure to be one title that remains in my library for a very long time. It’s exceptionally well-crafted and I am looking forward to seeing what’s in store for it down the line. If you have a love of racing or just an obsessive collecting problem, this little racer is for you.

A great challenge for even the most seasoned racers

A lack of diversity with just 4 main environments

May be a bit too challenging for younger audiences

Milni06
Great review dude! Game looks and sounds awesome, and at that price too!? Might have to pick this up!

Coffeboy
The game is amazing! I have also started collecting the cars again, desperately looks for the treasure hunt car, so hard to find. My son and I love the blind box’s , but man the racing is the dark souls of racing games, super tough one mistake and you done lol! Absolutely Addicted to this racing gem

Tea
I cannot believe the amount of praise this game is getting!

So keen to give it a go 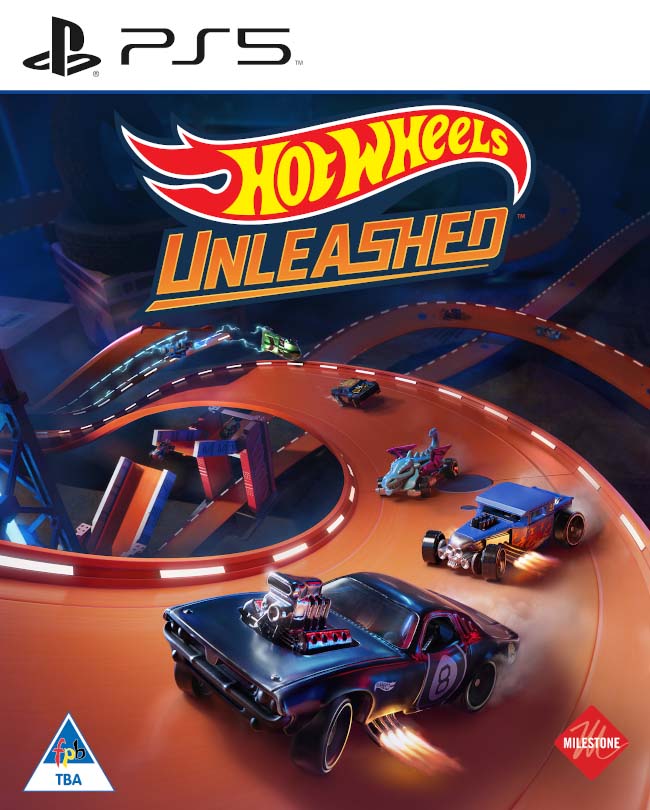