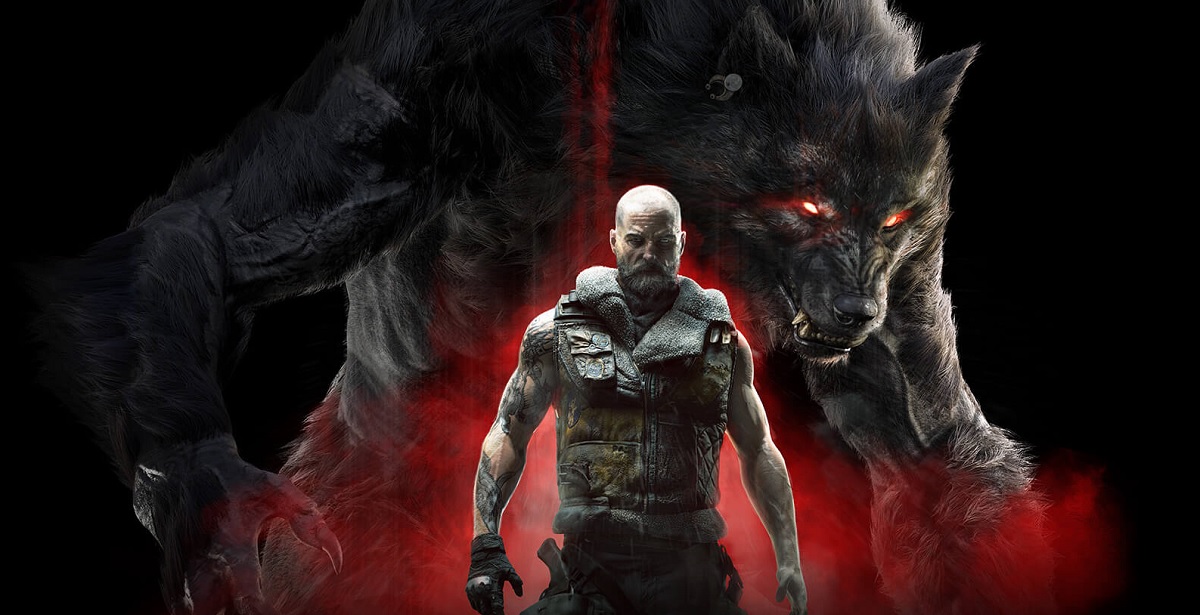 My biggest gripe with Werewolf: The Apocalypse – Earthblood is just how little the World of Darkness settings means to the story and gameplay. A game about ecoterrorist werewolves trying to take down an evil energy corporation (influenced by their corrupted god of destruction) sounds like an amazing premise, but the narrative is both full of cliches and was quickly forgotten. Surprisingly, it was Werewolf: The Apocalypse – Earthblood’s action-oriented gameplay that kept me hooked, despite lacking much of the complexity you would expect in a role-playing game.

Werewolf: The Apocalypse – Earthblood’s prologue – which doubles up as a heavily scripted tutorial - sets the scene. Cahil, his pack, and several human allies are disrupting and destroying the operations of Endron, a subsidiary of Pentex, the big-bad megacorporation from the tabletop lore. After a brief mission that gets you to grips with the controls and basic gameplay loop (think stealth vs. combat), things go awry. Cahil loses a loved one, succumbs to rage, and a member of his tribe dies by his clawed hand. After 5 years of self-imposed exile, Cahil discovers a plot against his old cairn and is forced to return home. 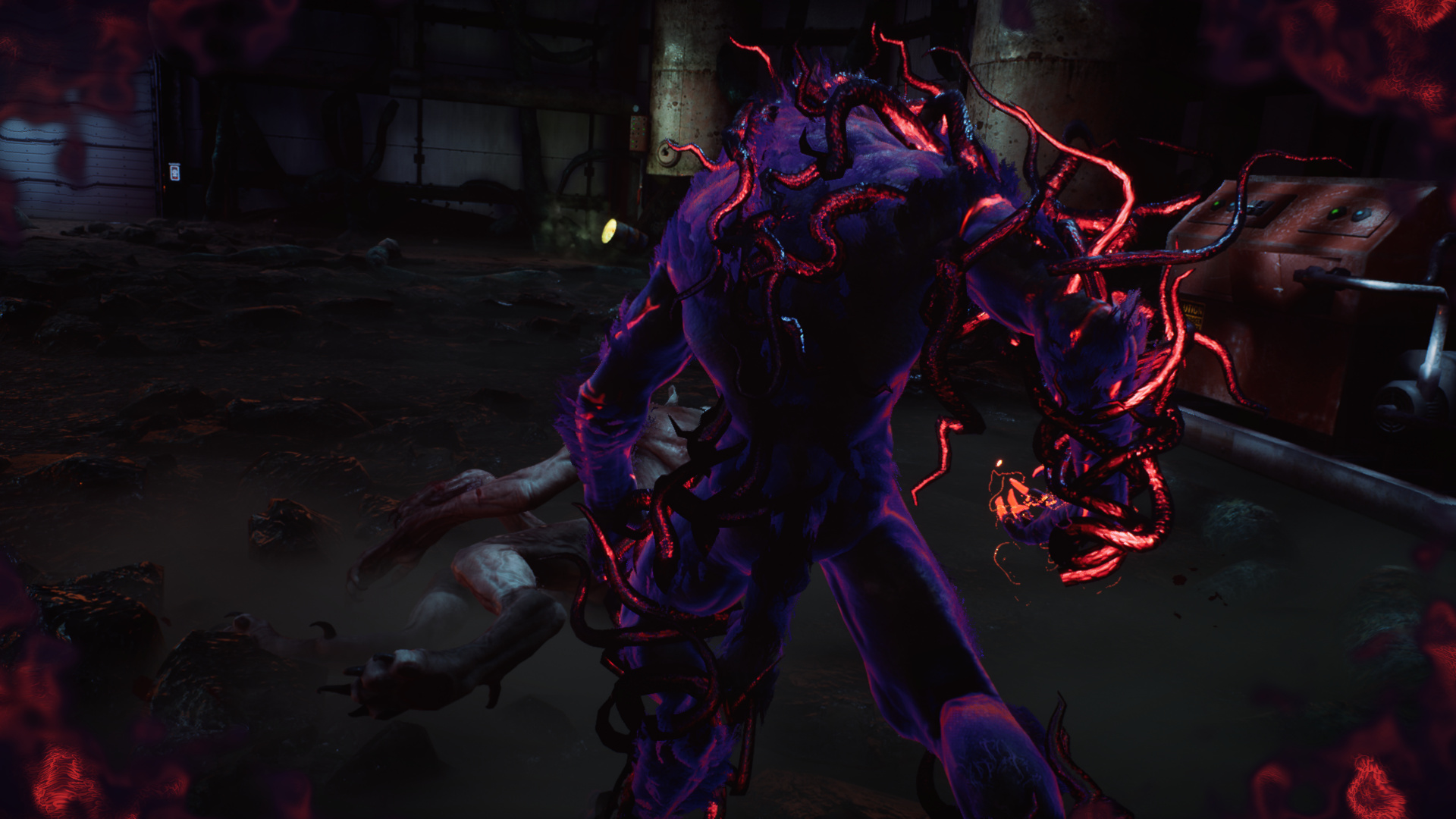 Despite werewolves succumbing to rage being a recurrent theme, you can freely use your frenzy form without narrative repercussions.

Cahil – tattooed, wearing a biker jacket, but never actually seen with a motorbike – finds himself torn between protecting his remaining family or the cairn. With a basic dialogue-wheel system, you can alter what Cahil says during certain encounters, but it has little bearing on the overarching narrative. Cahil wants to do what is best for both his cairn and family, and the narrative progresses in a completely linear fashion until a binary choice in the final moments of the game. Early missions trigger dialogue changes based on whether your approach was stealthy or violent, but the game quickly ditches that idea. There are multiple lines of dialogue dedicated to reassuring Cahil – and the player – that they can play however they like (e.g. the alarms have been disabled, communication has been jammed, your allies will launch a diversionary attack, etc.). It’s streamlined and liberating, but also feels too simplistic for the role-playing genre.

...the narrative progresses in a completely linear fashion until a binary choice in the final moments of the game.

Thankfully, both the stealth and combat mechanics in Werewolf: The Apocalypse – Earthblood are satisfying, even if they too have been streamlined. With the bulk of the game revolving around infiltrating Endron facilities and defeating servants of the Wyrm, you will be forced into periods of stealth or combat, but the bulk of any mission can be tackled as you see fit. If you find yourself in a laboratory full of unwitting human scientists, you can choose to slink around in your Lupus form. On the other hand, if you encounter an outpost of cartoonishly sadistic guards discussing their latest victims, you can shift to Crinos form (think traditional werewolf) and shred them. 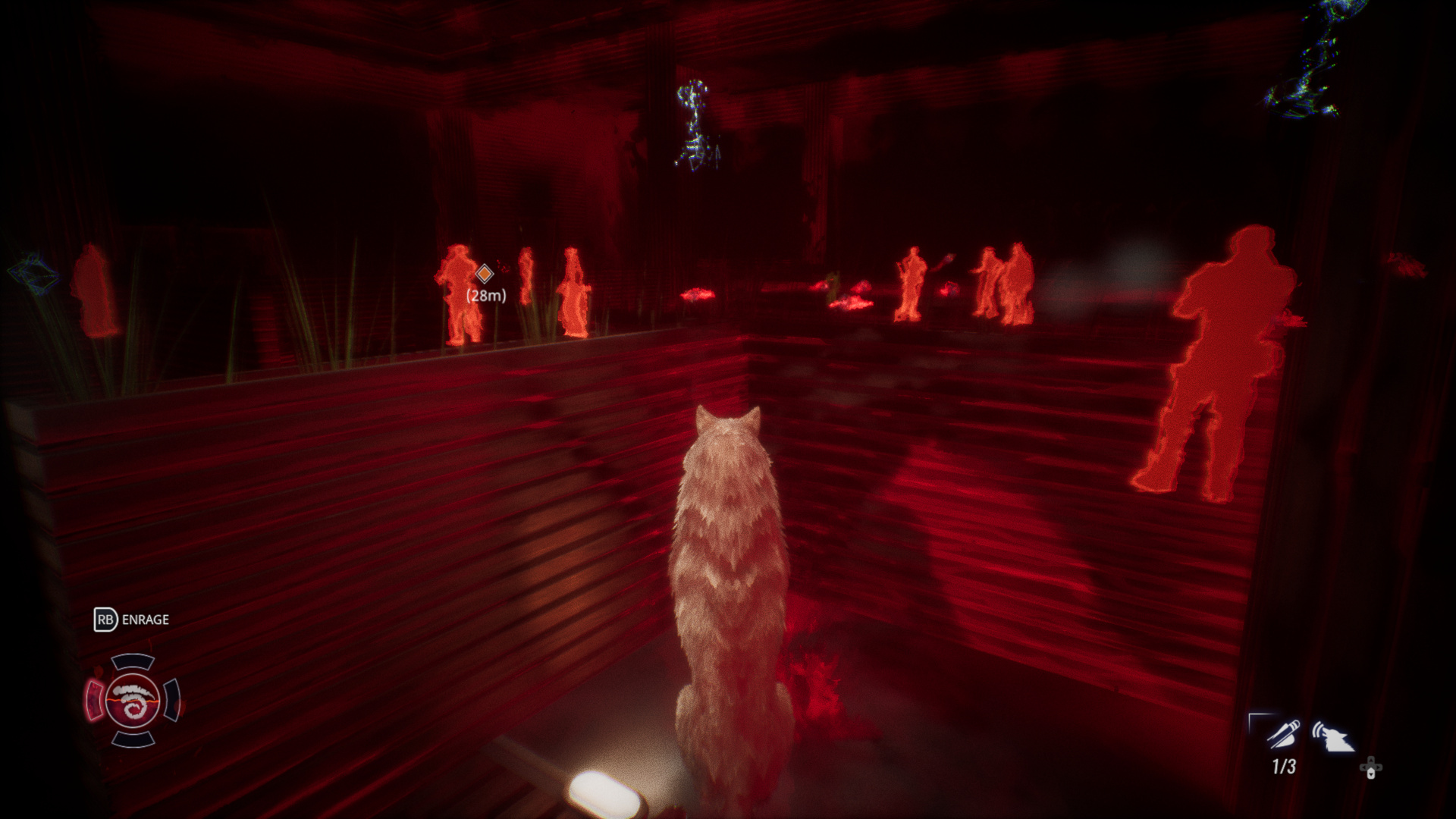 When it comes to stealth, Cahil is a very good boy. Penumbra vision lets you track targets through walls, observe patrol routes, and pick your victims.

Given that how you play has no impact on the narrative, and each area is a self-contained arena with guards that are incapable of hearing a battle one room over, you can freely alternate or combine approaches. Stealth is great for picking off guards packing silver bullets, or sabotaging reinforcement doors before you rush the strongest enemy and trigger a fight. In your human form, there is the opportunity for rare social stealth and dialogue challenges, but the most useful tool is a silent crossbow that can drop isolated guards and, with the right upgrades, knock out cameras if you can’t find a security terminal to shut them down.

...stealth is more about finding the developer-approved path than making your own – but it remained satisfying and become my default approach.

Stealth feels most akin to Cyanide Studio’s third-person stealth-em-ups Styx: Master of Shadows and Styx: Shards of Darkness. Movement in the Lupus form is quick and fluid. Admittedly, your character model doesn’t always feel grounded in the environment, but you can move swiftly from position to position, taking down guards that foolishly lounge behind a stack of crates or patrol past waist-high walls you can drag them over. It feels artificial – stealth is more about finding the developer-approved path than making your own – but it remained satisfying and become my default approach (I love stealth games, so your mileage may vary). 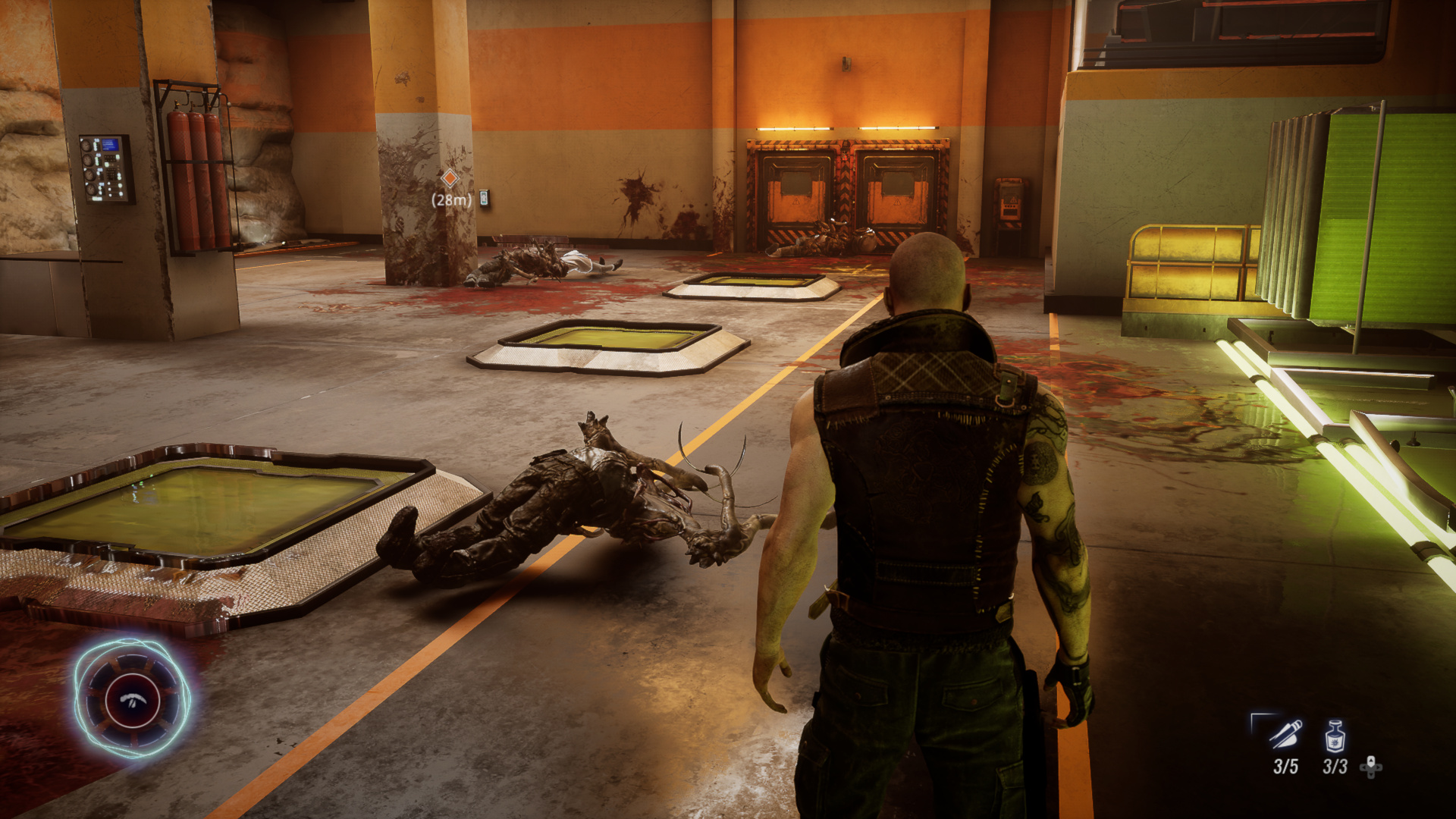 The aftermath of combat is always a sight to behold.

Combat in the Crinos form feels like a loose 3D-brawler and is just as satisfying as the stealth approach. You have an “agile” and “heavy” stance with unique abilities – modified by general and stance-specific upgrades – as well as frenzied state, which can rip through tougher enemies and bosses if you time your transformations right. There is a lock-on toggle for prioritising tougher targets, but the camera is rarely your friend and most fights are messy, button-mashing brawls that leave splashes of gore and corpses littered across the environment. You build up “rage” points – before or during battle – and consume these to utilise abilities that heal or inflict damage. It sounds complex, but the control scheme makes them easy to manage and you’ll only need to master these abilities on the highest difficulty.

Combat in the Crinos form feels like a loose 3D-brawler and is just as satisfying as the stealth approach.

As the game progresses, each subsequent mission area feels larger and more complex in scope (creating more options for stealthy players) and you’ll often have multiple objectives – including several simple sidequests – that you can tackle in the order you choose. These locations are packed with enemies that range from basic guards with ineffectual pistols; shields and taser wielding tanks you need to get behind; rifleman with silver bullets that permanently drop your maximum health; heavily-armed exo-suits; and a myriad of genetically-altered brutes and monstrous servants of the Wyrm. You will also defeat several traitorous werewolves, elite exo-suits, and other mutated creatures that function as “boss” encounters. 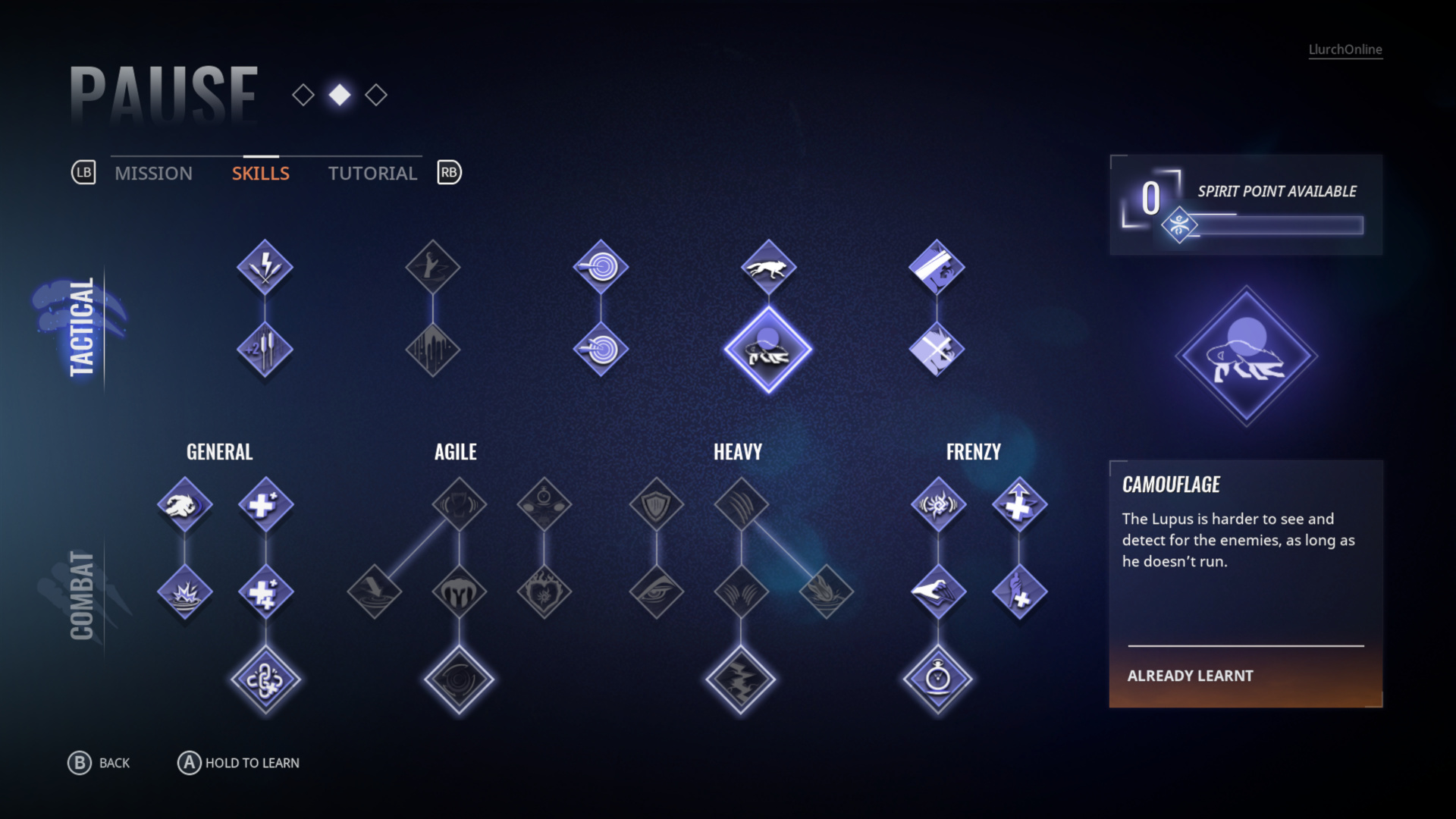 The “role-playing” elements boil down to where you invest your skill points, based on whether you prefer stealth or combat.

When not on a mission, you can meander around your home base, converse with your allies and the cairn spirit, or hunt for trapped spirits using your Penumbra vision (you’ll want to keep an eye out for these as they offer a hefty chunk of XP). Ability points earned with each level go into a simple skill tree, with one path dedicated primarily to stealth and the Lupus form, the other to combat abilities when in the Crinos form (you can freely redistribute them any time outside of a mission). While these semi-open areas provide a break from the dreary industrial environments, there’s little reason to linger before moving on to the next mission.

Visually, it’s functional, occasionally impressive in scale, but then you enter a dialogue sequence with another NPC and start to wonder what console generation this is.

When it comes to the presentation, Werewolf: The Apocalypse – Earthblood is a mixed bag. Visually, it’s functional, occasionally impressive in scale, but then you enter a dialogue sequence with another NPC and start to wonder what console generation this is. Werewolf: The Apocalypse – Earthblood was clearly designed with last-generation consoles in mind – which means excellent performance on the next-gen consoles – so you’ll need to temper your expectations. Cahil’s character model – in any of his forms – has received the most attention, but this means that any dialogue sequence highlights the gulf in quality, revealing stiff, plastic-looking NPCs. In general, missions – regardless of whether you’re stealthing around or tearing through enemies – look good, while the downtime back at your home base highlights many visual flaws. On the upside, the sounds of combat, voice-work, and the soundtrack are of much higher quality. 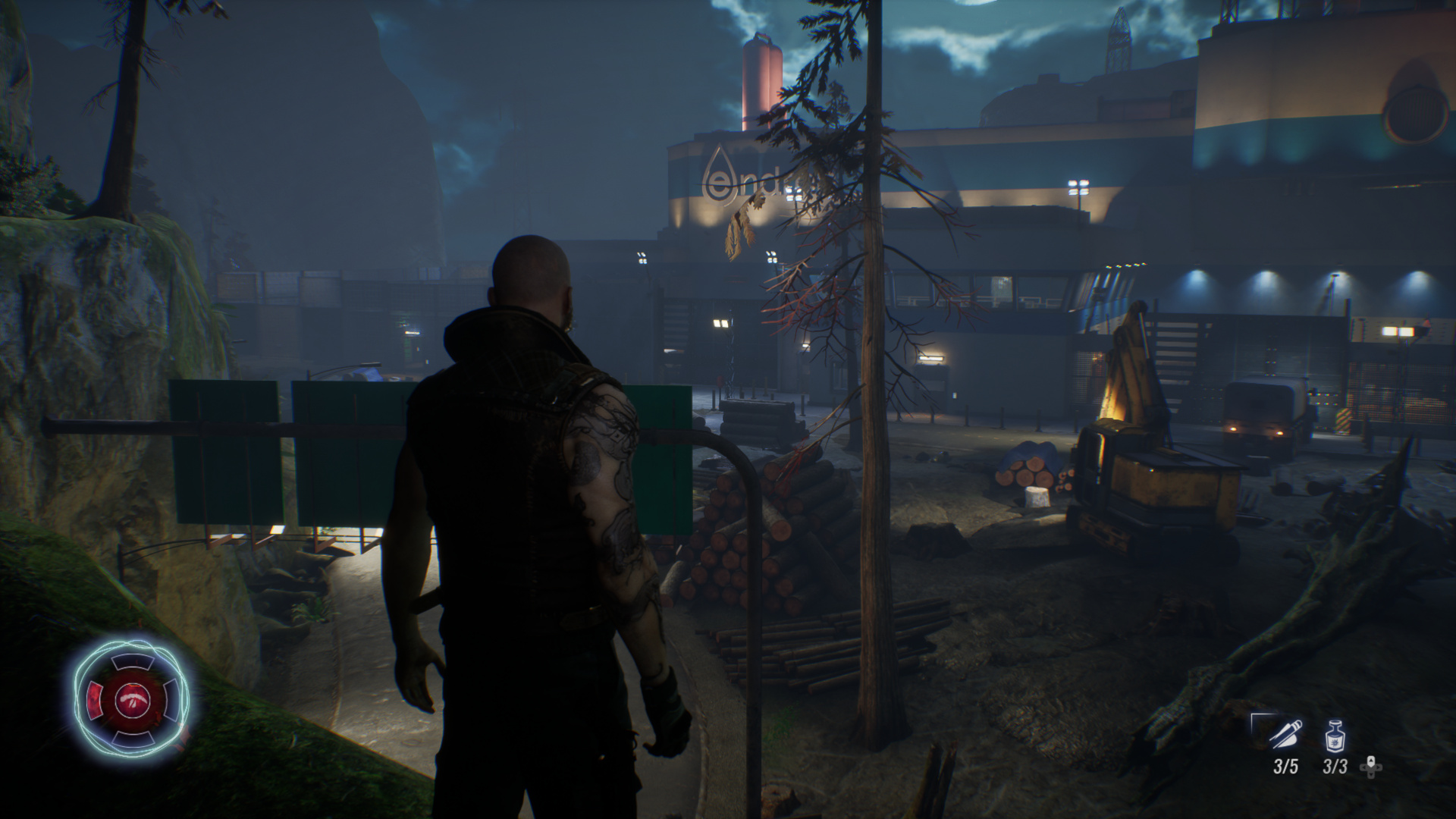 The scale of environments can be impressive, but the art direction is perfunctory at best.

Despite the streamlined nature of so many systems in what advertises itself as a role-playing game, Werewolf: The Apocalypse – Earthblood still provided a solid 15 hours of entertainment (that’s all the sidequests done and 85% of the achievements). As a budget game, the variable presentation is the biggest drawback, but the fluidity of the stealth and combat mechanics, the way you can alternative freely between them, and brisk pacing meant I rarely got tired of infiltrating and tearing apart yet another Endron facility. To reiterate, my biggest issue with Werewolf: The Apocalypse – Earthblood is the fact it released in a market that has already experienced Vampire: The Masquerade – Bloodlines.

Werewolf: The Apocalypse – Earthblood might be fun during minute-to-minute gameplay, but it is seriously lacking in complexity when it comes to actual “role-playing”. You have one protagonist with no modifiable starting skills; there are no relationships that can evolve in different ways; there are no significant branching story outcomes (both endings still lead to a similar outcome); and your upgrades simply improve upon your stealth and combat abilities, but don’t introduce new gameplay options. If you’re after a fun but short-lived action-stealth game, Werewolf: The Apocalypse – Earthblood has enough to offer. If you’re after an experience akin to Vampire: The Masquerade – Bloodlines, you’ll have to hold out for its sequel.

Both stealth and combat gameplay is satisfying

World of Darkness setting is underutilised