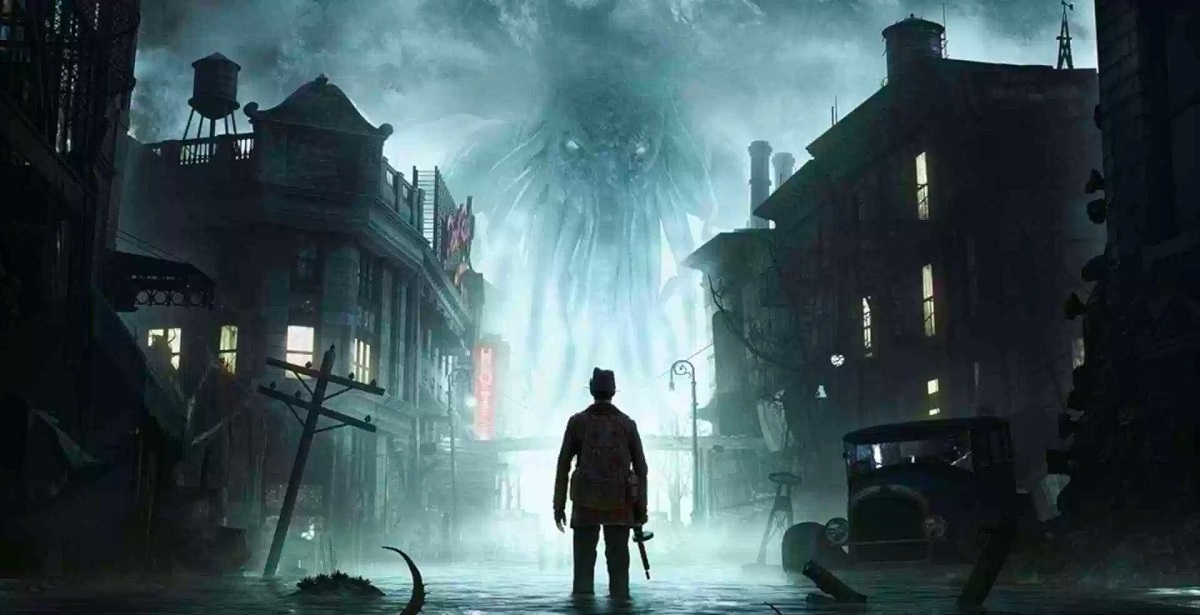 A perpetual fog obscures my vision, obscures too the derelict town before me. Broken and shattered, with muck coloured water turning most of the city into a decrepit Venice while a constant rain pelts down - the coastal town of Oakmont, Massachusetts looks like a victim of both the Great War and the Depression. If I’m here to save this city, then I’m afraid I’m too late. Oakmont, mostly sunken beneath danger infested waters, looks well past saving.

I button up my coat, pull my hat harder down on my head and trudge forward through the dirt and blood. I’ve got my work cut out for me. 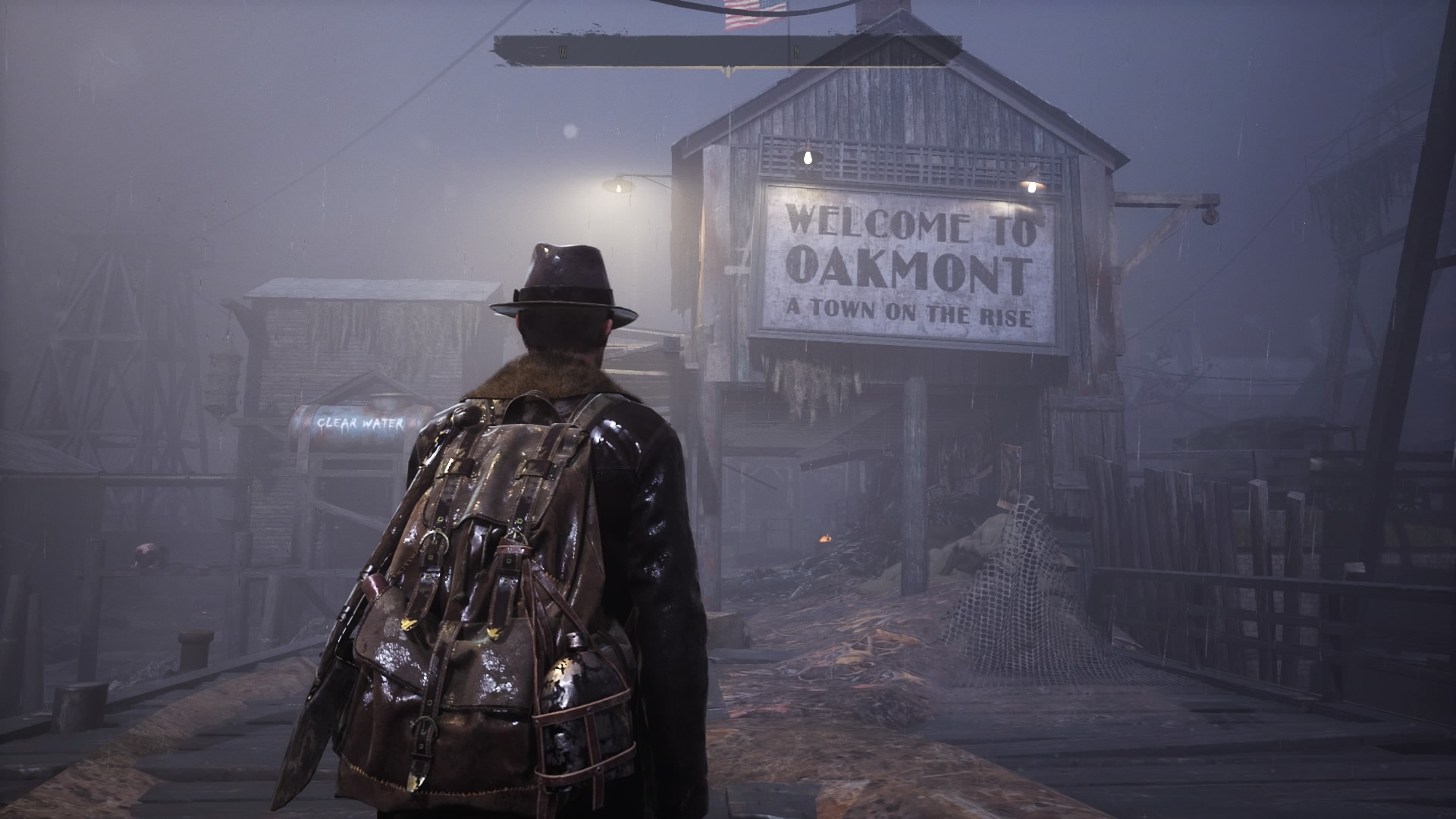 The Call of Cthulhu and The Shadow Over Innsmouth are the driving adaptations behind the stories narrative, but lesser known stories such as Facts Concerning The Late Arthur Jermyn And His Family, take centre stage as well. Beyond that, the game is chock full of easter eggs for other classic Lovecraft, and his contemporaries, Mythos stories and characters. 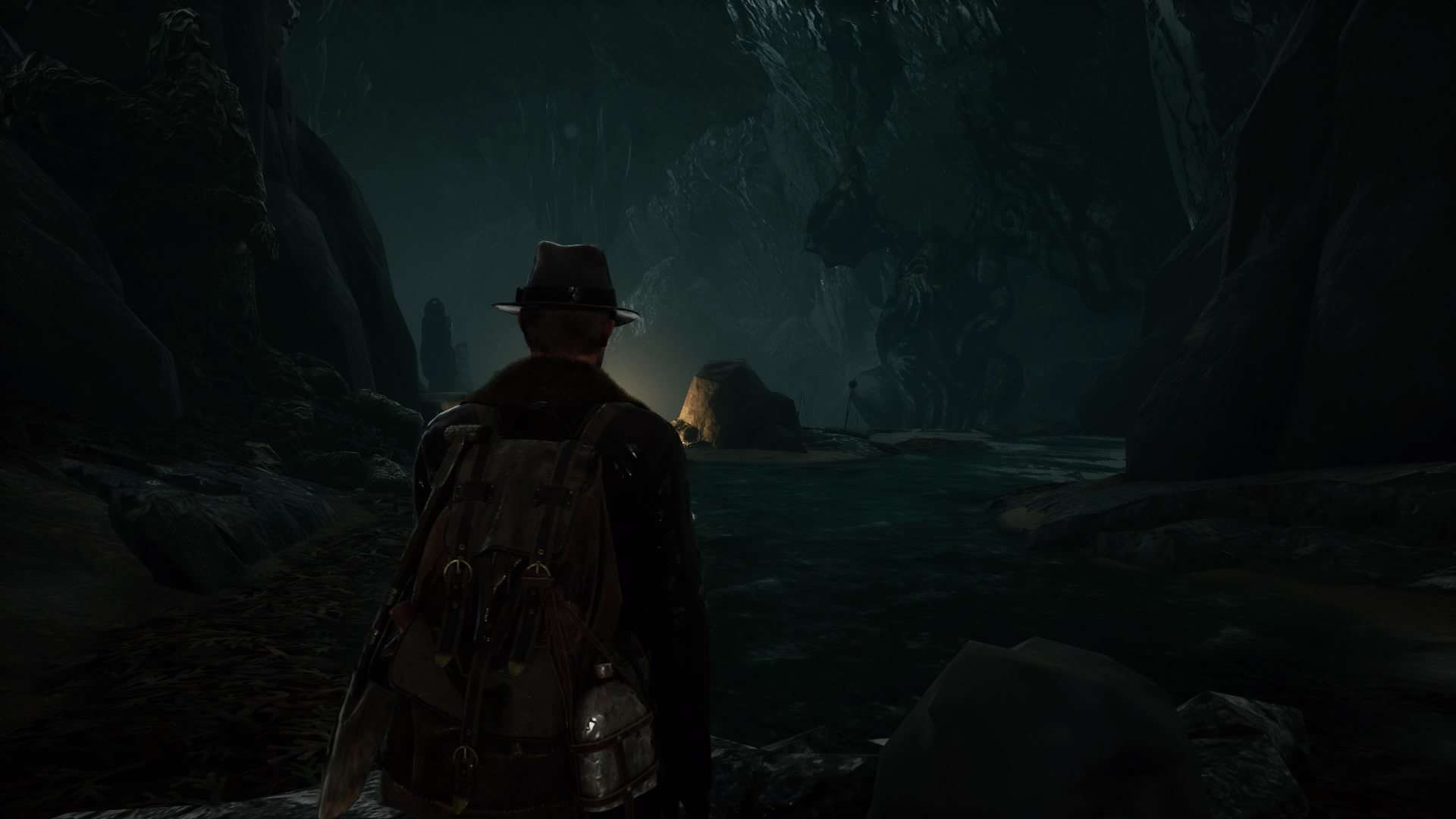 As Private Investigator Charles W. Reed, a veteran of the Great War, you make your way to Oakmont searching for people who have disappeared from across the country while trying to find the source of the terrible visions you are having. Fresh off the boat, you’re dumped into the broken cities class and race wars, hatred for outsiders and murders - both mortal and supernatural - that the local constabulary are either ill-equipped or no longer care to deal with.

At first glance, The Sinking City is overwhelming in its no hand holding approach to gameplay. Oakmont is quite large to explore and what connections you’re supposed to make in the cases aren’t spelled out for you. Once you’ve completed the games first hour, which acts as a tutorial, you’re mostly left to your own devices to figure the clues out and where you have to go next.

Much has been said about Frogwares desire to make you use the old grey matter to work through the game, but it seems some concessions have been made to gaming convenience by giving gamers six difficulty settings; three for the detective work and three for the combat. Combat speaks for itself when it comes to encounters, dealing with enemy damage but the detective difficulty settings are a little nebulous. On easy you’re given more hints on when you’ve discovered all the evidence in a location and when you have to make case connections to further the plot, while medium and hard simply remove the notifications at various levels. Either way, you still have to make the connections yourself and find your own way around the city. 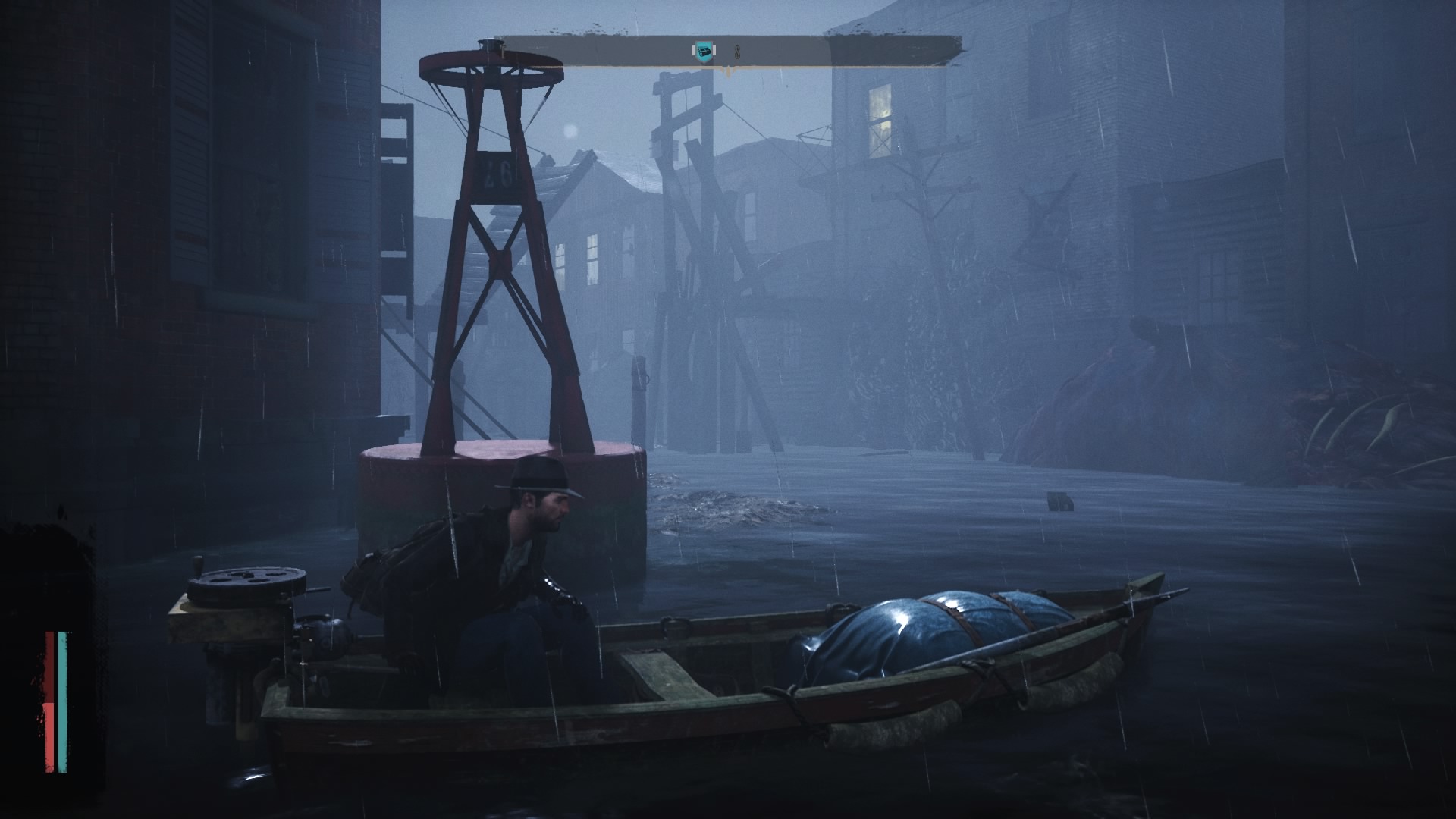 The truth is that, the detective side of the game, which is completely enthralling, isn’t really all that hard to work out. Everything works logically, with all the hints you need to take you around Oakmont given to you in the clues you hear or the conversations you have. Need to find a criminal who has no address but does have a history of similar crimes? Then search the police archives until you find the addresses for known associates, and so on. The system tests you’re cognitive thinking abilities more than forcing you to figure out obscure puzzles to open a door locked with mistletoe.

Reed has his own psychic abilities, which help when solving cases. Visiting crime scenes can let you see visions of the past, setting up a diorama of images you have to solve in the correct order of events. These “detective mode” moments are cool, but far too easy. Clues are logged in your casebook and when you have enough you can visit Reed’s Mind Palace, a screen where you put the major clues together to form your conclusions. This is where it gets even more interesting as, while it’s difficult to find the wrong culprit, you can, however, come to the wrong conclusion behind the crimes driving force.

Like Dontnods’s Vampyr, nothing is ever so black and white...

It gets even more interesting as the bulk of the games narrative is choice driven. You can choose to turn people in, lie about who committed the crimes and, at seminal points, choose who to help which leads you down a murkier, thoroughly questionable path about the ends justifying the means. Like Dontnods’s Vampyr, nothing is ever so black and white, and while it doesn’t go into as much detail about some of the games characters, there’s enough information about the people whose lives you’re affecting to make you stop and think about you’re decisions. Do you throw that guard who was supposed to be patrolling a burgled warehouse under the bus even though you know he was crafting good quality toys to give away to the local orphanage upstairs at the time? 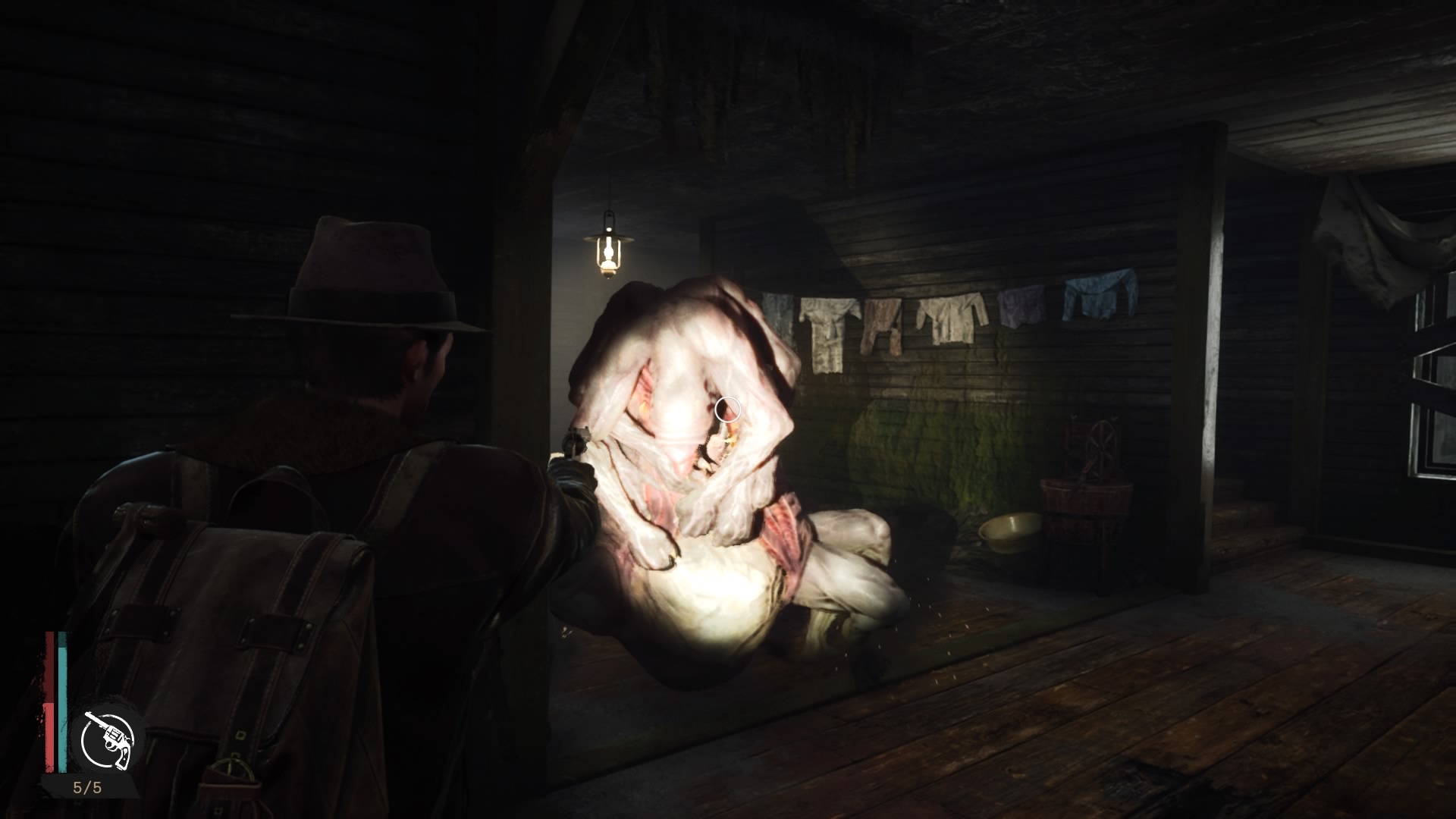 Cases, at first, seem harder to find, as does finding your way around. Get used to using a map screen to plot your locations because you’re going to be in it a lot. A little bit of exploration though, and you’ll be sorted on picking up extra work outside of the main plotline. There’s a lot of back and forth here, as befitting a gumshoes job, which makes unlocking the fast travel points a must. It may seem tiresome running between multiple locations per case, but it fits Reed's vocation. Solving cases also unlocks extra outfits for Reed.

Getting around Oakmont is primarily on foot or by boat. The bulk of the cities streets are waterlogged and, between the abrupt endings to streets and the perpetual fog, I was reminded of Silent Hill as I traversed the games various districts. You can swim if you want to, but the waters are infested with creatures that will chow down on you and affect your sanity.

Visually the game looks better after its delay, though the frame rate is fairly choppy. Character models look great for the main ones and the voice acting is mostly good. Some areas definitely look better than others and the sense of a city on the edge of collapse is palpable. Detritus lines the streets, along with rotting fish and octopi, and the mangled remains of sharks and whales that have become snacks for much larger, ocean dwelling leviathans. Mostly, Oakmont looks like a bomb has hit it. 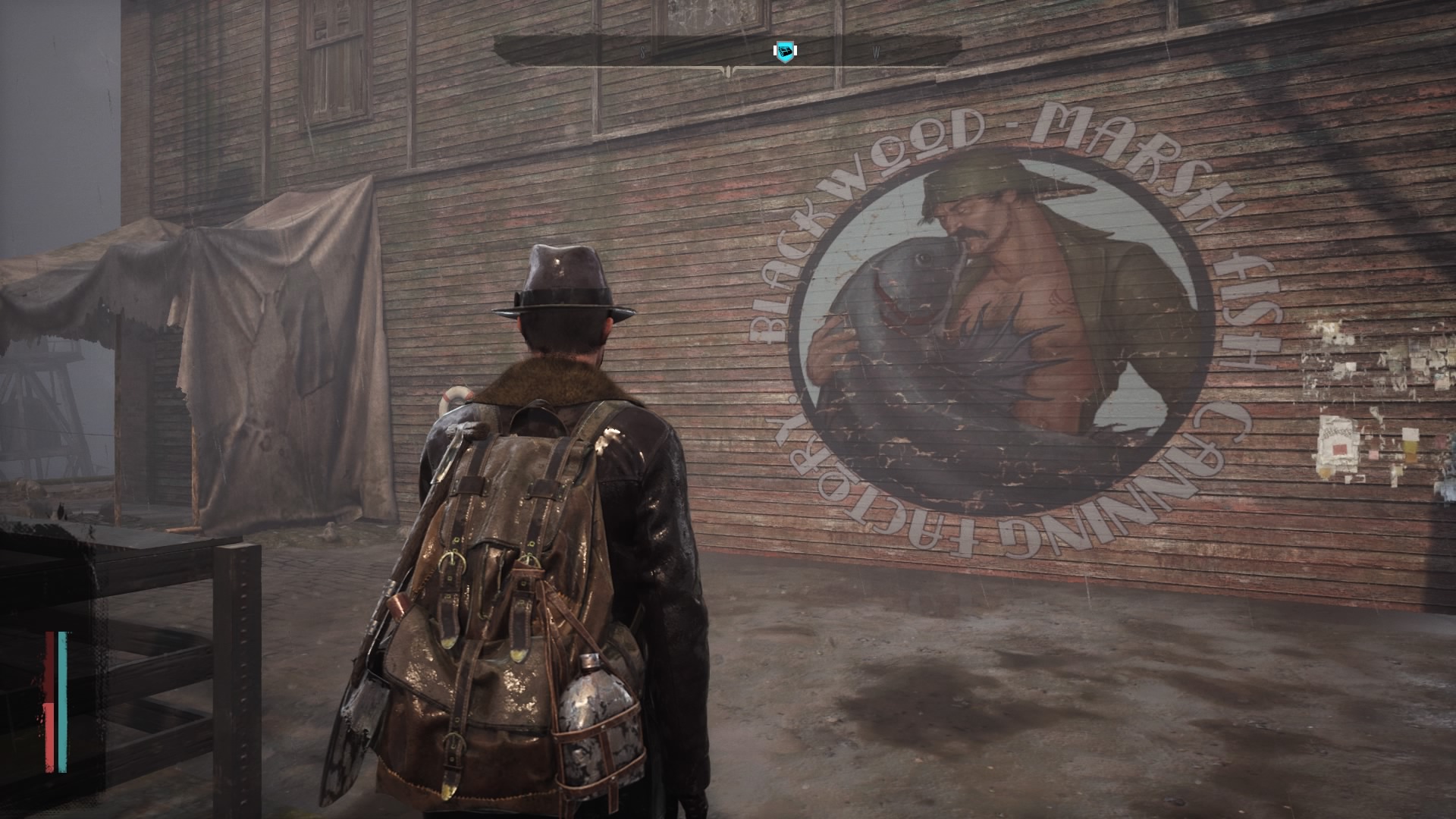 Citizens fight over scraps, cultists walk around proudly, some get shot or stabbed in side alleys and public suicide doesn’t bat an eye. Watching an NPC proclaim “Goodbye and thanks for all the fish!” just before blowing his brains out was both unsettling and morbidly humorous.

One of the games major issues in city design is that Frogwares have built the city using a procedural generation tool, so while the architecture looks great and era appropriate, you will find repeating buildings and internal areas, which makes it a little harder to navigate when a lot of it actually looks the same.

Watching an NPC proclaim “Goodbye and thanks for all the fish!” just before blowing his brains out was both unsettling and morbidly humorous.

Combat is, by far, the weakest part of the game. It’s basic, at best, even with some extra additions like the ability to lay traps. The system could have used some more refinement than simply point and shoot. While the enemies, which are nicely grotesque in design, aren’t particularly smart, they do a pretty good job of dodging your attacks. I often found it best to lure them into chokepoints, such as through a door, and plug them from the relative safety of the other side. Even set to easy, they can tear you up pretty good with some of the larger enemies capable of one-shotting you.

Resources, at first glance, seem pretty generous. Bullets are the new cash here and you’ll find plenty of crates and locations to scour various parts to make medikits, traps and ammo from, along with gaining them as quest rewards, but once you start to explore the abandoned buildings, or enemy infested areas of the city, they dwindle pretty quickly. It’s not a survival horror game, but you want to manage your resources and make sure each shot counts.

You’ll also earn XP to spend on enhancing Reed's skills, such as more health, more salvage carrying capacity and for critical hits. You only need a thousand XP points per attribute point. 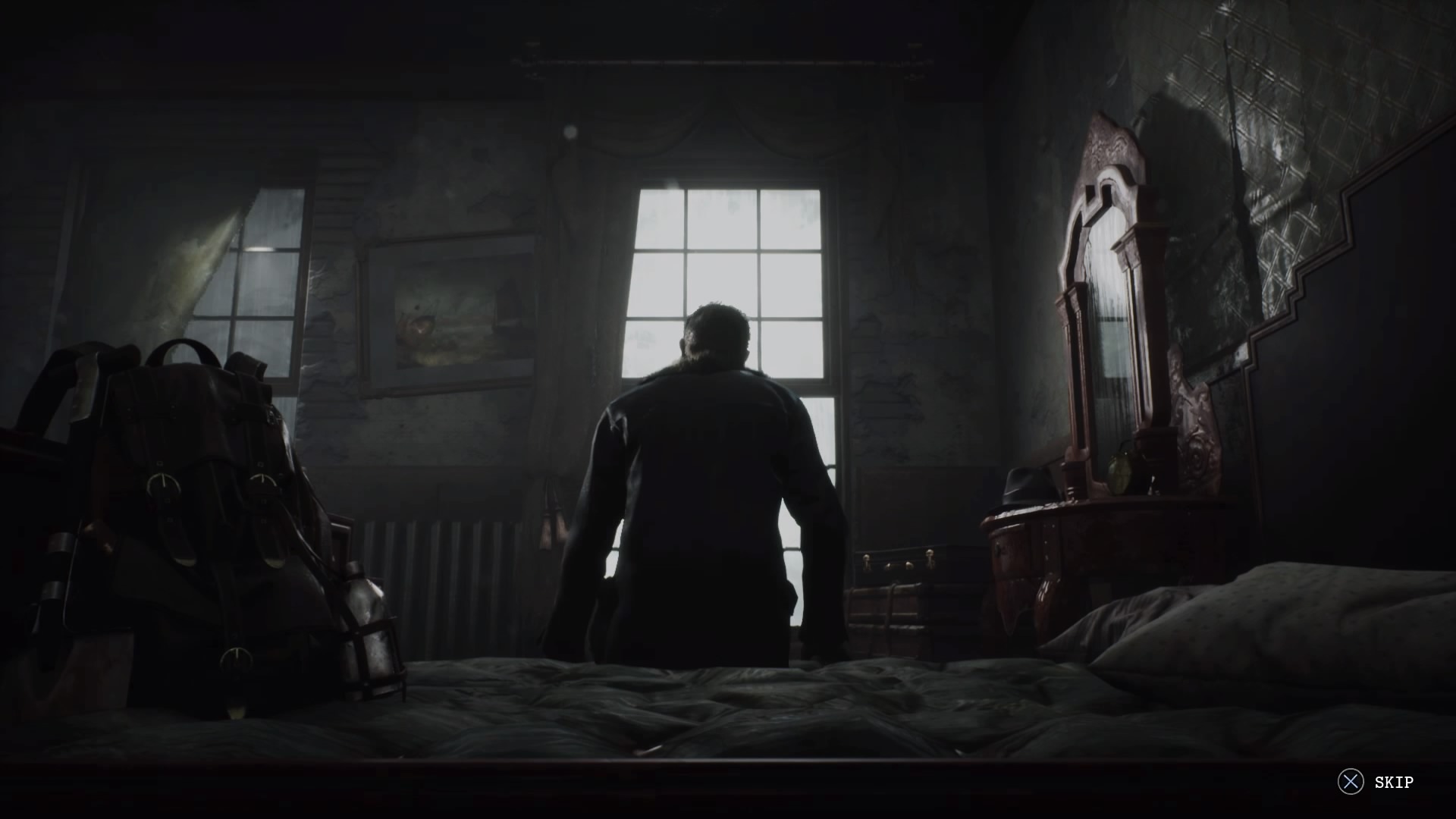 One of the major points in the Mythos is how encounters with the Beyond affect humans. Reed has a sanity meter which drops as you use his psychic skills, stare at gruesome scenes too long or are around monsters too much. The screen warps with a fish eye lens perspective, making combat harder and the edges of Reed's vision swim with various monster overlays. It’s not as effective as it could have been as, while Reed will occasionally swat the air pointlessly, I never truly got him to lose control. But then it wasn’t in my best interest to let his sanity meter bottom out either. Having his vision go for an ocean dive while in an enclosed area though, did create a nice sense of claustrophobia.

Like 2018’s Call of Cthulhu videogame, The Sinking City will most likely prove to be pretty divisive. It feels like it was designed with Mythos fans in mind, especially those who love the detective aspects of the boardgames. And like Call of Cthulhu, which feels like the other half of this coin, is not only one of the better Mythos games since Dark Corners of The Earth, but also a fantastic groundwork upon which to lay a universe of Mythos games.

The Sinking City took a while to get its hooks into me and, once I got past some of it’s issues, especially the combat, I found myself thoroughly enthralled by its compelling narrative, exploration and puzzle solving gameplay. I became invested in seeing Reed's journey through to the end, wondering how the choices I’d made had affected it, and what I would see in a different playthrough with a different set of choices. Ancient underwater ruins, sleeping gods, people turning into monsters, there’s Mythos magic at work here so answer Cthulhu’s call and get cracking.
8

Blaze
@Lurch Yep that comparison is a big selling point. Will be picking this up soon.

Coffeboy
gamers are in desperate need of a silent hill type of game, will keep my eyes on this one, just need to get through my back log ..

Lurch
Soon as I get around to completing Call of Cthulhu, I'll be picking this up right afterwards. Looks great and I love the atmopshere in these games. The comparison to exploring Silent Hill is a fine compliment.

KnightFall500
I think I need to start playing these games!

Blaze
Got Call of Cthulhu and The Sinking City to satisfy my Lovecraft gaming tendencies. Great review! 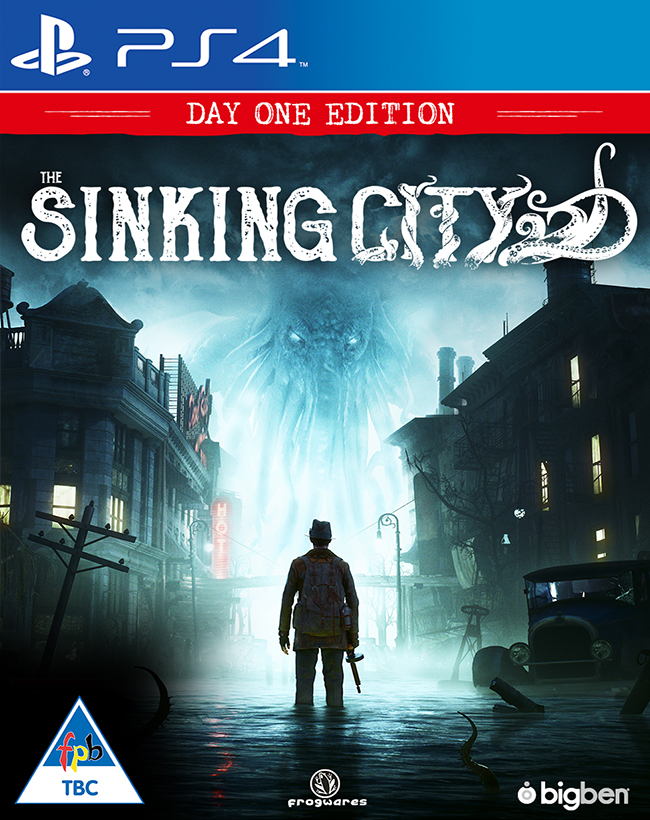