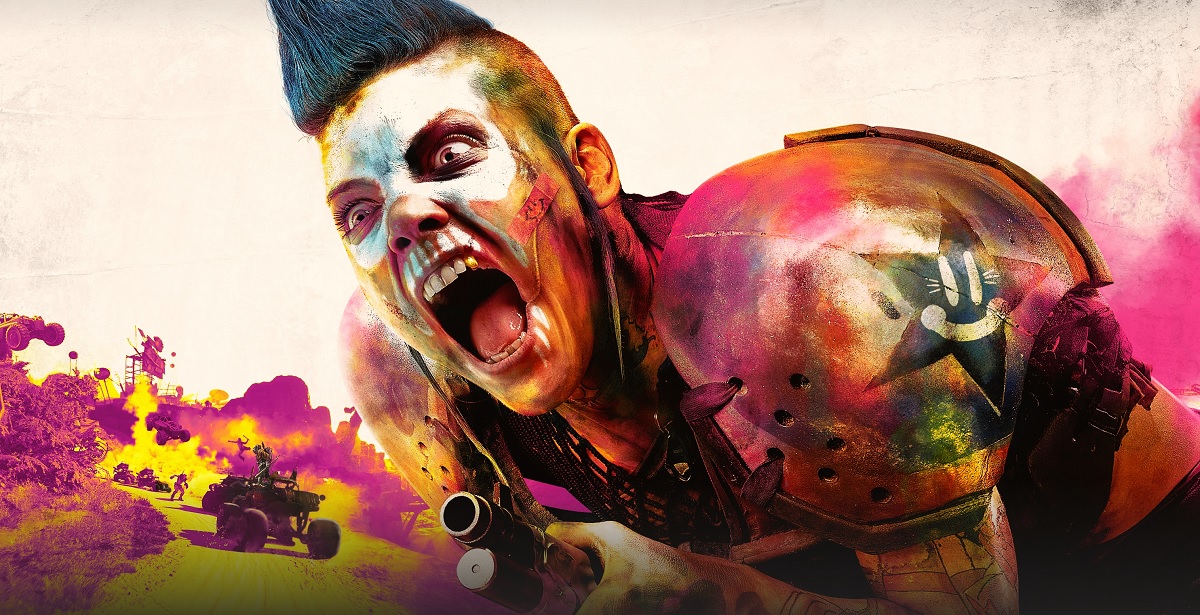 I hadn’t played the first Rage back when it dropped in 2011. As an id Software fan, this was an oversight that I tried to correct a couple of weekends ago. I’m glad I missed it on release. Don’t get me wrong, the shooting as always was top notch, the driving - a first for id - was not bad, but the world was just so much lifeless brown meh. Rage 2, this time developed by both id and Avalanche, of Just Cause and Mad Max fame, follows much of the same template, for better and worse.

The game starts you off under attack by "The Authority", an organisation that arose after an asteroid hit the earth. These men and women believe that the asteroid was an opportunity to cull the weak from humanity, and that humanity’s best hope lays in cybernetics. To that end, this faction has replaced most of their body’s with various cybernetic limbs and parts. Their leader, General Cross, is your typical mega maniacal monster hell bent on world domination. Of course, you, as Ranger Walker, are humanity’s last and only hope, after Cross and the Authority wipe out the Rangers, leaving you as the lone survivor, the only one able to use nanotrites and all the superhuman powers that it confers on you. Disappointingly, they did not pay Chuck Norris all the money in the world to voice the male version of Walker, an opportunity that is unlikely to ever come around ever again. 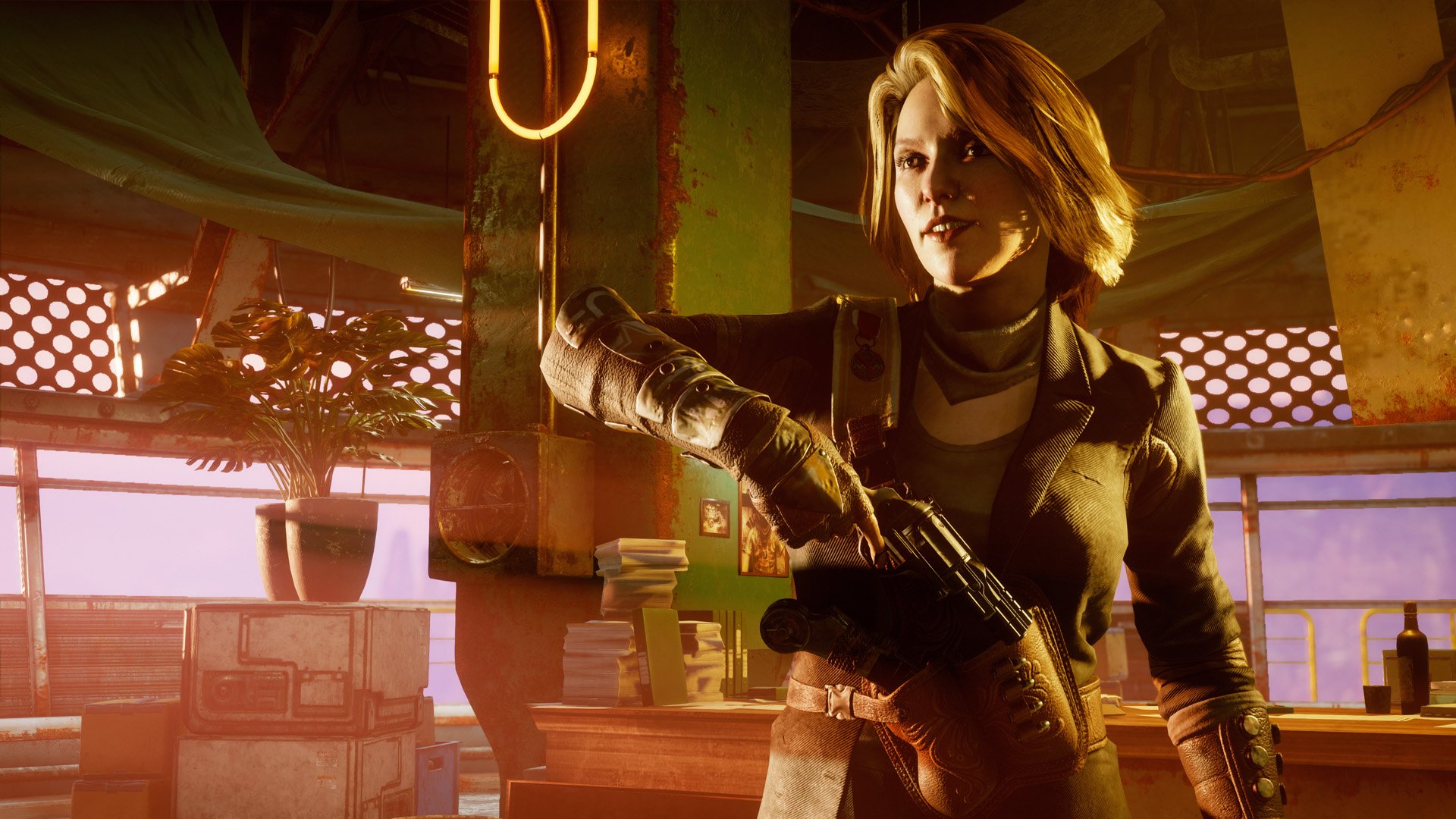 And that is where the problems with the game begin. The story is lacklustre at best, a rote by-the-numbers lone-saviour story that pushes you from mission to mission, but is so stereotypical that you just don’t follow or care to read into any of the log entries that could add flavour to the world. I can honestly say that Walker’s motivation is something that I did not consider once. All I knew was that Rage 2 required me to complete certain missions, in order to restart "Project Dagger", so that I could progress to the final boss battle against Cross. Walker’s history as an Ark survivor, or was it the child of Ark survivor’s, isn’t expounded upon, except as the reason as to why he or she has nanotrites in their blood, and can thus use Ark tech - be they weapons or abilities.

Where the game shines, in a testament to id’s FPS history and Avalanche’s Apec Engine capabilities honed in the Just Cause series, is in gunplay. Firefights are visceral, fast-paced and, most importantly, exciting. Running around blasting away at bandits, mutants, and The Authority is never dull. The game moves at a pace that rewards reflex trigger-pulls rather than careful consideration of tactics and cover. Using the wingstick is just as much fun as the demos and trailers suggest. Watching that bladed death-stick fly at and destroy an enemy never gets old. Add to that the various nanotrite powers, that'll either devastate your enemies or get you out of a sticky situation, and you have a combat system that will keep you entertained for hours on end, and will have you wanting to play through the side missions, simply to engage in more combat.

The game moves at a pace that rewards reflex trigger-pulls rather than careful consideration of tactics and cover.

A shooter, even one with wingsticks and superpowers, is nothing without compelling guns and Rage 2 has them in spades. Even the basic pistol is fun and effective when you run out of ammo. My personal favourite is the Ark Shotgun. In tight spaces, against those damnably fast and agile mutants, it saved my bacon innumerable times. During the Mutant Bash TV rounds, it made light work of the little buggers, making it easier to cut through armour, especially with the secondary knockback slug-shot. 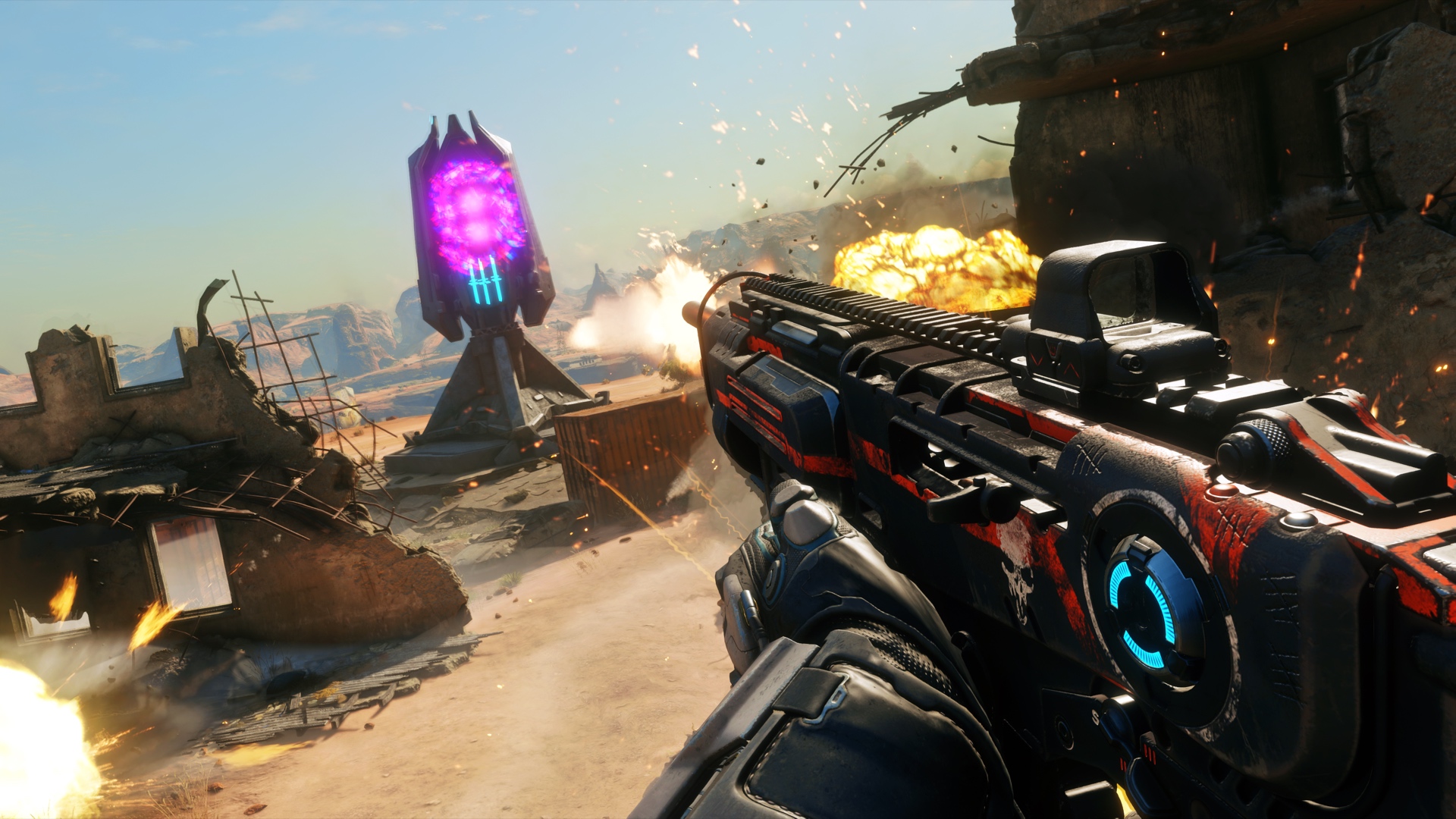 Overall, first-person combat is fast, albeit not at insane as 2016's Doom blink-and-you’re overwhelmed pace. It is satisfyingly brutal, but not overly gory, though the way mutants gib when you melee them is a bit over the top. Enemies have a decent variety to them, with the mutants using swarming tactics, the bandits trying to outflank you, and The Authority just trying to brute force their way at you. Encounters are challenging but never too difficult, either in terms of enemies or navigation. Each arena is designed to allow you to find breathing space, but never a place to hide. Skillful movement is essential, along with an itchy trigger finger. If you stop, you die, it’s that simple.

The cars feel heavy and ponderous, and even when you use the boost, the sense of speed is just not there.

As a sequel to Rage, and as a game co-developed by Avalanche, you would think that the driving in Rage 2 would be near perfect. However, I found it dull and just a little sluggish. The cars feel heavy and ponderous, and even when you use the boost, the sense of speed is just not there. Add to that you don’t have Rico’s insane grapple to jump between vehicles, and the mechanics feel like a missed opportunity at bringing that madness to this world. Even vehicular combat, a major selling point of the trailers, is somewhat lacklustre. The mechanics just don’t feel as fast or as good as the first-person shooting. 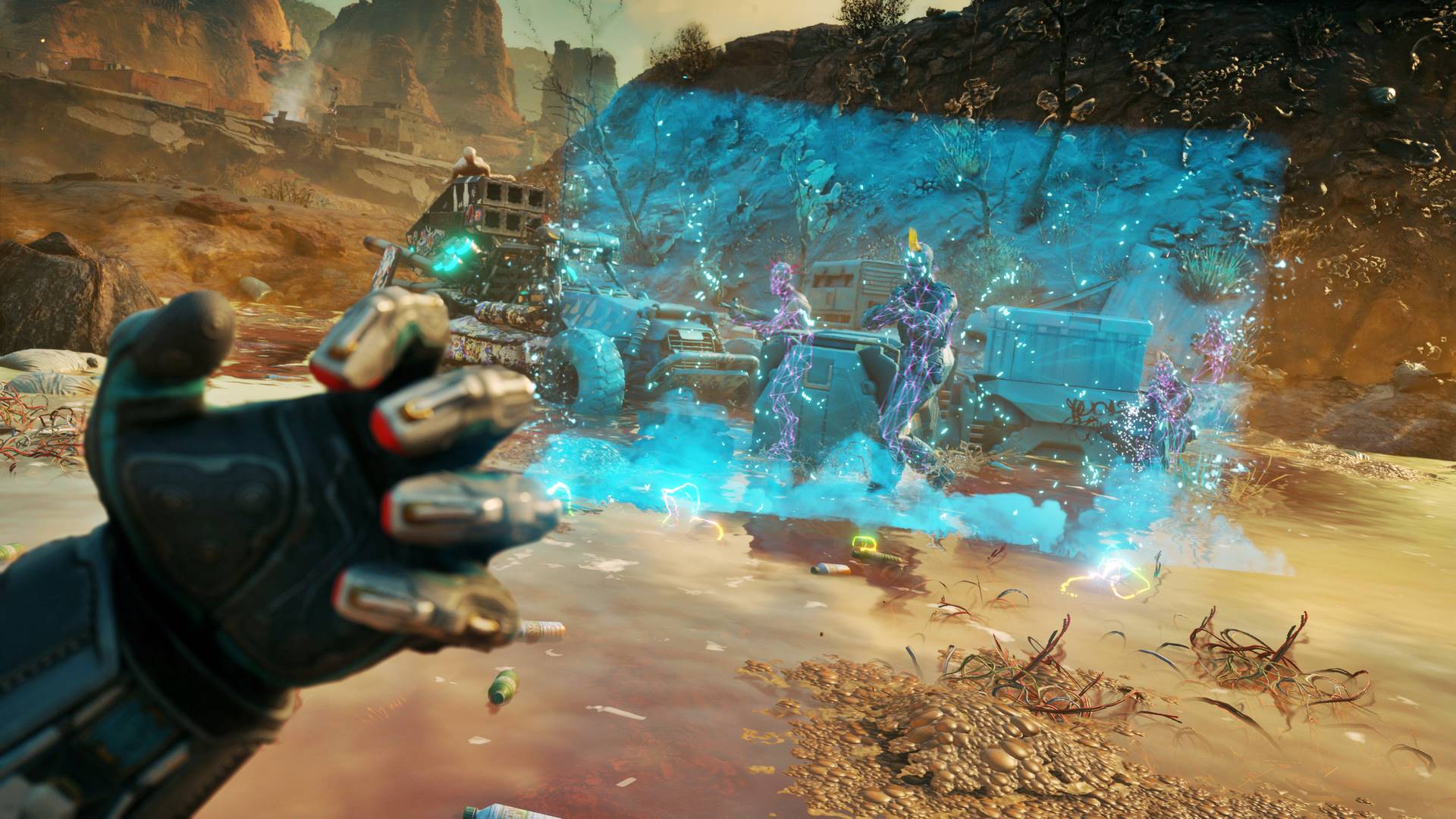 Adding to the sensation that driving is boring is an open world that is just not populated with anything worth exploring for. Of course, events happen as you drive through: Authority drones land and attack bandits and you, bandits attack you on the road, and there are of course the little side missions - such as fuel depots and roadblocks to clear - but none feel natural or as part of a world that exists outside of something that is there to challenge you. With modern open-world games like Assassin's Creed: Odyssey you get the feeling that the NPCs carry on with their lives when you aren’t around and, if you were able to come back and spy on them at any point, they would still be engaged in something not at all connected to you or the story that you are progressing.

The only reason I had to explore was to find Arks, which contain new weapons and nanotrite abilities, most of which you will need to take down Cross in the end. The world is populated with trivial side missions - taking out bandit camps, FedEx quests and actual drive from Point A to Point B to deliver packages - but they just aren’t compelling. You complete them to gain items and project points to upgrade abilities, weapons, and other RPG-lite stats.

Graphically, I am glad that the game follows on from Far Cry: New Dawn, adding significant amounts of vibrant colour to the world. Instead of the first game's drab shades of brown, you get greens, pinks, blues, and all other shades in-between to complement the drab browns. It makes the world just that little bit more visually interesting. 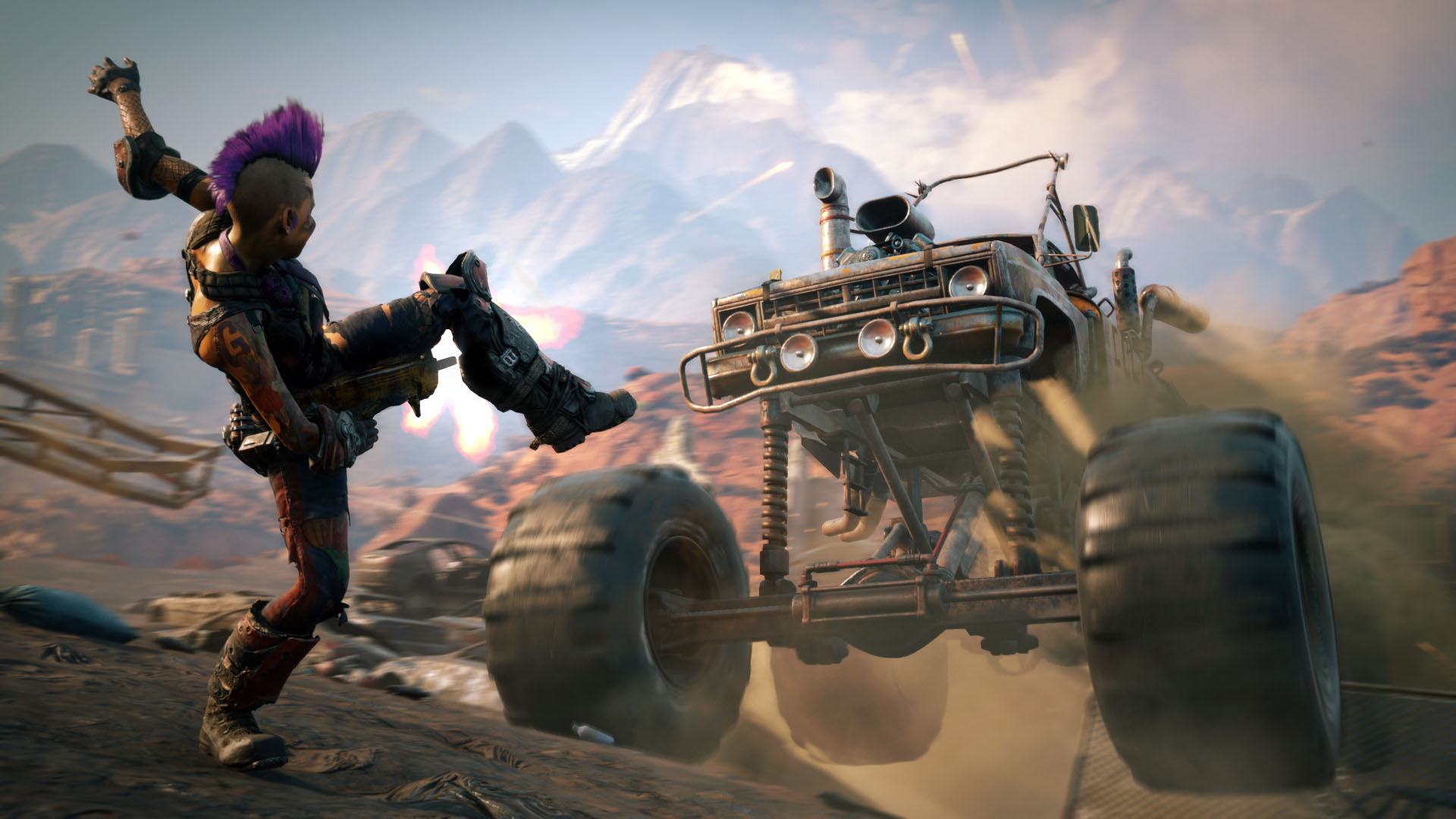 Unfortunately, on the PS4 Pro, I did experience some bugginess, from sound dropping out during a cutscene when I was receiving mission info, to freezes and crashes, to the next waypoint in a mission not activating, forcing me to reload the last auto-save. Luckily, the game saves often so I rarely had to repeat much, though it was too often for my liking. I did notice some frame rate drops, but nothing detrimental to my enjoyment. The game runs natively at 60FPS, but this is limited to the PS4 Pro and Xbox One X (locked at 1080p) and, of course, PC. The base consoles run at 3FOS (1080p on PS4, 900p on Xbox one), and only the PC version has 4K support. A higher framerate is preferable to higher resolution, especially in a game as fast as this one and as reliant on twitch reactions as much.

Rage 2 is a great twitch-shooter, an okay driving game, and a boring open-world game. The story doesn’t serve the game in a manner that makes it compelling, or lift it above your generic shooter, and that is a pity as the idea behind this world could be interesting and engaging. How did humanity not locked away in Arks survive? How did they form these communities and recover technology, and how did they come to know about these hidden Arks and the survivors? These are all questions that the game could answer with some attention paid to writing, but unfortunately neither id Software not Avalanche did, and mores the pity.

The Wingstick is the best weapon ever created!

Driving is no fun 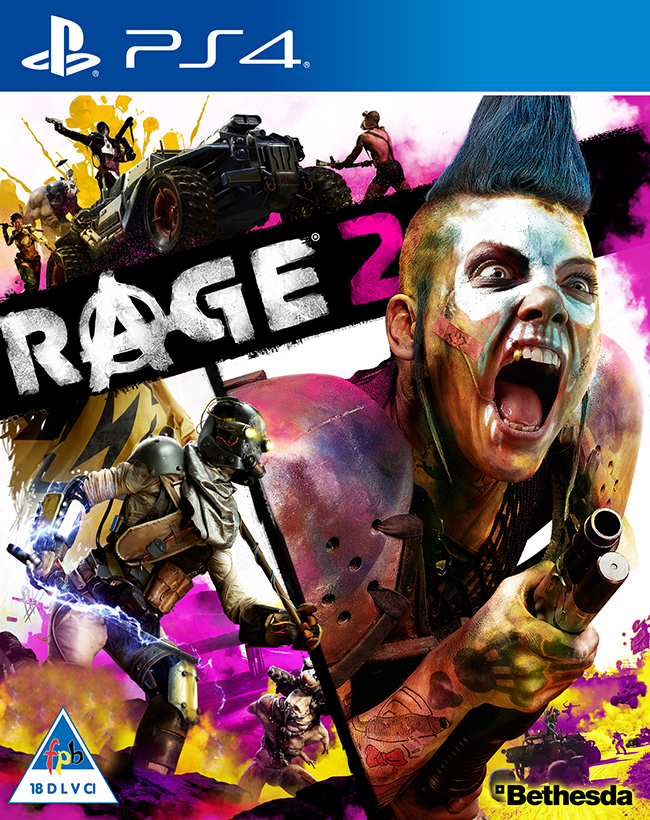