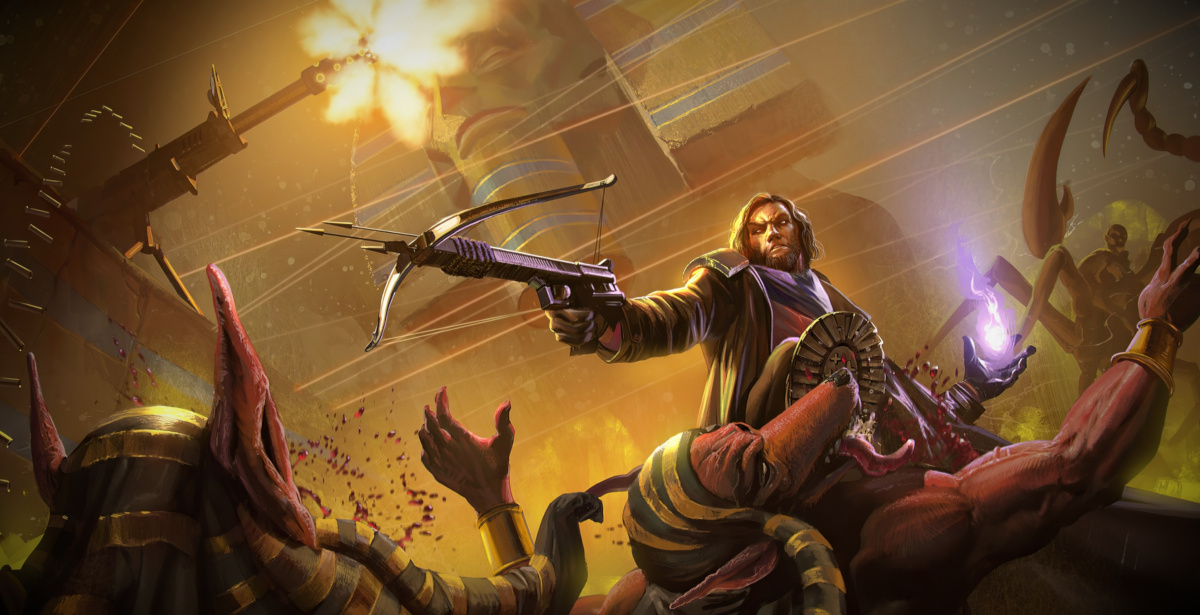 The last few years have seen a resurgence of retro first-person shooters, from a myriad of developers both big and small. Project Warlock, which started life as a one-man high school passion-project, caught my eye for its distinctive art-style, brutally-paced and violent gunplay, and, honestly, the price point. When I first picked it up on GOG, I was amazed at just how good Project Warlock for a fifth the price of “AAA” game. Admittedly, unlike many of its peers, it’s a purely single-player experience, with a focus on mastering different weapons, difficulty levels, dodging projectiles, and secret hunting for upgrades. However, it still offers a more compelling package than most of its peers. It's finally arrived on all the consoles, so I thought I’d pick it up and offer a more comprehensive review.

Just like the classic games from which it draws inspiration – DOOM, Hexen, Blood, and even a bit of Serious Sam – Project Warlock is light on narrative. You get a wall of text after each act, giving some insight into the motivation and personality of the titular Warlock, but that’s about it. You’re then thrown into a dozen thematically-connected levels, slaughter a giant boss at the end, and move on to the next wall of text. Thankfully, the narrative framing is entirely unnecessary, as Project Warlock more than impresses with its gameplay and presentation. 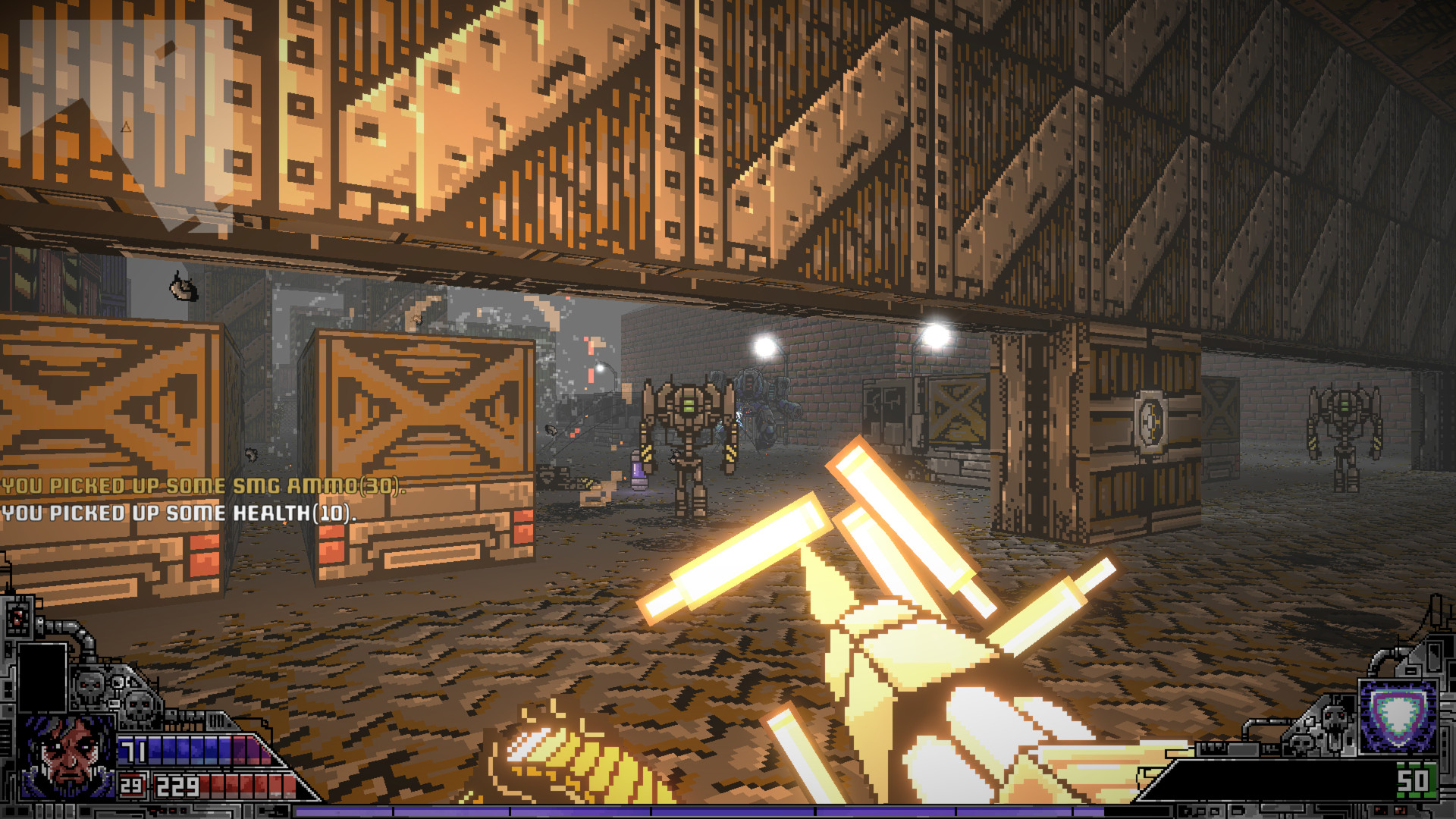 There's rarely a moment in Project Warlock when you won't be holding down the trigger.

Project Warlock does a great job of emulating the movement, gunplay, and key-hunts of classic FPS games, while also stuffing the environments full of secrets. That said, it’s not simply a retread of old ideas. Every few levels, you’ll return to your workshop to stock up on ammunition, health, mana, and engage with a simple but impactful progression system that allows you to improve your basic stats (and add a few perks), or use “unlock stars” - found in each in each level - to either a) unlock spells, or b) upgrade your weapons by picking one of two wildly-different, mutually-exclusive modifications.

Project Warlock has some arcade-like elements, with five difficulty settings, a “lives” system on every difficulty except “Casual”, and no mid-level saves. These difficulty settings and the prospect of secret hunting (which ties into the number of upgrades you'll unlock over a single run), are what will bring you back in the absence of any cooperative or competitive modes. Also, despite sounding intimidating, there are dozens of extra lives to be found (unless you completely eschew secret hunting), and the blistering pace of movement and combat means that very few levels exceed 10 minutes in length (and that was at the leisurely, secret-hunting pace of my first run). The console version of Project Warlock benefits from several rebalancing patches, so experienced FPS players should consider moving up to “Hard” right away. 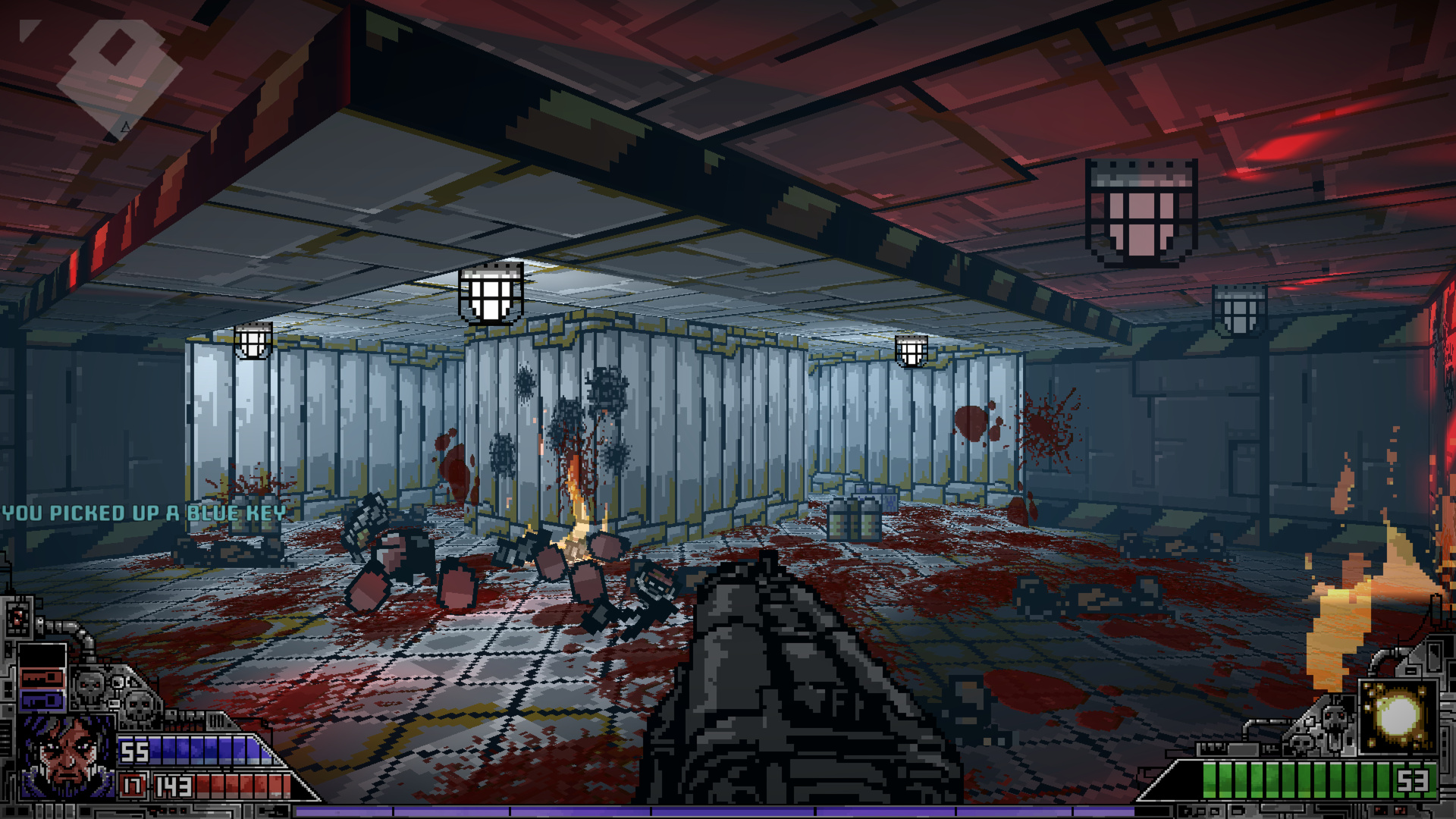 The aftermath of any firefight is always a sight to behold.

You’ll spend 95% of your time in Project Warlock moving and shooting, and what a glorious experience it is. It can take a little time to get used to the player speed and lining up your shots – you should rarely turn off “always run” and absolutely lock the Y-axis – but soon you’ll lose yourself in a blur of winding corridors, multicoloured keys, hordes of enemies, booming gunfire, colourful gore, and a fantastic head-bobbing soundtrack (easily the biggest downside to picking up Project Warlock on consoles is the fact you don't get the soundtrack for free).

Levels vary from open arenas to labyrinthine corridors (often incorporating both), so you always need to be aware of your surroundings as being swarmed, especially on higher difficulties, means death. Much like the classics it pays homage too, Project Warlock can be unforgivingly brutal, with positioning and dodging projectiles often more important than aiming (there are mercifully few hit-scan enemies, and all of them must move into range before firing). You’ll be dashing in and out of rooms, pre-emptively firing while turning corners, kiting enemies into explosive blasts, and generally wreaking havoc at breakneck speed. 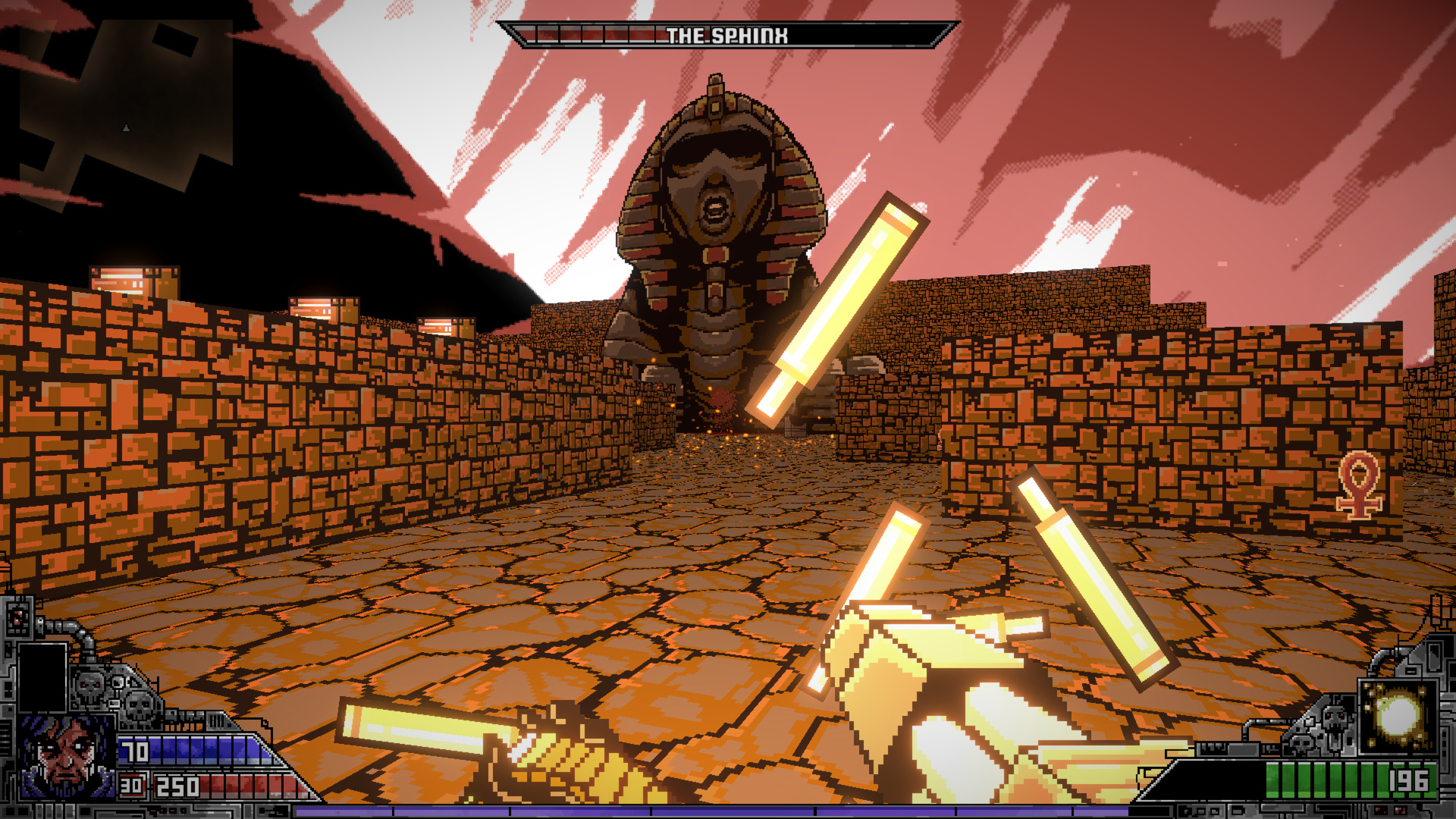 If you're behind the curve on upgrades, the boss fights will punish you for it. Thankfully, a "stage select" option allows you to go back and hunt for missing secrets.

There aforementioned weapon upgrades and spells can drastically alter your approach to combat, even though they only feel essential when playing on “Hard” and above. Basic weapons are genre-staples (think pistol through rocket launcher) and pack a solid punch, with enough versatility to get you through any encounter – be that thinning out mobs or quickly racking up damage on an elite or boss encounter. Once you add some modifications, however, gunplay becomes more complex and entertaining.

The basic pistol can be upgraded to a.50 Magnum, making it an excellent fallback weapon for tough foes; the double-barrelled shotgun can be upgraded to a flak cannon, firing superheated shards that set enemies alight; the basic SMG can be upgraded to a nail gun, firing ricocheting rounds that allows you to clear out rooms from around corner; the minigun can become a deployable turret to cover your rear. Spells are less interesting, yet still range from a offensive lightning orb that clear out mobs, to a defensive shield that feels vital on higher difficulties when you're dropped into the thick of an encounter. It all adds up to a diverse and evolving experience. 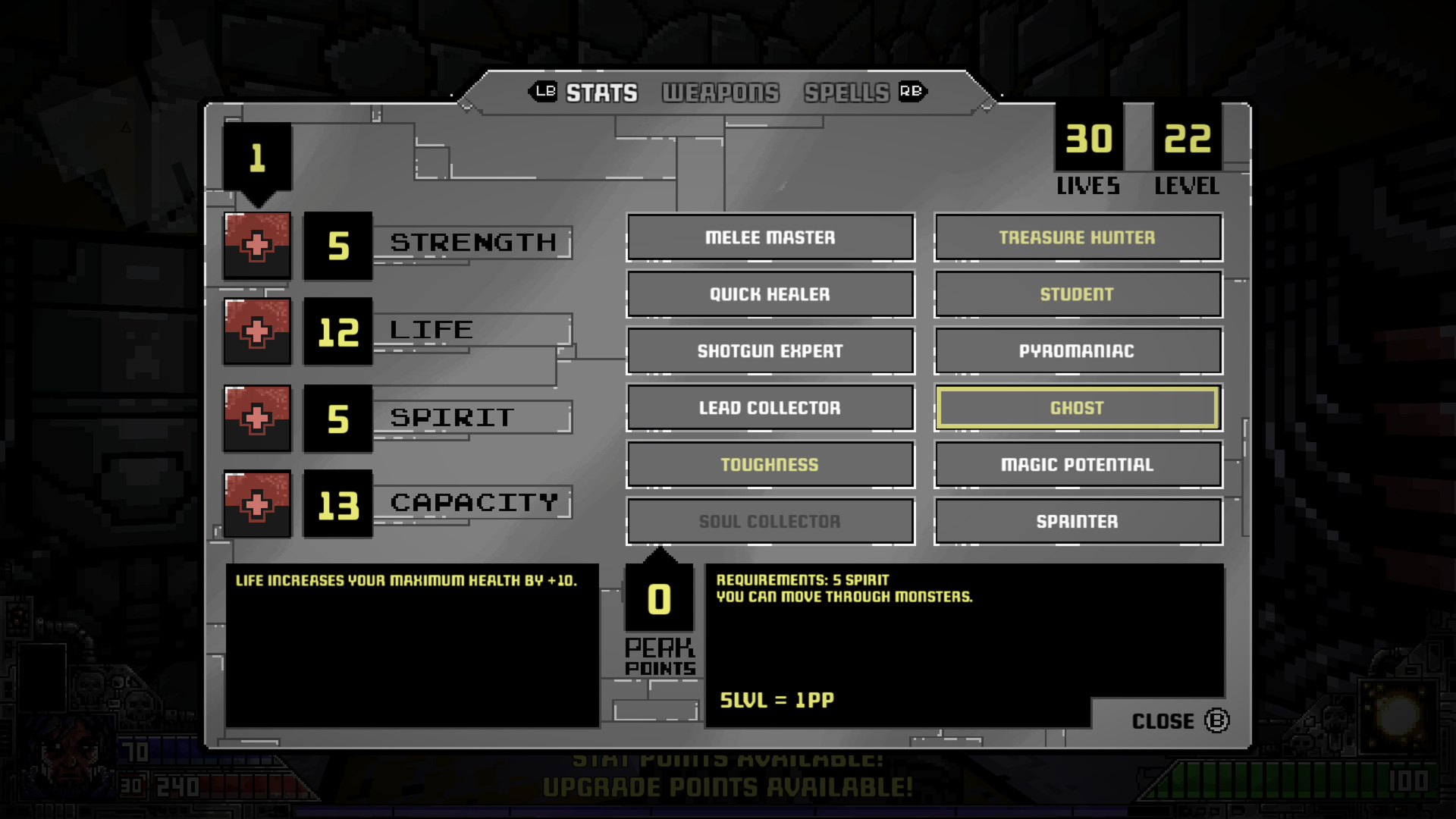 The progression system involves boosting a few stats, rare perks, spells, and, most significantly, weapon mods. It's fairly simple, yet impactful, and a modified weapon can drastically change how you use it.

Content-wise, you get five acts with a dozen levels apiece, each act thematically and visually distinct, with their own style of collectibles. You’ll explore a medieval castle full of the undead; tear through an Antarctic research base packed with creatures straight out of The Thing and Cthulhu mythology; go up against mythical creatures in Egypt, battle through modern industrial complexes with mechanized infantry and robotic foes; and finally, blast through Hell itself – a twisted take on prior acts with no shortage of DOOM-inspired denizens. The levels are well-designed, often looping back on themselves, and packed with secrets that both offer extra lives and upgrade stars, but also provide paths that allow you to bypass locked doors. It was a breezy campaign for me at around 6-7 hours, but speedrunners will get a kick out optimizing routes using the shortcuts you can find.

The visuals look distinctly retro and pixelated by default, with some detailed and destructible sprite-based objects and monsters, however, the Unity Engine powering the game also provides “modern” lighting and particle effects that greatly enhance the experience – primarily by splattering the walls and floors with the blood and entrails of your demonic foes. That said, while the violence is gratuitous, it veers towards over-the-top and comedic. In a rarity for console ports, you also have granular access to tweak every element of the retro filters to your own preference. Performance on an Xbox One S was solid except for a few levels in the Industrial act, where longer draw distances and dozens of enemies produced noticeable slowdown. Thankfully, a brief survey of user impressions and forums suggest all versions run well, the majority of the time.

It’s great to see a high school passion-project evolve into a crowd-funding success on PC, and finally, make its way onto the massive console marketplace. It also helps they stuck to the $12-equilivant price point for this release – far cheaper than most of its peers yet packing in a ton of content and quality. If you’ve enjoyed Bethesda’s rereleases of the classic DOOM games on consoles, this is a must-play, and I only hope more indie retro-shooters make their way to console quicker.

Performance issues on a few levels