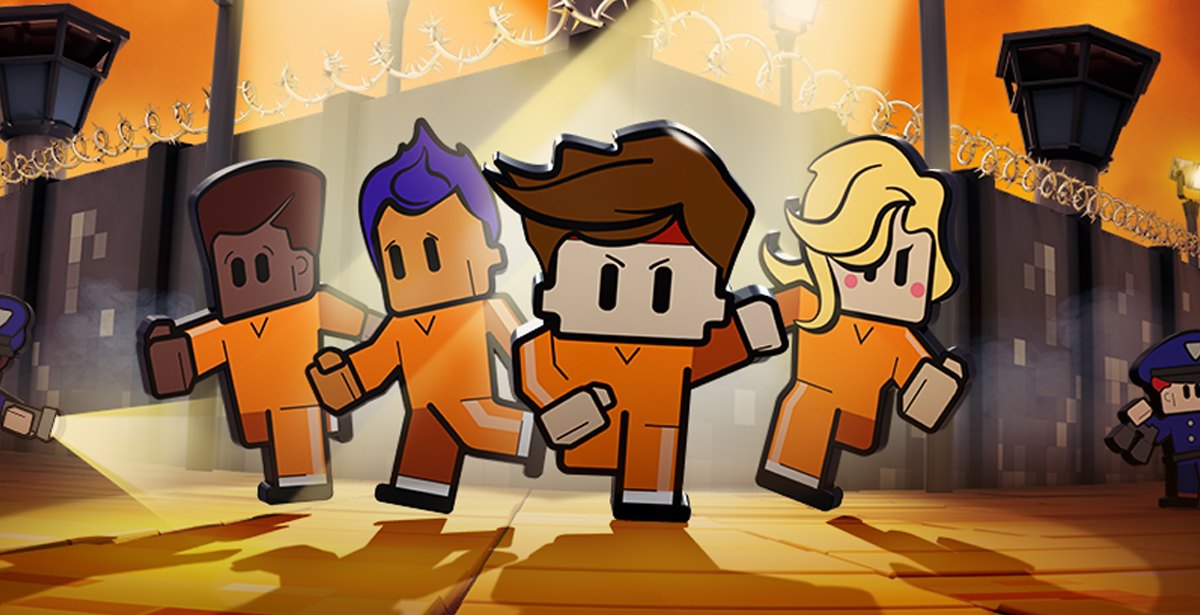 The Escapists 2 is a game that I have had difficulty with. Ostensibly an action-RPG, in reality, it's more of a puzzle game. The puzzles being your path to freedom as you attempt to break out of increasingly complex and secure prisons.

The game starts off in the tutorial prison, a quick ten minute prison that gets you up to speed with the mechanics. You are instructed on each step, from getting to the mess for food, to crafting items - in this case a sock with a bar of soap in it to make a makeshift weapon. The tutorial lulls you into a false sense of how easy the levels are as it fails to introduce you to the "favours" and "prison store" mechanics. All you do is knock out a hapless fellow prisoner, grab his key so you can get into a room and claim a pickaxe, before tunnelling to a storeroom, and finally crawling through vents to freedom. Simple. 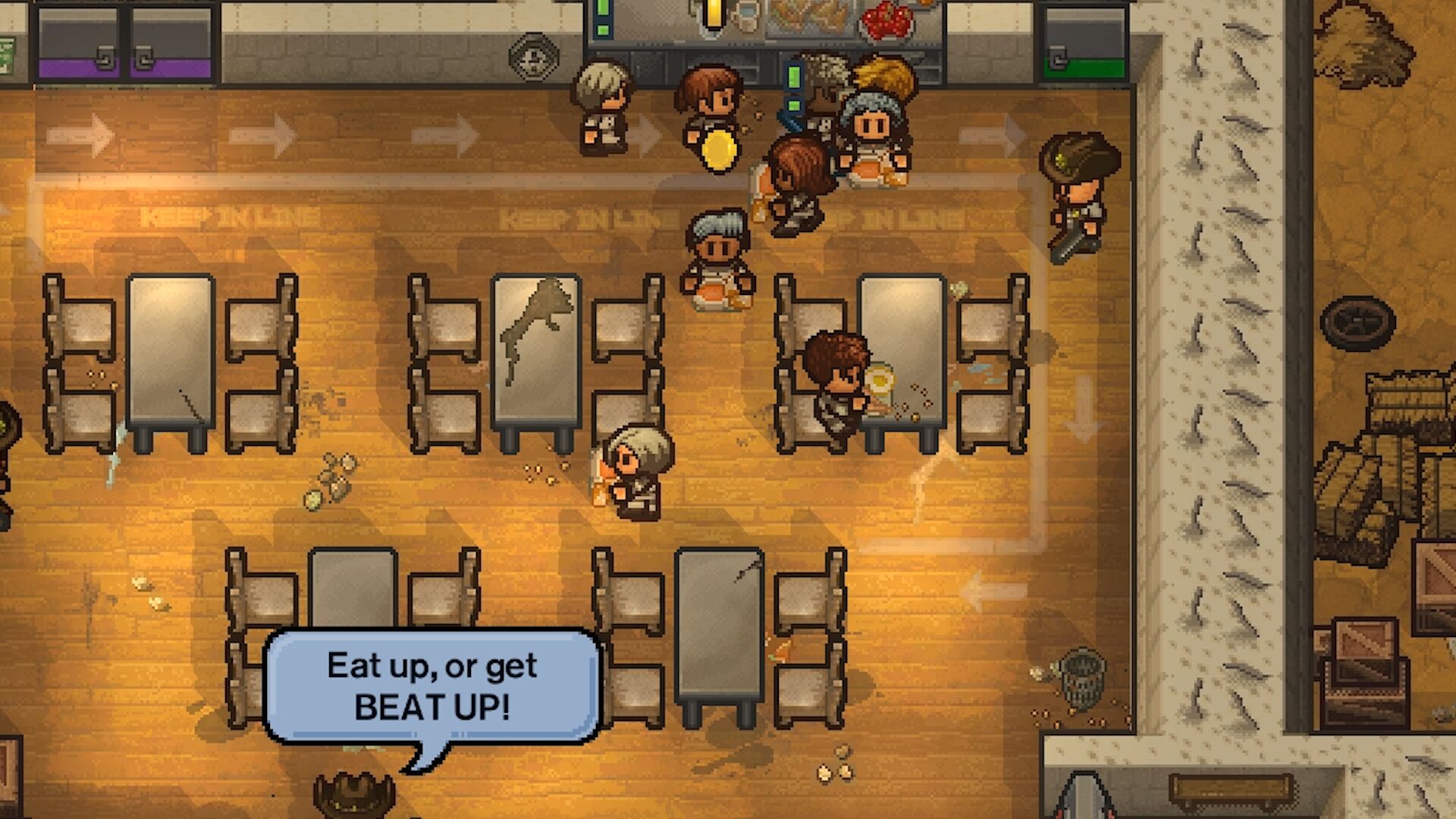 After that brief tutorial you are left on your own. The very next prison had me dropped onto a map much larger than the first, with even more prisoners and multiple opportunities to escape. For instance on the first playthrough, you walk around the prison with the warden who is giving you the nickel tour. You will see a film crew wandering about, so that’s an obvious escape plan. How you do that though is left for you to discover. Seems easy enough right? Well maybe.

After wandering around enough times I eventually discovered the library. I wanted to see what it was and, through a mini-game, I discovered that reading raises my intelligence. That’s great, but what is that used for? I didn’t know but as a stat driven person I wanted to raise intelligence to at least 50 (assuming that you max out at 100). Doing this opened up the film crew escape option. To cut to the chase, I needed my intelligence raised to craft an item that would allow me to use the film crew’s exit as my escape but the actual mechanics weren’t clear to me as the tutorial failed to cover the stat maxing opportunities you have.

Another escape possibility involes finding a way to tunnel out but to do that you need to increase your strength. Luckily, the gym provides weights to boost strength and aerobics to boost stamina and speed. Once again, I did not know how these mechanics fit into the game as there was no tutorial or guided intorduction to this concpet. Another seemingly important mechanic is the ability to generate "favours". You can take on certain tasks (think side quests) to clog someone’s toilet as a prank, or get someone out of a job so someone else can take that job. Your reward is money that can be used to buy various items that you can then combine (through a simple crafting menu) to aid in other favours, or in your escape directly. Again, the game doesn’t explain the system, it’s just there for you to discover. 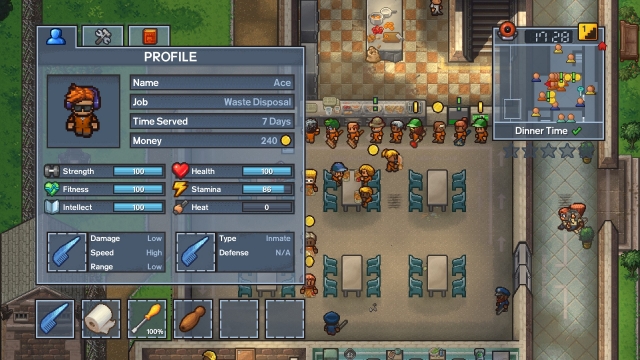 Despite the above rough opening hours, I enjoyed my time with the game. The puzzles and corresponding permutations for you to plan and execute your escape are almost infinite. You will definitely find a different approach to your escape than your friend, and that is the game’s greatest strength, the ability to craft your own story. To aid you with that story is the game’s multi-player mode. If you wish, you can set the game to allow your friends, and strangers, to drop into your game. This way you can work together to craft the ultimate prison break or you can betray your fellow escapees to help your own escape plan. Unfortunately, I did not have any of my Steam friends playing the game so did not get to experience this aspect of it. I did try a game or two with randoms, but found that my patience wore thin far too quickly. This is my own personal failing and not the game as I tend not to enjoy playing with random people.

Graphically the game is a colourful, isometric, retro-style game. The sprites are recognisable and easily distinguishable, and the maps are open. The colourful palette is an odd but neccessary choice. The reality of prison life would make this a dreary and depressing game, and the shades of grey would most likely not engage the player enough to keep them around. 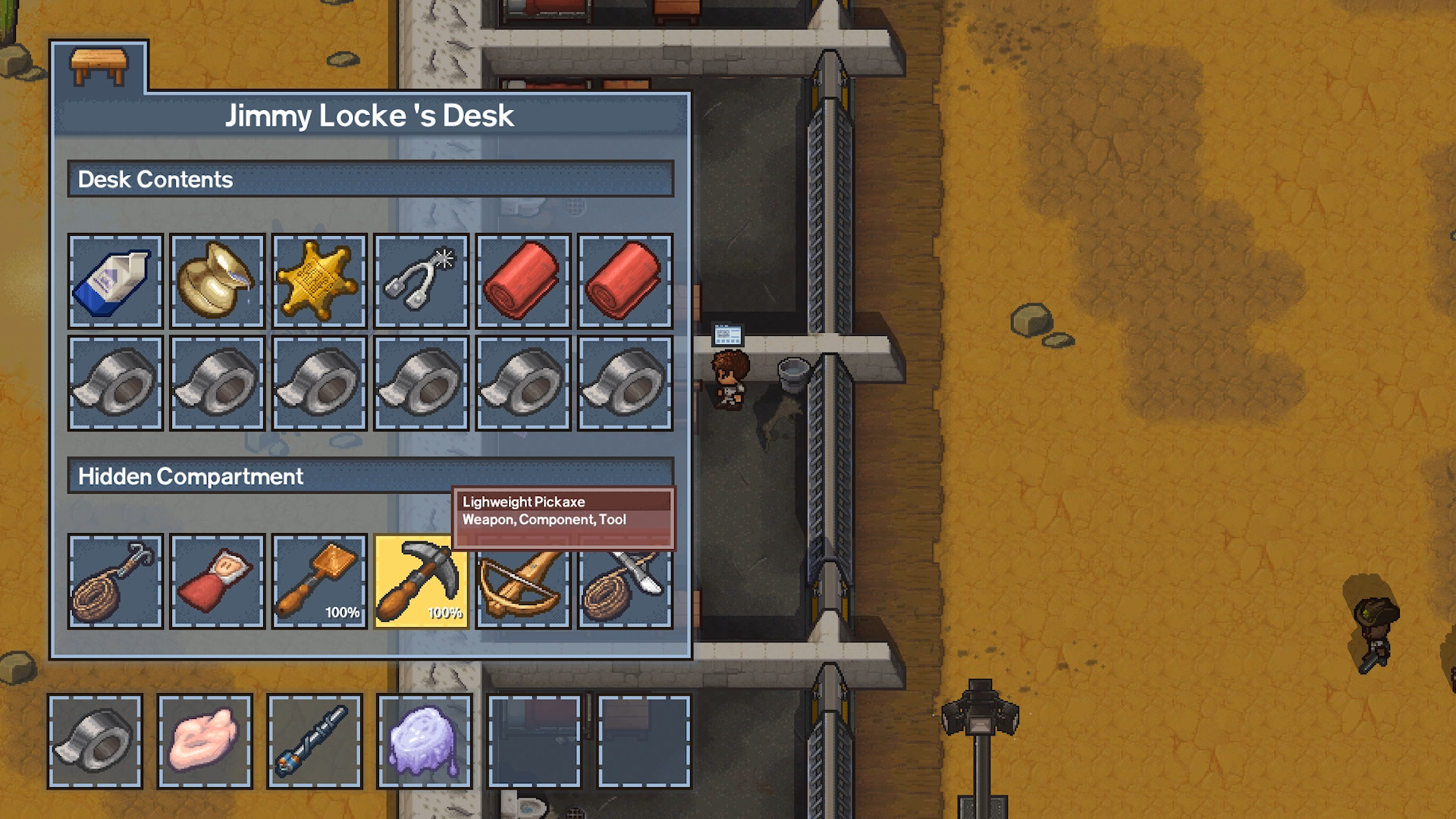 The game’s AI is impressive and the guards keep you on your toes as you attempt to make your way out of the prison. There are random cell inspections that could destroy your carefully planned escape as the guards find those tools you worked hard to find the parts for and craft. Guards can also be vicious, attacking prisoners when they see them and sending them to the infirmary. Your fellow inmates are not your friends either as they can also start fights or attack you directly. All in all, the common, yet more palatable aspects of prison life for a gaming audience are well coded into the game to make things more difficult.

The Escapists 2 is a fun puzzle game with a unique premise, and while the game could use a more detailed tutorial system, once you invest the time to learn the different systems you will be rewarded with a fun mental workout.

Mechanics are not adequately explained

Scottie
Loved the first one and enjoyed the Walking Dead spin off. 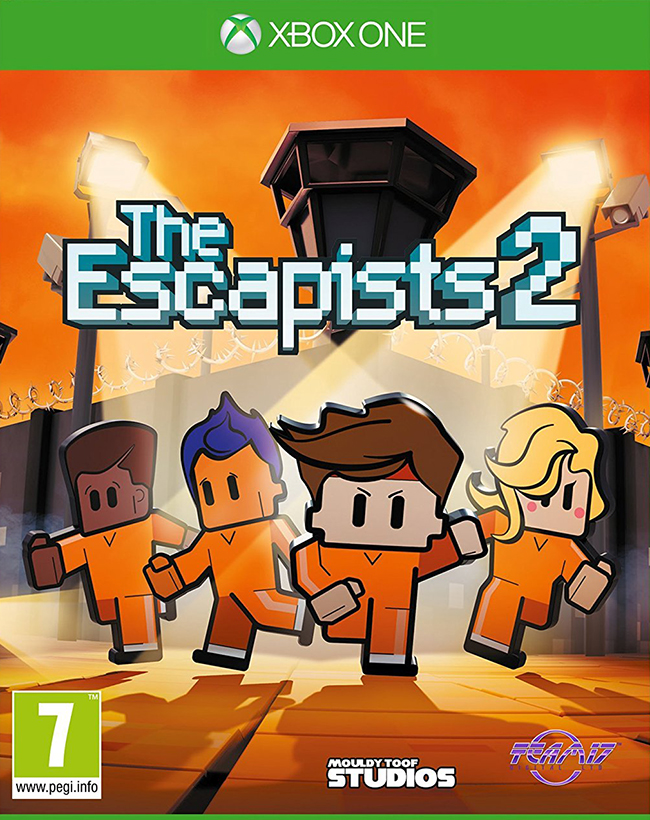