All the right angles. 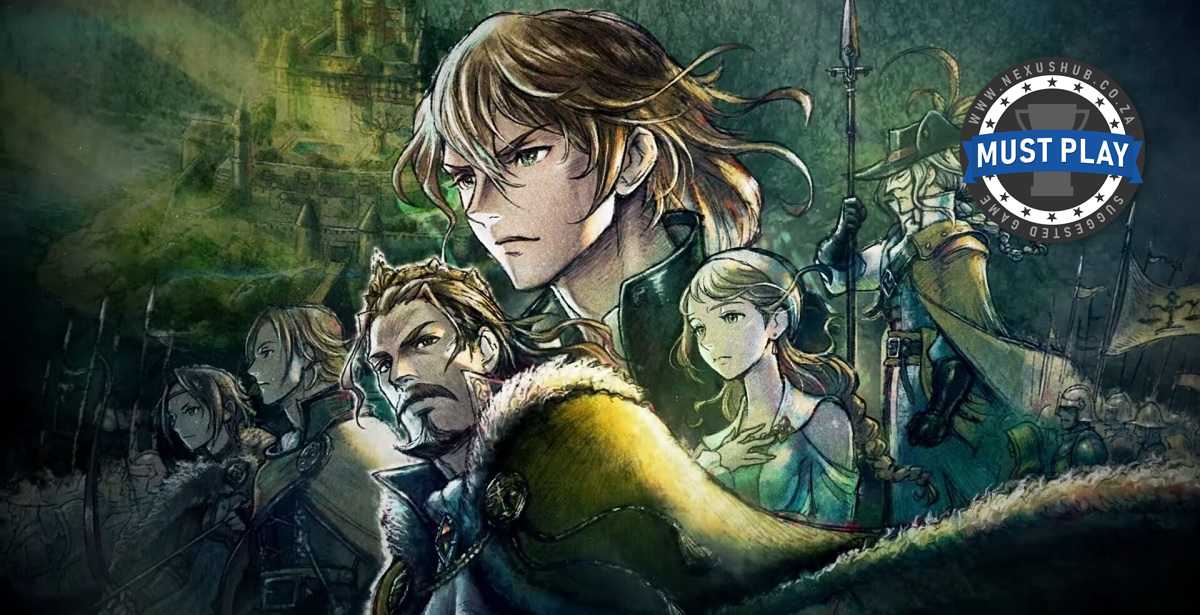 Let’s not kid - “Triangle Strategy” is not the most inventive name ever chosen for a game. It’s not particularly eye-catching, nor is it overly descriptive of what the game entails. Perhaps it is meant ironically, because the lack of detail in the name is certainly not reflective of what you’ll find in the actual game. The “ordinary” might start with the title screen, but the extraordinary is what follows.

Triangle Strategy’s story focuses on a continent called Norzelia and places you in the shoes of budding hero and newly established Lord of House Wolffort - Serenoa. Serenoa, you soon find out, is the quintessential charismatic leader and something that will serve him well as he finds himself in the middle of a political landscape that is ready to explode. To put it lightly, Norzelia is split into three main nations.

Aesfrost is on one end, a city built on its impressive Iron commodities and made up of fierce warriors. Hyzante is on the other side with a passion for knowledge, medicine and religion, while being funded through its Salt stores. Glenbrook hosts itself in the middle, and is the country where our hero hails from. While the three nations were previously at war over resources, there is a peace between them, however the tension is set from the start of the game. 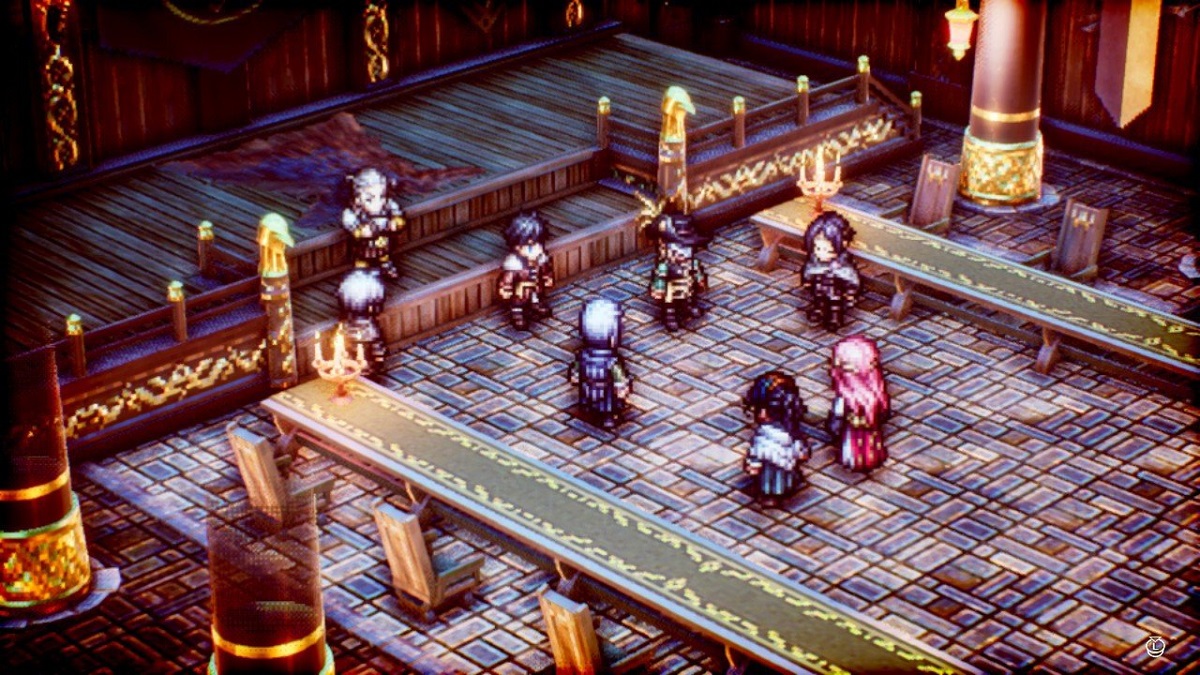 The small introduction above sets the platform for a much wider, more politically fueled story than you could possibly imagine, and something that stands out is just how excellently the writers tie up all the ends as you move through the different chapters of the game. Making it even more engaging is that your own decisions, as Serenoa, will directly impact the path that the story follows. Serenoa’s decisions are not easy - for one he is about to marry Frederica, a citizen of Aesfrost who has her own difficult past. He also has a band of allies to contend with, each with their own reasoning for why certain decisions should be made.

Something that stands out is just how excellently the writers tie up all the ends as you move through the different chapters of the game.

One of the game dynamics is based on Serenoa’s “convictions” which are affected by various conversations through sections of the game. Serenoa needs to use the information to make decisions in order to prevent full scale wars and political interference from ruining the peace on the continent. At certain points in the game, Serenoa will need to make a decision based on two options, but not without first hearing the suggestions of his group. In these instances, Serenoa will utilise the scales of conviction, where each person will vote on which decision they think is best. Serenoa, however, will have moments before the vote to try to persuade the others into doing what he believes is best. This decision making tool really does put a lot of weight on making what you think is the right call and adds value to the overall storyline and the way things unfold. 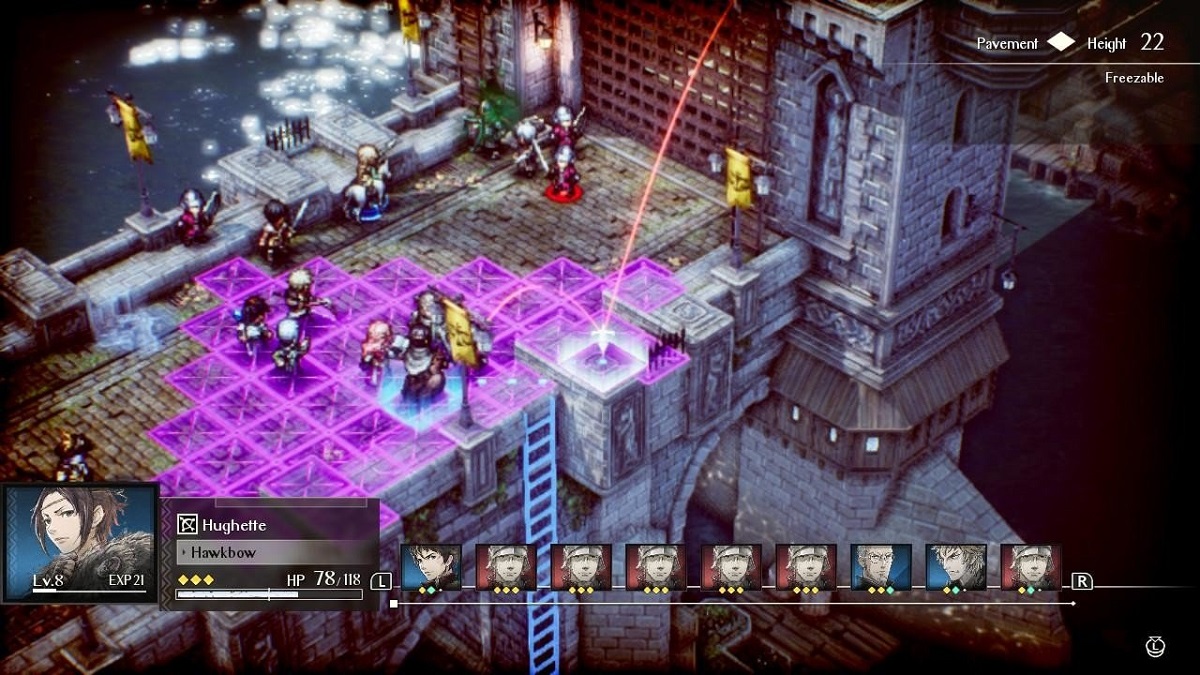 Through my (over 50 hour long) gameplay experience, I thoroughly enjoyed the overall setup of how the game unfolds. Essentially, the game is split into two different sections - story and battles. Each section is filed smartly into easily digestible chapters which makes the game feel a lot shorter than it actually is. The story sections can be drawn out a bit too much at times, but they do an excellent job of setting the scene before battles take place.

There is a lot of dialogue between the characters as well as small areas where exploration and extra conversations can occur, but in all they are well coordinated events that draw you into the story further and further, and add even more weight to the decision making process. I will say, however, that while the story is expertly fleshed out and contains twists and turns to intrigue all-comers, it did at times feel as though a lot of the characters didn’t quite develop as much as one would hope. I was left feeling a bit empty on some of the promises in that aspect. 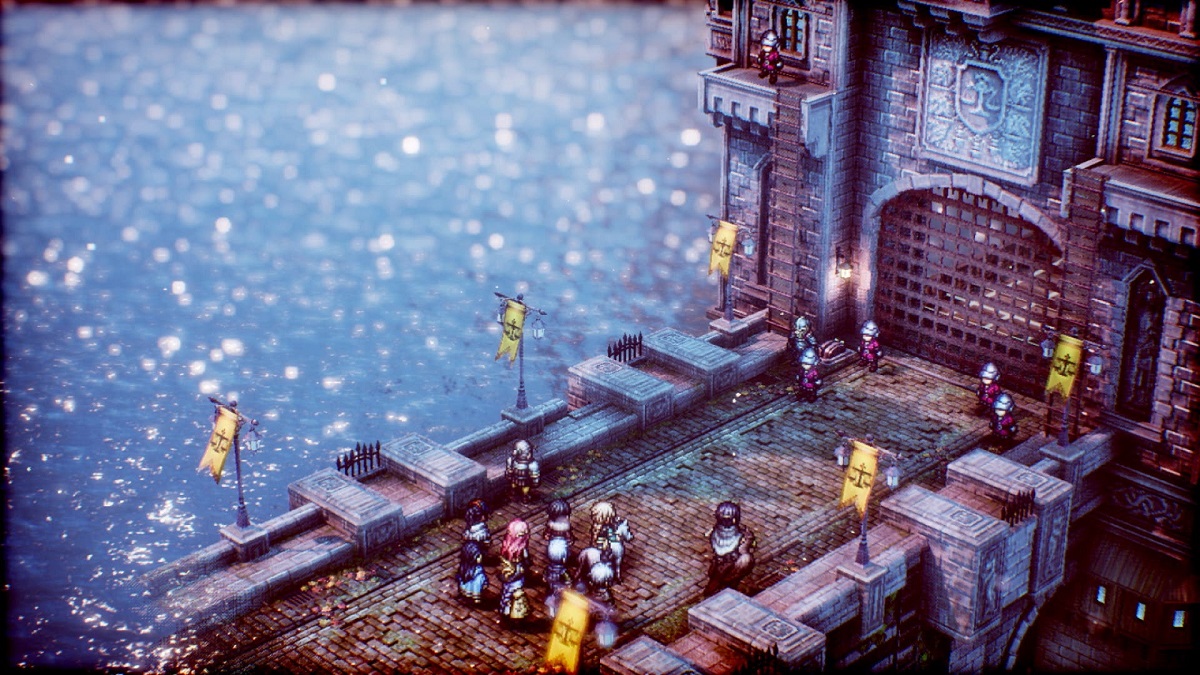 The battle sections take similarities from other tactic games, and most noticeable for me was the likeness to the Machine Strike game found in the recently reviewed Horizon: Forbidden West. The battles are located on a number of terrains in a board-game/chess-like fashion with your pieces (characters) spread out on one side, with the enemy on the other. Each character will have their strengths and weaknesses, as well as special abilities and a set number of blocks it can move on the board.

There is a lot of strategy required for the battle sections such as utilising higher areas to your advantage, or looking at enemy weaknesses to expose. Attacking from the back compared to the front will deal more damage, while multiple attacks can occur in one turn if the setup calls for it. Along with melee type attacks, characters will have various spells, projectile weapons and of course options to buff allies or weaken enemies.

Attacking from the back compared to the front will deal more damage, while multiple attacks can occur in one turn if the setup calls for it.

When I first started with Triangle Strategy, I truly believed I would become overwhelmed by all the explanations and tactics required for the battles, but the game does such a superb job of teaching you the mechanics that it was simply never a problem. Yes, you will need to experiment a bit, and some battles will prove much harder than others, but it’s all extremely accessible, even for newcomers to the genre. 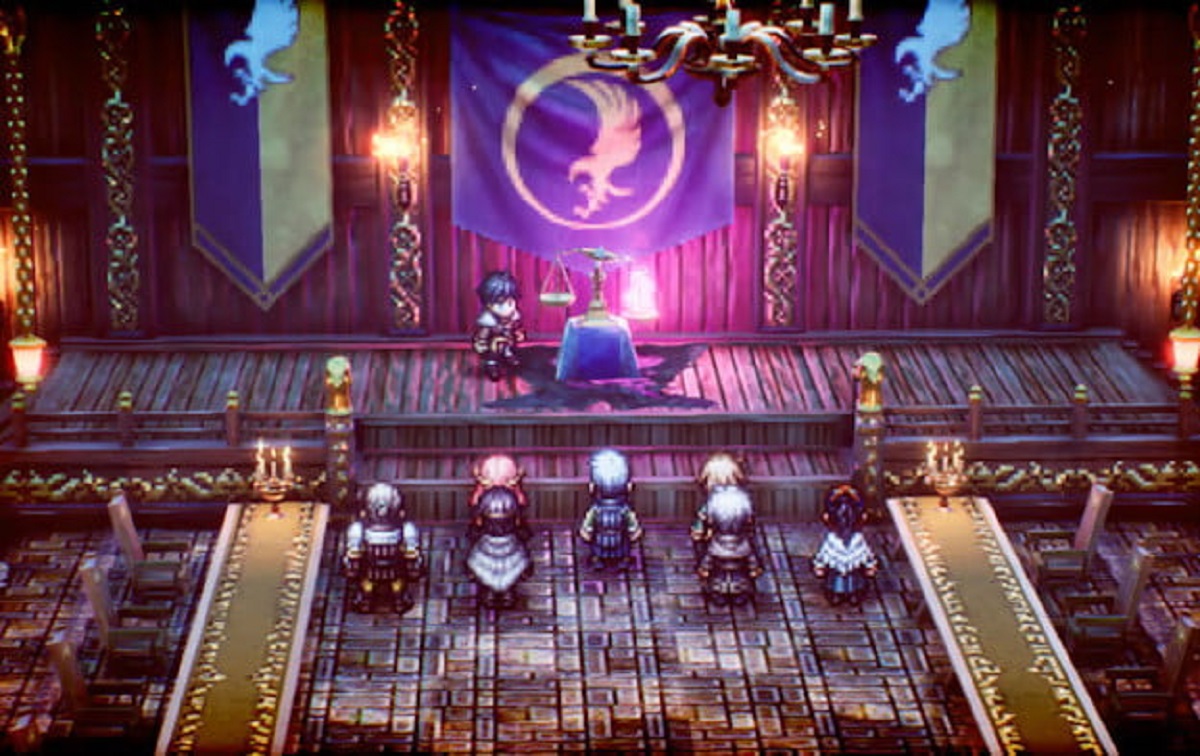 Triangle Strategy’s visuals are what you would expect from a 2D type of game of this nature, and as such do not form a large part of the review. Obviously if you are expecting high end visuals, you are coming to the wrong place. The audio, however, is another highlight throughout the game with impressive pieces playing in the background, especially during the battle scenes and while they are turn based, the music made it feel a lot more intense. The voice work is equally impressive for the scale of the game.

If you are a fan of tactics games and you are looking for something new and different in the genre, then Triangle Strategy is something you should not sleep on. It’s a meaty affair with a brilliantly told, political escapade which not only takes you along for the ride, but places you as a pivotal player in the overall outcome of its enigma. The battle and story sections are wonderfully compartmentalised into chapters that for the first time ever on a Switch game I didn’t feel as though my hands were going to fold in from those dreadful joy-con controllers. Triangle Strategy certainly won’t appeal to all, but for those looking for something engaging and entertaining it’s a must on the Nintendo Switch.

Not winning any graphics awards 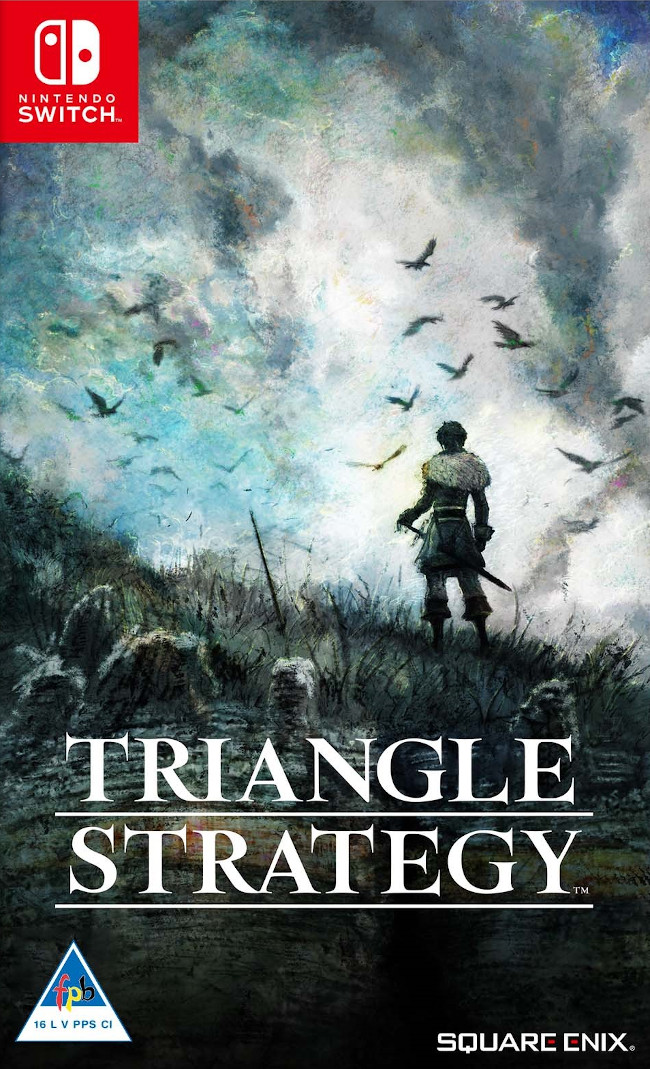