Island In The Sun 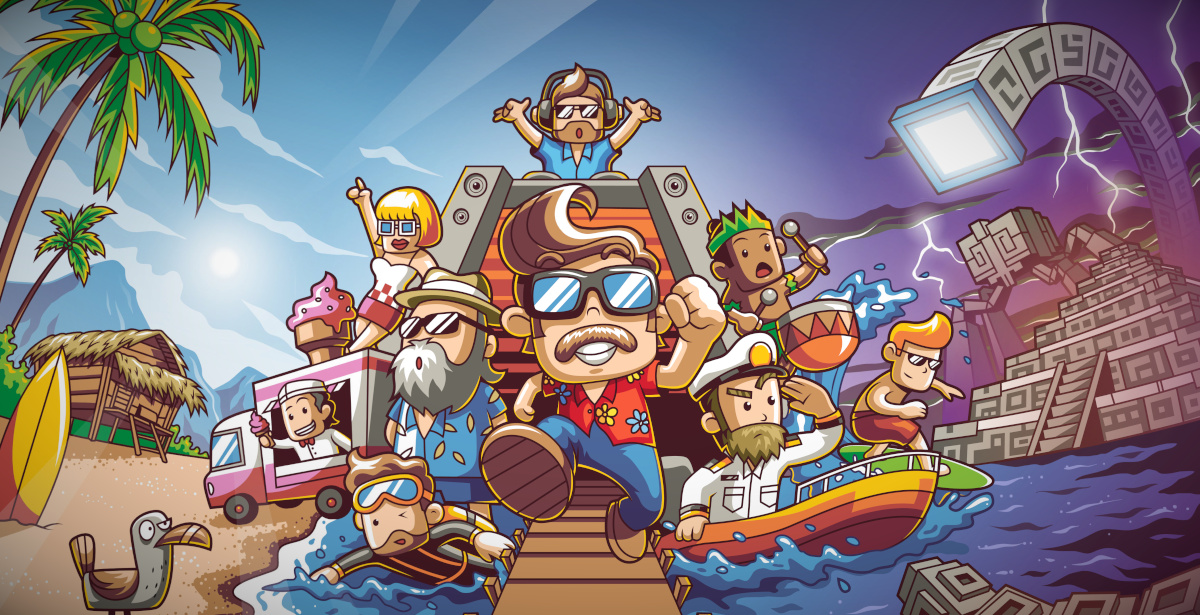 Developers Shin'en Multimedia wanted to create a game about experiencing weird things while holidaying in a strange place. The result was The Touryst, a breezy, isometric, adventure-puzzle game with a unique aesthetic, fun gameplay loop, and a ton of diverse mini-games to keep things fresh. It perfectly captures that feeling of being a tourist in a new place, dashing between historical attractions, while occasionally taking a break to enjoy some local activities as everyone else goes about their life. It's a game that you can pick up, play, and enjoy in 15 minutes bursts, or binge over several hours.

The The Touryst offers little in the way of direct narrative, except for one aged tourist who reveals the importance of the archipelago’s ancient monuments and provides hints as to your next objective. The protagonist himself is a portly, presumably middle-aged man, sporting chunky sunglasses, an awful moustache, and even worse floral t-shirt (though you can change that later). However, looks can be deceiving, and he’s more than up to any challenge on the island, be that navigating puzzle-filled ruins, spelunking in an abandoned mine, or taking to the waves on a surfboard. 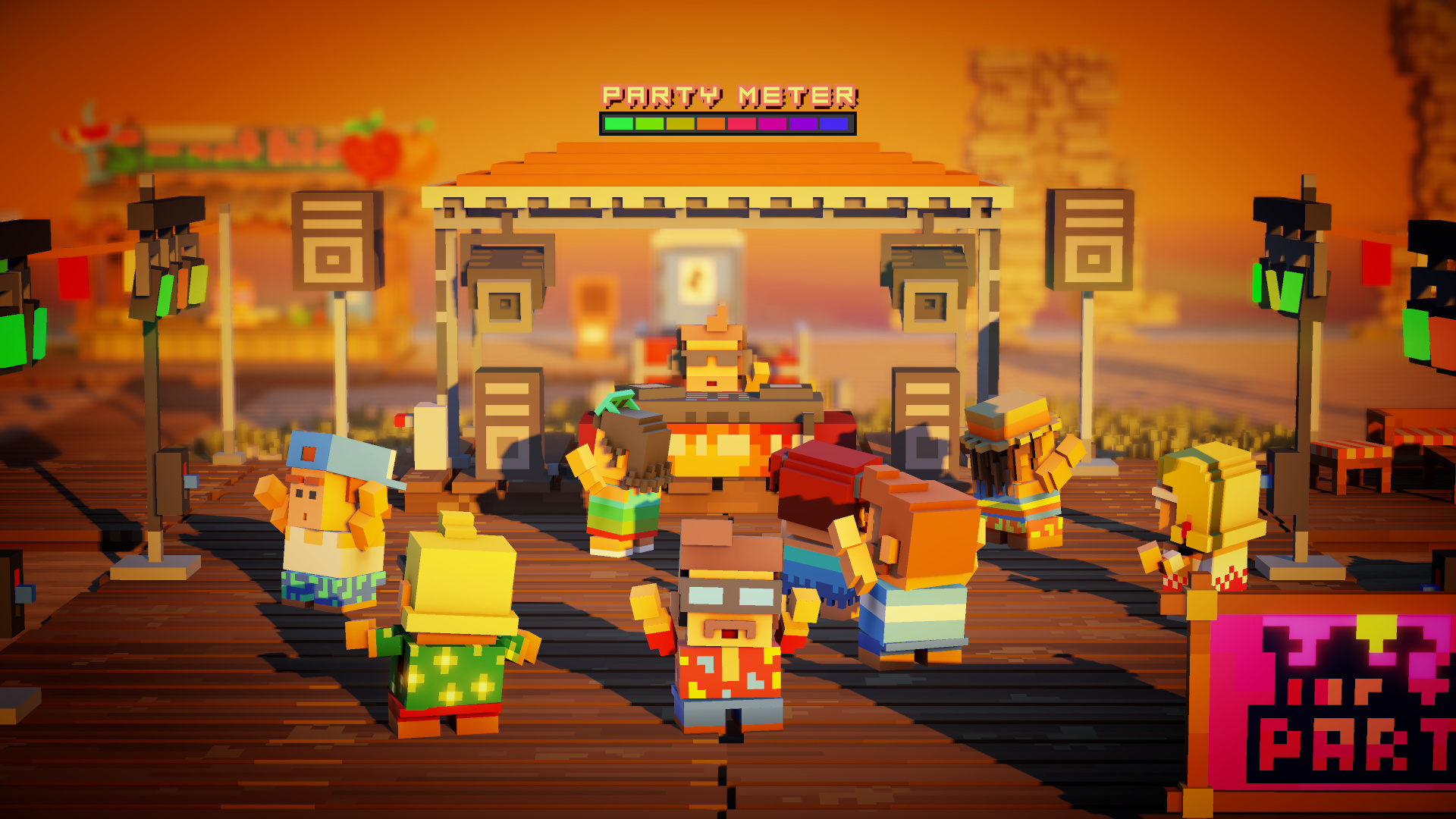 In addition to exploring the monuments and completing side-activities, the islands are full of trivial encounters to keep you in the mood.

When arriving on the first island with no obvious objectives, The Touryst can feel intimidating, leaving you to run around chatting to locals, collecting coins, and trying to figure out what is (and what isn’t) a puzzle. The controls are simple – moving, jumping, taking a photo, or interacting with objects is as complex as it gets. You’re soon given a multi-part objective and your first taste of dungeon-diving, light puzzling, the dexterity- and puzzle-based “boss” fights, and the ability to acquire new abilities.

After the guided opening half-hour, The Touryst opens up and gives you several new islands to pick from. However, progression still feels logical as it’s both easy to find the monuments you need to access, and you can sail back and forth between islands in an instant. Side activities and their associated mini-game become important at this point. You might need to complete some encounters with the locals to access a monument and earn a few coins to acquire a new travel guide (which unlock islands), a new ability book (thinking sprinting, double-jumping etc.), or a new outfit that’ll grant you access to new areas or specific activity. 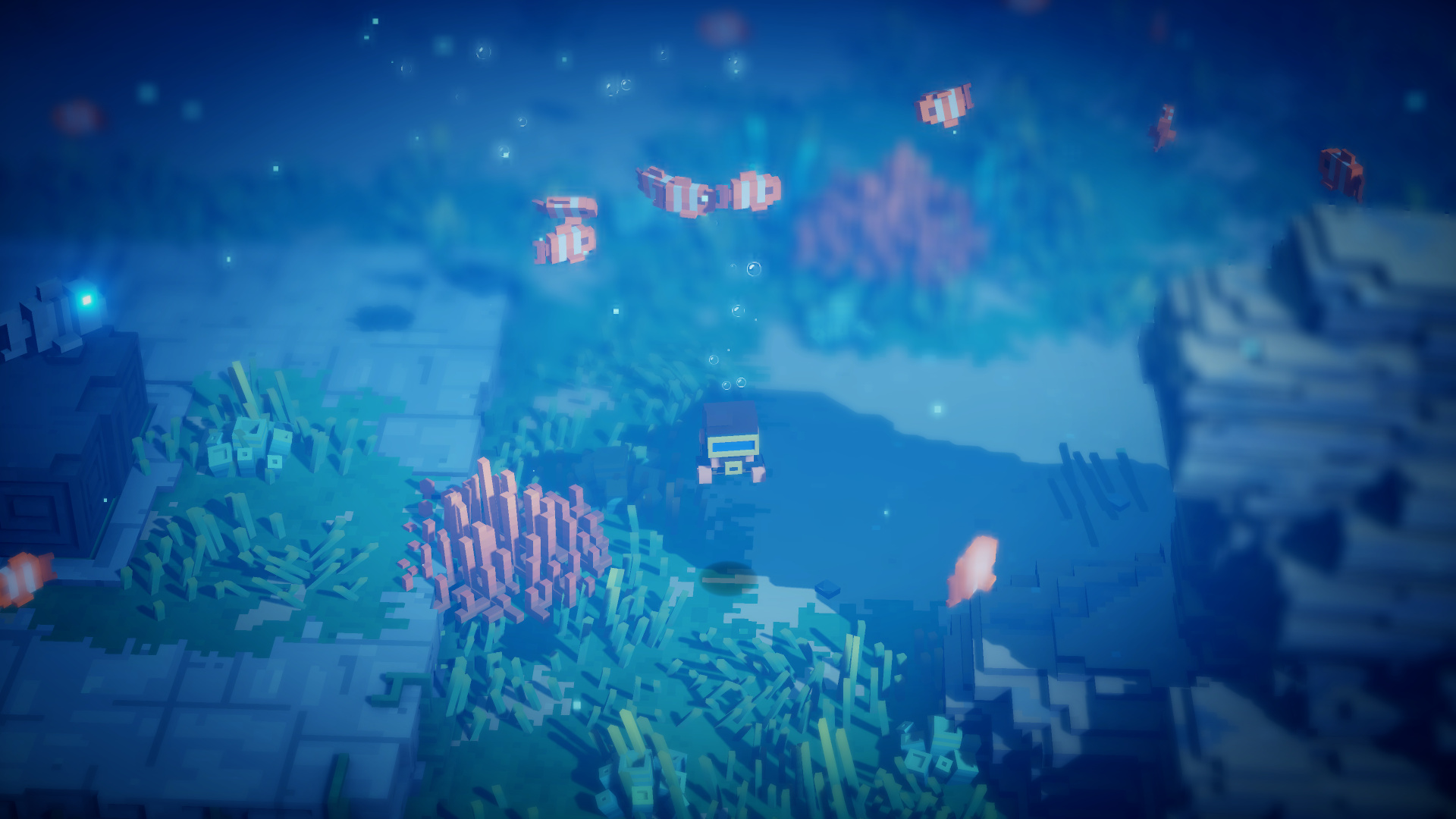 Are you for Scuba?

When exploring ancient monuments, pattern-recognition is crucial. Observing how different puzzle components interact, how platforms move simultaneously, or how an ancient sentinel attacks, is key to success. Thankfully, failure only places you back at the entrance of the current room, so despite a few tough encounters that required a trial-and-error approach, I was never stuck for long. Side activities in The Touryst are mandatory to a degree – you’ll need to complete about 70% to trigger the ending – but offer a complete change in pace and a myriad of gameplay styles.

These tasks can be as simple as photographing people and places; a relaxing scuba dive to find ancient underwater switches; purchasing new music tapes for a DJ; testing your speed and aim lining up penalty kicks; or mastering three NES-inspired videogame clones. As with the core gameplay, the controls for these mini-games are super-simple, but several are tough. That said, there’s enough variety spread across the archipelago that you won’t be locked out of the ending if you give up on a few. 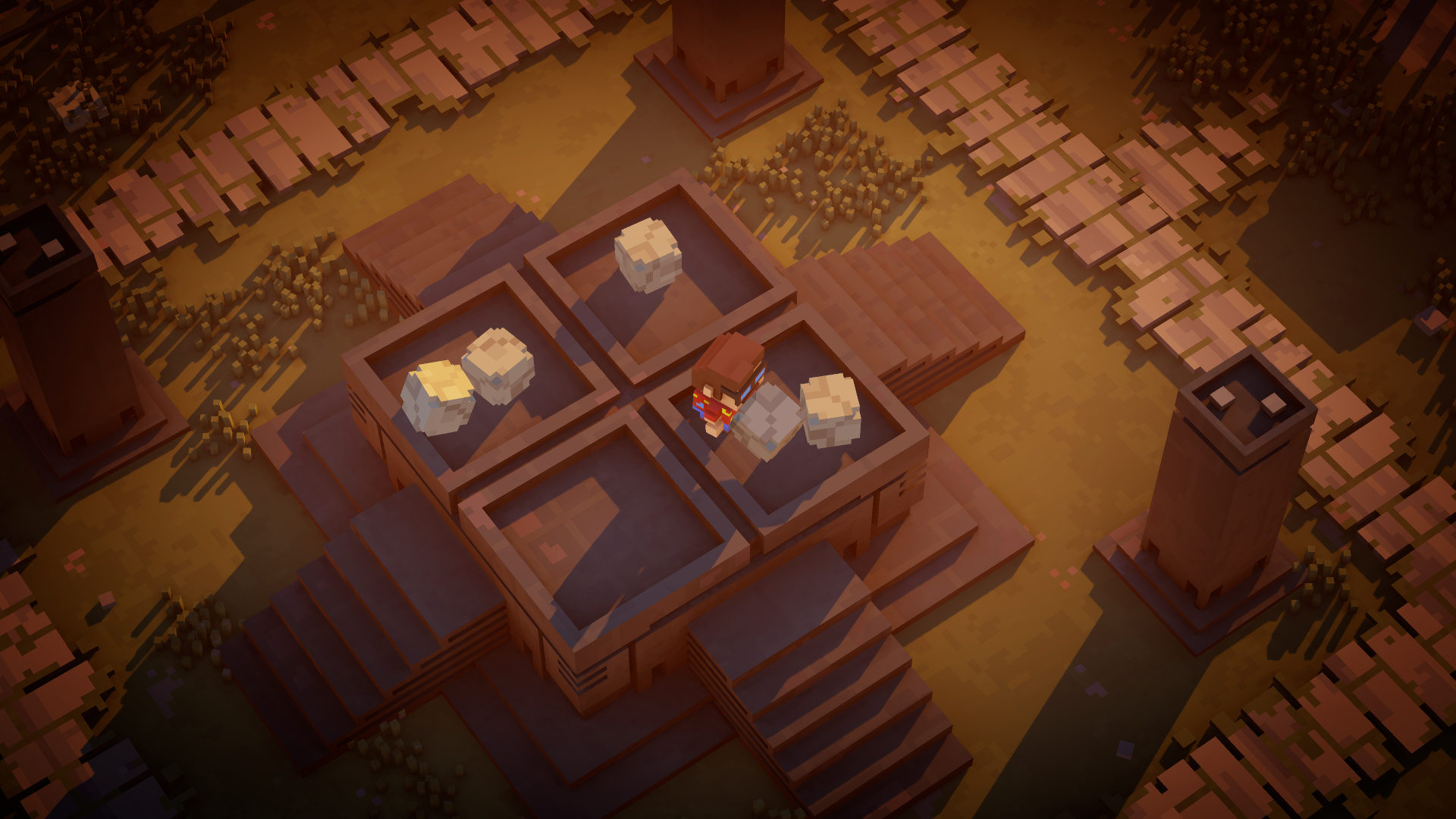 Puzzles vary in complexity and difficulty but most simply require you pay attention to your surroundings.

Despite accumulating a substantial list of secondary activities as you explore, you’ll want to keep moving forward as the solution to one puzzle is often found on another island. There’s also no shortage of hidden coins and collectible secrets for those who explore every corner (keep an eye out for floating bottles). If I have one complaint, it’s that you’ll likely find yourself running back and forth more than you’d care for in the final hour to wrap up these remaining activities. Thankfully, each island is small enough that it takes only a few seconds time to hop back in your boat and travel to the next one (the load times in The Touryst are already short on last-gen consoles and non-existent on the Series S|X).

A big part of The Touryst experience – both encouraging exploration and generating the atmosphere – is the presentation. Most of the islands are modelled after real-world places – think Hawaii, Fiji, Santorini, or Ibiza – and do a great job capturing the “feel” of those locations, thanks to the striking voxel-based world, lighting, visual effects, and music. The archipelago makes zero sense from a geographical, geological, or climatological perspective, but it makes for a visual treat as you move from sandy beaches at sunset, to rain-drenched cliffs, or to the harsh midday glare in a Greek-inspired town with distinctive white plaster buildings. The simple visual style also ensures it runs great on every platform. On the Xbox Series consoles, you'll get 4K60 on the Series S and 4K/120 on the Series X. 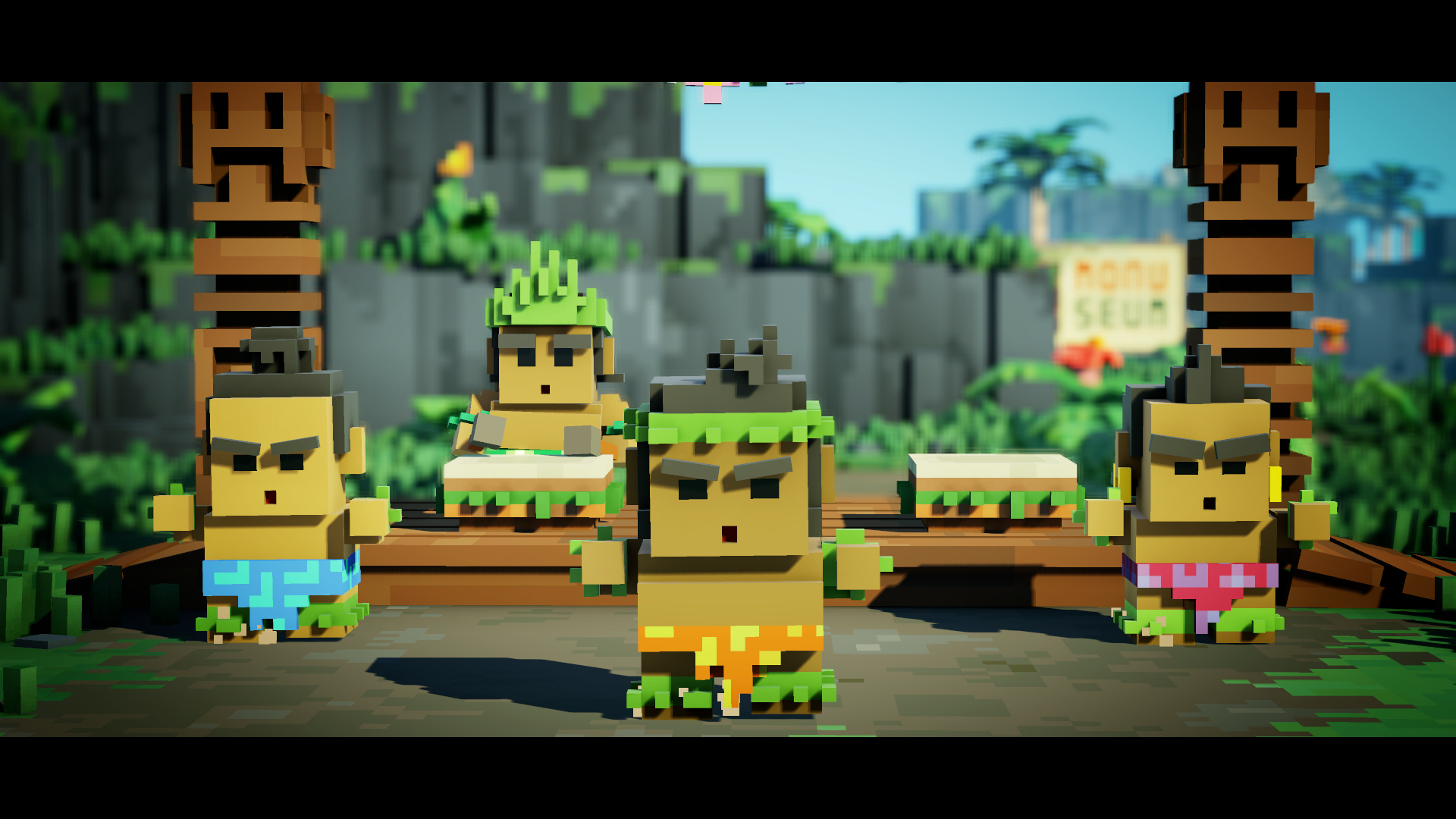 The locals are as diverse as the islands, most inspired by real cultural groups (including obnoxious Westerners).

Possibly my favourite thing about The Touryst is its length and how self-contained the experience is (though they tease a sequel I hope we get). I completed the story, every side activity, and even picked up all the achievements in just over six hours. It’s priced low, provides a simple yet diverse gameplay loop, looks phenominal, and doesn’t outstay its welcome.

If you’re looking for an excellent indie palate-cleanser that’ll provide a breather between the flurry of “AAA” games coming out at the end of this year, The Touryst comes strongly recommended. Even more so if you’ve already got an Xbox Game Pass sub and can access it today.
9