A quarter mile at a time. 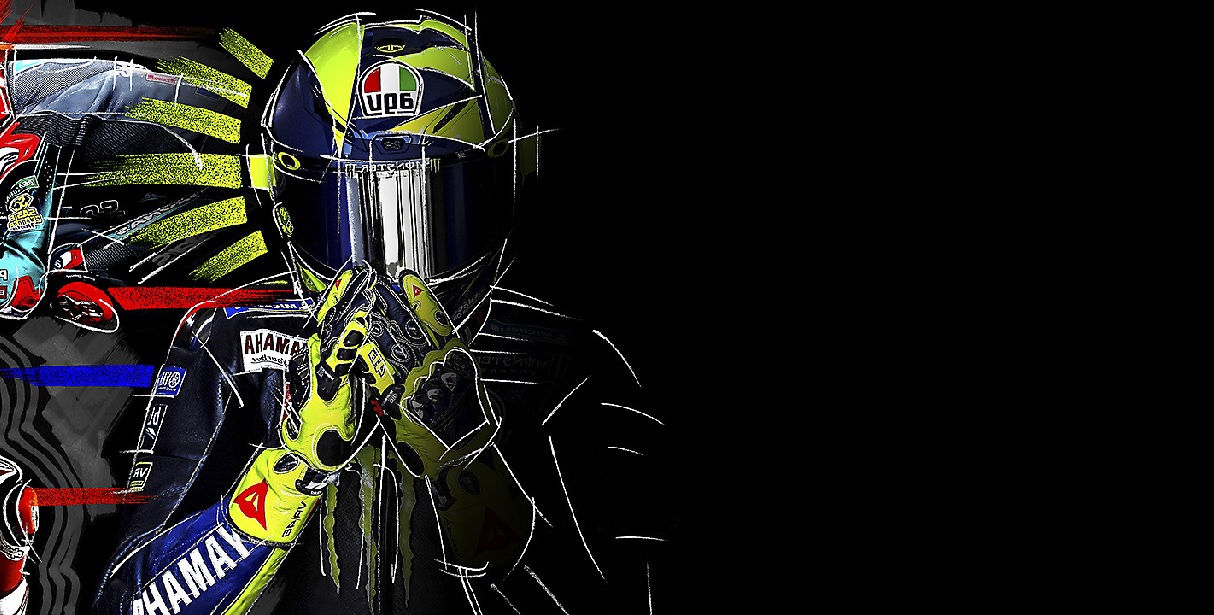 The MotoGP series has a history of triumphs and failures, with each new annual entry building on or removing pivotal features. MotoGP 20 fortunately goes back to the drawing board and doubles down on delivering more content and player agency. However, taken as a package, this latest installment is sure to please veterans of the franchise and offers something a bit more substantial and surprisingly innovative that we hope developer Milestone can use as a launching pad to build on future titles. 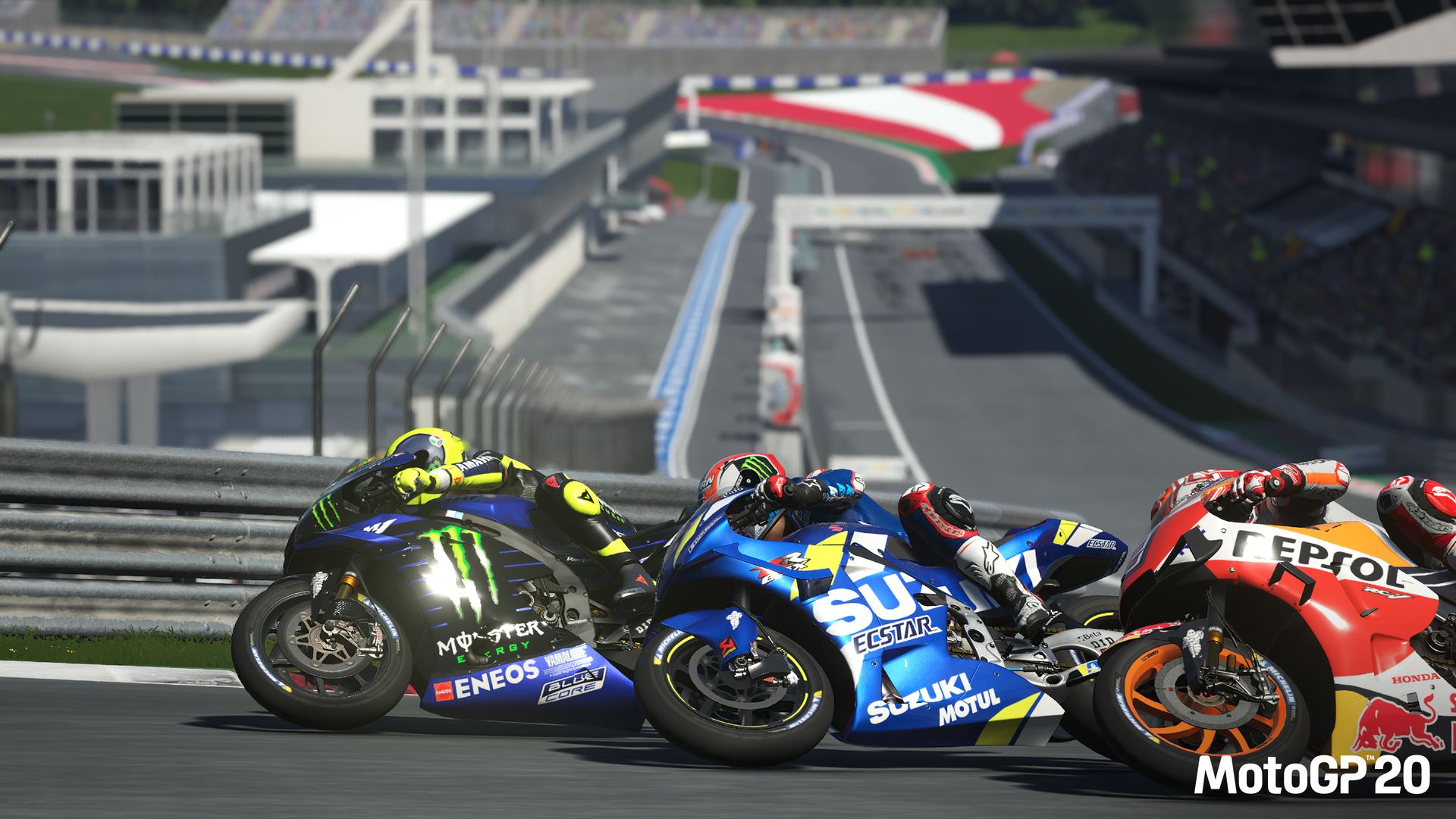 MotoGP 20 features a robust amount of customization, whether it be through enhancing the aesthetics and individual performance parts of your bike or even creating and branding your custom player. As soon as you boot up the newly overhauled Career Mode, you're immediately exposed to how in-depth and intuitive these systems will be. Managerial Career will have you select a personal manager to start off with, complete with technical staff that dictate how your bike performs depending on the hired skill sets (basically don't hire the Chief Engineer known for being an alcoholic and you'll be fine). As the game progresses, you unlock more options to pick and choose from, including more professional, seasoned team members.

Managerial Career will have you select a personal manager to start off with, complete with technical staff that dictate how your bike performs...

One of the best and most involving features of MotoGP 20 is how hands-on your personal managers actually are during your career run. More often than not, they'll make snappy decisions based on your performance to secure sponsorships and contract opportunities. You'll ultimately be battling off the track for these deals, though, and that's actually where MotoGP 20 felt at its most engaging and exciting. Of course, progression is only possible by winning various races, championships and seasonal events. Realistically, brands will look at your placement on podiums before they decide if they want to sign you on, and the same applies to contracts which can significantly boost your performance on track as it unlocks new bikes and parts. 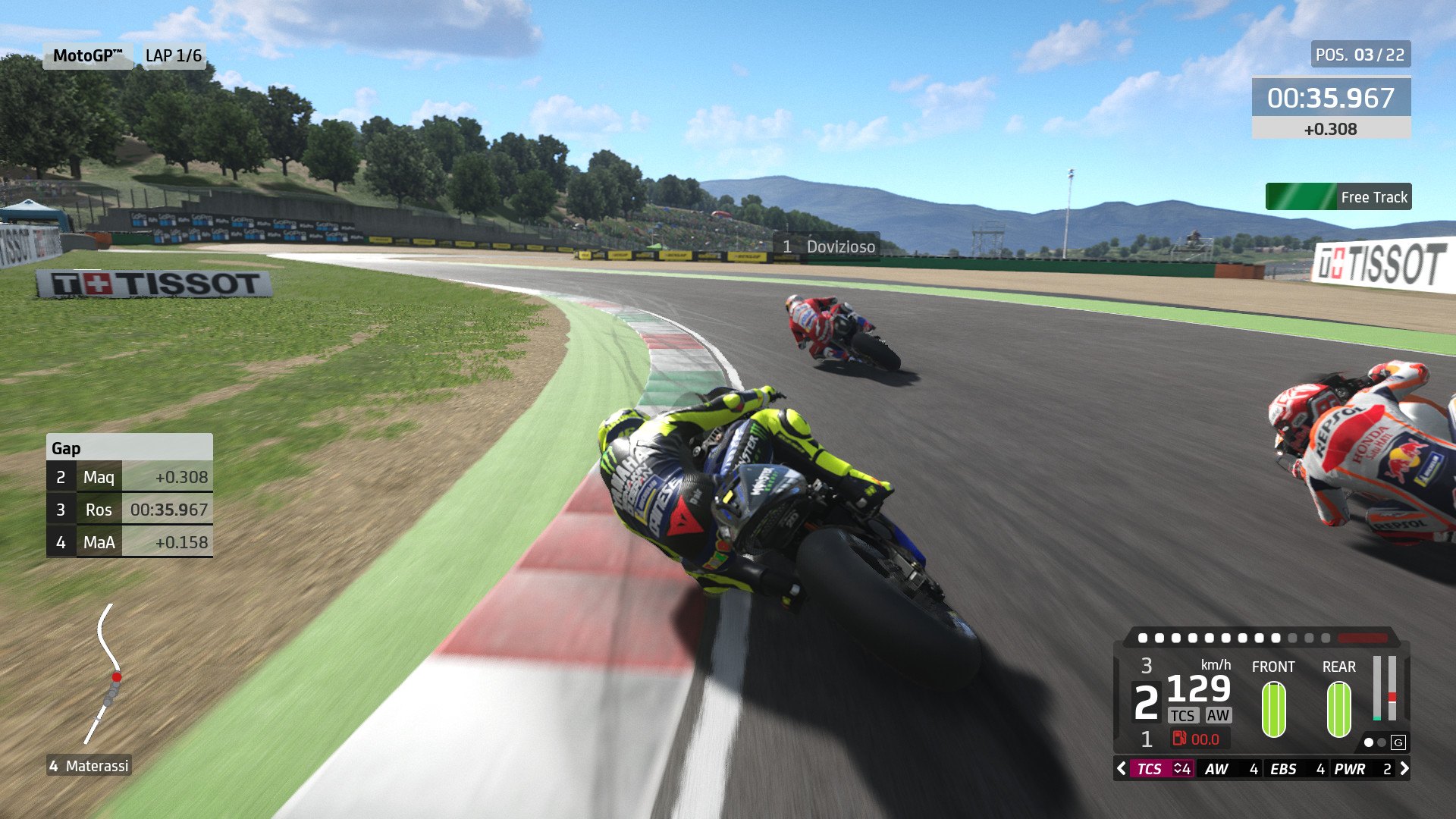 The management aspect of MotoGP 20 was something I was hesitant about, but once I got the hang of it, I fell in love with its intricacies. It's not the most technical managerial mechanics ever, but it does offer just enough freedom to make you feel like you're in complete control of your career - and that wins and losses are entirely on you. Managing your budget is only one part of this deep system, though, as evaluating sponsorships and contracts before making the leap is vital to your progression. Making the right calls affects which kind of performance parts you get, what kind of budget you can manage, and how you can evenly distribute these earnings to secure your team and negotiate better salaries. It's all remarkably well-realized, and feels like a step in the right direction for MotoGP's career modes, but the action really happens - and occasionally stumbles - on track. 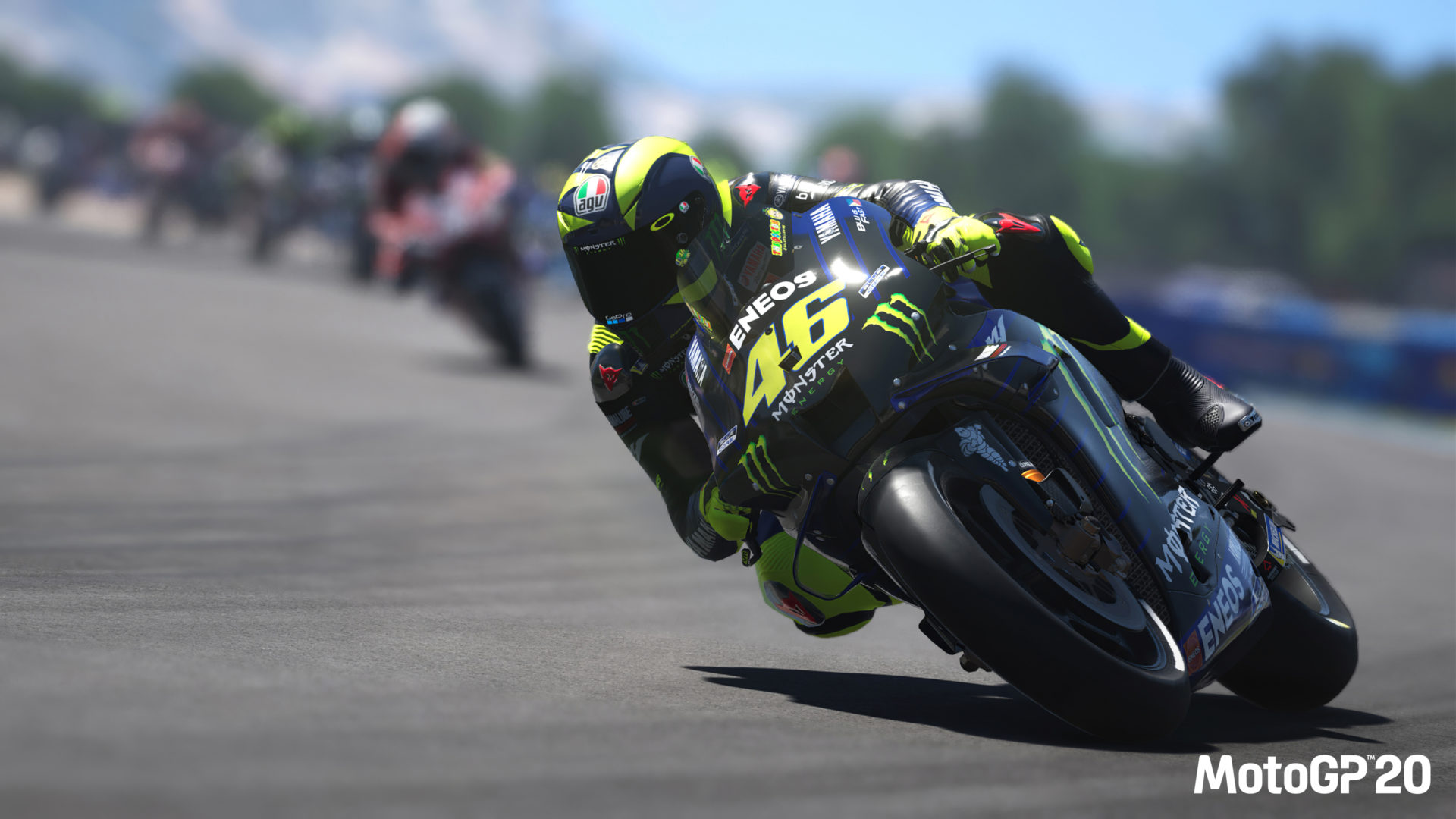 For the most part, MotoGP 20's gameplay feels good, though some hiccups really hold it back from feeling like the authentic simulator it aspires to be. Physics have strongly been taken into account this time, and like MotoGP 19, factors in a number of very realistic elements. Weight distribution is pivotal while leaning into corners, so you have to be mindful of your player's positioning and balancing. A lot of times, especially starting out, it's easy to completely misjudge a corner and send your player character tumbling into a fence if the weight distribution is off by a smidge. This is made all the more frustrating by the sometimes heavy controls. It took me a couple of good hours to really adjust to these weighty mechanics, but once I did, the game felt easy to pick up and difficult to put down once I perfected a track.

Outside of Career Mode, MotoGP 20 offers a few choices to increase its longevity. Quick Modes includes three options: Grand Prix, Championship, and Time Trial. Grand Prix offers multiple freeplays, qualifying rounds, warm-ups, and the inevitable Grand Prix to work your way up the podium. Time Trial is just as the classic mode suggests, which sees you running a track for the fastest time. This became my go-to mode as it offered a quick and easy race. Championship is a little more in-depth, taking players across numerous tracks around the world with a pre-selected rider - these selections typically included Rossi, Petrucci, Dovizioso, Marquez, and many more from the MotoGP scene. Riders also extend to Moto2, Moto3, and the Historical 4-Stroke MotoGP legends which can only be unlocked by exploring the Historical Mode Market. 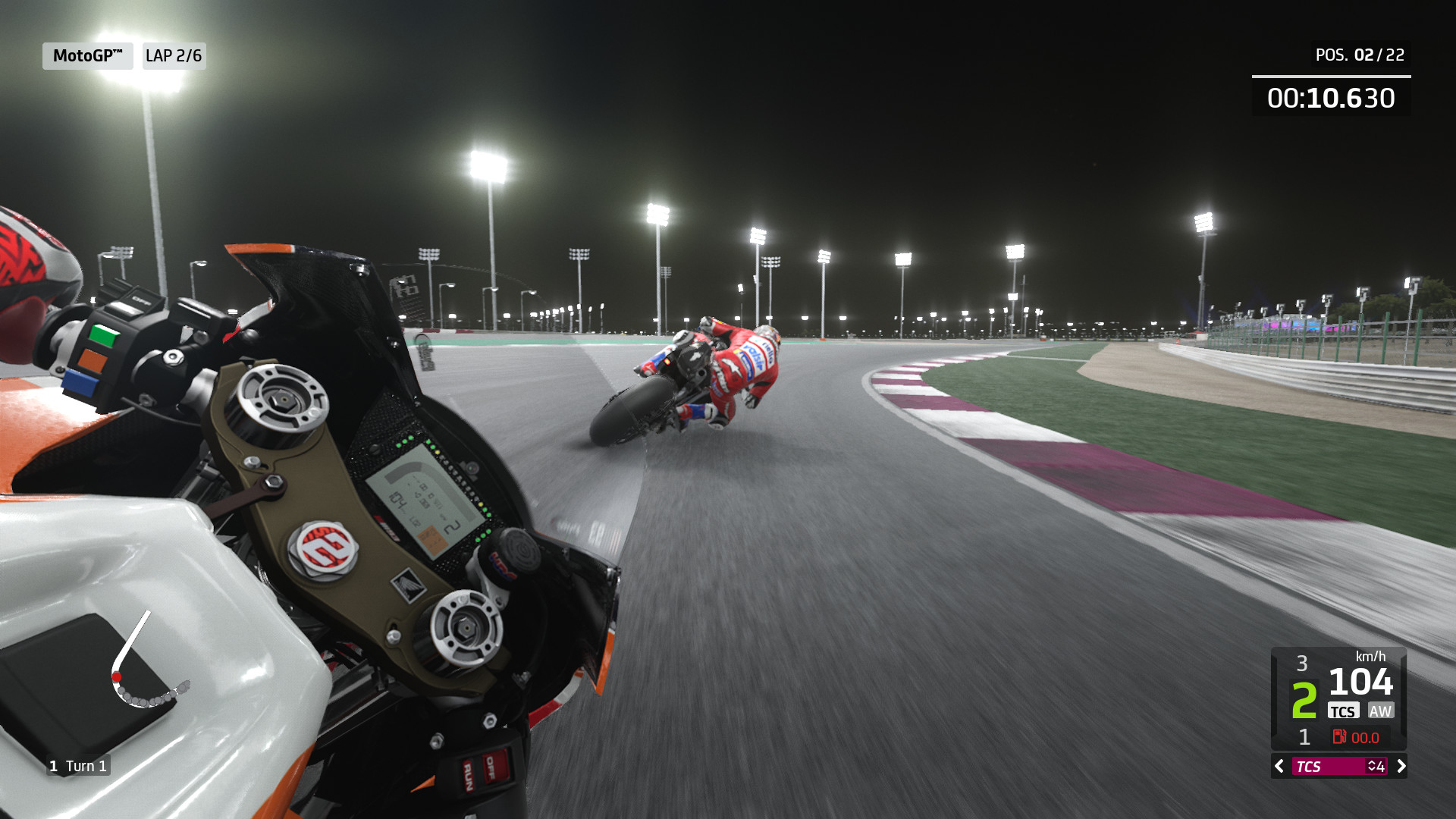 Speaking of, the Historic Mode is the game's equivalent of the live-service initiative. Every day, players get to compete in new challenges all ranging in difficulty. The higher the difficulty, the greater the reward as pole positions offer you currency to spend in the Historic Market. As previously mentioned, you can unlock new classic riders here, but also a number of customization options. It's fun for a while, and the lengths of these challenges offer a nice incentive to try harder for the top position, though it runs out of steam fairly quickly and the higher difficulties are punishing for the imperfect player.

...it's hard not to notice the road reforming its own textures in the middle of a race...

Visually, MotoGP 20 doesn't feel like the step forward for the series, but rather two steps back. It can often look as impressive as MotoGP 19, but suffers from numerous graphical hiccups and blemishes. On more than one occasion, textures on the road (and some in the background) failed to load, and shadows resorted to pixelated distractions. In the few cutscenes, character models can look awkward and seem almost early current-gen in their stoic facial animations. Thankfully, it does run at a somewhat consistent framerate on PS4, with only minor dips at higher speeds. However, it's hard not to notice the road reforming its own textures in the middle of a race, which did pull me out of the experience a few times. Where I can offer MotoGP 20 high praise is the fantastic sound design, which nailed the roaring engines, weather effects, and ambiance.

MotoGP 20 is yet another entertaining entry in the MotoGP franchise and a worthy attempt to take the series forward by Milestone. While a decent amount of options, deep and rewarding managerial systems, and customization is on display, there's surprisingly little incentive to do anything outside of the main career. On a technical level, great sound design can't really save it from feeling quite dated in the visual department. Frequent texture pop-ins and bugs pulled me out of the experience, and on one occasion, my game refused to even load beyond the splash screen. With refinements and patches, MotoGP 20 can mitigate these issues, but it seems only die-hard fans will find great value beyond that.

Weighty controls can work against you