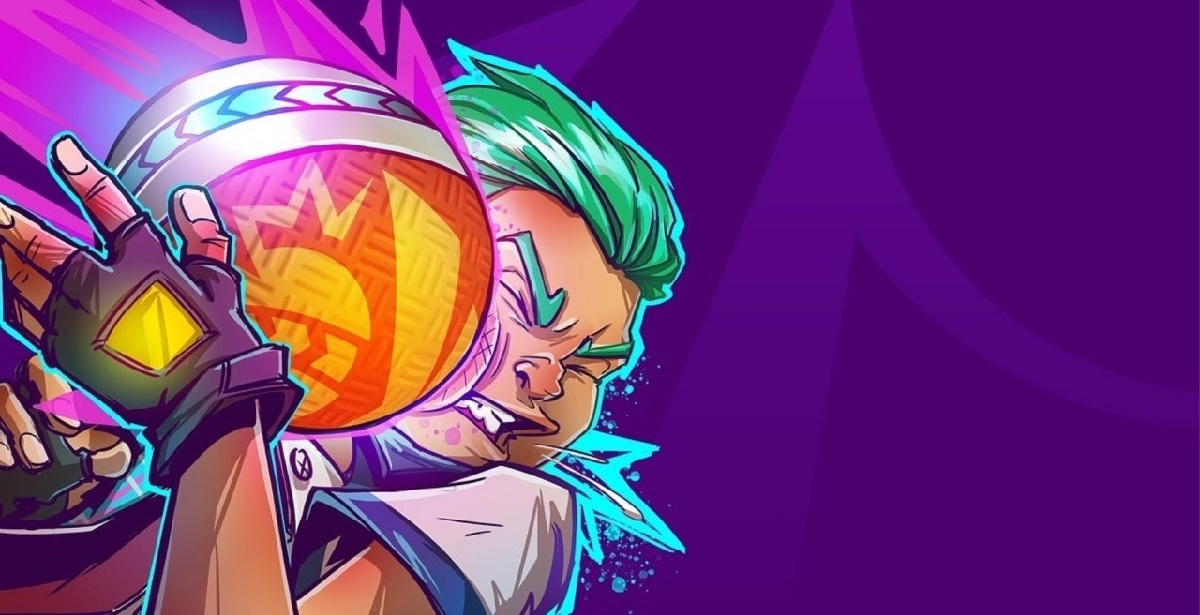 Dodgeball. It’s been featured in many TV shows and movies have been made about it. Now, it’s an incredibly addictive team-based PvP game in Knockout City from Velan Studios and Electronic Arts that is fun for dodge-brawlers of all ages.

This isn’t dodgeball like you know it, however. This is adrenaline-fueled chaos that happens to resemble the game of dodgeball. When I started playing Knockout City, I looked at the characters and the level design and imagined that it would be a cute game for kids to play, but I was very wrong. Not only do you need strategy and teamwork to win, Knockout City fanned the flames of my competitive nature and turned me into a Dodge-brawling fiend. 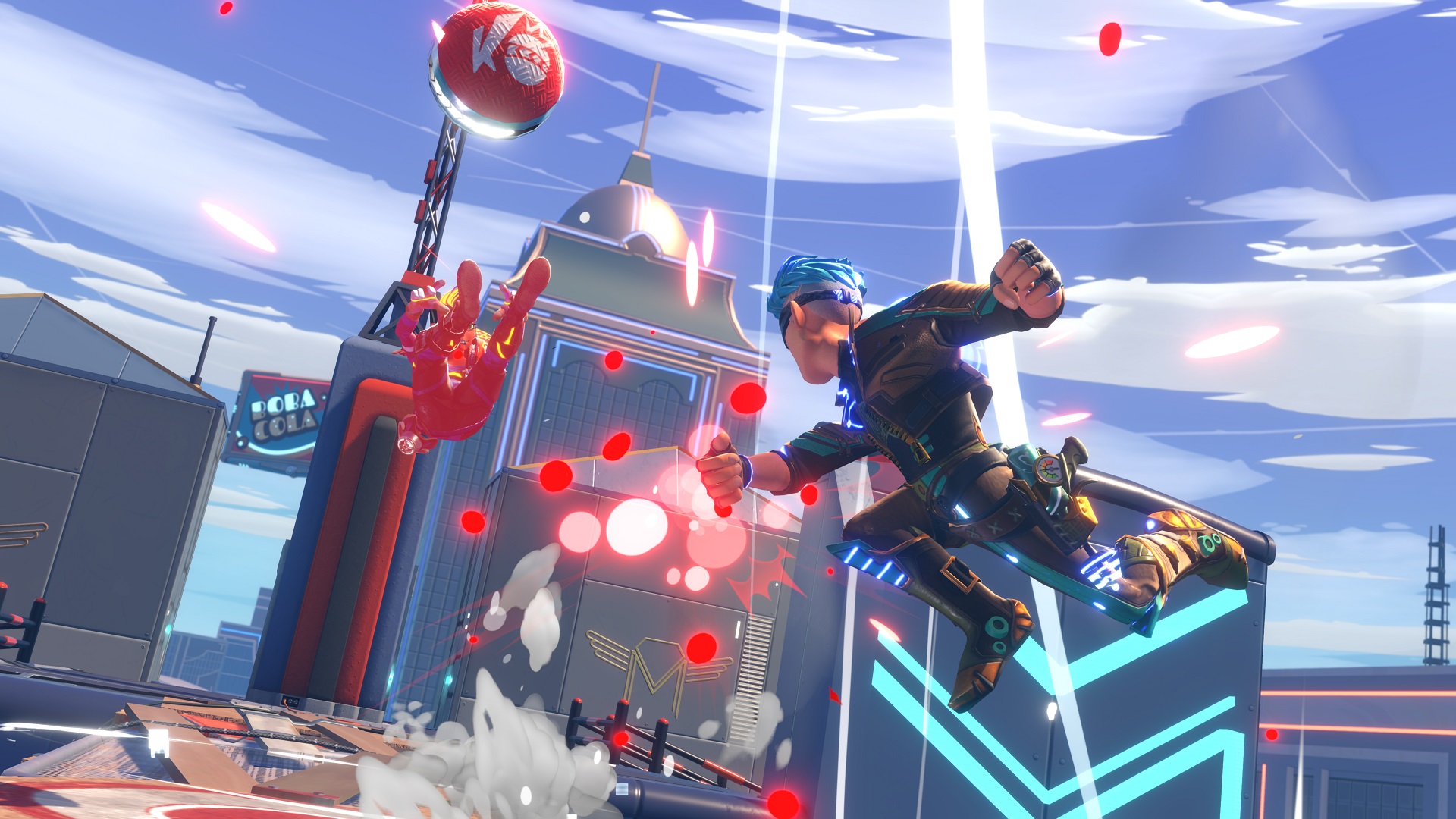 I suggest that every player starts with the tutorial. It’s a fun little introduction to the game using bots to show players how to play the game to get the most out of the different tricks and balls. Knockout City isn’t as easy to dominate as it sounds - there are many dynamics that make a difference in the game and can make or break a match. From using your teammates in “ballform” as atomic balls to charging balls by passing them to your friends, you’ll find a lot more enjoyment in the game if you play with a squad and you understand the teamwork strategies in the game. You can also form a “crew” or join an existing one and find people to play with if you don’t have friends who play the game on the regular.

Knockout City isn’t as easy to dominate as it sounds - there are many dynamics that make a difference in the game and can make or break a match.

The Hideout is a fun addition to the start game, giving the player an interactive “lobby” type environment where they can perfect the different trick shots and practice using the different ultimate balls while they wait for the matchmaker. There’s even a bot to help players get the timing right for catching incoming balls. It’s not meant to be a place where players spend too much time, but there is a lot that the developers can do to customize the Hideout even more, like being able to unlock posters and décor in-game to really give your Hideout a personalized feel. 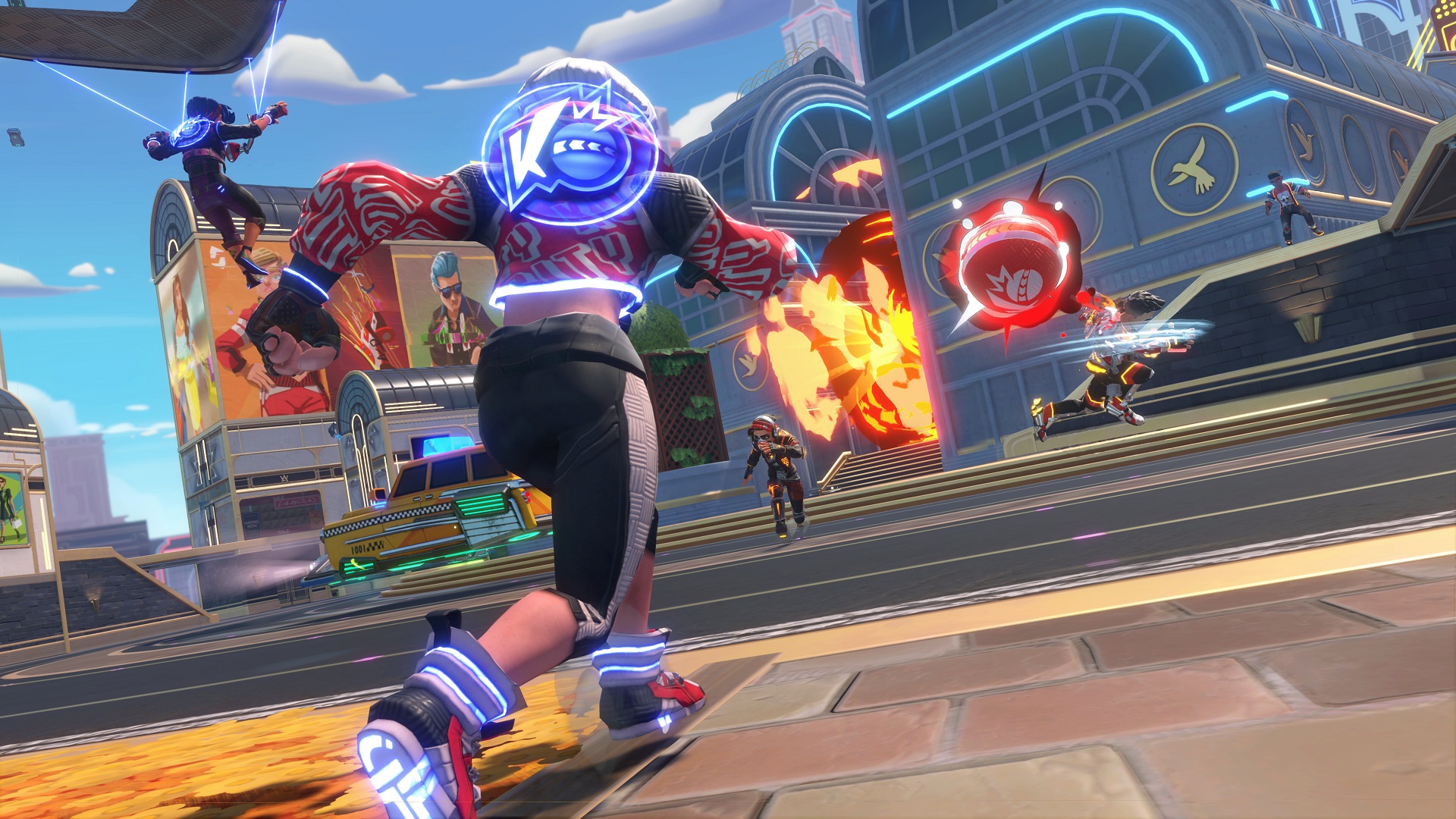 Map designs are simple and fun, with moving parts that change the landscapes and the way you can jump and dodge your way away from incoming balls. The colours are vibrant and bold, and the feeling you get from the environment is a real retro trip - complete with the silky smooth announcer voice which I am just waiting to break out into some jazz number.

Memorizing the spawn locations of the balls will help you navigate the maps and always ensure you’re one step ahead of the competition. Whether you are playing the strategic game and running as a squad or playing as the resident Leeroy Jenkins, you need to know where to pick up your next ball to ensure you don’t get caught facing a firing squad of other players - unless you’ve gotten really good at catching balls thrown at you and hurling them back at the opposition for a KO!

The colours are vibrant and bold, and the feeling you get from the environment is a real retro trip

The character designs are cute and quirky with skins available as grind items or purchased through Style Points. The developers have done a great job on the customization of avatar faces and hair with a bunch of different options you don’t usually see in a game like this. Hopefully in newer seasons of the game, players will see more customization options for outfits come through, like being able to pick certain elements from skins and combine them. For now, players can only choose a full outfit with a small number of colour variations. 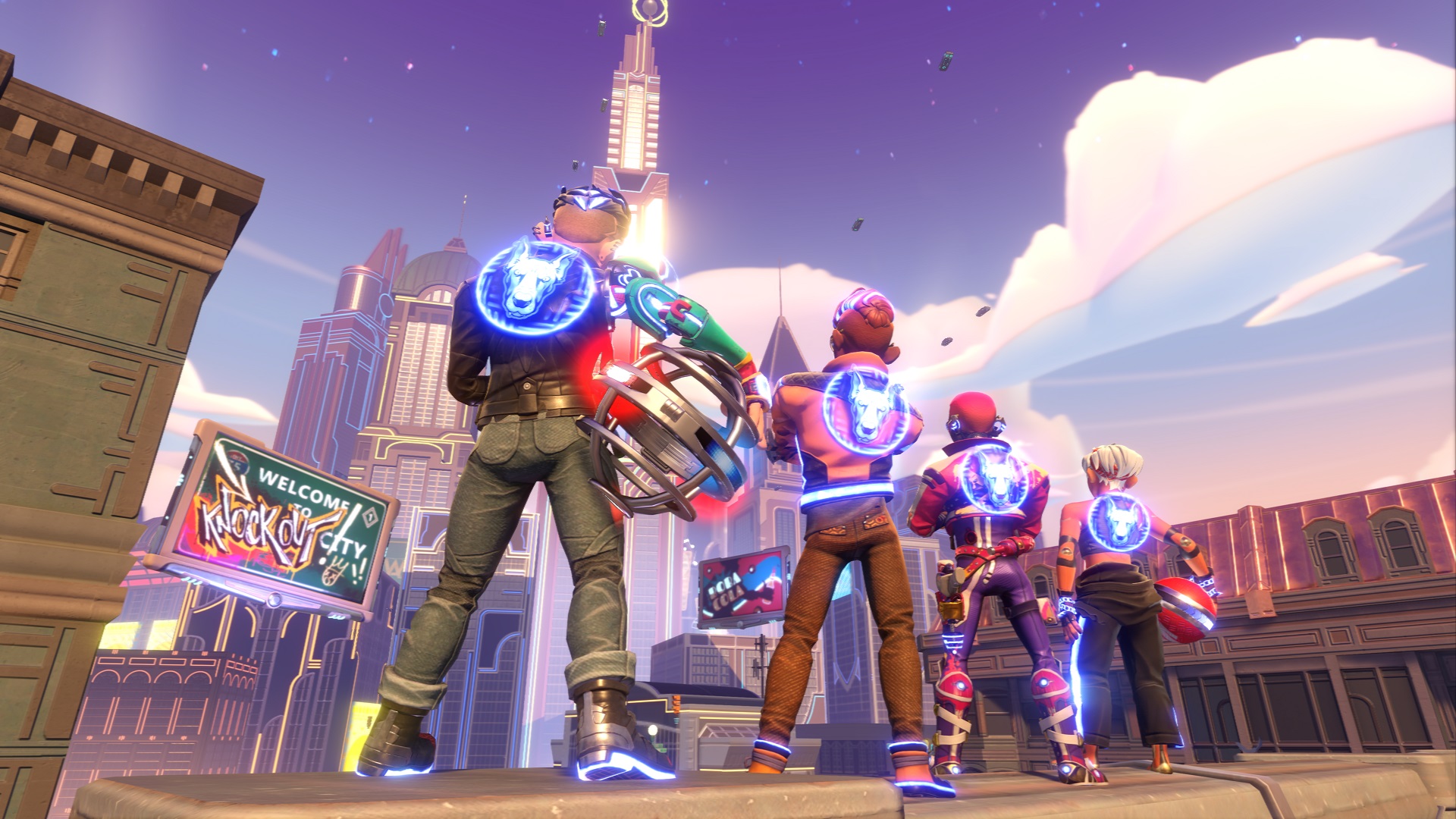 My biggest and probably only issue with the game is the long matchmaking times. It’s incredibly difficult at times to find servers to play on and most of the time you will end up playing the same opponents over and over again in consecutive matches, especially when you are playing solo.

Ranked servers are now active for more competitive players. Unfortunately, the wait time on these servers seems to be even longer. Hopefully this will fix itself as players become more confident in their ability to dodge, drop and knockout opponents and want to prove their skill against other competitive players. 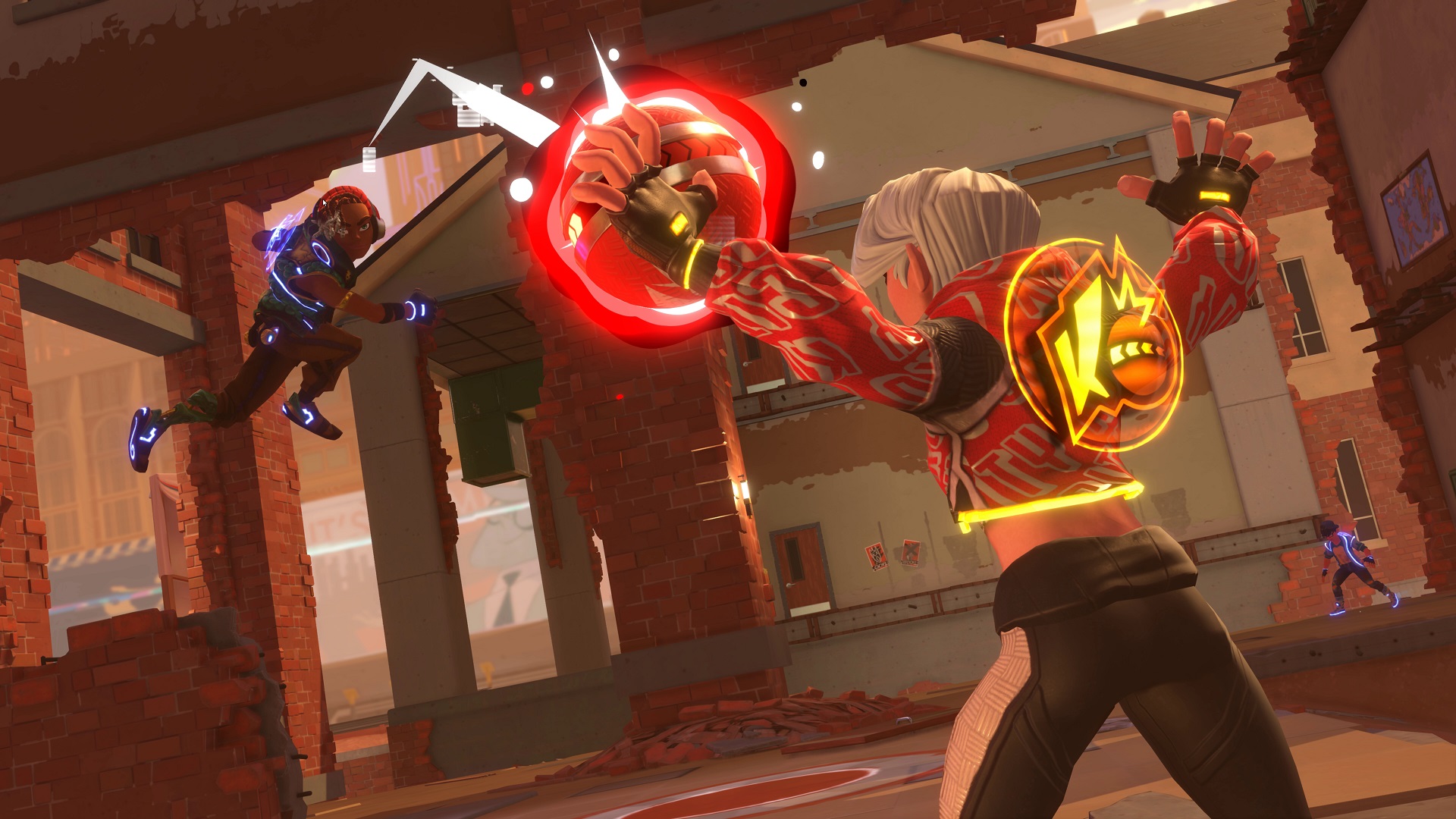 Knockout City is a fun, wholesome game with a lot of potential in upcoming seasons. Server queues aside, I have a lot of fun with it and highly recommend that you give it a try. It’s a breath of fresh air, so get your squad together and fling some dodgeballs at each other for a good laugh.

Maps are fun and creative

jacosauer
Nice one Seeker..... I am not a big "Sports" game fan but this looks interesting.