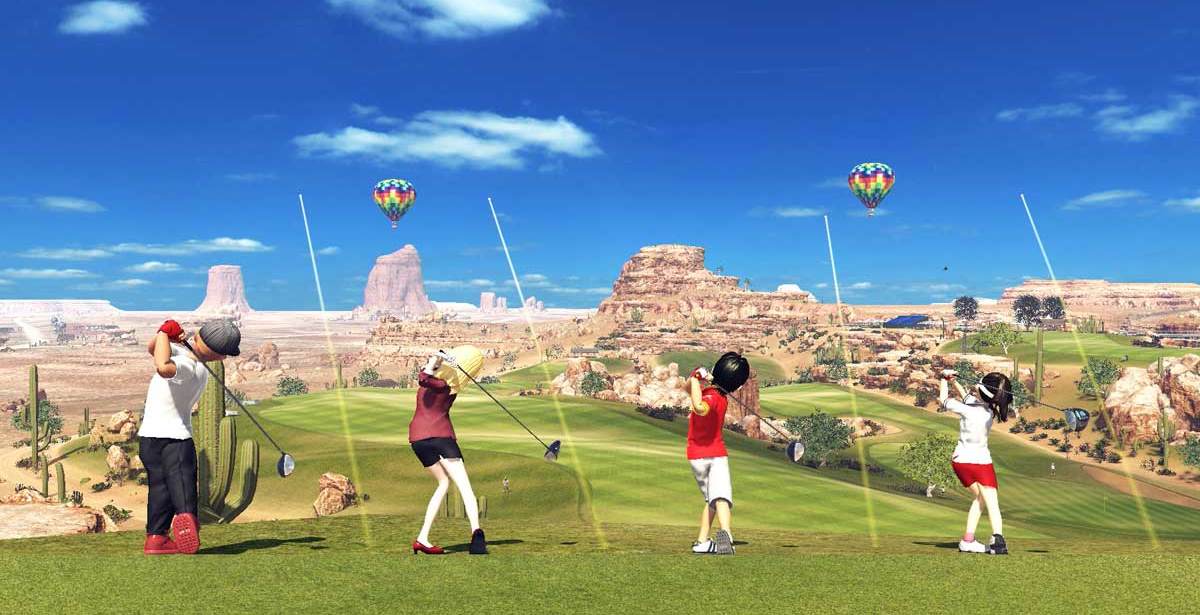 Everybody’s Golf by Clap Hanz has been a staple on Sony’s consoles since at least the PlayStation 2 era. I discovered the series when I eventually picked up a PS3 and was immediately attracted to it as it seemed to be an arcade golf game that didn’t take itself as seriously as EA’s Tiger Woods series. Boy was I wrong. Yes it is cartoony and features outrageous physics-defying feats, but it is in no way simple nor easy. Club choice, weather conditions, wind and surface conditions all affect the game just as they do in real golf, and understanding these things is key to enjoying and progressing. 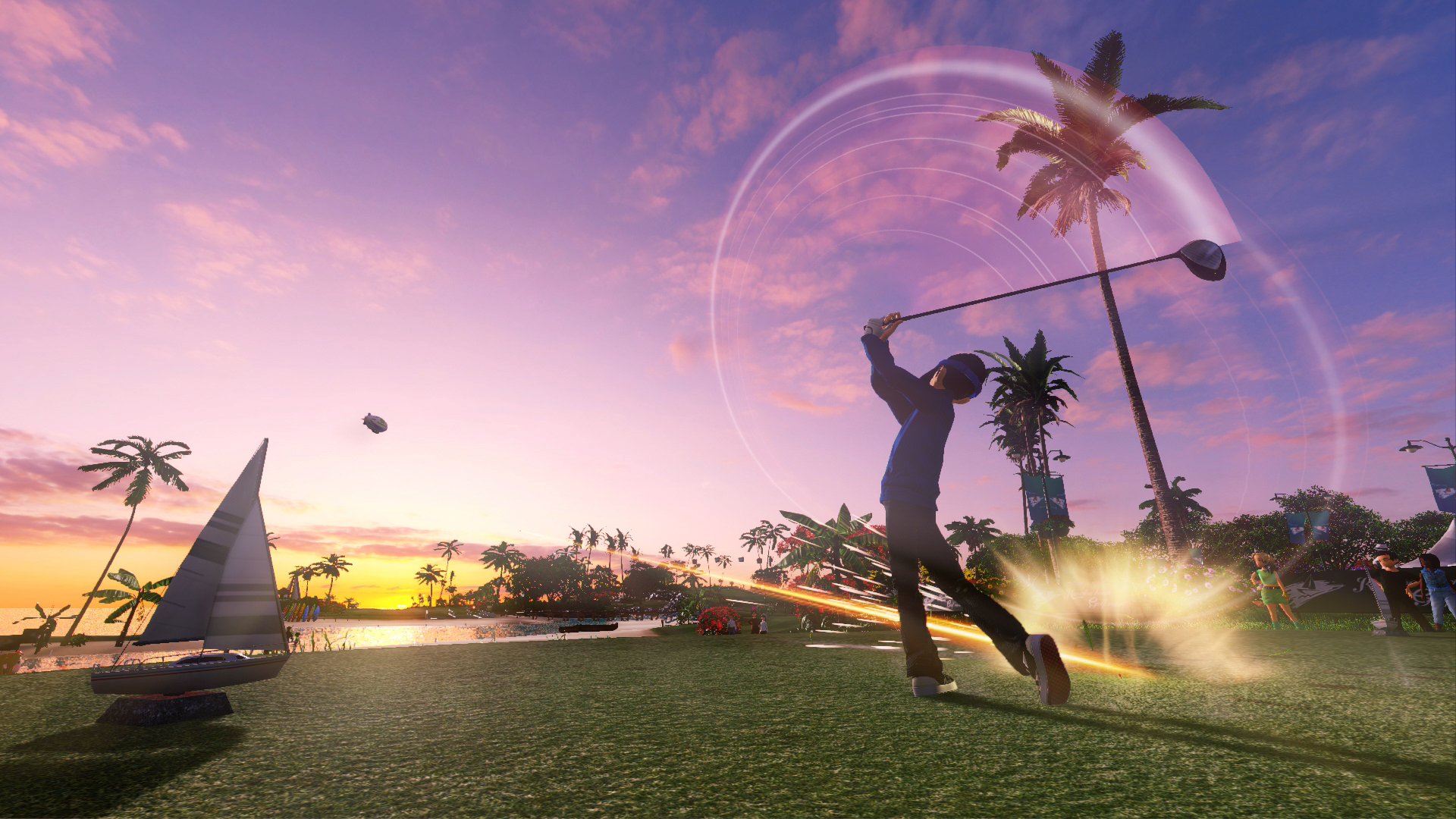 Now unified under the "Everybody’s Golf" moniker, the series has finally debuted on the PS4. The game has added a few new features and unfortunately lost some, the latter to its detriment. The first new feature is the character creator. In previous instalments, you played as one of a number of pre-generated characters and the more you used them the greater their loyalty to you, and so their performance on the course would improve. Here you have the option of creating from scratch, your own avatar.

Character creation is as in-depth as any RPG that I have seen, allowing you to choose everything from eye colour to body type to hairstyle. You could lose yourself for hours in the character generator, tweaking things so that you create that perfect cartoon version of yourself. If you are too lazy or just itching to jump into the game, you can choose a preset avatar that is already available and, for those who fall between these two extremes, you can take that pre-built character and tweak it to give it some sense of uniqueness. 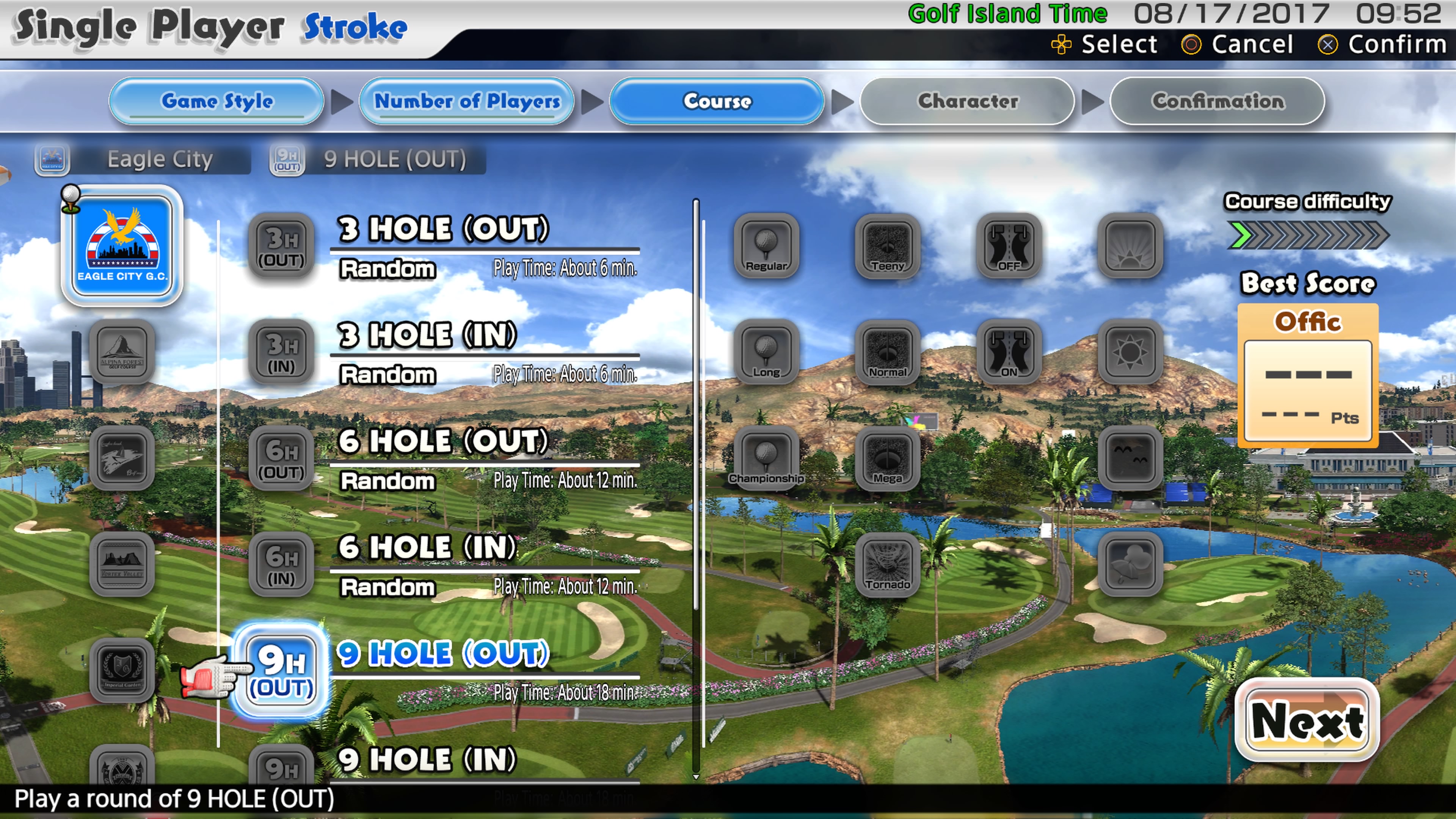 The game drops you into your hub world. This is basically your personal waiting room that serves as the gateway to all the activities in the game. The area is initially just filled with your avatar and some Golf Island staff, and maybe one or two gallery members - bots that follow you around the course as you play. These bots can be copied by spending in-game currency so that you can ape their clothes and style, but they serve almost like the fans in Forza Horizon 3, an indicator of progress and popularity. 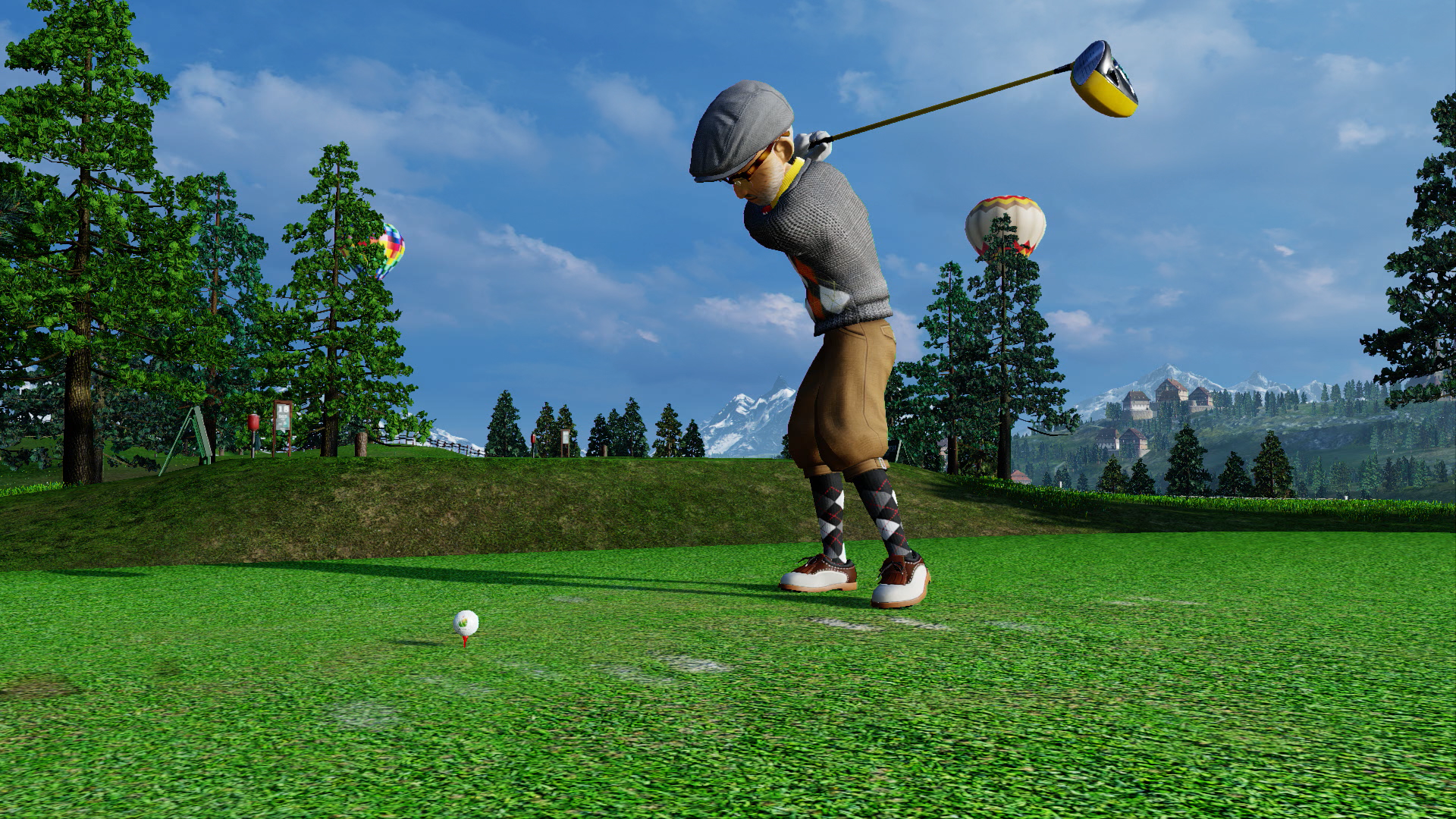 Initially, you can choose to play the single player game by entering tournaments or you can jump straight into the open world multiplayer aspect. The latter is made up of "Turf War", basically a versus match where you team up with someone in a match against another team, and a general open world mode. This open world area is made up of each course in the game where you can practice and play any hole you like to improve your stats and score, or play rounds of golf to set daily scores on the leader board and earn prizes, gold and other currency. Unfortunately, I did not get too much experience playing online as the servers were barely populated (the only people online were other reviewers). But as the biggest new addition to the game it does look robust if a little barebones. I hope that the game is popular enough for the developers to add curated tournaments and other new modes to get people online.

In the open world, you can also partake in non-golfing activities; the most fun is the golf cart races, something we have all been tempted to do on a real course. You can fish, swim and nap on convenient benches (Ed - Why?). As you play your holes, you should explore the area around the fairway as all sorts of collectibles and prizes are hidden on the courses.

The one area where online suffers is the artificial gating-off of courses. Initially, you start with only one course open to you. As you enter official and unofficial tournaments you gain XP that allows you to increase in Golfer Rank. As another RPG element added to the game each level you gain, three per course, unlocks one of two mini bosses, and a final boss that you have to defeat in a head-to-head game. The rules will vary from matchplay to strokeplay, to the crazy tornado cups that make putting and chip-ins easier. As the format is generally the same, there is no variety or anything special about the boss, he’s just the last boss you need to defeat. Defeat him and you unlock the next Rank, which in turn unlocks the next course in both single player and the open world modes.

The process can be a grind, especially if you don’t win every tournament you enter and don’t earn the full XP available. I found that, on average, you need to enter at least three tournaments to earn enough XP and the higher the rank the greater the XP needed for each subsequent rank.

This criticism aside, the grind does allow you to get to grips with the game mechanics. Firstly, the game's style and tone belie the depth and scale of the gameplay mechanics. Striking a ball requires three button presses, one to initiate the shot, one to set desired power level, and one to strike the ball. Exactly the same as previous entries. For new players you can use Auto Strike, which requires only the first two presses with the game deciding on the third. However, if you do not pay attention to the wind, the course layout, whether the ball is above the pin or below, the distance to the pin, and the condition of the course, you will become horribly unstuck. When I lost concentration, I inevitably lost tournaments on a single bad hole as I landed in water, sand under trees and double, triple and even quadruple bogeyed holes. I quickly went from being a sure thing for the win to bottom of the leaderboard ignominy when I didn’t pick my shots carefully.

And picking your shots and paying attention has its own rewards. Another RPG feature is that, as you use clubs, and manage to get that perfect impact, land nearer the hole, use spin, or simply just hit the ball further, your proficiency with that club in four attributes will increase. The further you hit the ball with a driver, the faster you will level up the Power attribute. Use Backspin often when striking a ball with a seven iron and that attribute increases. Land it near the pin using a pitching wedge, your Control with that club increases. All this makes picking the right club at the right time important as you may have more power with a three wood than a driver after a few rounds of golf, just because you favoured the three wood.

Course layout is actually rather traditional. You have the fairways, roughs, hazards and the range of distances you'd find on a normal golf course. Each course has weather conditions, such as wind and rain, but what is missing so far are the almost Putt-Putt type obstacles that allow you to take a chance and grab that highlight reel drive or chip in. I remember scanning the World Tour courses for potential pathways, buildings and other obstacles that I could bounce the ball off of to gain those few extra yards on an approach shot. The one thing that is still available is the ability to actually skip your ball off the surface of a water hazard, if you are brave enough to try it. The funky trick shots are also still in the game. If you time your button presses right and ping the flag you will be rewarded with the ball running up and then down the pole and into the cup.

The sound design in the game is top notch. When the wind is blowing near gale force you will hear the howl; when things are calm and sunny you can pick out birds chirping in the trees. Voice acting is good, but limited as the game is not fully voice acted. Each NPC says one or two words at the beginning of their dialogue and the rest is just text boxes. The game does disappoint when it comes to the musical soundtrack. Each course has a theme and it becomes quite repetitive to the point of annoying. I have honestly started looking for old USB sticks so that I can see if I can use the PS4 background music app to play my own music in-game.

Everybody’s Golf is a worthy addition to the series and a welcome addition to the PS4 library. If you want a game for when you have ten minutes to spare, or one in which you can challenge yourself as you seek to set better scores on the leaderboards, look no further. Despite the game losing some of what made it fun and unique, it is still an Everybody’s Golf game, easy to play but difficult to master.

Open world is a nice addition

Character creator is deep and complex

Music is a bit of a letdown 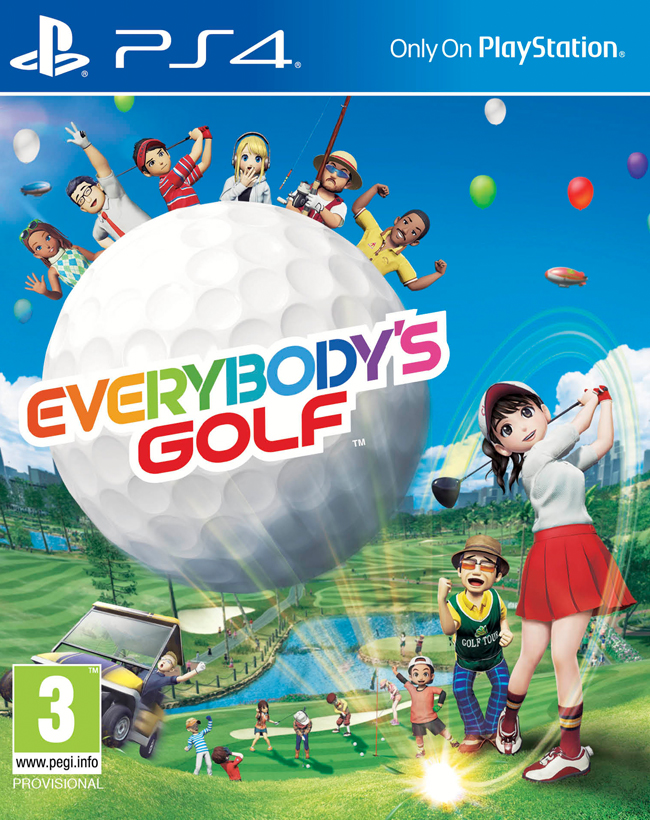