You will love the grind! 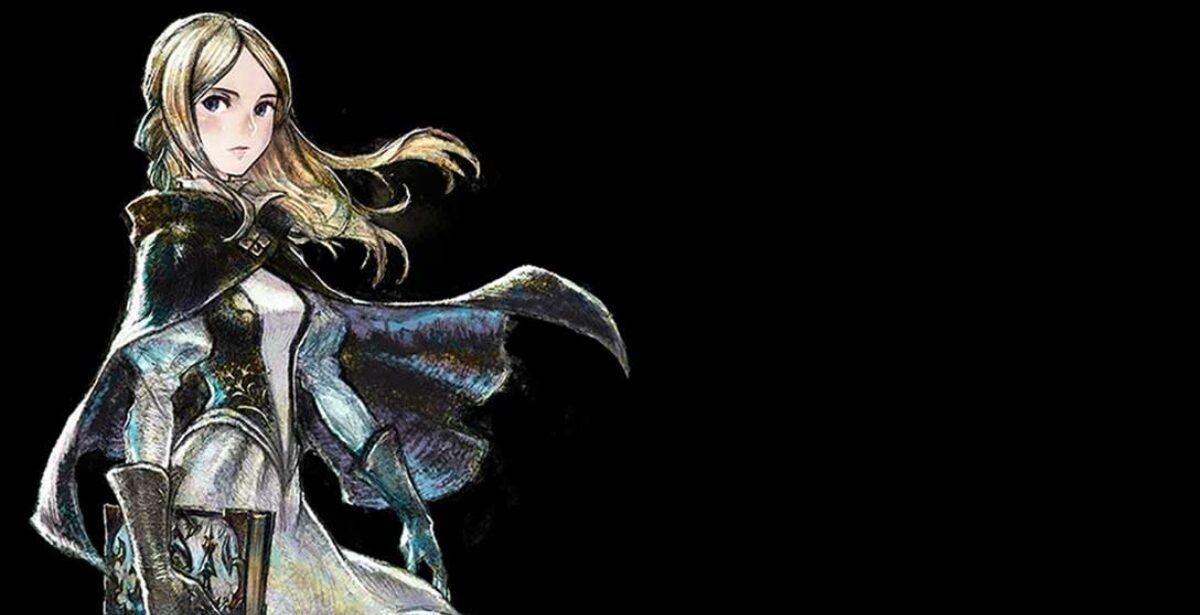 JRPGs have endured the vagaries of the gaming industry for close on forty years and it is not difficult to see why. The melodramatic acting, the deceptively simple yet intricate battle systems and fantastical stories all make for an engrossing play time. While the genre has evolved, with some games moving to real time battle systems, and graphics seeing improvement, the one thing that has remained a constant has been the grind. Bravely Default II is no exception, you will love the grind or else!

Bravely Default II is the third game in the series despite the “II” behind the name. However, you do not need to play those games as this is not a direct sequel, instead taking place on a new world with all new characters. It is like Final Fantasy in that way, in that each main numbered game is a whole new game with no connection to the previous ones. What it does have in common with those games is the Bravely Default battle system. No one has ever accused JRPG developers with a talent for creating names that attract a player's attention. 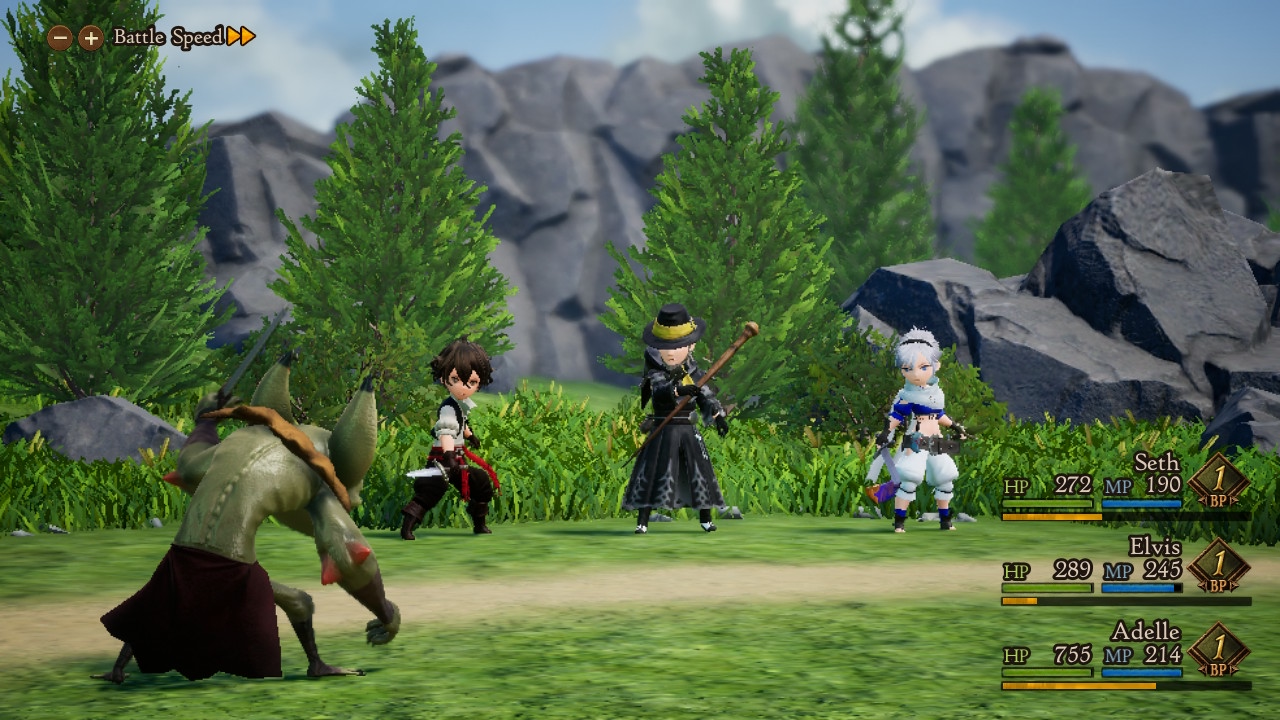 The Bravely Default system adds a new wrinkle to your combat tactics. While at its core it is still a turn-based combat system, the system gives the player the option of being aggressive or more conservative using the Bravely and Default commands. The former allows you to immediately perform up to four actions in your turn, but at the expense of losing the next three turns. Default allows you to bank your turns so that you can unleash a devastating blitz attack on your enemies.

...the system gives the player the option of being aggressive or more conservative using the Bravely and Default commands.

I love this system as what has always annoyed me about turn-based combat is that when someone is knocked out you usually need to use two characters out of your party of four, three standing, with one to revive and the other to hit the newly revived character with a Potion. If you do not do that, you run the risk of your newly revived character being knocked out again. With the Bravely command you can use one character, say your White Mage to cast Raise and then cast three Cures to get that knocked out character back to fighting fitness. Of course the enemies have the same system so be careful because that weak goblin can still cause you a ton of pain. 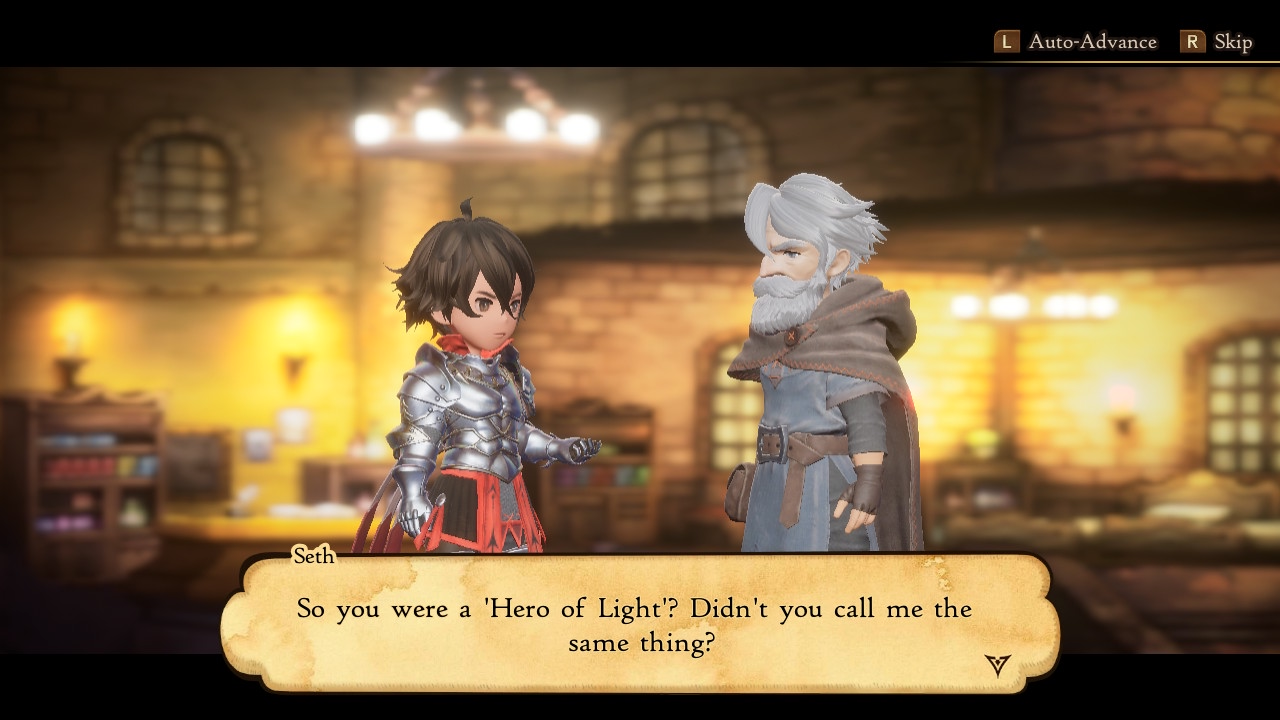 Adding more complexity to your tactical decisions is a day/night cycle as monsters are more aggressive and plentiful at night, making traveling at night a great exercise in risk/reward as you can gain greater XP and Job Points (JP) at night at the risk of getting knocked out. And you are going to need those rewards. XP is definitely the lesser of the two as all it does is improve your HP and MP stats. JP is especially important as you will collect Asterisks as you defeat bosses which give you access to new Jobs or classes in western RPG terms.

These Jobs are levelled up by JP and this can accumulate slowly in battle unless you do things like using different types of bait to attract certain enemies so that battles can stack, which adds a multiplier to the JP reward. Using bait is again an exercise in risk and reward as the accumulation is attractive to level you up for the bosses but stacking too many battles could leave you severely weakened (low HP and MP) risking a game ending death. Luckily for us, the game is generous with saves allowing you to save anywhere you want except in dungeons which still use the antiquated save point system. 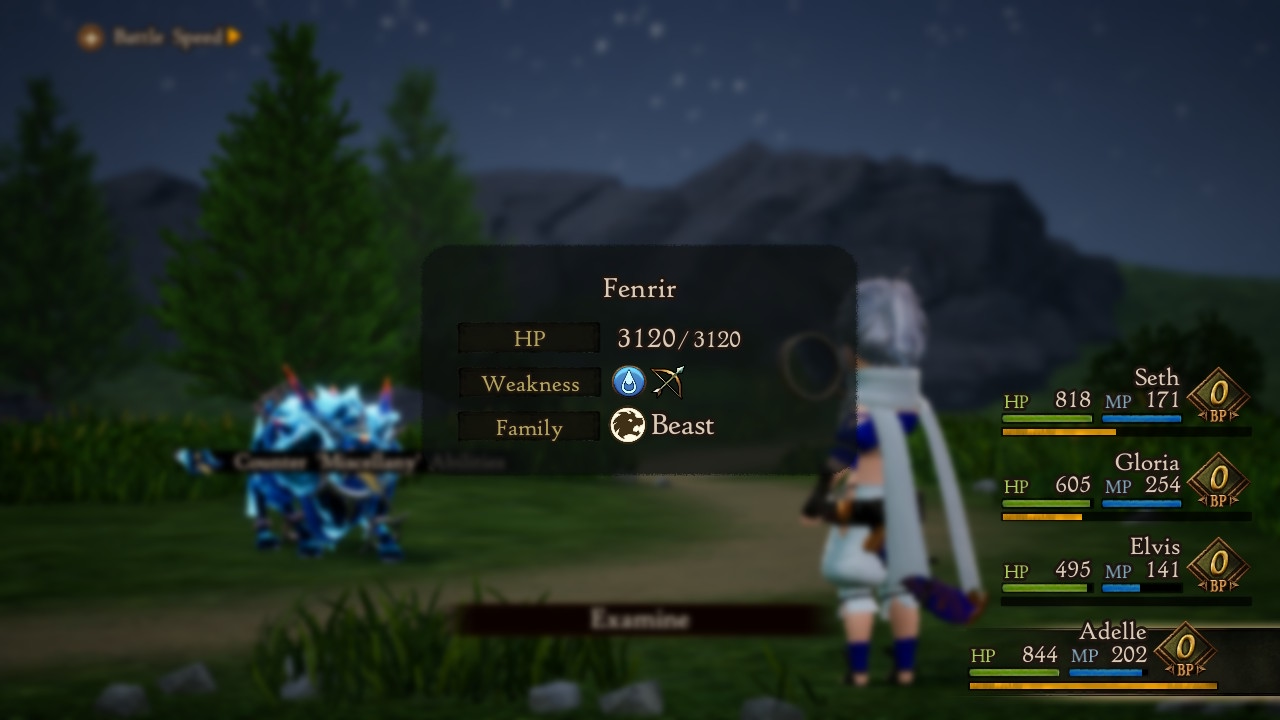 All of this assists you with the grind but grind you must. Bravely Default II does have an unbalanced difficulty spike as most monster encounters are manageable even if you are slightly under levelled for the area, but bosses are a different story. Oh boy, the bosses can be buggers, especially if you get the mix of experience level, job level and job combinations wrong. Each boss has a series of weaknesses mitigated by some devastating attacks and powers along with high HP levels.

Oh boy, the bosses can be buggers, especially if you get the mix of experience level, job level and job combinations wrong.

To exploit these weaknesses and protect against these attacks you must have the right jobs active as well as at the right level. One boss may be immune to Water and Thunder Attacks while particularly vulnerable to Fire as well as swords and spears, but not bows. Making sure that your party has a good mix of all these attacks will make your life much, much easier. Helping, somewhat, is the fact that you can have a main job active with a sub job. The latter won’t accumulate JP, but gives you access to that job’s skills and attacks making for what D&D players would call powerful Dual Class characters. While this adds depth to the systems, it is unnecessarily grindy. Difficulty spikes like this and the necessity for grinding is an old-fashioned mechanic and one that JRPG developers need to move away from. 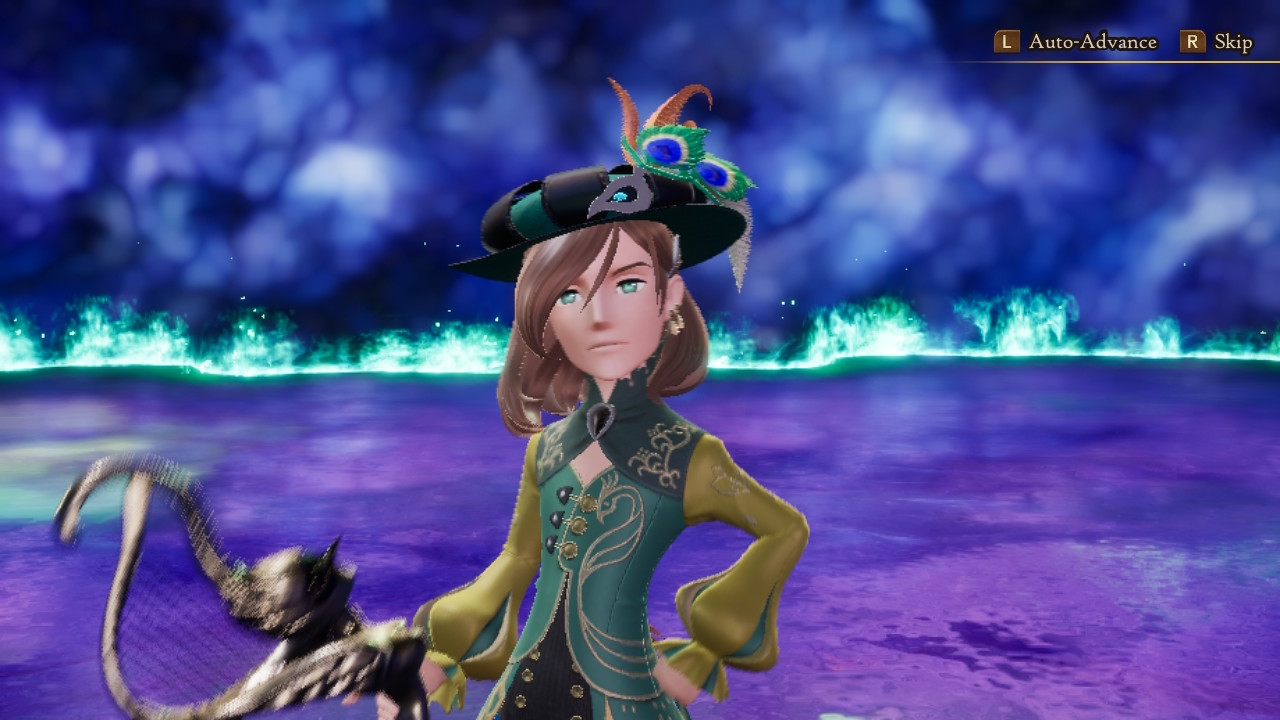 Another old-fashioned trope relates to the narrative design. Starting with the main characters, each being special in some way and chosen to bear a McGuffin that can either save or destroy the world. In fact the basic premise is a straight up homage to Final Fantasy as you and your three companions are the fabled Heroes of Light for this era tasked with retrieving and protecting four Crystals that control Earth, Wind, Fire and Water. Of course the big bad is a power-hungry megalomaniac looking to conquer the world who will stop at nothing to rule it all. The story is low effort, but it is tried and true and while it did not push me to push further on in the story it was interesting enough to keep me interested. Changing the VO option to Japanese certainly helped with that. 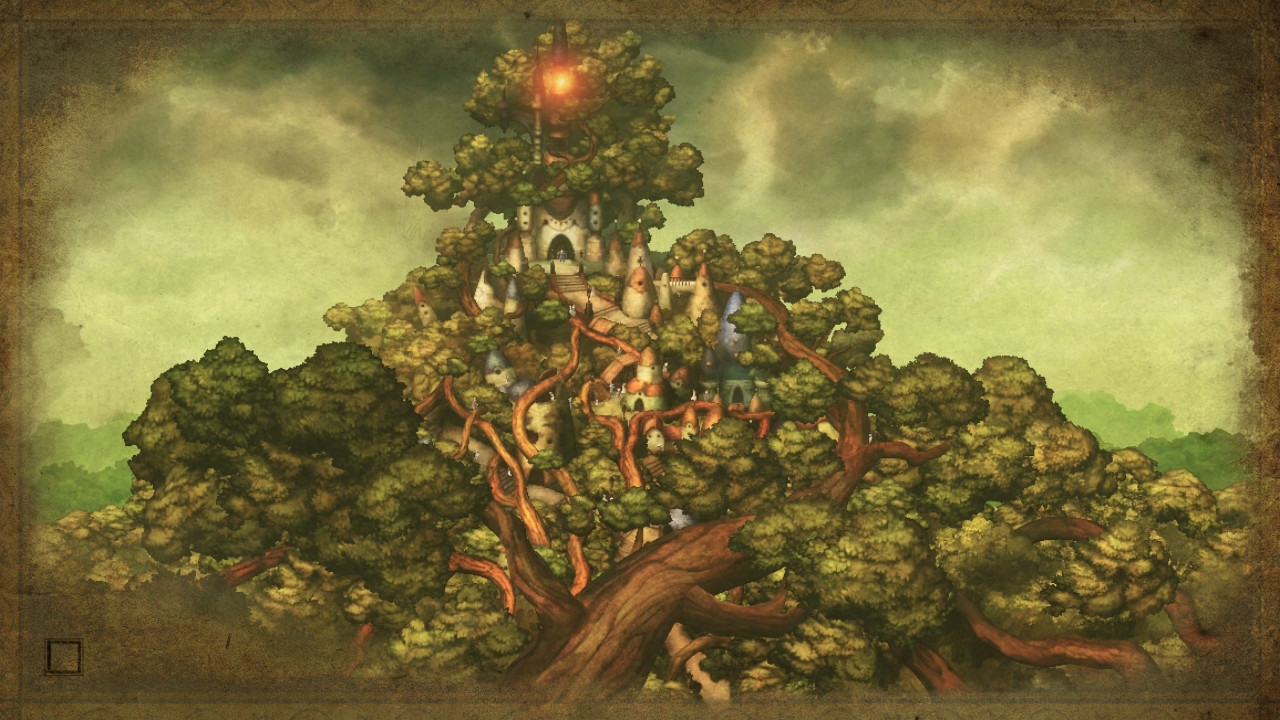 The story and the Grind may be a con for being a little too retro, the art design is a resounding pro. Following on from Octopath Traveller the backgrounds are gorgeous 2D paintings that give up a little detail every time you look at them. The characters are 3D models in the chibi art style. This style can be hit or miss making characters look like oversized babies, but this game’s design strikes a balance between cute and not creepy oversized baby.

Bravely Default II is a good addition to your JRPG library on the switch but it is not essential in the way Octopath Traveller is. The art design and the Japanese VO work is outstanding, but the constant Grind and rote story detract from the overall package. 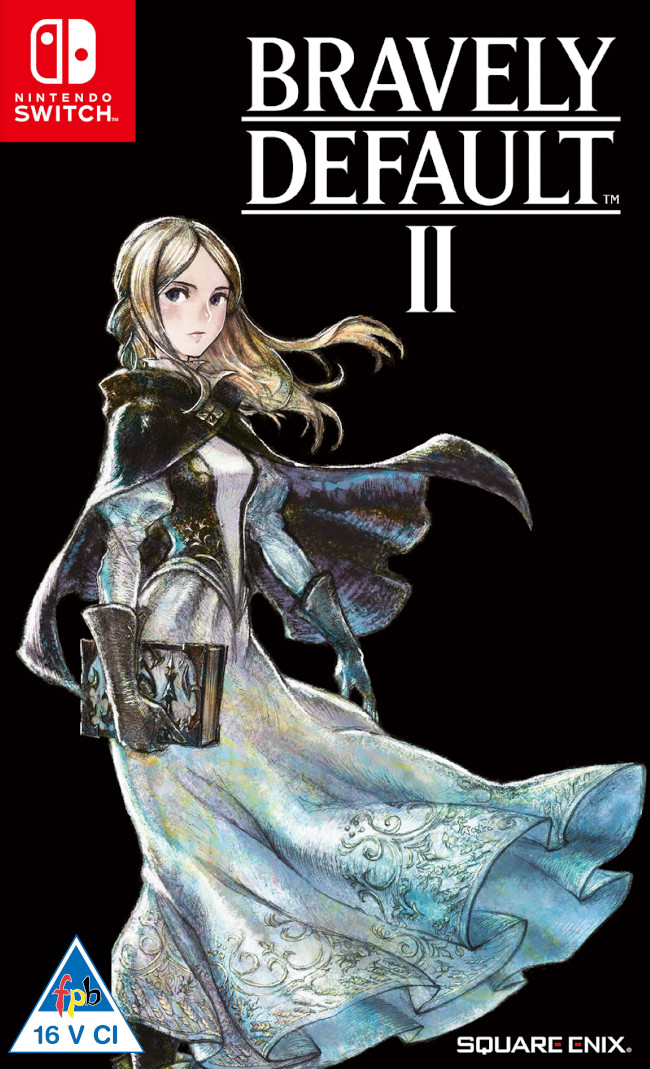