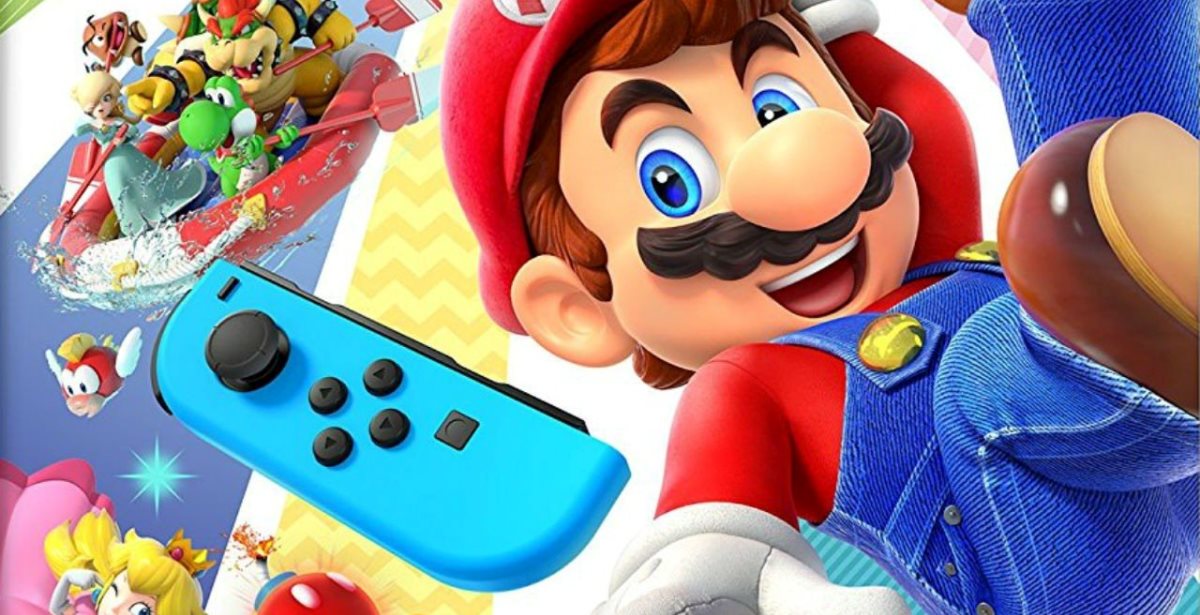 Let’s face it, the Mario Party franchise is in desperate need of a reboot. If I think back the last game is the series that I truly enjoyed was Mario Party 7. That’s over 10 years ago. Thankfully, after my initial concerns regarding motion control implementation in the mini-games Super Mario Party looked promising; going back to the four-player basics that sees players take turns to move across a variety of boards in search for those ever-elusive stars sprites. After only a few hours I realised that I was completely addicted to the classic feel and new improvements that Super Mario Party provided sees the party game titan finally return to glorious form. 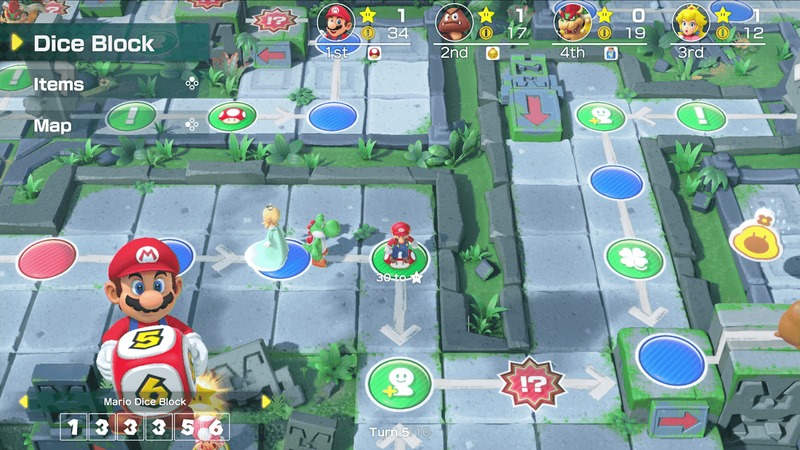 Super Mario Party goes back to the traditional way of playing Mario Party back in the good ‘ol days, where four players take turns to steer their way around. Some newer aspects of the series have remained, however giving Super Mario Party a ‘best of’ overall feel. Most notably the ‘ally’ mechanic from Mario Party: Star Rush on the Nintendo 3DS makes a welcomed return. This allows players to increase their team of characters by collecting party members spread throughout board locations. The additional characters will add to your dice rolls as well as appear by your side during mini games.

Super Mario Party goes back to the traditional way of playing Mario Party back in the good ‘ol days, where four players take turns to steer their way around. 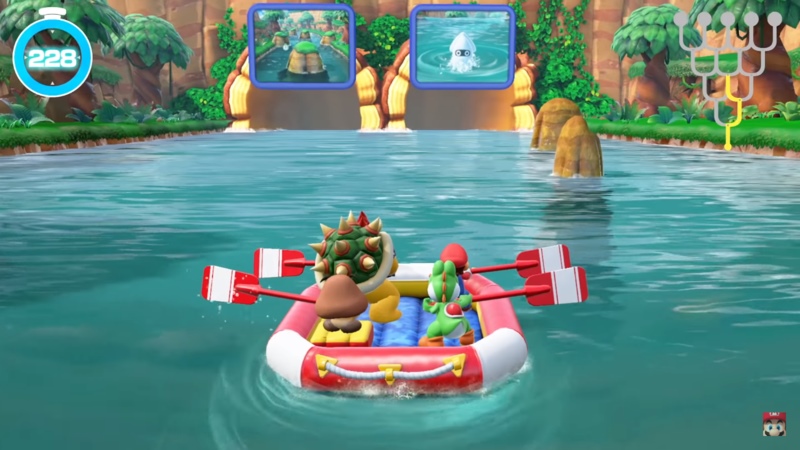 In addition to the standard 1-6 Dice Block available to all players, each character has their own unique dice that can be used over and above the standard. While some characters dice may seem to provide an advantage over competitors, they remain surprisingly balanced. Princess Daisy’s fairly bland 3-3-3-3-4-4 dice can prove just as effective as Yoshi’s more optimistic 0-1-3-5-5-7 dice.

If lady luck favours the roll of your dice, you will have the opportunity to purchase items from Flutter using the coins that you’ve accumulated along the way. Some items include a Dash Mushroom that gives you the three extra moves on the board, a Poison Mushroom that takes away two of your opponent’s moves and my favourite, the Custom Dice Block that lets you roll whatever you want between the values of 1 to 6. Across the board you’ll also encounter Hidden Blocks that give a character a random chance to obtain a highly regarded Star. The cloud symbol on the board summons Lakitu to steal coins or a Star from a chosen opponent. Warning: This has the potential to completely destroy friendships, but all is fair in love and Mario Party! 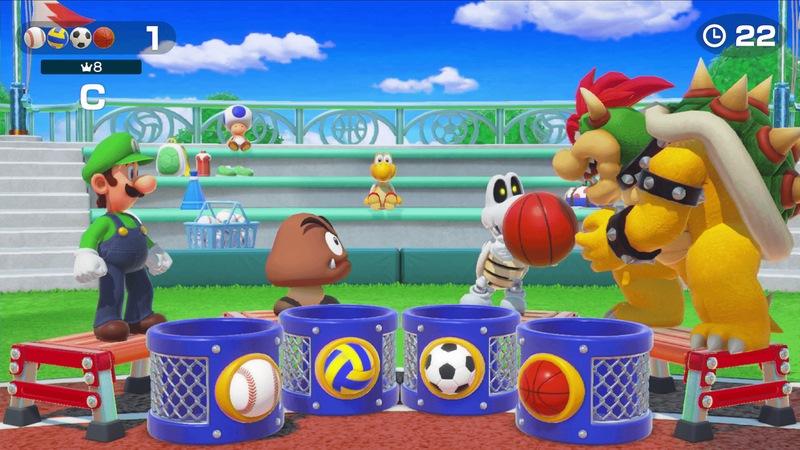 Part of what makes Super Mario Party so engaging and enduring are the variety of game modes. Party Mode is the traditional four-player mode that sees each player compete against each other for the most Stars. The Partner Party mode is the greatest improvement in Super Mario Party. While similar to the regular party mode, two players team up and face another 2-member team. The players dice rolls can be combined much like the Gamecube Mario Party titles. This also features a grid-based layout giving characters freedom of direction and the ability to stop one competitor to get more coins.

Part of what makes Super Mario Party so engaging and enduring are the variety of game modes.

Toads Rec Room is a great example of how the game takes advantage of the Nintendo Switch's local wireless features and unique multi-screen tablet-like features. This needs two Nintendo Switch consoles and sadly two full copies of the game in order to enjoy this mode to the fullest. The River Survival is a co-op-based mode in which four players paddle a lifeboat through rapid white water towards a finish line. To beat the timer players are required to play a number of co-op minigames. Your time increases with every minigame successfully completed. In the Sound Stage mode, you are presented with competitive rhythm-based minigames with the winner rewarded with a tic tac toe like block on a board. The first player to fill the board is announced as the winner back-to-back while trying to get the highest score. 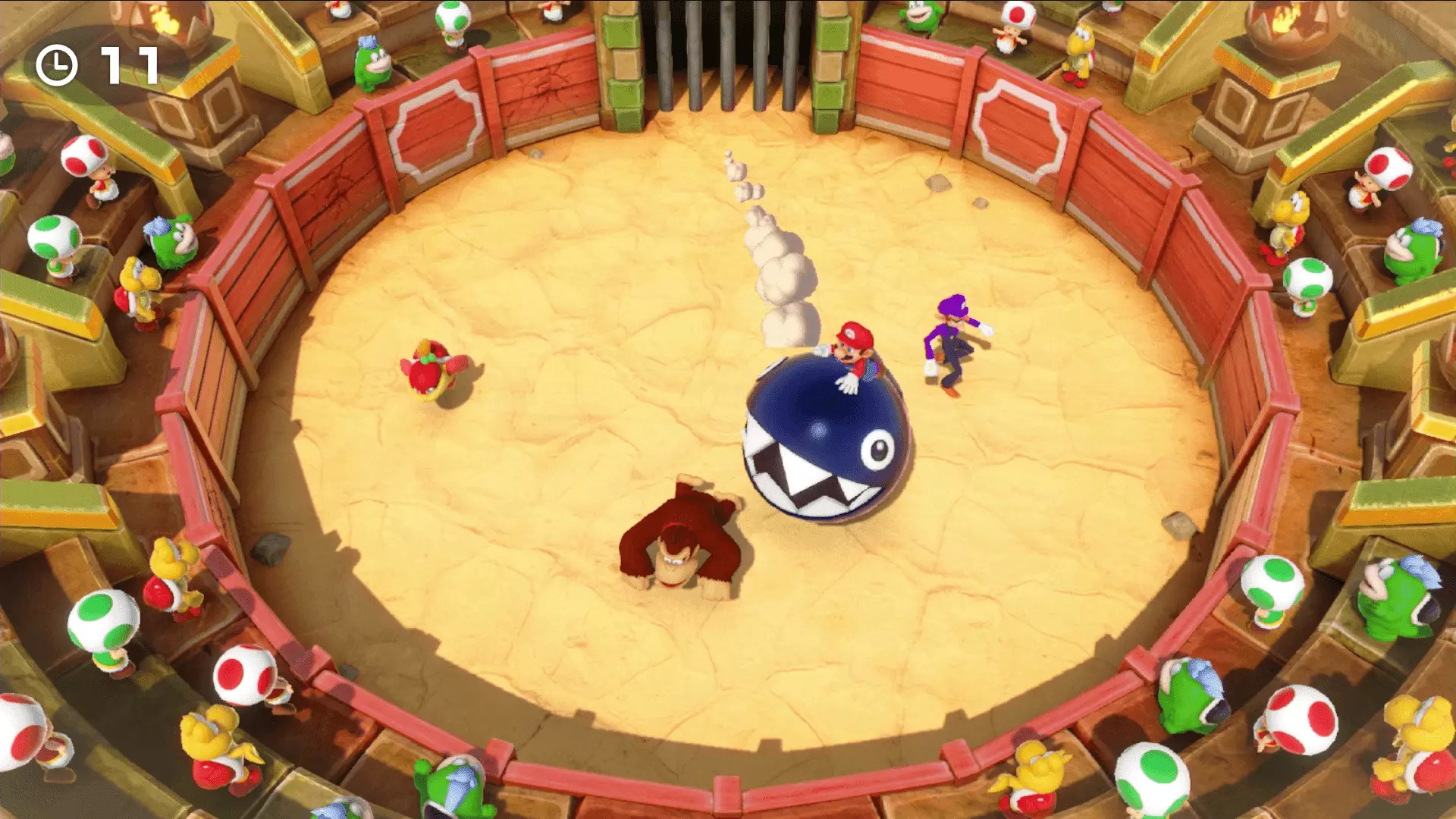 Challenge Road is just a single player minigame mode, easily the least inspirational mode in the game but a nice to have never the less. The Online Mario-thon mode promises online gameplay in five randomly selected minigames. This feature was unfortunately unavailable at the time of this write-up for a high score. Lastly, the minigames are all available to play in co-op mode individually once unlocked.

With a multitude of innovative minigames, a tried and tested return to traditional gameplay and well varied game modes, Super Mario Party marks a return to form from the party franchise that we once knew and loved. If you’ve found yourself disappointed with the past few installments, then Super Mario Party for the Nintendo Switch is the couch co-op party title that you simply need to pick up.

No online play at the time of this review 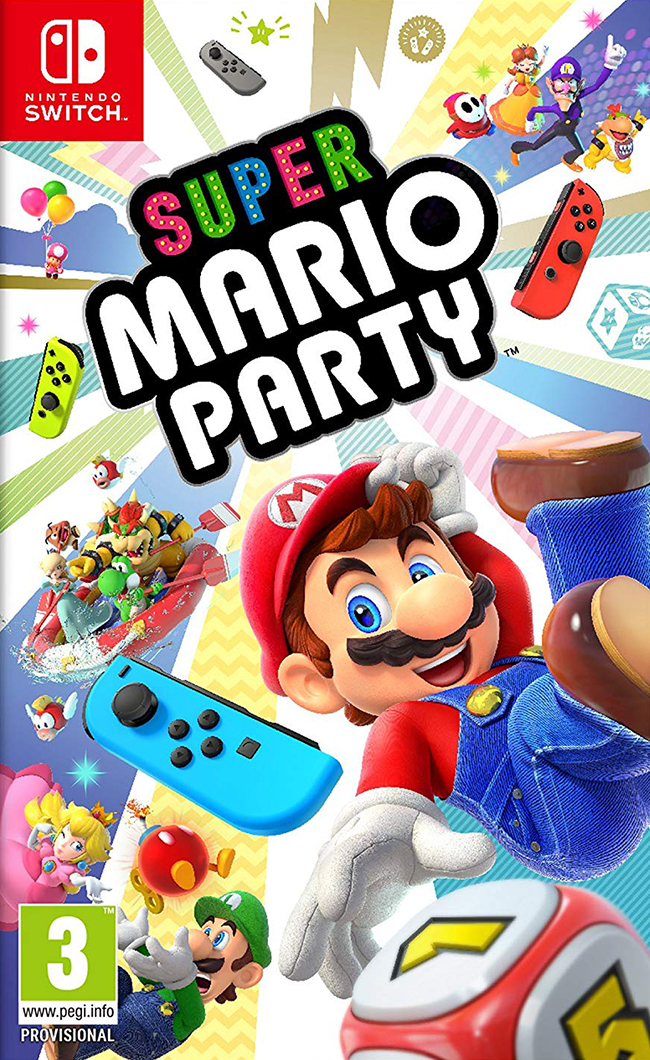