By ash and oak. 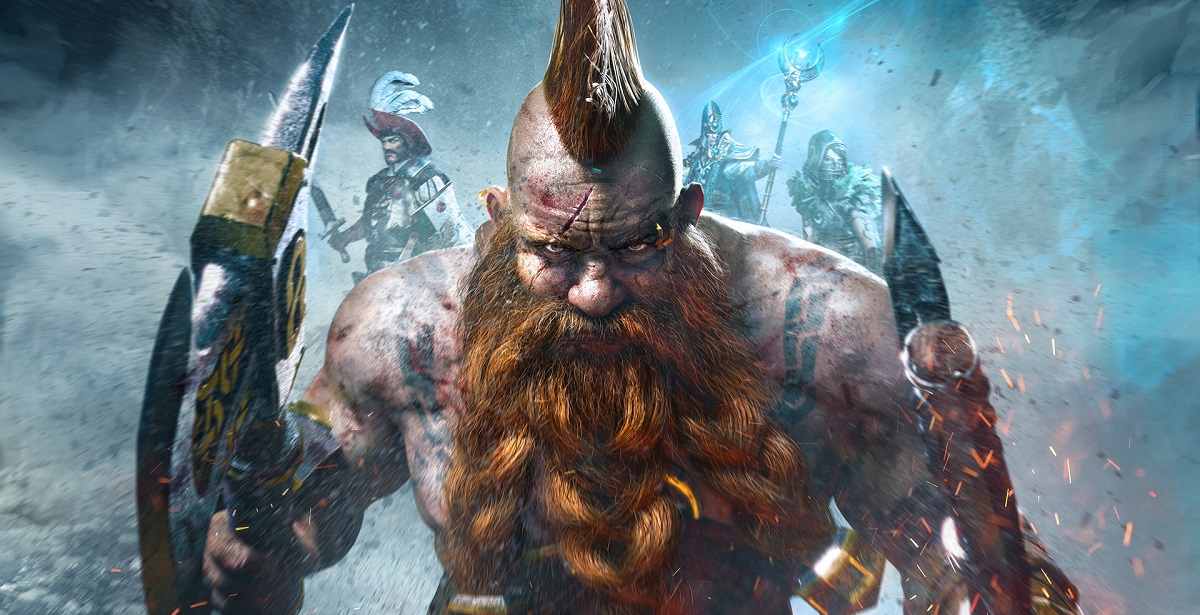 Warhammer: Chaosbane bears the mantel of being the first ARPG set within the Warhammer universe. For a new Warhammer game, it does a great job, but as the first ARPG in that universe; it has a couple of shortfalls. I had a great time playing through it, but this is also a problem... once you play through it, there's very little to draw you back in. This, coupled with some annoying pathing issues when using a mouse and keyboard, does detract from the experience. Future content might change this, but I can only write about what I currently have before me. So, without any further delay, let me take you through my experience. 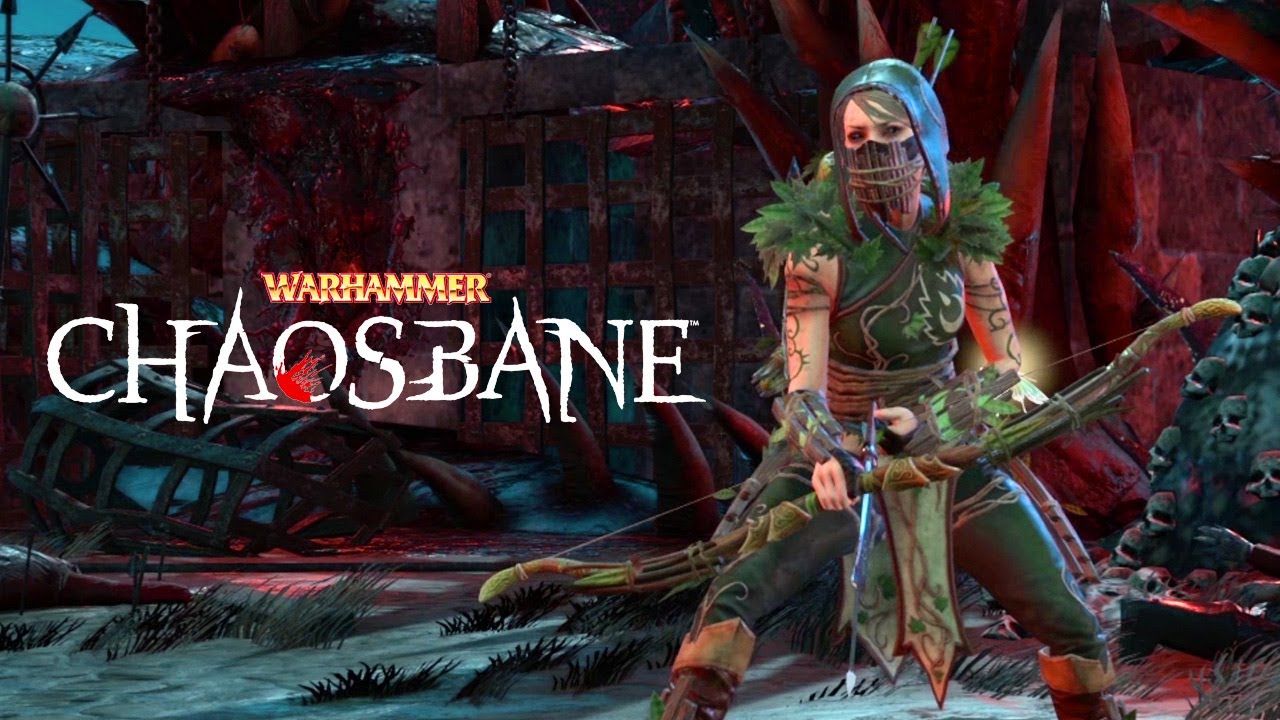 Personally, I feel the linchpin of any Action Role-Playing Game is its combat. Thankfully, this is where Warhammer: Chaosbane shines the brightest. The four classes in Chaosbane are Konrad Vollen the Empire Soldier, High-Elf Prince Elontir the Mage, Bragi Axebiter the Slayer, and last but not least, Elessa the Wood Elf Scout. Each character feels distinct enough to warrant a playthrough on its own. Konrad Vollen is a standard tank character, able to buff himself and teammates, break through the hordes and dish out a respectable amount of damage. Prince Elontir actually feels like a respectable mage, slowing, burning and stunning enemies with his abilities. Elontir is definitely not your typical squishy mage archetype. Bragi Axebiter is here to deal damage, and man is he good at it. Swinging his axes at foes, regenerating health and generally just destroying hordes of enemies is what Bragi does best.

Personally, I feel the linchpin of any Action Role-Playing Game is its combat. Thankfully, this is where Warhammer: Chaosbane shines the brightest.

Elessa the Scout can summon companions, poison enemies, and impale those who stand in her way. This agile Wood Elf can easily evade incoming damage while keeping the pressure on enemies. Each class also has a Bloodlust ability. This ability can be manually triggered when you collect enough red orbs to fill the appropriate flask. Another level to customize your character comes in the form of the God Skill Tree. This passive tree, unlocked rather early in the game, allows players to add passive buffs to their characters. These passives can be unlocked (added) by spending fragments and gold crowns, which you find throughout the different levels. Ranging from health boosts, more damage, and even brand new abilities, God Skill Tree adds value to your character. 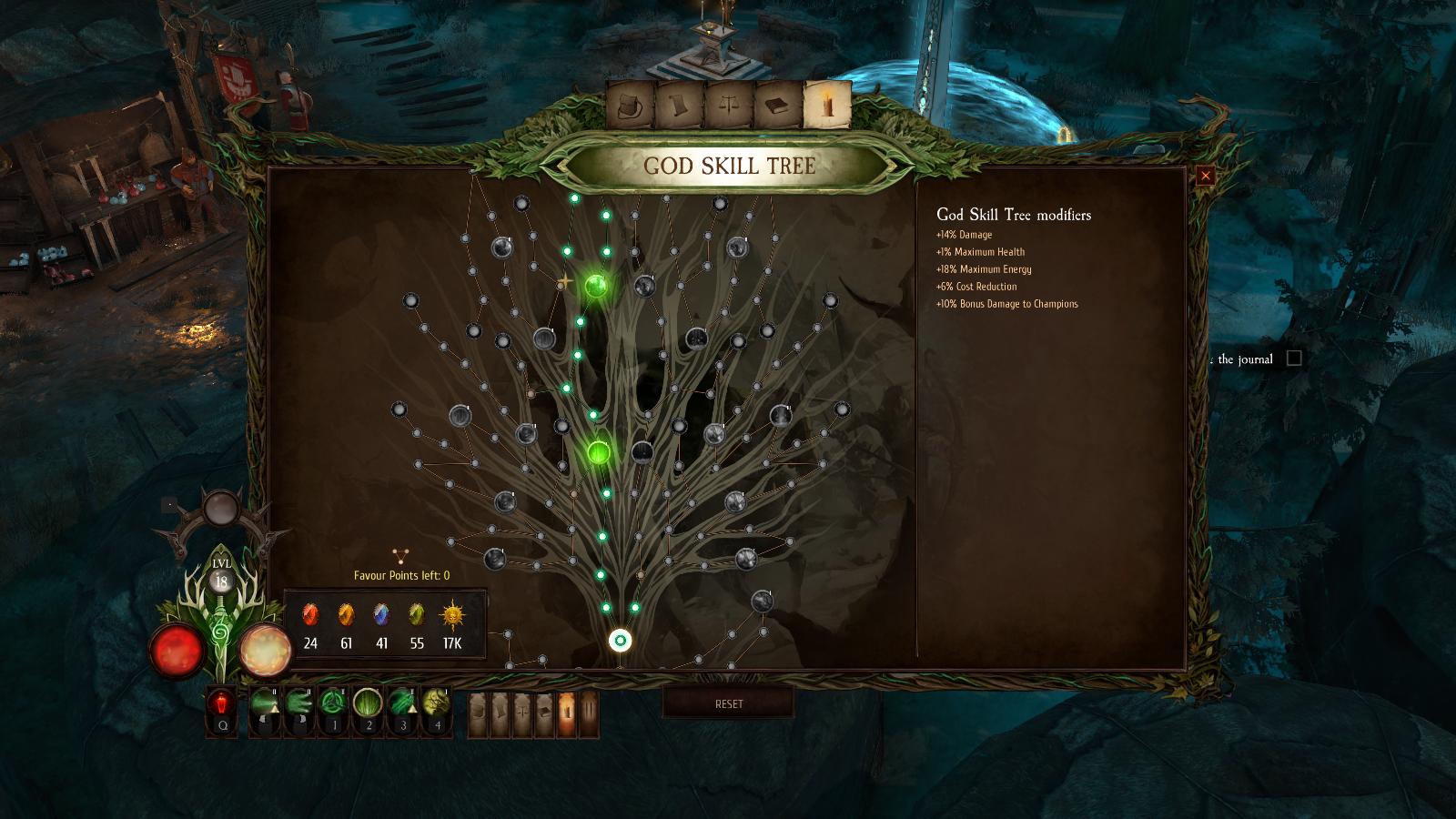 Although loot is abundant in Chaosbane, they all feel a bit generic. The loot you collect throughout your journey essentially boils down to little green plus signs. If a new item gives you more green plus signs, you know it's the one to equip. So, in essence, the loot becomes a digital picture with either green plus signs or red minus signs. This, in turn, makes building a unique character redundant. Going for more attack and more defense shouldn't be the only stats you look at when collecting tons of loot. Anyway, let's jump into environments. 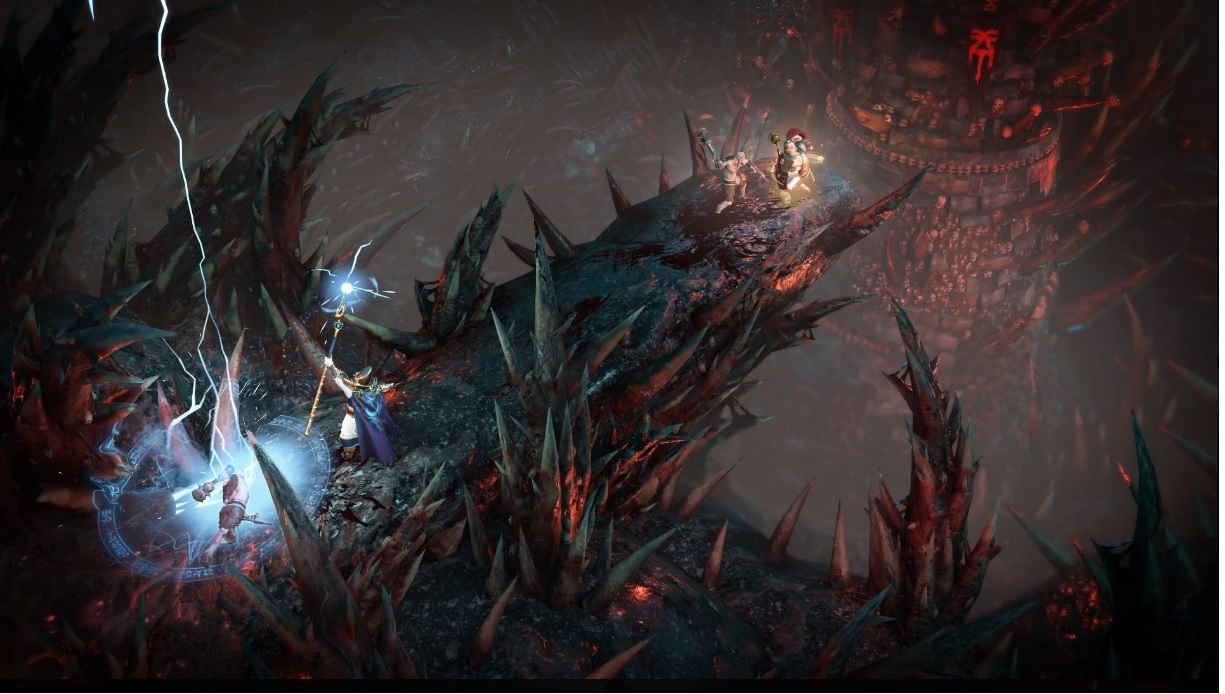 Though there aren't that many environments, the few you play through are beautiful. Sickly sewers, snowy plains, eerily quiet streets, weird spikey places (reminiscent of Elder's Recess in Monster Hunter: World), they're all good-looking. Mostly devoid of anything interesting to do except kill baddies, but at least they are pretty to look at.

Though there aren't that many environments, the few you play through are beautiful. 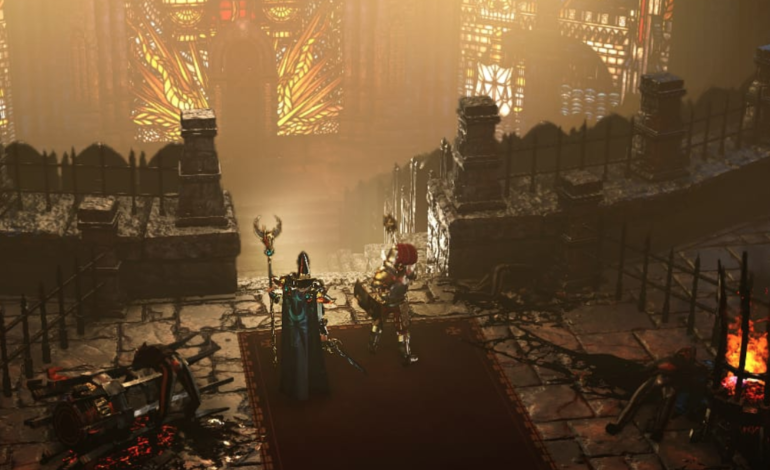 Beautiful environments aside, another shortfall in Warhammer: Chaosbane is the voice acting. Don't get me wrong, not all spoken dialogue is bad, there are some moments where the voice actors shine. It's just unfortunate these moments are so far and few between. Personally, most Warhammer games have always had a B-movie feel to them when it comes to voice acting. This is fine, as I've come to expect, and ultimately enjoy it. But, even still, the gap in quality between B-rate and bad is quite large. If you are someone who gets irritated or put-off by bad voice acting, Chaosbane will definitely test the tension of your nerves.

I feel like I should also mention that developer Eko Software has made available their future plans for Warhammer: Chaosbane. Free content will be a new difficulty level, new loot, permadeath mode, new heroic sets, new level cap, and new skills for the classes. The Season Pass content will have an emote pack, new God Skill Tree passives, new skills, pet pack, and a new main story quest (set in a new location). These are all great content updates, and doesn't even account for out of plan bug fixes and updates.

Warhammer: Chaosbane is a solid ARPG, of that there is little doubt. The combat, character classes, variety of enemies, and fun boss battles makes for an enjoyable experience. There are some issues with the game - bad voice acting, movement hinderances, and some graphical hiccups. These are frustrating and will need fixing, but can be played through. Future content is sure to expand upon the great base game, allowing players to dig deeper into the game. If you're looking for a fun ARPG, Chaosbane provides exactly that.
8 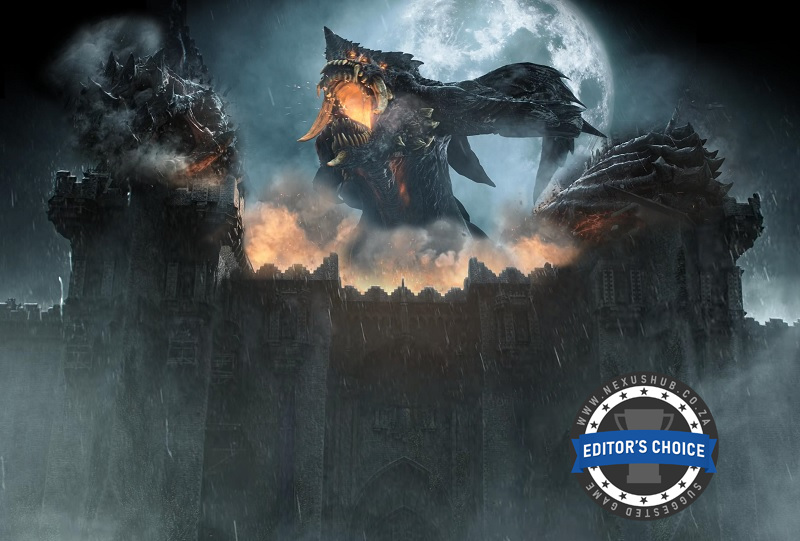 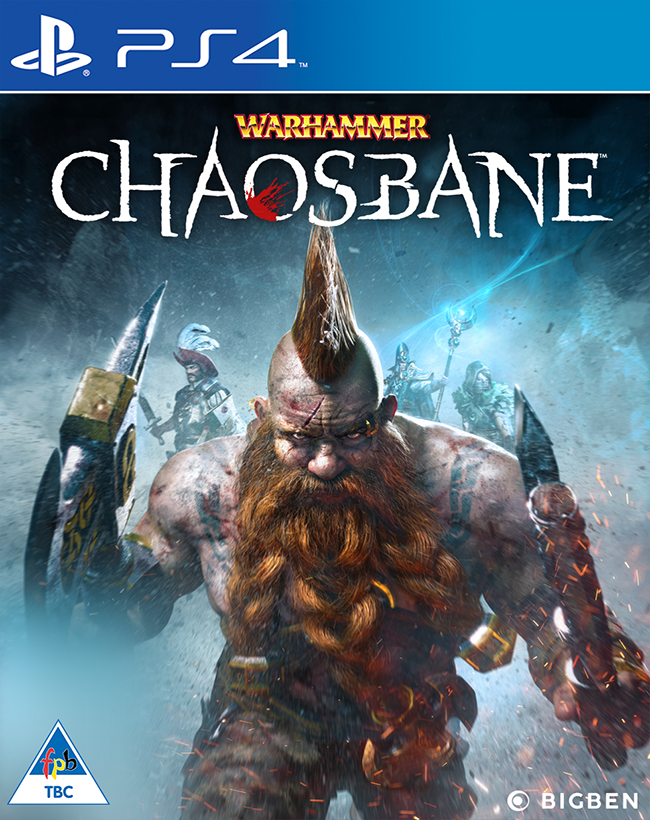