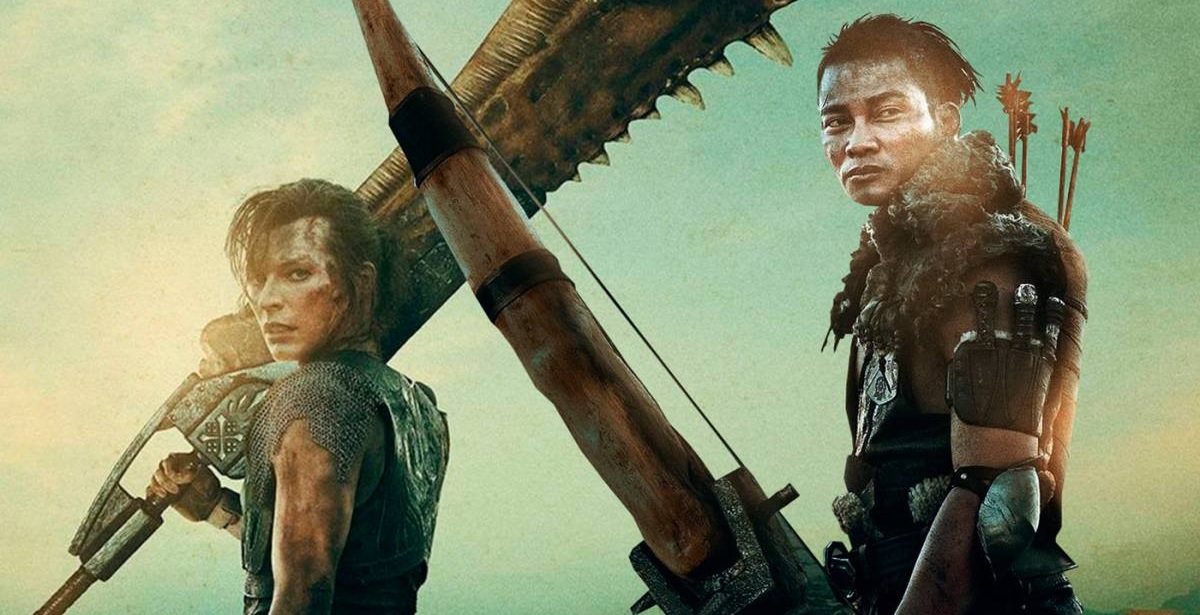 Ever since news broke that Paul W.S. Anderson, the director behind 1995's Mortal Kombat and the Resident Evil movies, would be helming a live-action Monster Hunter movie, hesitation kicked in. I was only partially excited at the prospect of seeing these creatures finally come to life on the big screen, and altogether just having enough momentum to actually become a movie since the video games were (and arguably may still be) quite niche. After seeing the movie, some of my fears were put to rest. Monster Hunter is a fun, mindless action romp that does its roster of monsters justice, though leaves a lot to be desired too.

Note: This review is completely spoiler-free. 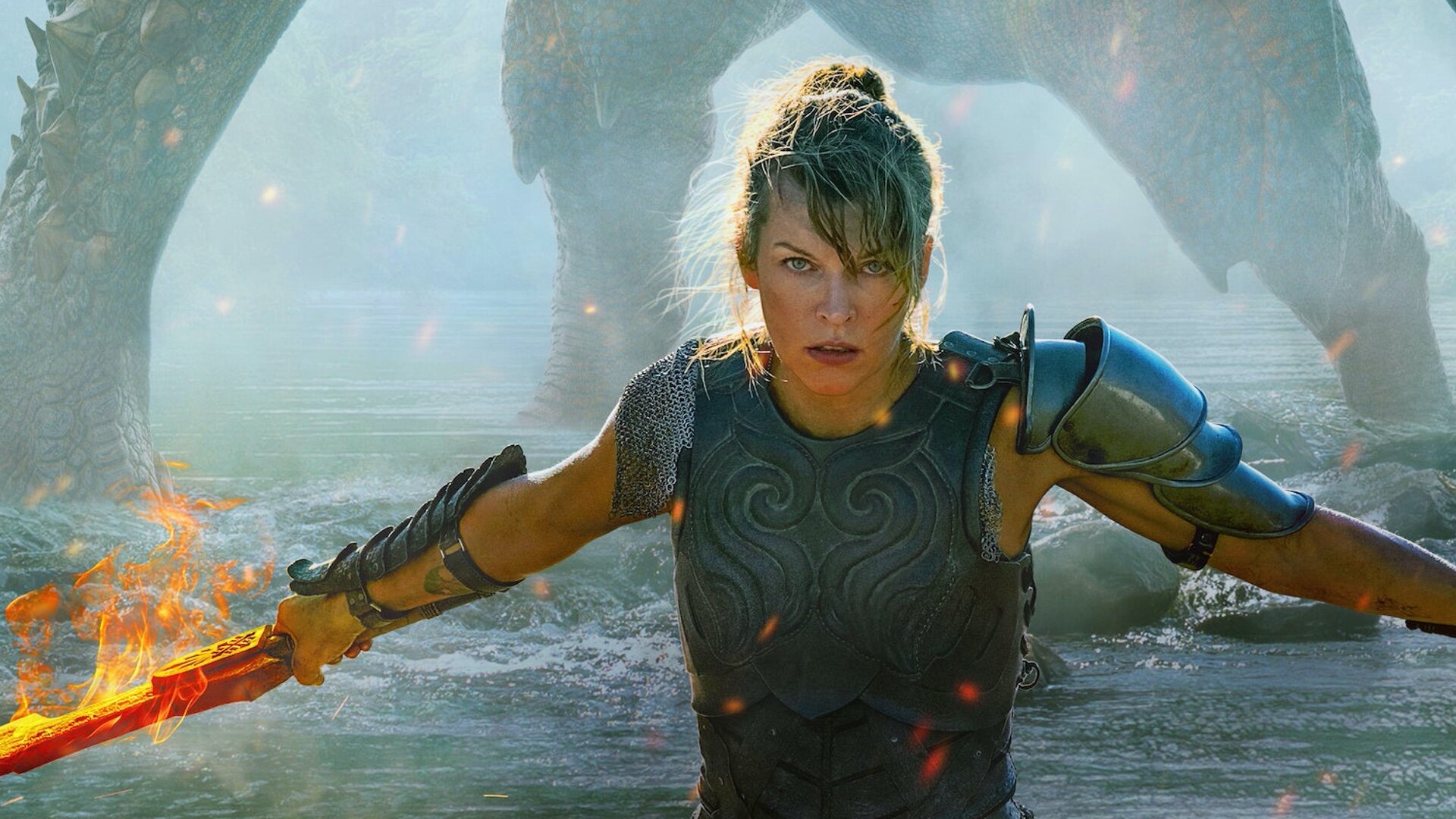 The story starts with a group of American soldiers in an undisclosed desert location who are suddenly whisked off to a strange new world by way of a massive electrical storm. The group's captain, Milla Jovovich's Natalie Artemis, takes center stage as they all soon realize that the new world they've been teleported to is inhabited by terrifying monsters out to kill them. Artemis meets a solo hunter named, well, Hunter (played by Tony Jaa), who teaches her the ropes and together, they set off on an adventure to return Artemis to the real world and close the portal before more monsters begin to leak into our world.

There's little attempt at world-building here, and the few instances where it does try to offer more meat to its world, it's glossed over in a blink.

As far as narratives go, this is about as much as you'll get - which is a bit of a missed opportunity. While older Monster Hunter games were relatively thin on plot, the latest entry, Monster Hunter World, took leaps in the storytelling department and Capcom were able to craft a compelling story held together by the same monster hunting fun we've come to expect. World is a masterclass of world-building, rich with detail and lore spanning decades, and there was a lot of potential here for the film to capitalize on. Unfortunately, Anderson's film sidesteps these world-building possibilities in favour of a more straight-forward blockbuster flick. There's little attempt at world-building here, and the few instances where it does try to offer more meat to its world, it's glossed over in a blink. Part of the problem is the film's length. At just over 90 minutes, it's an aggressively fast-paced movie, but it definitely feels like an extra hour was needed to flesh out this film beyond its rushed story and missed world-building potential. 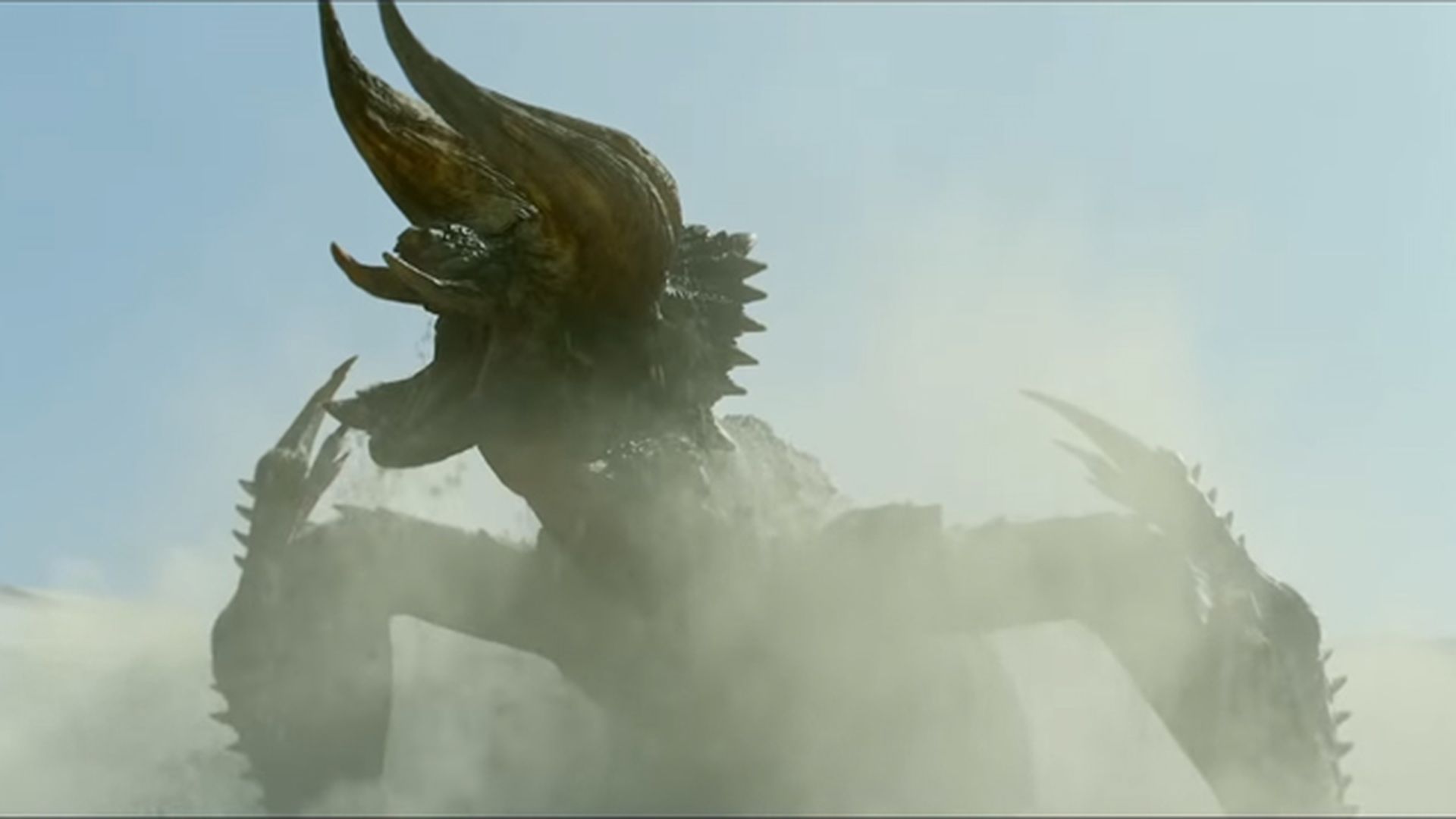 That said, Monster Hunter does have a lot of entertaining moments that do the games justice in some ways. For example, the monster designs and CGI are absolutely superb. In an age where anime or video game source material becomes "Hollywood-ized", it's great to see Anderson and Capcom stick to the original game's iconic monster aesthetics, right down to the exceptional sound design too. Black Diablos and Rathalos, who play big roles in the film, look and sound marvelous. This extends to the weapons, which all look fairly faithful to the games too, though it would've been nice to see more of them. Anderson clearly had a lot of fun directing these action sequences, which reflects in just how absurdly entertaining they are. We've seen Anderson at the top of his game with Event Horizon, and even at his most unhinged with Mortal Kombat, so I'm glad to see the director really embrace the goofiness of the video games in these admittedly fun action scenes. It does give way to some unfortunate shaky-cam, but for the most part, they're really exciting and fans should have fun watching them.

Black Diablos and Rathalos, who play big roles in the film, look and sound marvelous.

Jovovich once again plays a captivating lead female character, and you can tell she's accustomed to it by now after the Resident Evil series. She's perfectly fine as Artemis, but it's her interactions with Tony Jaa's Hunter that really gives the film some emotional depth. There are plenty of neat little character moments between the duo, with Jaa in particular stealing the show. Both characters' banters mostly consist of silent grunts and the odd English word, but their actions more or less carry their chemistry. There's an effort to also give them backstory - Artemis carries around a ring, and it's implied that Hunter has a tragic past related to Rathalos - but the film doesn't do a good job at really exploring their history. As mentioned before, an extra hour would've done these characters a lot more justice as it would've given these backstories room to be fleshed out. 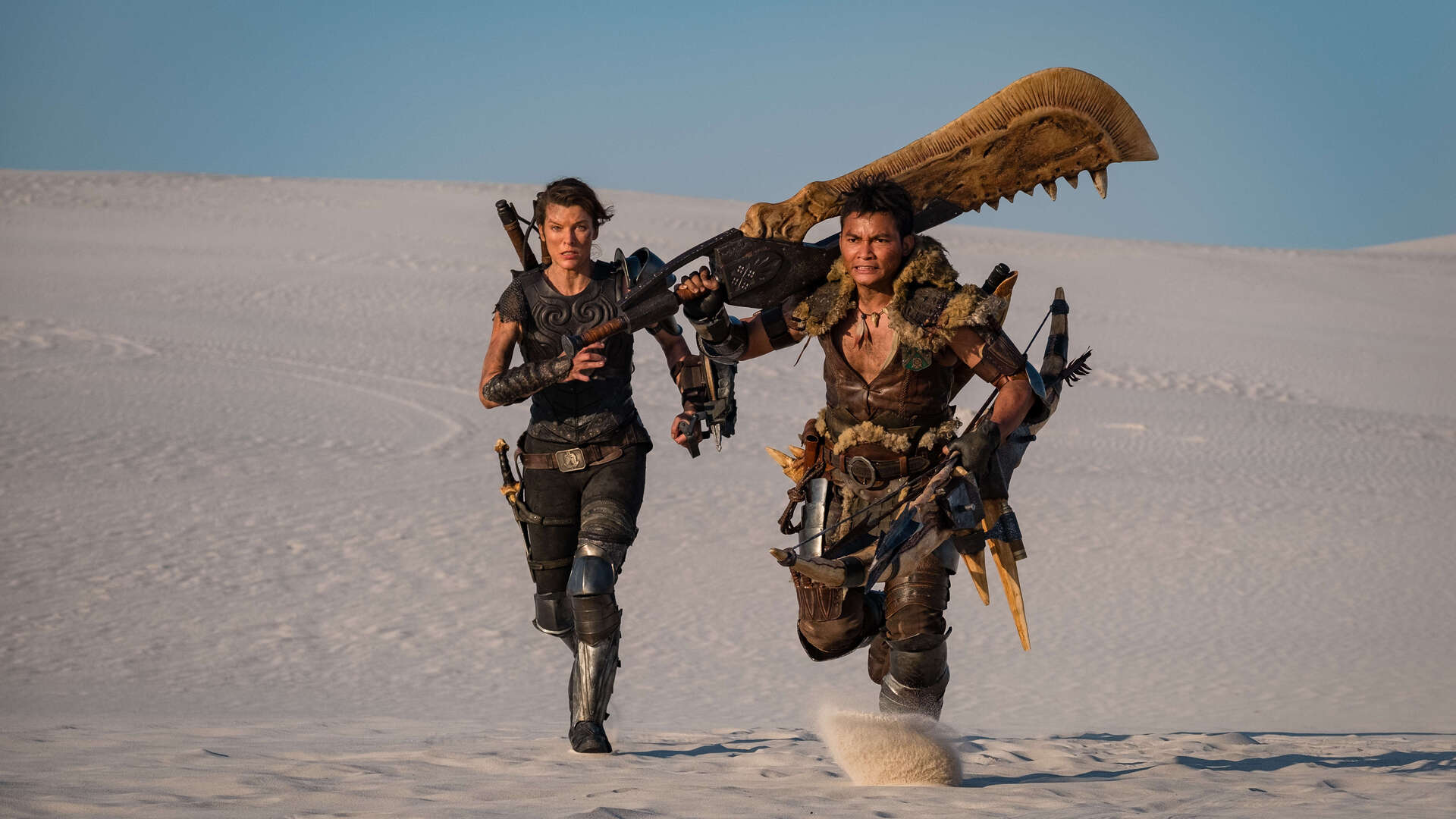 Monster Hunter tries to inject certain characters from World into the mix, like Ron Perlman as the Admiral, and the Palico Chef who has a few good comedic moments, but they show up a bit too late into the film to really make an impact. By the time we're in the final stretch of the third act, we've barely been introduced to the handler, the second handler, the Fiver Bro (because, why not?), or the wider roster of characters lifted straight out of World. They ultimately just boil down to characters appearing in the film for the sake of being there because it's Monster Hunter, and do little to add to the experience overall. Jaa and Jovovich carry most of the characterization in the movie, so it's sad that Perlman is relegated to the exposition dump guy with a goofy wig as opposed to the muscular, admirable Admiral from the games. 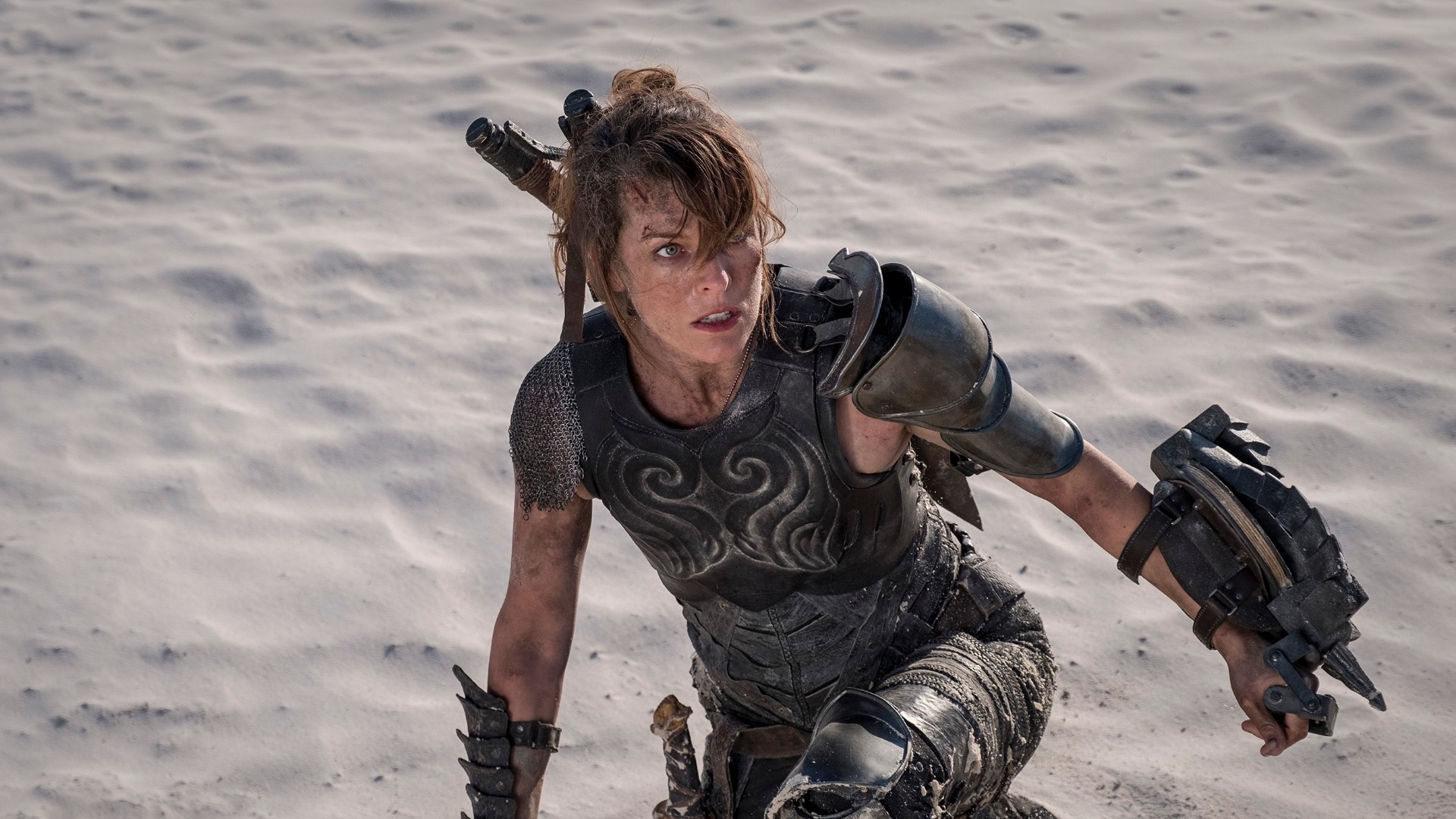 There are glimpses of an attempt to also bring the stunning vistas of World into the film, but they kind of fall flat. What is supposed to be the Wildspire Waste (I'm guessing) looks and feels like just another desert location, while the Ancient Forest doesn't carry any of the majestic grandiose from the game. Considering how immersive and wonderfully realized these locations are in World, it's a bit sad to see the film squander what could've been an equally immersive and wondrous landscape for these characters to inhabit. The film's fast pace and short run time is, yet again, at the core of this issue. 90 minutes is not nearly enough to cover or flesh out the world-building. It should've been an epic two and a half hour film with more even pacing to bring it all to life, but the movie feels like it's just going through the motions. I applaud the attempts at trying to recreate the locations, but it really needed that crucial extra minutes to an hour for a better overall package here. 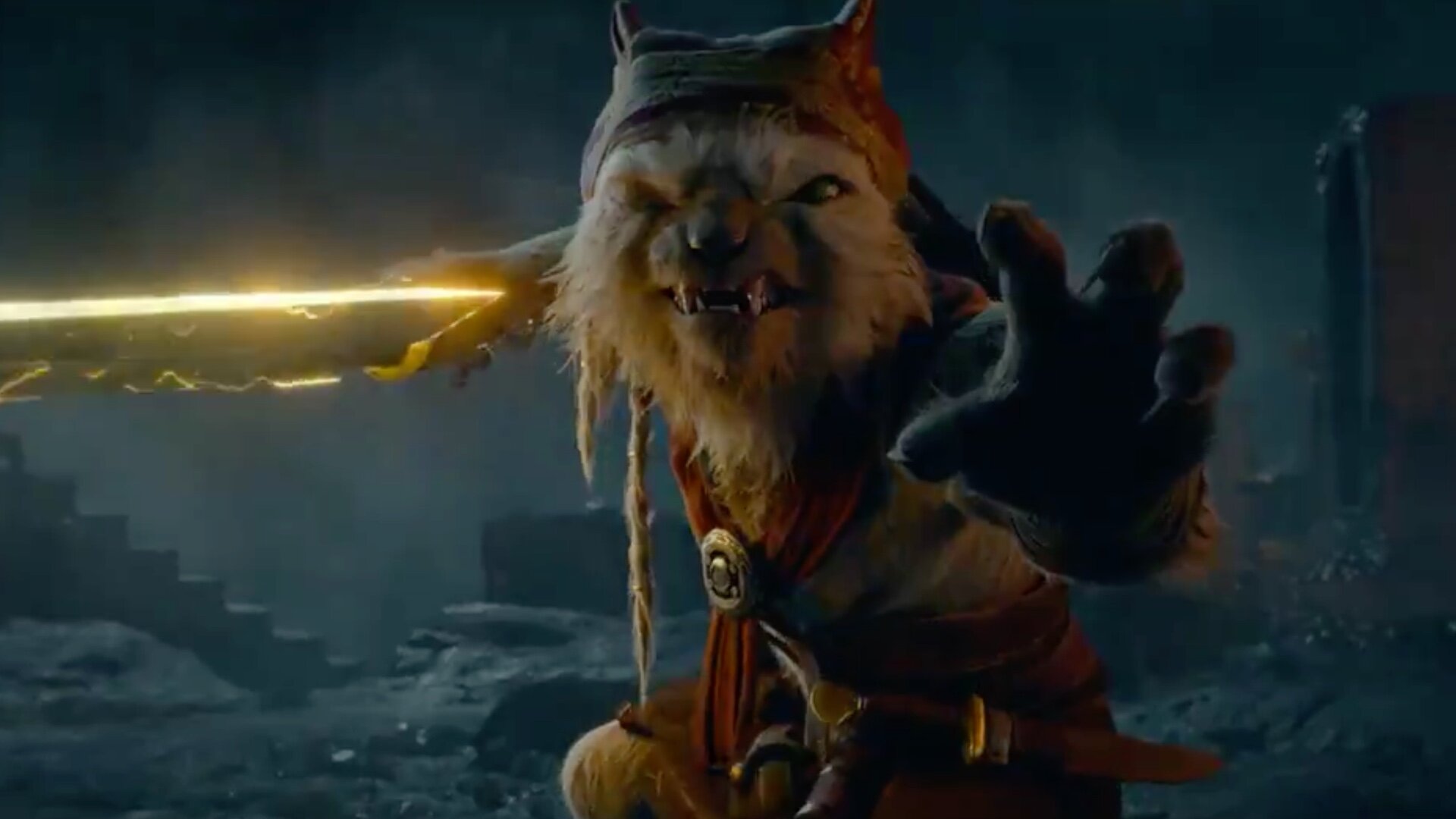 Finally, I have to talk about the ending. To put it bluntly, it's sequel bait. Just as it looks like the film is about to jump into its actual third act and finale, it abruptly ends, setting up more movies to come. Anderson didn't do this to such an egregious effect in the first Resident Evil movie, so it's baffling that Monster Hunter is so sure of itself being a franchise (and success), that it baits viewers with a sequel tease. They might've pulled that franchise trigger too early here, unless Capcom is also sure that World's video game sequel is gonna be a mega-hit too.

Overall, Monster Hunter isn't the worst offender when it comes to video game adaptations. It's clear that this is the most fun Paul W.S. Anderson has had directing a video game movie since Mortal Kombat, and it shows in the entertaining monster action scenes. Milla Jovovich and Tony Jaa are a great pair to watch on-screen, which is a shame that their character building was cut short by a rushed pace and restrictive run time. However, we're now in an age where Detective Pikachu and Sonic The Hedgehog have proven that video game movies can be good to great, so there's no reason for Monster Hunter to feel like such a step back to the 2000s era of video game to movie adaptations. That said, it would mostly fall on the better end of the live-action pool, but the missed potential here is enough to leave me feeling cautious rather than excited for its future.

*Review based on a screener sent by Sony
6

Faithful to the iconic monster designs

Needed to be at least an hour longer

A lot of missed potential