It’s different, but not quite there. 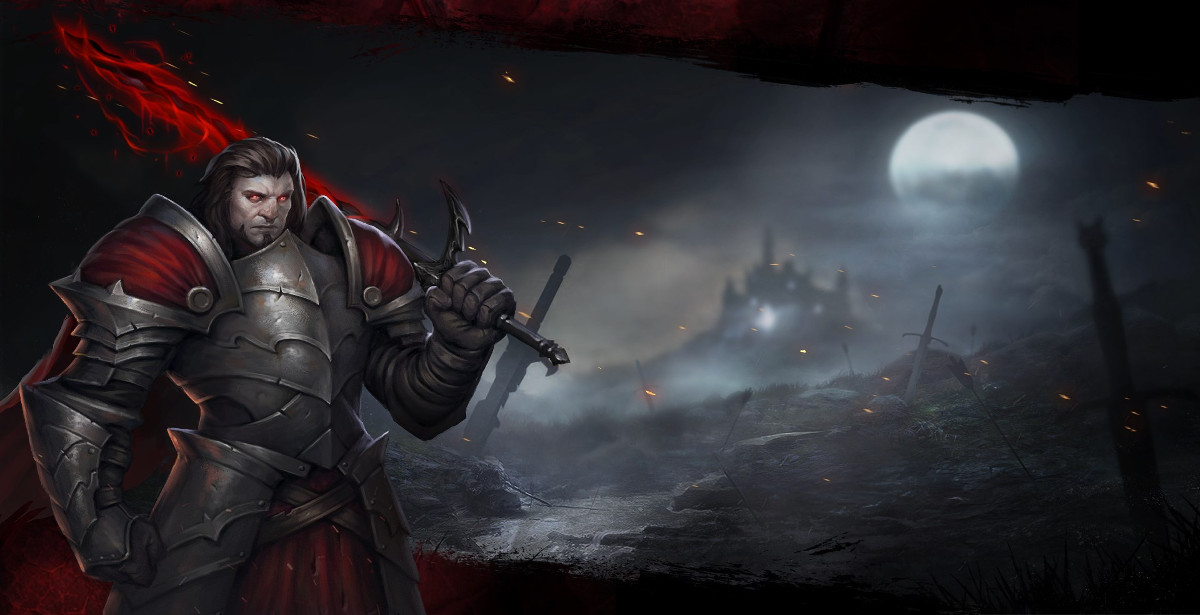 Vampires just never seem to go out of fashion. Even after the derision foisted on the sparkly vamps - and let us be honest, the author and fans of those books don’t give a damn about the derision - vampires are still as popular as ever. A search on Steam brings up what seems like a never-ending list of games and DLC featuring the bloodsuckers in one form or another.

While we all wait for Vampire: The Masquerade - Bloodlines 2, Immortal Realms: Vampire Wars stared at me from my Steam backlog. While not a RPG, it looked like an interesting take on the Total War formula, an overworld that you travelled around looking to expand or consolidate your power and a strategy game when you got into battles. The main difference being that the entire game, overworld and battles is turn based.

Graphically the game is fine. Overworld is atmospheric, but the building models and maps tend to repeat assets. One Library looks like the next and one human cavalry unit looks like another. Even the various enemy Lords tend to repeat designs. This is fine for generic units, every archer unit should look the substantially similar so you can easily identify them in battle, but a change in livery or colour swaps would help break the monotony of the design. 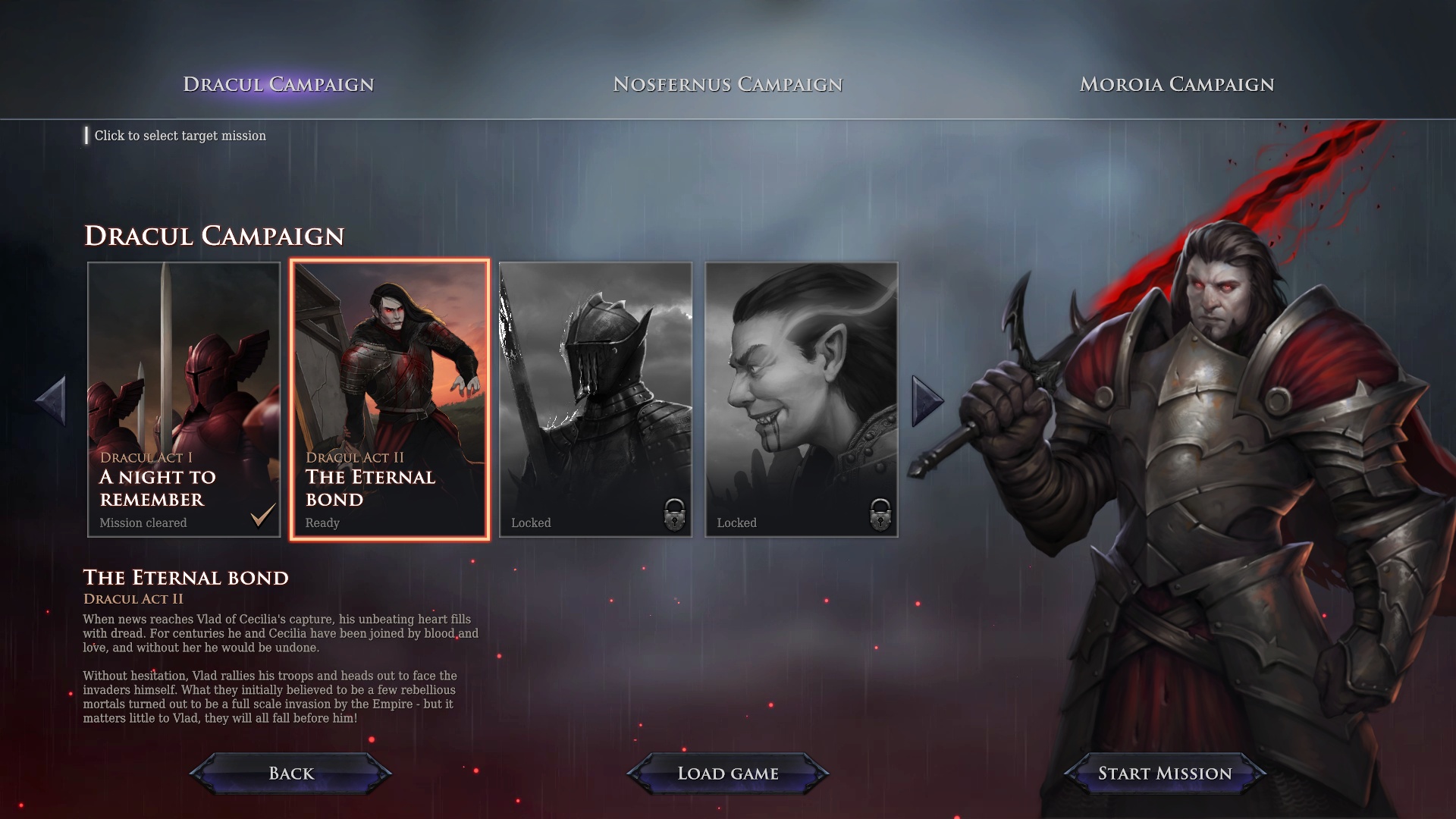 Cutscenes are, for me, the biggest indicator that this game was made on a budget. They are not bad, but they are all in engine, Unity, and the character models look like uprezzed Final Fantasy VII models, all angular. Again, this isn’t a bad thing, it just sets your expectations for the budget.

Where they did spend money was on the VO work. The actors are all excellent adding to the creepy atmosphere and the fact that the game is fully voice acted, although units repeating the same mantra when selected is reminiscent of early ‘90s RTS’, can get annoying. I haven’t seen an option to mute unit acknowledgements, but one in a future update would be welcome.


A Vampire Army Marches on its Blood Supply

The game’s overworld is where you will spend most of the game. You start with a small army, your Lord and maybe three or four units. You must then explore the world by marching into new regions and claiming unclaimed territory. You need to do this in order to discover and claim towns and other buildings so that you can firstly increase blood production, the main currency in this world. If you ever go into negative blood production, your army will lose HP every turn. Blood is also used to buy upgrades to various buildings to access better units and more cards. 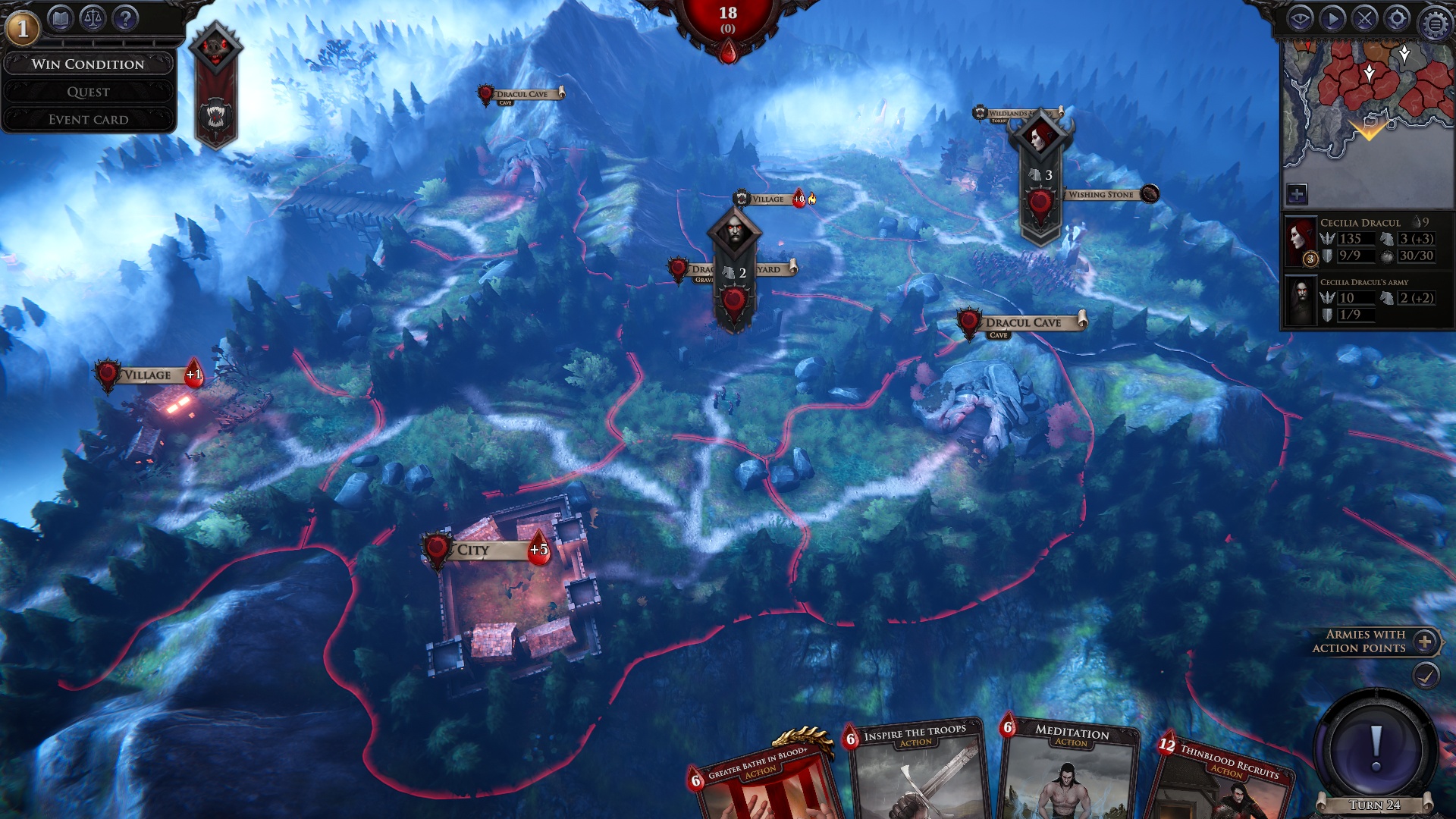 Secondly, the accumulation of cards for use in and out of battle and tech tree points also makes your army stronger. Getting these cards is crucial for your chances of healing between battles when a town or city is not near and for replacing lost units by recruiting at various sites at reduced cost. This card system is what sets the game apart and is not complicated or as painful to understand as some games. Quite simply, each card carries a blood cost in the overworld and if you have enough in your blood pool, you can play a card. The catch is you need to manage the pool as that currency is also used to upgrade buildings and recruit new units to your growing army.

The biggest gripe I have is that there is a secondary tech tree that uses points accumulated over time that gives you various stat benefits and boosts. This tree, when upgraded, can increase your hero unit’s health, unit attack powers or reduce the cost of recruitment. You will spend time upgrading it, but as soon as a level is over and you move to the next, the tree is reset. It's understandable when you switch Lords, but not when playing the same Lord for three of the four levels.

At its heart (heh) Immortal Realms is a strategy game and as such, you command armies and not a single vampire. This goes against the usual vampiric stereotype as an uber predator and along with the overworld management, turns you into something of a bureaucrat managing economies and resources. Sadly, the diplomatic mechanics of similar games are not implemented here, so forging alliances is not part of the game. 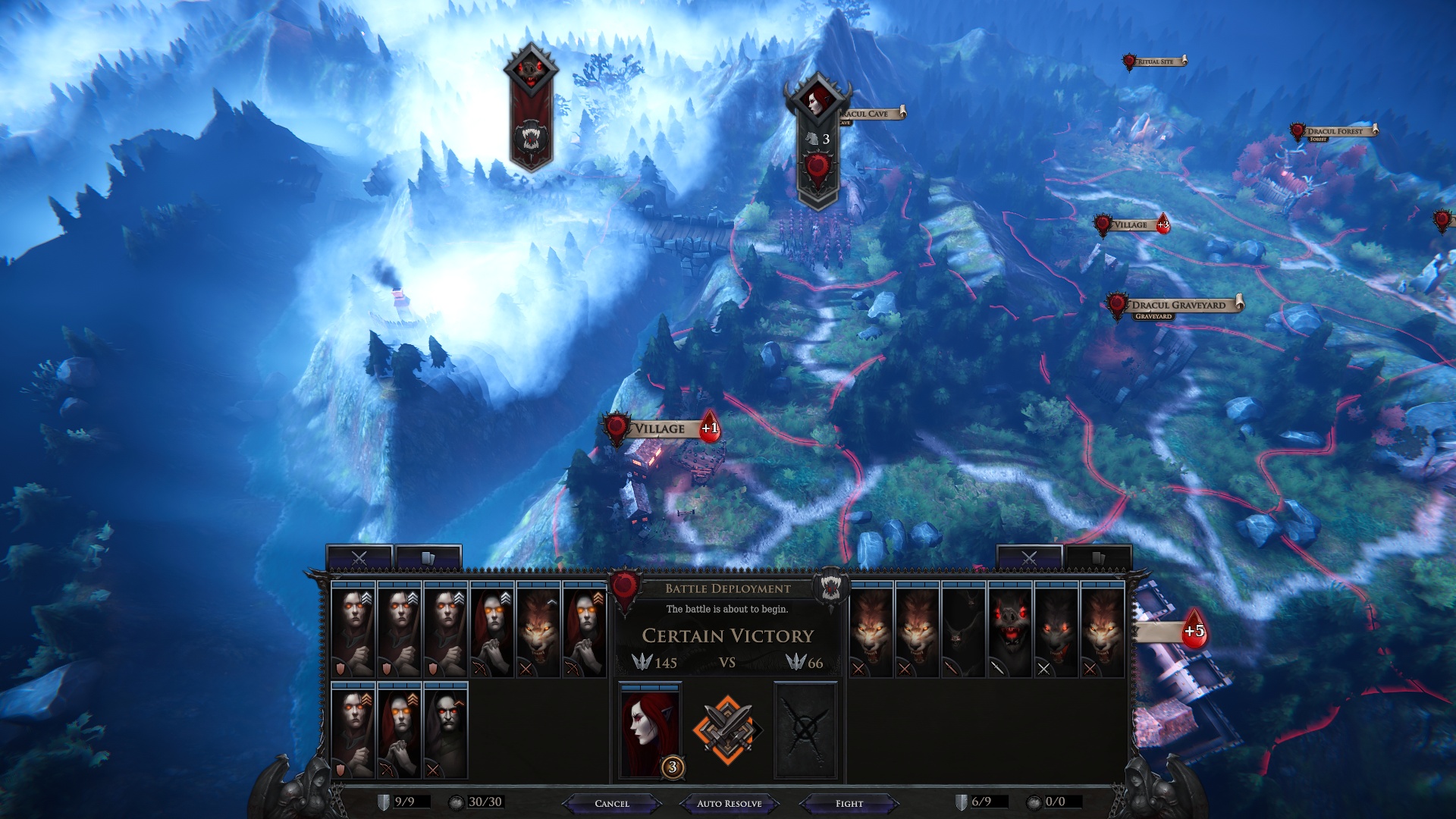 Engaging in combat is a simple affair: find or be found by an opposing army and then engage in battle. If your army is big enough, you can auto-resolve a battle. Unlike Total War, the penalty for auto resolving does not seem to exist as in this game I never seemed to lose a single unit by doing this. Some battles, either due to army size or narrative requirements, forces you to enter battle and I have mixed feelings about this. First off, you get to place units in your preferred formation using the terrain to best suit your tactics.

Unlike Total War, the penalty for auto resolving does not seem to exist...

Secondly, scouting the terrain in this screen will reveal areas that apply buffs to units occupying that tile. Things like ignoring pain or healing tiles are interesting areas to contemplate capturing. However, these tiles are rarely necessary for victory or a detriment to you if the enemy captures them. The AI enemy ignores the tiles and just looks for most convenient paths to get to you. I tend to place my units and then wait for the enemy to approach me; very rarely do I feel the needs to advance to capture these buff areas or a particular chokepoint. 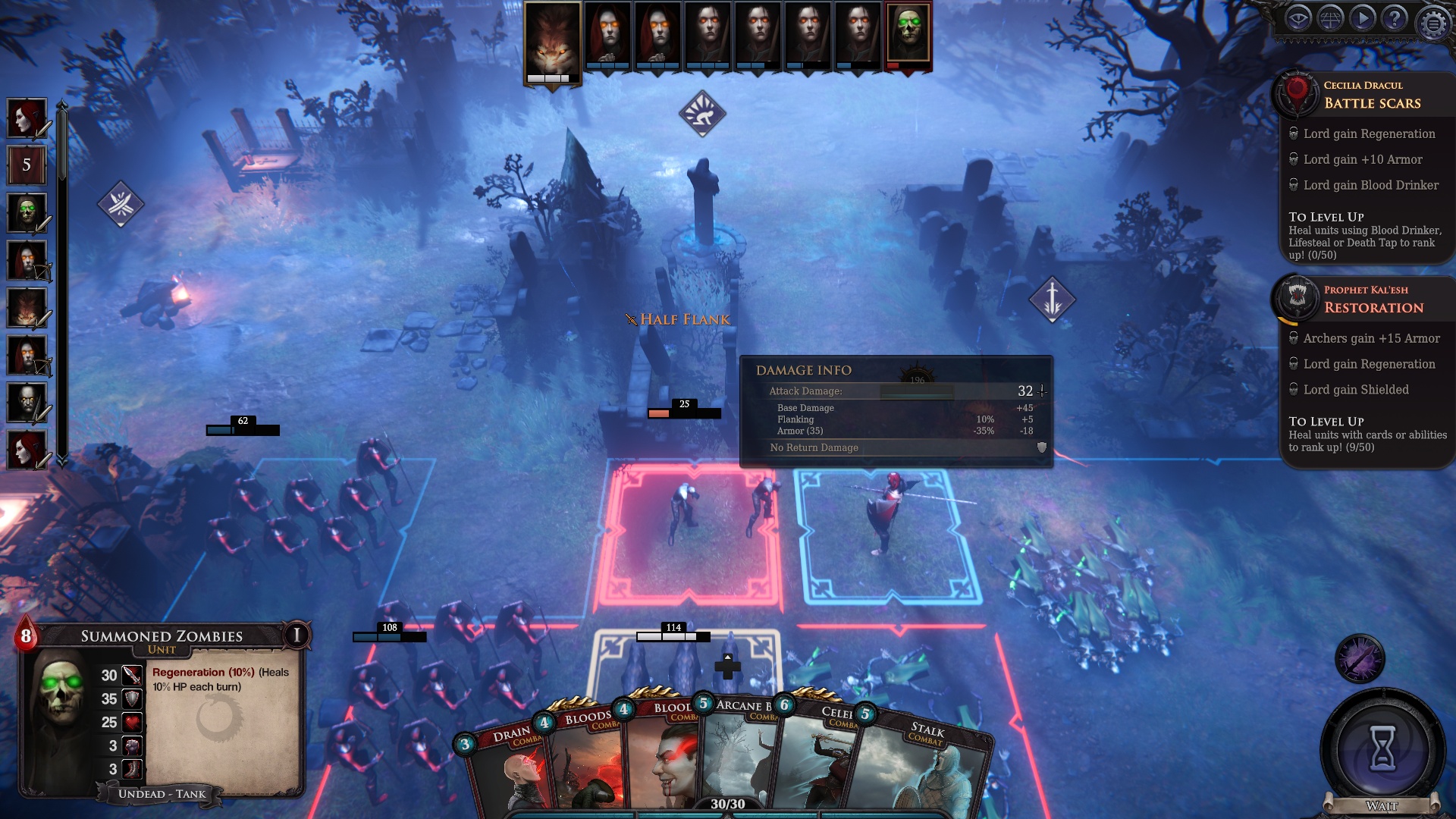 Battles also play out in a turn-based mode allowing you to contemplate your moves without feeling harassed by the sheer number of units you have to keep track of. I find that the enemy tends not to be too strategic, once in awhile the enemy will use two units to flank your units, but most often their Lord rushes into battle and his support units almost come at you one at a time splitting their forces. On one map, I successfully set up a choke point that the enemy queued at to get defeated one at a time instead of sending units down around and attacking my flank.

I find that the enemy tends not to be too strategic... 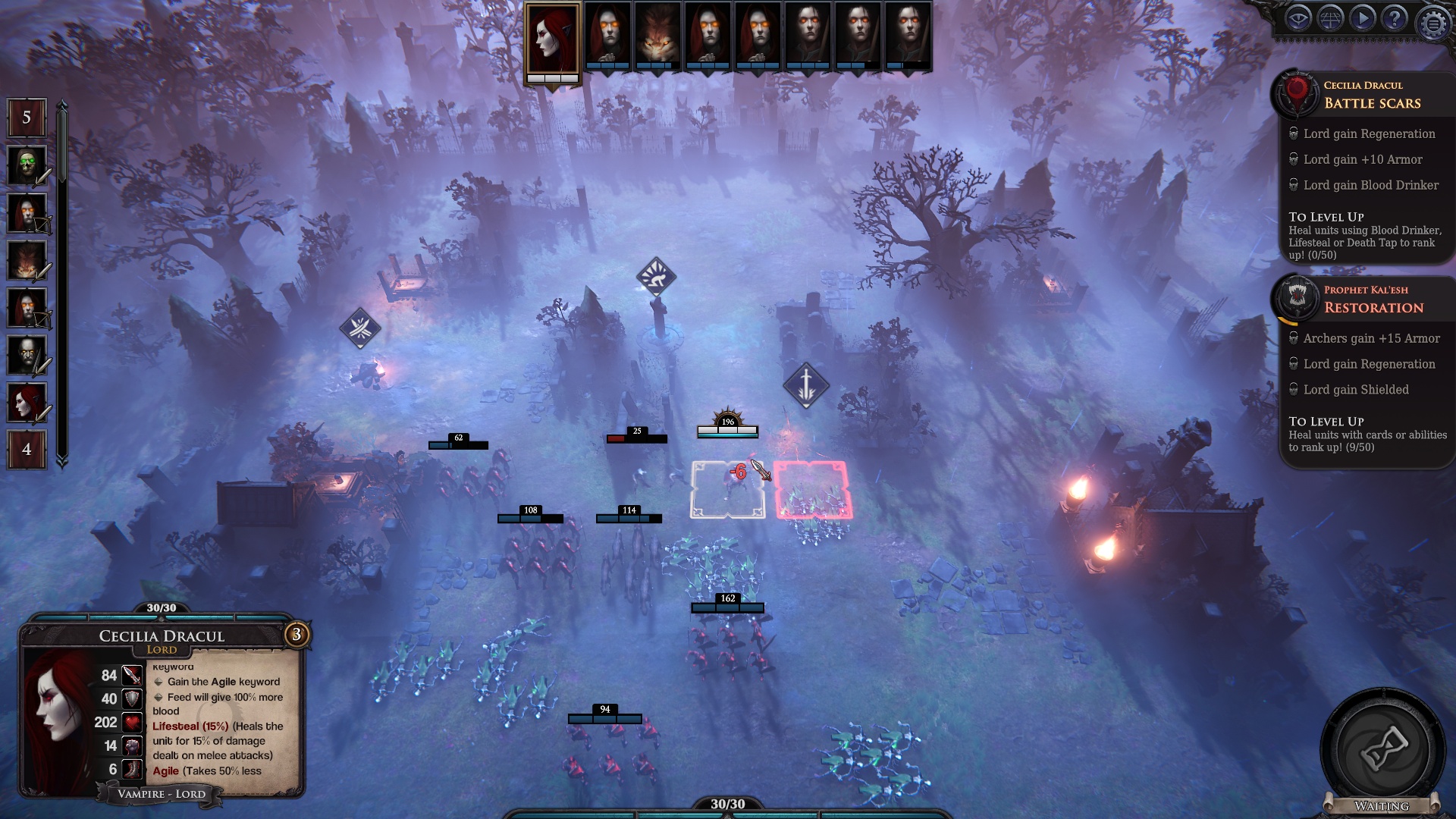 Cards also play a big role in battles as you can increase damage dealt at the cost of some health or shield a unit for a few turns or any other number of buffs and attacks. The cards do not use a turn, but instead use Mana during battle so you must manage that pool, but I never found myself really running out. What can happen is that if by some bad planning you manage to get your Lord killed, you lose the ability to play cards. It’s not a train smash though as you should have enough units aided by less than stellar enemy AI to win the day. You may lose a unit or two, but they can be replaced.

Immortal Realms: Vampire Wars is a decent game that suffers from repetition and poor AI making the game a tad too easy. It is a fun distraction and with 3 campaigns following different vampire clans, it is a long game. Unfortunately, you may get bored by the ease of winning long before you make it through the story and the different campaigns, but it does show promise and it is great to see strategy games make a comeback of sorts to PC and console.

Reviewed on PC. Available on PS4, Xbox One and Switch.
6

A good take on the Total War Formula

Graphically it is average

Battles are too easy

Generic, for the game, model designs