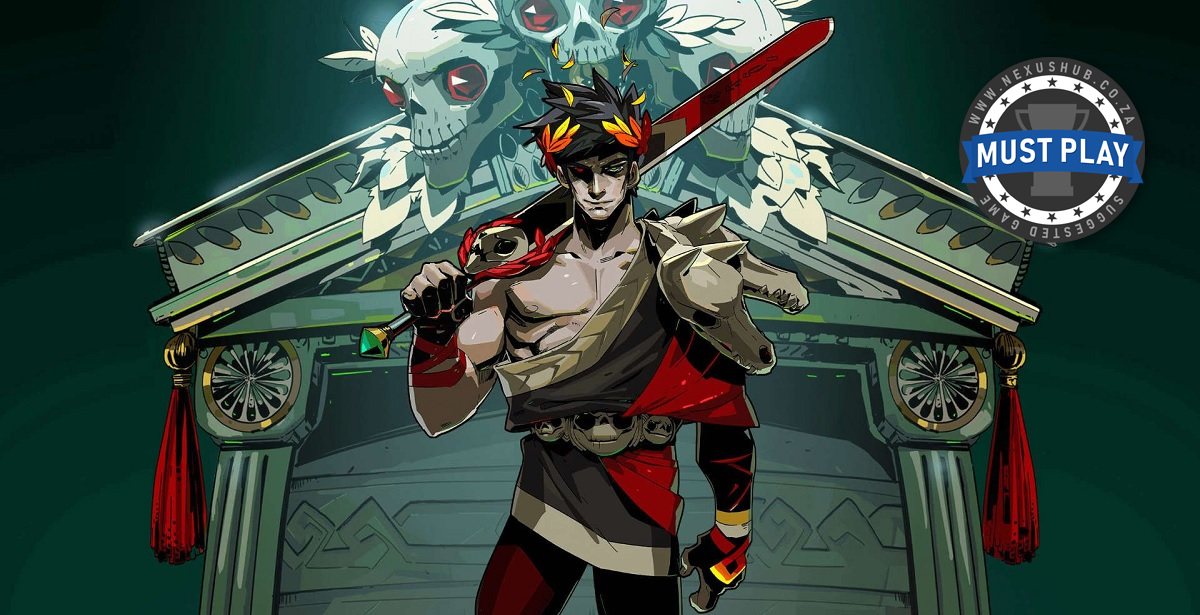 Hades has finally arrived on the Microsoft and PlayStation consoles, optimized for the new hardware (though still available for the old), almost a year after launching on PC and the Nintendo Switch. It received much critical acclaim and for good reason – it’s one of the rare roguelikes that manage to blend a strong narrative component into their repetition-based gameplay loop. 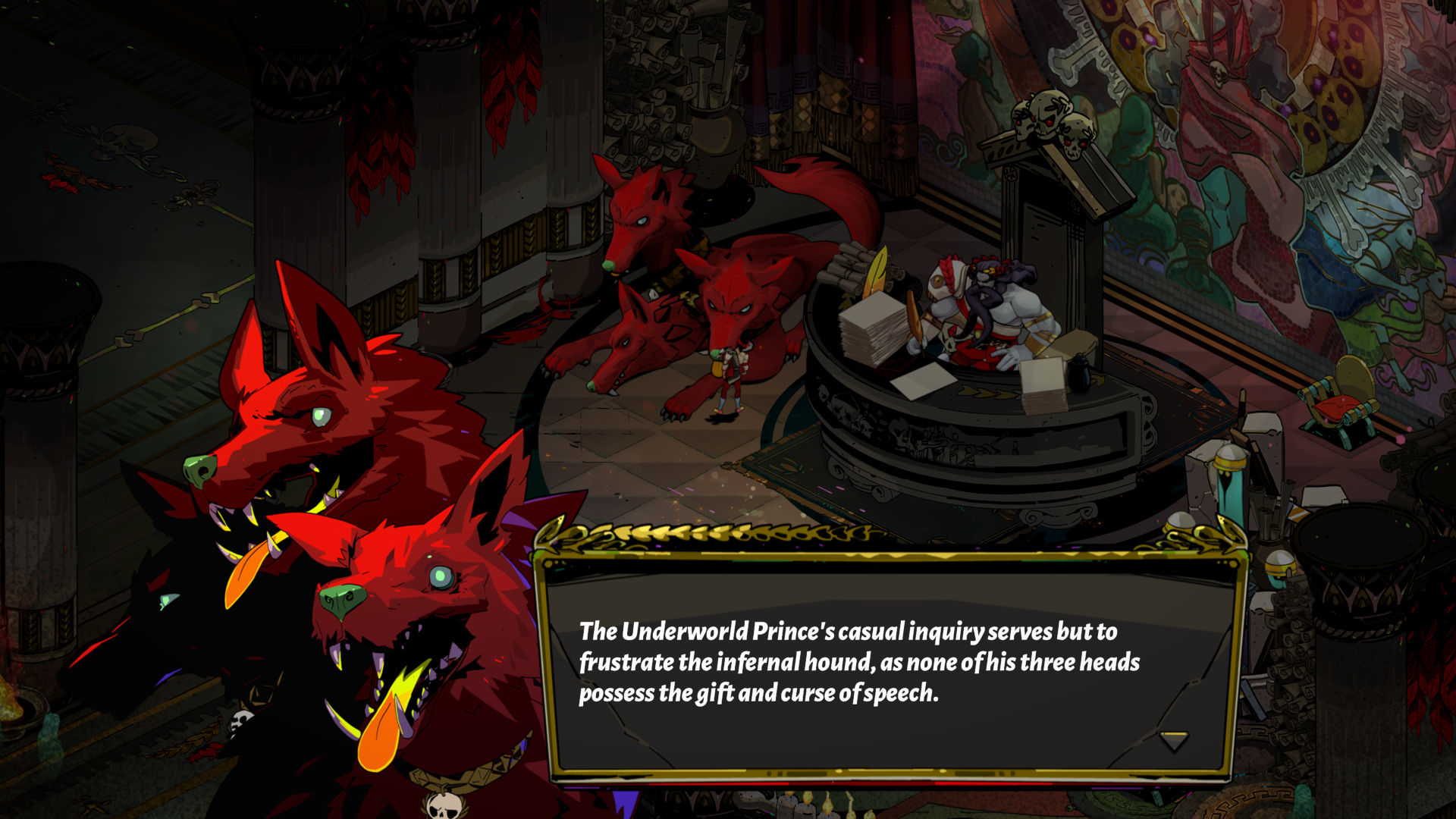 You can, of course, pet the dog.

Hades places you in the boots of Zagreus, the rebellious son of Hades, hellbent on escaping the underworld to join the Olympians above and discover more about his lineage. You’re given little to go on at first, other than his combative relationship with his father but respectful relationships to other denizens of the underworld. Unlike his tempestuous father, Zagreus is surprisingly humble, kind, protective, and appreciates humour, making him an easy character to root for. His ongoing interactions with both those trapped in the underworld and the Olympians are a great hook that’ll keep you pushing forward, even if a run goes badly.

Zagreus is surprisingly humble, kind, protective, and appreciates humour, making him an easy character to root for

Of course, it’s often hard to inject storytelling into randomized environments and the repetitive gameplay loop of roguelikes. As such, a lot of the heavy lifting is done during your return visits to Hades’ palace, which evolves throughout the game as new milestones are reached and key characters come and go. Hades himself is usually on hand to mock Zagreus’ attempts to escape (or become increasingly frustrated as you progress). Cerberus can be petted while Zagreus recounts his anxieties, other characters will discuss your progress or Zagreus’ past, and there are even romance subplots to fulfil. Some of the bosses you defeat will even make an appearance, expressing their frustration at having fallen to Zagreus and threatening him with a tougher battle in the future (or just casually discussing their lives). 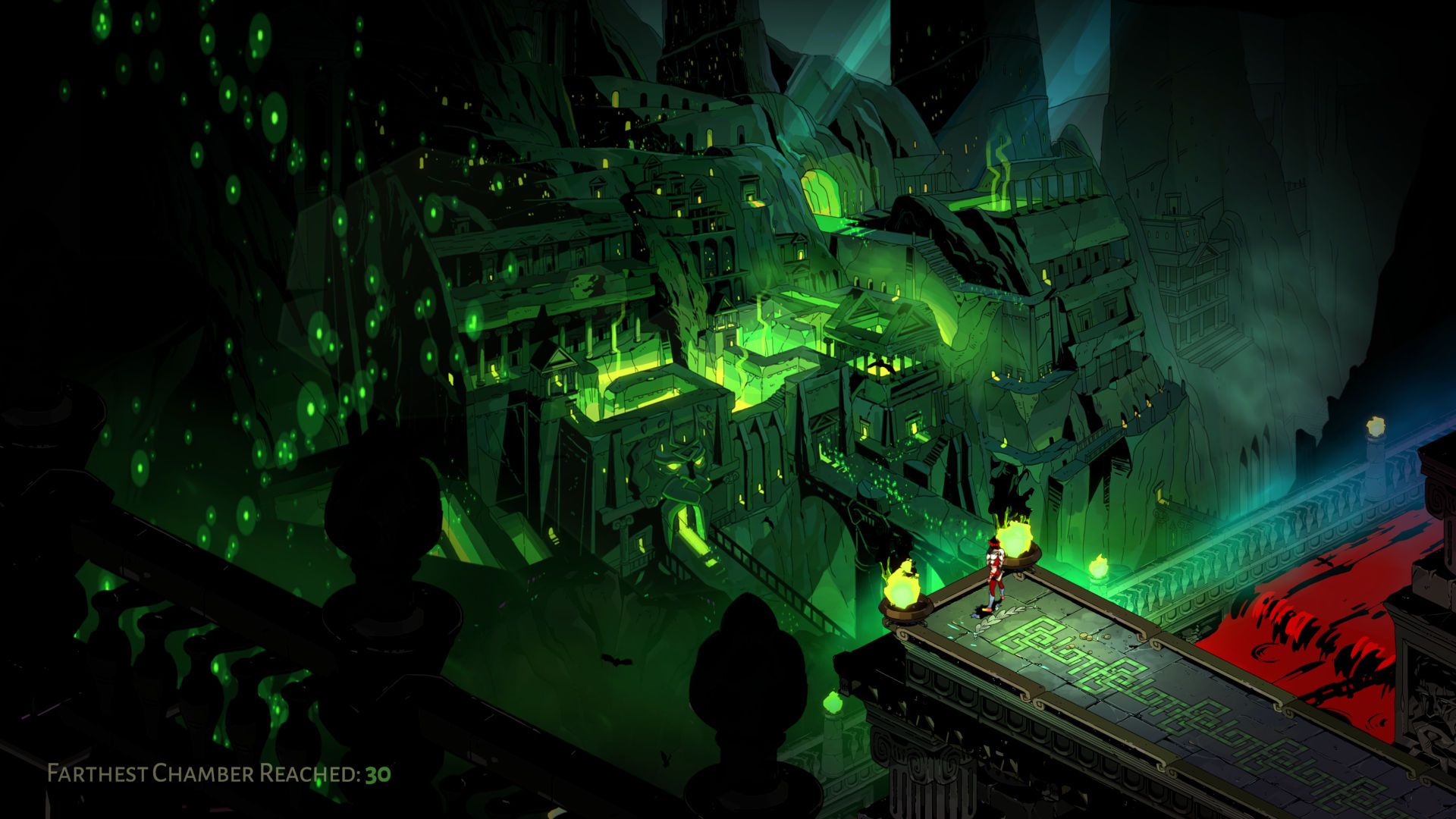 The traps of Elysium were my first major roadblock, 30-something rooms in. It took me several attempts before I switched up my weapon choice and playstyle and managed to make it to the boss(es).

During a run – as you push from Tartarus through Asphodel, Elysium, and the Temple of Styx – unique rooms and several boss encounters will offer up unique conversations that fill you in on Supergiant Games’ interpretation of the Greek pantheon and their family squabbles. The boons you receive from the Olympians – an RNG gameplay mechanics I’ll discuss soon – are often prefaced by a message that highlights their quirky personalities. Unexpectedly, completing a run was only the beginning, and there’s reason to do it another half-dozen times to see the main story to its endpoint. If you keep an eye out for unique interactions and items, there are also several side stories you can complete, even on incomplete runs.

…completing a run was only the beginning, and there’s reason to do it another half-dozen times to see the main story to its endpoint.

Hades offers a story in which no one is evil per se, manages to do an incredible job of tracking conversations and interactions, and ensures you’re hitting frequent narrative beats. Sure, the plot and character motivations become increasingly contrived to justify giving Zagreus an excuse to “escape” again and again, but it makes for a far more satisfying experience when compared to roguelikes that only offer mechanical progression. When you add in the quality writing and voice-work we’ve come to expect from Supergiant Games, it’s a roguelike I’d happily recommend for the narrative if nothing else.

That said, is it the best narrative-driven roguelike? I’d probably argue Children of Morta just edges it with similar family themes, the diverse roster, interconnected upgrade trees, and the finale. That said, the incredible production values in Hades still set it apart. 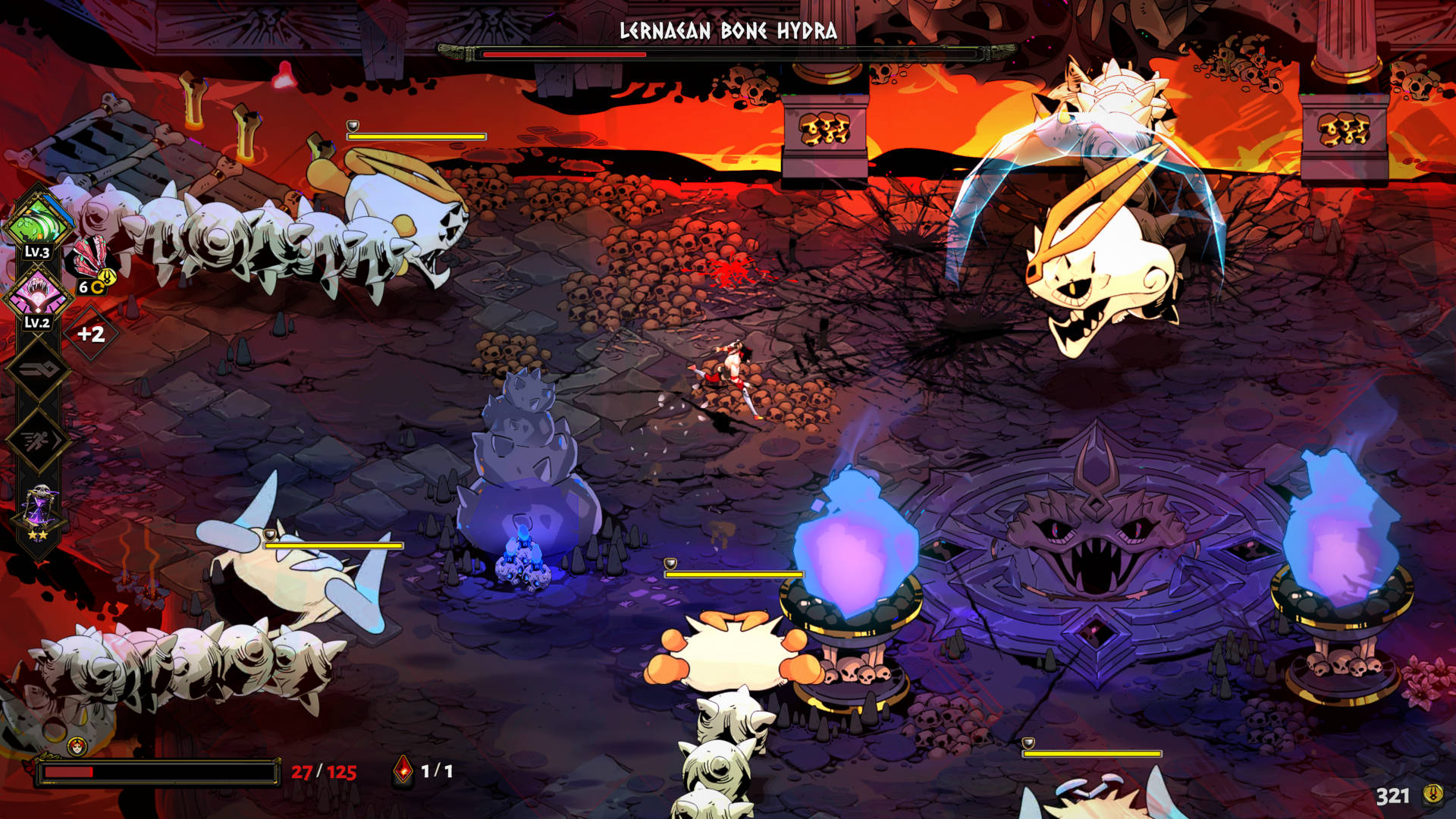 Invest in the Death Defiance skill early (and upgrade it if you’re patient enough). It’ll get you out of all sorts of horrible situations.

Of course, no one wants to repeatedly grind through hell for the narrative if it’s not fun. Thankfully, Hades is a blast to play and has dozens of interconnected systems you might not even realize exist for the first few runs. At its most basic, Hades is an isometric brawler with all the basics present: there’s a light, special, and magical attack, coupled with a dash to get out of trouble. However, that’s only the start. Dashing in, attacking, dodging projectiles and telegraphed attacks, all the basics of combat feel incredibly fluid and responsive. Sure, the difficulty ramps up as you go, but Zagreus still feels powerful from the get-go and there’s no doubt a skilled player can push far with only the basic move-set. Hades is – again – one of those rare roguelikes that, despite relying on a degree of randomness to keep you entertained, ensure you feel like you’re getting better every run.

Hades is a blast to play and has dozens of interconnected systems you might not even realize exist for the first few runs.

But then who wants to use the same weapon and move-set for hours on end? Once you fall, most likely before even reaching the first boss, you’ll end up back at the palace with a few resources in your pockets (and there are many to consider as you progress). To name but a few, “Darkness” allows you to permanently enhance some basic abilities using a magical mirror, “Cthonic Keys” unlock new abilities or weapons, “Nectar” can be given to characters to earn “Keepsakes” (think equippable passive buffs), “Gems” are used to commission new rooms you could encounter during a run, and “Obals” coins allow you to purchase items from Charon. 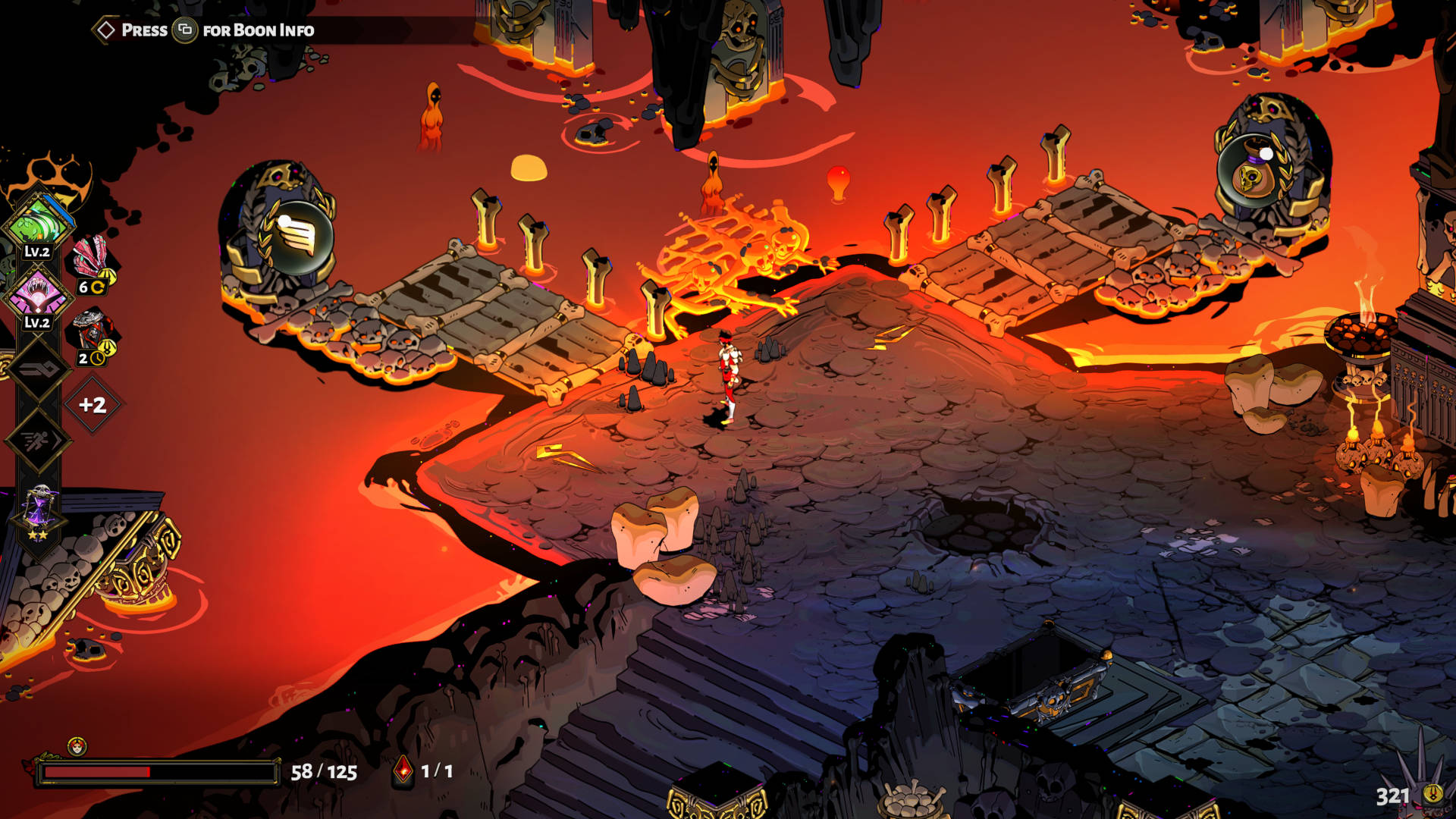 Choices, choices… To see if Hermes will offer a speed increase or get some Obals to spend in Charon’s shop right before the region boss?

Runs are stitched together using several different room layouts and a large enemy pool, many unique to the region you’re in. There are several secondary bosses you might encounter in each region and, of course, an end-region boss (some of the screen-filling variety) that are a constant. These are, initially, difficulty spikes that’ll put your skills to the test in fast, furious, and chaotic battles. That said, while the first few hours – depending on your progress – can feel diverse and unexpected, you’ll soon learn room layouts and learn to counter enemy combinations. However, this all makes sense as you begin to engage with the metagame and focus on fine-tuning a character build that’ll get you through each run faster and faster.

These [bosses] are, initially, difficulty spikes that’ll put your skills to the test in fast, furious, and chaotic battles.

Key to your success is a combination of your chosen weapon – with distinct attacks and combos – and the “boons” you select from the Olympians you encounter along the way. Some pairings are obvious (several were formerly wielded by Olympians aiding you), while others just make sense (think the “Coronacht” bow and Olympian Goddess of the Hunt Artemis). These boons can enhance your attack, special, cast, or dash, allowing you to apply an appropriate effect to those actions. Zeus grants you buffs that discharge lighting, Artemis can boost your critical-hit chance, Hermes increases your mobility and evasion, and the primordial Chaos spices things up by offerings boons that require you to overcome a negative effect before they aid you. 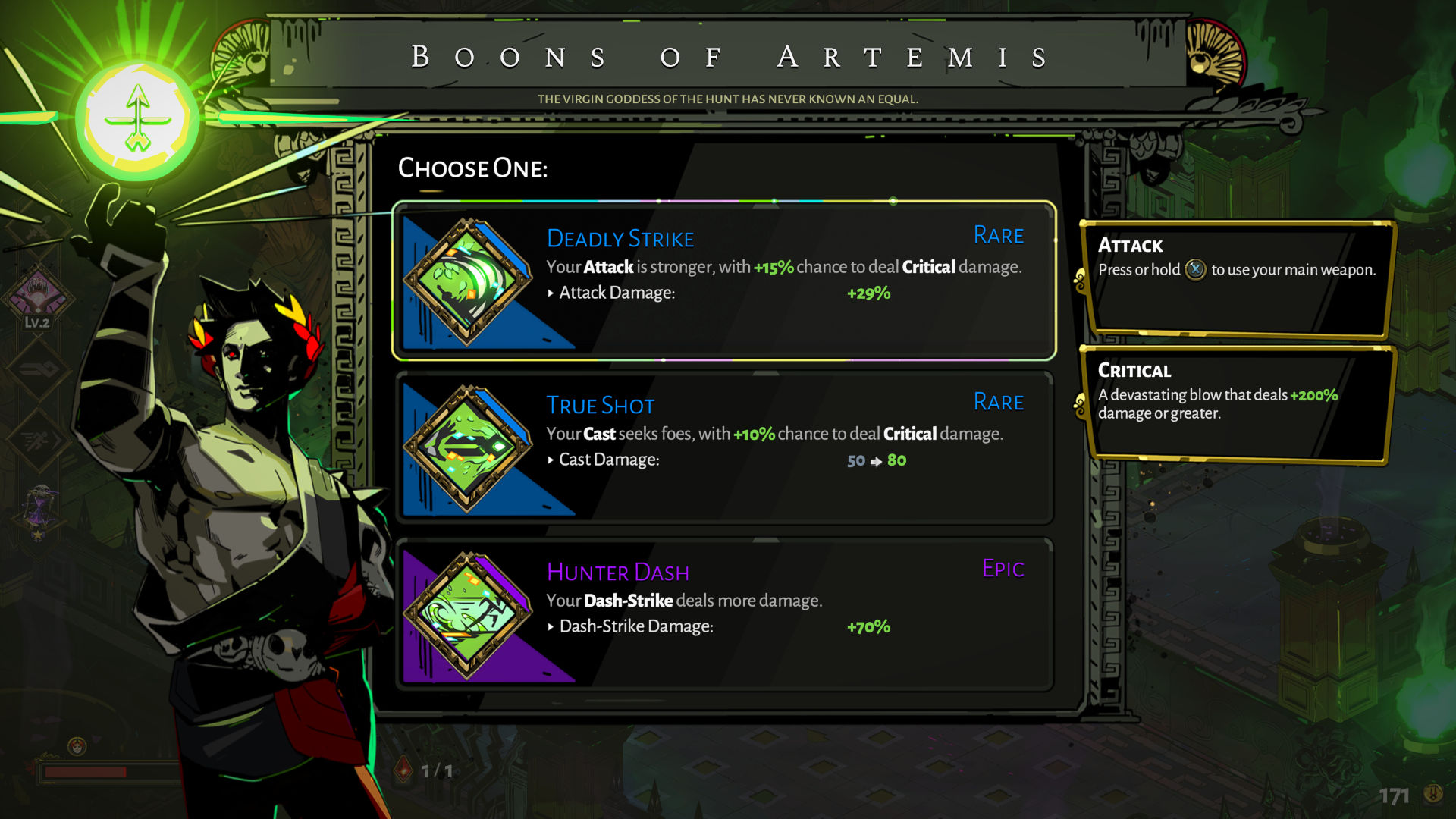 So many boons… but you can only have one attached to each ability. You can, at the end of each region, discard them if you want, but this can leave you vulnerable at the start of the next area.

When you combine weapon-specific combos, the myriad available boons, character upgrades, and equippable passives, there are dozens of potential builds. Almost all of them are viable if they fit your preferred playstyle. Although RNG is a part of the experience, the length of each run – 40 successive rooms and 25-ish minutes (at first) – coupled with the ability to pick room exits that offers specific rewards, allows you to still tailor your build to a degree. Sure, some boons felt OP when I found them (and got me my first successful run), but you’re slowly improving all the time regardless. The narrative component also remains important as every run I’ve done has resulted in a fresh encounter or some new dialogue.

When you combine weapon-specific combos, the myriad available boons, character upgrades, and equippable passives, there are dozens of potential builds.

Now Hades already looked great on PC and Switch, so it should come as no surprise it both looks and runs great on the current-gen hardware, while still looking good on the last-gen consoles. The art direction and striking use of colour make for beautiful environments, distinctive characters, and easily identified enemies. The only issue I found on an Xbox Series S was screen-tearing in select spots when rare transparency effects were present. It must be noted battles can get visually chaotic to the point of distracting. As such, having a sense of where Zagreus is, and where your attacks/dashes will take you, is often more important than trying to track the action on screen. 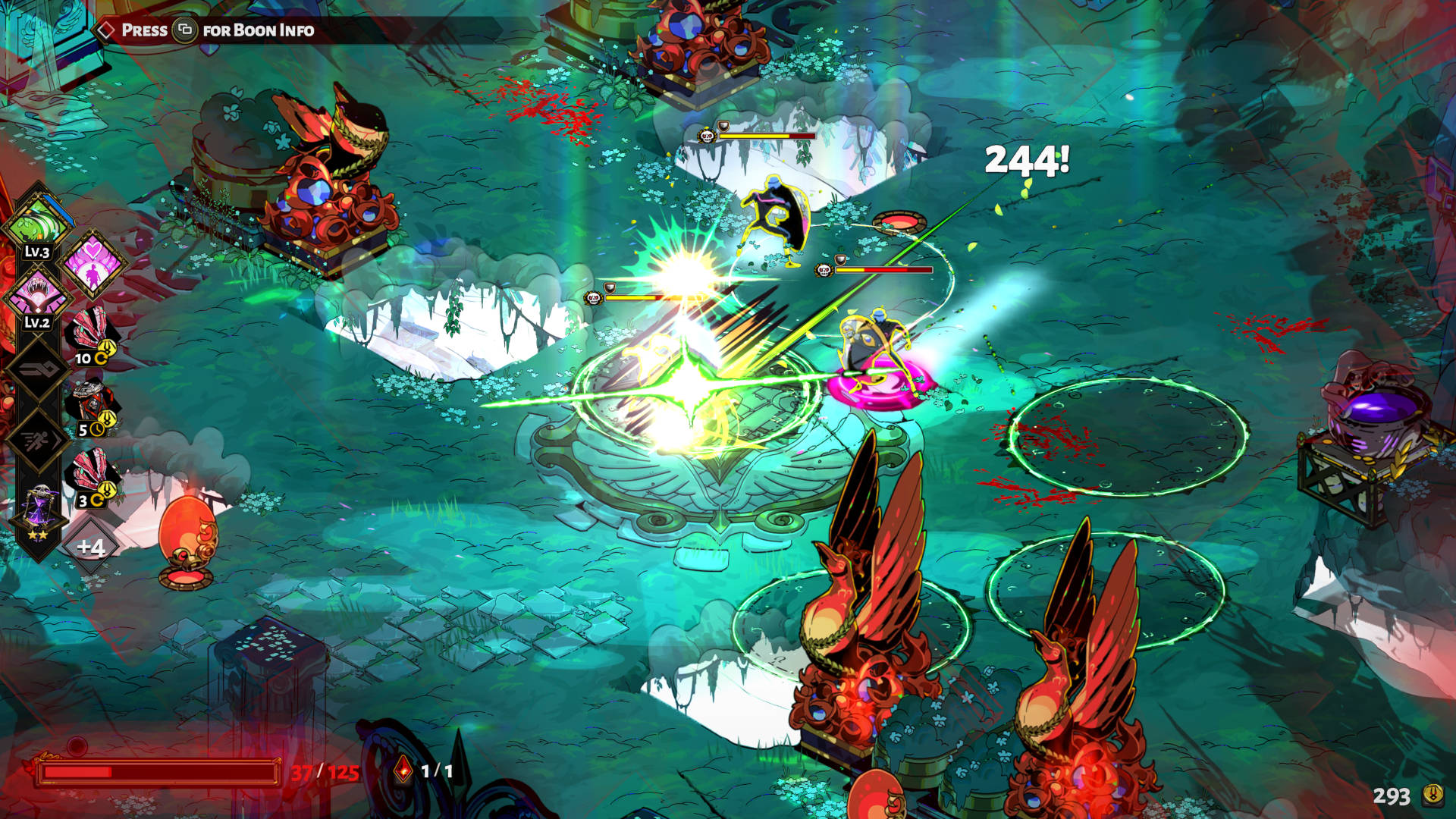 As good as it looks, later regions are packed with enemies, some casting projectile or AoE attacks, and multiple traps. This makes for visually chaotic battles that can be tough to follow.

The sounds of battles, the haunting ambience, and the soundtrack are all excellent and cohesive. When you combine the fluid controls with crisp visuals and the audio mix, it’s easy to zone out as you tackle run after run. The highlight, however, is the quality of the voice acting. Every character is a stylized variant of Olympian myth, with a manner of talking that often perfectly encapsulates their persona. Combined with the quality writing, you’ll never grow bored of engaging in conversation despite the fact it’s taking you out of the action.

Sure, Hades is not quite perfect. If you hate roguelikes, the narrative won't be enough to sway you, and personally, I’m not a huge fan of games that make you wait for waves of enemies to spawn in, but it's damn close. I’ve grown wary of difficult games and roguelikes as I’ve got older, but Hades manages to ensure you feel like you’re always making progress, be that narratively or mechanically. Every run is an opportunity to try a new build, and each run is brisk enough that you’ll be back if it doesn’t work out. The intriguing narrative, fluid action, responsive controls, and phenomenal presentation all come together to create Supergiant Games’ finest to date.

The masterful integration of a strong narrative within a roguelike structure