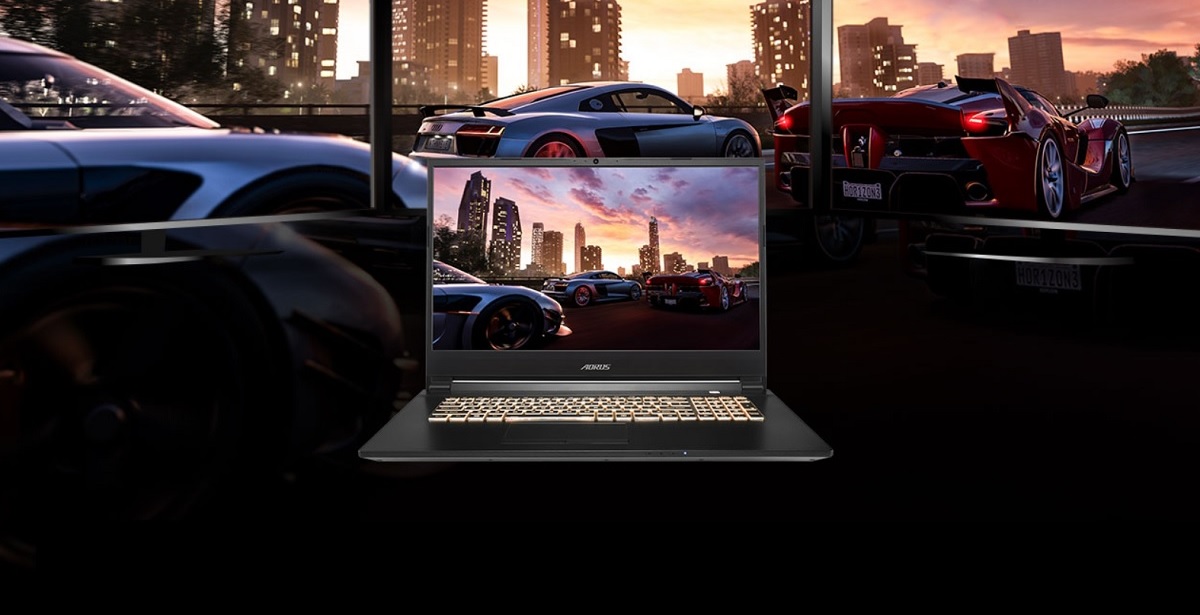 Gigabyte’s Aorus 7 laptop is easily one of 2020’s most affordable all-rounder laptops. The laptop looks pretty unassuming and doesn’t scream “Gaming” at the top of its lungs with its design but this is not necessarily a bad thing. So what exactly makes it great ?

Let’s get into the specs first before continuing any further.

Packing an 10th Generation Intel Core i7-10750H Processor along with an NVIDIA GeForce RTX 2060 GDDR6 6GB and 16GB of DDR4 2666MHz ram, the Aorus 7 is no slouch. It’s effectively the 2020 refresh of the older model notebook it shares a name with and one that’s well worth looking into. The newer processor and graphics card are a step up over the previous generation of the laptop which featured an Intel i7‑9750H and NVIDIA GTX 1660 Ti. 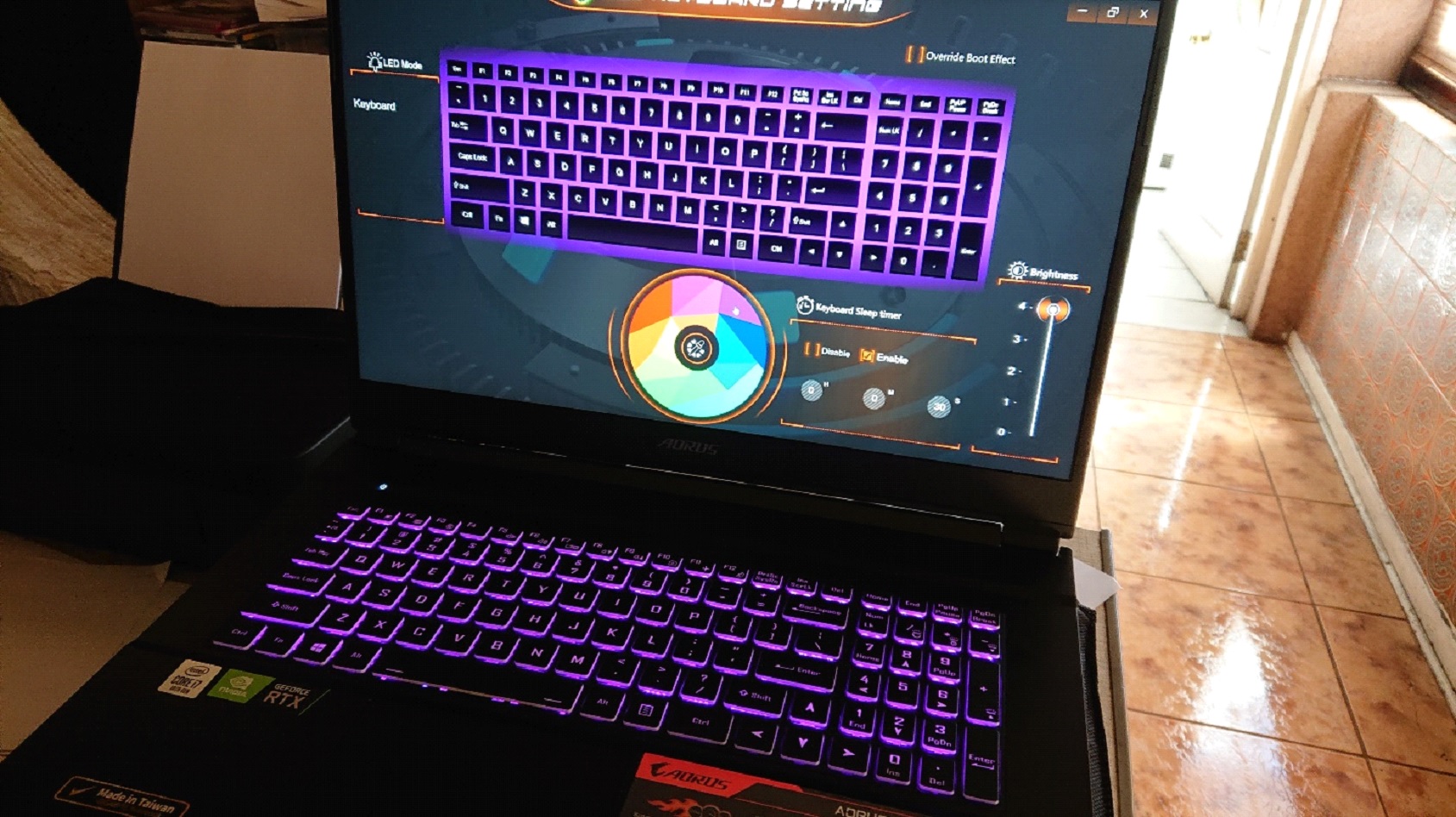 The newer processor isn’t exactly massively different to the previous one but the graphics card makes a world of difference. This world of difference of course being related to ray-tracing in video games which support it. We played a non-ray tracing game first to check out the Notebook’s performance. In Frostpunk’s latest DLC, “On The Edge”, with all settings maxed out, the Aorus 7 delivered a steady framerate around the 80fps mark with the occasional dip to around 40fps when things got really intense in-game.

This world of difference of course being related to ray-tracing in video games which support it.

In a ray-tracing enabled game like Control with all settings maxed out, the Aorus 7 delivered 30 fps which is remarkably good. This however was not stable and as soon as you fight enemies and the effects ramp up, it dipped to barely playable levels in the low teens. Of course, disabling all the ray-tracing options instantly bumped the framerate up quite significantly to 70fps so it’s up to you if you want to play with a setting like this enabled or not.

Running the Cinebench R20 benchmark with the Aorus 7 plugged in and set to performance mode delivered a score of 2804 points which is quite significantly higher than scores obtained from benchmarking the previous generation i7-9750H. 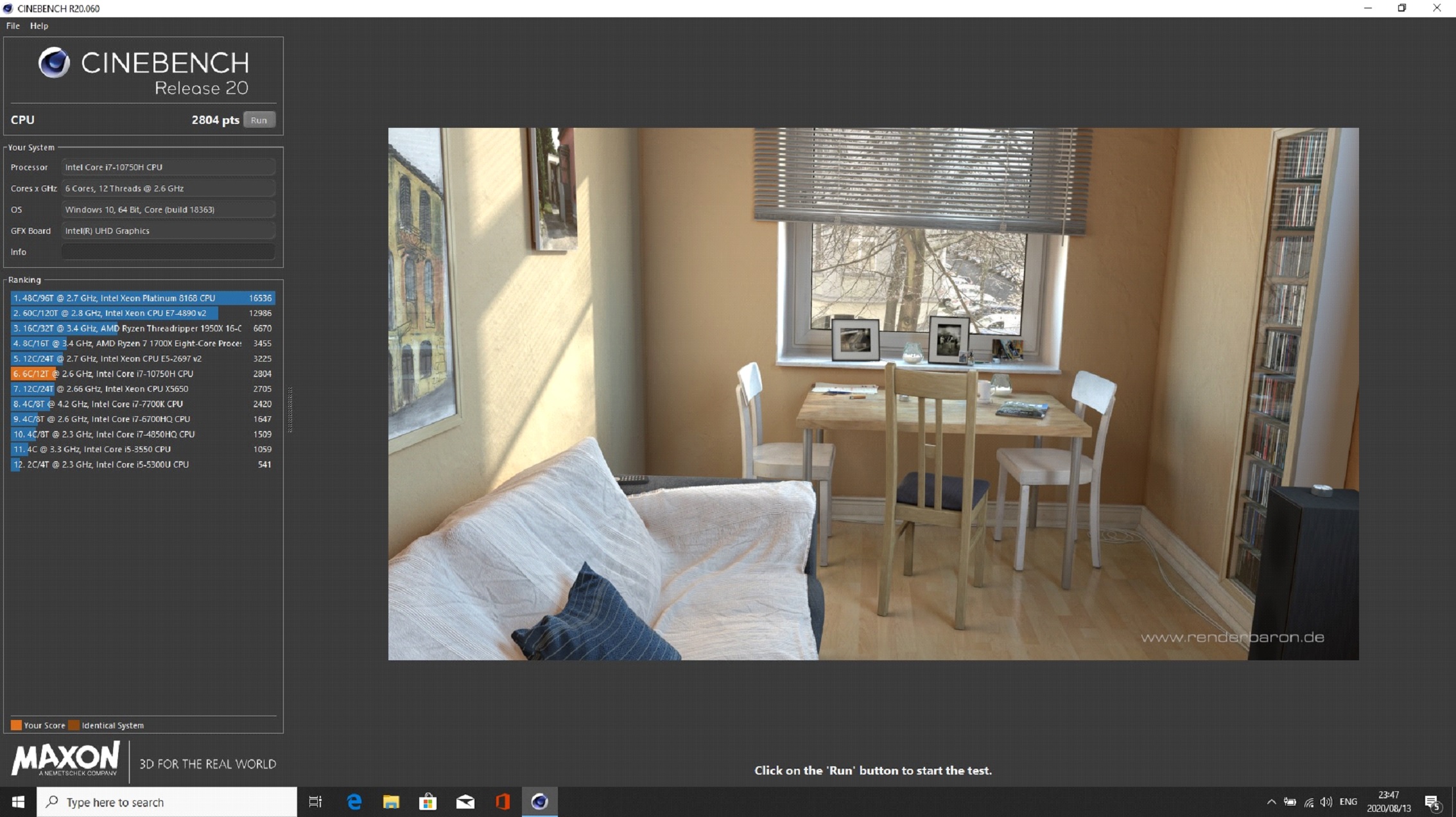 Running the same benchmark with the laptop unplugged but still set to performance mode drastically lowered the score obtained. 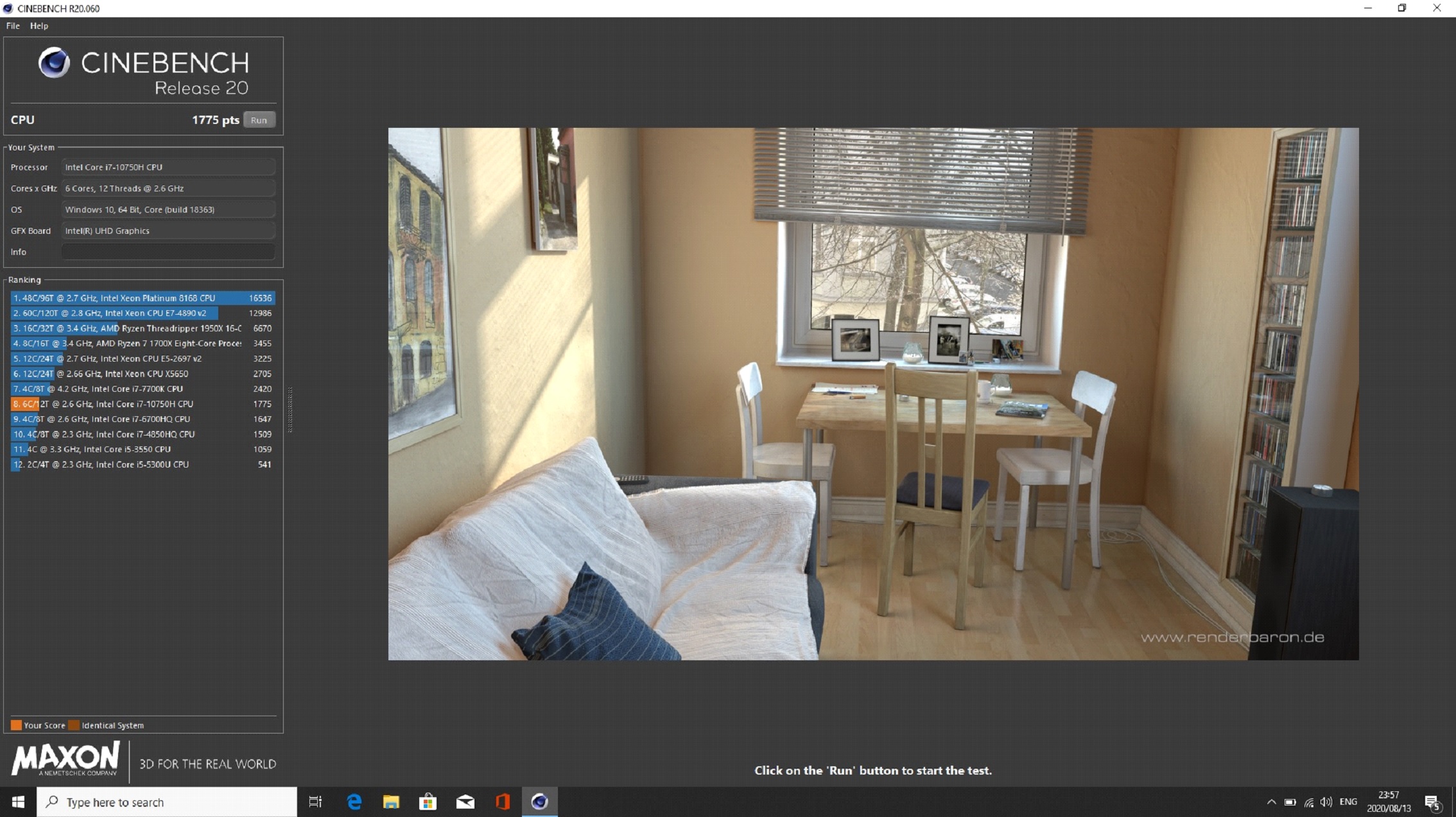 For those that are not as tech savvy and would like to make sense of the above, what this means is that when the laptop is unplugged, it runs at a lower performance threshold. Plug it in and that’s when it shows its true power. Considering that one of the Aorus 7’s key features is its 1 + 3 display compatibility via the numerous video outputs it has, users could easily make this laptop their primary device. For example, you could use the laptop for work or university, come back home, plug it into a power source and connect your monitors and enjoy gaming without much hassle.

The battery life on the Aorus 7 is pretty decent, providing around 6-8 hours of juice depending on your settings and what applications you're running. Notably though, you can swap out the battery quite easily since it's removable. This adds some longevity to the laptop especially when a year or two down the line, the battery might start to lose its ability to hold charge. If you're gaming on battery power and not while plugged in, the first question to ask yourself is... Why? And secondly, you should note that this will drain the battery in no time flat. We played Frostpunk for just under an hour before needing to plug the laptop in.

...when the laptop is unplugged, it runs at a lower performance threshold. Plug it in and that’s when it shows its true power.

The Aorus 7 comes pre-loaded with Aorus Gaming Centre software installed. This software lets you easily change power modes, control the LED lighting of the keyboard, change the fan speed and use “flexikey” to create macros or change what certain keys do when pressed. The keyboard of the laptop is backlit with LED lighting that’s quite bright even during daytime. There’s 4 brightness levels and you can switch off the lighting if you want. Strangely though, the keyboard only features 15 different colours and you cannot set an RGB cycle or any other custom lighting effects. 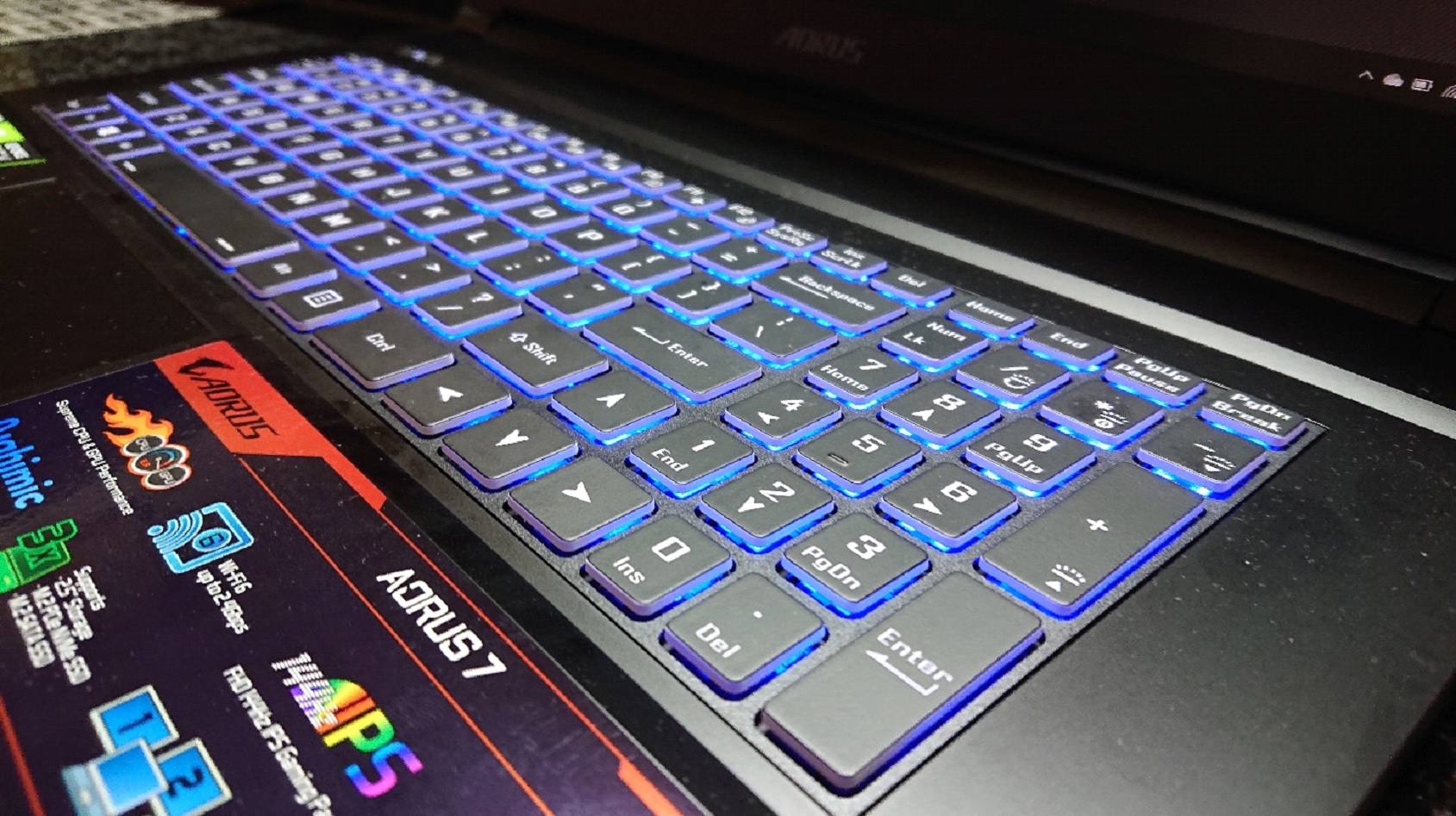 Typing on the Aorus 7 felt great. The keys have a shallow travel distance but they feel really enjoyable to type on. Tastes may vary though and some people may want to use a crunchier external mechanical keyboard with the laptop when at home. The laptop’s trackpad feels smooth to use and has two distinct mouse buttons cut into it at the bottom. The mouse buttons feel “soft” when pressing them and this could take some getting used to. The overall build quality of the laptop feels sturdy but we wish that the top surface was metal and not plastic. The plastic surface is a dust and fingerprint magnet as evidenced by the below image but it’s nothing that a quick wipe down can’t fix. Although we doubt that metal surface would be any different in this regard. 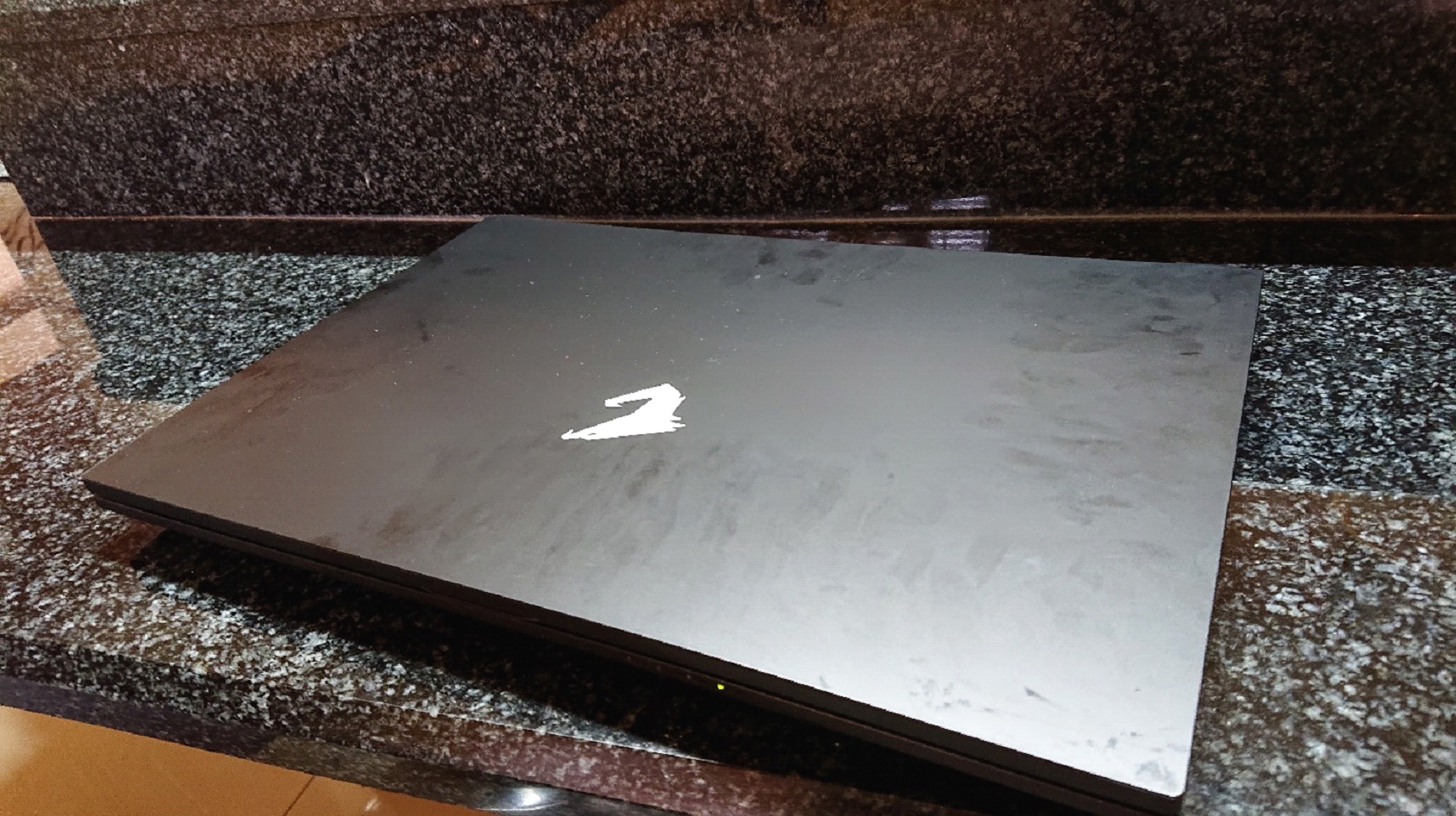 The Aorus 7 has a 144hz IPS panel display and this makes both gaming and working on it an enjoyable experience. The IPS Panel’s colour reproduction is notable at 72% of the NTSC colour gamut and while creative professionals may scoff at this, for everyday usage and for gamers, this is perfectly acceptable. If you choose to play competitive games on this laptop, the combination of the CPU, GPU, RAM and the 144hz panel means that you’ll have a great time. Games like Counter Strike: Global Offensive benefit from the higher refresh rate and this will be welcomed by competitive gamers. 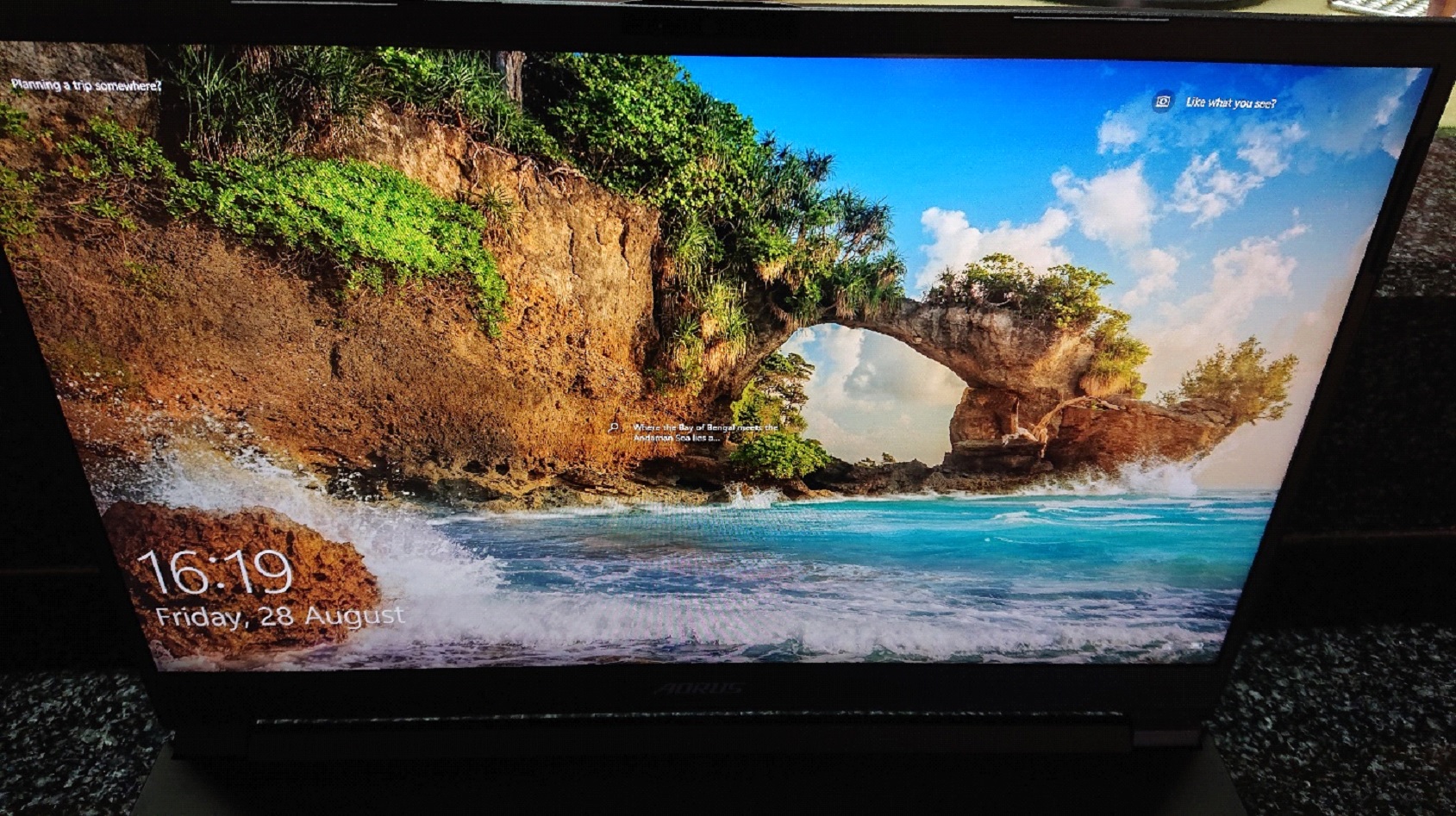 We tried out A Total War Saga: Troy, SEGA’s latest entry in the Total War franchise, and the Aorus 7 ran it with no qualms about it. We ran the built in battle benchmark with everything set to ultra and obtained the following score: 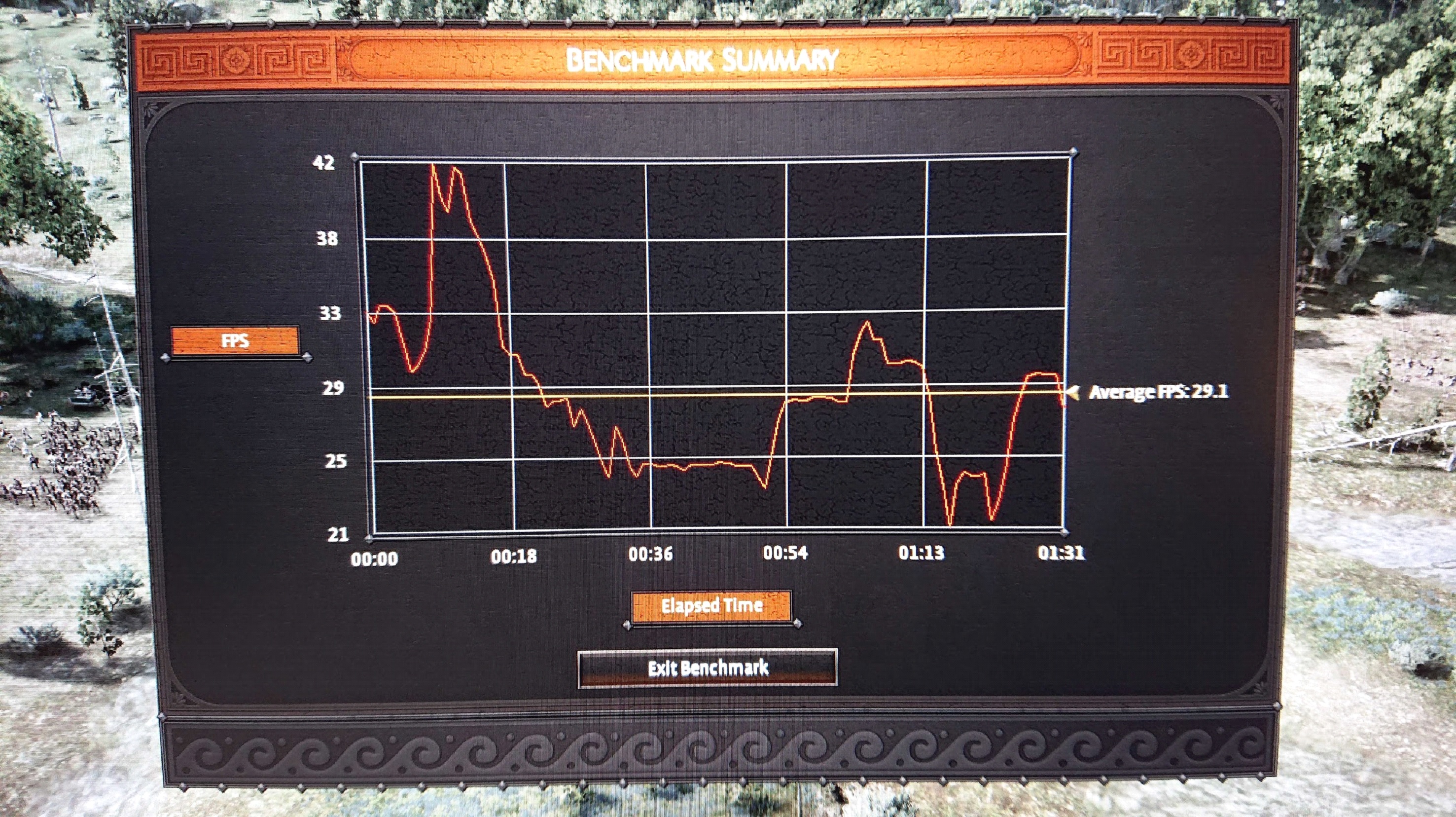 Obviously this is a scenario which most gamers won’t really encounter as they would want to tweak the settings for the best possible performance. Lowering anti-aliasing and other effects will lead to far better framerates but it’s notable that the laptop didn’t really struggle with a brand new game that’s quite graphically intense.

The Aorus 7’s light weight at around 2.5kg, large 17.3 inch screen in a smaller more compact 15.5 inch body and stellar performance makes it quite a great option for gamers who want an all-rounded laptop. It currently retails for around $1599 and while that may seem steep, considering what you’re getting in the laptop, it’s well positioned to dominate the mid-range market. Overall, we highly recommend giving the Aorus 7 a chance if you’re in the market for a new gaming laptop right now.
9

Keyboard and trackpad might not be to everyone’s tastes