Oh what fun it is to ride in a four-wolf open sleigh... 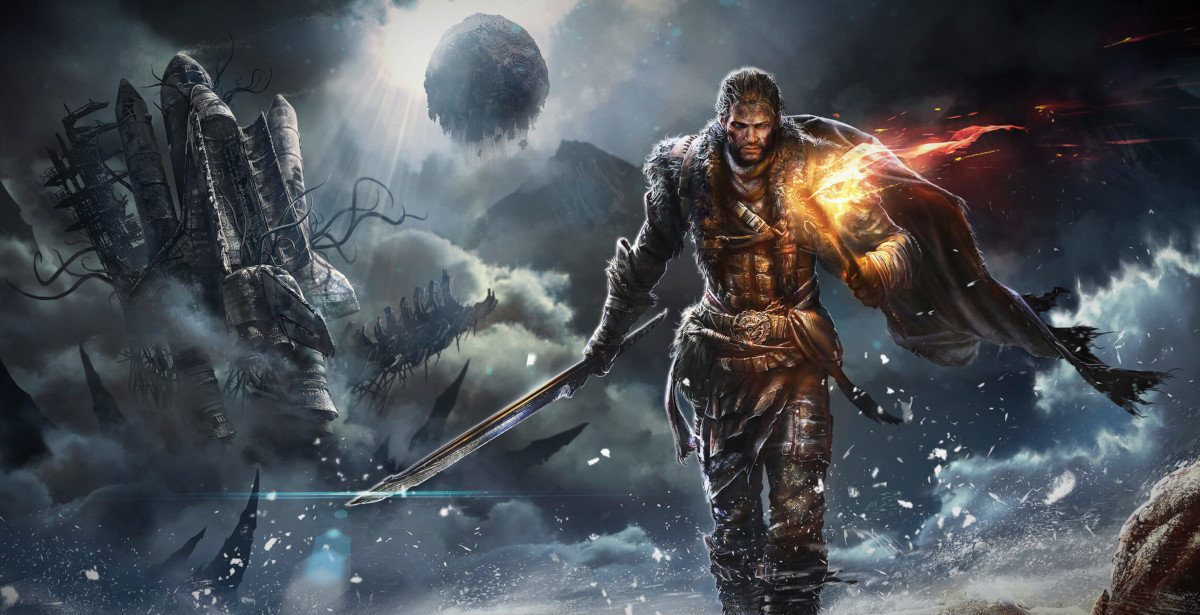 Fade to Silence started life in Early Access with a strong focus on survival, crafting, and settlement-building activities, within a hostile, post-apocalyptic world that has succumbed to an eternal winter. Leading up to release, the developers, Black Forest Games, have introduced companions, combat, and a rudimentary story to provide a little narrative context to your actions. Not unexpectedly, this development cycle manifests as several gameplay elements that don’t always come together in a cohesive way.

Fade to Silence places you in the padded boots of Ash, a survivor of some sort of global catastrophe that has left the planet prone to periodic blizzards that’ll kill anyone caught away from shelter. Waking up in an ancient crypt and swiftly reunited with his daughter, Alice, you’re immediately confronted by a mysterious, wraithlike figure that seems hellbent on tormenting you with an endless barrage of disparaging remarks. If the developers were hoping to create an antagonist you’d grow to hate, they’ve succeeded (but for those less amused by the constant taunting, you can disable it in the menu).

The backstory is doled out in extremely short snippets whenever you rest for a sufficiently lengthy period; hell, one was simply a static screen with several seconds of heavy breathing. I get what they’re going for, but these scenes are too sporadic, shifting between Ash and other perspectives, ensuring it feels incoherent. If you’re looking for a narrative-driven game, Fade to Silence is probably not for you. 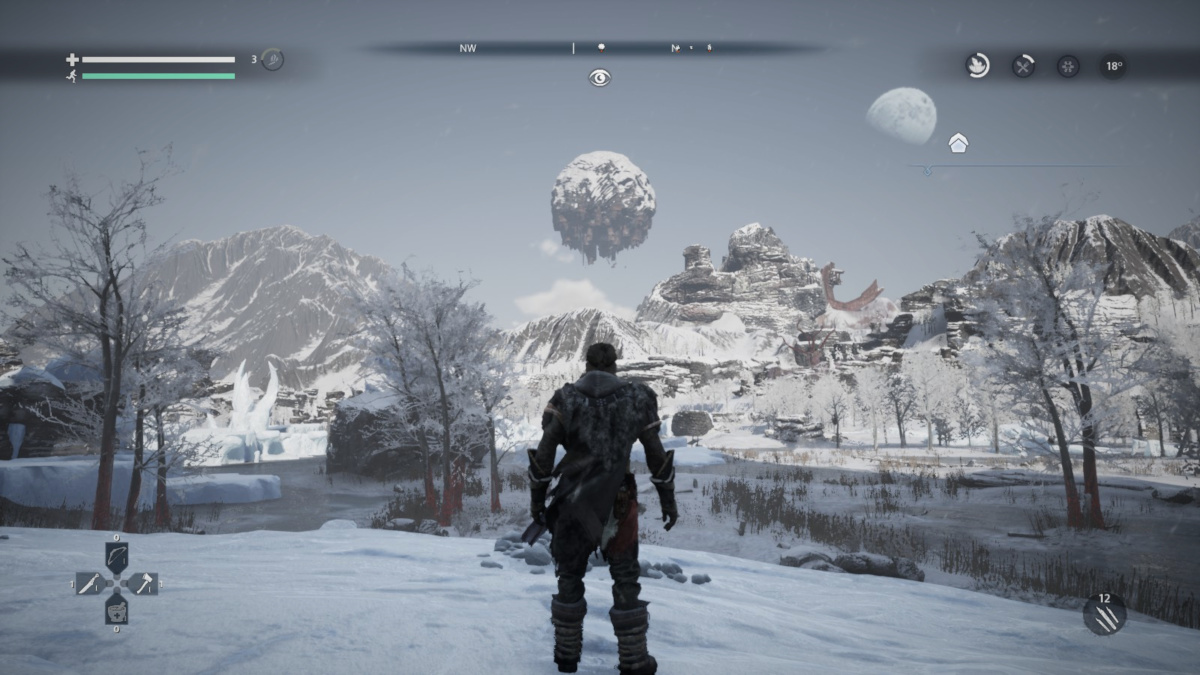 Ever wondered what happened to the Brethren Moons? Between the enemy designs and this low-flying monstrosity, Fade to Silence could work as a Dead Space 3 epilogue.

If you’re someone who simply wants a hostile sandbox to play in, one with detailed survival mechanics, Fade to Silence may scratch that itch. The core gameplay loop of collecting resources, gathering survivors, claiming back the map from the forces of corruption, expanding your settlement, and upgrading your gear, is all well-developed. Things start off slowly as you push out from your camp on foot, with pitiful gear and low survivability, restricted to collecting only basic resources to generate heat and food. Before too long, you’ll stumble across a survivor, recruit them by way of an underwhelming mini-mission, and start allocating tasks. Once you've amassed two or three survivors (you can decline to recruit them for reasons unknown) you can start building new structures at your camp; send them out to harvest wood, meat, and metals; and give yourself breathing room to push further into the large map.

The core gameplay loop of collecting resources, gathering survivors, claiming back the map from the forces of corruption, expanding your settlement, and upgrading your gear, is all well-developed.

Basic stockpiles of firewood and grubroot eventually give way to untainted meat, pristine wood, and copper. Increasing up your relationship with followers – a simple matter of keeping them fed and warm, before listening to some backstory and passing comment by way of a rudimentary dialogue wheel – provides new skills, like wood- and metalworking, allowing you to build new crafting-related facilities that refine basic materials into higher-tier variants. This, in turn, allows you to craft new gear and even more structures to improve you and your camps survivability. Survivors come with varying health, melee and ranged stats, and you can recruit them into an “expeditions”, accompanying you into the wilds, making combat easier, but also running the risk of losing them (and not necessarily to the monsters or inclement weather…). 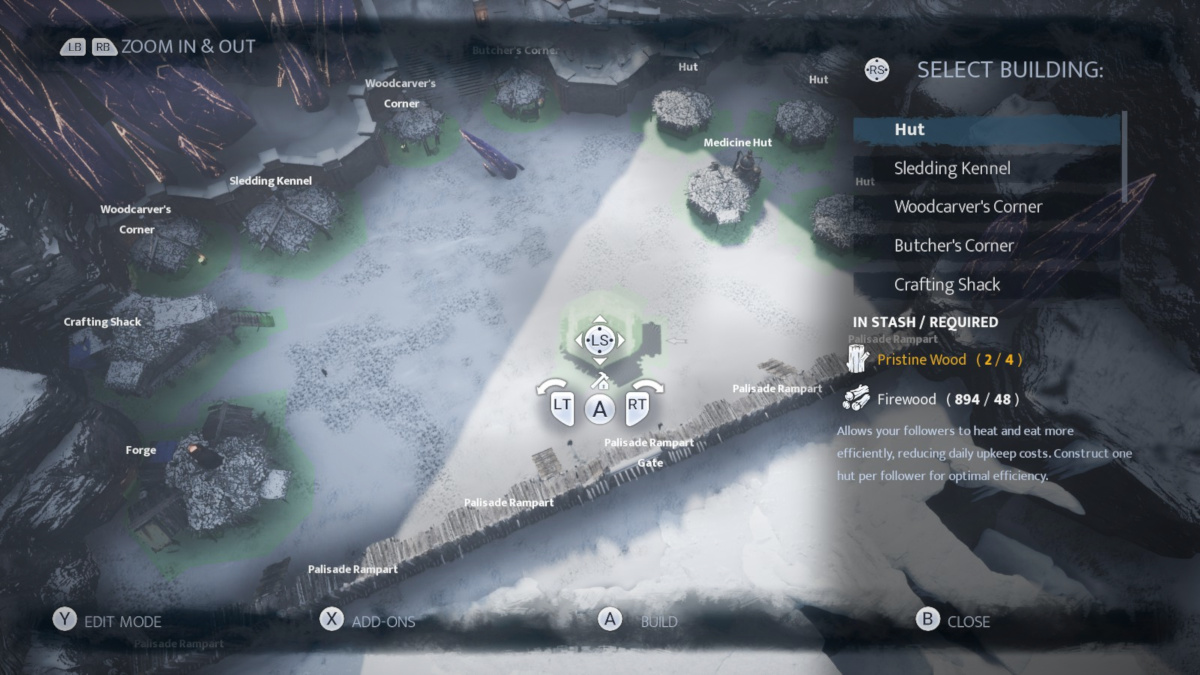 The best part of Fade to Silence is micromanaging your followers, refining new materials, and upgrading your camp.

All these interconnected systems eventually result in a steady supply of resources, swiftly upgraded to new materials in your camp, and, before long, you’ll have a thriving mini-community that only needs the occasional assistance during infrequent monster attacks (you can ignore these too, if you don’t mind upsetting your followers). As time passes quickly in-game – and you can rest at any campfire to speed things up – Fade to Silence has a distinctly more-ish quality. There’s always something you could do quickly: increase your resource gain, produce a new crafting material, craft new gear, or simply clear out another corner of the map. I kept going back, even when other gameplay mechanics were doing their best to annoy me.

The end goal, so far as I could understand, was to completely reclaim the map by purging the region of gruesome nests - which spread a red web of pulsating tendrils - and cleansing mysterious crystals found in large outposts, which reveals more of the map and provides fast-travel points. You seemingly absorb the corruption into Ash, and similar crystals are present near you camp, apparently having some bearing on the story that I never discovered. Occasionally, you’ll be forced to clear out “guardian” creatures first, however, you can often simply run up to the nest or corrupted crystal, mash a button to fill a meter, and purge the corruption - insta-killing any creatures in close proximity (this is far preferable to combat, but more on that shortly). 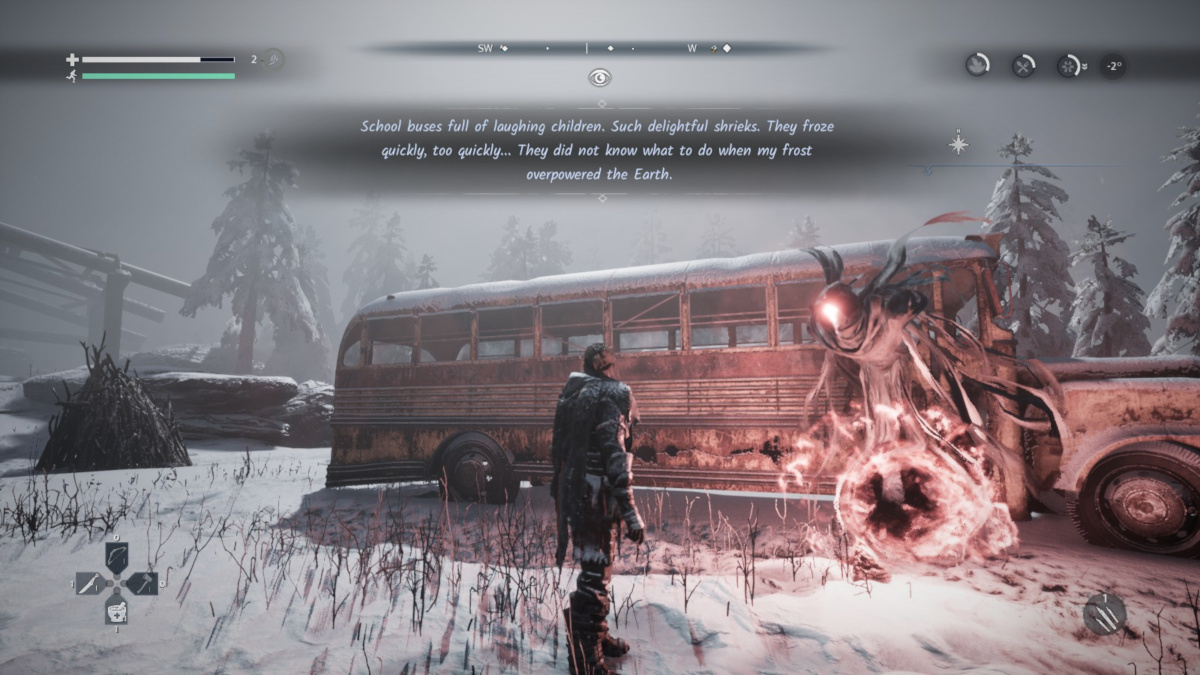 The "Inner Voice" is a grade-A a***hole that'll frequently pop up to criticise your decisions and revel in being stereotypically evil.

When exploring the wilderness - your attention drawn away from the metagame of upgrading your camp and supply lines - the quality of the experience is more variable. Travelling on foot or by wolf-drawn sled (some nests vomit up wolves, literally, when defeated) you’ll spend your time purging corruption, claiming resource areas, searching through innumerable chests and satchels, and avoiding blizzards. You’ll want to keep some firewood in your inventory and an eye on nearby shelters for when blizzards role in, but the rest of the open-world gameplay in Fade to Silence is mostly functional; mechanics you've seen a millions times before. A low-flying hostile moon lurks above, flinging objects at you when it passes overhead, but is easy to avoid and only really an issue when it catches you sneaking through an area or in the middle of combat – awful, awful combat.

Travelling on foot or by wolf-drawn sled (some nests vomit up wolves, literally, when defeated) you’ll spend your time purging corruption, claiming resource areas, searching through innumerable chests and satchels, and avoiding blizzards.

Hard-hitting enemies, a stamina meter, blocking, parrying, and rolling - tell me if you’ve heard this all before? Ultimately unavoidable, combat is by far the weakest element in Fade to Silence, with unresponsive controls, stiff animations, boring attack patterns, limited monster types, and the potential to be stun-locked to death whenever more than one is present. Blocking feels pointless, the parry window is inconsistent, rolls gain distance but use up too much stamina, and weapon combos don’t trigger reliably. 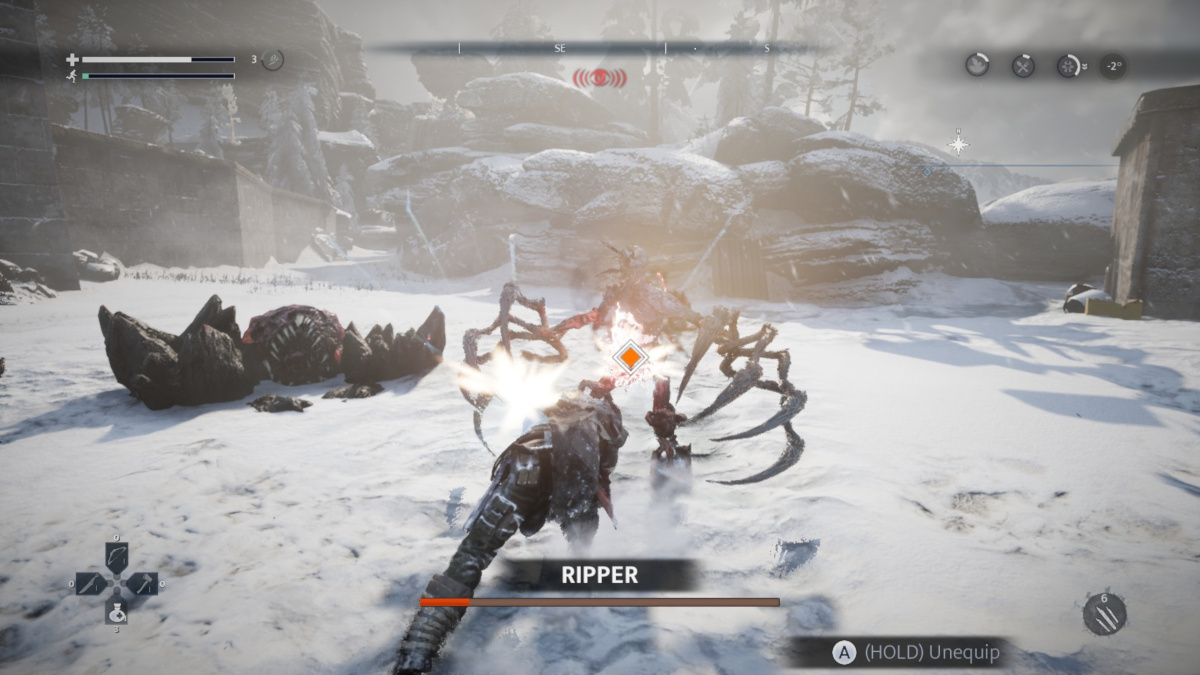 Combat plays out far, far worse than it looks, even after several permanent character upgrades.

There are two ways to deal with the rubbish combat, and it ties into the two gameplay modes on offer when you start: “Exploration” or “Survival”. If you want a roguelike experience, Survival gives you limited respawns, but you can upgrade the “Circle of Torment”, providing permanent boosts to your character that make subsequent playthroughs easier and slightly improve your abilities. Exploration mode gives you unlimited respawns, with no penalties on death, but you can never improve your basic stats, relying entirely on gear upgrades. Neither solution is optimal, though the ability to upgrade your pitiful stamina bar in Survival mode made it my preferred choice.

There are other reasons to avoid combat in Fade to Silence – the survival of your companions. If things work as intended, a companion that falls to an enemy or blizzard can be revived by the player and eventually recuperate (getting too cold means hypothermia, which caps your total lifebar). However, there’s an equally good chance they’ll simply disappear from the game world – something that made me choose to just venture solo when playing the Exploration mode. Vic, foul-mouthed and annoying as hell, was still a boon to my camp, right up to the point she was knocked off my sledge by a stalker (think super-annoying charging enemy that has the unique ability to stun-lock you to death by its lonesome if you’re unlucky), and promptly disappeared from my game. Combat is both rubbish, and the source of many glitches. 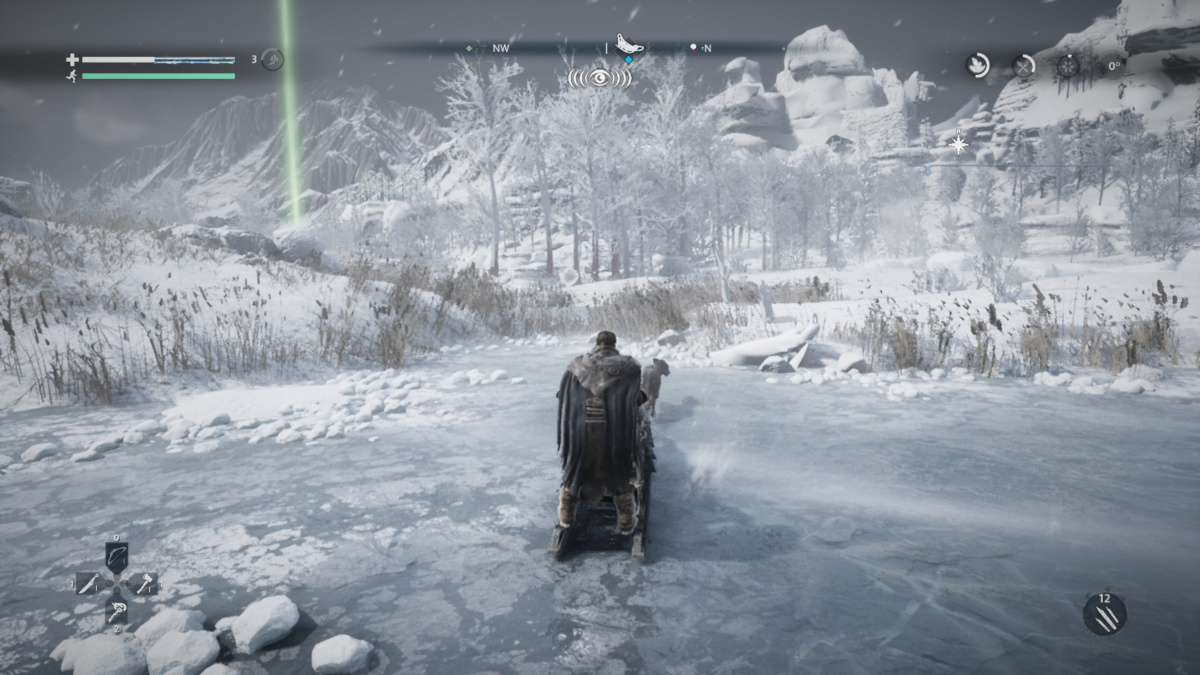 Any game that allows you to rescue wolves, and then cruise through the world on a wolf-drawn sled, immediately gets +1 to the score.

Back to some positive, Fade to Silence can look amazing, with beautiful - if barren - environments and weather effects, paired with snow accumulation and deformation during blizzards. Cruising across frozen lakes and rivers, or through thick snows drifts on your sled - especially during sunrise or sunset - is incredibly atmospheric and creates an oppressive sensation of solitude. It’s only some dated looking character models and animations that bring down the experience. I can’t speak for the consoles, but the PC version was easy to get running smoothly, even when played on my notebook - sporting only a 2.3GHz i5 CPU and GTX 1050 – while travelling.

I’m a huge fan of janky games from European developers – give me clunky but unpredictable games like The Technomancer or ELEX over the polished but formulaic Dragon Age: Inquisition and Mass Effect: Andromeda any day – however, Fade to Silence still needs work. It has a solid foundation of survival and crafting mechanics, coupled with great visuals, but is let down by an incoherent story, awful combat, and the glitches that go with it. I’ve no doubt several patches can smooth over these elements in due time but, on release, this is only for fans of survival sandbox games.
5.5