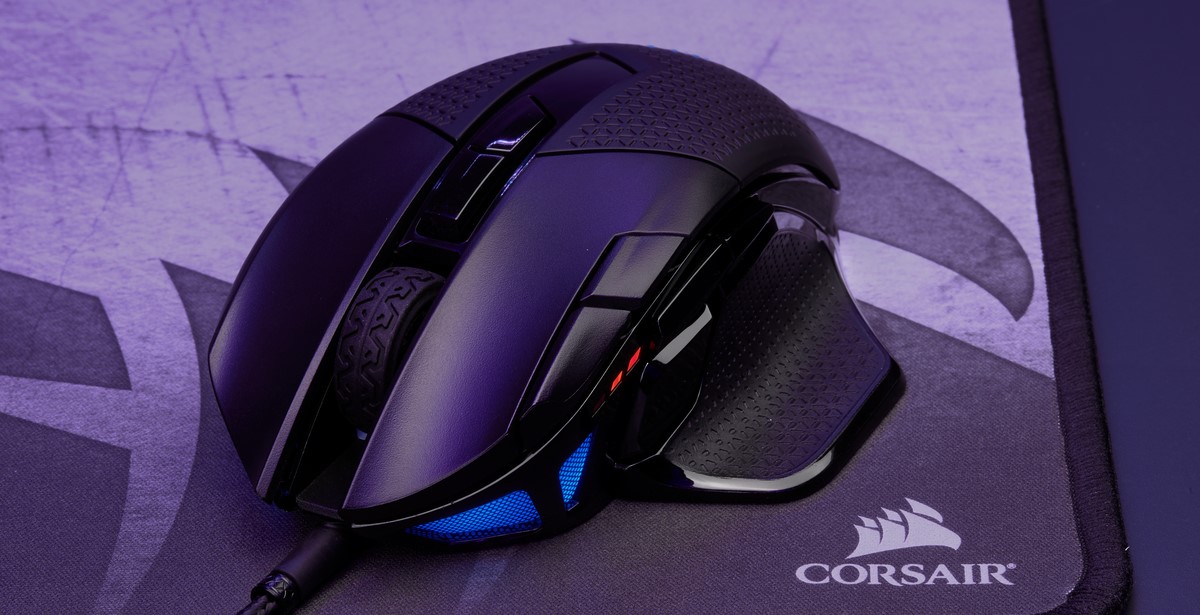 Corsair has been making good in-roads into the PC peripheral market with their keyboard and mouse options, providing gamers with alternatives to other offerings, that offer as much functionality and comfort as they do. Well, that is until I got my hands on this mouse. It’s not that it isn’t a good mouse or that it isn’t customisable, it’s just not as customisable as I expected. 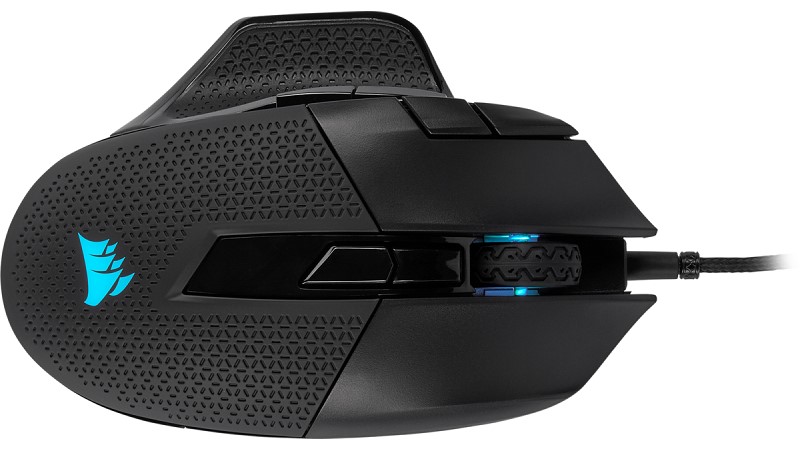 This criticism doesn’t extend to the physical mouse. As is fast becoming a standard instead of a feature, the Nightsword comes with a compartment in the base of the mouse that you can add any combination of three 4.5g and three 2.8g weight blocks. This so-called “weight tuning” enables you to customise the mouse for those who aren’t satisfied with the weight of the case and internals. This is mainly for the e-sports crowd, especially in FPS' where small, fast movements are required that could lead to hand fatigue or overshooting a target if too heavy or too light.

As is fast becoming a standard instead of a feature, the Nightsword comes with a compartment in the base of the mouse that you can add any combination of three 4.5g and three 2.8g weight blocks

That is the only hardware customisation that the mouse offers, allowing you to customise the weight between 119g and 141g to suit your taste. What is handy is that the mouse has weight sensors in it that reports the position and which weights are in which slots in iCUE, giving you a quick reference to the positioning of your custom weight settings.

In terms of buttons, the mouse is loaded with them; firstly, you have the usual left and right mouse click buttons, rated for 50 million clicks, as well as the mouse wheel button. In addition to that, you have two buttons behind the mouse wheel and three by your right thumb. The lowest one by the right thumb is a “sniper button” that reduces the DPI for increased accuracy when you want to headshot that annoying enemy.

Now, this is where my gripes with the mouse start. I am used to the buttons on top of the mouse, behind the wheel, being mapped to on-the-fly DPI adjustments. Press the forward button to increase the DPI and the back to decrease. Years of using a gaming mouse has trained me to expect that. But instead, after a firmware update, the DPI adjustments were mapped to the two buttons by my right thumb which are above the headshot button. 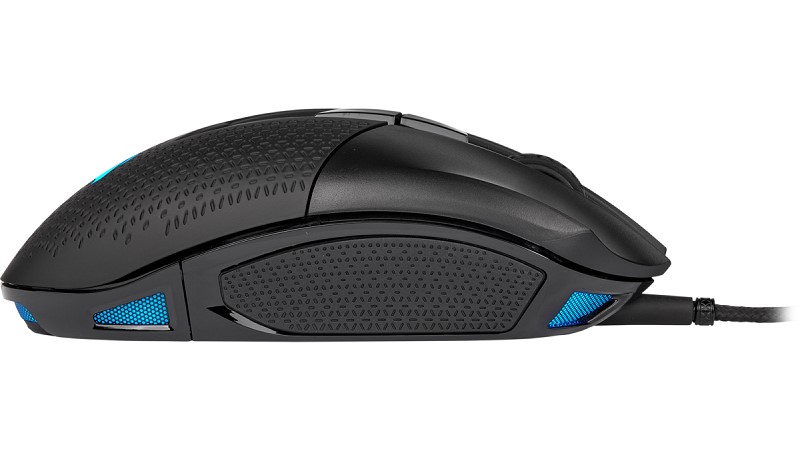 No problem, I hear you say, the marketing material says that the mouse is programmable via iCUE. Sadly, unless I was missing the settings these buttons are not remappable but can only be programmed with macros. In other words, I couldn’t switch to the DPI adjustments to the top buttons as I am used to, but I could create macros such as mouse wheel click plus spacebar to activate a certain action in Watch-Dogs 2 such as setting off a grenade. Now, while I experienced this issue, Rob had the buttons mapped the way I wanted them when he tested out the mouse after I finished my review time, but this seems to be because he didn’t install iCUE and Windows set the buttons to the default settings.

With iCUE, you have to glance to the mouse and just above the sniper button to see which combination of three lights are lit up to let you know that the DPI has increased or decreased, which I feel could benefit from an on-screen display. This takes precious milliseconds away from the screen. Now this could be argued as less intrusive than a pop-up notification in the bottom right corner, but at least then I am keeping an eye on the action instead of looking away, and in a competitive match, milliseconds count. 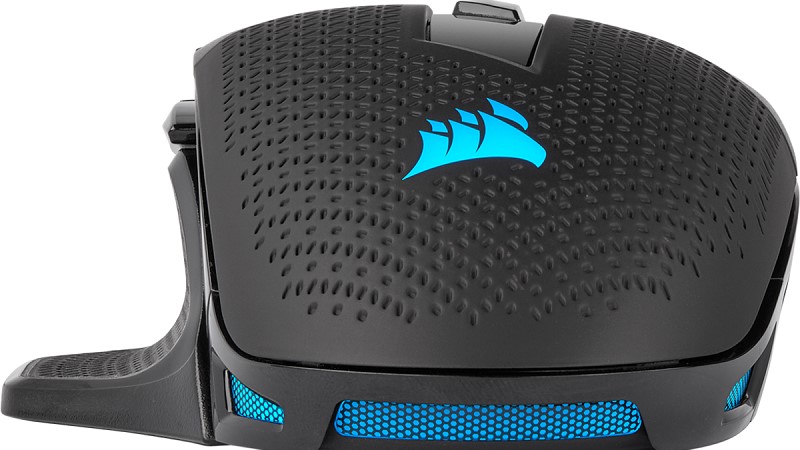 With that out the way, the top buttons, for me at least, were useful for switching between different profiles - easily created in iCUE. There, I could set macros up for use in Excel - I am an accountant, after all - ones for use in GiMP for photo editing, a couple for Watch_Dogs 2 and one for Ghost Recon: Wildlands. The ability to create macros is a great timesaver and advantage in a game, but obviously not something that is recommended or encouraged - or at all approved of - in multi-player games.

There, I could set macros up for use in Excel - I am an accountant, after all - ones for use in GiMP for photo editing, a couple for Watch_Dogs 2 and one for Ghost Recon: Wildlands

On a side note - seriously, do not be that guy who uses legal software to create macros to cheat in a game against other players. In fact, I do know that anti-cheat software will flag your account in games like Starcraft 2 and MOBAs if it detects impossibly fast button combos so just don't do it. Sadly, the mouse can only store three onboard profiles to change on-the-fly so if you want to create more as I did, you have to switch between them in iCUE.

As some of you are likely aware, I hate RGB lights (ed - he secretly does and that's why he wages such a war on it). I really hate them, I think that they are a waste of time, energy and money and things were better back in the days of beige boxes that sat on your desk. That last part is not quite true, but I do not like RGB. Unfortunately, I am in the minority as evidenced by the millions being raked in by hardware manufacturers for including RGB in their products. So, for you horrible, horrible people, Corsair has added in a four-zone lighting effect, which I will admit is very impressive. You can change each zone to suit whatever pattern you like, and you are able to set the light to change when you change profiles.

Corsair has added in a four-zone lighting effect, which I will admit is very impressive. You can change each zone to suit whatever pattern you like, and you are able to set the light to change when you change profiles 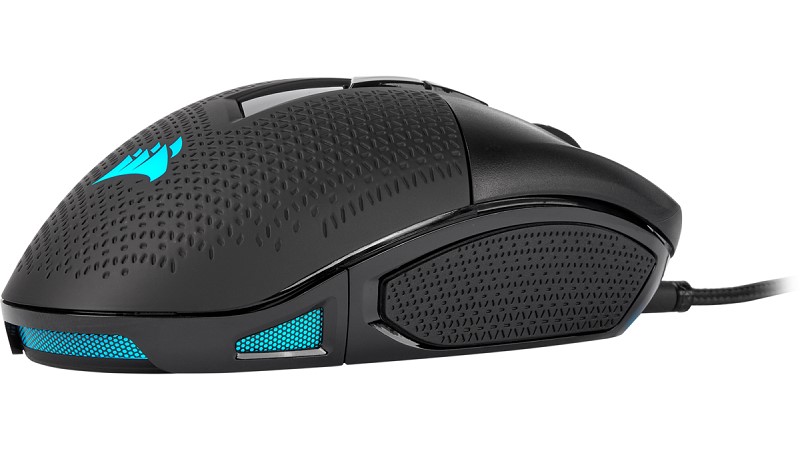 On the bottom of the mouse, are these glide pads that reduce friction making for a smoother experience. Even with that, I suggest you calibrate the mouse to whatever surface you are using it on, as I did notice a slight difference in performance when I was using my mouse mat and when I used it on plain wood without recalibrating it. It isn’t major, but if you are buying a mouse like this, these small margins matter.

Finally, the mouse is wired without an option for wireless operation, which suits the e-sports and serious gamer types. Frankly, I don’t notice the additional latency with a wireless mouse, but I am not a “serious gamer”.

Having said all that, I still haven’t talked about performance and frankly, the mouse performs just as I would expect. There is no noticeable lag when inputting a command, macros are executed flawlessly, and the sniper button is incredibly useful in lining up those headshots. The mouse feels good in my hand using a “palm grip” style. My hands are about average size and all the buttons are easily reached and toggled, I never found myself reaching for a button or searching for one. 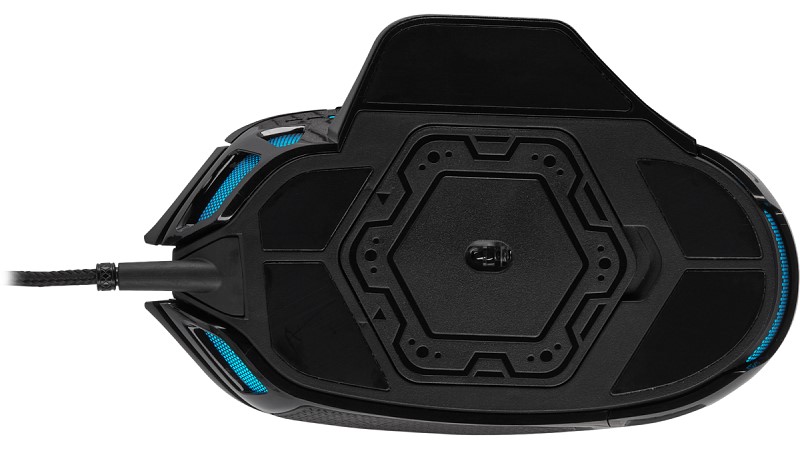 The Corsair Nightsword RGB mouse is a good mouse with decent functionality. The lack of remapping is unfortunate and dings the score as does the lack of an onscreen notification of changes to DPI. Despite that, the Nightsword is a good mouse for anyone wanting to upgrade to a more customisable mouse and the price of between R 1300 and R1 400 is reasonable for this level of customisation in a gaming mouse. If you are serious about moving up the ranks in your favourite FPS or MOBA, using this mouse won’t make you a completely better player, but will help you improve with practice.
7.5

Can create profiles for different applications

Only stores three profiles onboard

No on-screen notification when you adjust DPI