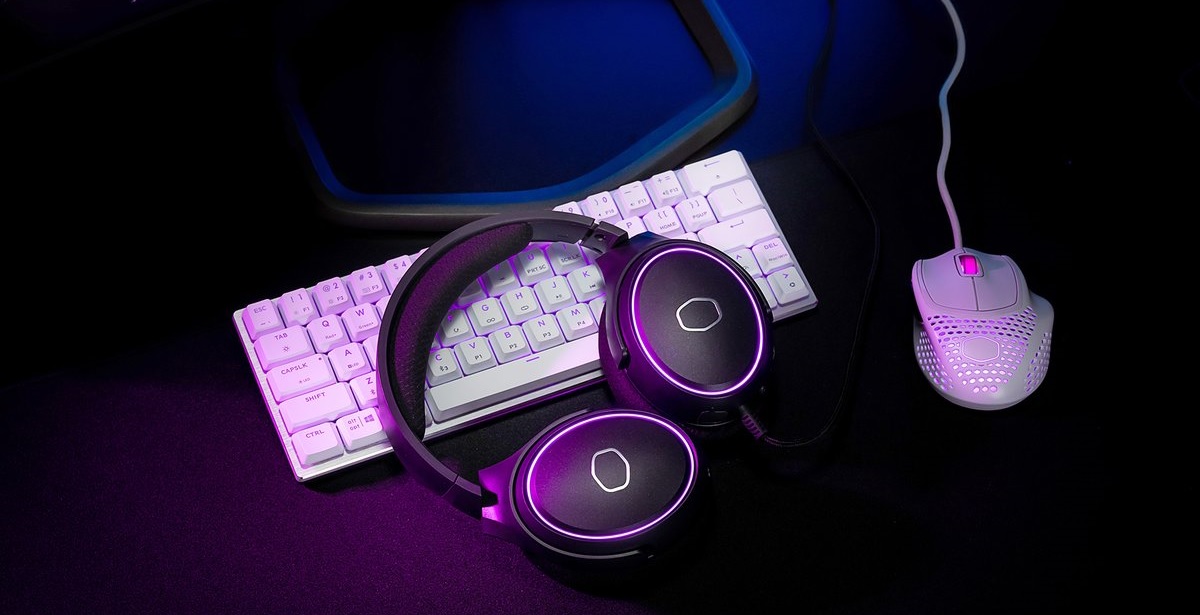 Cooler Master’s mid-range MH650 is a feature rich headset that’s aimed at console and PC users. The headset’s main selling point is its “Virtual 7.1 Surround Sound” pushed out through its 50mm Neodymium drivers. 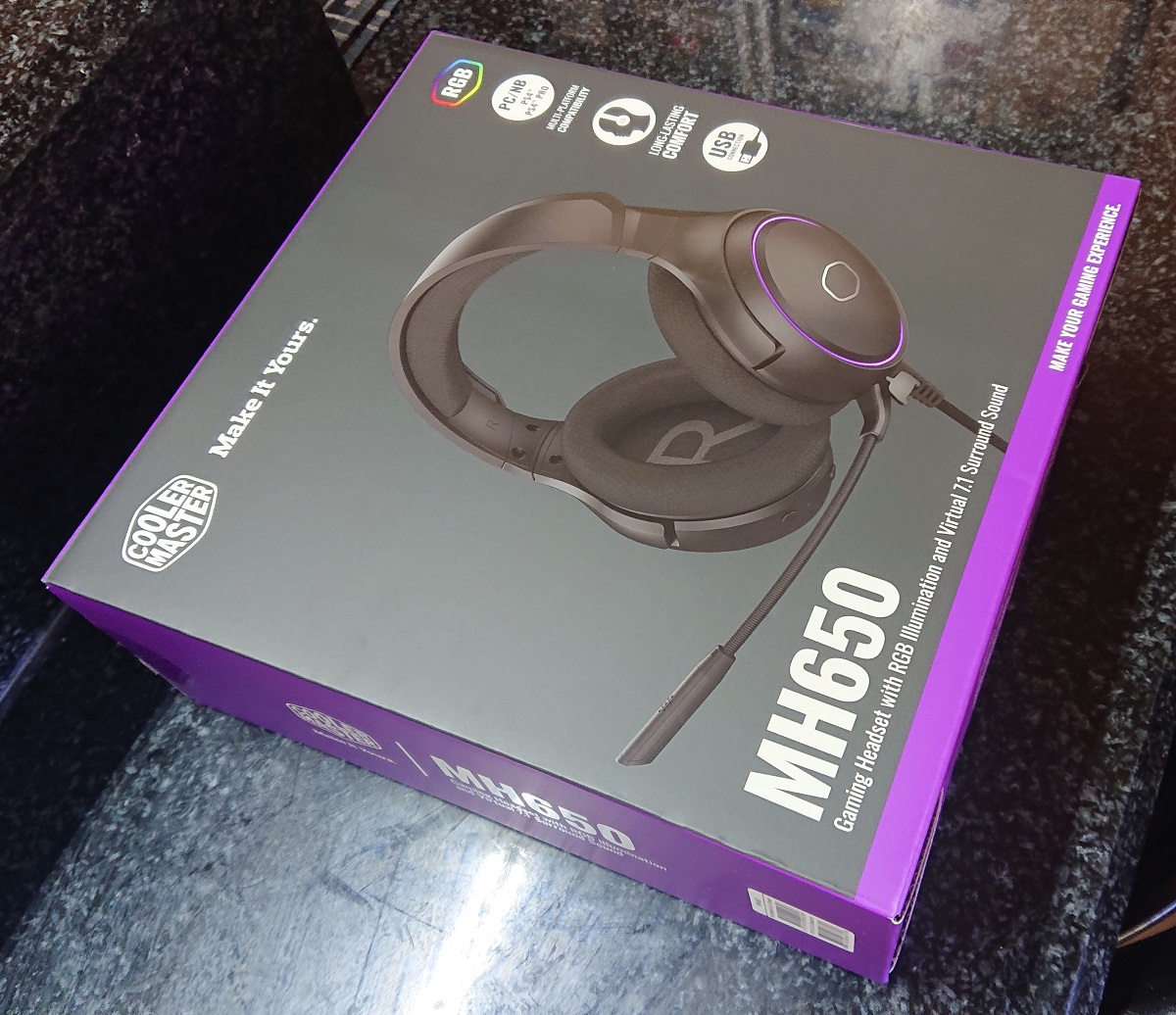 First up, the technical specs and then we’ll dive right into the sound and performance aspects of the device. 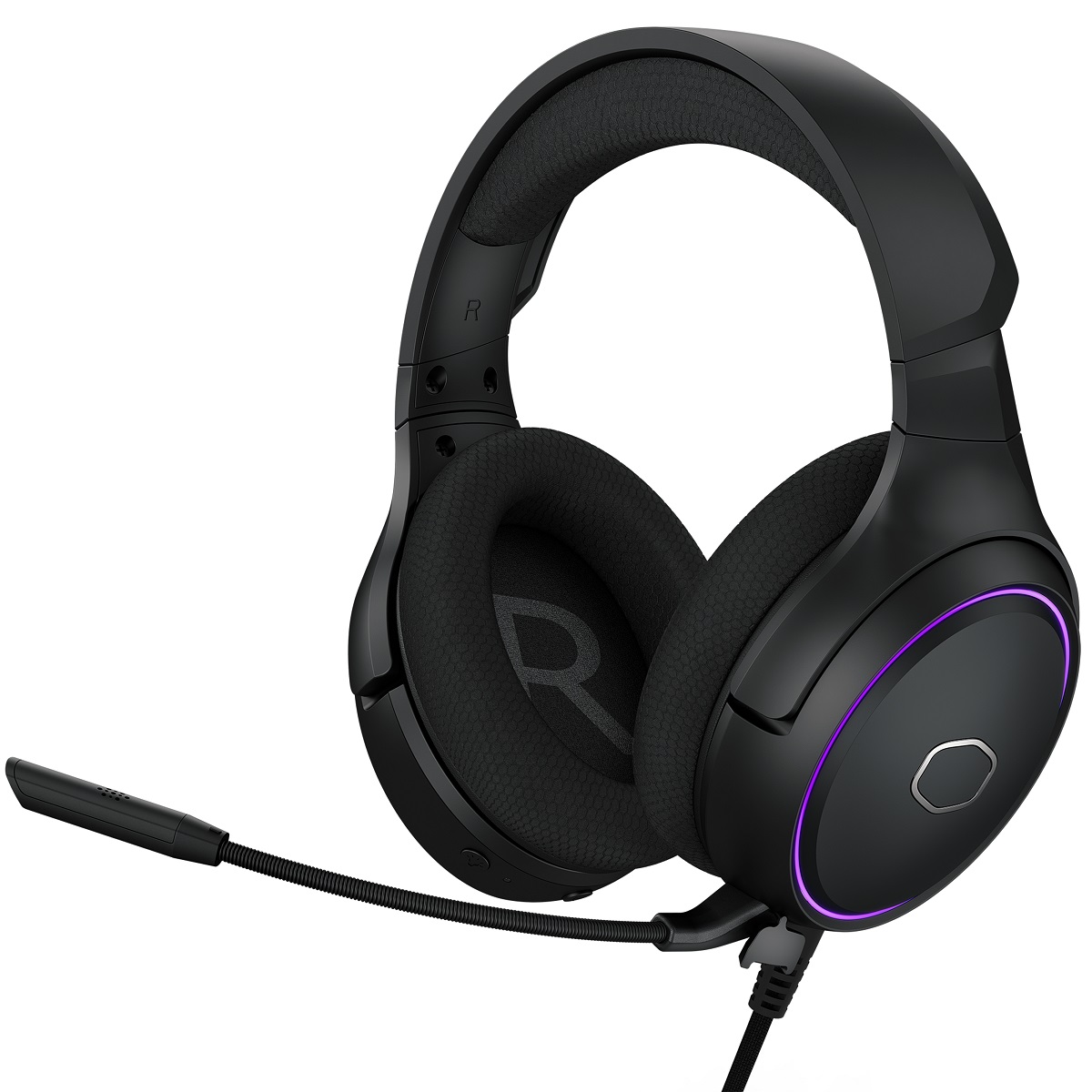 Now that that’s out the way, starting off with the sound right off the bat, the MH650 is a very loud headset. So loud in fact that you could place this on your desk, increase the sound on your PC to 100% and use the headset as a set of speakers. We do not recommend using the headset with the volume maxed out while it’s on your head. It’s very loud and prolonged usage like this will most likely damage your hearing.

A consequence of the loudness is that even though this is a closed-back headset, sound leaks out of it into your environment. If you’re playing music with the volume turned up, and someone else is nearby, they’ll definitely hear what you’re playing. 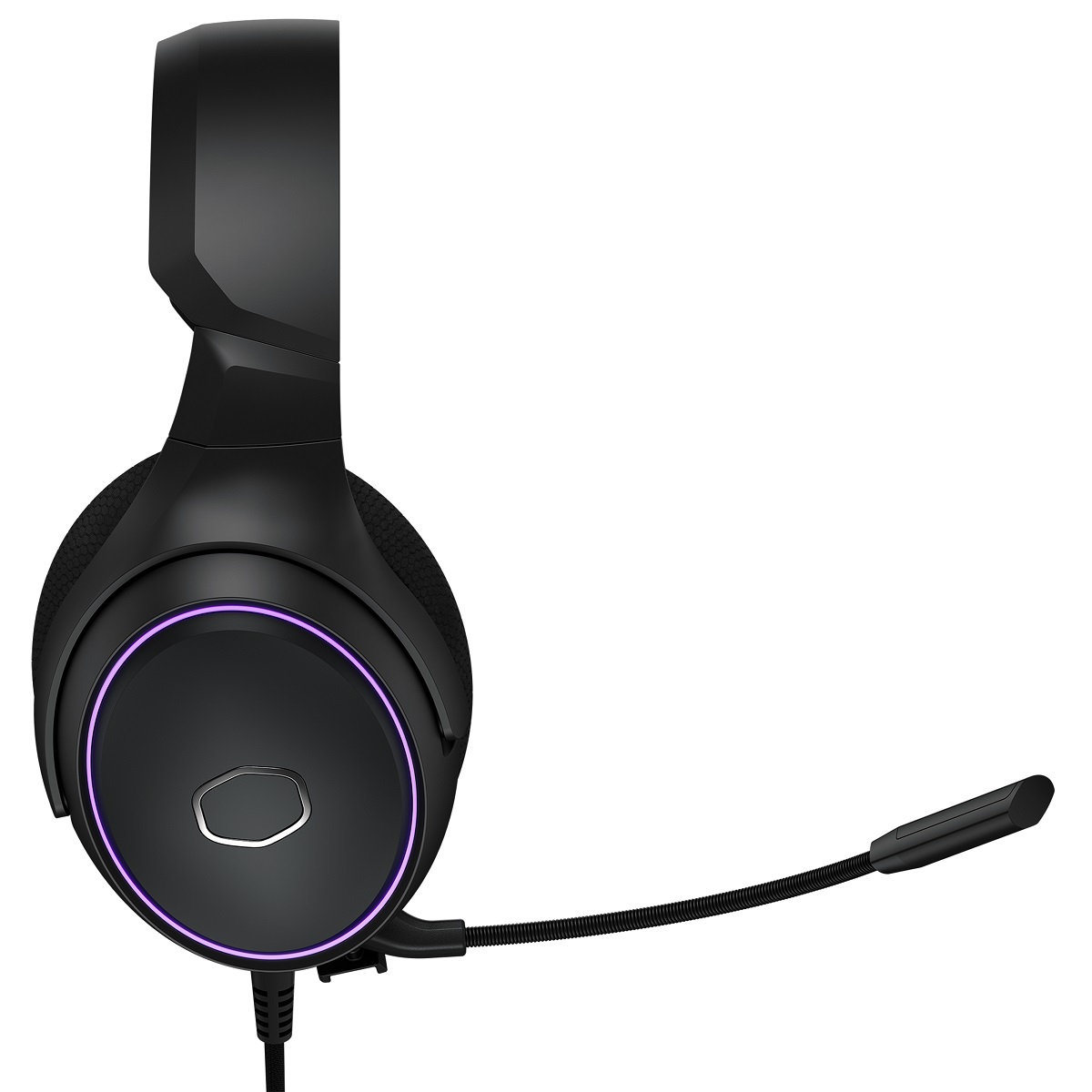 Coolermaster have opted to keep the headset volume control separate from your PC volume control. So fundamentally while you can control the volume on the headset itself by moving the volume control up or down, you will still need to adjust your PC sound settings too. While typing this review and listening to music, I’ve had the sound maxed out on the headset itself while my Windows PC audio is set to 2%. Yes, you read that correctly, 2%… Bumping it up further, past around 30% or so, starts really outputting way too much sound for daily general usage or even gaming. This headset has a heck of a kick.

The “Virtual 7.1 Surround Sound” can only be used with a PC and once you have Cooler Master’s MasterPlus software installed.

The MH650 has a great frequency range of 20 - 20,000Hz which is ideal for gaming and listening to music. The “Virtual 7.1 Surround Sound” can only be used with a PC and once you have Cooler Master’s MasterPlus software installed. Users can also toggle it on or off with a simple button press on the headset itself if they don’t want to open the software each time to do this. In the software, you can play around with the 7.1 surround sound by moving the “speakers” around and tweaking various settings. Thankfully this is extremely easy to do and you can even simulate circular movement to get the settings just the way you want them to be. 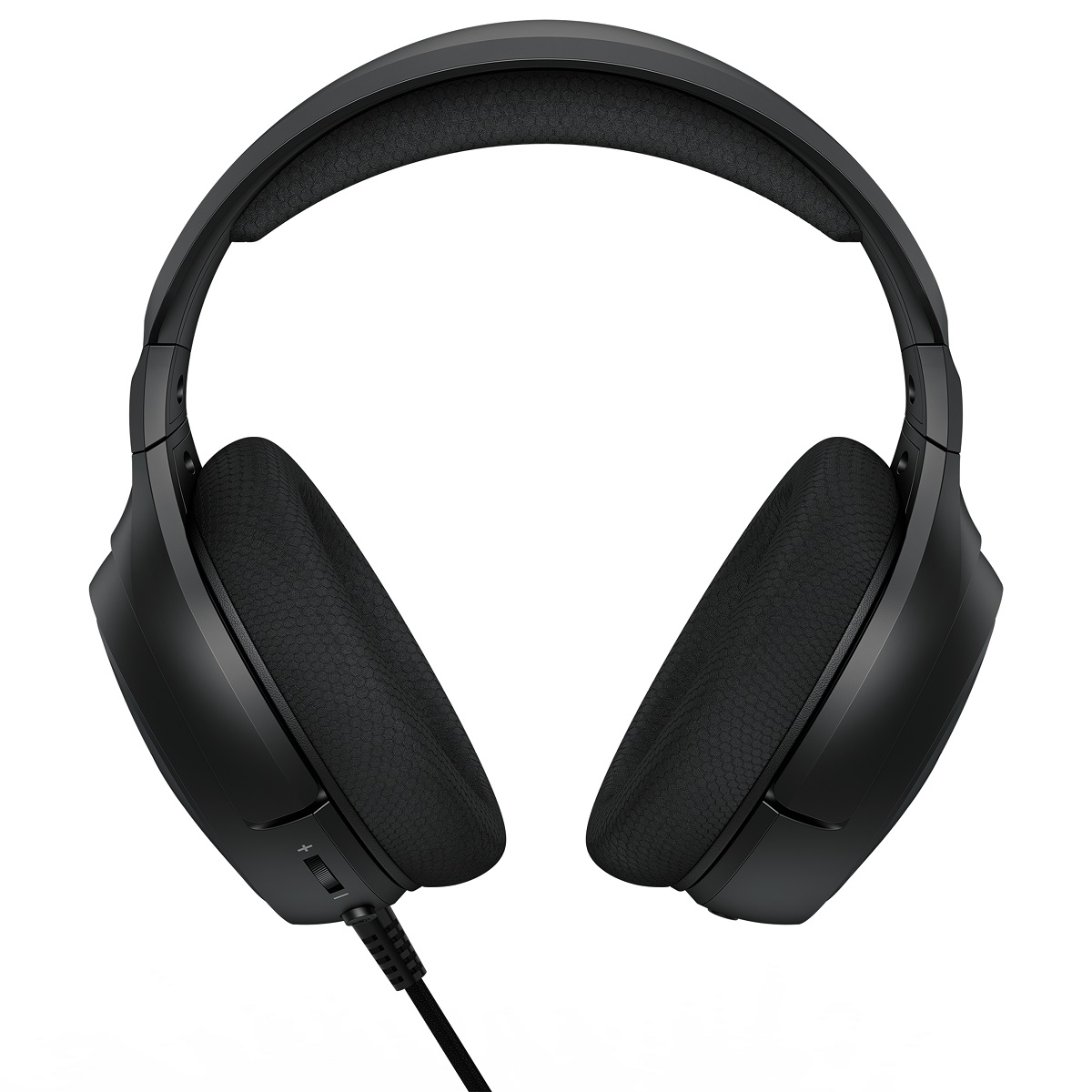 The “Virtual 7.1 Surround Sound” will most likely be a controversial aspect for some users. Having it enabled certainly does make a noticeable difference. However, this difference isn’t exactly super massive. I suppose this is good news for gamers who want to use the headset with a console instead of a PC. You definitely aren’t missing out on much on the 7.1 surround sound front since the actual implementation isn’t mind-blowingly amazing.

Using the MH650 for music, I played multiple songs from a variety of different genres and they all sounded great. I also played a video game that’s heavily reliant on crystal clear voice sound and orchestral audio, the Mass Effect Legendary Edition. The 7.1 surround sound was far more noticeable in this game than it was listening to music. Compared to sound from other audio devices which I use, the MH650’s sound was on the louder side and consequently also seemed more echoey. Audiophiles will most likely tear the headset’s sound apart but for the average gamer, this is definitely not a bad headset and it certainly delivers some loud sound. 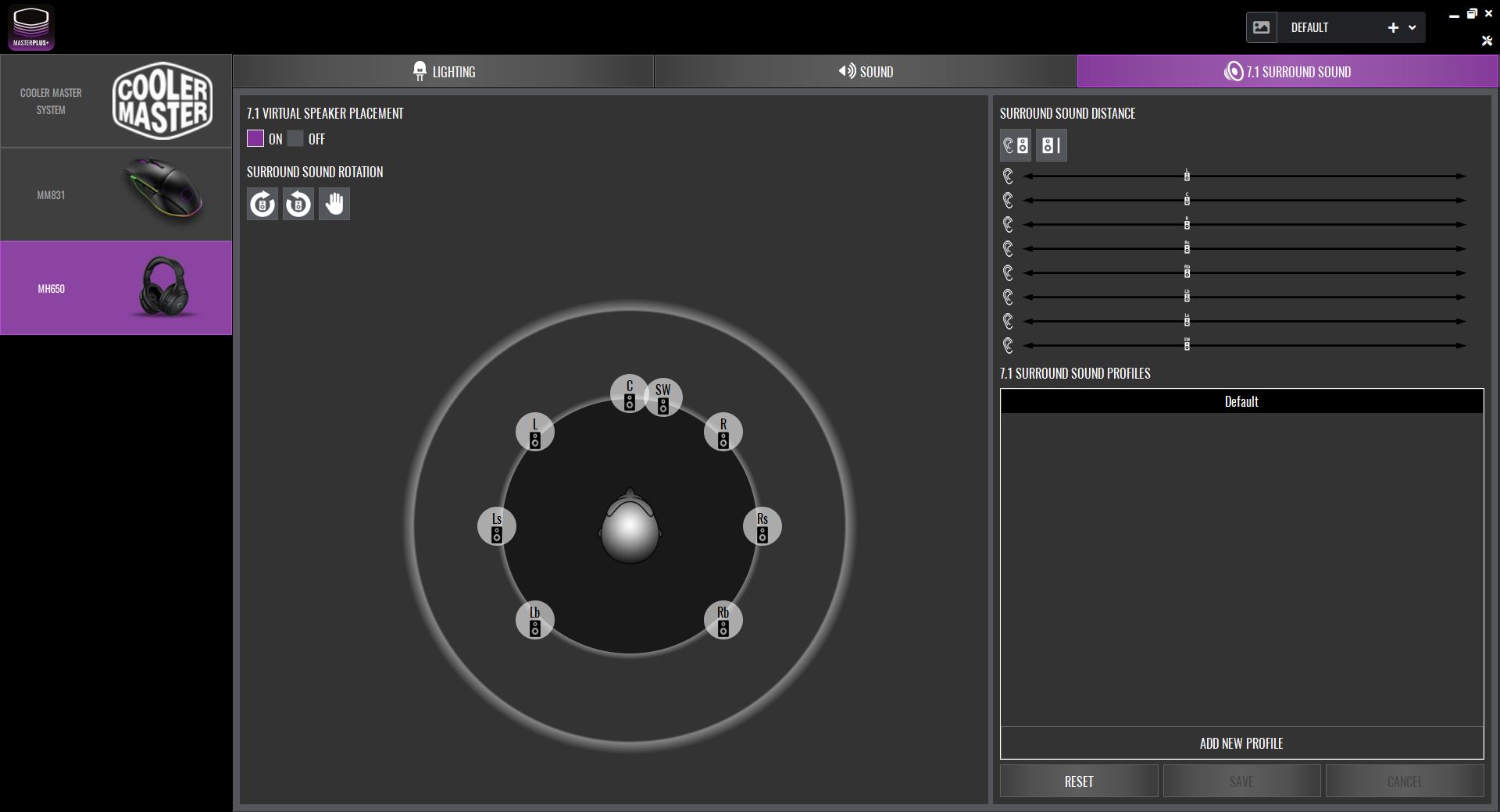 The MH650’s design is quite good though from a build quality perspective. The headset is not very heavy yet feels solid. The ear cushions are extremely comfortable and even after wearing them for prolonged periods of time, you won’t feel any pain. This does however depend on your own ear size and if your ear fits snugly inside the earcup or not. User results may vary as they do when it comes to these things but in my testing, it was extremely comfy.

Kudos to Cooler Master here since the headset headband really is quite comfortable.

The headset headband is steel covered with plastic and has a soft cushioning material at the top which will rest on your head. The headband can be easily adjusted to make the headset sit more or less firmly on your head and against your ears. Kudos to Cooler Master here since the headset headband really is quite comfortable. How long the mesh fabric and foam ear cushions will last, remains to be seen but they do instill a reasonable amount of confidence in me that they’ll hold up for longer than the 2 year warranty period. 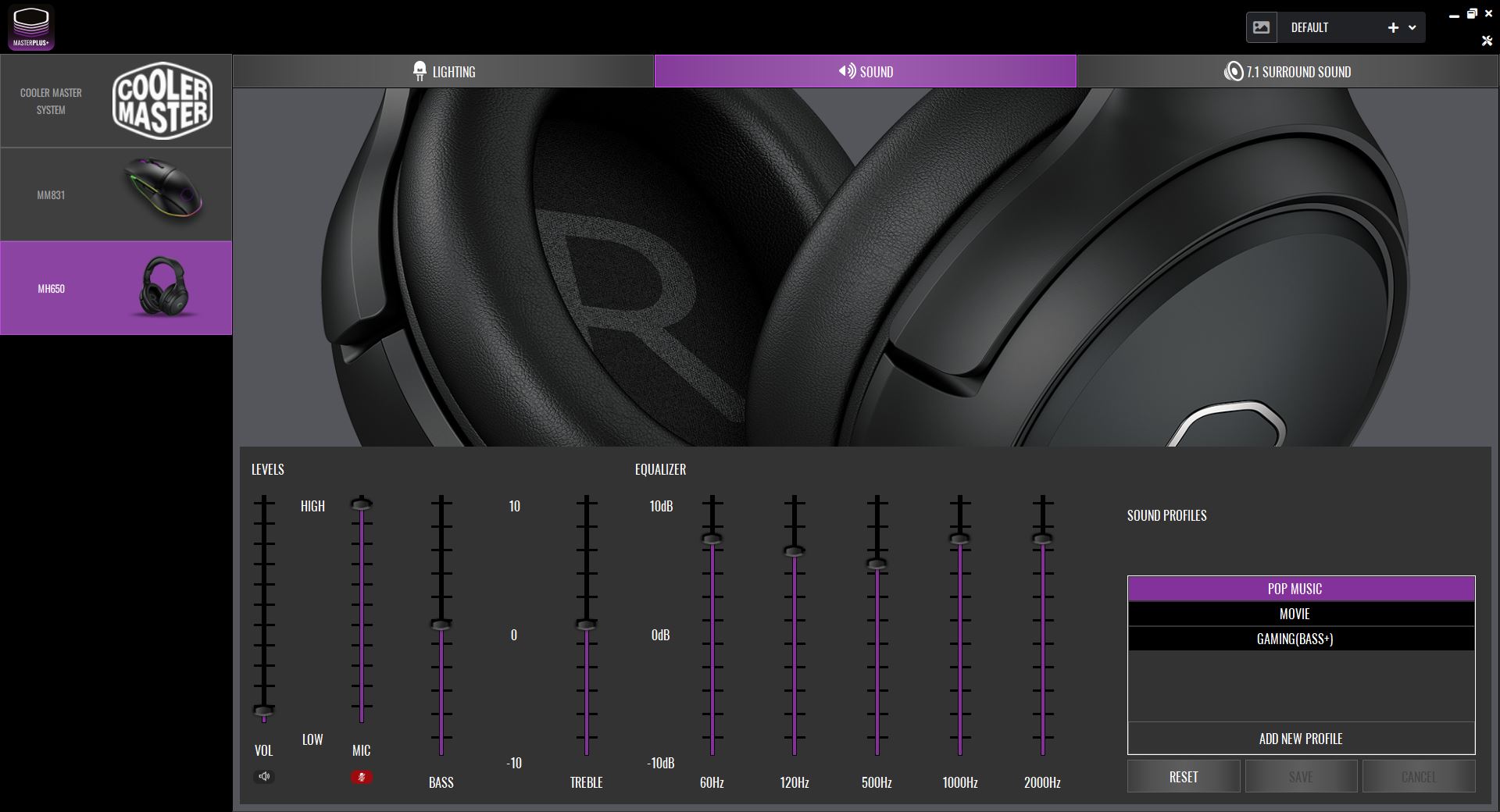 On the left hand side of the headset, there’s a non-removable USB Type-A cable so if you’re looking to plug this headset into a headphone jack, you’re out of luck here. Coolermaster have opted to include a USB Type-A to USB Type-C converter in the box though which is a nice extra.

Also on the left hand side, on the earcup, is a removable boom mic. The MH650’s mic quality is a bit of a mixed bag. To test this, I fired up Discord and called a friend up. I used my personal Corsair Void Pro first and had a mini conversation. Then I swapped over to the MH650 and asked my friend if he noticed anything different with my voice and the sound quality. Sure enough, there was an immediate reaction as soon as I changed mics. The reaction being “You suddenly sound different. Like you’re further away”. Alas, gone was my crisp voice quality. The MH650’s mic is therefore ok enough for calls and general usage but if you’re doing anything that requires clean, crisp mic audio, I suggest looking for a better alternative. Even adjusting the only mic setting in the software barely did anything to resolve this problem and playing back recorded audio of myself, it sounded distant or washed out. 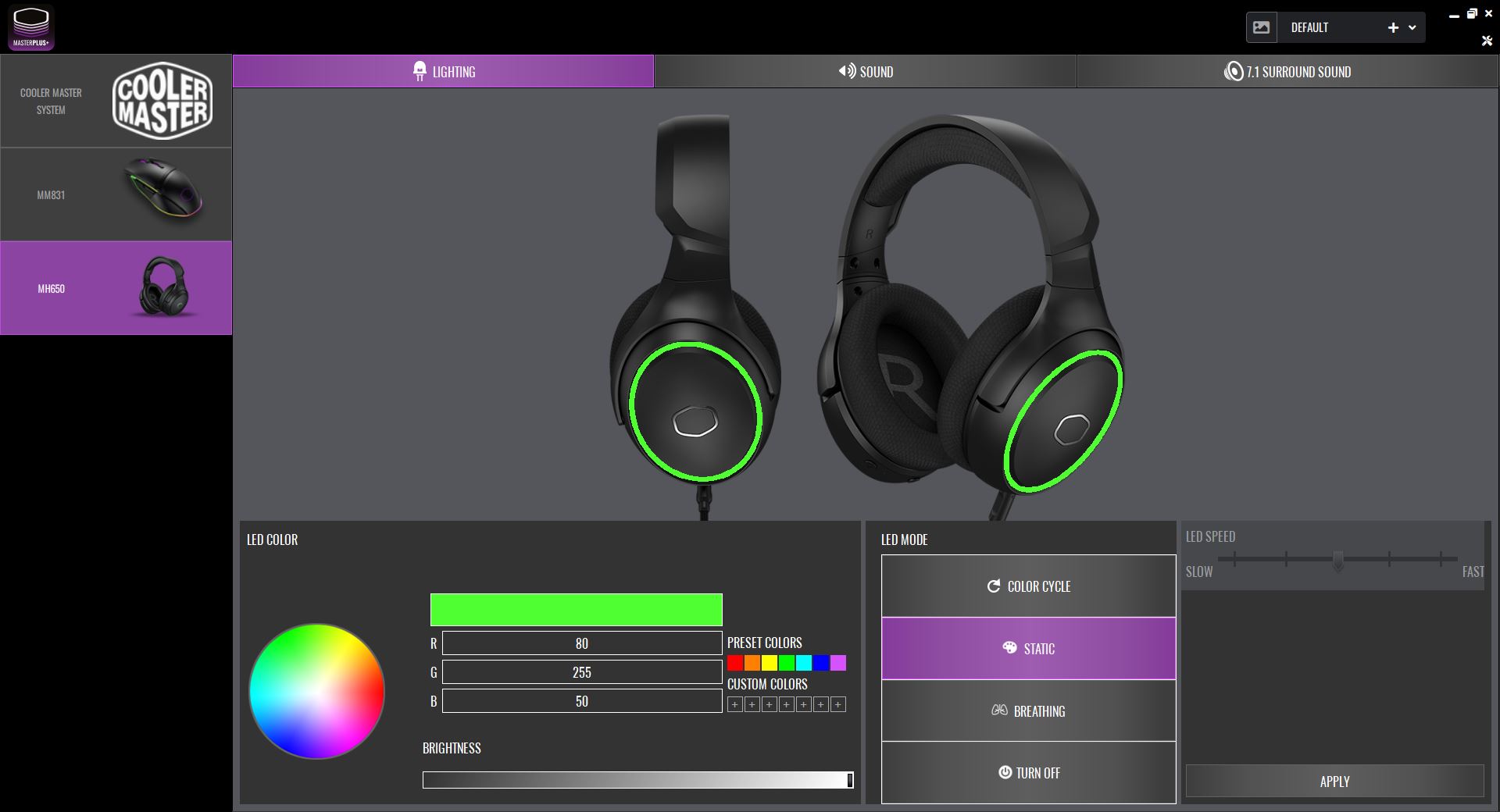 An extremely baffling decision from Cooler Master is the fact that while you have their MasterPlus software open, and if you press the mute button on the mic, any RGB settings you have selected are immediately overridden. Once muted, the headset RGB light rings on both earcups start flashing red extremely fast. This cannot be disabled in the software nor can it be disabled on the headset itself despite there being a button on the right earcup which is supposed to control the lighting. Whether or not this is a design choice or if the headset I got was defective, I don’t actually know. We have reached out to Cooler Master about this issue though and we hope that they take this feedback seriously because the flashing red lights are ridiculously obnoxious and it’s shocking that this cannot be disabled. Users are advised to mute themselves in their PC audio settings and to ignore the mute button on the headset itself to avoid the red light disco.

...the flashing red lights are ridiculously obnoxious and it’s shocking that this cannot be disabled.

The RGB lighting itself could also use some additional love in a future revision of this device. There’s only 4 options available in MasterPlus. “Static”, “Color Cycle”, “Breathing” and “Turn Off”. Both RGB light rings are grouped together into 1 zone and you can't set each ear cup to a different colour if you want to. This is a rather large oversight since users are all about customising things in creative ways these days. 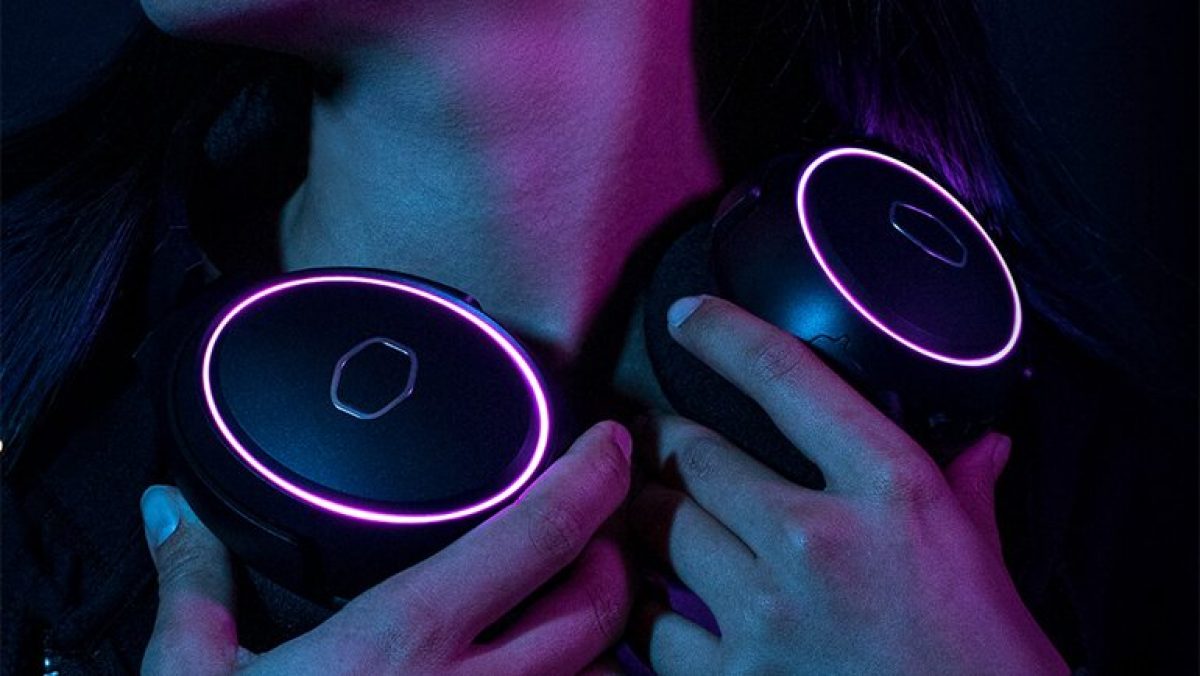 The non-removable cable attached to the left hand side earcup is thankfully braided and has some additional protection added to it near the spot where it enters the headset. This instills some confidence in us that it will last more than a few years without fraying or being damaged from repeated moving. However, should this cable break, there’s no replacing it since it’s attached to the device. A future revision would benefit from a removable cable and maybe some sort of Bluetooth or Wireless capability given the price point.

The MH650 folds up quite nicely making itself even more compact for easier portability. Cooler Master have also thought ahead and included a handy travel pouch for the headset to keep it safe and protected. This feels great and seeing it in the box was a nice plus.

Ultimately, the MH650 is a budget Virtual 7.1 Surround Sound headset that is loud, has a good frequency range and delivers pretty solid sound quality. It’s mic lacks crispness and clarity making you sound as if you’re far away and the 7.1 Surround Sound implementation, while present, is not as great as it could be. At the price point of around $90, users are getting a decent quality product with virtual 7.1 Surround Sound but not one that I can recommend wholeheartedly when there are far better headsets out there which are ever so slightly more expensive.
7