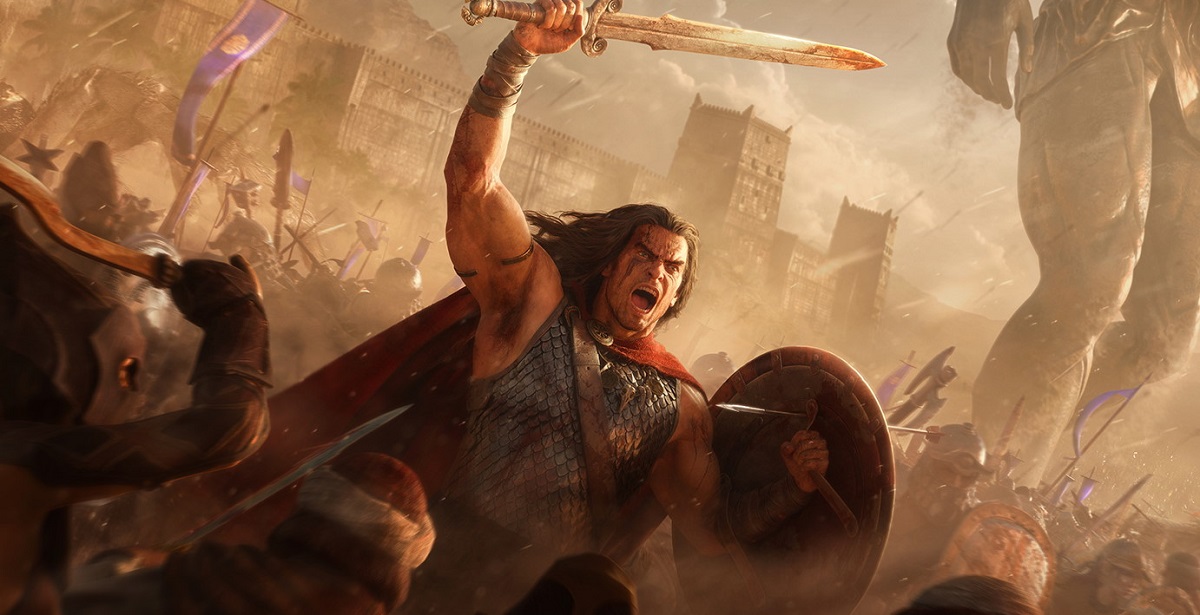 When a message went out on the Slack group asking who wanted to review Conan Unconquered, I think my exact words were “Heck yes!”. Except I didn’t use the word “heck”. I’d had this game on my Steam wish list for ages simply because it was an RTS set in one of my favourite fictional universes – the universe ruled by Conan The Cimmerian, barbarian, thief, and conqueror of the known world. This was my chance to experience Robert E Howard’s universe for myself and have the experience of crushing my enemies, see them driven before me, and hearing the lamentations of their women (ed - apparently comics, not video games, are the problem with society...).

Conan Unconquered is a game in the RTS-mould of They Are Billions; a game made for defensive players. Like most traditional RTSs, you have to build a base, recruit an army, and defeat your enemies; however, unlike Starcraft and more modern RTSs, the game is built around defensive tactics. Instead of having an opposing army following the same rules as you, you are faced with a horde mode. You must set up you base in preparation for waves of attacks. This changes the dynamics quite a bit as a player who would prefer to build a large army of weak, but overwhelming swarm units (the so called "Zerg Rush" strategy) will not have the opportunity to do so here. This game favours players who like to fortify their base, maybe send a few units to scout the map, but ultimately wait for the hordes to rush in. 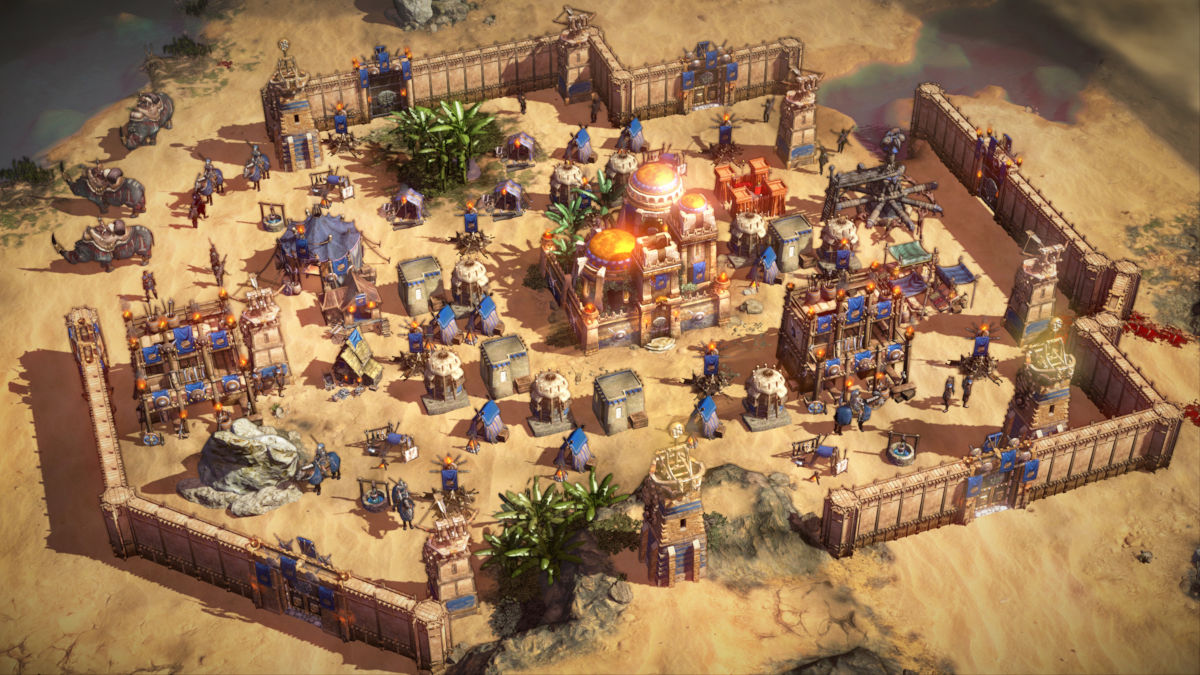 Without fun context, a game like this would be very, very boring, as you basically wait out your opponent until they run out of resources, sending wave after wave against your impenetrable fortress. I’ve plated Starcraft matches against “turtles” that have lasted for what seemed like an eternity (ed - it's a valid strategy !), but only lasted two or so hours in reality. Better players have strategies to deal with such defensive players, and I eventually figured out how to win, but it makes for an insanely boring match (ed - us turtlers call it a component of psychological warfare). Conan gets around this in the exact same way that Gears of War does; the hordes are not dependent on the AI building a base, securing resources, and building an army. They simply spawn in a corner of the map and, after a delay, they make their move.

As long as you have decent defensive measures, such as walls, towers to extend line of sight, and an arsenal of weapons, you'll be ready to fend off the attackers.

Conan Unconquered gives the player several survival advantages. Firstly, you know when and where the attacks are coming from. Your base is always the focal point of the attack, just like in any other RTS, but there is a handy counter at the top of the screen that shows the progress of the enemy hordes as they gather their forces. Once it reached the last stage of five, the horde mobilises and attacks. Secondly, you have the advantage of any besieged force - you are entrenched in a superior defensive position, and ready for an attack. As long as you have decent defensive measures, such as walls, towers to extend line of sight, and an arsenal of weapons, you'll be ready to fend off the attackers. As you know where the enemies are gathering, you can position your mobile forces and the appropriately aligned defences in preparation. 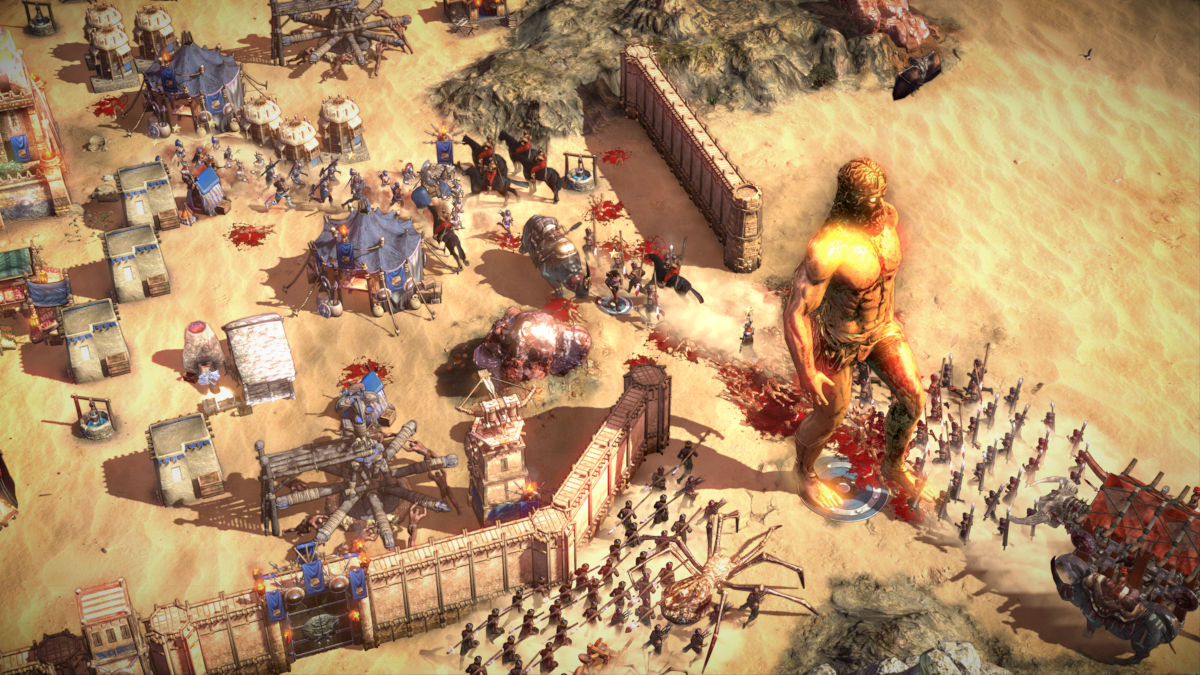 Finally you can pause the game, stack build orders, and take your time in strategizing – just like Baldur’s Gate or other classic CPRGs. This last advantage is one that I kept forgetting about as I tried to play this game like Starcraft, rushing between my buildings and armies, trying to adjust my strategy, while keeping everything I had done (and was planning to do) in my mind. Not so pro-tip: the spacebar is your friend.

Don’t think that the game is easy. Oh no, I have taken a week longer than planned to finalise this review because, from the get-go, the game kicked my arse. If you don’t use the spacebar, don’t prioritise or at least keep an eye on the chokepoints leading into your base, you will be overrun in no time. There’s also the possibility that during the game a sandstorm will whip up, obscuring a horde so that you cannot determine the make up of the force or where they're coming from. The sandstorms will also reduce your visibility and the ability of your units to move to the point of attack.

All that said, the game does incentivise you to explore the map. For one, you can extend your base and cut off paths from which hordes will attack, via base markers, buying you some time to setup or fortify defences, and build more units. There are also resources and treasures to be found and, if you encounter roaming monsters and enemies on the map, you can defeat them to help level up your army units. All of these give you the option and encourage you to send a small force across the map, as every new resource and every unit level, will help you survive each scenario. 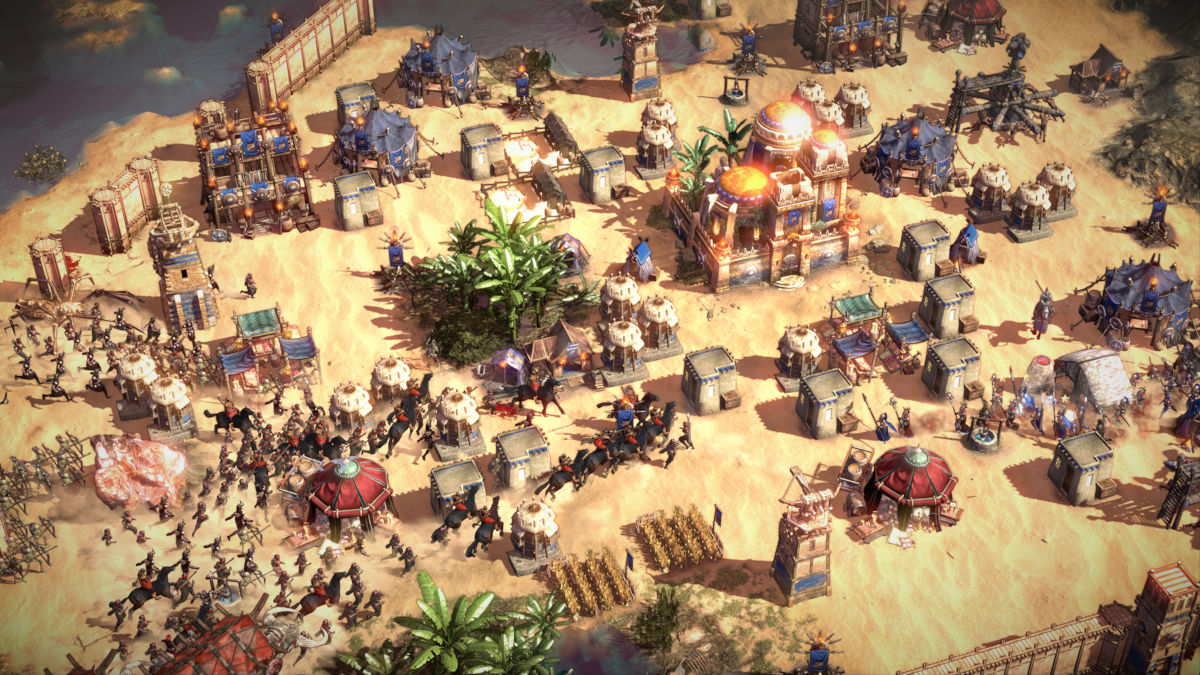 Aiding you in your battles is a hero unit, familiar to anyone who's played RTSs since the time of Warcraft III. At the start, you can choose from three, with a fourth reserved for the players who bought the "Deluxe" edition. I, of course, chose Conan, with a massive sword slash as his special attack. You could choose Valeria, a nimble character who will jump from enemy to enemy in battle; Kalanthes, a spell caster; or the one locked behind a paywal, "King Conan", whose exact abilities I never got to try.

Unfortunately. the game though is not without its flaws. The first is the tutorial mission, or rather the lack of one. You are simply thrown into the game, chock full of mechanics, with just reams of text in tool tips as your guide. This makes it difficult to get to grips with the mechanics and core gameplay loop as you have to hit the ground running. This made for a frustrating introduction to the game and, after close to an hour of gameplay, I lost the first mission, and had to restart the game.

Graphically the game looks great; no matter how far away you zoom, you can still distinguish between units.

Another criticism is the lack of variety in the environments as you progress. The maps start to feel the same, while the units you face and the ones you build also feel generic and samey. This detracts from the otherwise excellent mechanics and may ahve been an element neglected to ensure that the core mechanics were ready for release.

Graphically the game looks great, no matter how far away you zoom, you can still distinguish between units. However, the brown with a splash of green design of most maps gets a bit boring. Given that the Conan mythos ranges from mountain ranges, to deserts, to jungles, and even the ocean, the lack of variety is puzzling.

Conan Unconquered is a welcome addition to the RTS genre as it looks to change things up with a more defensive focus. The flaws in the game are not enough of a problem to stop me from recommending it to fans and newcomers to the genre. In fact, I would heartily agree to any invites for a co-op multiplayer session if you've picked it up.

Magius
@Blaze was just teasing, but I know what you mean. I played XCom on PC and PS4 and the controller was ok, but I often made mistakes when planning routes by clicking on wrong square. That never happens on PC where a mouse is so much more accurate.

Blaze
Personally just have an easier time playing those on PC than consoles.

Magius
@Coffeboy Besides Halo Wars there have been almost no RTS'. Basically without a mouse and KB it is pretty darn difficult to play on controller, with Halo Wars been a notable exception. Having said that the limitations on the game to make it work are notable, I am interested to see how they adapt They Are Billions for console because without KB shortcuts I don't see how you can play these games on console

Lurch
@Coffeboy - They Are Billions, which Lynley references - is coming to consoles soon, and Petroglyph games have released their 8-bit Armies/Hordes/Invaders games on console. There's a chance this could come along but I think the biggest problem is RTS games (especially PC ports) get almost no fanfare on release.

Blaze
@Coffeboy Usually I find RTS games a bit annoying to play with a dualshock controller. XCOM 2 was a big exception for me. But yeah, consoles generally lack good RTS titles.

Coffeboy
man i wish they would release more RTS games on PS4 ..