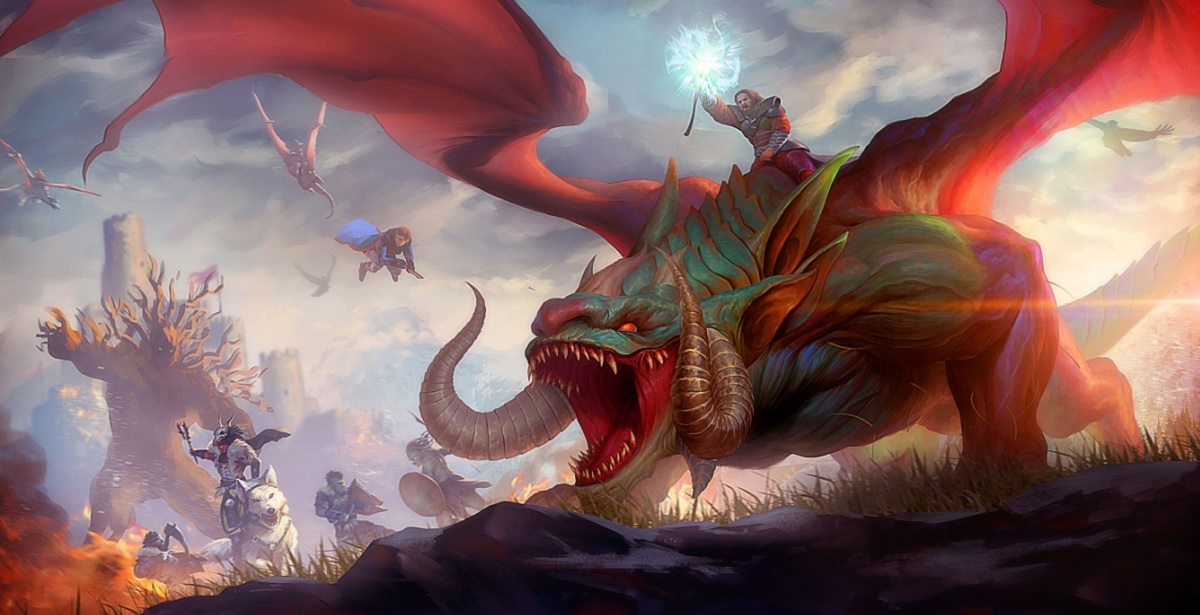 Citadel: Forged With Fire is the latest in the long run of crafting/survival games that have taken the gaming community by storm since the release of Minecraft. Coming into a genre that is overcrowded with the same gameplay mechanics, does Citadel do anything unique enough to set it apart from the likes of Conan: Exiles and ARK: Survival Evolved?

At the beginning of Citadel, after creating your character with some basic options, you’re literally born in fire as a new wizard in the land of Ignus. Choosing your starting location from one of three “towns" – really just an almost empty safe zone castle – you’re free to either speak to one of the few non-monster NPC’s that fill out the world for an introductory tutorial or just to spelunk you’re way into the wild and figure it out as you go along, a couple of wiki searches notwithstanding. 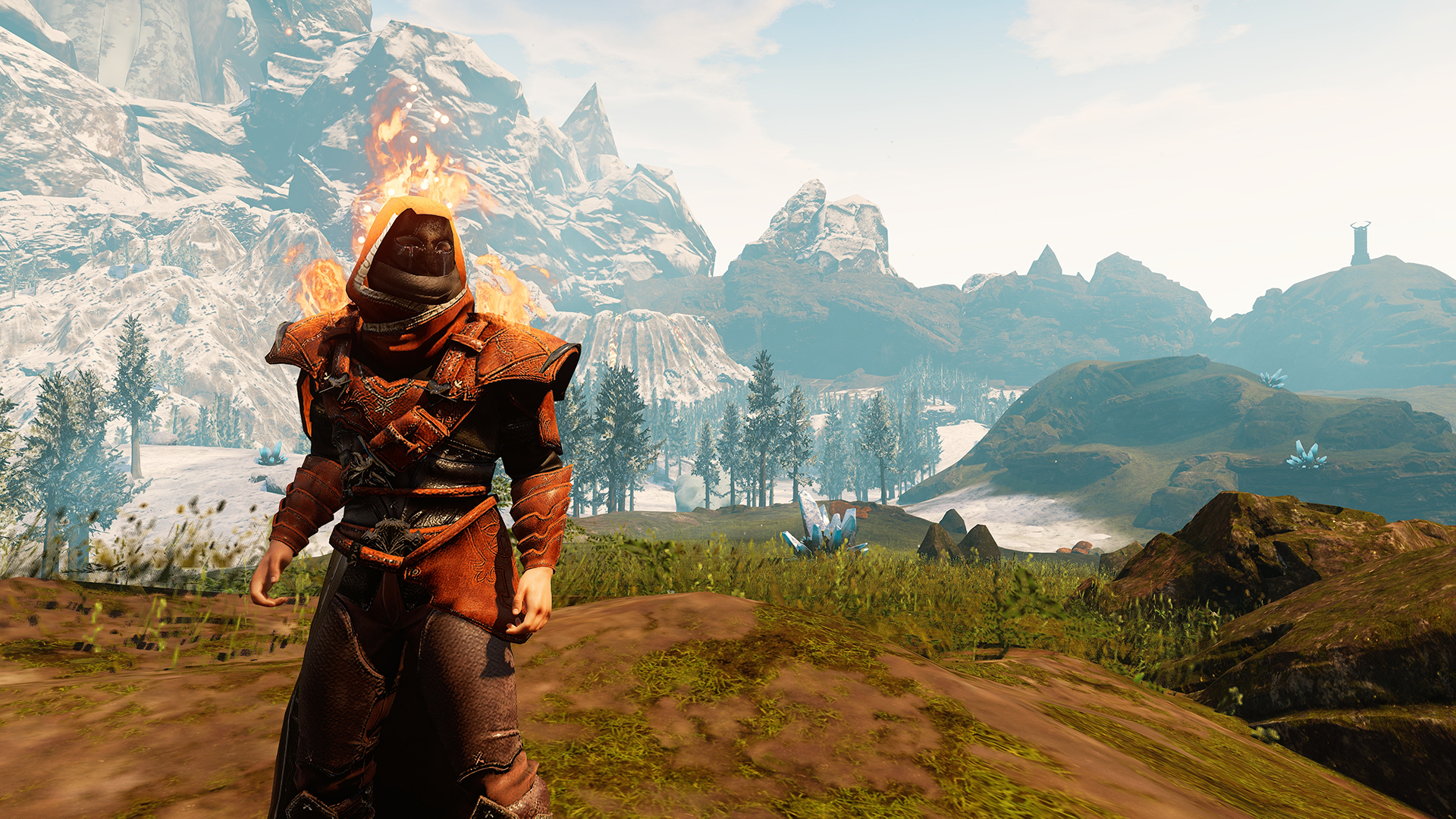 If this sounds familiar to you then congratulations, you know exactly what you’re in for as Citadel does very little to change up the gameplay formula of these crafting/survival games.

As with ARK and Conan, you can choose to play the game solo, in which you can customise the experience to your liking, or jump online to either play the game in PVP or PVE mode. Going into solo mode the first time you play is the best idea as you’ll learn the games mechanics before attempting one of the many PVE or daunting PVP servers. Solo mode, though, is nowhere near as customisable as ARK, for instance. You can increase your XP gains per action, removing the need for resources to build and up your damage output, but you can’t change the enemy damage or time to tame, for instance. Meaning that even in solo mode, enemies do the same damage as you would find on one of the games official servers.

The first thing you’ll notice once you’ve entered the virtual land of Ignus, is just how beautiful the game actually is. Running on the Unreal Engine 4, Citadel is easily the best looking crafting game I’ve played so far. The land of Ignus is a pristine, natural environment, unhampered by the constraints of civilization or its ugly footprint, something you’re about to change. There are lush valleys, overarching canyons and snowy retreats. It’s a damn shame that you’ve come along to ruin all this natural goodness with your castles and the like! 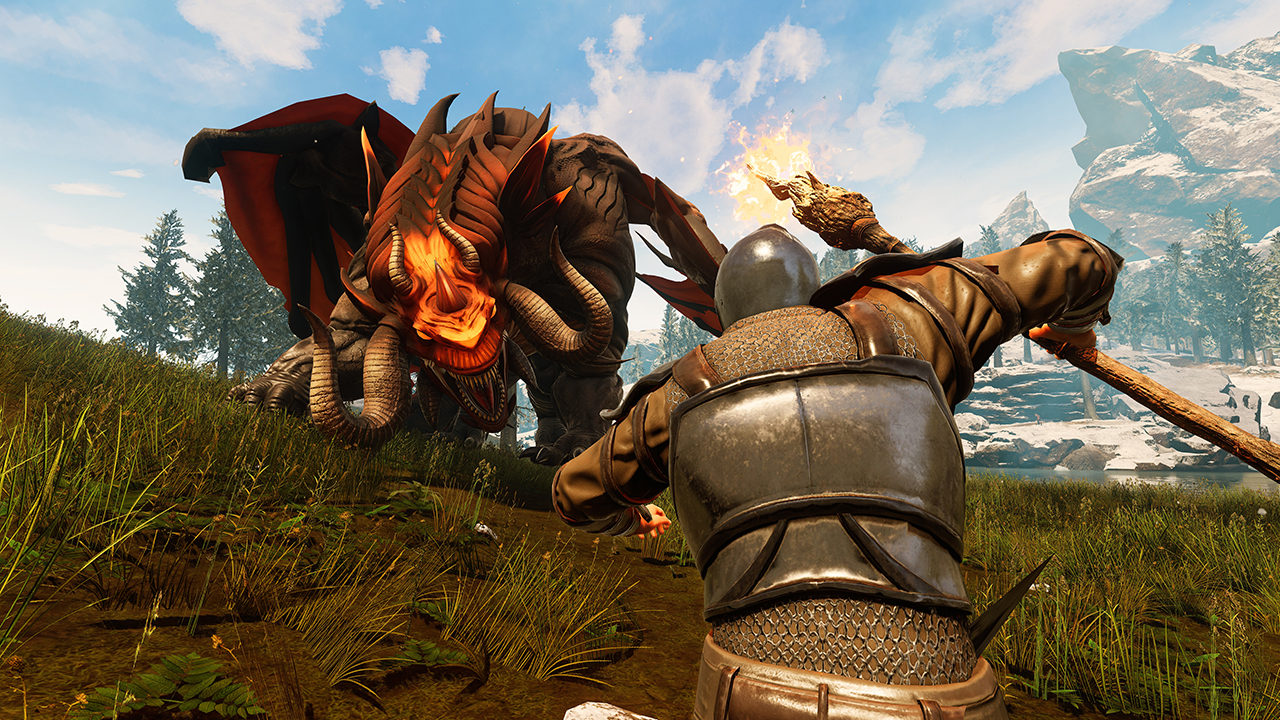 The next thing you’ll notice is just how well Citadel actually runs. Despite the occasional couple of seconds of freezing – which was either the game saving or streaming in a section of the world – Citadel ran extremely smoothly. It is, by far, the best performing crafting game I’ve played that’s using Epic’s beastly UE4 engine and that’s saying a lot. The only other noticeable slowdown issue came when crafting more complicated structures and using clearly higher poly objects to place down into the world.

Citadel jumps deep into the fantasy pool. There’s a smattering of Skyrim combined with Harry Potter vibes that the game has going for it. The land is full of the usual assortment of creatures such as hare, boar and horses, but also full of giant eagles, orcs, direwolves, creatures that look like Dementors, dragons and unicorns. And it’s your calling to either kill them or enslave them. 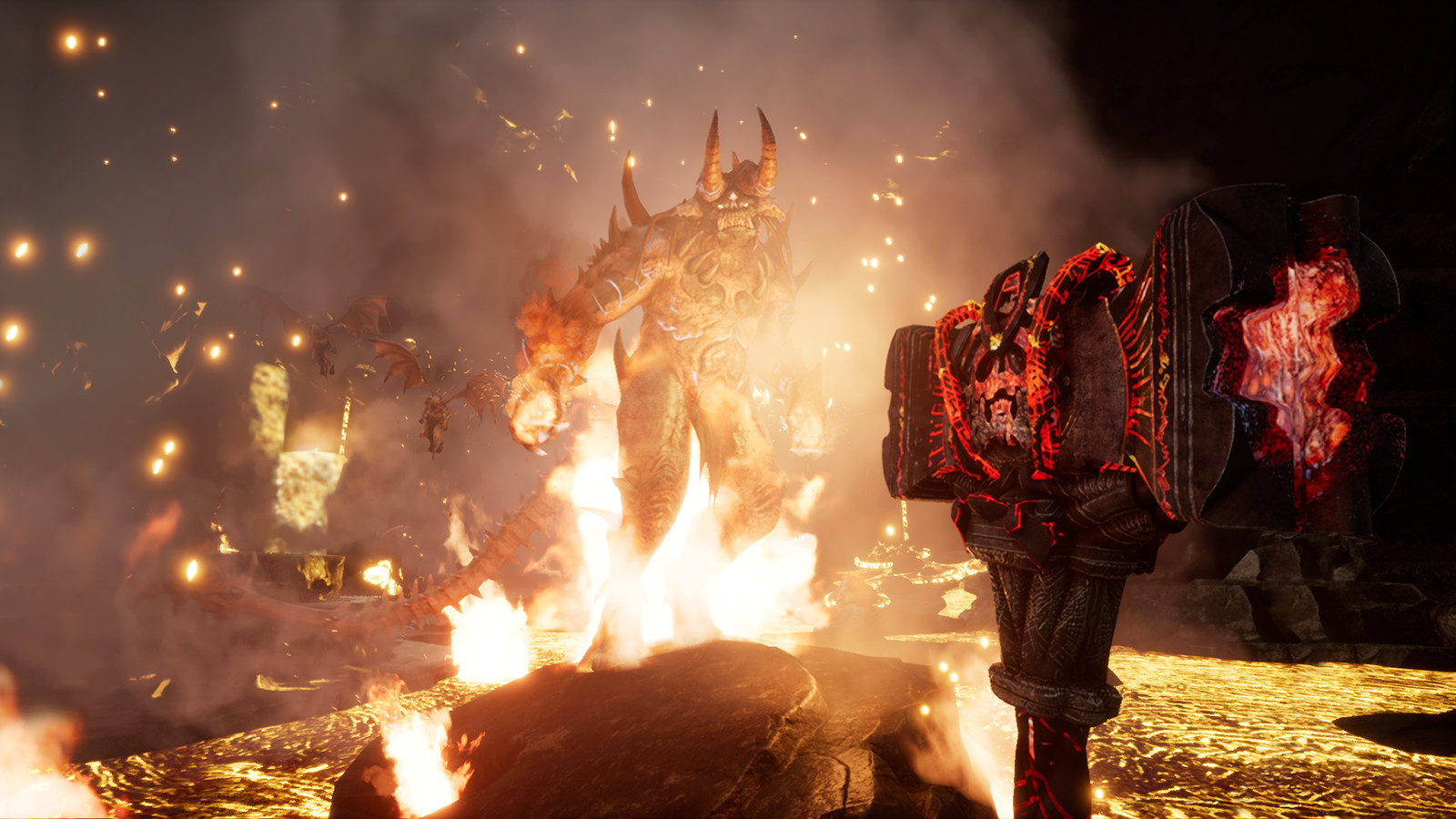 But what is the reason for all of this? Is there one?

Not really. Unlike most crafting games that provide some form of world story through journals and the like, Citadel has nothing. The tutorial NPC is thoroughly useless at actually teaching you anything and the NPC quest givers around the lower half of the map only provide you with Daily Quests for resources. Basically you’re a wizard/golem sort of creature (another thing the game tells you nothing about) and it’s your job to build the best damn castle anyone’s ever seen. Wiki is going to be your best friend for a bit. Story notes, supposedly, are on the developers development list. Right now the basic gameplay loop is harvest, craft, kill - and the game doesn’t do much more than that, at least in solo play.

Unlike most crafting games that provide some form of world story through journals and the like, Citadel has nothing.

Citadel does have some nice enhancements. The need to eat or drink has been removed from the game and the user interface is clean and easy to navigate. As a wizard, spells are your main form of offence and what spells you can create are based upon what weapon you’re crafting them to. Spells can also be enhanced by potions so you can stack a life drain effect to that storm AOE you’re hurling at everything. Foolishly though, if you’re using both your L2 and R2 buttons for spells, you won’t be able to melee anything. Luckily you can carry more than one weapon at a time. 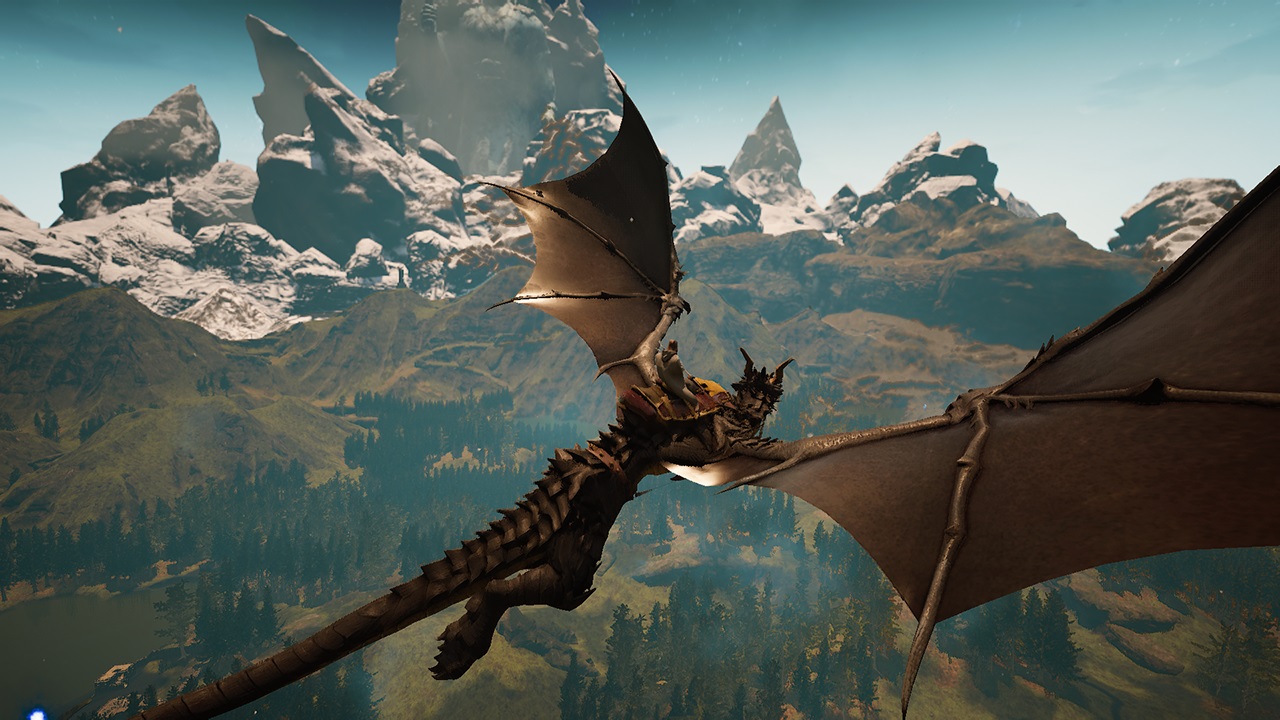 The game's biggest change is to movement as you can craft yourself a broomstick and fly around like Harry Potter and his mates. In fact, you can actually create the goal posts for a flight-based sports game. Quidditch by another name. Of course in solo mode it’s useless but the online modes have leagues and tournaments. And quite frankly, I’m not sure why other games with massive overworlds don’t allow flight, as it’s the best way to get around and fulfill your death from above dreams on unsuspecting orcs. Just be prepared to stock up on mana potions as flight and spells consume it. For Rohan!

Unfortunately the game's AI is questionable at best. Most of the time they clustered around and allowed me to whammy the snot out of them with an AOE and other times they seemed to remember they had crossbows and were capable of firing them.

...you can craft yourself a broomstick and fly around like Harry Potter and his mates.

Animation is a hit and miss affair with both the NPCs and your character if you choose to play in third person. Sometimes the AI will stand around dumbly or move to you without a single frame of animation playing. And the less said about the... disturbing flight animations when you’re on your broomstick in first person, the better. Hint, the tip... wiggles... Enemy damage output is also ridiculously high. A few shots can kill you easily and when you die you drop all your inventory except for what you have equipped and need to reclaim it before you peg again. Be prepared to die a lot, whether online or off. 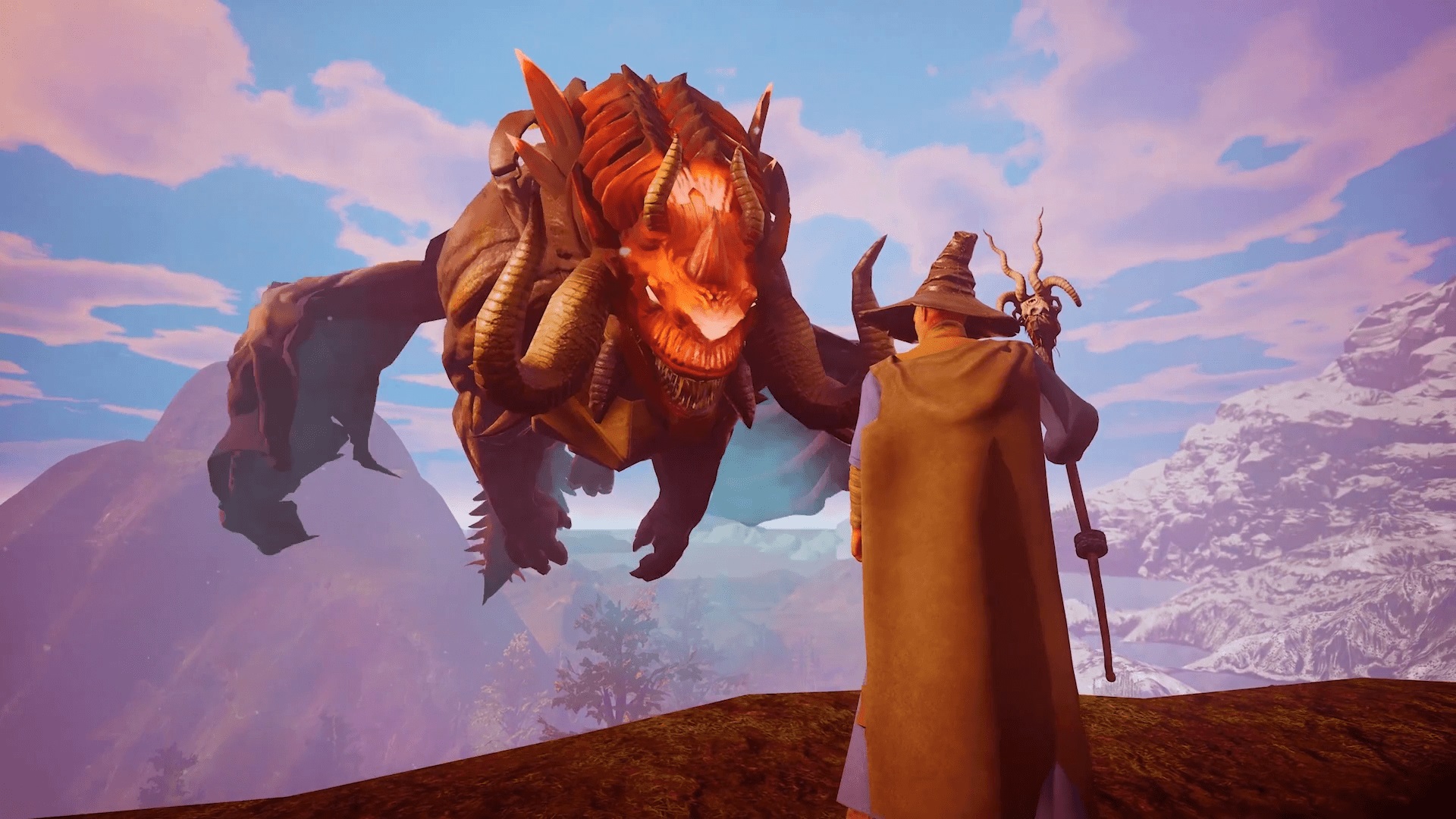 There are three dungeons and world bosses, but what their story is, if any, I have no idea. Again, wiki is your friend here just to figure out how to get into them.

If you’re playing online, prepare to sink a lot of time into the game and its harvesting mechanics. As usual, swinging your axe at everything nets you resources and you’re going to be mining the hell out of the world. At its default setting, I was surprised at how much resources was required to build even the simplest things. Chopping down ten trees for instance only allowed me to build six walls. And if you’re planning on building a really massive, complicated structure, then you’re going to harvest the world like it’s going out of fashion. Pro-tip, flying isn’t just a handy way to get around the world, but the best way to build your various homes as well.

Even on a packed PVE server, I found myself wandering the empty landscape by myself...

Right now Citadel is heavily reliant on the concept of emergent gameplay, and the need for people to both team-up and take down other players. The designers want you to play PVP, to build up great Houses and take the smackdown to opposing factions while dealing with inner strife. Judging by the amount of packed servers, Citadel is pretty popular, but whether or not a Game of Thrones was unfolding around me, I can’t say. Even on a packed PVE server, I found myself wandering the empty landscape by myself, with the only shout out to other players from the abandoned early homes that dotted the landscape. At this point in time, it’s clear everyone was off in the higher level areas of the world, which made catching up with anyone in a quick time frame a daunting task.

As beautiful and well-optimized as Citadel is, its basic gameplay loop got tired and repetitive by the first 30 levels. Having to grind my way to 60 to enter the dungeons became a bit of an ardous task as more killing, harvesting and crafting was required to get me there. And as much as I like crafting games and building massive structures around me, there needs to be more than just that. I can put up with the questionable AI, janky animations and the feeling that you’re not connecting with anything you’re swinging your axe at, but I can’t put up with a grind that doesn’t have an endgoal beyond constructionist supremacy.

There’s a beautiful environment here, and a lot of promise if developer Blue Isle Studios can implement an actual story along with the raft of additions they still have planned. In a couple of months perhaps, like No Man’s Sky, Citadel will have evolved forward, making coming back to it to see what’s changed a must, but right now, if all you need is to build and kill, then Citadel will easily fill that need. But if you’re looking for something more, then check back later.
5

Do, and build, as you please

Spending too much time on how-to-do-things wikis 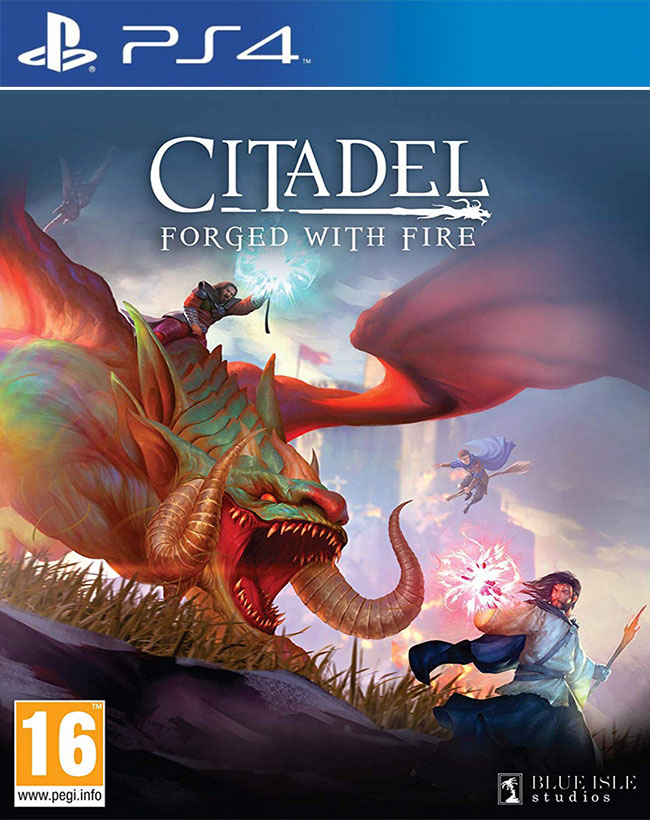