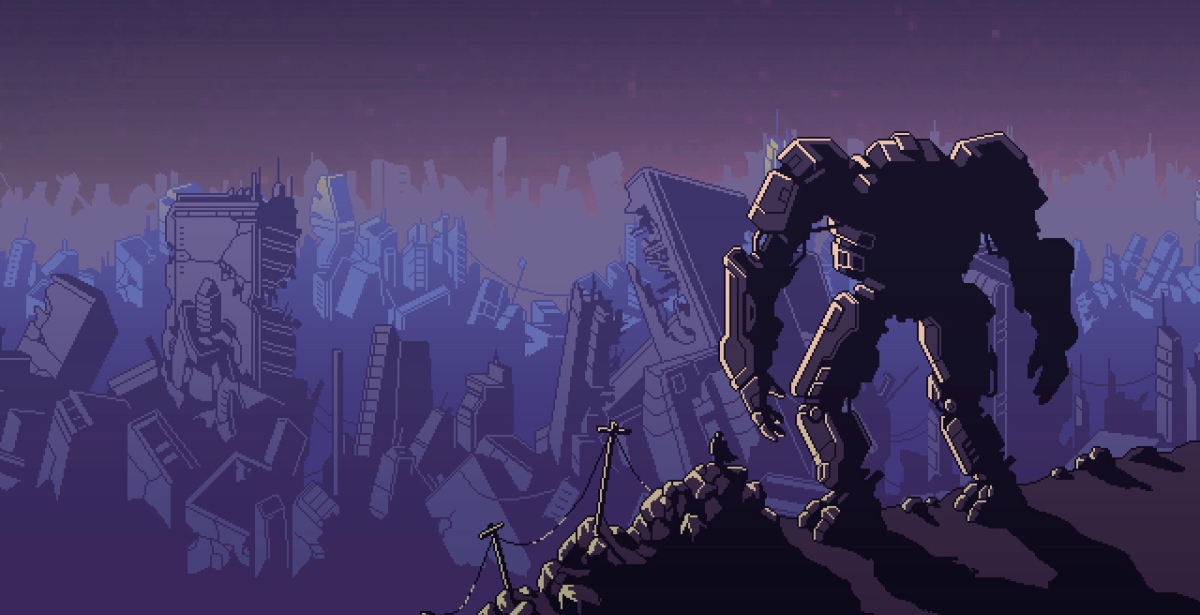 The world is lost. The strange creatures known as the Vek have infested and ended every last bastion of human resistance. It may be the end of this world, but there is still hope for another. We can send a pilot through the times tream to another world and try stop this from happening... again.

As far as simple introductions to games that set the scene and mechanics go, Into the Breach has to have one of the better ones. With your time traveller chosen, you take command of a basic set of giant robots as you seek to save another timeline from the equally large Kaiju inspired Vek. And hey, you’ll likely fail on your first go, but that’s alright, you’re never going to save ‘em all. There is always another time stream that you can send your best pilot to, only to repeat the process of trying to fight off the Vek and unlock enough resources to attempt the final mission and save that world. 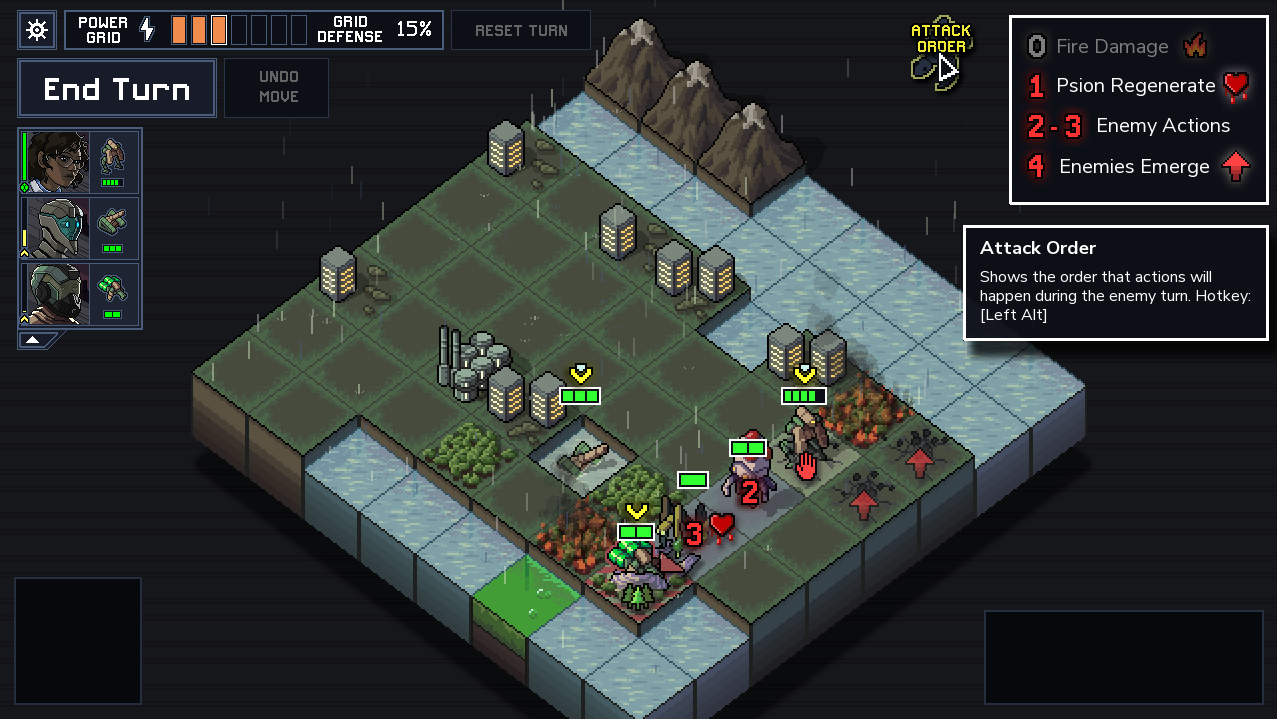 But that’s getting ahead of ourselves so let’s dial it back a bit to go over what commanding your group of mechs actually entails. At the start of each of your world saving runs you’ll be able to select a group of three mechs to fight off the alien threat. These mechs can either be part of a pre selection of themed robot teams that naturally have some sort of synergy, but can also be selected to make a custom team to suit your needs.

Being a roguelike, you won’t have access to all the mechs at the start of the game, with new teams being unlocked by successfully completing achievements to earn stars to buy new teams between runs. These achievements are usually pretty easy to knock off in one or two runs with a given team and each team has 3 for you to go through. With the basic teams costing as little as 2 stars you can quite quickly unlock all the mechs and start trying out more custom teams as you see fit.

On top of this progress you’ll encounter more named unique pilots from various time streams that crash down during missions. If you manage to save them, you’ll be able to start levelling them up for use in other runs. These unique pilots come with their own perks like making any mech they pilot fly, starting the game with a shield, or being able to move through enemy units. There are a number of these pilots out there and building one that suits your style of play to use across different runs can be quite rewarding. It can also be quite soul crushing when you forget to move them off of a one shot kill and lose that version of them before having to start over with that particular mech type. 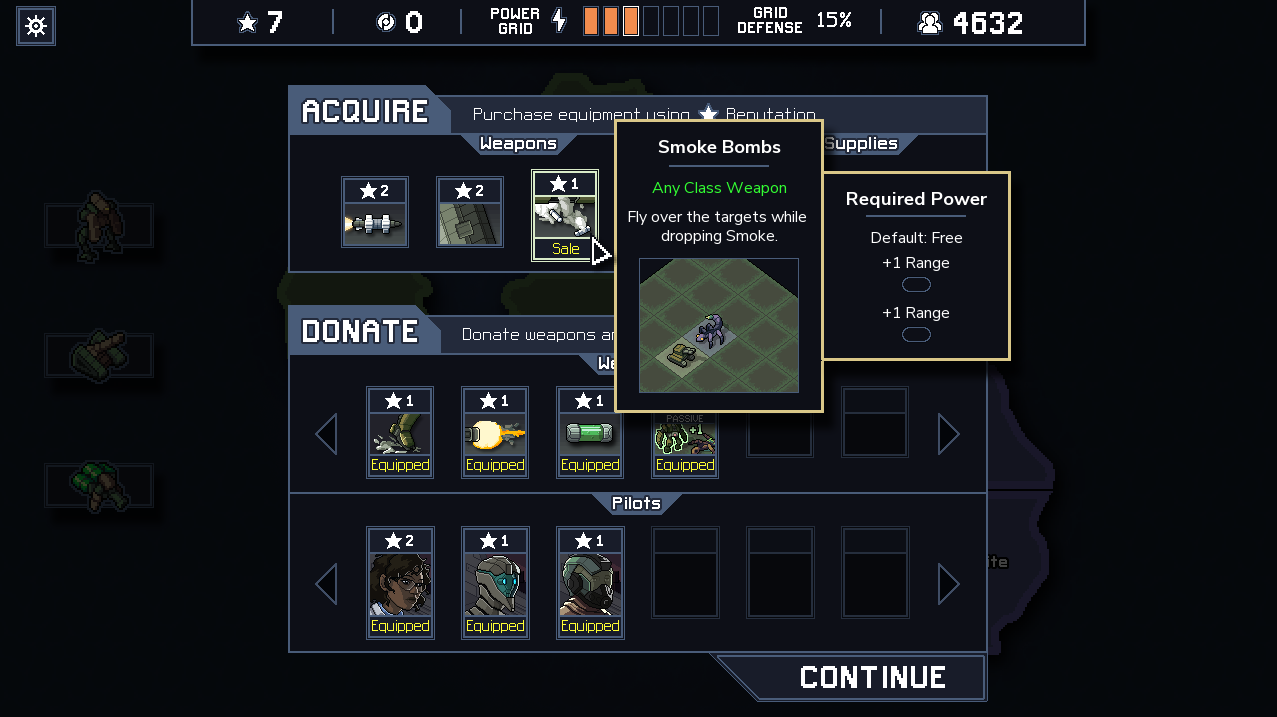 With your teams assembled, you’ll head out to save at least 2 of 4 islands, each with their own theme and hazards, before attempting to end the Vek threat on their Volcano island lair. At first you’ll only have the pleasantly green and city filled Archive island to do missions on, but as you complete islands in a given run you’ll unlock the other three. Those being a desert, ice, and junk area respectively. Each has their own unique mechanics, whether it be air support, earthquakes, conveyor belts or blizzards. You’ll find yourself enjoying one or two over the others but a complete run will need you to hit each.

On an island you’ll be presented with a number of zones to go out and protect or reclaim, each with bonus objectives that could reward you with better resources or integrity to your power grid. Deciding on which route to take can influence how ready you are for the final boss of an island and further the final mission. With your region selected, you’ll drop you mechs down from above onto the isometric grid and proceed to combat the Vek, seeking to either wipe them all out or to survive a number of turns before they retreat.

The Vek, for their part, will be trying to either kill your mechs or the buildings, residences, power plants or trains on the map. As mentioned, you have a certain amount of power left in the grid for all humanity, and when this bar is depleted, it’s game over - for this world anyway. Different Vek have varying abilities that you will need to learn and find ways to counter, with auras and specific bosses adding new considerations to these battles as well. 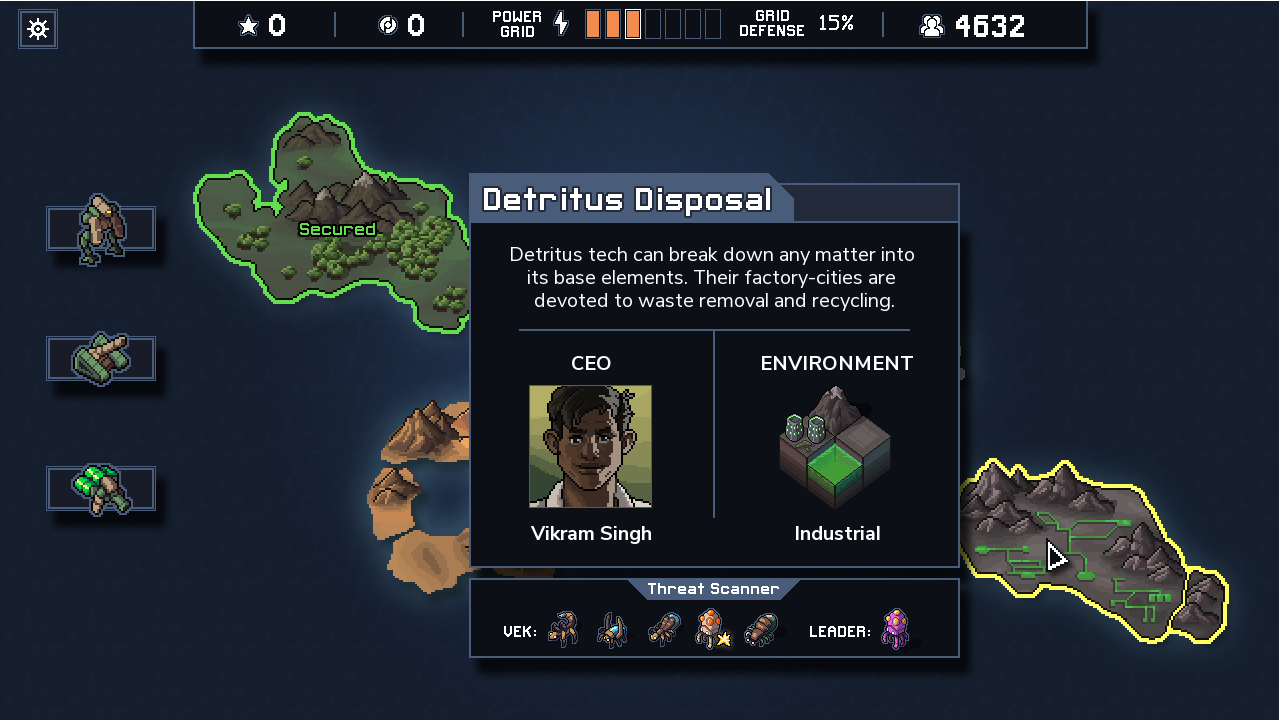 The Vek actions are 100% shown to you between rounds, meaning you will always know where they are attacking, what you can do to them and where they will end up or spawn. Because of this, you need to plan your turns effectively and make sure to be as efficient as possible or you will soon be overwhelmed. Often a mission will devolve into damage mitigation as you work out what you can afford to lose before the mission ends, rather than actually "winning". With the way the AI is written, there will almost always be a way out, you just need to put your mind to it and with one turn, reset. Thanks to your time manipulation per battle, you get more than a little help in this regard.

With all but three regions saved on an island, the Vek will attack the ruling corporation’s HQ and you’ll go into a special mission with a boss Vek to deal with and if you do well enough, you’ll end the mission with enough reputation - one of the resources gained in missions - to buy upgrades to your mechs to ready you for the next island. Once you have saved at least 2 islands you can take on the final mission which is always the same but scales to your gear and pilot experience level to make sure it’s always a touch and go affair.

Overall I have very much enjoyed my time with Into the Breach. The pixel art style and isometric strategy battles remind me of all the good parts of games like Final Fantasy Tactics. Subset Games have a lot of experience in developing rich roguelikes with previous title FTL standing out and they’ve used that experience to blend with this strategy game to make a game that is definitely worth a look.

Interesting implementation of roguelike gameplay in a strategy game

Some difficulty spotting hazards on maps