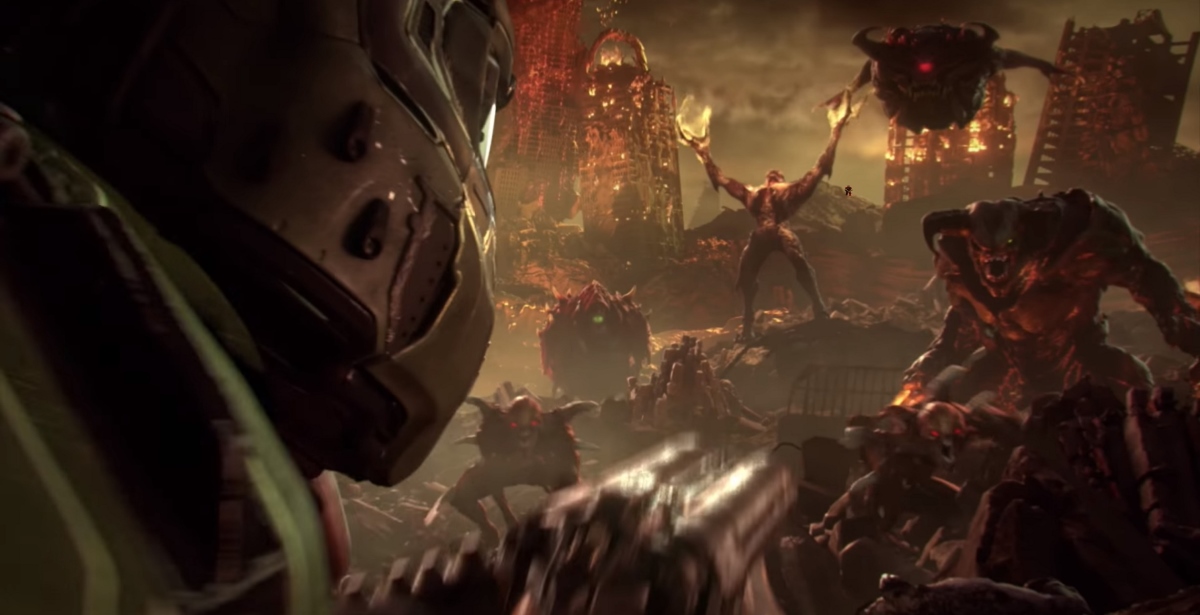 Bethesda and developer id Software recently unveiled extensive new gameplay for their upcoming shooter, DOOM Eternal, the sequel to 2016's DOOM reboot. The gameplay (finally) takes us to Hell on Earth... and in space. You can watch the gameplay below:

DOOM Eternal appears to be a natural evolution of its predecessor, still retaining that same brutal, hyper-violent gameplay that we've all come to expect while building upon it in many unique ways.

id Software took the stage to present all the new changes that will be present in the game. Our protagonist, the Doomslayer, has probably hit the gym a few times since we last saw him, appearing far more buffed up than before. He also possesses a blade on his left hand that he frequently uses in improved and varied new glory kills. There will also be far more enemies this time around, some reimagined from the classic game while others are brand new, including one called the "Marauder" which was teased to have some connection to the Doomslayer.

The gameplay, like our main hero, also got beefed up in the gore department as well as vertical combat. The maneuverability in each level promises some incredibly fast-paced, refreshing verticality as Doomslayer can now use a grappling hook to zoom around a stage. The layout, which pretty much confirms that Earth has become a wasteland due to the merging of Hell, features several branching paths and plenty of opportunities for old-school platforming... in the Doom kind of way.

The game also teases plenty of new enemy bosses (or mini-bosses) that you will encounter across the campaign. However, id Software also revealed that players can now enter any other player's campaign as a demon, adding some unpredictability to each playthrough. It could potentially be a fascinating new multiplayer edge that doesn't take the focus off of the game's strong point, being the single-player campaign.

DOOM Eternal currently does not have a release date, but we're predicting a 2019 release window. In case you want to catch up on some great deals from the line-up of QuakeCon games, Steam will be running a QuakeCon sale this weekend featuring 2016's DOOM, Prey, it's DLC Mooncrash, Fallout 4 GOTY Edition, Fallout: New Vegas, Wolfenstein II: The New Colossus, The Elder Scrolls Online, and much, much more.

KnightFall500
My soul is ready!