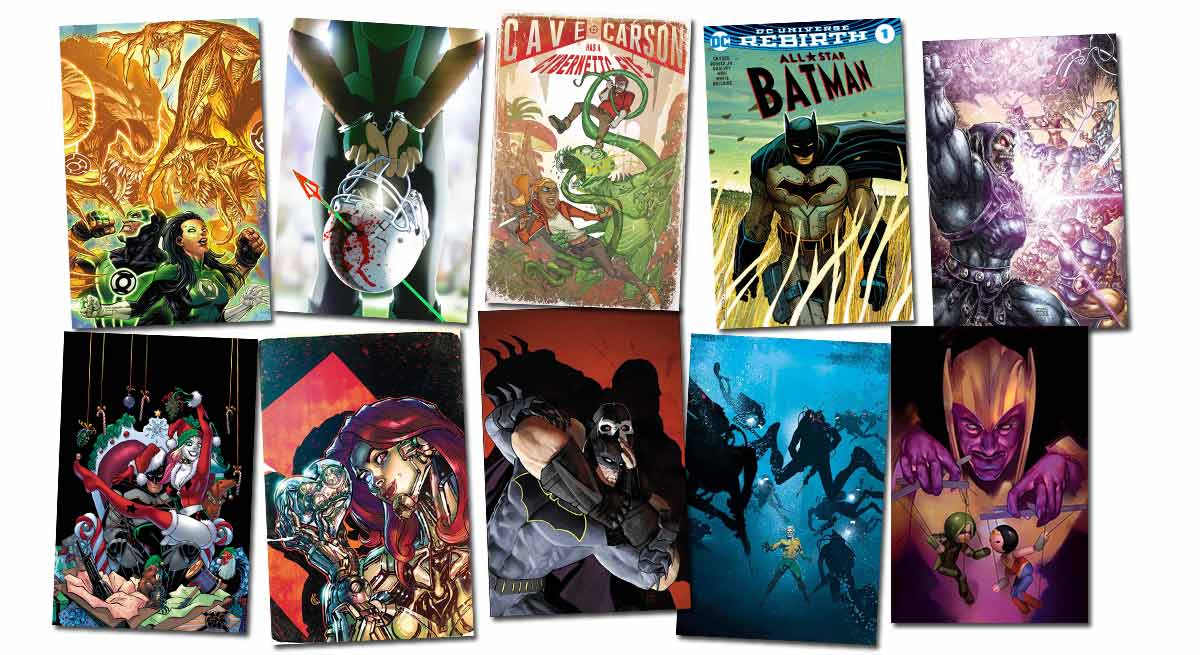 All Star Batman #1 Director's Cut arrives in a pencil only variant that lets you get a glimpse of the amount of work beneath all those fancy inks. DC's next big event launches this week as well, with Justice League Vs. Suicide Squad #1. The League finally discovers the existence of Waller's Suicide Squad, and you know no one is going down without a fight! Get 'em first at DC and Vertigo.

Superstar writer Scott Snyder explodes into an all-new Batman series alongside legendary artist John Romita Jr., in this pencils-only DIRECTOR’S CUT of the smash-hit ALL STAR BATMAN #1. Batman must take Two-Face to a destination outside of Gotham City, but the duplicitous villain has a two of spades up his sleeve. Every assassin, bounty hunter and ordinary citizen with something to hide is on their tails with one goal: kill Batman! Handcuffed together on the road to hell, this is Batman and Two-Face as you’ve never seen them before!

“THE DELUGE” part two! The war between the United States and Atlantis takes a turn for the worse when the U.S. activates its newest weapon to assassinate Aquaman and dismantle his undersea kingdom: the Aquamarines, super-soldiers who have been biologically enhanced to combat the abilities of any Atlantean.

“I AM SUICIDE” conclusion! Batman and the remains of his team come face to face with Bane and the Psycho-Pirate in a final battle at Santa Prisca—and learn whether this was truly a suicide mission!

Cave Carson Has A Cybernetic Eye #3

Cave and his ad hoc team of spelunkers (his daughter Chloe and best-bud mechanic Jack Wheeler) have answered the call to adventure! But as they search for the lost city of Muldroog, Cave’s employer sends a crack team of his own in the latest in subterranean transportation: the Mighty Mole MK 2, led by a famed explorer from Cave’s past. And it looks like they’re out for more than just the return of EBX property...
This issue features a variant cover by Paul Rentler that combines with this month’s other variant covers from DC’S Young Animal to form a single image.

“BIONIC BETRAYAL!” Captured and at the mercy of a terrorist cell, Cyborg must escape to prevent a powerful traitor from within S.T.A.R. Labs from using top secret alien technology to invade the Pentagon and unleash a new world war by seizing control of the nation’s most powerful nuclear weapons.

“EMERALD OUTLAW” part two! Snow falls on Seattle as its mayoral race heats up with a rash of murders that implicate a deadly archer. As a city wonders what’s become of its Emerald Archer, Green Arrow and Black Canary race to rule out their prime suspect: Emiko Queen.

“THE PHANTOM LANTERN” part five! The Phantom Lantern controls all aspects of the emotional spectrum, but can Green Lanterns Jessica Cruz and Simon Baz figure out which of those powers can also defeat their new enemy?

Come spend the holidays with Harley in issue #10’s collection of wintry short stories—just don’t expect to make it to New Year’s in one piece!

The ThunderCats team up to combat a new foe: Skeletor! And as young King Lion-O battles this evil from another world, he distracts Skeletor from an important fight against Mumm-Ra. With the Power of Grayskull hanging in the balance, who can possibly turn the tide of battle?

When a violent protest against Superman’s regime breaks out on the streets of Gotham City, Sinestro arrives to put down the participants by any means necessary. But the timely appearance of Wonder Woman and Green Arrow from the parallel Earth prevents a possible slaughter. Meanwhile, on the streets, Harley and her gang plan to use the cover of the riot to strike a blow against Superman…until parallel Earth Batman shows up!

“OUTBREAK” conclusion! Beaten, battered and outnumbered, the Justice League faces utter annihilation when Amazo and a host of the team’s deadliest enemies are released from prisons around the world as part of one man’s revenge against the world’s greatest superheroes.

The first major event storyline of DC’s Rebirth era begins with a day Amanda Waller always knew would come: the Justice League discovers the existence of the Suicide Squad! This government-sponsored black-ops team of super-villains with bombs implanted in their brains is obviously a deal-breaker for Earth’s paragons of truth and justice! But you can bet that the Wall and her Task Force X won’t go down without the fight to end all fights as this weekly series gets underway! 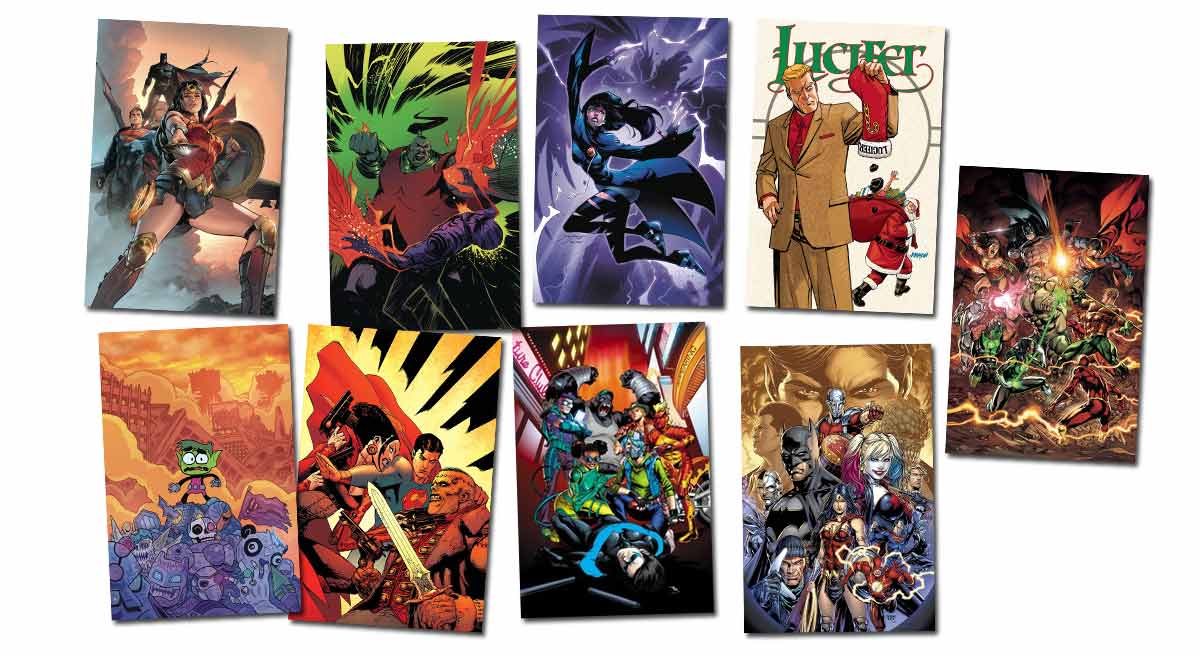 It’s a LUCIFER holiday special! Forget coal—this nice ’n‘ naughty issue is your reward for a year of indulgent misdeeds with the devil. Writers Holly Black and Richard Kadrey team up to deliver a darkly festive and irreverent ode to the joy of seasonal sin and twisted Secret Santas. We’re keeping this one under wraps, but rest assured it’s Krampus-approved.

“BLUDHAVEN” part two! They call themselves the Run-Offs! And now, this group of villains that Batman and Nightwing ran out of Gotham City plan to do the same to the former Boy Wonder! But can he find the serial killer terrorizing the city before the Run-Offs catch up with him?

“THE WHITE CARNIVAL” part four! When a strange new group of masked villains takes credit for the glowing orb and holds the entire city of San Francisco for ransom, Raven is forced to confront them head-on! Are they any match for the daughter of Trigon? And is there more going on here than meets the eye?

El Diablo, Azucar and Xolotl fight a Suicide Squad reloaded! It’s a bad-guy battle that only gets more complicated when the heroes arrive! El Diablo and his friends barely escape only to be trapped by Deadshot! And, in a tale starring Amanda Waller, the Wall is back in her role as deprogrammer and tasked with cracking a catatonic agent who has vital intel on the Squad’s current mission. The clock is ticking when Amanda finds herself exposed to a toxin that may take her, and the whole team, down the rabbit hole.

“SINISTER PURPOSE” part two ! Here comes the Bride and her four arms are loaded with weapons. And on what side of those guns is Lois Lane going to be? The mystery of one of the citizens of Hamilton will be exposed with monstrous consequences for all.

The prank war to end all prank wars has erupted in Titans Tower, but for some reason, Beast Boy seems to be out-pranking everyone—he even dodged Cyborg’s barrage of stankballs. It’s like he knows what pranks are coming before they even happen. That’s because, unknown to the other Titans, Beast Boy has a new power: he can smell into the future! But what happens when Beast Boy gets a whiff of…the apocalypse?!

“BETTER TOGETHER” part four! The trio’s tribulations have turned the Black Mercy’s gift into a world of nightmares that give birth to a horror that can only be called the White Mercy. And what scares Batman, Superman and Wonder Woman could destroy the world!