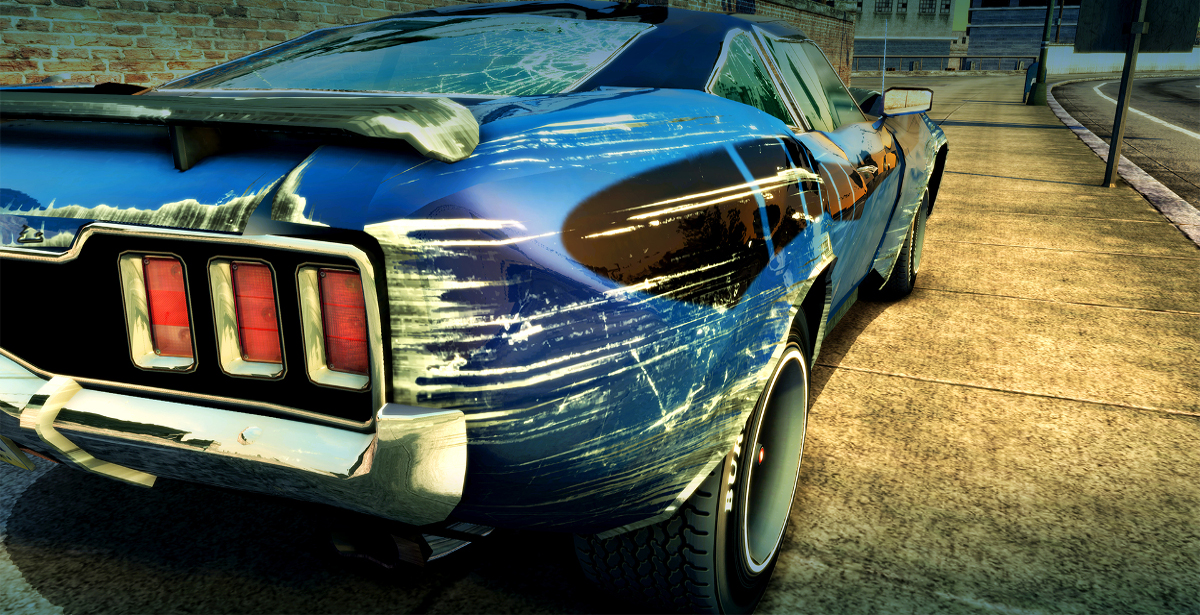 I had heard many great things about Criterion’s early arcade racers so when EA surprised us all with a remaster of the PS3 instalment, I jumped at the chance to finally try my hand at racing around Paradise City. I was curious to discover if the remaster lived up to the reputation built over the PS2 era and continued in the PS3 era.

The game throws you immediately into the craziness of its world with Axl Rose screeching out Paradise City over the loading screen. This sets the stage for a game full of high octane insanity, promising much, but ultimately ending up as a one note game filled with speed and crashes. 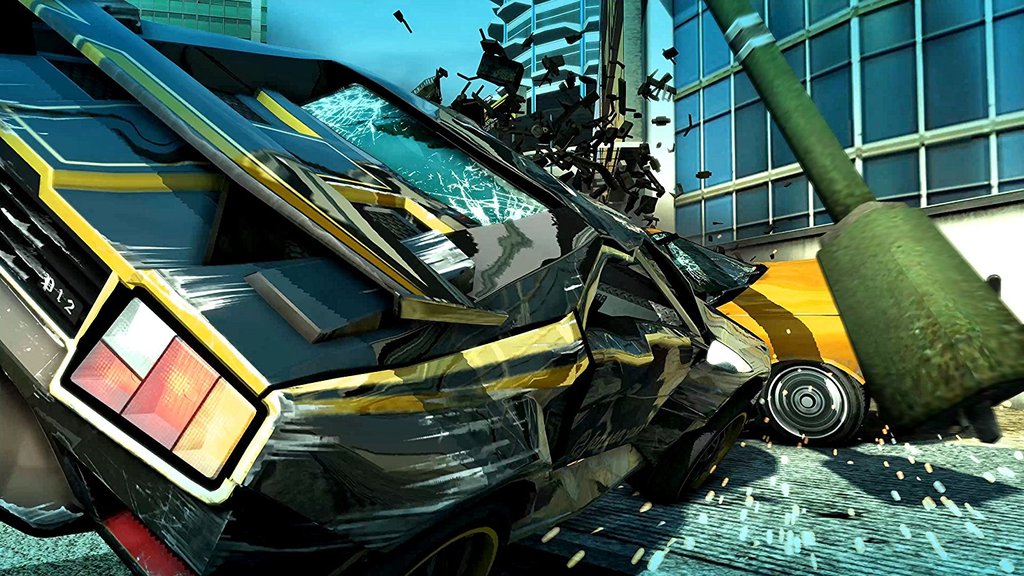 Once you get past the loading screen you are immediately dropped into a muscle car, completely damaged and tasked with finding a garage to fix it. This is the first mechanic that is not tuned and thus fails to live up to its potential. Fixing your car is a simple matter of driving through the garage, pit penalty style, and your vehicle is wondrously fixed. Modern arcade racers make a slight concession to reality by having you accumulate in game currency which you have to spend to repair your vehicle.

That leads to the second undeveloped issue with this game – the lack of any tuner or upgrade options for your vehicle. Quite simply the game forgoes any idea of off-track depth to get you into the action immediately. This is great for a quick race - a short drag race to kill time between more in depth games - but as a mechanic it is unlikely to keep players, serious racers and those looking for fun, engaged for any length of time. 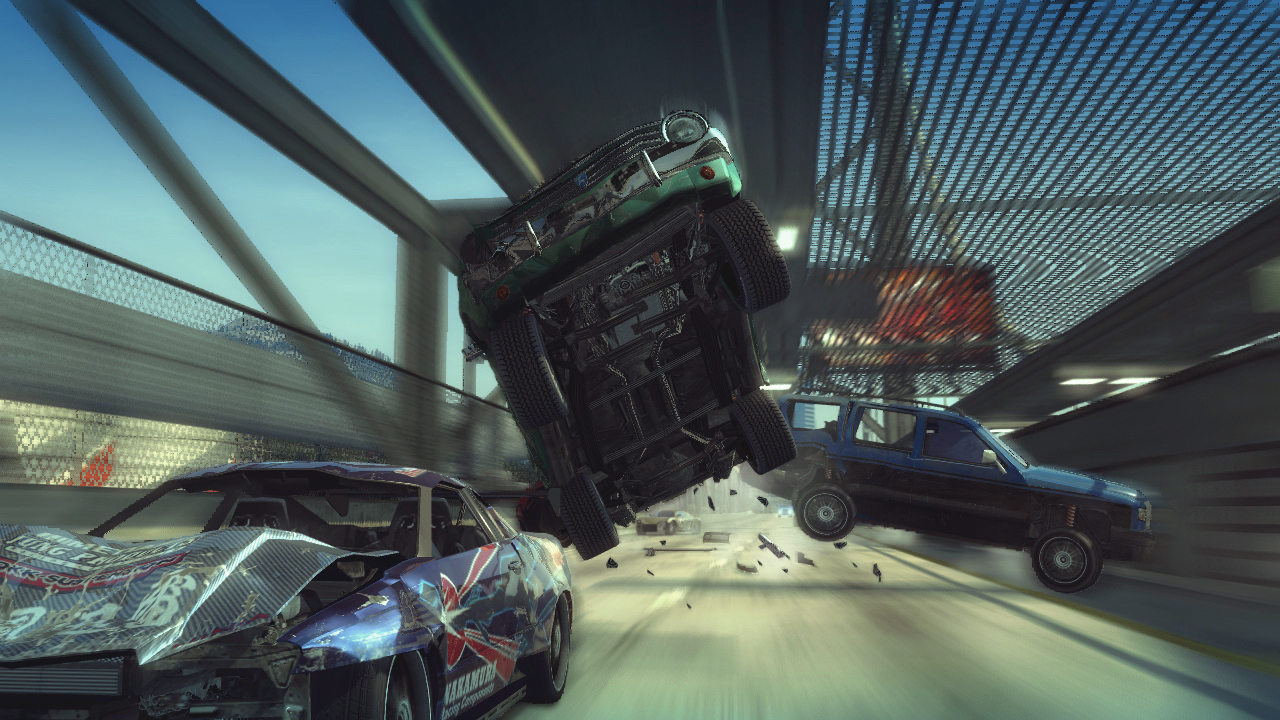 Race events themselves take place in the open world of Paradise City. You wander around the city finding events at each robot. The events range from a simple race from Point A to Point B, to the Marked Man event which adds a survival caveat to a race as other players try to wreck you three times. Then there are Take-downs, where you are tasked with wrecking a number of vehicles. These events, and the others, are fun at first, but soon become rote as they are too easy for at least half the game while you are racing on the Learner and D and C licenses. Once you attain the B and A licenses the difficulty spikes as timers and other measures are added to the events.

The game artificially increases the difficulty but allows you to complete the same races on each license. The video below shows a race where I crashed, putting me in last place and yet I still manage to win the race. The other video has me take a wrong turn drive about a mile away from the finish and yet again somehow win the race.

This was the only way that I failed to win a race as the navigation is not quite up to the standard of modern arcade racers. You must use a combination of the onscreen compass and the mini map to find your way around Paradise City. I am in two minds as to the fact that the navigation was not upgraded by EA for this remaster, on the one hand it is frustrating when you turn left instead of right because the mini-map orientation isn’t updated to modern standards, but on the other hand the fact that I often got lost means that instead of blindly following the mapped out route I have found various shortcuts, stunts and other surprises. This makes the races so much more than a simple A to B journey, they are much more interesting when you try and work these side objectives in while still trying to win.

The car handling itself makes playing quite easy. The cars are very responsive, but besides the cars having different acceleration profiles, the handling feels the same. The initial muscle car doesn’t feel heavy or great in a straight line but terrible around corners as it handles almost exactly the same as the street racer car reminiscent of something out of the first Fast & Furious. This allows you to concentrate on the road and getting to the front as the races are based on the “second is just the first loser” principle i.e. there is no prize for second, you must win. Again while this is great initially as it gives you a sense of accomplishment from the start, the low difficulty will lead many to give up well before they earn the higher licenses when the difficulty increases.

As a remaster the game is graphically impressive, frame rates are high, probably close to 60FPS on a PS4 and the models looking almost current gen. Impressively, the vehicle damage is realistic in that if you sideswipe a wall as opposed to a head on collision the vehicle deforms according to that particular crash. The cars are resilient, with the bigger, steel muscle cars more resilient than the street racers. Each vehicle has three wrecks during an event before you fail that event, but the time taken to reach that wrecking point varies depending on the relative strength of the cars.

Sound design is distinctive from the low growl of a muscle car V8 to the high pitched whine of a turbo charged street racer the cars sound distinct. Musically the game features a late ‘80s to early ‘90s rock soundtrack. From the title GnR song to Alice In Chains to the pop punk stylings of Avril Lavigne, you will be tapping your foot throughout the game. There is enough variety that you will not really notice the repeat playing of songs.

Burnout Paradise Remastered is fun in small doses, a game to be played between longer sessions of other games when you need to switch off and just race around recklessly, living out your movie fantasies. Unfortunately the game does not have any real longevity to it as it is too repetitive and too easy, forgivable, but barely, as it is a remaster, but of a last gen game, when it should’ve had more added to it. Given the price, I suppose it is too much to expect more development time to add features and quality of life improvements, but that may just be coming in the next Burnout as this was surely a test balloon to see if fans would want a current gen game.

If you have nothing else to play or have fond memories of the original series then this game will fill a hole in your library. If you are just curious, I would rather recommend the far superior Forza Horizon series on Xbox One. If you don’t own an Xbox, then I suggest you wait for EA to release a current gen Burnout.

Gets you right into the action

Too easy for far too long

Navigation takes getting used to

No tuning or upgrade path for the cars

Navigation can be a problem

Lurch
This was a game I'd just drop into every so often to play a few "Takedown" events. The soundtrack was fantastic and, having never played any of the other Burnout games, I enjoyed it. 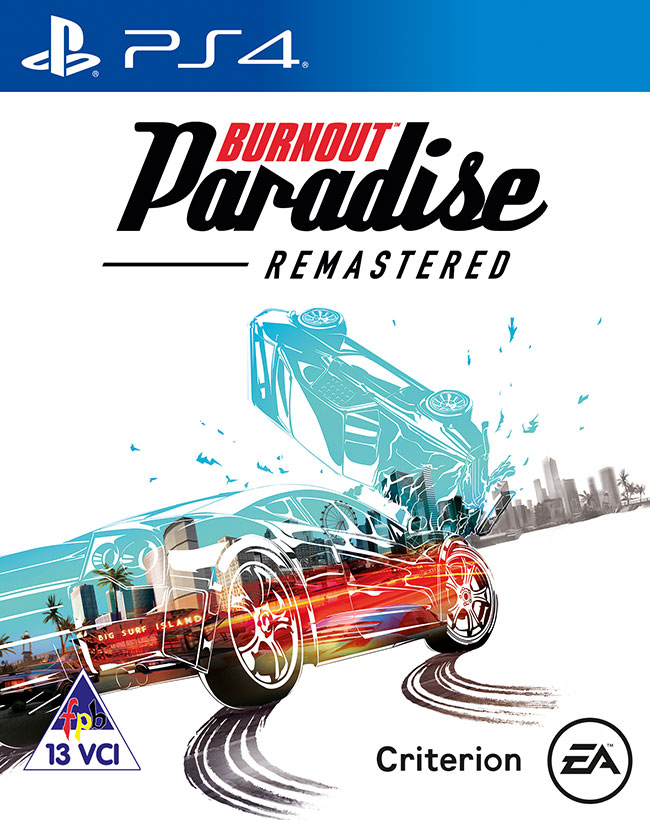