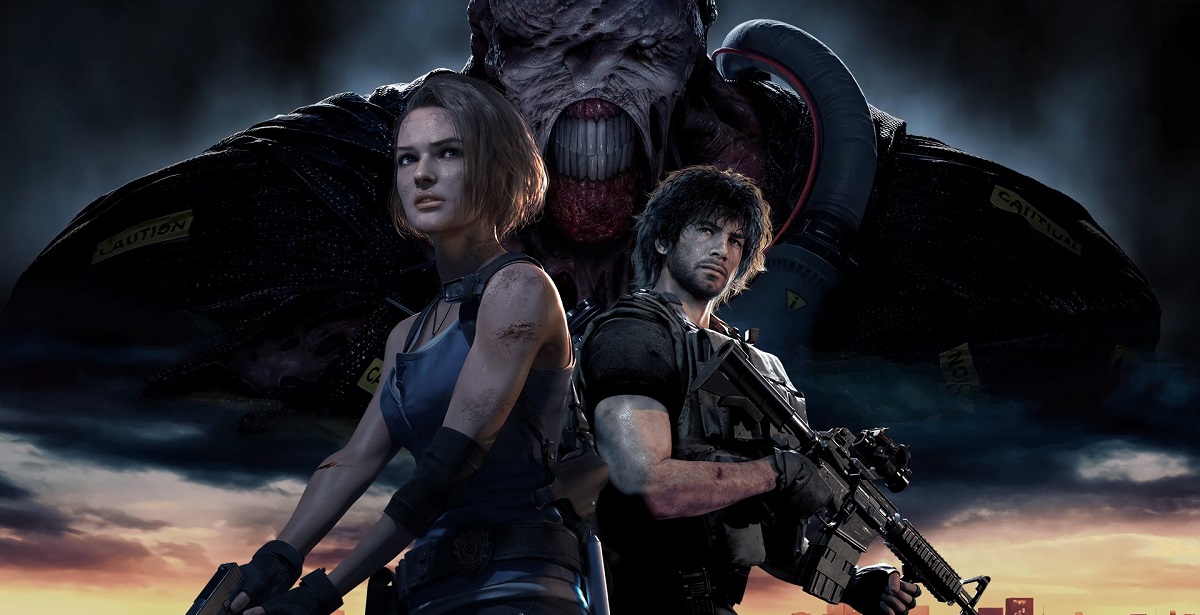 Capcom have been on a rather successful video game roll over the past two years. Monster Hunter World: Iceborne, Devil May Cry 5 and Resident Evil 2 were all hits. Rightly so, there’s been a lot of anticipation and hype surrounding their Resident Evil 3: Nemesis remake. The original game was highly successful way back in 1999 and fans of the franchise have been itching to get their hands on a proper remake. Does Resident Evil 3 (2020) do justice to the original game from way back then? 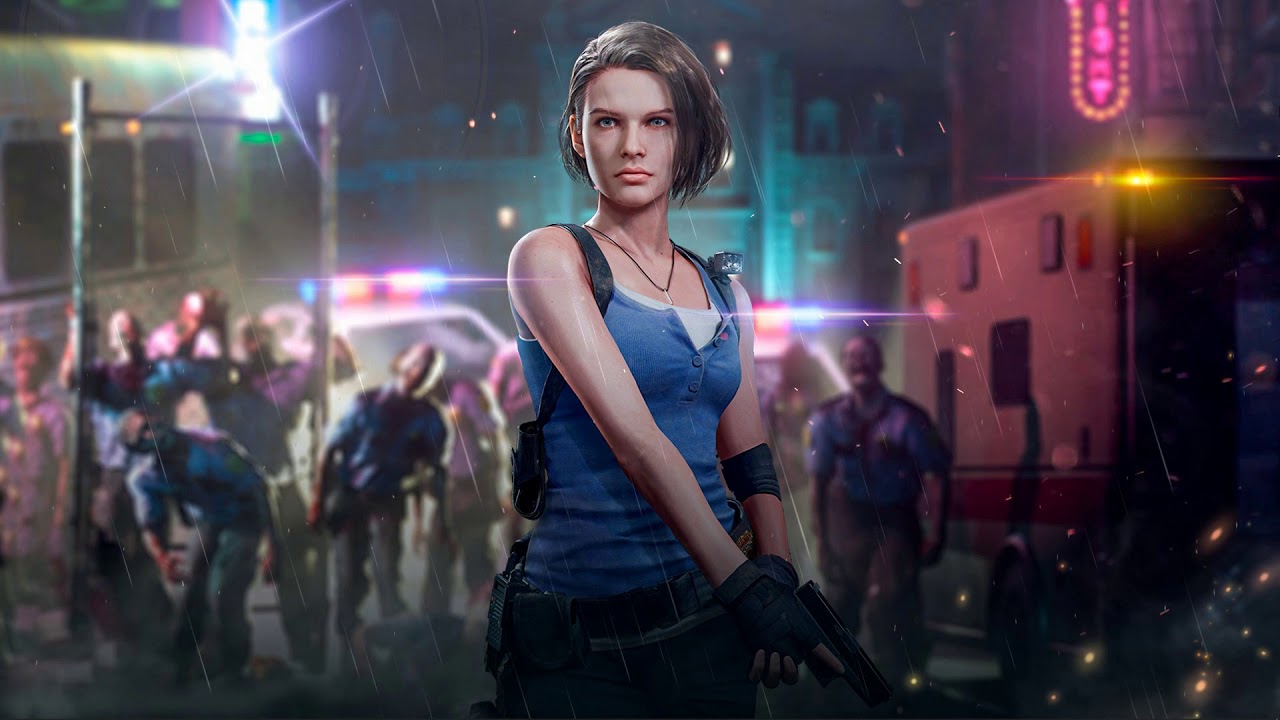 In Resident Evil 3. players will take on the role of Jill Valentine, with the game set a little while after the Arklay Mountains mansion incident. Within the first five minutes of the game, players will know that they are in for a treat. A first person segment segment plays out and this immediately establishes the game’s excellent sound design. When the game switches over to its full third person view, Jill quickly finds out that she needs to flee her apartment. Things escalate really quickly and soon enough you’ll find yourself out on the streets of Raccoon City.

Gameplay in Resident Evil 3 plays out in a very similar fashion to last year’s Resident Evil 2. Multiple in-game mechanics from the Resident Evil 2 remake have made their way into the Resident Evil 3 remake while bafflingly, some elements have been removed. The ability to stab knives into zombies and escape their clutches has been removed for some reason. While this might seem like a small edit in the grand scheme, Jill now has to struggle with the player hammering the action button to escape from a zombie grab. Her knife has unlimited usage but ultimately seems quite weak compared to its predecessor from the previous game. 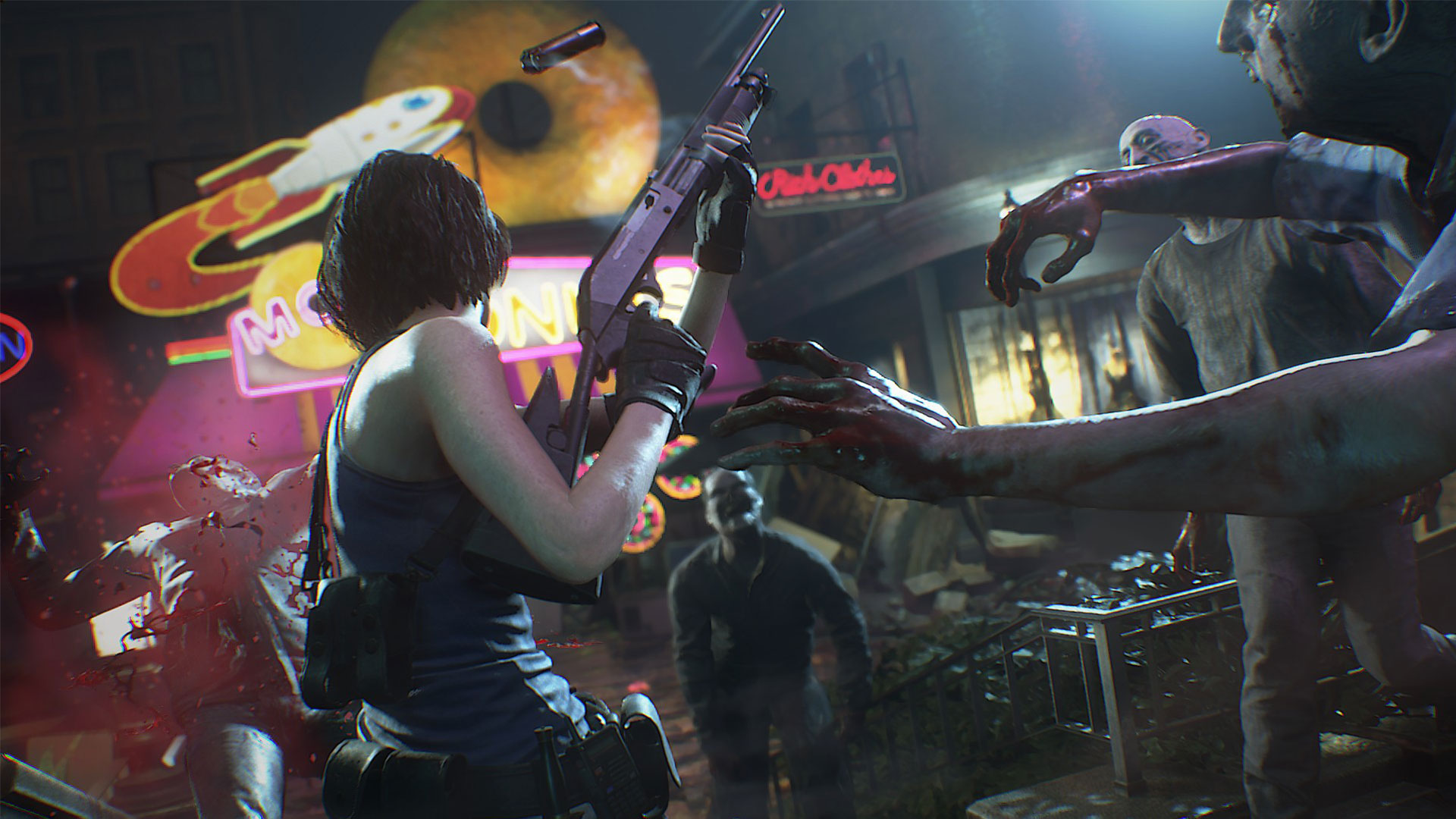 Controlling Jill’s movement is fluid and Capcom have opted to add a dodge mechanic to alleviate some frustration from dealing with multiple enemies. Pressing the dodge button at the right time initiates a “Perfect Dodge” animation in which Jill will move out the way, time will slow down and you will be allowed to fire off an attack with pinpoint precision. Given the fact that zombies in the game are quite literally bullet sponges, dodging and avoiding them at every opportunity is recommended unless you really want to go on an undead killing spree.

Pressing the dodge button at the right time initiates a “Perfect Dodge” animation...

Unfortunately much of what made the Resident Evil 2 remake great involved having a large environment to explore and puzzles to solve. Resident Evil 3, however has taken the opposite approach. Instead of having a large open environment with a lot of backtracking and interconnected exploration, the game is a lot more linear with a clear path from start to finish. You can still explore and find additional items in safes and optional rooms but the game is pretty straight-forward and far more action orientated than its predecessor. 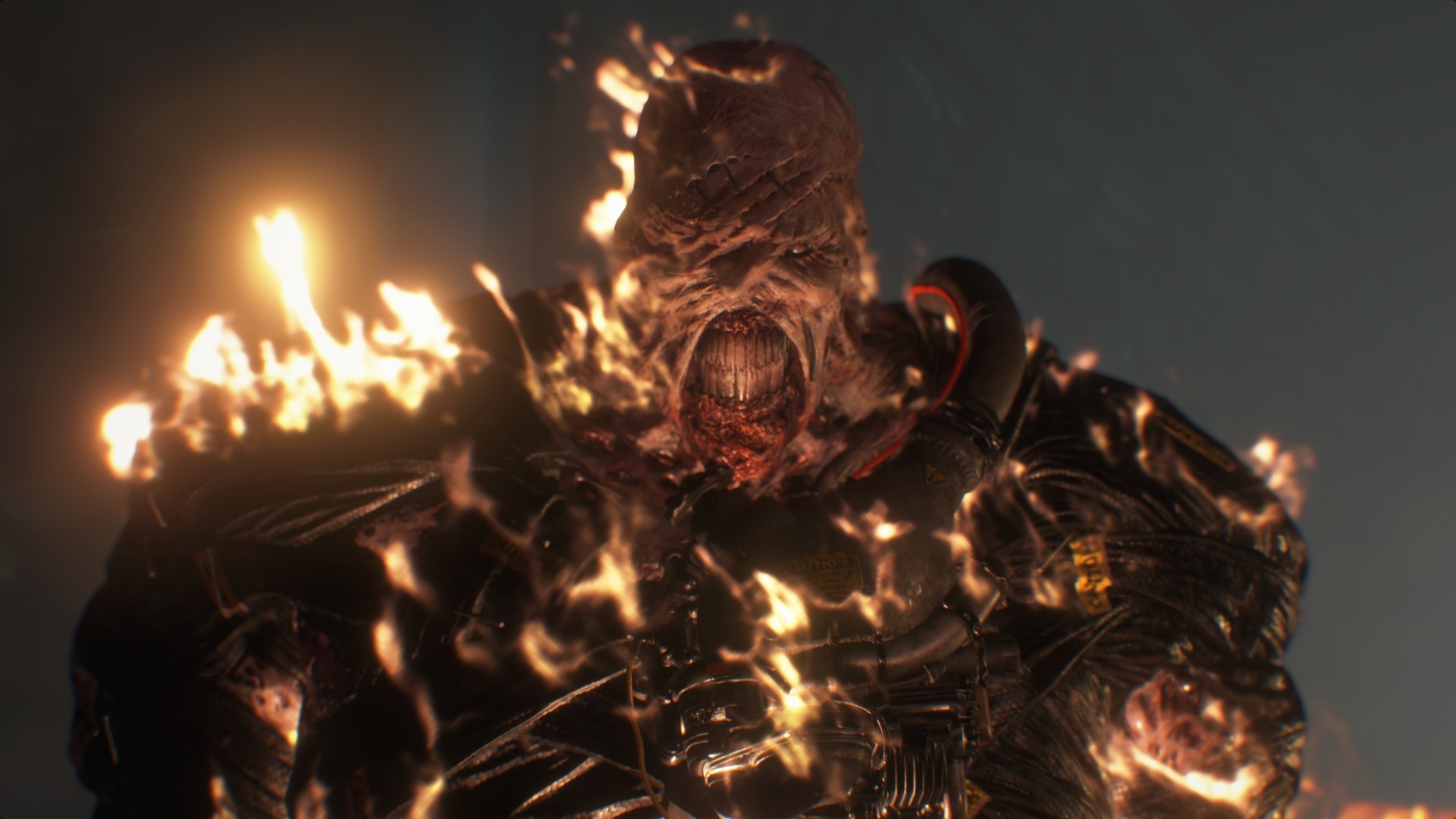 Nemesis, being a key factor in the game, is not exactly the terrifying menace he was in the original game. Mr. X in the Resident Evil 2 remake induced a sense of anxiety in you as you’d run around the Raccoon City police station. Nemesis does none of that. Instead, Nemesis feels like an overpowered chunk of meat with extendable tendrils. He’s also used sparingly in some select encounters and we wish that he would have been more present in the game like Mr. X was. When you do encounter Nemesis, he’s easily pacified too and the whole premise around him in the early game seems like a wasted opportunity. Thankfully, in the late game Nemesis takes on a different role and this is satisfying in every aspect.

Circling back to the zombies in Resident Evil 3, they aren’t quite the same as in the Resident Evil 2 remake. This time around they are far more “jelly-like” and the gore displayed when shooting at them has been significantly toned down. The *spoiler alert* Hunters in the game were however a step up and we wish that they featured a lot more than they did. These enemies are relentlessly fast and quite tough to beat while not presenting an impossible challenge. Kudos to Capcom for designing them so well. 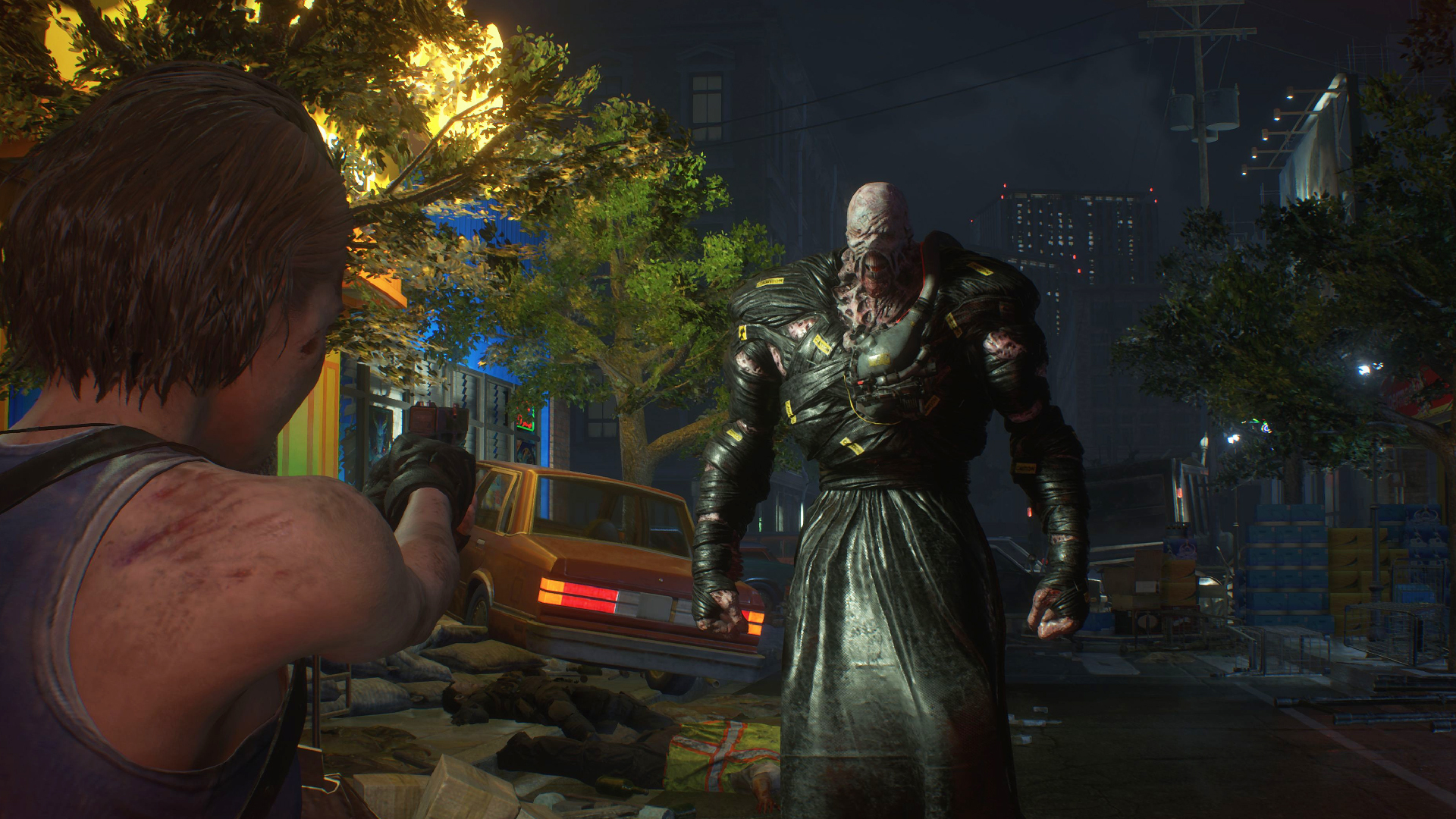 Graphically, Resident Evil 3 is absolutely gorgeous. The graphics are flat out amazing and there are plenty of moments in the game where you’ll be in awe at how great it looks. Carlos and Jill look incredibly great too with both characters being quite a step up over Resident Evil 2’s rather emotionless Claire and Leon. Environments in the game are quite diverse and the attention to detail is truly remarkable. The soundtrack and voice acting is on point and so too are the weapon sound effects.

Overall, Resident Evil 3 is more of the same while being watered down in some aspects and excelling in others. It does just enough to satiate fans and disappointingly, is over far too quickly. The entire single player campaign will take you just over five hours to complete at a leisurely pace. While there is some replayability in the form of unlockable challenges to take on once you’ve finished the game, gamers will definitely find this lacklustre. The “Hardcore” mode adds another layer of complexity to the game but once you’ve played through it once, you’ve essentially experienced the main meat and bones of the title. Resident Evil 3 is still, however, extremely fun to play. The streamlined action orientated gameplay and the story it tells is enjoyable and while a lot of potential was squandered, the game still shoots for the stars.
8

Nemesis was a wasted opportunity

Not that many puzzles

It's over far too quickly

Coffeboy
been playing it a lot and i must say i am enjoying a lot more than i did res 2.

Blaze
@Lurch Yeah I kinda agree. Not saying it doesn't have replayability, since I tend to run through RE campaigns multiple times, but jut on the outset, the content in RE3 is notably thinned down compared to RE2's beefier content at launch. Plus RE Resistance isn't exactly something fans asked for.

Lurch
Mastering the mechanics at higher difficulties is definitely a draw for some people, but I'm personally after narrative changes, or maybe some unique locations + encounters in each run.

Snow
Yeah it's definitely the perfect game to replay.

DarkPrince
The game is designed around replaying it over and over, 2 unlockable difficulty modes, special weapons that can be bought with points when you complete challenges which there is loads of. This game has just as much replayability if not more than RE2. There is also a lot more action in this than RE2 which makes it a bit more fun in the action department. These games have always been short, adding a few arbitrary choices or RNG doesn't change that nor did I notice the changes because the game is just great fun to play.

Lurch
Damn it this looks good but the linearity and lack of replay value bothers me. The original RE3: Nemesis was far from the best "classic" RE experience but the live-action choices and light RNG elements stood out as unique. Removing the novel features of a game when remastering it seems like a misstep. 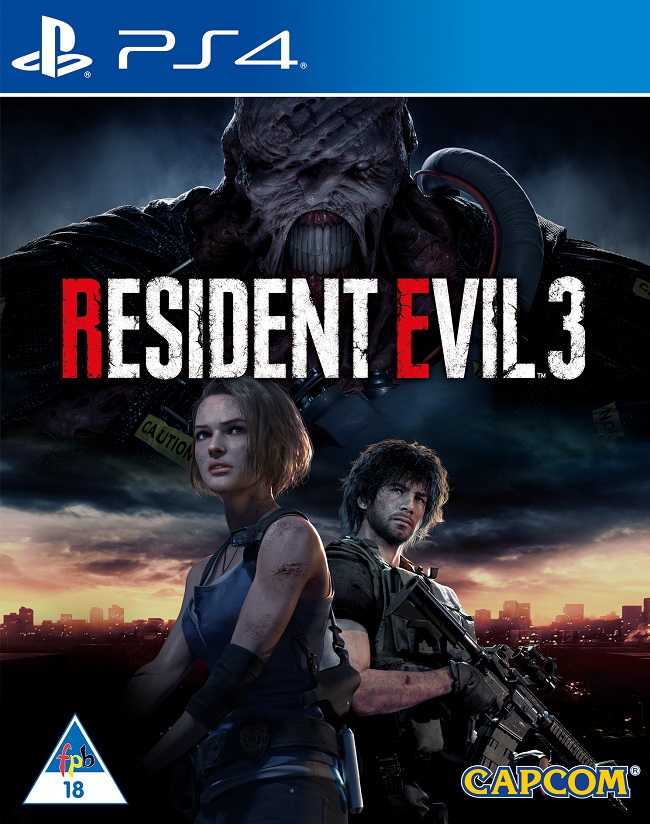