How I became a kung fu god. 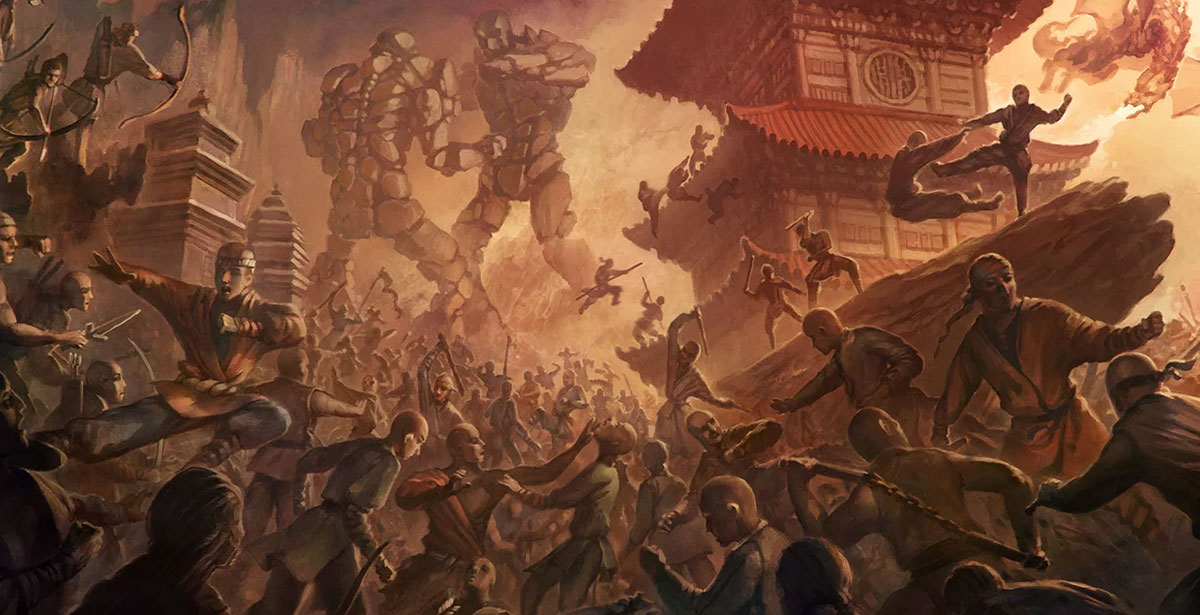 What happens when you reach the apotheosis of the gaming frontier? You get One Finger Death Punch 2. A game filled with the notion of taking simplicity and layering it with high-octane action and a gameplay loop so addictive, I couldn’t take my mind away from it. If someone asked me how would I explain One Finger Death Punch, I'd reference the iconic monologue from John Wick, where the mafia boss explains what John Wick did with a pencil and a room full of people. Well, One Finger Death Punch 2 is the scene from the sequel where we actually get to see the pencil in action. 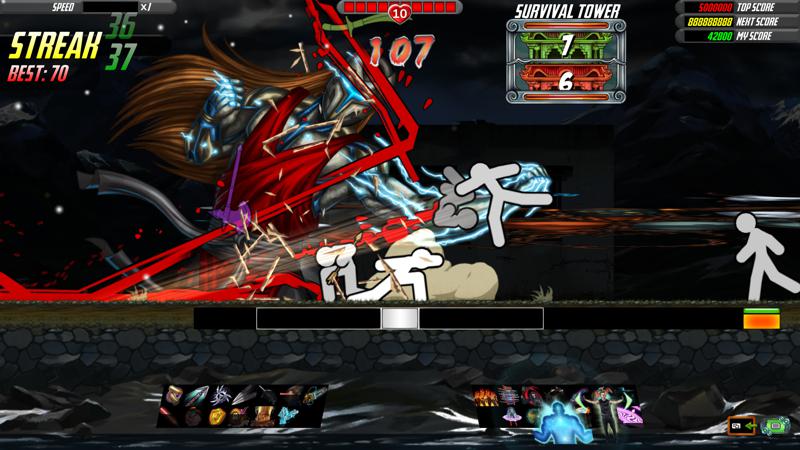 The game is devoid of any story or basic plot, something One Finger Death Punch 2 proudly exclaims from the start. All you really need to know is how to play it. That’s how simple it is. One button causes you to attack left, while another button is used to attack right. Once the enemy is within range of attack, they’ll either die instantly or take damage. Within minutes, you will know how to play the entire game. You attack to the left, or your attack to the right. Don’t make the mistake of thinking it’s that easy and definitely never button mash.

Once you have grasped the nature of when to press your two buttons, you’ll quickly be introduced to many elements that build upon this gameplay style. Enemies will begin to come at you in hordes, resulting in satisfying brawler fights, having you strategically fight your way through. Weapons give you more range that varies between weapons, allowing you to hit enemies from further away. You can dodge ranged attacks, causing them to instantly kill an enemy behind you. Each time you kill an enemy, you start filling bars for several skills, eventually letting you do things like ripping your opponent’s heart out or summoning an ice demon to freeze an entire row of foes. Sometimes you smash the ground causing all enemies on screen to die, because it looks cool so why not? 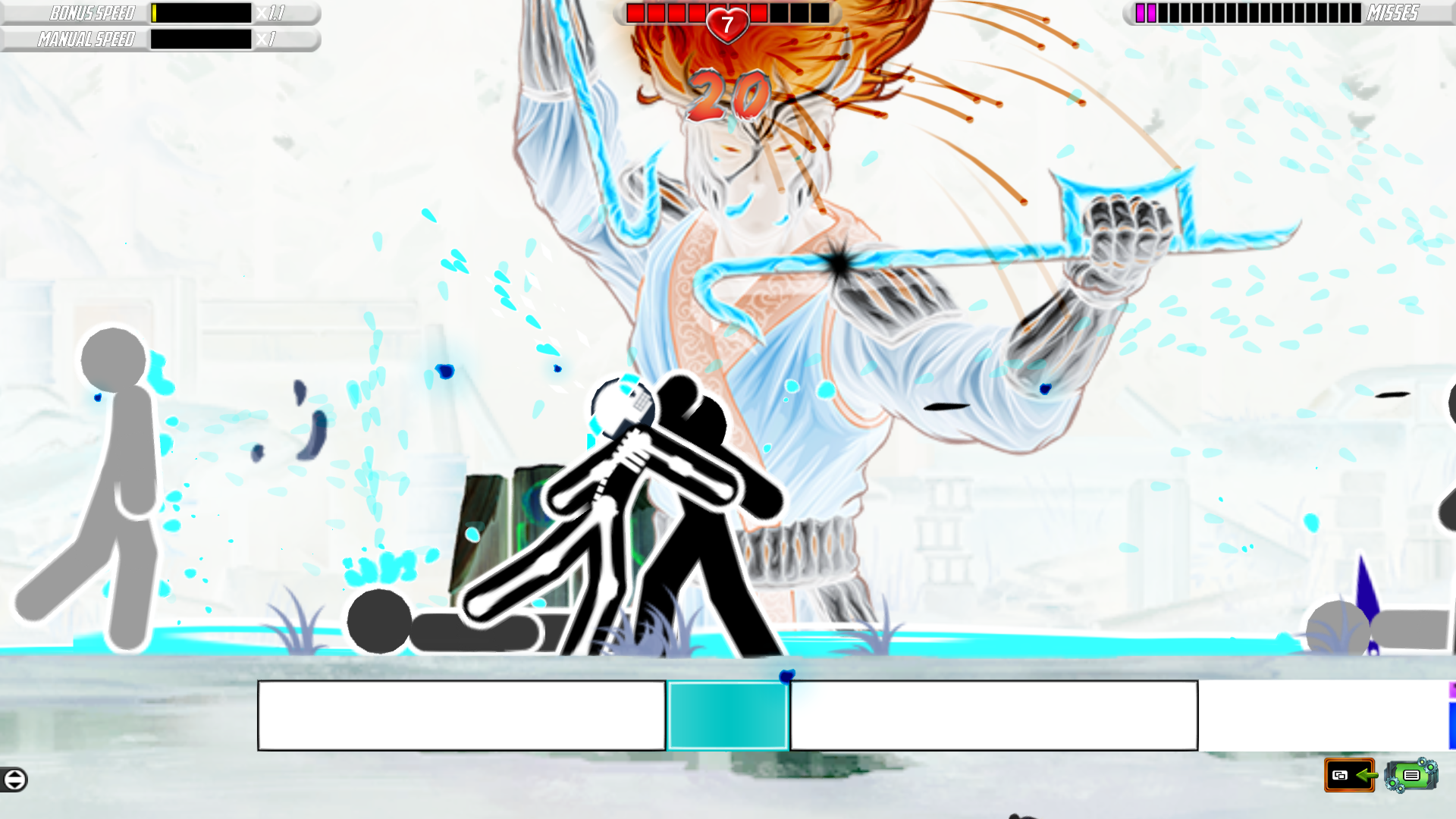 Through it all, you’re constantly reminded to attack left and attack right. That really is all there is to One Finger Death Punch 2, and yet, the game manages to impress me with just how much it crams into that simple notion. Each level becomes an absolute finger workout, as battles turn into one man versus an army, flipping through the air, performing levels of kung-fu I yearn for in action movies. Random, but welcomed, effects will see dramatic Mortal Kombat themed x-ray moves that break bones, slowing down time, and even shooting laser beams from your eyes and melting an enemy's face off. Don’t ask, just accept it.

Your inputs may be simple but every attack is jaw-dropping and has a lasting impact.

This is the secret that took me a few rounds to uncover from One Finger Death Punch 2. It may just be a stickman, but you feel like an absolute warrior. Your inputs may be simple but every attack is jaw-dropping and has a lasting impact. You think after 50 rounds I’d get tired of watching my character rip someone’s heart out and show it to him. But I never did.

Just when you think One Finger Death Punch 2 is starting to become predictable, the game changes up the levels. From simply killing enemies, you get a chainsaw to mow them down, or throwing entire armies into traps and starting a blood bath. Levels like these are always popping up between the intense mob rounds the game has on offer.

This is especially refreshing, since there are over 400 levels to work with. That being said, this isn’t a game that makes you sit through through the hundreds of levels in one setting. That would be missing the point of One Finger Death Punch 2 entirely. This is a game that you play between other games. Think of One Finger Death Punch 2 as a spoon filled with lemon sorbet between meals. It manages to keep your attention well after you’ve played through other games, but still maintains its hook through it all. You want to perfect the levels. Beat the game at its own rules. Merely having four out of five stars will not do in a game like this.

If you do manage to finish the entire game, there is still so much more to do. There’s a survival tower that requires you to climb it, a randomised gauntlet, and a particularly accurate mode where you move the mouse across the screen to push a cat out of the way. If an artificial cat doesn’t seal the deal, the original game is unlockable as a reward. 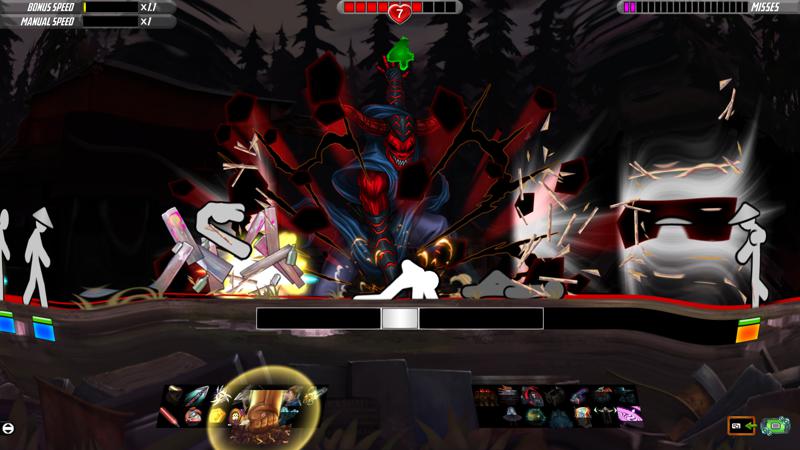 There’s a certain level of accomplishment that is present in most point-chasing games such as Tetris and Guitar Hero. There is no simple way to put this into words, but One Finger Death Punch 2 embodies the idea of being easy to learn, difficult to master. The game almost meshes every element to combine into a poetic dance of carnage and destruction. Almost. There are moments when the game throws some insane bosh rushes that can only be described as quick time events and that can really disrupt the flow of the game. It wouldn’t be much of a complaint if the game didn’t throw them to you as often, and I really wish the “bosses” were merely sprinkled into the missions, instead of being thickly layered in.

Thankfully, One Finger Death Punch 2 makes up for it in every other aspect. While the game doesn’t shy away from being as flashy as possible, it doesn’t distract you from the amazing soundtracks on offer. The music compliments the action, with every other punch hitting an enemy when the bass line hits. Focus on the level for even a moment and you will find yourself totally engrossed into the world that is One Finger Death Punch 2. That same compliment can be given to the announcer, who is rather comical in a nostalgic way. 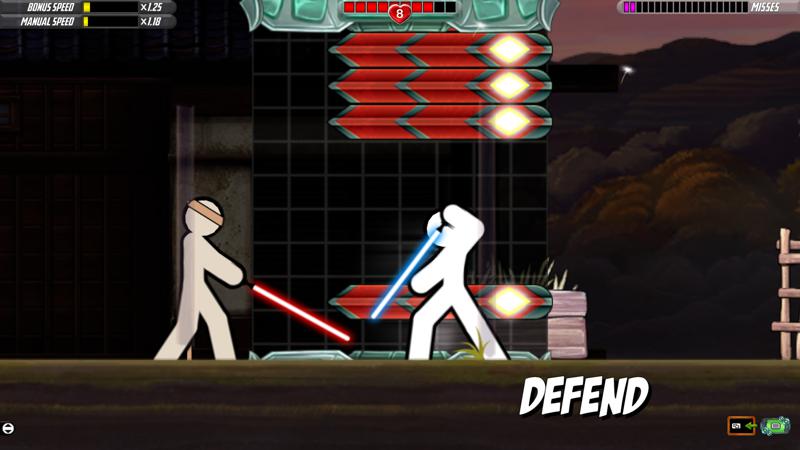 One Finger Death 2 doesn’t stray away from what makes it great. It relishes in the idea of its difficulty, speed, and pure absurdity. While the game suffers occasionally from its flow, the action and charm on offer far outweigh the minor issues. One Finger Death Punch 2 serves as an answer to a question you never knew you had, and you just have to choose to accept it.
9.9

Coffeboy
man this need to come to ps4 .. wow!

Keeo
@Tebulot your fingers will give before your mouse does

Tebulot
This game is going to be the death of my mouse....