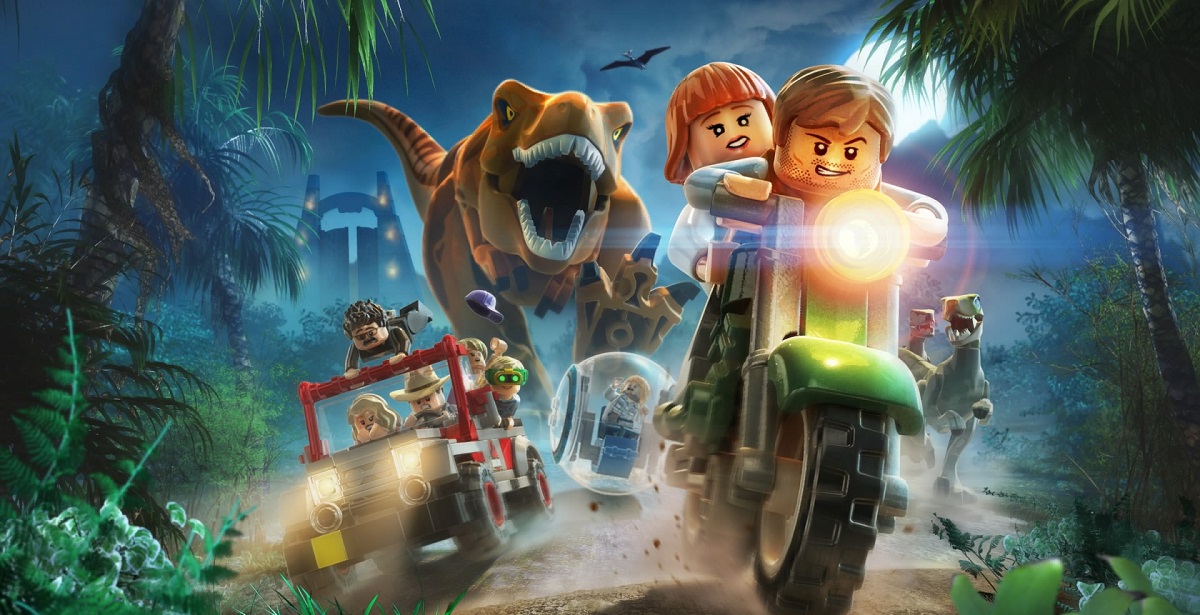 The Lego series of video game adaptations has come a long way in recent years. While many count them as guilty pleasures, I straight up admit to enjoying them more than I did when I first gave their movie franchise adaptation line a chance. While the Lego Star Wars line-up didn’t tickle my fancy too much, once I played the Lego Indiana Jones games, I was hooked. The cute Lego humour, build-it-to-solve-it gameplay and the obsessive stud and collectible gameplay has become a bit of an obsession of mine since. While the quality of the games has fluctuated with each Lego movie adaptation, they have been nothing less than simple fun, and in an industry stuffed to the brim with massive open world games, requiring hundreds of your hours to complete, that is exactly what you need. 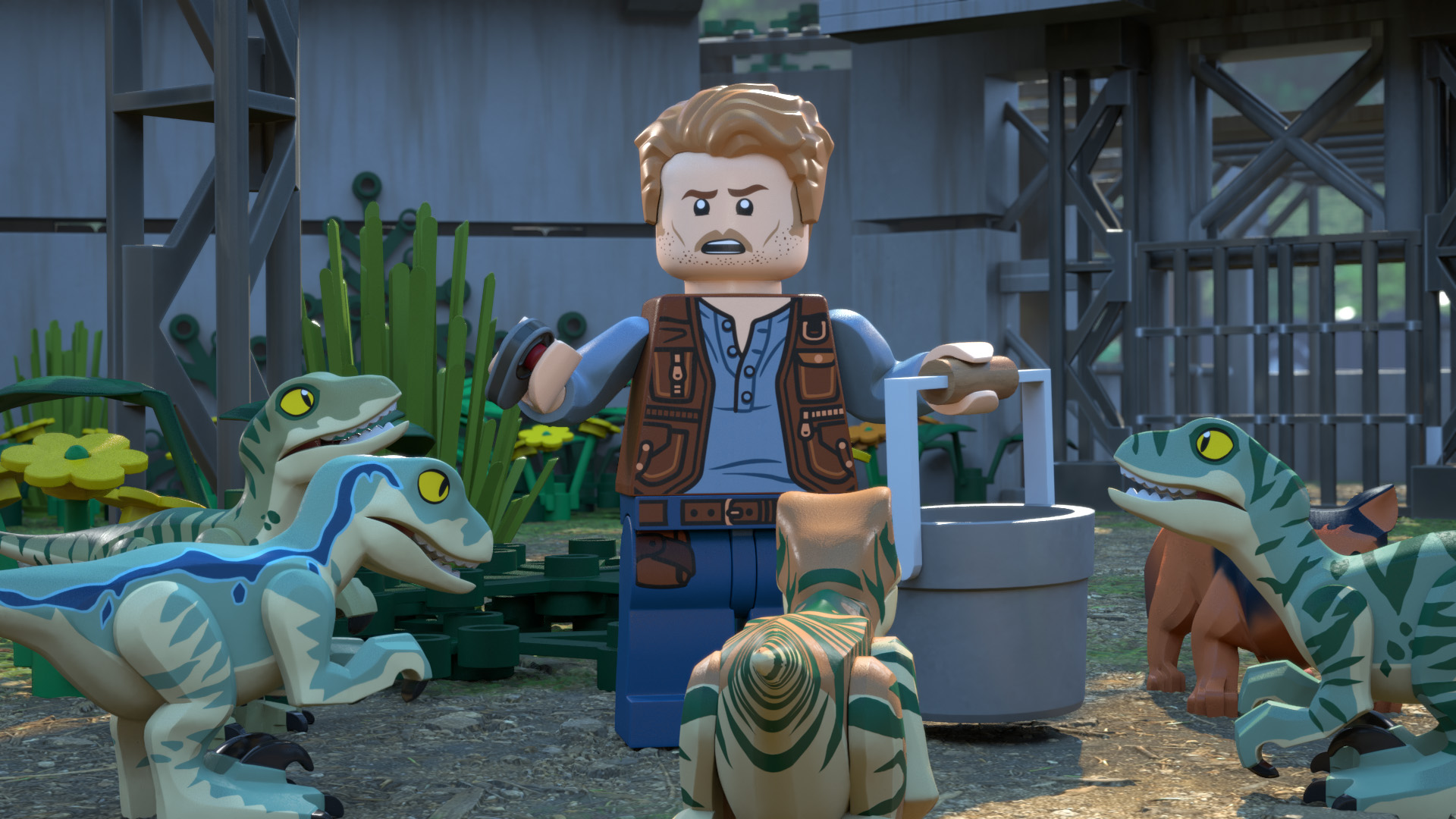 Lego Jurassic World originally launched on June 12, 2015, to coincide with the movies release, on PS3, PS4, PS Vita, Xbox One, Xbox 360, PC, WiiU and 3DS. The Nintendo Switch version launched late last month, making it rather late to the party.

However, that lateness does bring with it some benefits. First off, the Switch version comes packaged with all of the game's DLC - three packages comprised of character extras, variants and vehicles. Two, more games in the Switch’s library isn't a bad thing, especially when they have dinosaurs for the younger kids and, finally, you’re looking at a title that won’t tax the Switch’s hardware at all.

In handheld mode, the game is rather pretty, especially in places with rain, mud and puddles.

As a four year old title, Lego Jurassic World runs seamlessly on the Switch. In handheld mode, the game is rather pretty, especially in places with rain, mud and puddles. Occasionally you will find some lower resolution textures and the screen resolution seems to be dynamic, but the nature of the Lego visuals certainly aren’t hardware pushes. Characters, especially the dinosaurs, are animated incredibly well but I did find areas where the A.I. partner would get stuck on scenery or props, requiring me to reload the level because I couldn’t continue without them. 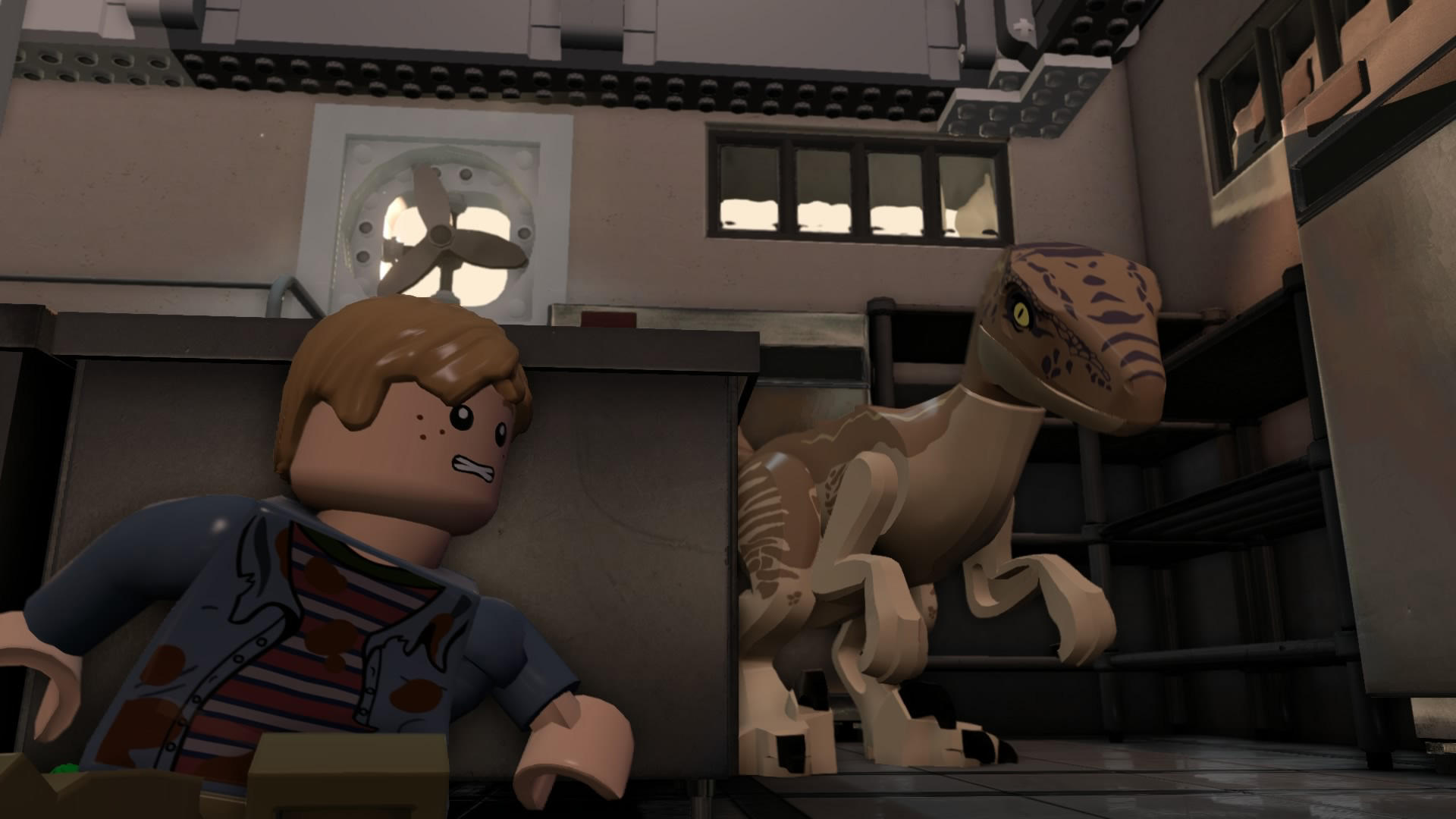 The basic Lego gameplay hasn’t changed and Lego Jurassic World doesn’t really bring any new innovations to the table either. You’ll be playing through levels inspired by the movie's major set pieces, smashing up the scenery to collect studs and using broken Lego pieces to build items to help you through the game's “puzzles”. There’s a large roster of characters to collect, but they’re just filler to pad out said roster. I’m certain no one is particularly thrilled to be playing as Ingen Scientist or ACU Trooper, for instance. The movie's core cast, along with each character's particular set of skills, such as Owen’s camouflage or Nick’s crowbar, will more than fill the requirements to solve each level's obstacles, post-game and during the campaigns as well.

The customisation options are a nice touch even if they’re limited to only the dinosaurs that you can unlock, of which there aren’t a significantly large amount.

The biggest addition to Lego Jurassic World, though, is the ability to unlock and play as the dinosaurs as well whom, as with the standard characters and a nod to Ingen’s genetic labs in the movies, you can customise with other dino body parts. Want a Velociraptor with a Stegosaurus tail and a baby Triceratops head? You can do that. You can also custom paint the dinosaurs hides as well. The customisation options are a nice touch even if they’re limited to only the dinosaurs that you can unlock, of which there aren’t a significantly large amount. I would rather have had a larger dinosaur roster than a character roster, even if was filled with species that don’t star in the movies. 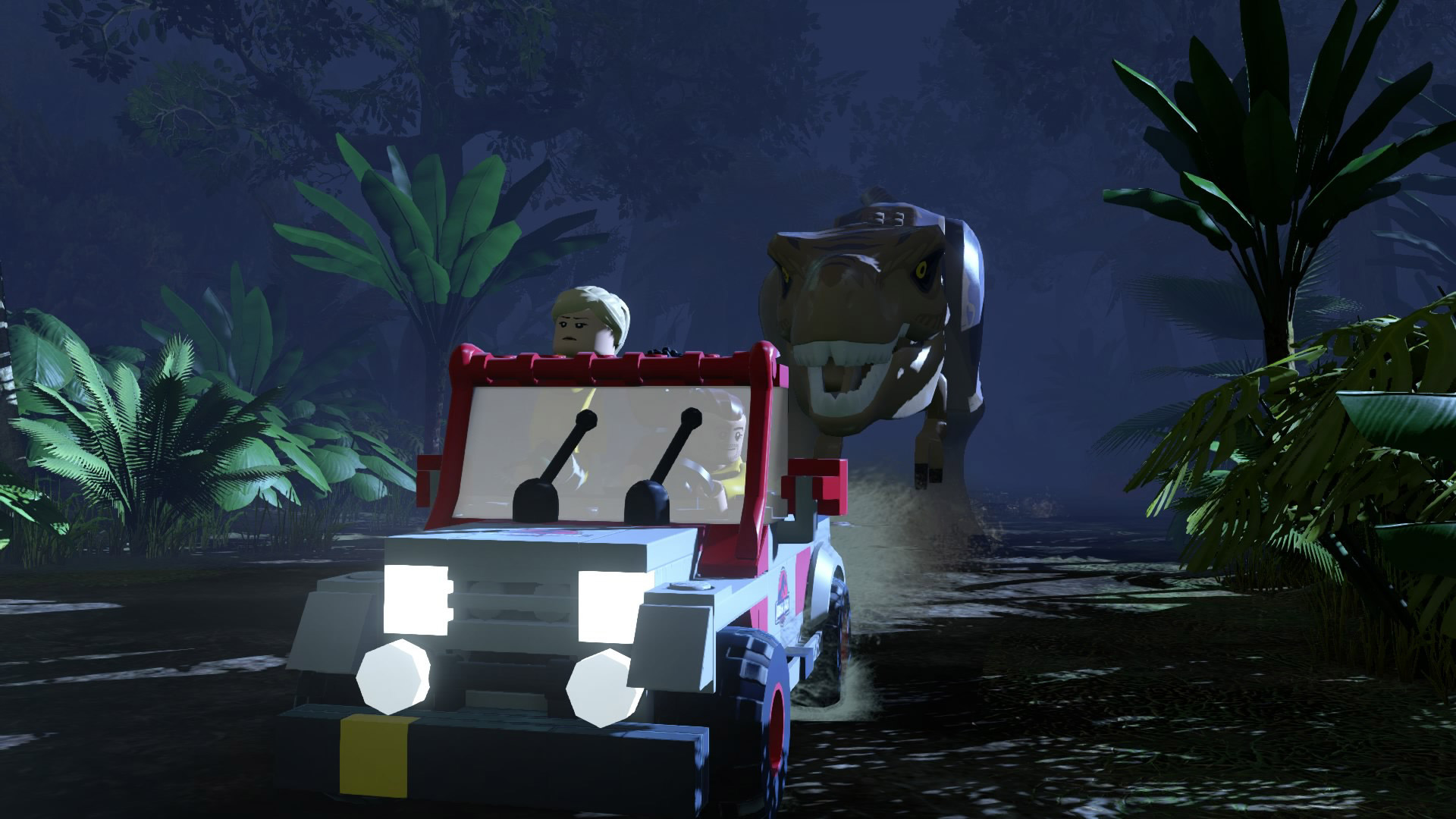 You won’t only be running through Jurassic World though, as Jurassic Park 1 to 3 make an appearance as well, with a handful of levels from each movie's set pieces, making for a fairly lengthy campaign in total. Once that’s done, you can play the levels and explore a limited semi-open world version of each island in freeplay, which are the Lego games' versions of an endgame. This is where you’ll be spending most of your time to collect more characters and gold and red bricks.

Things aren’t all rosy on the Isla’s though. Lego Jurassic World uses the same basic gameplay setup through each movie, making this easily the most uninspired and basic Lego tie-in that I’ve played. For the first time, a Lego movie franchise has felt exactly like what it is, a movie-tie in title. You’ll do a little exploring, run from a dinosaur, help a dinosaur through quicktime events, explore a little and repeat. This gameplay loop runs throughout the four movie campaign with even the little Lego humour flourishes in short supply. 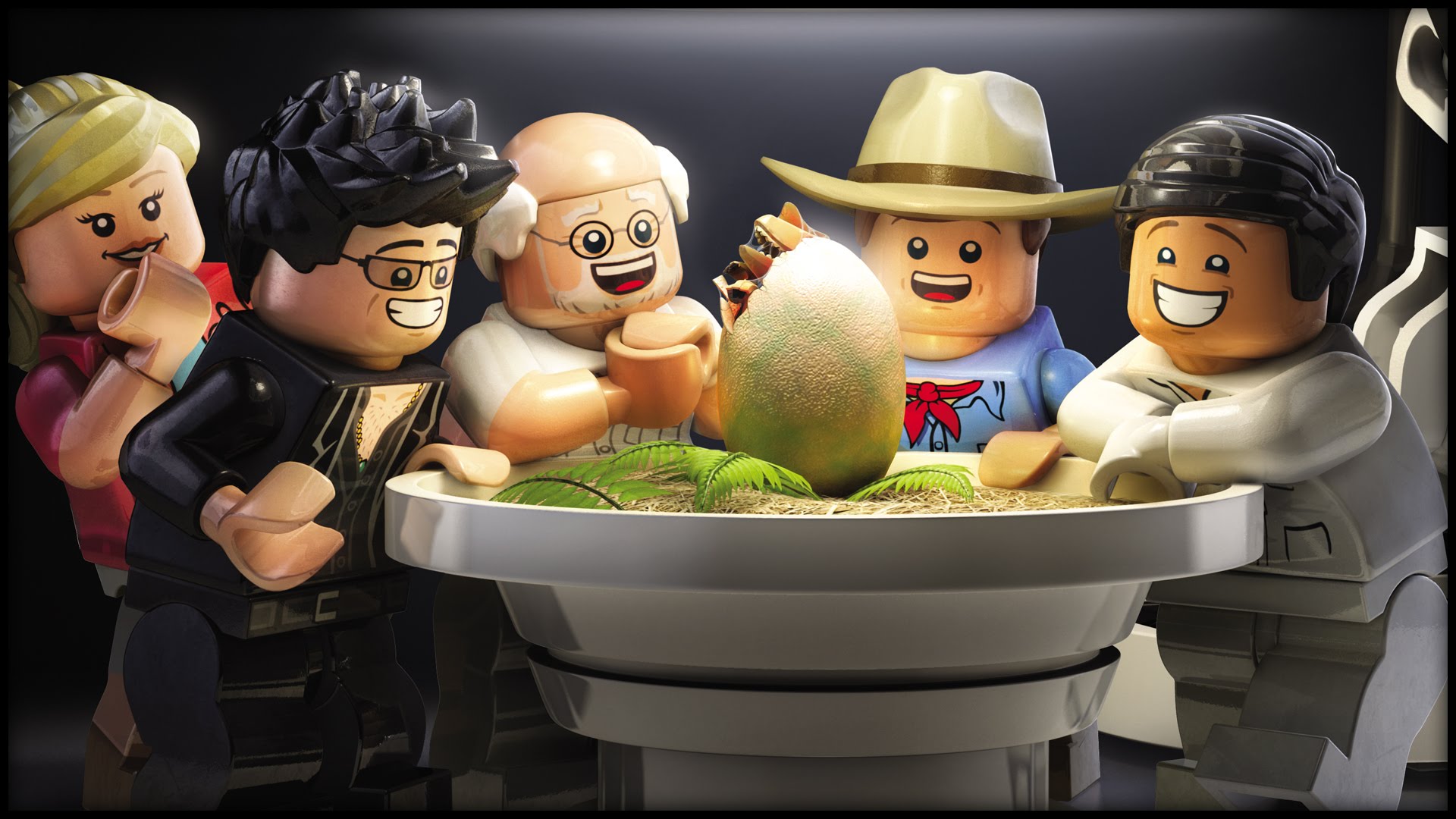 The game's freeplay modes are just as uninspired, with rote tasks to complete to collect those coveted gold bricks. Where previous games have usually made the freeplay mode sections fun, even if the tasks are repetitive, by throwing in some humourous reason to do something, that’s just missing from this game as well. This is the first time in a Lego game that I haven’t actually wanted to run around the missions and world in freeplay mode to collect the rest of the mini-kits and bricks, and with my OCD completionism, that’s saying a lot.

Lego Jurassic World isn’t terrible though. There is some fun to be had going through the campaign, and the first time you play as a brachiosaurus and view the world as a walking skyscraper is pretty cool. Unfortunately, it’s a feeling that doesn’t last too long before the game's uninspired design and handling of the source material set in. As a title for the younger, dinosaur-obsessed crowd, Lego Jurassic World will do its thing just fine, but other gamers who love the Lego series will find themselves wanting more of the inspired, silly and fun design that later games in the series, left to do their own thing while not been tied down too faithfully to the source material, have recently provided.
5.8

Jurassic Parks 1 -3 are included as well

Looks quite pretty in handheld mode

A.I. can get stuck on items, requiring a reload 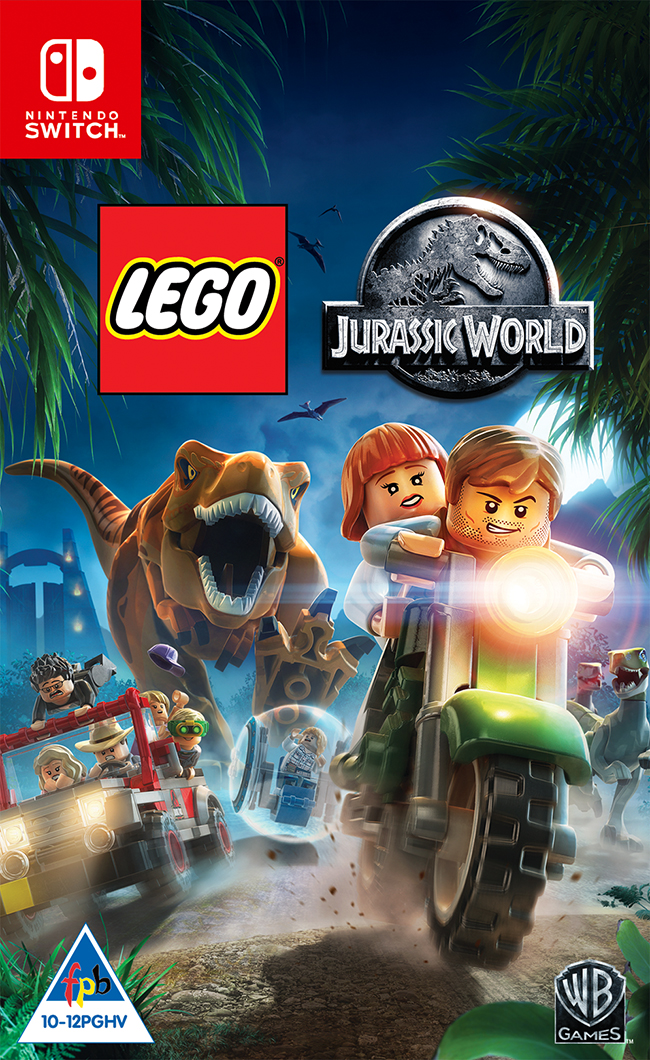