Gandhi wants to know your location. 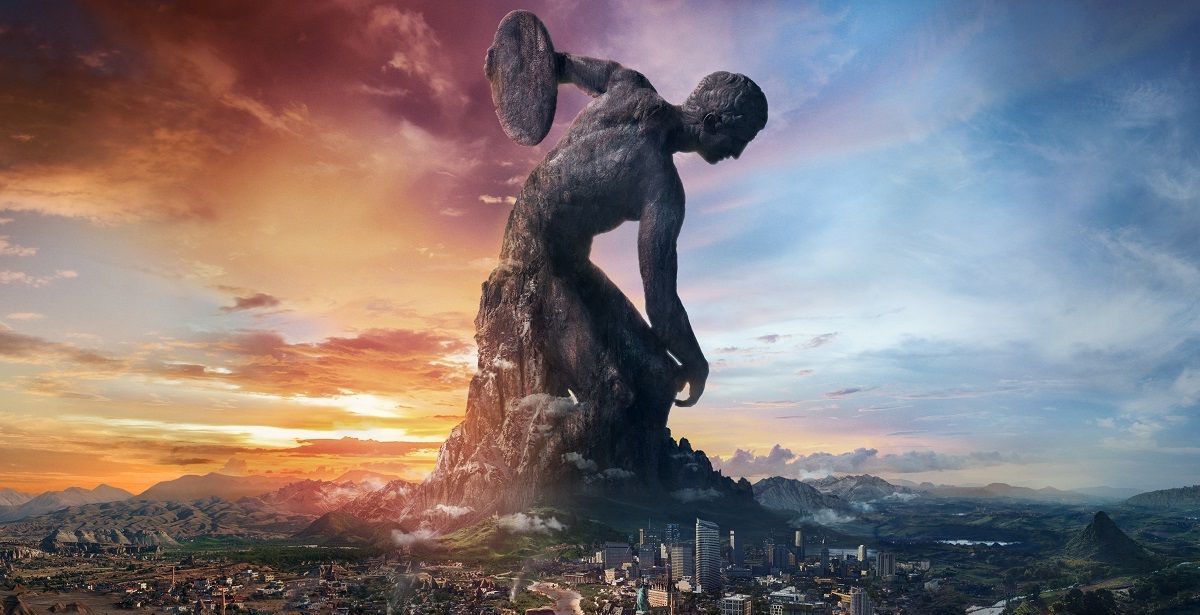 For the first time in over a decade, console gamers can get their hands on a Sid Meier's Civilization game. Nintendo Switch, PlayStation 4, and Xbox One owners now have access to the full-fat version of 2016’s Civilization VI. The interface has been overhauled, the control scheme reworked for gamepad, and it both looks and runs well, even on base hardware. However, while the game has been competently ported to consoles, Civilization games have always thrived on the PC rather than console; the glacial pace of both solo and multiplayer modes can often feel antithetical to the console experience.

I was never the biggest fan of the core Civilization games on PC, but poured hundreds of hours into Sid Meier's Alpha Centauri, and a hundred more when the streamlined spin-off, Civilization Revolution, release on last-gen consoles in 2008. Unlike the core games that were continuously growing in complexity, Civilization Revolution reigned in several cumbersome mechanics, streamlining research trees, build orders, and unit movement, while introducing a strong multiplayer component that catered to shorter games. Conversely, the Civilization VI port, revels in its complex systems - especially if you own the expansions - and offers an immense amount of customisation when setting up solo or multiplayer matches. 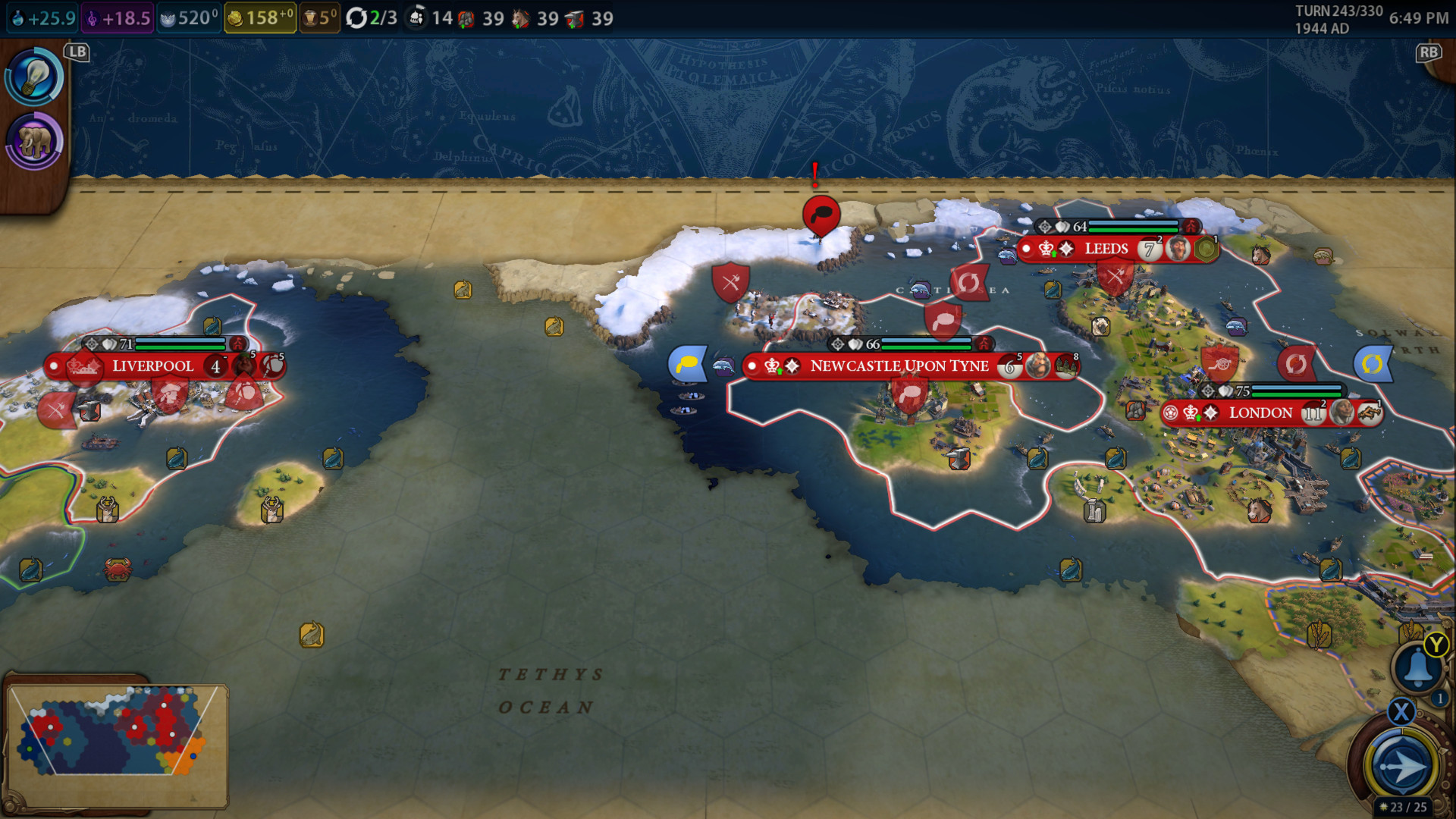 The colonisation of the New World commenced later than expected, when the British Empire finally established the city of Liverpool alongside Hudson Bay in 1944. Welcome to Civilization.

As with its predecessors, Civilization VI is a game about crafting your own alternative history and future for your chosen civilisation. You pick from a myriad of leaders, each representing a civilisation with unique units and tech abilities to give them a leg up in certain ages, then start out with a humble settler, pick a spot to build your first city, and begin your journey, turn by turn, towards victory through military, scientific, cultural, or religious supremacy.

Moving hex by hex, you expand outwards looking to create new cities in areas of abundant resources or strategic strength, expand the infrastructure and unit-producing abilities of your existing cities, pick a government type or religious doctrine, pick your research path through gigantic tech tress, garrison military units to defend your own cities, or use them to encroach on your neighbours. That said, anyone who’s played a Civilization game before will appreciate that’s a gross simplification of all total activities on offer and the turn-by-turn decisions you’ll be making.

...navigating unit and building production lists, selecting upgrades along your research tree, and handling diplomatic encounters is quick and intuitive with a gamepad.

There are some changes Civilization VI introduces that complicates city upgrades and unit movement. Players are now forced to place certain city upgrades on adjacent titles (juggling natural resource production vs. infrastructure), and only identical military can be stacked (or assigned as escorts to non-combat units). Both these changes, coupled with an auto-select that’ll often flick you between units on opposite sides of the map, can make selecting the right hex or commanding large armies fiddly. On the upside, navigating unit and building production lists, selecting upgrades along your research tree, and handling diplomatic encounters is quick and intuitive with a gamepad. As an added safety net, the game will take you to cities with empty building queues or highlight completed research before allowing you to progress to the next turn. 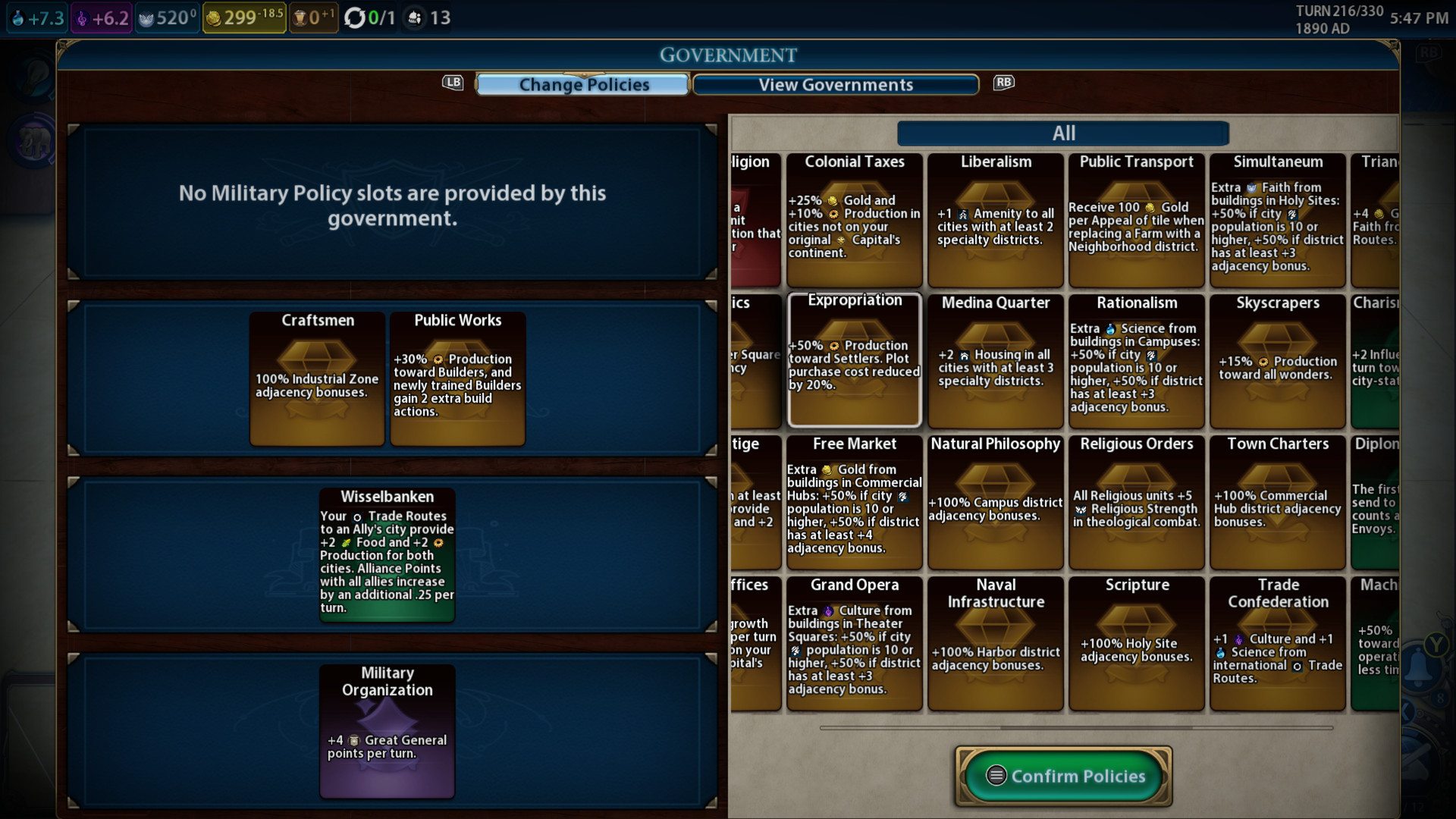 There is an insane amount of technological advances, governing styles, and religious doctrines to unlock, all of which can provide substantial boosts to your civilisation when synergised.

If you pick up the expansion bundle, which includes 2018’s Rise and Fall and 2019’s Gathering Storm, gameplay complexity increases further still. Rise and Fall introduces the concept of “Golden” and “Dark” Ages, based on whether you reach or fail certain milestones, increasing production or decreasing citizen loyalty respectively, but introducing powerful governing styles for either scenario. Instead of only “famous people”, unique governors can also be assigned to your cities to provide further bonuses.

Gathering Storm is by far my favourite addition, expanding diplomatic engagements, introducing natural disasters, and gamifying climate change. Developing your cities and industries, while consuming natural resources, affects the world’s climate, potentially triggering several natural disasters. The World Congress allows you to battle it out diplomatically by voting on several bills that can change game rules. Interaction with other civilisations generates “Favors” or “Grievances”, allowing you to force allies into deals or “justifiably” declare war without incurring a negative response from other nations.

Developing your cities and industries, while consuming natural resources, affects the world’s climate...

Along with new mechanics and civilisations, the expansions introduce “scenarios” that offer a more structured experience, with predefined maps, streamline tech trees, or unique variables; however, Civilization VI is at its best when you sift through the myriad of custom games settings and design yourself a world you want to conquer. Pick a ruler, a ruleset, the number of competing civilisations, the size and complexity of the map, the likelihood of natural disasters, the presence of unaffiliated barbarian tribes, then set about taking over the world one turn at a time. I’m a big fan of trying out each civilisation in turn, setting the map to imitate the modern continental layout (complete with crude but accurate resource placement), set my starting point to a historically accurate location, and then battle for alternate-history supremacy. 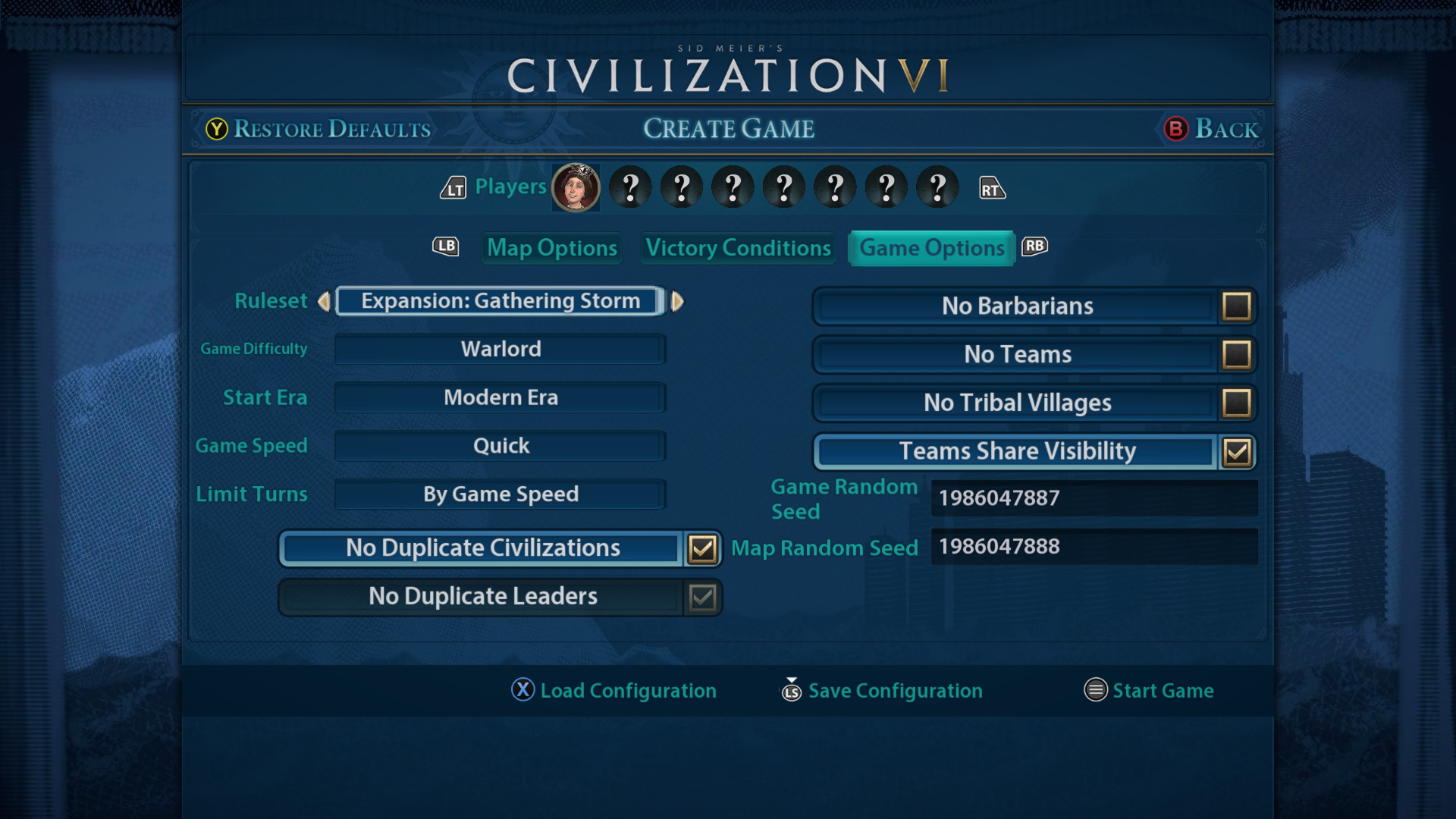 Scenarios offer unique rulesets and victory conditions for solo and multiplayer, but the meat of the game is the ability to craft your own world to conquer, over and over again.

Visually, Civilization VI is no looker, with the focus clearly on easily navigable interfaces and displaying hex information. From a distance, everything looks great (if cluttered) but the cartoony visuals look bland when you zoom in, relying on cute animations to inject life into the world. On the upside, performance was excellent throughout, blighted only by some lengthy loading screens (prepare to see “Loading, Please Wait” a lot before you get into a game). The series has always featured incredible music and the orchestral backing to Civilization VI continues that trend.

Unfortunately, there are two interrelated issues with the console port of Civilization VI. I brought up the Civilization Revolution comparison in the opening paragraphs as that streamlined approach worked well on console, ensuring a brisk flow that made solo and multiplayer matches satisfying (if perhaps shallow over time). Civilization VI offers a solo player everything they could ask for, but the slow pace of matches makes sustaining multiplayer sessions a challenge. You can adjust the match settings to reduce the total number of turns before determining victory conditions, but the fewer turns you have, the longer each player is likely to spend strategizing during their turn. It’s best to organise a schedule for multiplayer sessions with mates beforehand or use the local “hotseat” mode if you want to see a match through to completion. Over a week, I never found more than a dozen games in the multiplayer lobby, most of which had only a single player waiting for others to join.

It’s best to organise a schedule for multiplayer sessions with mates beforehand or use the local “hotseat” mode if you want to see a match through to completion.

Secondly, while the pricing of the base game and expansion is in line with the PC versions, those are frequently on sale and can be bought bundled together for less than the price console players are expected to pay for just the base game at launch. Given some of the best rulesets are in the expansions, and Civilization VI is already targeting a niche market in the console space, I feel the game would reach a larger audience if sold as a “complete edition” at a lower price point. I’ve no doubt the pricing is also contributing to the low player count online. 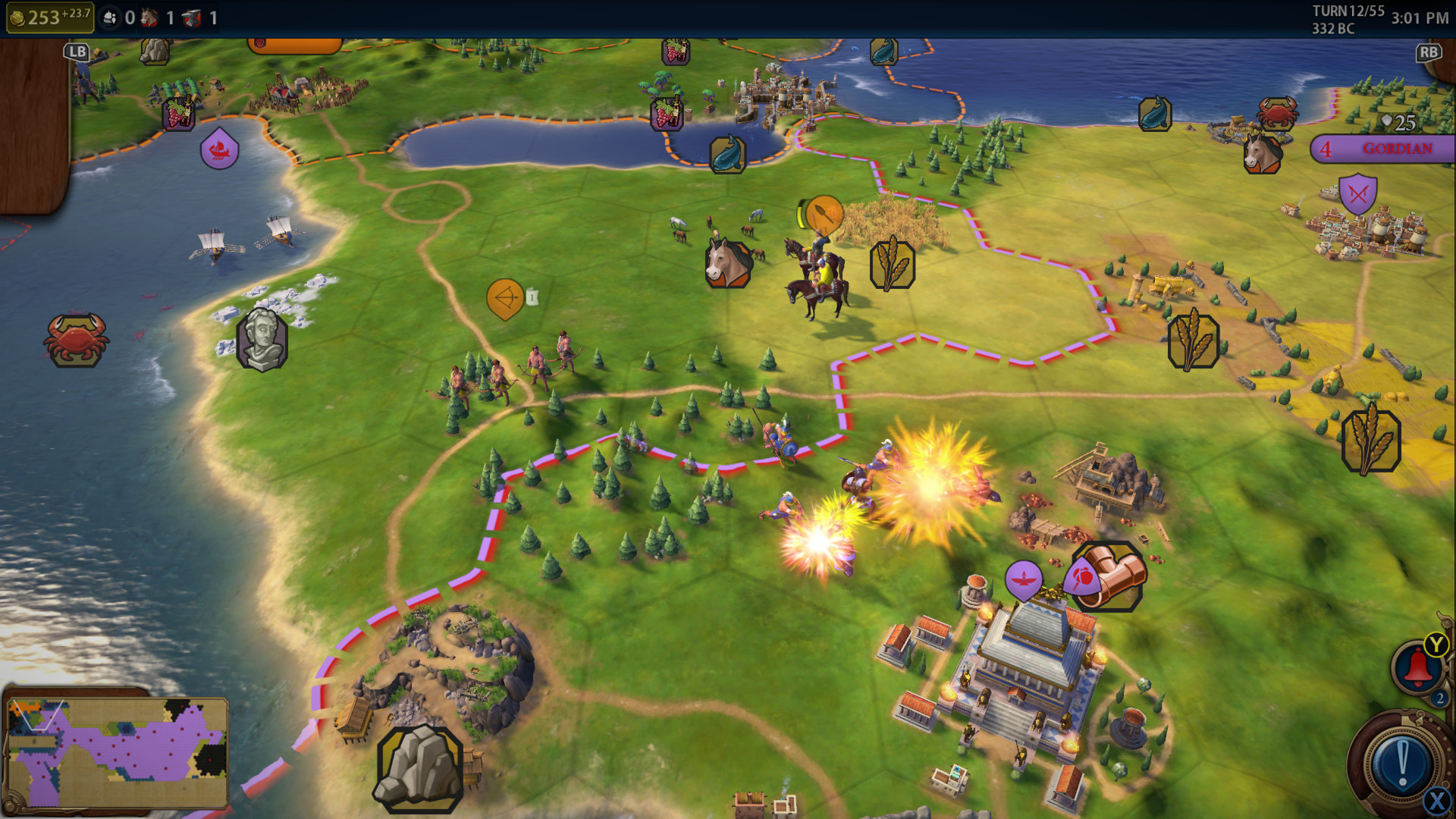 The visuals are colourful, well-animated, and charming, but Civilization VI is more interested in conveying information to the player than flashy visuals. On the upside, performance is stable.

Ultimately, Civilization VI is an excellent port that offers up all the complex, turn-based strategy that was previously exclusive to PC. It’s the full-fat experience, looks and runs well, and there are only minor control gripes when commanding armies. However, this complexity makes online play cumbersome, and the price feels too high to draw in cautious console players, especially with so much great content locked away in an equally expensive expansion bundle. If you were a fan of Civilization Revolution and want a more complex, solo-focussed experience, Civilization VI is easy to recommend and the expansions are a must-buy. If you’re someone with limited gaming time, it might be better to wait for a sale or a bundled complete edition to make the most out of your purchase.
8.4

The full-fat Civ experience on console

No performance issues, even on base consoles

Priced too high to draw in new players 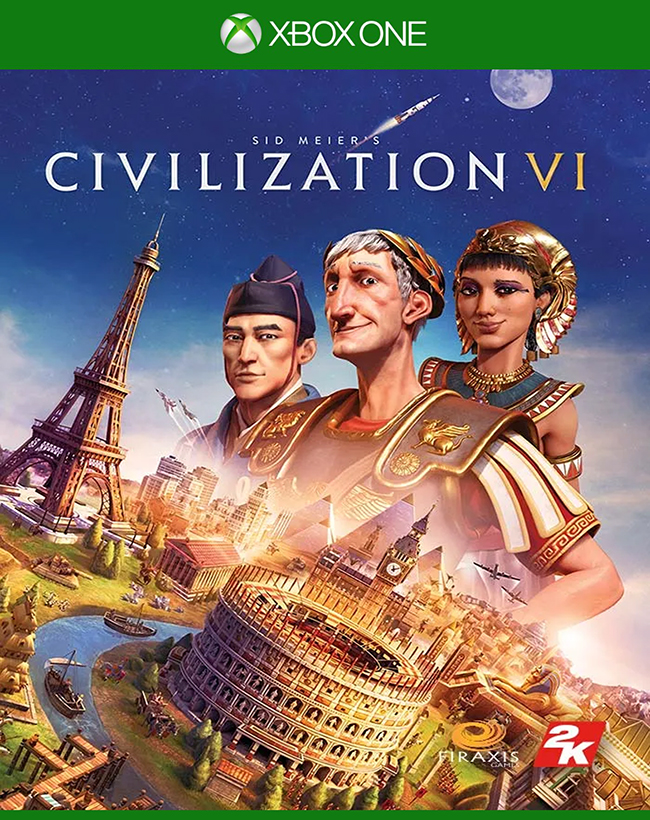