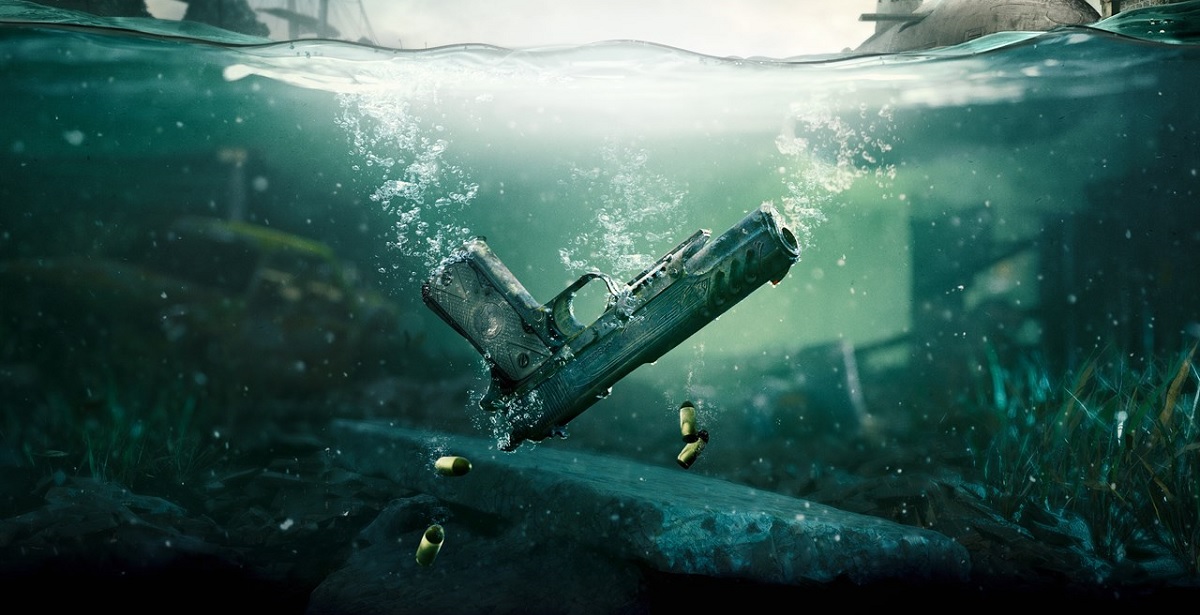 The Metro games have always been an acquired taste, equal parts clunky first-person shooter, grueling survival-horror game, and narrative-heavy adventure. With Metro Exodus, 4A Games took the action out of the titular metro and across the remains of post-apocalyptic Russia, with mostly positive results. Dark, labyrinthine, mutant- and bandit-infested tunnels, interspersed with quick jaunts across the irradiated surface, were replaced with breathable air and open spaces, made no less deadly thanks to a myriad of new enemies and natural hazards. With the expansions, 4A Games have reigned it in and focused more on what made the prior games great, with The Two Colonels offering up a classic but brief Metro dungeon-delve, and now Sam’s Story, which offers a more focused trek through a tsunami-devastated Vladivostok, as the titular protagonist tries to find a way back to the USA to find out what happened to his father. 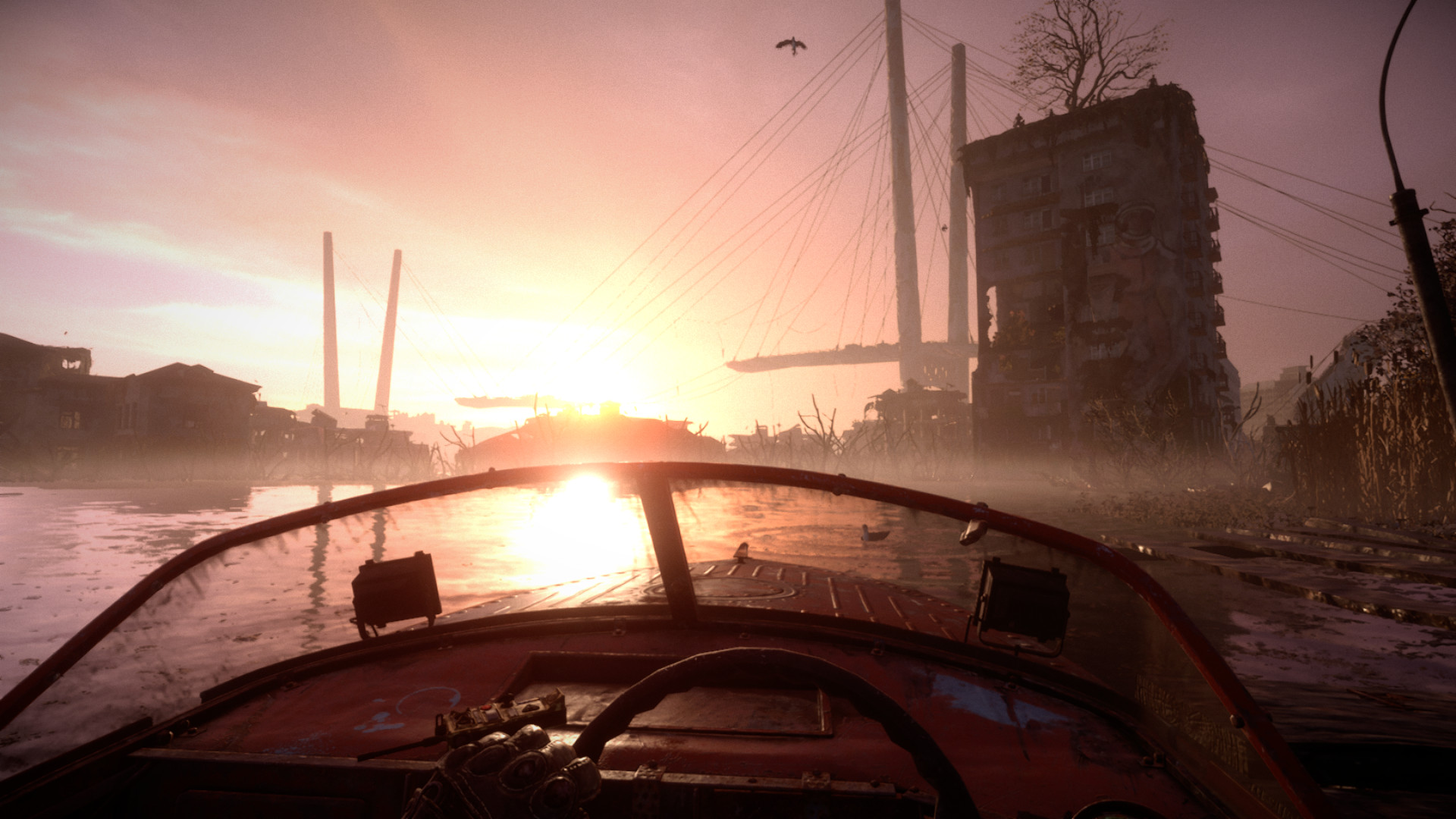 When the radioactive storms pass and the sun comes out, the ruins of Vladivostok can look unexpectedly beautiful.

Arriving in the ruins of Vladivostok, Sam stumbles upon the recently deposed captain of a nuclear-class submarine that could be his ticket home. The problem? The new captain, another American and former gunrunner Tom, has his own plans to use the sub and its arsenal as leverage to take control of other settlements. Despite his dubious intentions, and lacking any other options, Sam agrees to negotiate with the old captain and help him find several fuel rods needed to power the engines. This opening narrative-heavy opening kicks of a lengthy slog along the shoreline; boating along submerged streets, fighting through ruined, half-flooded buildings; trudging along the mutant-infested shore; and descending into the bowels of irradiated government bunkers.

Unlike the base game and The Two Colonels expansion, Sam’s Story only has a few lengthy dialogue scenes, even less optional conversations, and the bulk of the story is conveyed over the radio...

The journey is linear, despite the size of the environment, and feels like a blend of the “Volga River” and “Taiga” chapters in Metro Exodus – a wide path, with a plenty of diversions along the way, that ultimately keeps you moving forward. This ensures gameplay is interspersed with frequent narrative beats, a few quirky encounters, and plenty of opportunities to restock on the supplies you’ll need to survive. Unlike the base game and The Two Colonels expansion, Sam’s Story only has a less lengthy dialogue scenes, fewer optional conversations, and the bulk of the story is conveyed over the radio while you’re exploring (made that much easier with a voiced protagonist). It feels like a logical fit for the urgency of Sam’s mission, and the pacing is much better for it. As this is a Metro game, you can also expect your actions to affect your standing with the old captain and there is a tough, morally-ambiguous choice to make in the final moments. 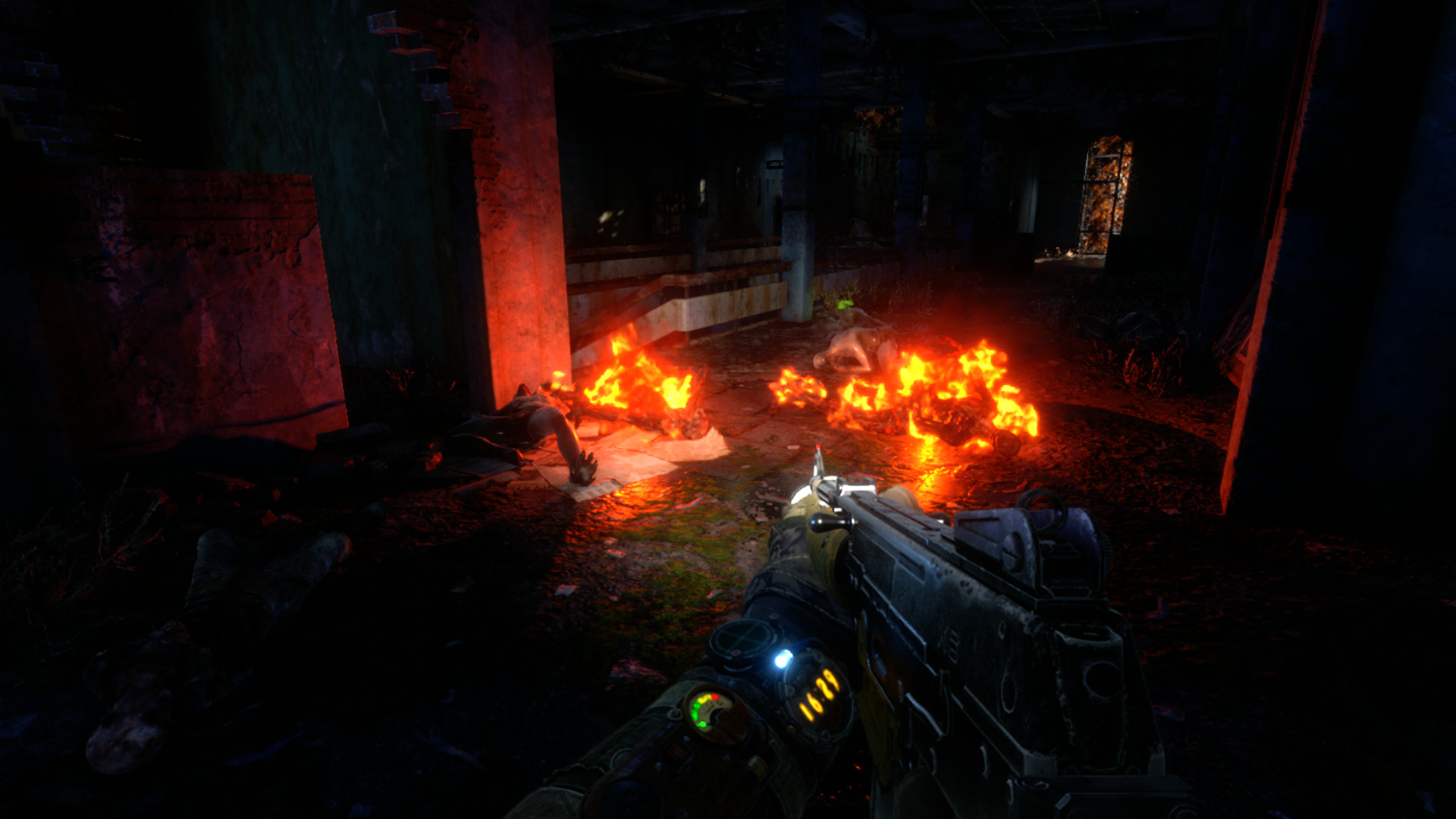 Incendiary rounds are immensely powerful against mutants but you’ll want to save every bullet for the end-game.

The core gameplay loop is somewhat dependent on your chosen difficulty but, irrespective of your choice, you’ll still want to scrounge for crafting supplies, gear upgrades, ammunition, med-kits, and air filters. A burst-fire assault rifle with incendiary bullets and a versatile .45 pistol are new weapons, while stealthy players finally get a flash-hider and suppressor for the bolt rifle! Thankfully, as in Metro Exodus, these side jaunts feature plenty of environmental storytelling, unique encounters, secret supply stashes, and are often the creepiest places you’ll visit.

There’s also only 2-3 of them between the key story events, ensuring you're never distracted from the task at hand. You’ll go from a dockyard settlement to a bandit-infested theatre, battle through waist-high water and mutants in dark basements, traverse a swamp draped in poisonous mist, and descend into a nuclear facility occupied by a terrifyingly new variant of Metro’s spider-scorpion hybrids (seriously, save those incendiary rounds!). You’ll also have to fend off a unique “demon” several times - larger and tougher than those seen in the prior games, and accompanied by an annoying flock of mini-demons.

As with the prior games, I’d recommend you pick a difficulty that challenges you.

As always, Metro is at its best when you’re scrambling through an irradiated basement, with a cracked gas mask, filter alarm blaring, the last two shells chambered in your shotgun, and a growling mutant hidden somewhere in the dark ahead; or when you’re darting between dark rooms as human foes search for you by torchlight, firing blindly, calling you out for your cowardice, and swearing to avenge their fallen comrades. As with the prior games, I’d recommend you pick a difficulty that challenges you. Knowing that you’re a single claw or bullet away from death, while simultaneously being aware that each bullet in your inventory is a possible kill, perfectly encapsulates the Metro experience and pushes the survival-horror elements to the forefront (which have always been better than the shooting). 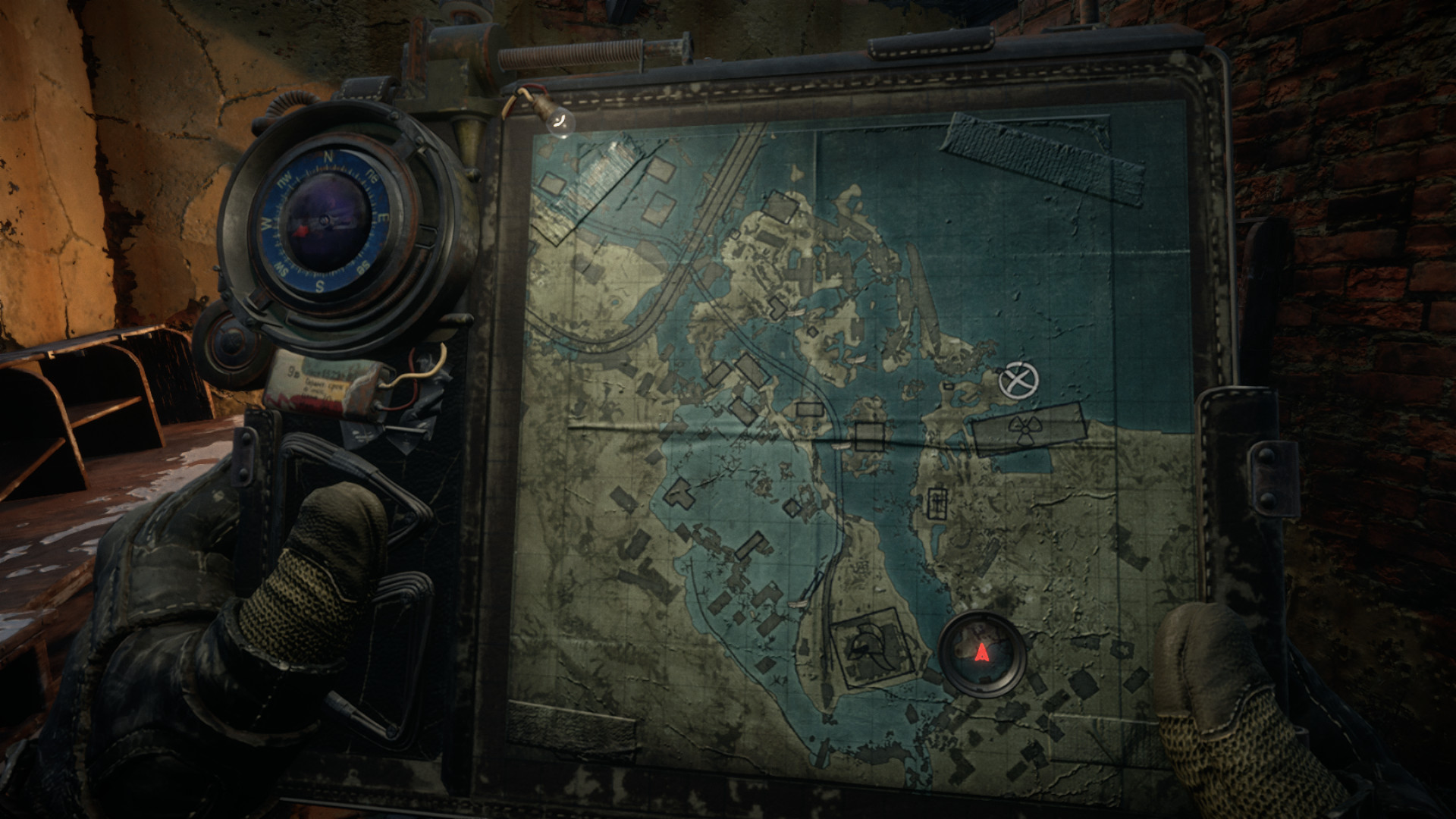 Vladivostok is much larger than it first appears and only gets tougher to traverse as you head eastwards.

The few issues I have with the Sam’s Story expansion are technical ones. Several patches since launch ensure the game still looks good and the performance only dropped noticeably for a minute or two in one late-game area on my original Xbox One. However, as the Vladivostok map is huge, the loading times are on par with the “Caspian” chapter from the base game. You can comfortably go make a cup of tea during the initial load but, thankfully, reloading after death only takes about 15 seconds. For avid explorers, you’ll also run into annoying invisible walls and there are a few opportunities to get stuck in geometry, leaving you to button mash your way out.

Despite these few issues, fans of the prior games – and especially those that loved Metro Exodus – should consider Sam’s Story a must-buy, managing to exceed the scope and quality of The Two Colonels in all aspects. You’re getting a grueling but enjoyable 6 to 8-hour story (pushing 12+ if you explore everywhere and/or tackle the game on higher difficulties) in a fantastic new setting, with some fresh set pieces (and a few familiar ones). If you’ve been looking for a reason to return to the world of Metro, Sam’s Story is a perfect microcosm of the base game, and a great way to wrap up the story started in Metro Exodus. Now I’m just hoping Artyom and co. plan to return to Moscow to liberate the Metro in the next game.
9

Sam is a likeable protagonist

A strong narrative keeps you on track

The same grueling yet compelling mechanics as Metro Exodus 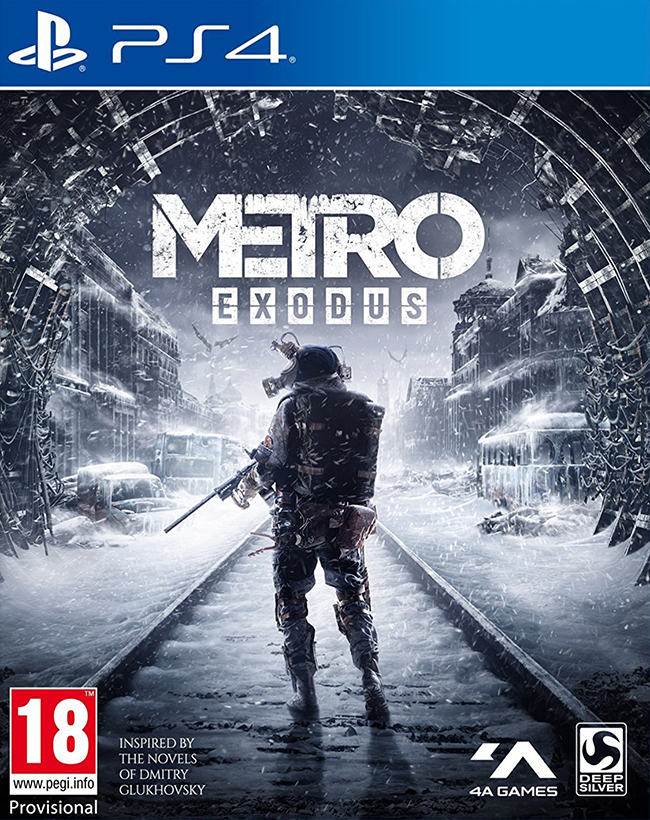