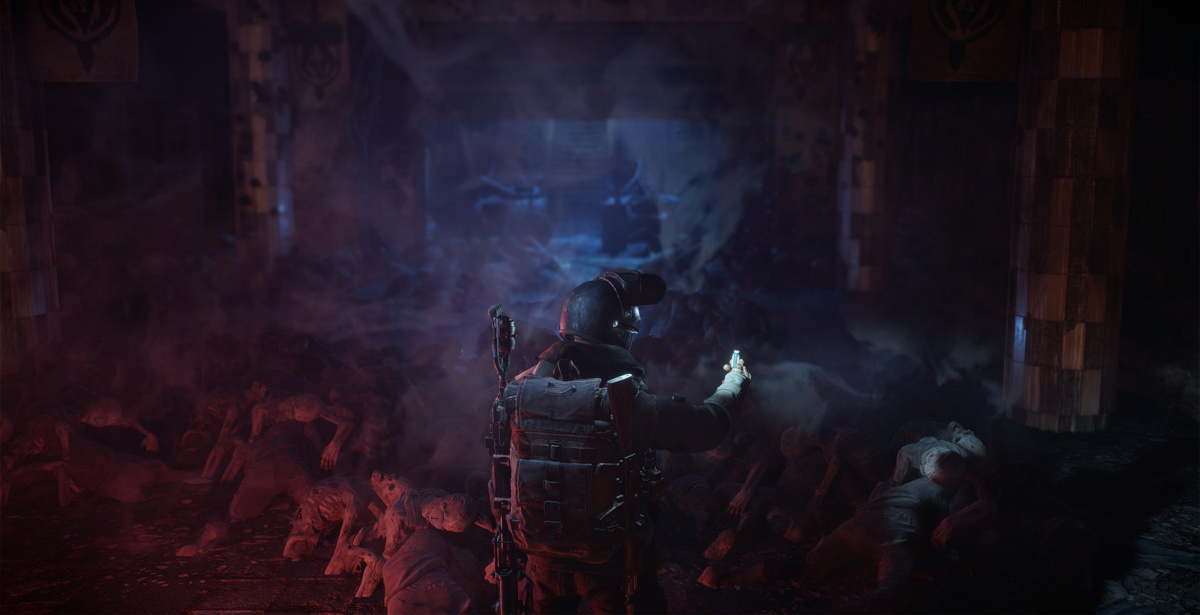 I thoroughly enjoyed my time with Metro Exodus earlier this year, even though the claustrophobic tunnels of the metro were mostly replaced with grueling trips across a hostile surface. That said, some of the most memorable encounters were still those that took you back underground, navigating mutant-infested tunnels by torchlight, counting every shot and impact, as your ammunition and medical supplies dwindled. The Two Colonels DLC doubles down on that classic tunnel-crawling design and then some, expanding upon the events in the rushed last chapter of Metro Exodus, and providing Colonel Miller with some much-needed closure.

It’s worth noting upfront, The Two Colonels DLC has a strong narrative focus. In the three and a half hours it took me to complete on Ranger Hardcore difficulty, I probably spent a third of that time engaged in dialogue or exploring the Novosibirsk stations, eavesdropping on conversations to eke out a little more of the backstory. 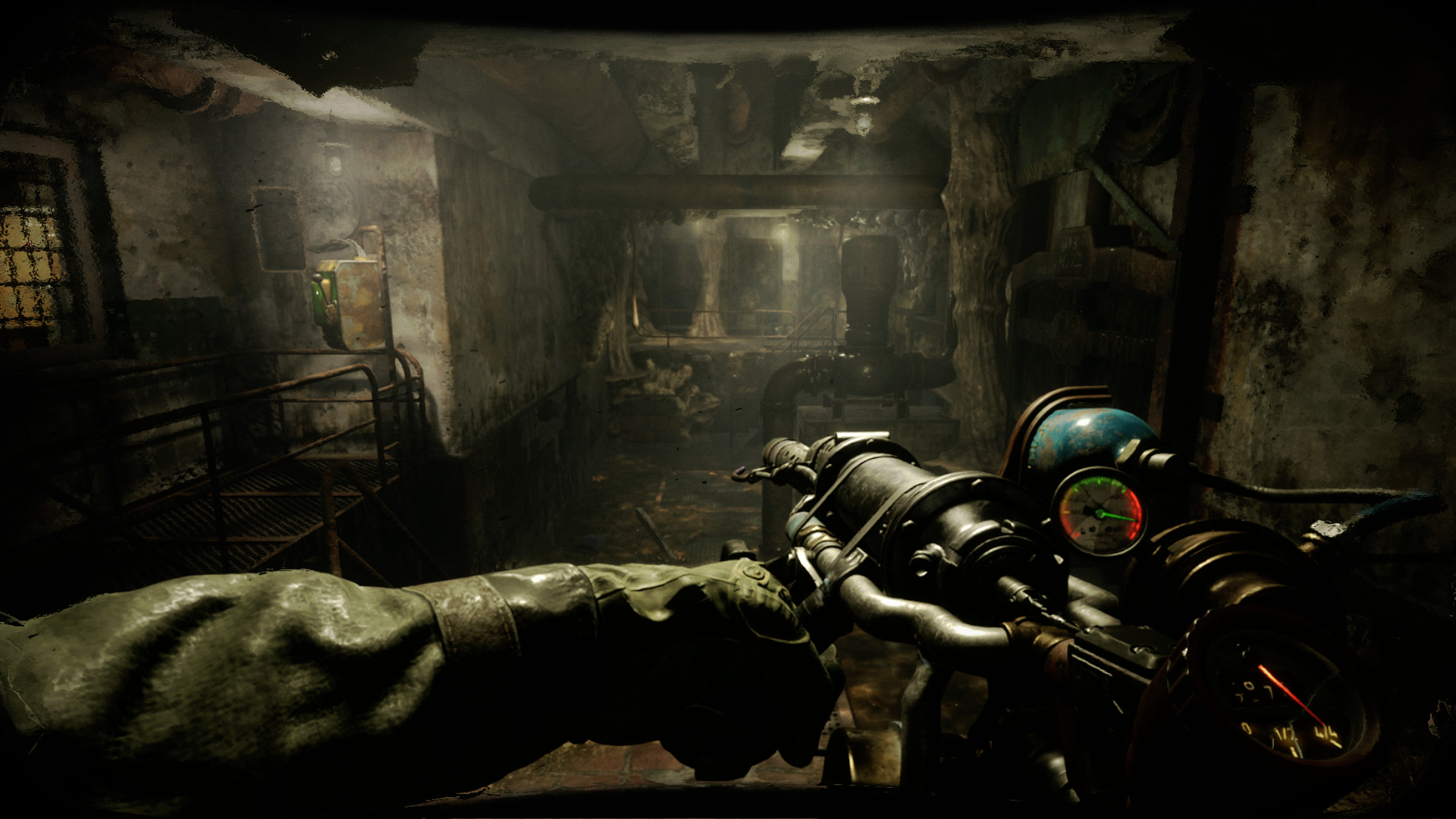 From the opening moments, you know 4A Games is going back to what made the prior Metro games great.

Sadly, you don’t actually get to play as Miller - his journey plays out as cutscenes that transition into flashback sequences, placing you in control of Colonel Khlebnikov. You’ll discover what kind of father he was to Kiril (the small boy you encounter in Exodus), the political machinations that led to the downfall of Novosibirsk, his own conflicted morals, and his final mission to find satellite maps that offer the chance of finding a safe new home for himself and his son.

Despite having no playable sections, Miller still gets plenty of time to ramble to himself (and therefore the player). You’ll witness his change from a soldier who spent his life putting the mission before parenting, to a father who realises everything he does is now for his children. Despite the ending of Metro Exodus touching on this transition, The Two Colonels fleshes out his final hours, as he retraces the steps and decisions of Colonel Khlebnikov, realising the impact it had on his son. Covering the fall of Novosibirsk also allows the writers to discuss the parallels between the political elite in Moscow and Novosibirsk, an element of the Metro 2035 novel that was touched on but swiftly forgotten after the prologue in Metro Exodus. 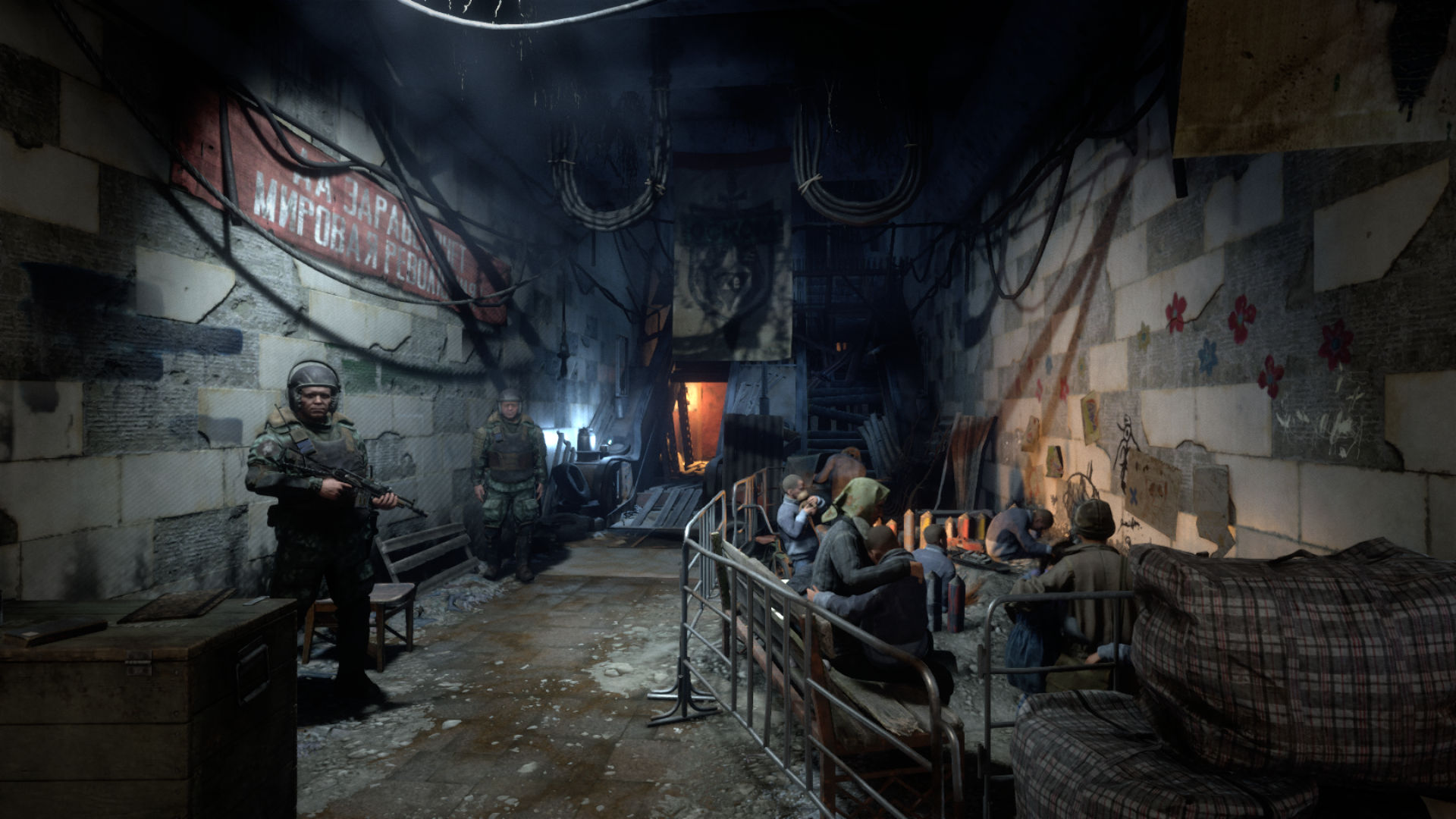 The downfall of Novosibirsk makes for a dark tale. Don't expect any of the hopefulness that permeated Metro Exodus.

If the narrative doesn’t interest you (why are you playing a Metro game?), you’ll still find the gameplay thrilling. Two of the three chapters return to the tense and claustrophobic tunnel-crawling that left you feeling so isolated and vulnerable in the prior games. Colonel Khlebnikov - despite his title and the respect he commands - is not afraid to get his hands dirty. The opening moments place you in a stairwell, descending into the slime-infested drainage tunnels around his home station, on the hunt for a fully-grown worm that stalks you throughout the chapter.

For those having horrible flashbacks to the infested tunnels in Metro Exodus, rest easy. This time, you’re on foot and have a flamethrower - a weapon with a pilot-light that serves as your only source of illumination in the dark. As your only form of defence, you need scavenge and ration fuel, hunt for upgrades, and keep it clean; a simplified take on the crafting in the main game. For those who played the excellent “Spider Lair” DLC for Metro: Last Light, these chapters feel pleasantly familiar. 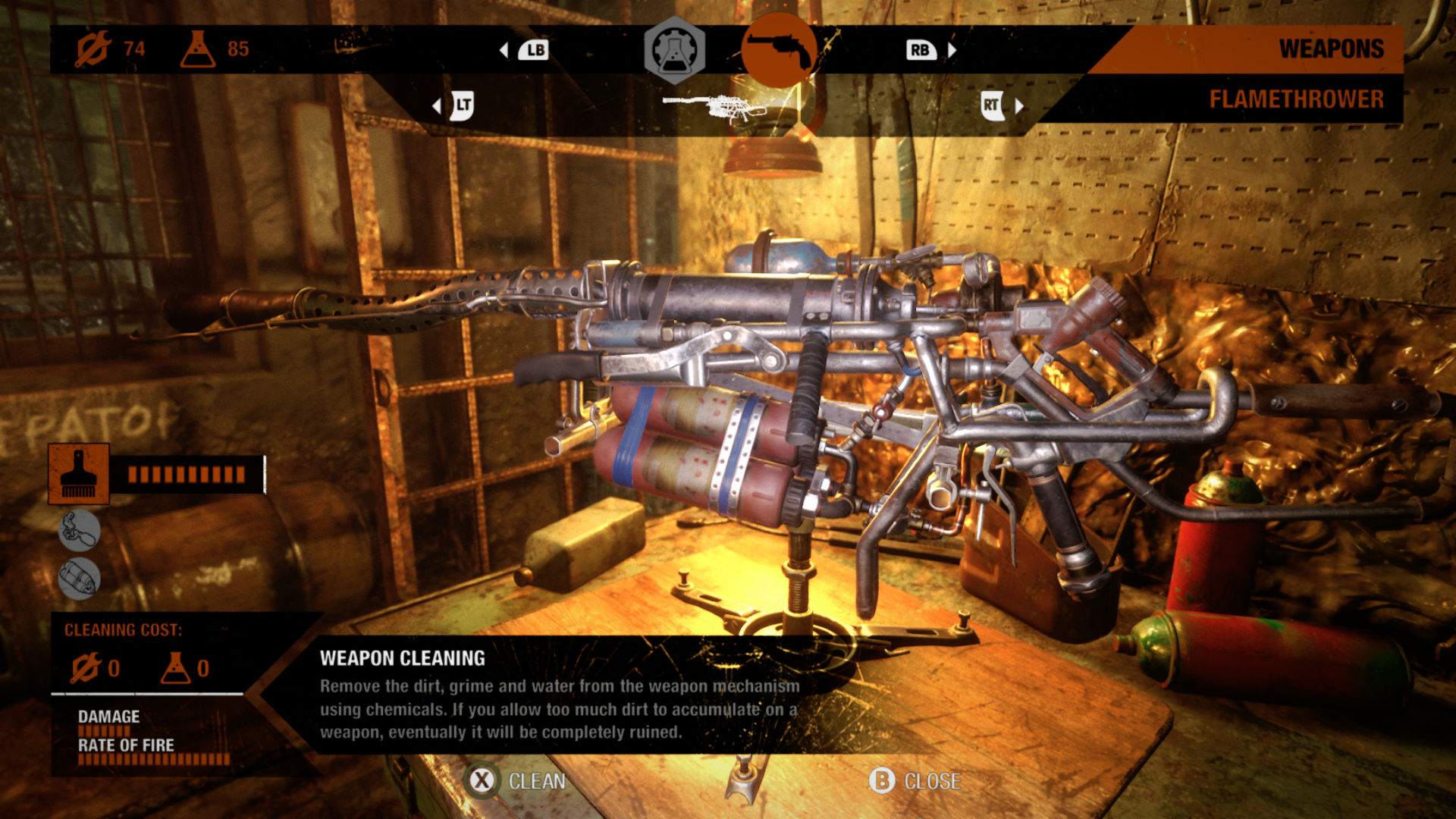 Meet your new trusty friend – a flamethrower that sets slime and worms aflame (obliterating them with a satisfying popping sound), and sends Nosalises scampering away, on fire and howling.

The second chapter is a mix of narrative and action as you witness the situation in Novosibirsk deteriorate into all-out war, before the final chapter sees Colonel Khlebnikov head into the bunker below the local satellite station, on the hunt for radiation maps of the Lake Baikal region - the same maps that Colonel Miller sets out to find after separating from Artyom in Metro Exodus. This mission once again leaves you alone in the dark, with only your trusty flamethrower, up against mutants far more threatening than slime worms.

As with the prior games, playing The Two Colonels on a difficulty you find easy is doing a disservice to the atmosphere they're trying to generate. These games often receive criticism for their clunky movement and shooting, but they’ve never tried to be FPS games - they’re closer to survival horror, demanding you pay attention to avoid excess damage, while forcing you to scrounge around for every clip of ammunition you can get your hands on. You’ll want to pick a difficulty that challenges you, and remember, you can still quick-save on every difficulty except Ranger Hardcore. 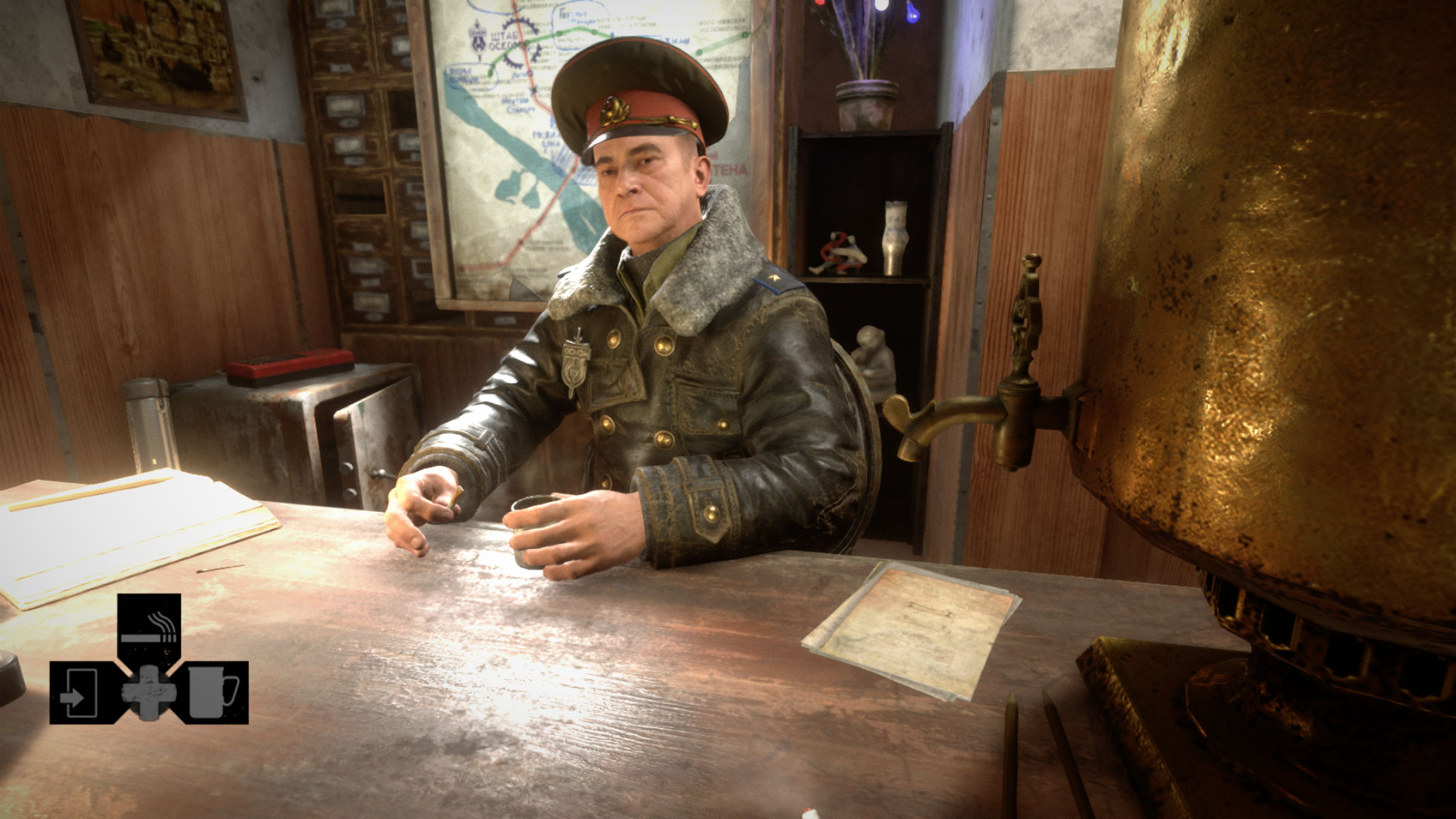 As with the prior Metro games, if you don't have the patience to stop and listen to the numerous NPCs, you're going to miss out on the fine details.

The last thing to touch on is the presentation and, aside from some rare audio crackling I had on the Xbox One, The Two Colonels uses Metro Exodus’ upgraded engine to great effect. The subterranean tunnels and metro stations have never looked so good, or felt so atmospheric. The visuals are complemented by great audio and a musical score that echoes parts of Artyom’s final mission - tying events together and enhancing the impact of Miller’s final moments. For those who found technical issues an annoyance in Metro Exodus, the reduced scope of the environments and level-based structure ensures performance and load times are much-improved.

All things considered, you’ll find very little wrong with The Two Colonels DLC, unless you didn’t enjoy the series to start with. I’d loved to have been able to play as Colonel Miller and spotted some Dark Ones again (maybe they’re there?), but it’s available for dirt cheap (R65 on Steam and Xbox Live; R129 on the PSN store because they’re idiots), offering up three hours of condensed Metro gameplay, and a narrative that both enhances the ending of Metro Exodus and fleshes out one of my favourite characters.
9

A return to claustrophobic tunnel-crawling

Fleshes out Colonel Miller and enhances the ending of Metro Exodus 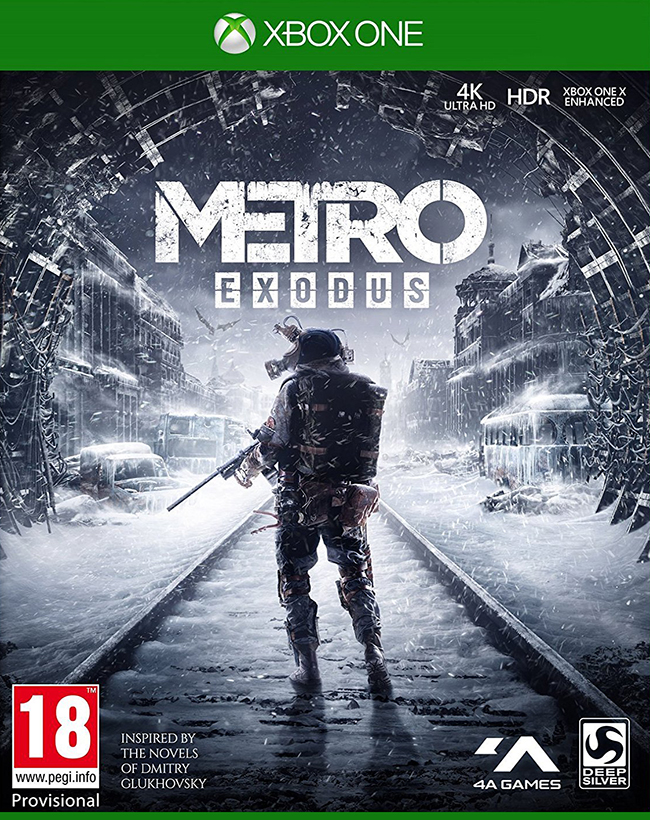