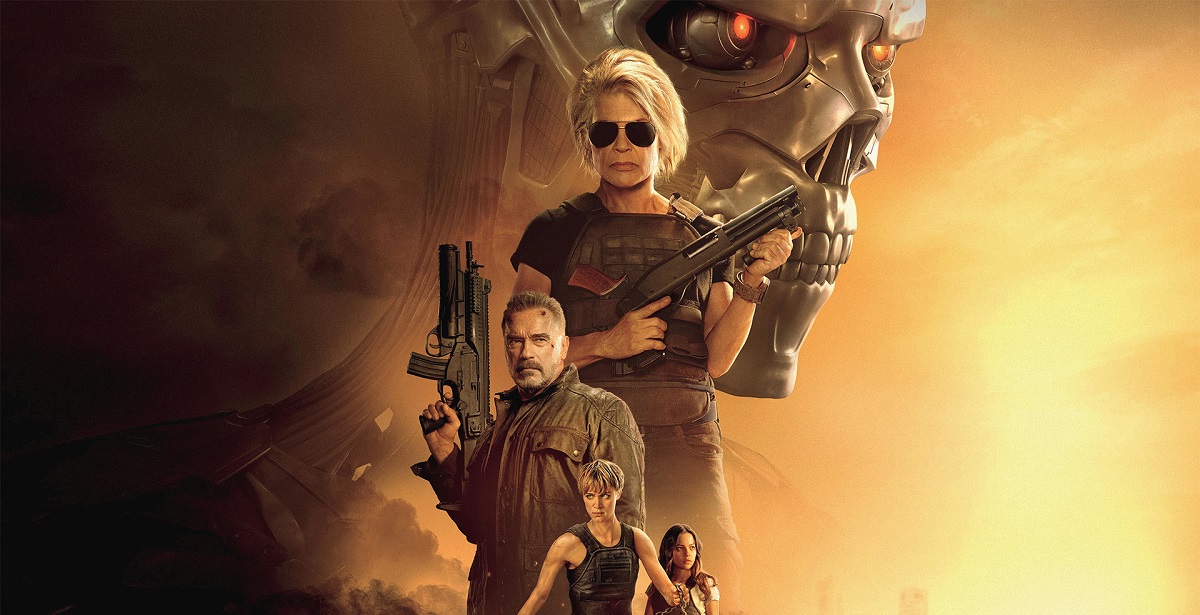 The Terminator, in all its guises, is an iconic villain, a symbol of technology gone awry. A theme that seems to gain in importance daily as we learn of the latest advances in AI and machine learning, the rising ubiquity of Deep Fake created videos and the use of social media to manipulate us. The idea of a computer taking over all our systems and deciding to wipe out humanity seems less a product of a fever dream and more our inevitable fate as the days pass. 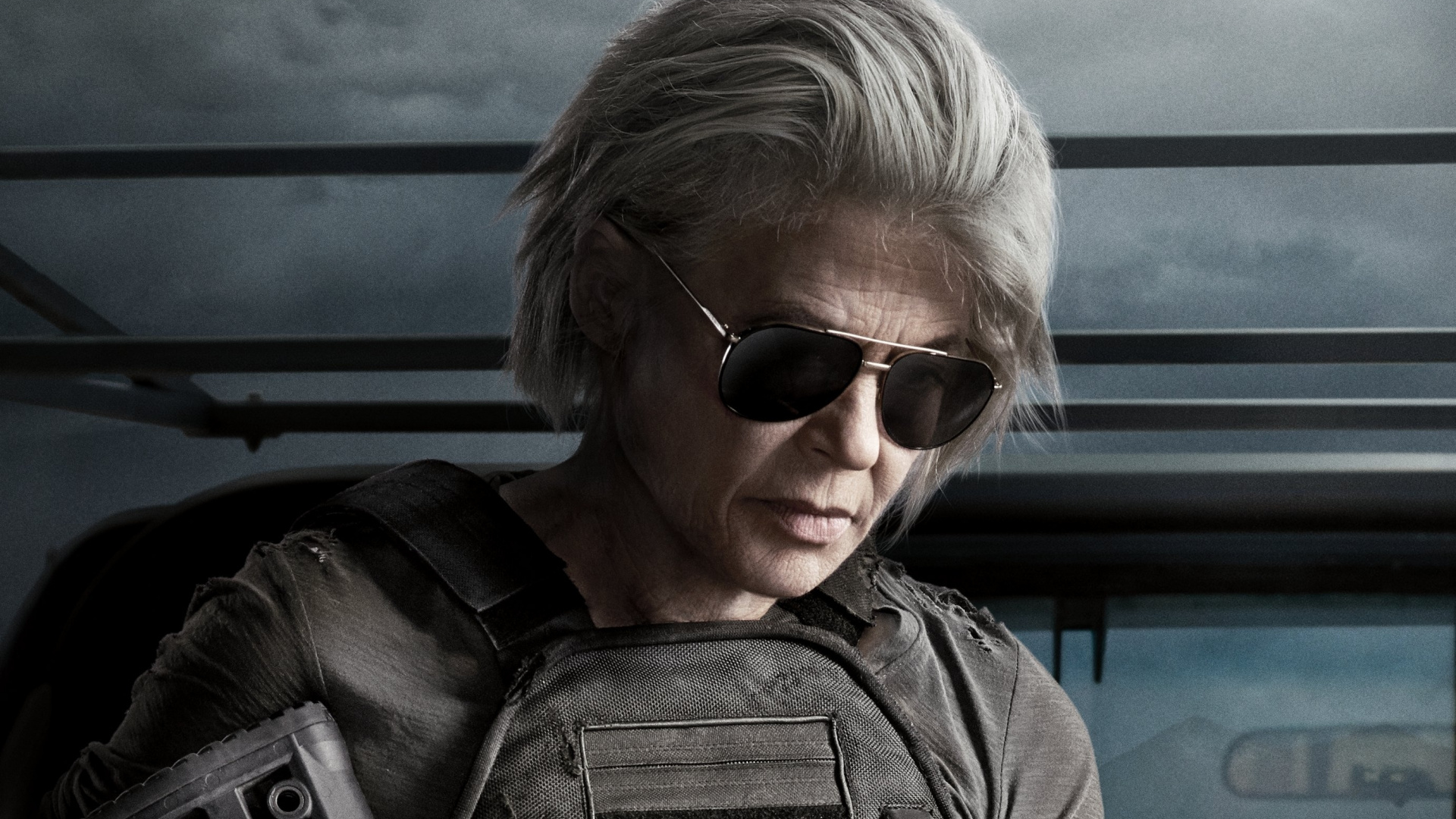 The best Terminator stories have always been a simple one – Man & machine are sent from the future, one to protect and one to destroy. This simple starting point leads to a simple chase film as the Terminator relentlessly hunts down its target in a game of cat and mouse with some hapless current time VIP trying to understand why their life has just been turned upside down. The writers of Dark Fate have looked at what worked in the previous films and followed the chase film blueprint to a “T”. It also adds in some details from JJ Abrams' The Force Awakens blueprint to the mix as it introduces new characters and concepts to take the series forward, all while leaning heavily on our nostalgia for what came before to win us over.

The writers of Dark Fate have looked at what worked in the previous films and followed the chase film blueprint to a “T”.

Unfortunately, the film, while the best sequel since T2 (for what that’s worth) is not as competent at executing this nostalgia-fueled blueprint. This isn’t to say that the film is bad per se, it is just not the film that is going to scratch that Terminator itch we’ve all had since 1992. 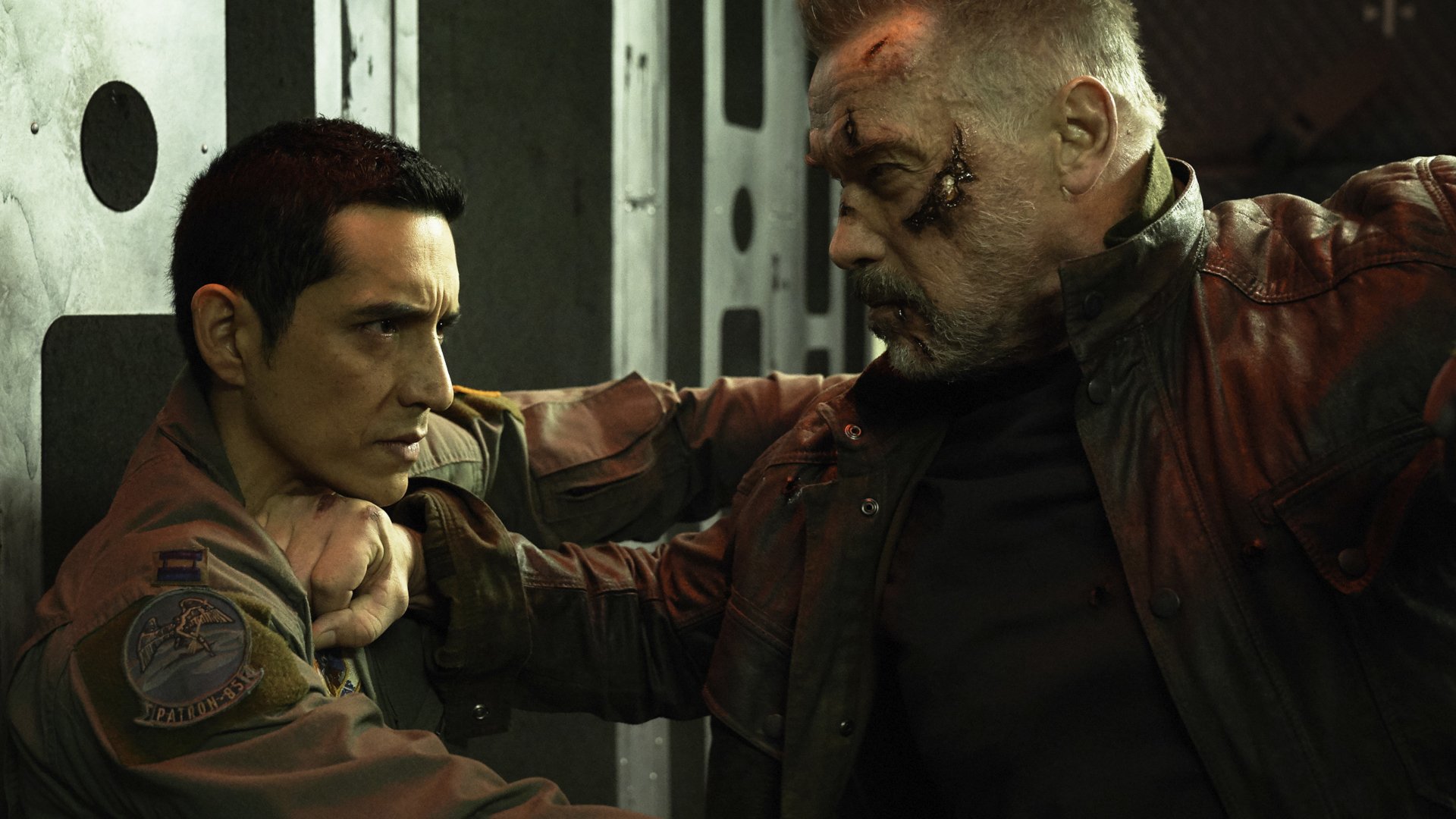 The story follows the classic Terminator formula: a resistance fighter named Grace is sent back in time to protect a key person from a Terminator who is faster, stronger and simply unstoppable, until it isn’t. Mackenzie Davis as Grace gives a good physical performance as an augmented human i.e. a true cyborg who can, for short bursts, stand toe to toe with Gabriel Luna’s Rev 9, the hybrid Terminator that can split into a T-1000-like liquid metal, shape changing killer and T-800 style endo skeleton. Both are equally deadly and add an interesting dynamic as the killing blow can come from multiple directions. The particular focus of these two warriors is Dani Ramos, playing the Sarah Connor role or so we think. Joining them (there’s the nostalgia) is the real Sarah Connor and an old Cyberdyne Systems Model 101 0 Arnold reprising his role as yet another T-800.

Where the film deviates, slightly from the formula, is in giving the machines a personality. Most obvious is Grace who, as mostly machine, is played as that target focused soldier from the future not trying to prevent the rise of the machines, but rather just protecting someone key to ending the war in the future. Why she doesn’t come back with information enabling her to target the rogue AI early on the way the machines target the humans is a mystery. Grace Mackenzie is decent, superb in the fights, but her constant pained expressions and refusal to actually impart any information is annoying. At least telling Dani why she is important would be a decent start instead of leaving it for a “twist” reveal that anyone can see coming from a mile off. 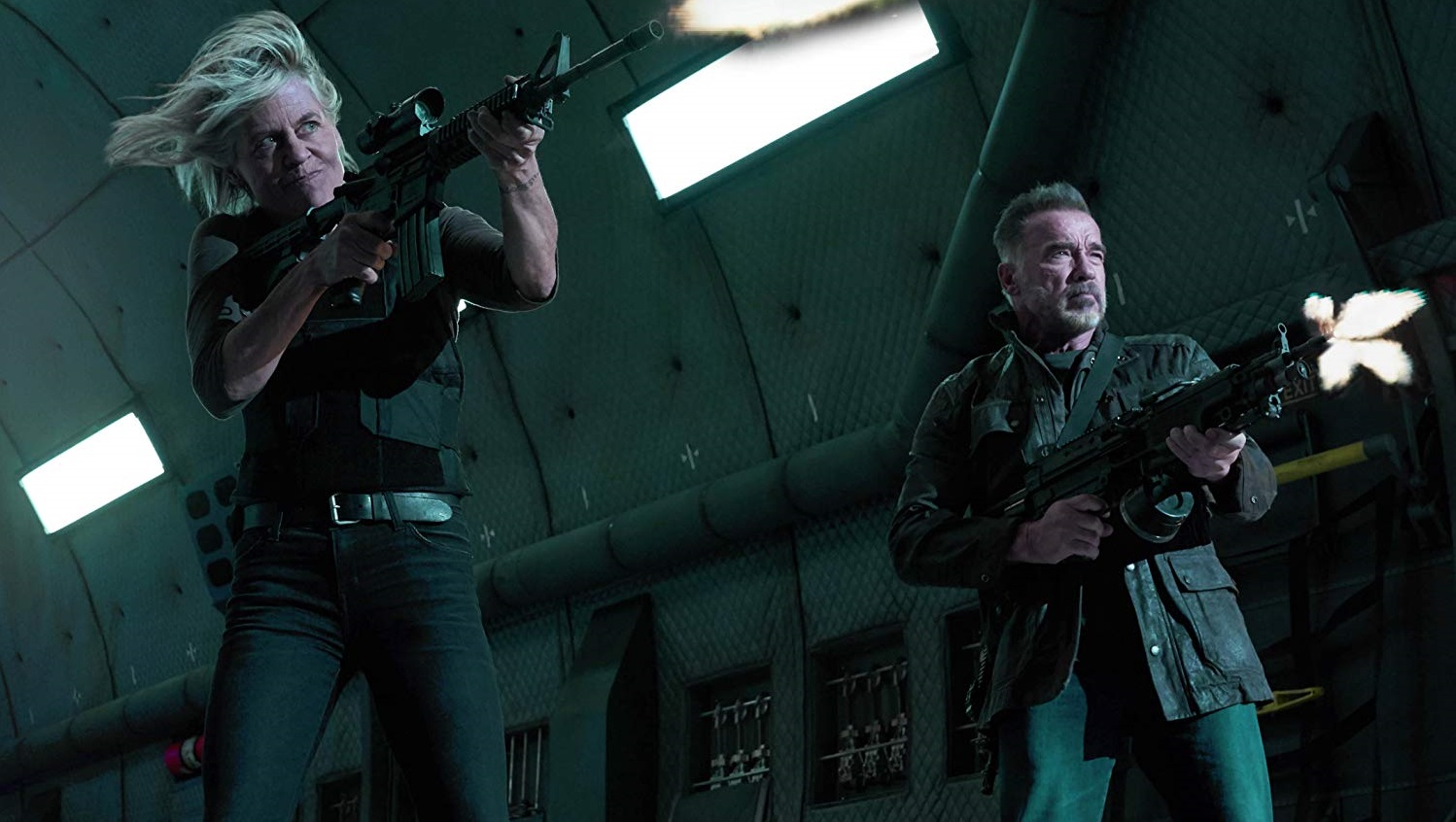 The Rev 9 itself has a personality, it jokes with people it encounters to put them at ease or break tension and cracks a smile. This should be a trait that makes us uncomfortable and scared – that a killing machine is capable of simulating humanity so convincingly, but Gabriel Luna isn’t given enough time or material to make us think that this is an infiltration upgrade. It seems more like the actor asking for and getting something more to do other than run, jump and fight so as to show off his acting skills.

...Arnold gives a great performance as Carl the Interior Decorator who just so happens to be a killing machine from the future.

This new approach is applied to the T-800. Details will spoil the film and a key scene, but Arnold gives a great performance as Carl the Interior Decorator who just so happens to be a killing machine from the future. Unlike Luna’s Rev 9, Carl is still played as a straight man in a comedy duo, the machine that takes things literally and matter of factly. His humour comes from situational humour, such as when he reminds his comrades that they are in Texas to explain his gun collection. The humour ensures that the film doesn’t take itself too seriously, but while you are laughing you realise that this just isn’t right and doesn’t fit, it’s just too much. 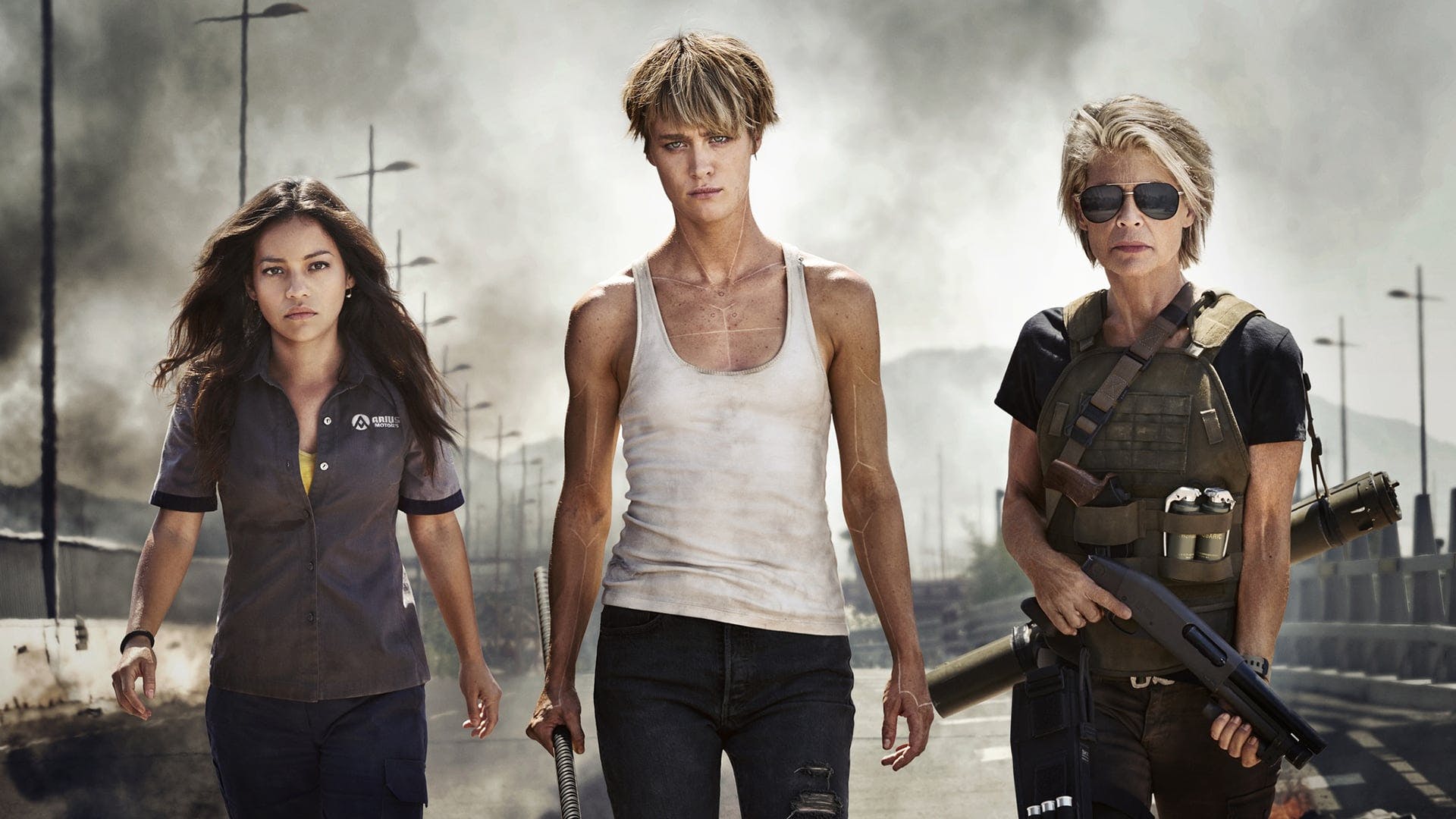 As Sarah Connor, Linda Hamilton is the standout performer. Her damaged, hurt, weary and overall Terminator-esque personality signifies a woman pushed beyond breaking point but who doesn’t know how to stop and get off this path that Cyberdyne, Skynet, Kyle Reese and her unborn son put her on. She is a warrior who doesn’t want to fight anymore but doesn’t know how to not fight. There is something robotic about how she goes through the motions, clearly waiting for the day that she dies.

Tim Miller’s action framing and sequencing is excellent - the fights between Grace, the Rev 9 and the rest are wonderfully shot and choreographed. With the fight team eschewing quick cuts, you can see all the action and follow it just as you should. What Miller has done though is rely far too much on the sequences from the original films. The first fight scene is reminiscent of the introduction of the T-800 in T2 and the truck chase scene is far too similar to the aquaduct chase in T2. And because of this, because you know how these sequences are going to play out, the film is never tense as you know the heroes are never in danger.

The first fight scene is reminiscent of the introduction of the T-800 in T2 and the truck chase scene is far too similar to the aquaduct chase in T2.

By going back to the original films for inspiration, the fact that we’ve seen this all before is just highlighted. In more skilled hands this would’ve been a theme to comment on the inevitability of the rise of the machines, but here it just comes off as someone copied Cameron’s homework and tried to hide that fact by changing a few things. No matter what you think of Salvation and Genesys, they at least tried to do something different to expand the mythology and take the franchise forward.

Dark Fate, like Genesys, is meant to be a soft reboot and in some ways, it succeeds as it cleans the slate and leaves the future an unknown, to be explored in future films. It sets Dani up as the protagonist to take the series forward and it relies on the past to set up a potential future but is far too formulaic and doesn’t make that future interesting enough. At least with Terminator John Connor in Genesys we got a glimpse of something unknown and scary and complex, but here, we just get moved from one treadmill to another. It may be different, newer, shinier, but we are still running in one place. If they truly want to honour the past and take these characters to new futures, they should’ve picked up Season 3 of Terminator: The Sarah Connor Chronicles, that gave us more bad*ss Sarah and opened new paths for the characters too explore.

Dark Fate is the third best Terminator film, which isn’t saying much. Wait for the home release and when you are bored or need some background noise while you clean the house or have to do some work, put it on.
6

Story is simple, just as it should be

Copy/Paste of previous films that relies on nostalgia

That scene before the title credits run. WTAF?!

Dani is a bit one-note and boring 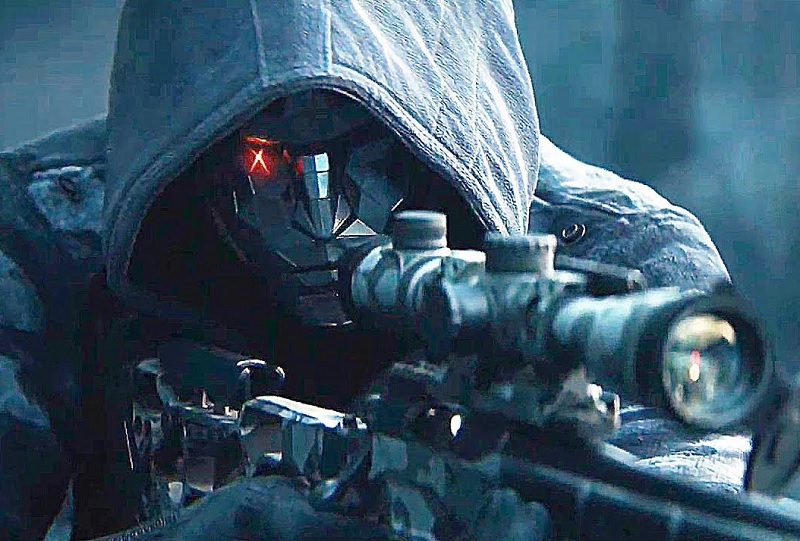 The Sniper Ghost Warrior series has been around for a while but hasn’t attained the popularity of the...