I hope they remember you. 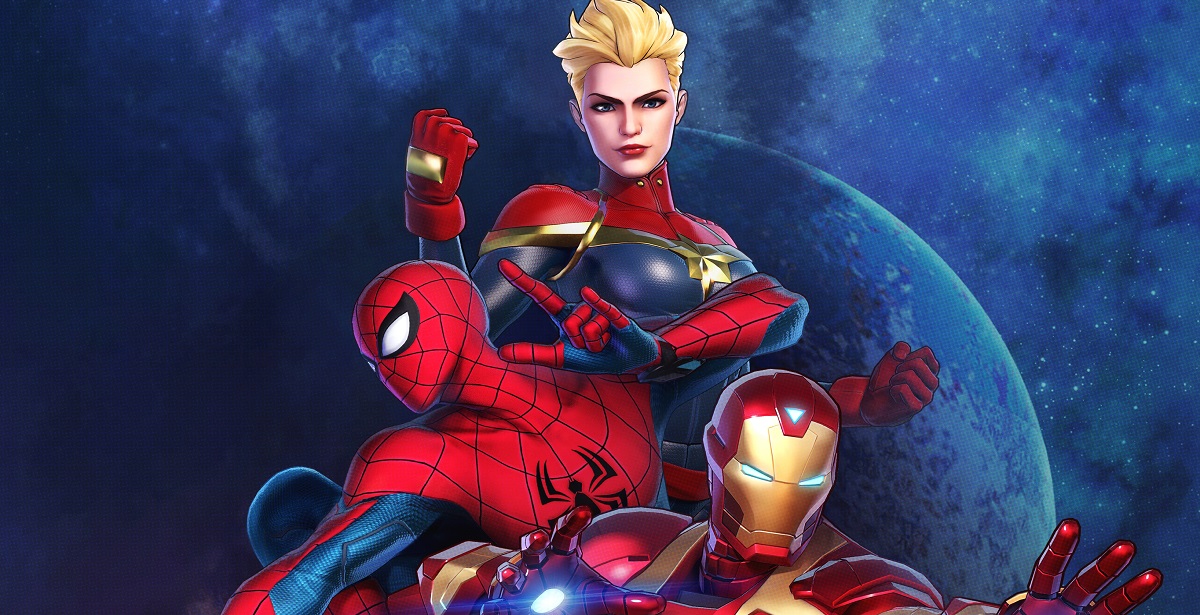 Marvel Ultimate Alliance 3: The Black Order - a game from a franchise that I thought left us a long time ago. Ultimate Alliance 3 doesn’t have an emotional story that redefines how you look at the Marvel Universe, nor does it set a new bar for superhero games. What it does, however, is give you a chance to be a kid in your bedroom filled with comic book posters, and just have some fun with your very own superhero team.

At face value, Ultimate Alliance 3 comes across as a game that launched in an era that has moved away from what it has to offer, but that’s exactly what’s so appealing about the latest release in the franchise. The game is a Nintendo Switch exclusive and it feels right at home on the platform, but there are a few issues that come with something so era-specific.

The story is an adaption from the classic Infinity Stones saga. While this may not be as impactful as the iteration we have come to love from the cinematic universe, Ultimate Alliance 3 does a good job with handling this many characters at once. You’re placed right into the action, as The Black Order wants to retrieve the Infinity Stones for their leader, Thanos. The narrative carefully plays with this basic concept, having you carry your team of superheroes across multiple locations (some of which even include other dimensions). 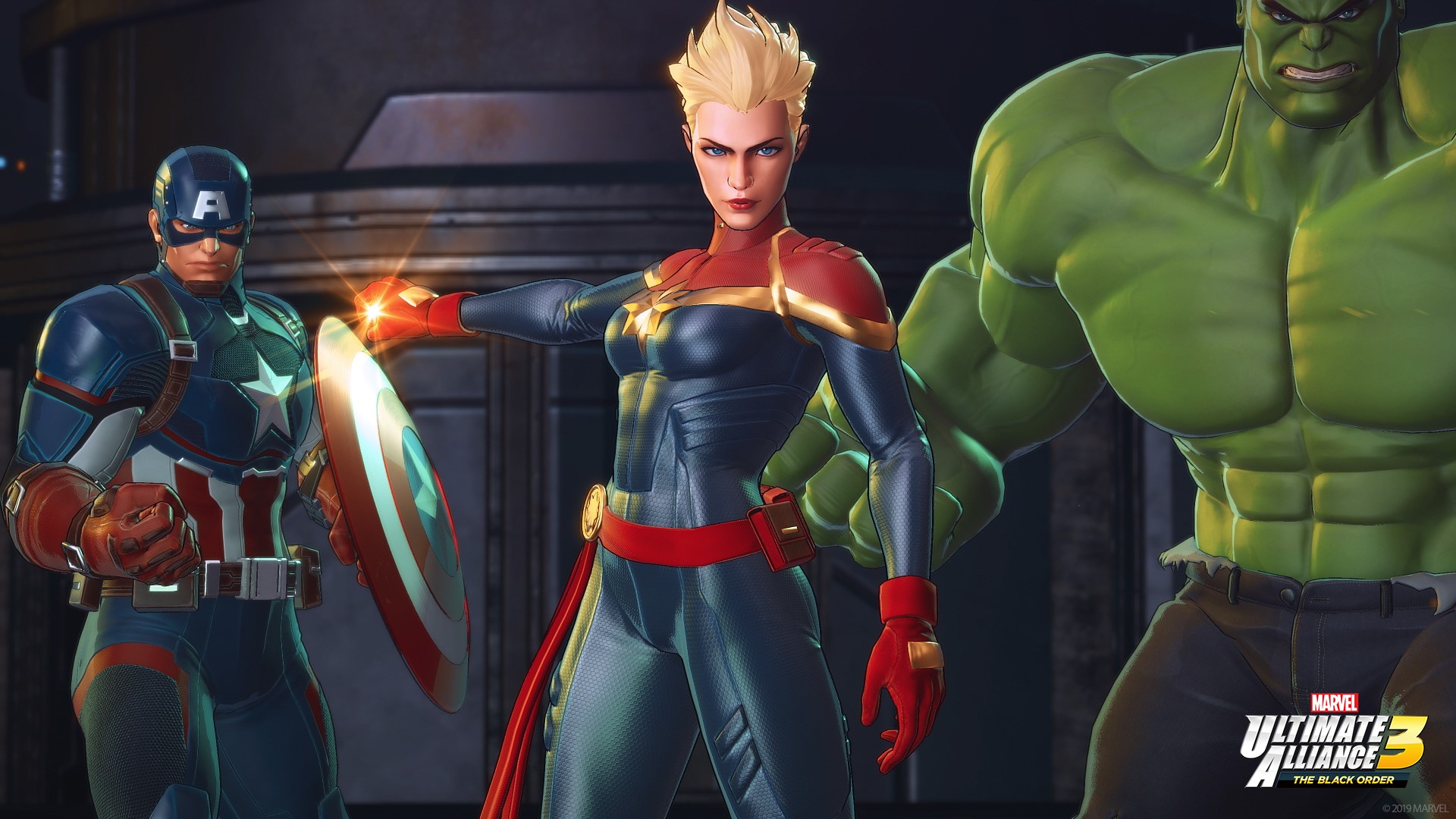 You’re not going to find much in the way of twists and emotional dialogue, but you never really feel like the story sets you up for that. Instead, the story is designed for you to get as much action as you can, with your tailor-made group of crimefighters always conveniently placed in the middle of it all. Rather than being the driving force of the game, the story just serves the purpose of providing an excuse to bring all these characters together. That being said, Ultimate Alliance 3 doesn’t do much in the way of changing the formula. It sticks to an isometric perspective, giving you subtle hints of an RPG, rather than being an all-out hack and slash game. Thanks to Ninja Gaiden developer, Team Ninja, the combat feels more involved. Your main objective is to eradicate the enemies that stand before you, but the combat is layered in a way that makes you think with more of a tactical mind. That being said, after you get a good idea of positioning and enemy attacks, the game starts to feel like mindless brawling with a lot of special attacks filling up the screen.

Environmental puzzles make a return, but there was a lot to be desired in this aspect. Many of the puzzles just revolved around flipping a switch or pushing a crate in the right place. That being said, I did like the fact that the puzzles never really removed me from the action. They may have been a little too easy, but your main purpose is just to punch some bad guys in the nose.

The roster consists of around 34 playable characters, each with their own unique abilities and playstyles.

The highlight of the game (and the aspect that has the most attention to detail) comes in the form of its heroes. The roster consists of around 34 playable characters, each with their own unique abilities and playstyles. You have tank characters like the Hulk to your agile characters, like Hawkeye and Spider-Man. You may think that you won’t need two characters who play alike, but even then, Ultimate Alliance 3 shines in its diversity. For example, Spider-Man and Spider-Gwen are both web crawlers, but Spider-Man is more of a ranged character who thrives in webbing up his foes, while Spider-Gwen has powerful attacks that range from punches to throwing wrecking ball-shaped webs. 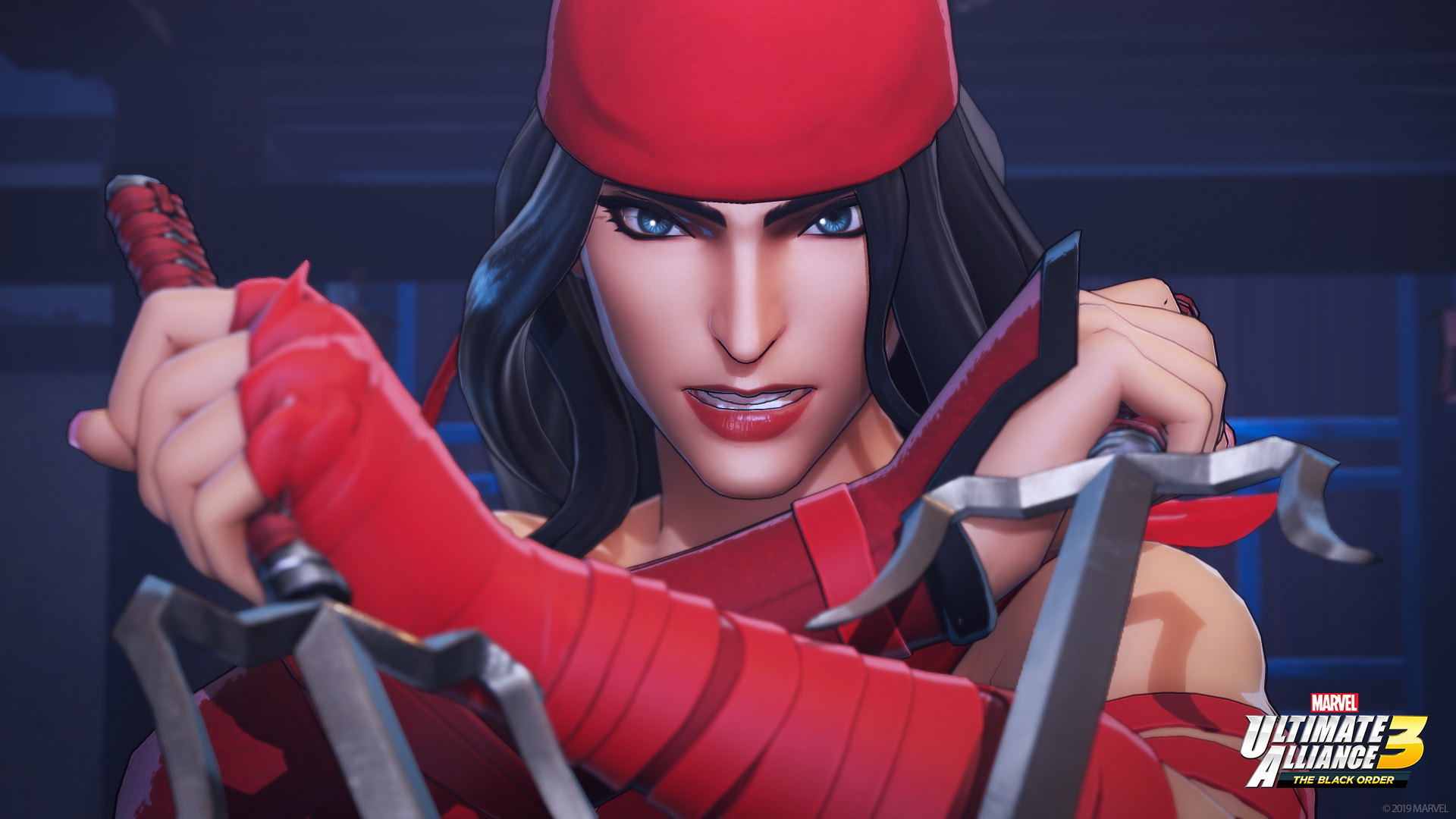 You can switch out heroes on a whim, but the most fun comes from finding the right combination for your four-person team. Doing so gives you access to damage amplifiers and can make taking on hordes of enemies a lot more fun. Even after many hours of gameplay, I’m still being pedantic with my squad - I’ve settled on Spider-Man, Spider-Gwen, Elsa Bloodstone, and Hawkeye, for now. The only real downside is the fact that your unused heroes will become underpowered and you will have to resort to boosting them with XP items.

The levels are fairly linear, with multiple arenas for minion and boss fights, but they’re immaculately styled. Each location feels like you’re transitioning through the pages of a comic book, and the fights that take place within them only serve to drive that point home. Pairing this with the way that the characters have been designed, there is a nice level of consistency that brings the visuals to the forefront. That being said, cinematics do well as a bridging point between chapters, but I never felt like the visuals were uninspired. Ultimate Alliance 3 does a good job of capturing the iconic design elements of every character, while not making one stand out more than the other.

The story doesn’t require your undivided attention, so you can easily play Ultimate Alliance 3 on the go.

The game feels like it was an ideal pick for the Switch. The story doesn’t require your undivided attention, so you can easily play Ultimate Alliance 3 on the go. The simple nature of the gameplay means that you can always spend a few hours doing a few challenges, or toying around with squad combinations. The biggest flaw came in the form of handheld mode. The screen was just too small to handle most of the action happening on the screen, and there were a few optimisation issues. On multiple occasions, I found the framerate dropping to almost unplayable levels. It’s probably for the best that you do boss fights in docked mode. 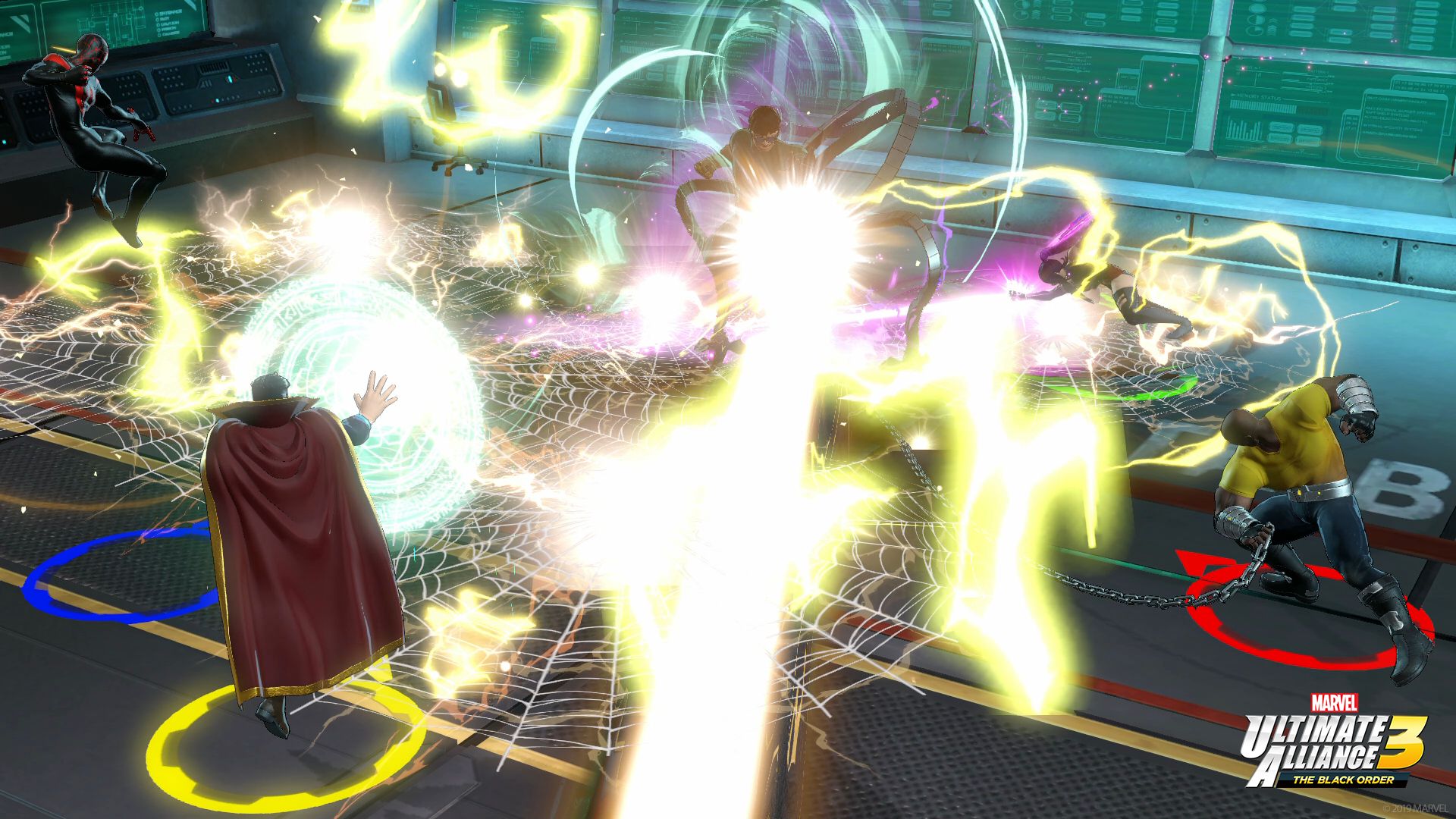 An issue that seemed to continuously rear its head was the horrible camera placement. There are sections of the game that force you to play through those areas with a fixed camera. The camera seemed to only hinder your gameplay, rather than help you. More often than not, enemies would disappear as a result of the camera trying to locate your heroes, and playing the game in co-op mode didn’t help either. I found myself enjoying the single-player mode more, as I had better control of the camera and the AI didn’t get in my way as often as I thought it would.

Marvel Ultimate Alliance 3: The Black Order doubles down on the formula that made the franchise so successful in the first place. It doesn’t try to win you over with a crazy story, nor does it reinvent the wheel, but it gives you a healthy serving of the Marvel roster and leaves the rest up to you. While battling hordes of enemies can get rather mind-numbing over time, Ultimate Alliance 3 does a great job with its diverse roster, action-packed gameplay, and its ability to pander to your inner six-year-old.

The fixed camera is annoying

Marko
I am thoroughly enjoying this ! 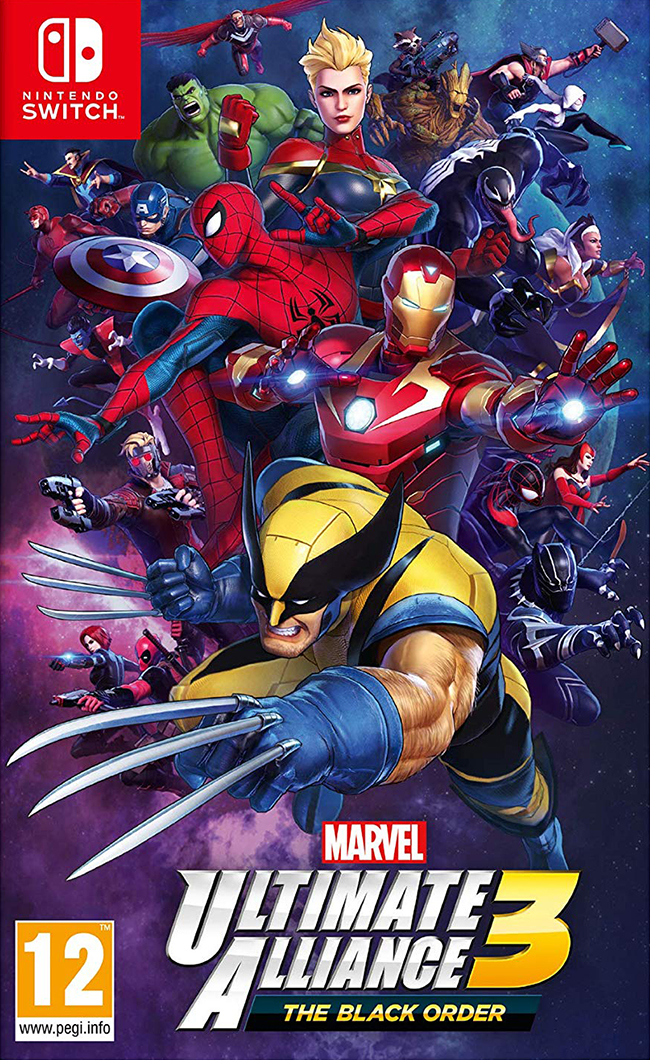