A hunter must hunt. 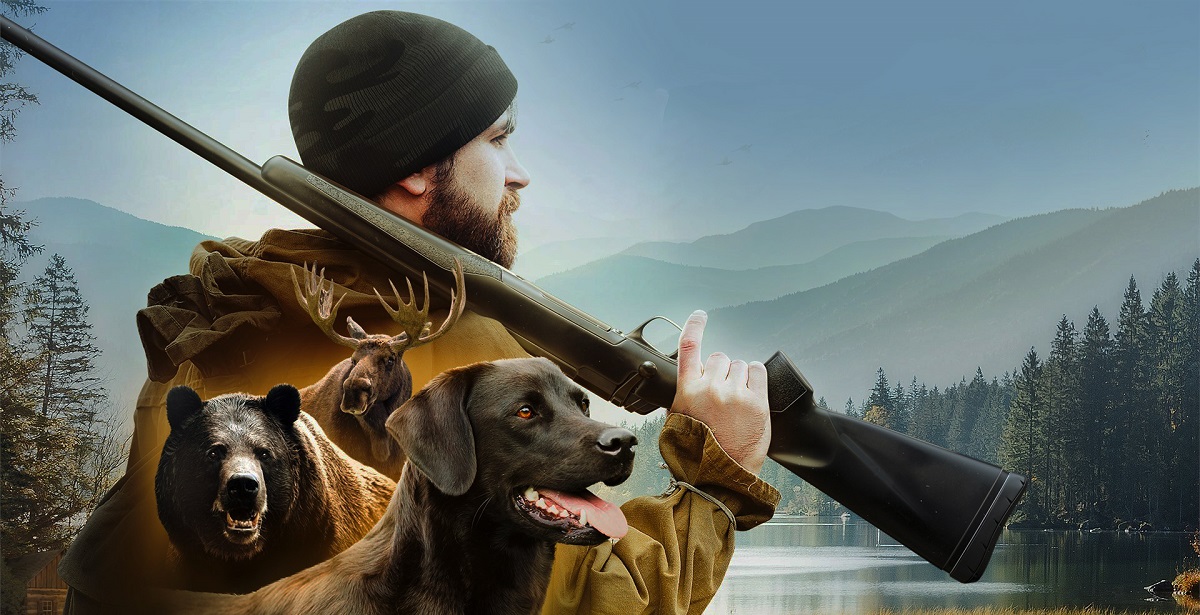 I'll be the first to admit, hunting games were always a blast of nostalgia for me. I fondly remember spending long weekends playing the Cabela's series on PlayStation 2, simply trying to understand the various mechanics and features at play that made these hunting experiences such a joy to play, despite some of their obvious flaws. Along came developer Neopica with Hunting Simulator 2, a more simulation-focused hunting experience than anything you might've encountered in the Cabela's games. For the most part, it's about what you'd expect, though can lack charm in certain areas. 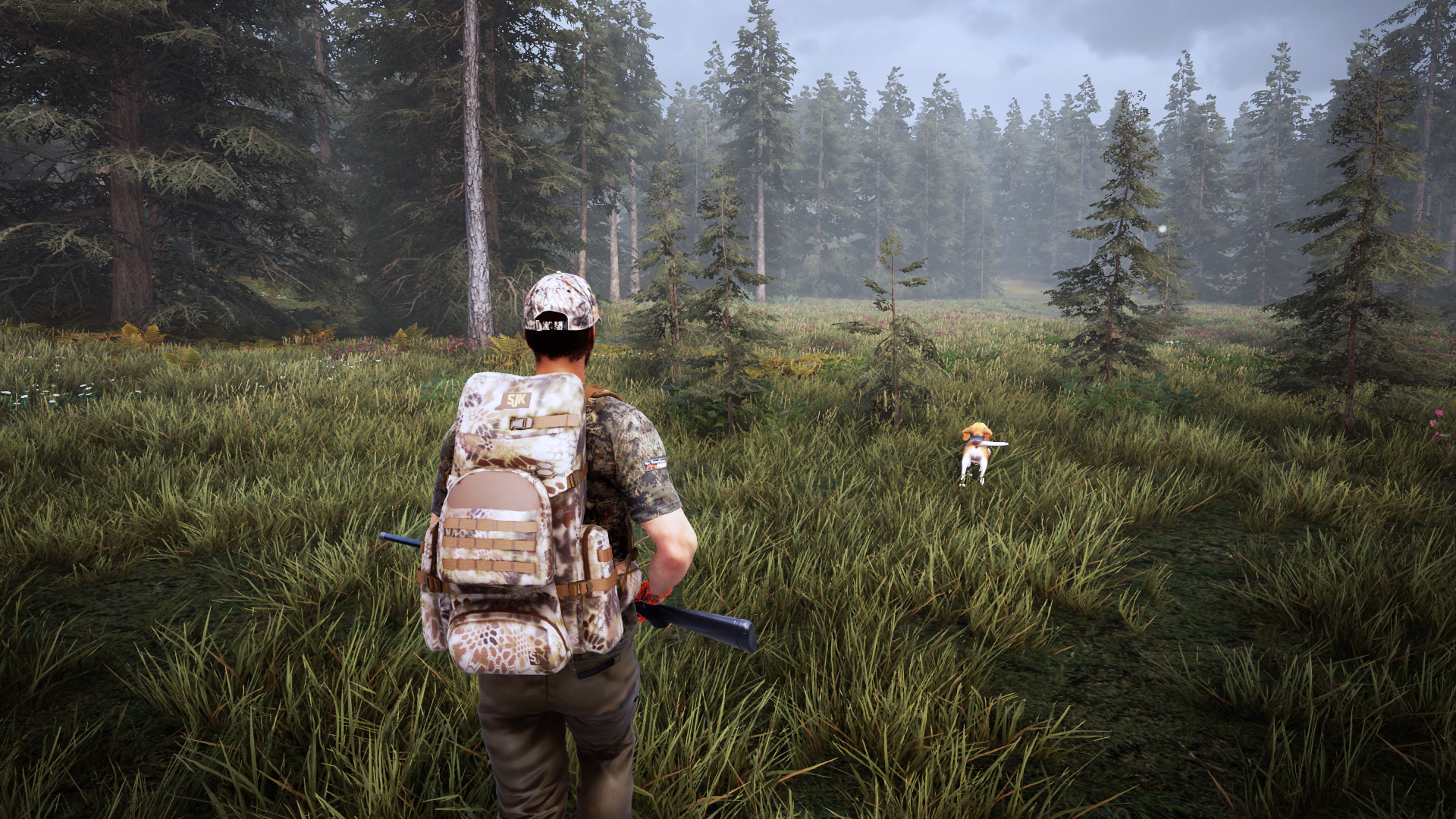 Hunting Simulator 2 starts off by introducing players to the vast world of hunting. You're given the option of choosing between a male or female hunter (a friend of mine jokingly exclaimed that the character models looked superior to those in Ubisoft games) and must go through a lengthy tutorial to come to grips with the gameplay loop. It's a fairly simple, if somewhat repetitive, loop of tracking down animals with the help of a trusty guide dog, choosing the right weapon to take them down, collecting their bodies and selling them for cash to buy your next few items, rinse and repeat.

Initially you start off with a bit of cash and only a few guns, one license, and some gear to customize your character with. However, as you progress, you begin to rack up more animals to sell so you can unlock better equipment, gear, and even entire breeds of dogs. This progression is what kept me going throughout the game, as Hunting Simulator 2 can certainly feel slow and tedious at the worst of times, and kind of calming at the best. 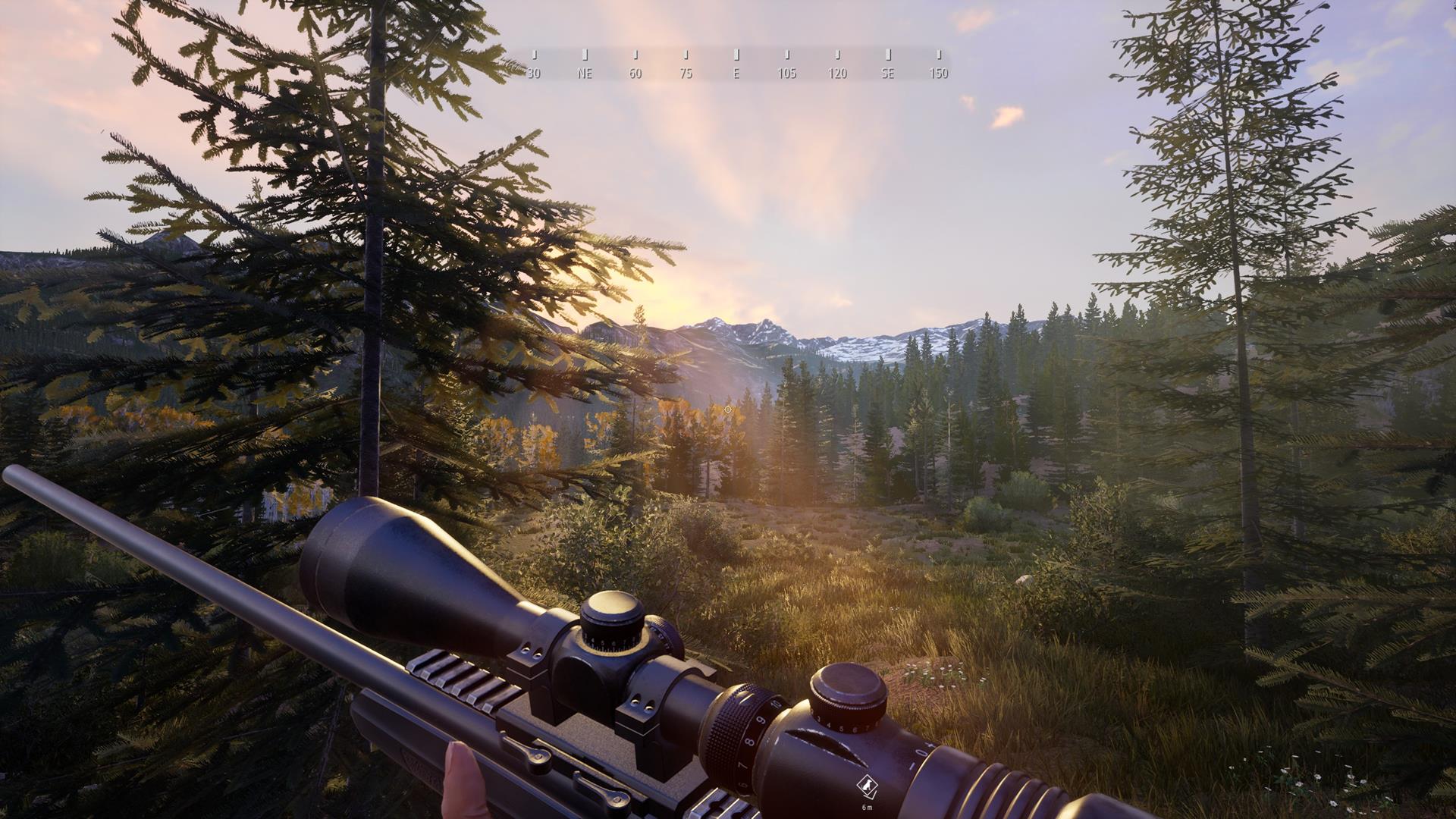 Hunting is the name of the game, and in order to hunt certain animals, you need to obtain hunting licenses for each animal. These will also expire after many uses, so you'll constantly have to keep purchasing the licenses. I didn't mind this at all, as midway through the game, I had accumulated enough cash to the point where buying old and new items was never an issue. If you have the right type of weapon to hunt your specific target with (of which there are many rifles), you're tasked with tracking down the animal and playing a waiting game for that perfect shot. The pace was kind of a mixed bag for me. Sometimes, it was quite therapeutic simply wandering the wilderness and soaking up the scenery. Other times, I just wanted the game to hurry along.

If you aren't patient and don't play by Hunting Simulator 2's pace and rules, you might find this quite a tedious and almost boring experience overall. What kept me constantly engaged were the environments all encompassing some pretty incredible natural beauty. Hunting Simulator 2 is a very good-looking game. The game allows players to hunt in six unique, semi-open world game reserves, each with different biomes like forests, mountains, open fields, and deserts. If felt relaxing simply trudging through the wilderness looking for the next target, but thanks to the exclusion of any music (with the game simply relying on organic sounds of crackling leaves, birds in the distance, and wind swaying the trees), you'll be immersed quite easily in the experience with a good pair of headphones. 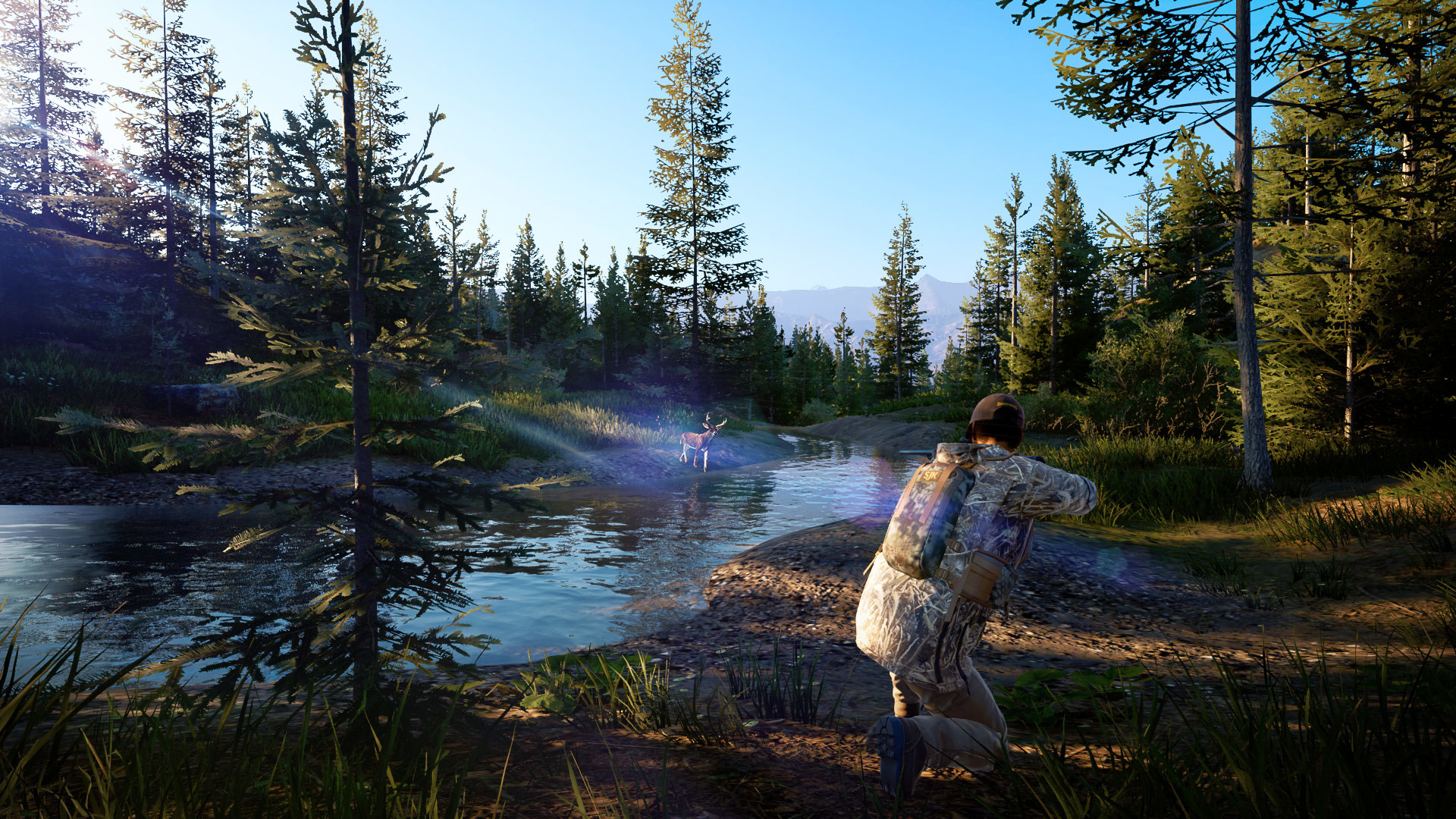 The customization was one of the driving forces behind my enjoyment in Hunting Simulator 2. While the choices of clothing, hats, boots, and weapons were fairly limited to begin with, it eventually opens up and you get a good variety of options to customize your character with. Furthermore, choosing the right weapon isn't just about looks either. Each rifle drastically affects how you tackle a hunt. The game does a good job of letting you know that you can't hunt specific animals with your current equipment, and need to take a trip back to the central hunting lodge to find the right gun. Generally, if the animal doesn't drop in the first few shots, you're probably using the wrong weapon.

Unfortunately, with no meaningful progression holding the game together, it does lose steam fairly quickly.

Hunting Simulator 2 also gets rid of any sort of mission or quest-driven narrative. Instead, there's practically zero objectives other than hunting animals, so there's no sense of progression besides acquiring better gear and equipment. Unfortunately, with no meaningful progression (either through narrative or some sort of mission-based structure) holding the game together, it does lose steam fairly quickly. On one hand, it's nice to take a break from the urgency of mainstream games having strict objectives, but on the other, meandering around the woods for hours can quickly tire you out.

Hunting Simulator 2 excels in one department that actually surprised me: the controls. The game's various weapons actually respond in quite a realistic way, featuring kick-backs with heavy recoil, a weightiness to the weapons (especially trying to take aim), and holding your breath to balance your shot. Unlike many first-person shooters, Hunting Simulator 2 goes for some incredible authenticity when it comes to making the player actually feel the weight and power of the equipment. The controls are responsive, heavy (in a good way), and fairly simple to get the hang of.

For all the good that Hunting Simulator 2 brings to the niche hunting genre of gaming, it's let down by a non-existent sense of meaningful progression and a repetitious gameplay loop that will only appease die-hard fans of the sport. The slow pacing is thankfully offset by some gorgeous and immersive scenery, decent customization options, and tight, responsive controls. If you're hoping for a thrilling ride of man versus nature, this isn't quite the action extravaganza you're looking for. It's a slow game that demands your patience, and that's where it can make or break a player's enjoyment.
6

No true sense of progression 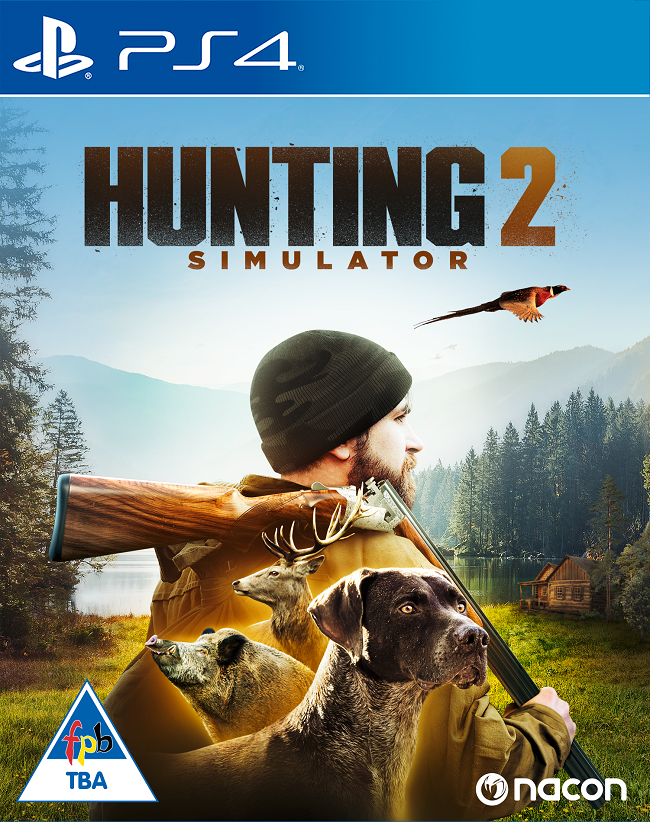