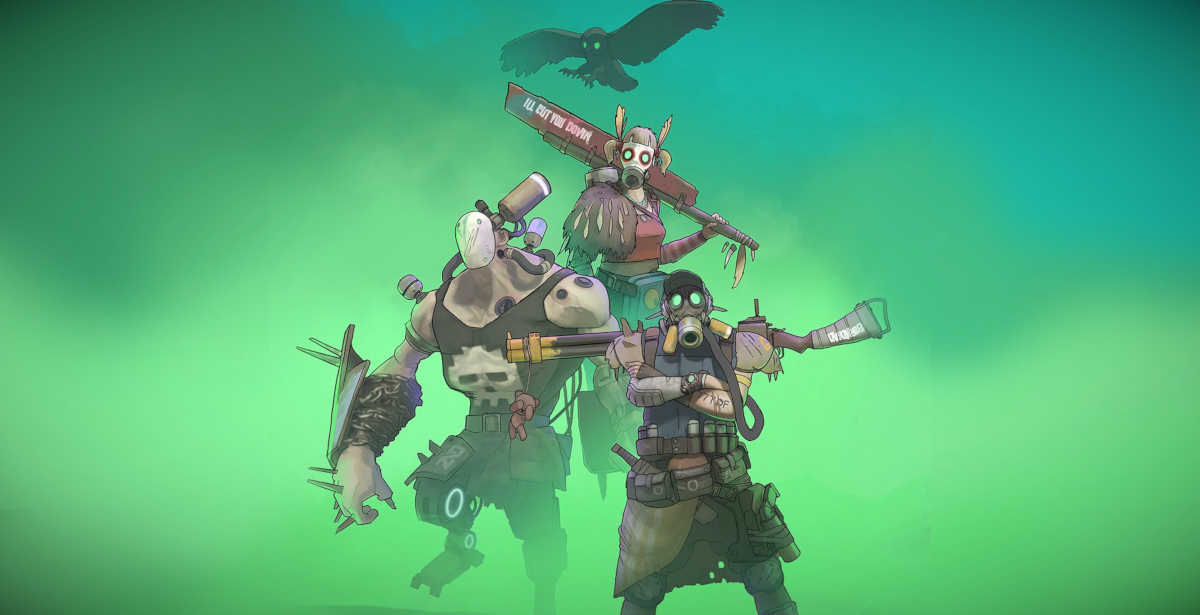 I’ve played few games that have such an appropriate title. “Dread” is exactly what I felt anytime I loaded up Dreadlands – partially because of the hostile, oppressive, and atmospheric setting, partially because of a gameplay loop that does its best to stifle any sense of progression. It took only a half-hour of playing to send me digging through my library and discover another Fatshark title with which it shares a lot of DNA – Krater: Shadows over Solside. Dreadlands is another Scandinavian, post-apocalyptic RPG, with an interesting setting, stylish artwork, and amazingly moody soundtrack; however, it too is let down by limited gameplay variety, bland mission design, and wonky difficulty.

Set in a world devastated by war and environmental cataclysms, you pick from one of three gangs that offer a different story arc through the “Dreadlands”, where survival revolves around the hunt for a mysterious substance known as “glow”. You’ve got the Scrappers, experts in junk tech and ranged weapons; the Tribe-Kin, nature worshippers with melee-focussed beasts; or the Skarbacks, modified by cybernetics and capable of both ranged and melee proficiency. It gives players an opportunity to pick a gang that matches their playstyle and encourage replays.

Despite the great premise and varied environments, the narrative only exists as flavour-text for a string of bland missions that, by virtue of the limited gameplay options, almost always involves going from place to place killing other gangs or mutated creatures (though sometimes, mercifully, you might only have to talk to an NPC or deliver an item without combat). 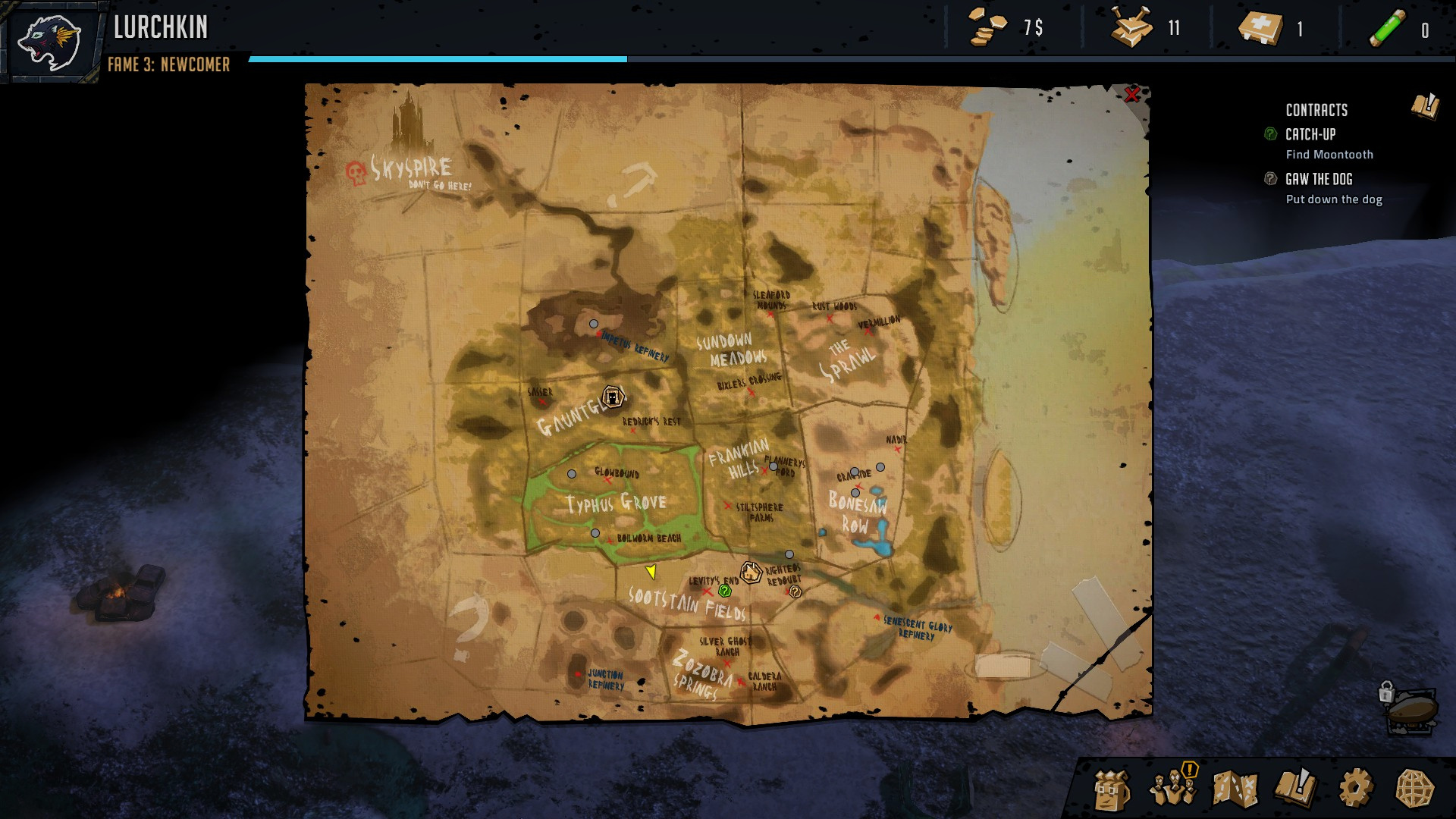 Dreadlands offers up a sizeable landmass to explore, with several illogically-stacked biomes, packed with their own towns, gang hideouts, and unique mutated creatures to keep you occupied.

As escalating combat encounters form the core gameplay loop in Dreadlands, you must juggle several systems that modify the turn-based combat experience. Your gang members level up, providing new combat or support skills. During combat, optional challenges will award bonus XP at the end of the round if they're completed. As your gang’s reputation increases – from completing primary and secondary quests – you unlock new dungeons to grind for scrap and “glow”, necessary for upgrading your hideout and respeccing skills.

Each reputation level also brings with it a choice of new “tactics cards” that you can play during combat – typically buffs for your team and debuffs for the enemy (you can add up to 8 in a deck, with 4 drawn during combat). You’ll also need to recruit new members from the barracks to up your gang size, craft or buy equipment for your team, and tackle quests in the local towns to boost your reputation (which unlocks new gear from their vendors). 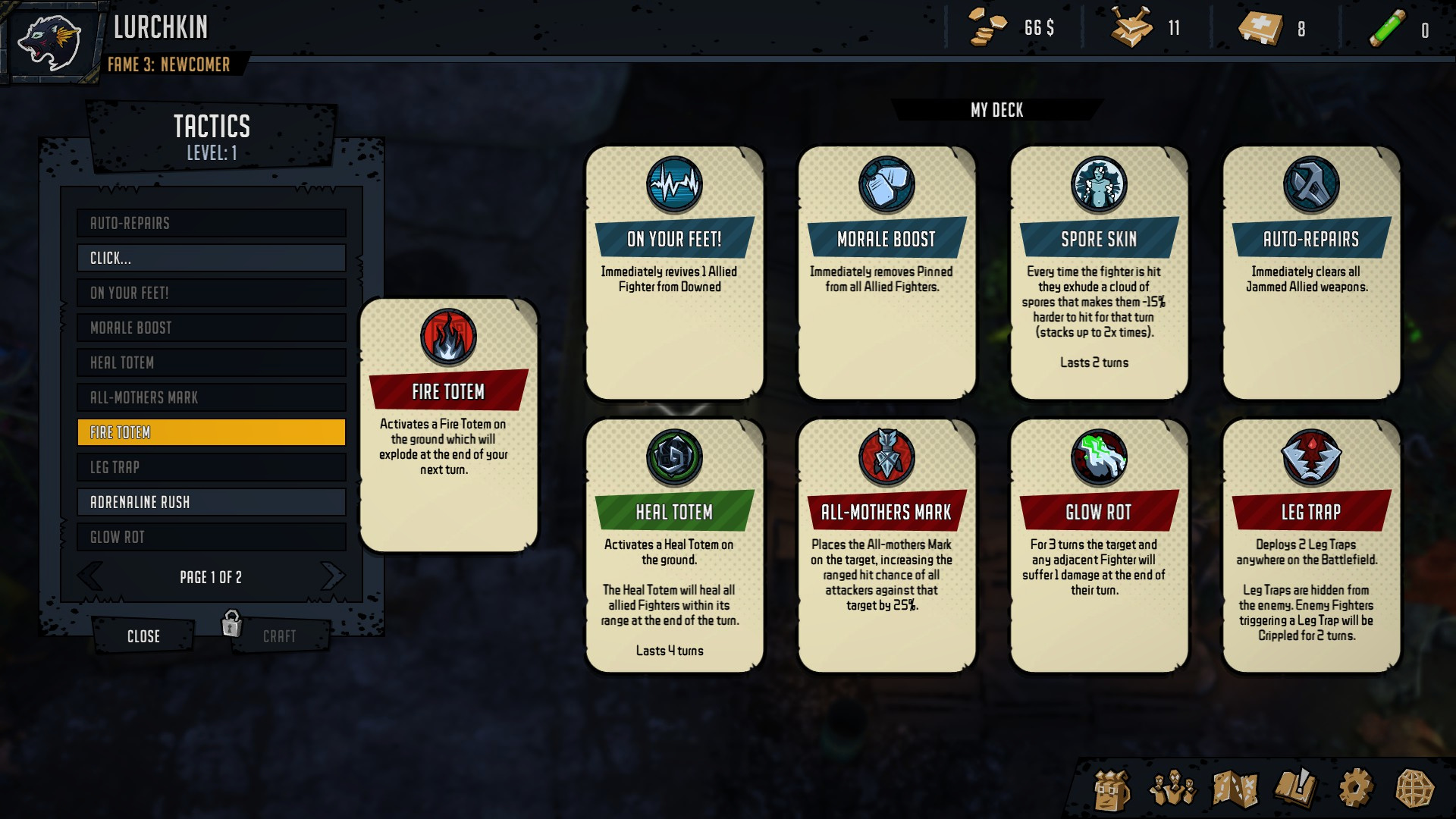 Four cards are drawn from a deck of 8 at the start of combat, but you can pick the ones you want to swap out for another random card. Cards can turn the tide of battle if used at the opportune moment, but be aware that the AI and other human players can do the same to you when you think you’re on top.

Once you’ve traversed the simple overworld map and entered a quest location, battle commences, and each team gets the chance to place their members strategically before the round starts. What follows is turn-based combat that follows the basic format established by X-COM decades ago: each gang member has two turns – before you use any tactics cards or skills – that can be used for any combination of actions (a double move, a melee rush, two consecutive shots, move to cover followed by overwatch, etc.). The percentage-chance-to-hit is also based on the classic variables: distance, character skills, abilities, and being in low- or high-cover.

In addition to the deck-building system, another novel gameplay mechanic in Dreadlands is the “morale” bar, which shifts based on the flow of battle. Missing your shot or having a gang member go down will shift it in the enemy’s favour. Conversely, landing flanked shots, critical hits, downing an enemy (or even better, executing a downed enemy) shifts it in your favour. At a certain point, morale breaks, and that comes with negative modifiers for the affected team. 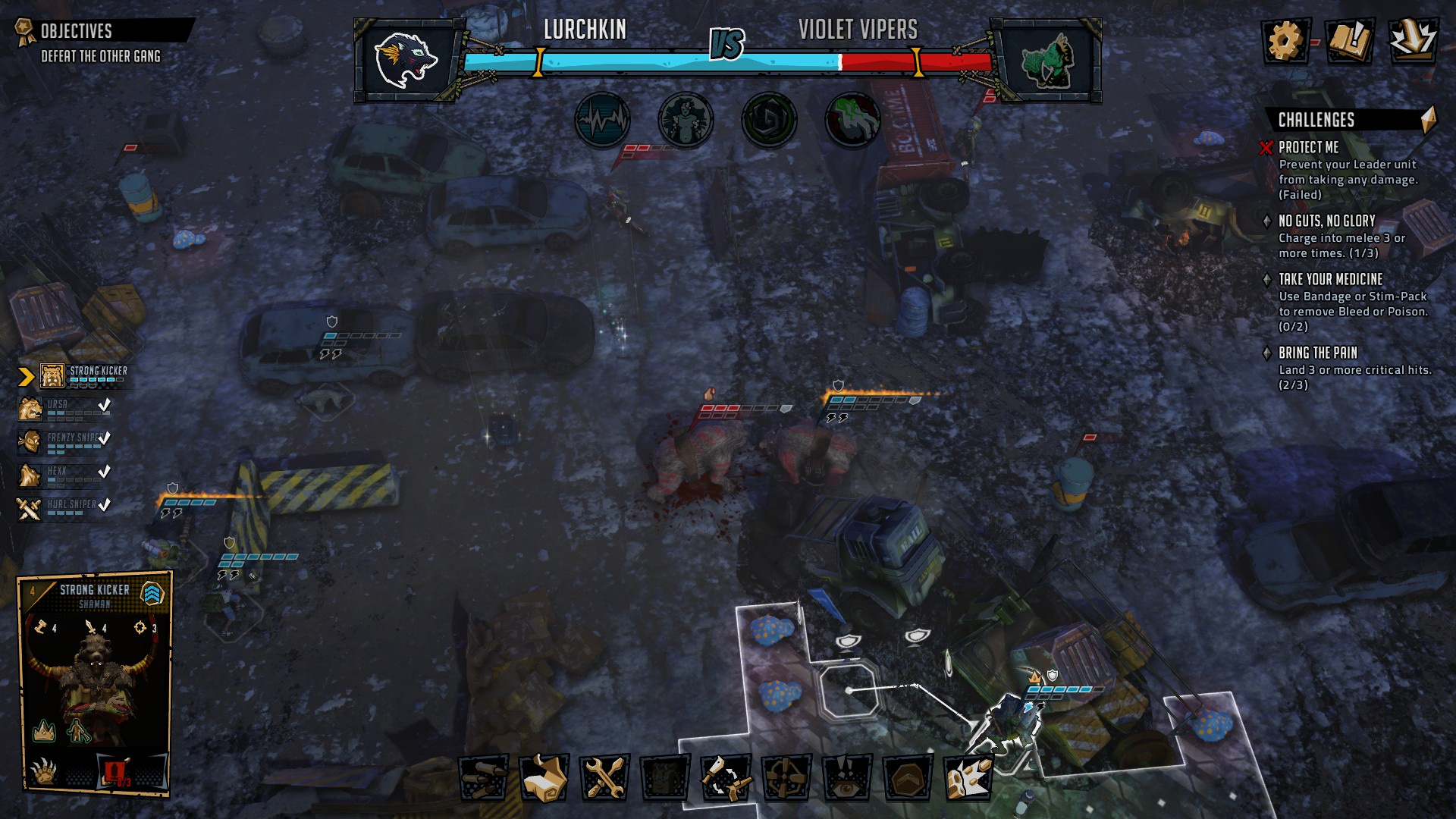 Downing and swiftly executing enemies can be a great way to shift morale in your favour, even if the numbers are still stacked against you.

On paper, these interconnected systems should make for engaging battles, and, viewed in isolation, they can be. I’ve experienced rounds that have gone down to the wire, with my last surviving gang member avoiding a lethal blow and felling the final attacker with a counter. However, these turn-based battles are 95% of the experience and the rest of the gameplay elements feel like underdeveloped padding. Once you factor in the inconsistent difficulty, enemy-favouring RNG, and miserly sense of progression, battling through a lengthy campaign and dealing with overworld encounters lose their appeal.

Dreadlands is a game in which the number of enemies is far more important than their individual level. Early on, I took a 5-member, level-3 Tribe-kin gang into an encounter against a dozen level-1 Scrappers, only to have them spam me with sub-50% hit-chance ranged attacks across the map – the bulk of which hit – pinning my melee characters (i.e. reducing their next turn to single action) and tearing apart my team before they could get close enough to land any hits of their own. Several hours later, despite running a geared-up, 6-man gang, this was still the case. Part of it might be the uninspired combat arenas – which can feel like a bunch of assets simply dropped on a map – but more often than not, it feels like your opponent’s 25% hit-chance is the same as your 75% hit-chance. 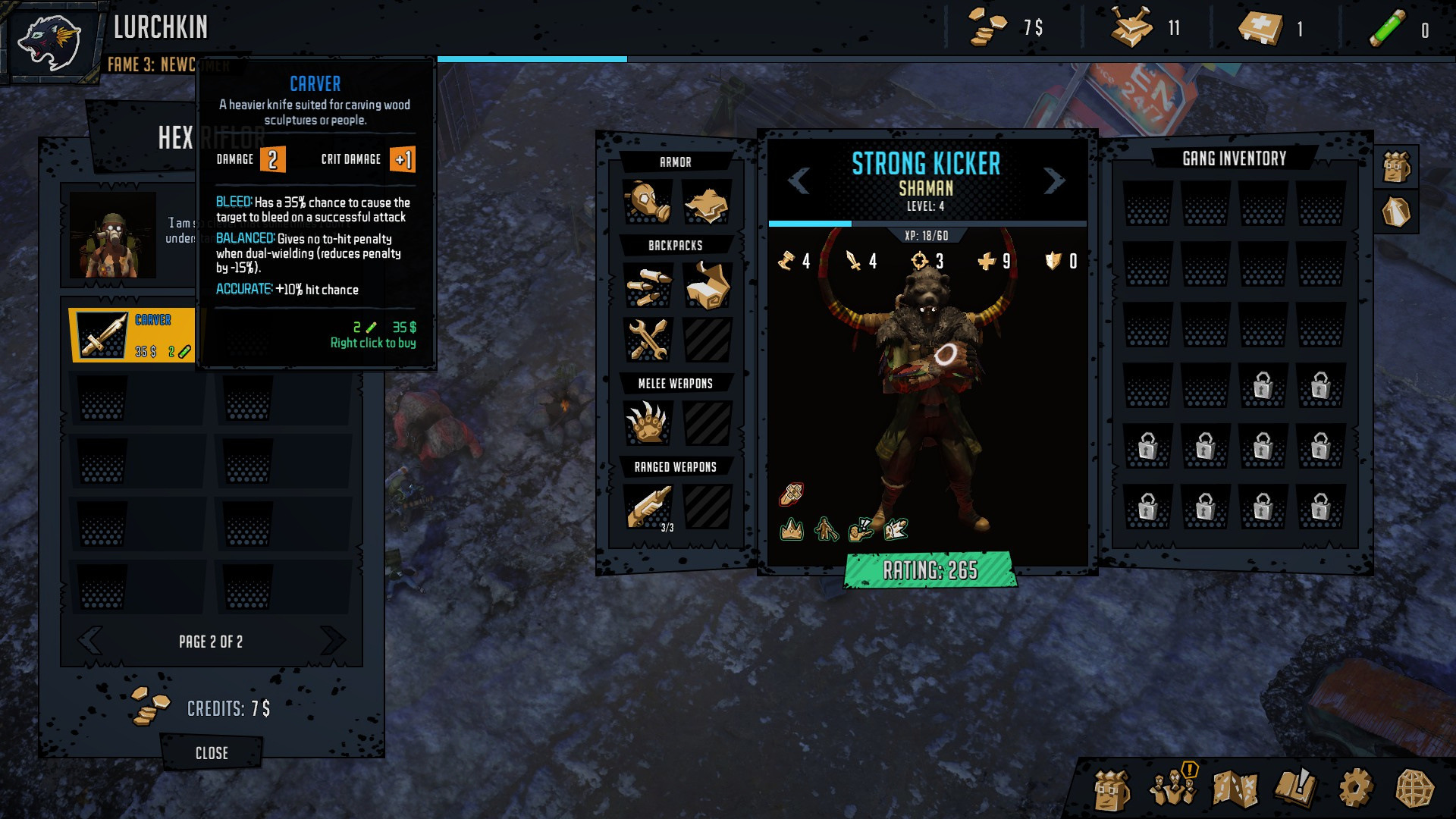 I can’t think of a game in recent memory that was so stingy when it comes to rewarding XP and credits. Many early quests give you 20-30 credits, and you might scavenge some junk that sells for 2-4 credits apiece. This is barely enough to buy a single piece of low-level armour, a basic firearm, or healing supplies. The cheapest (and most useless) recruit that can expand your gang starts at 70+ credits, with the most proficient costing a whopping 250+ credits.

You can mitigate these challenges by fielding a larger, well-equipped gang, but that involves dealing with my next major issue – the stifling sense of progression. Dreadlands doles out XP, credits, and gear at a pitiful rate, ensuring you’ll need to grind low-level encounters repeatedly to expand your roster and arsenal (and, now that I’m thinking about it, you need to grind medical supplies to simply heal injured gang member back at your hideout).

In a game that already lacks a strong narrative draw or gameplay hooks outside of combat, this drags down the pacing and makes every optional and random encounter feel like a chore – a potentially dangerous chore that’ll set you back with more injuries if your team loses (ambushes were a personal favourite). Most encounters feel more likely to cost you in resources and injuries, slowing your progress, even if you come out victorious. 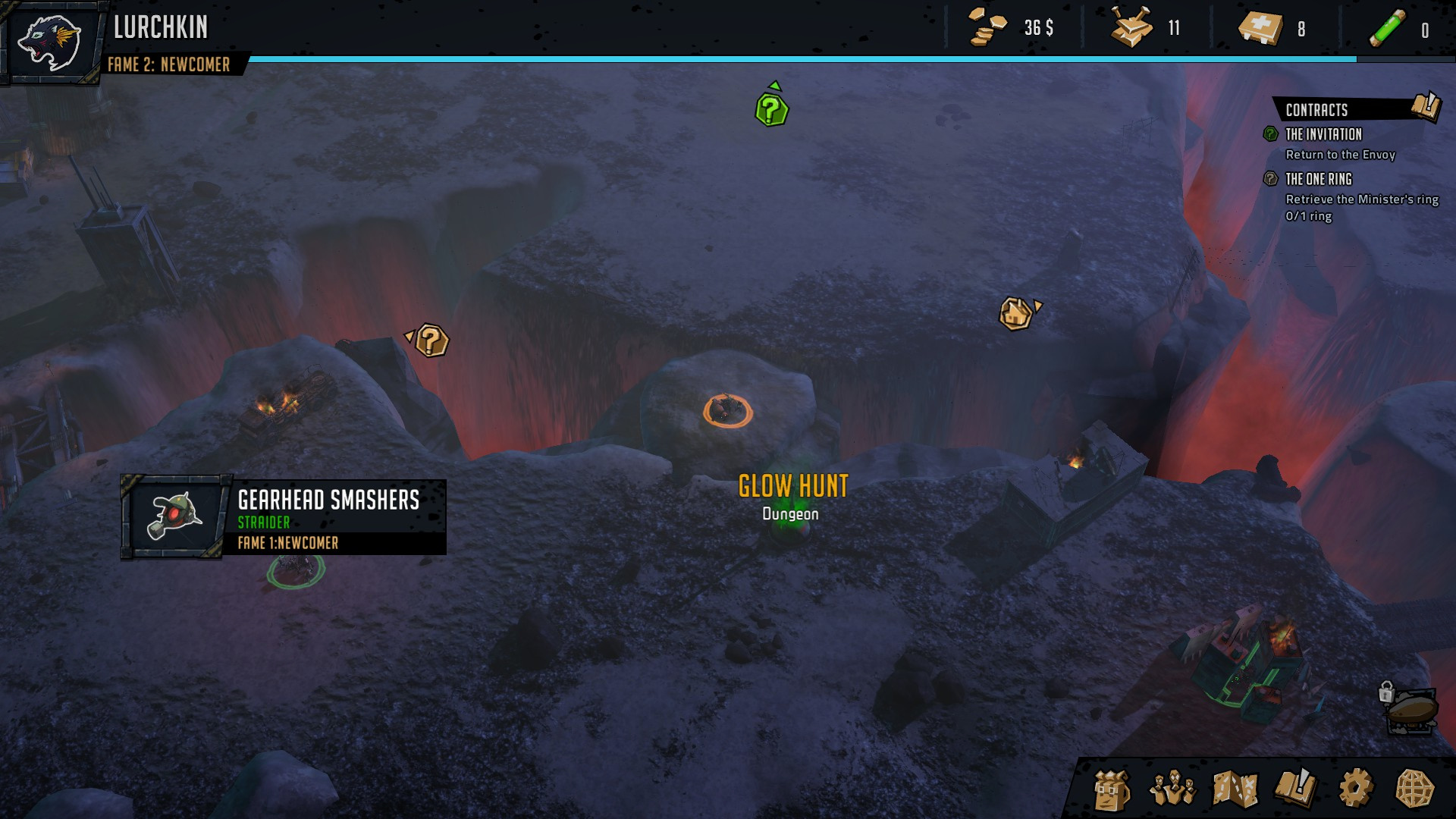 You can spot other players roaming the overworld from time to time, triggering either some cooperative PvE or PvP battles (which at least feel more balanced than the PvE missions, if you go up against a gang with a similar reputation level).

Going back to some positives, another way to offset encounter difficulty is to team up with a friend (or friendly random) to combine your gangs and tackle PvE missions cooperatively. Playing cooperatively has the advantage of both upping your numbers and bringing together gangs with different strengths, making encounters against numerous foes more balanced. The rare PvP rounds I engaged in were ultimately more satisfying than battles against the AI, thanks to balanced teams and RNG that favours neither side. You can assign an MVP award at the end of the battle – boosting a character's XP gain – allowing for some positive engagement despite the competitive format.

Another positive element is the presentation. It’s a budget game from a small team – so you need to temper your expectations – but the characters and environments are stylised and look great (aside from some grim, grey-brown regions); the writing is often entertaining (there’s no voice work); and the music is a fantastic mix of moody, synth-heavy, Swedish electronica. It all works to create a great atmosphere, drawing me back in to explore further, even if I dreaded another round of unbalanced combat. The experience was also mostly bug-free, with a rare crash loading me right back to where I was. That said, there were three occasions (over a dozen hours) when the game hung during the AI’s turn, forcing me to reload.

Overall, Dreadlands has potential but it’s a hard sell without some rebalancing to the combat and the progression system. If you’re after a tough, post-apocalyptic experience, with turn-based combat, and have a reliable coop companion for support, you’ll probably have a much better time than the solo player who’ll be hitting roadblock after roadblock. Much like Krater: Shadows over Solside, Dreadlands offers a distinctive and compelling world to battle through, but the core gameplay needs refinement.

Too much combat, too little everything else

Progression is a grind