All right, guys! Let's get Garmadon! 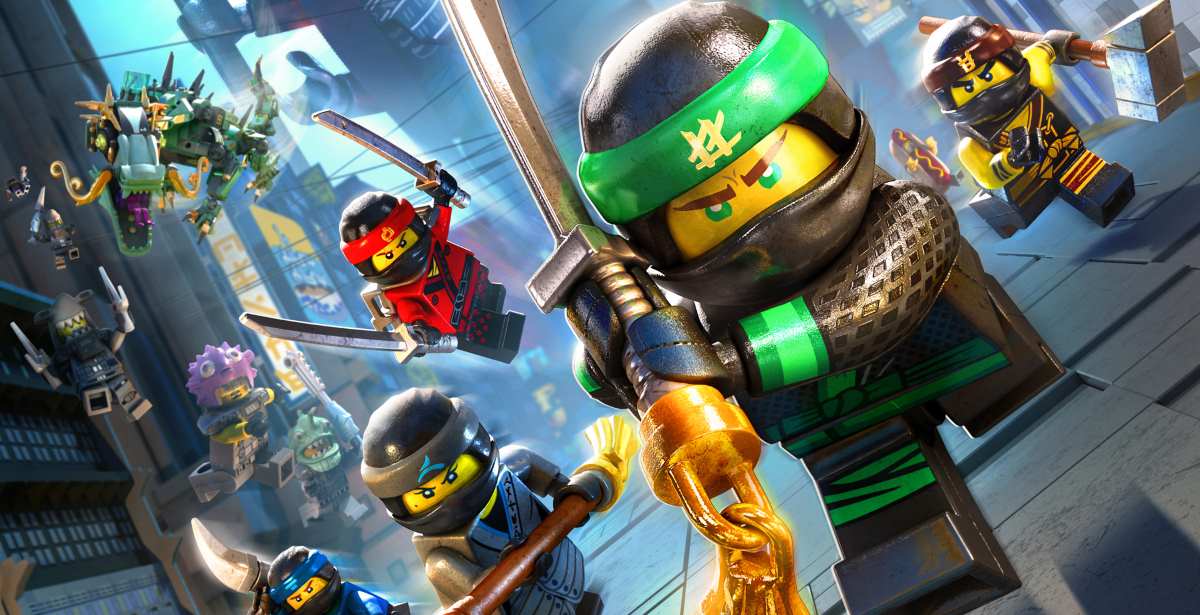 In recent years, the Lego series of games have taken a bit of a dive in the quality and fun quotient. Apart from the recent, and amazing Lego Dimensions and the Minecraft inspired Lego Worlds, the series seems to have reached a plateau in terms of level design and entertainment. In short, they’ve become 'samey' and the changes between controlled characters and environments is really all that has differentiated the titles from one another. Sadly, the fun times have become somewhat generic. 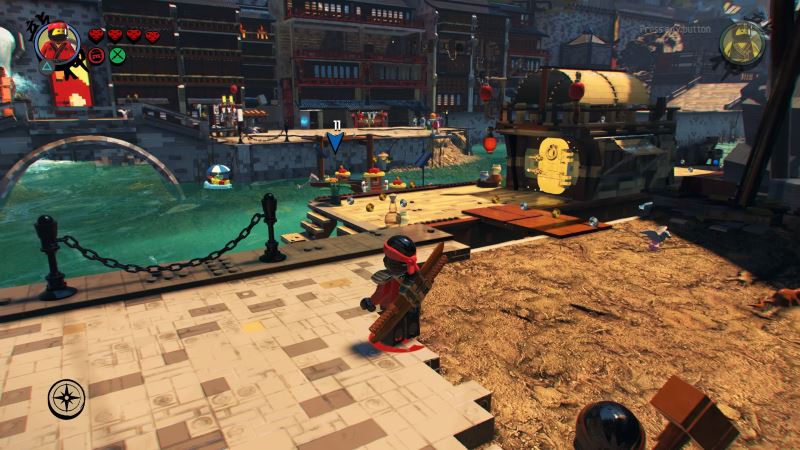 The Lego Ninjago Movie Videogame (phew, what a mouthful), retains the tried and tested Lego game design but throws in just enough quality of life and combat changes, along with a nice sense of renewed vigour and humour to make it an enjoyably fun, though technically flawed, experience that reminded me why I love playing these games in the first place.

As the title implies, this is the videogame adaptation of the latest Lego movie based on the Lego Ninjago IP. You take on the role of the famous ninja-themed characters who protect Ninjago City from the forces of darkness intent on destroying it. This time it’s the evil Garmadon whose attack on the city, and a failed attempt by the Ninja’s to stop him, forces the characters to travel across Ninjago Island in search of the Ultimate Ultimate Weapon while gaining greater Ninja spiritual power, and just maybe healing some family rifts along the way.

The story follows the formula setup by the Lego Movie by mixing great comedy and action with a heartfelt message. If you haven’t seen the movie yet and are intent on picking up the game, then you will be in line for spoilers as the game makes use of movie footage for cutscenes. Strangely, the game chooses to re-record the movies dialogue with different voice actors which meant missing out on being trained in the way of the Ninja by Jackie Chan, who voices Master Wu in the movie. For a licensed title, it’s pretty strange. The game did have a small budget and development window, which may have had something to do with it but it is a loss. 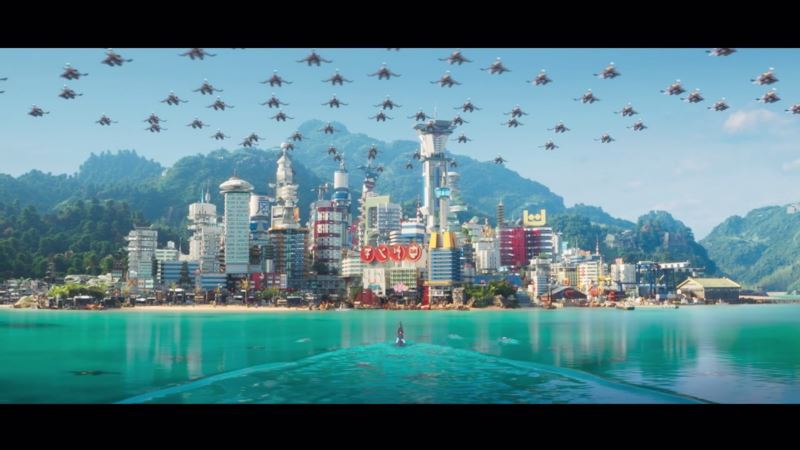 Thankfully the humour from the movie, and from being based on a Lego property rather than a licensed tie-in, has carried across and is one of the stronger aspects of the game. Whether it’s listening to the Ninjas banter among themselves, listening to henchmen attempt to hijack a chicken cart while making bacon jokes, or just finding a Lego character taking a bath with a chicken in a pot while exploring easily missed nooks and crannies, the humour is back on form.

From the game's 70’s inspired martial arts opening replete with era-specific film grain to the training sequence that has you fighting a martial arts chicken to take back your Dojo, Ninjago had me smiling frequently.

The freshest breath of air that kicks life back into the Lego videogame series comes from the gameplay itself.

Ninjago is a linear, level-set gaming experience. There is no hub world this time, but rather levels that have a set path through them until you complete them. Once the level is complete it opens up for freeplay and becomes a mini-hub on its own. Each area has collectibles to find in the form of Gold Bricks and Lucky Packets that unlock new characters to play with, and secret areas that can only be opened with a certain amount of Gold Bricks in your possession. Simple quests are available to earn more Gold Bricks and there is a multiplayer battle arena per level. Special Dojos are unlocked in which you fight various boss enemies and waves of bad guys while occasionally dealing with environmental hazards. 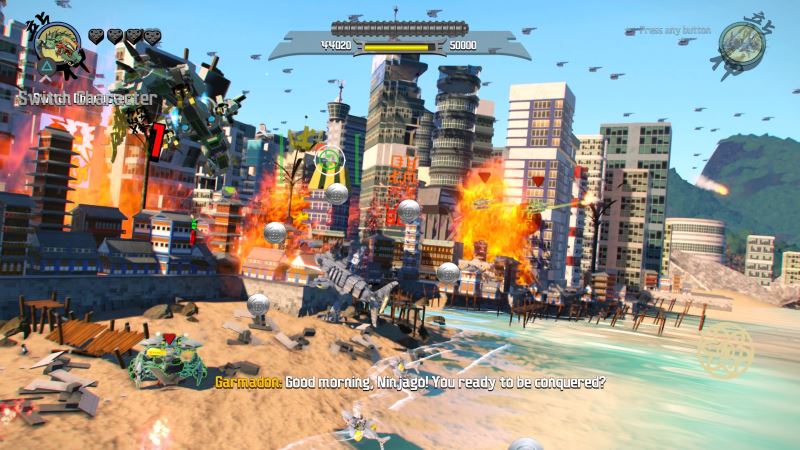 The use of studs has changed as well. Previously studs would be used to purchase characters but that is no longer the case. Gone is the “Treasure Hunter” goal that permeated previous games that you would get for collecting a certain amount of studs per level. In its place is a multi-level bar that levels up as you collect a certain amount of studs, unlocking a gold brick and character parts for each milestone achieved. It’s simpler and removes the desperate need to collect as many studs as you can per level, especially from defeated enemies, before they disappear. Studs do stick around longer before disappearing, making it less frustrating when you’re still wading through a group of enemies to get to them before they vanish into the ether.

Multi-builds make a return appearance, adding some depth to the game's simplistic building puzzles. Instead of creating just an engine to power a firetruck to put out a fire, you’d first need those parts to build a pump to fill up the firetruck's tanks, for instance.

The combat in Lego games has never been overly complex. In fact it’s been rather simplistic with basic punches, kicks, and weapon usage. While death has never been a factor in the gameplay as the only real penalty for dying was losing studs, it was annoying at how easily you could die during enemy waves and mostly from projectile attacks. 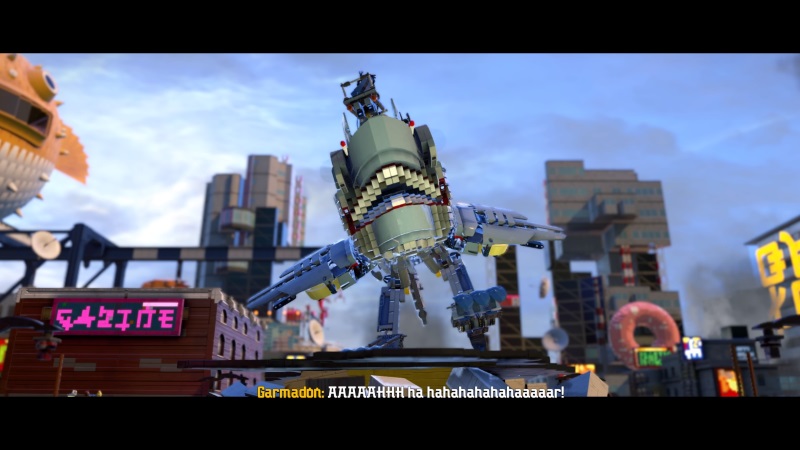 Ninjago revamps the combat system completely, into a combo based system that puts the power into the player’s hands and makes you feel like an unstoppable, bad-ass ninja. Combat is based around combo styles with names like Swooping Hawk, Rushing Boar and Floating Butterfly. You could easily spam attacks to tear through the game's henchman but they regularly block your attacks forcing you to change up what you’re doing to get past their guards or to build up your combo meter enough to initiate an awesome sky-juggle combo that wouldn’t look out of place in Naruto. Coupled with the new and irreplaceable Dodge Roll, you’ll be tearing through enemies like a lightsabre through butter in no time.

While the system won’t be challenging DmC’s anytime soon, it’s a hugely enjoyable and viscerally cathartic experience that is the way forward for the series. Lego Ninjas are OP and I loved the hell out of that!

A simplified skill tree accompanies each style. You’ll earn 'Ninjanuity' tokens that can be used to purchase new skills in the tree which range from double the amount of studs gained when using a specific combo to longer air juggles and dashing ranges. Later you’ll acquire each characters Spinjutzu technique that opens new areas for you in the game. Ancient Scrolls hidden throughout the levels provide you with further buffs that make Ninjago one of the most generous Lego games in some time.

As much as I loved the game there are some technical issues that are keeping me from giving it a higher score.

During my early playtime I experienced a significant amount of screentear, slowdown, crashes and freezes that had me scratching my head. The autosave feature is handy but I found myself having to replay a fair amount if the game crashed between checkpoints. A 4.3gb patch is available that seems to have fixed the crashing issue as I didn’t experience it again. It also seems to have fixed the bulk of the painful screen-tear but it still rears its head occasionally. Slowdown, unfortunately is still prevalent and is one of the more annoying issues as it happens during periods in which there isn’t much happening at all on-screen. The game seems to run just fine when dealing with all the exploding enemies and gushers of studs, but around a corner into a quiet street or move the camera to look at something and it chugs along for no apparent reason whatsoever.

Despite a fairy short playtime, compared to other Lego games, Ninjago is the most fun I’ve had with a Lego game since Lego Dimensions came out.

Changes to some core mechanics removes the chore.

A little on the short side. 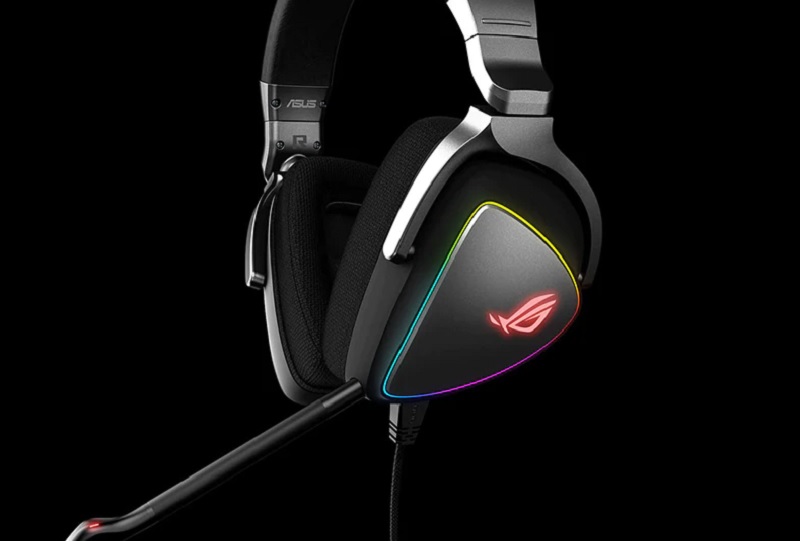 The ASUS ROG Delta line has become synonymous with the build quality, striking designs, and value for... 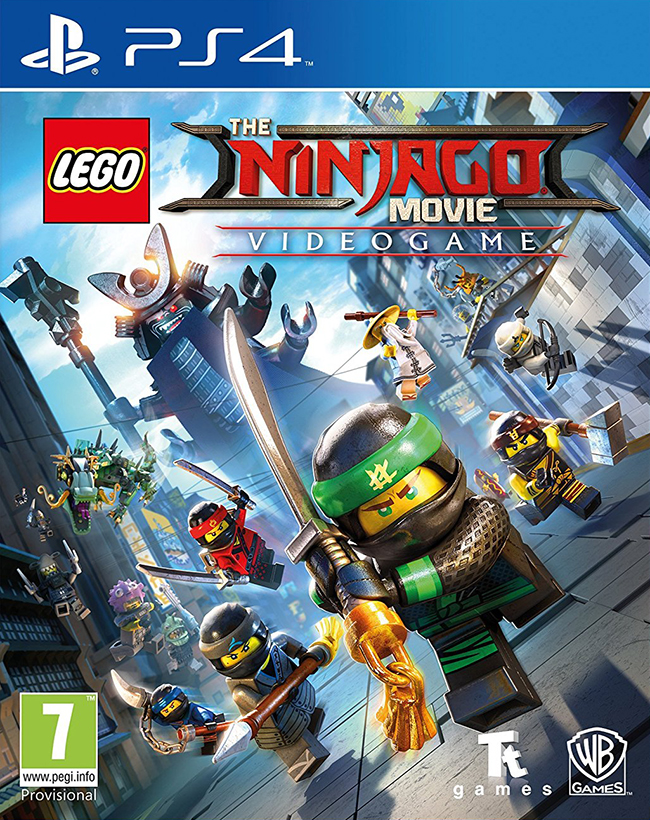