Hell of a port. 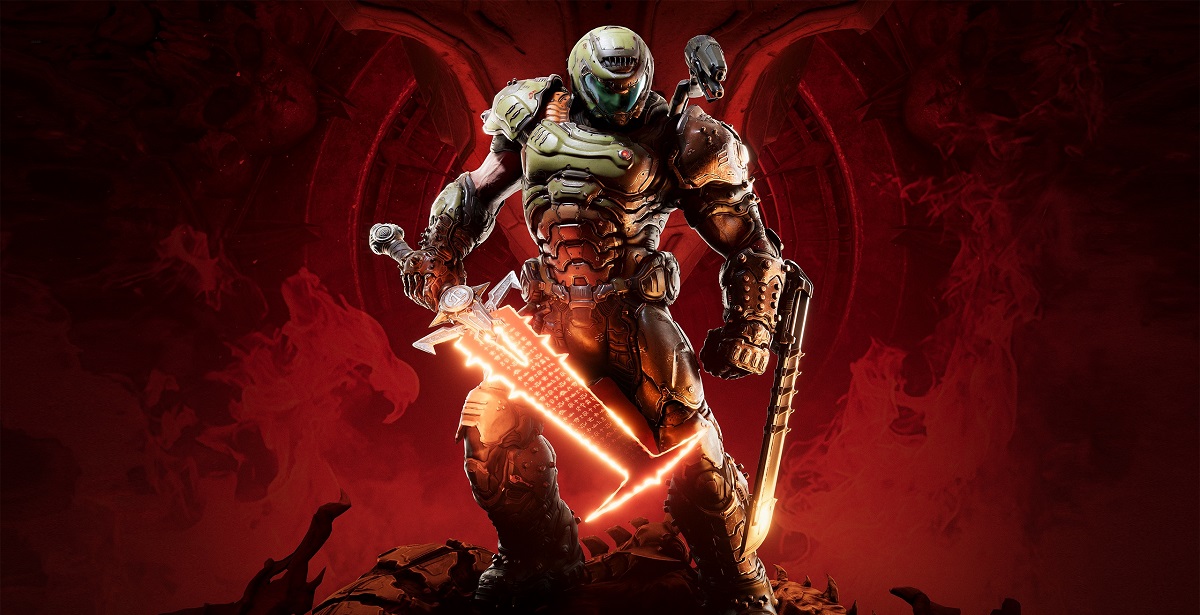 The highly anticipated sequel to the rebooted DOOM, DOOM Eternal has made its way to the Nintendo Switch at long last. A few years back, the idea of running a game like DOOM on a Nintendo handheld would land you straight into the looney bin. But here we are, not only witness to the rebooted DOOM on the Switch, but it’s faster-paced gory demon-slaying sequel. Despite having to make a few sacrifices to run on the downsized hardware, the ports were nowhere near as bad as expected. 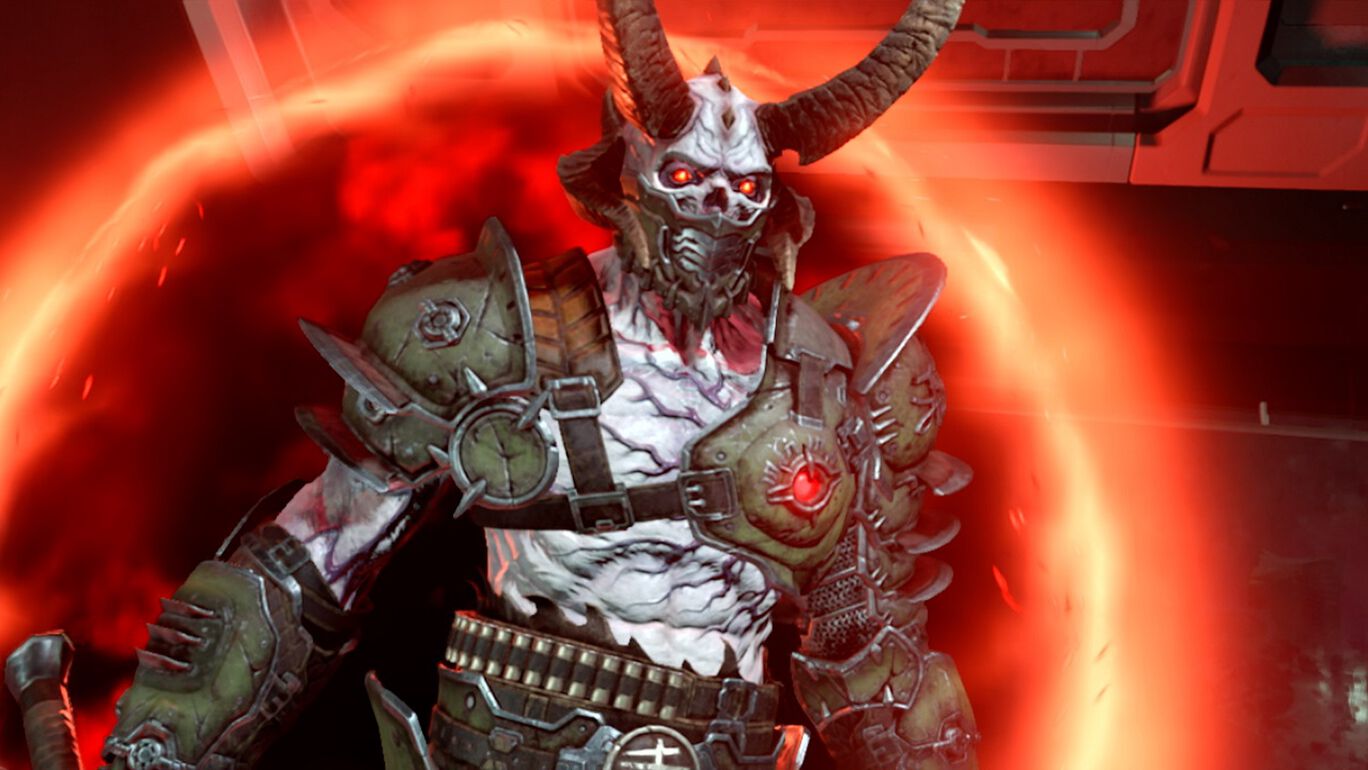 That being said, DOOM Eternal on the Nintendo Switch has a lot to live up to. DOOM Eternal initially launched on the PS4, Xbox One, and PC which raised the bar for a first-person-shooter in almost every regard. Not only did it provide a tantalising challenge, but it is one of the most engaging FPS games of its time. Well, after coming from its high fidelity platforms, DOOM Eternal on Switch is still surprisingly good.

The base game on which the port is based on is phenomenal, to begin with, so it shouldn’t be too much of a surprise that the masterpiece of violence and destruction translated so well on the Switch port. For those who aren’t familiar with DOOM Eternal, the story acts as some kind of soft-reboot (alongside its 2016 predecessor) for the franchise, starting with the DOOM Slayer hunting for a demonic priest on Mars as what is left of Earth burns in the fires of hell. While there’s still something left to save, it is up to the DOOM Slayer to return to Earth and yet again, become the symbol of violence and destruction. 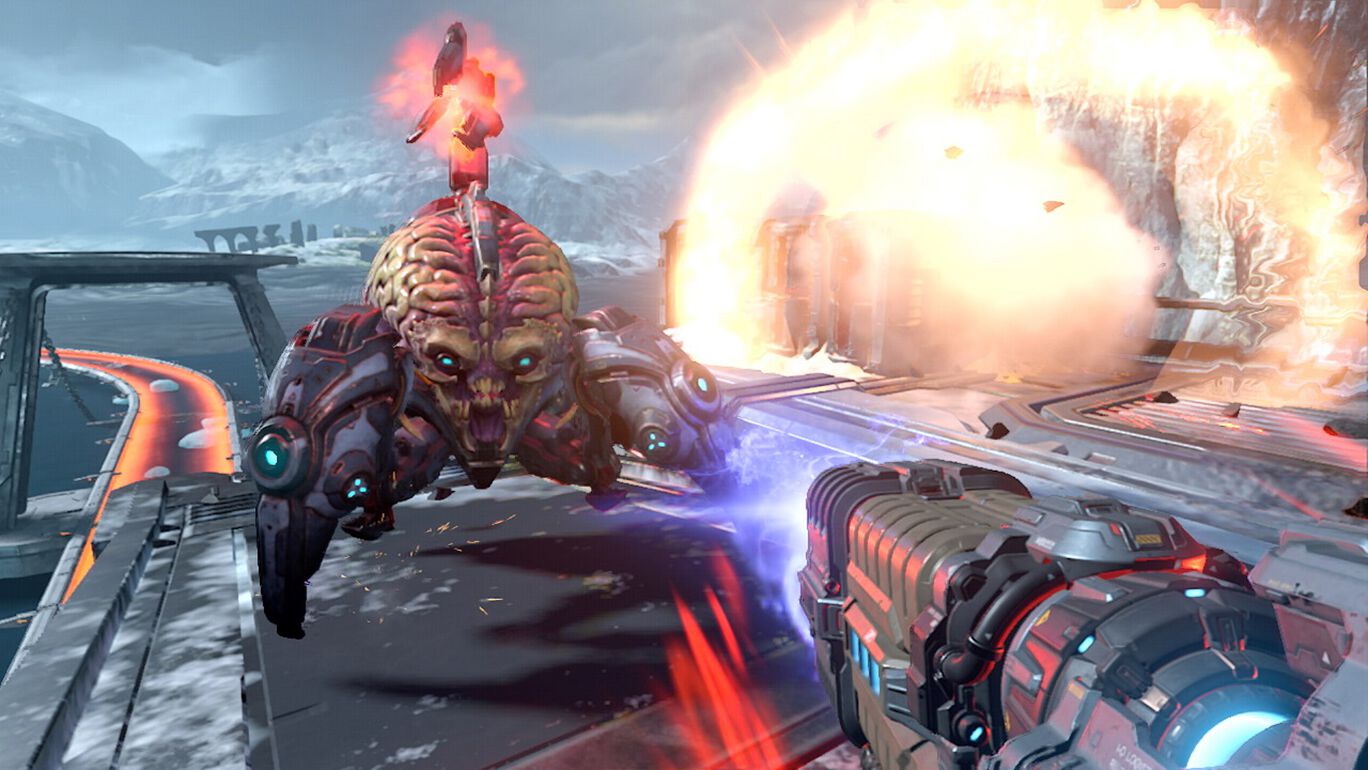 The game runs at a respectable 30 frames per second and everything from the textures to the draw distance has been dialled back to make sure the game runs smoothly throughout. The only times I’ve noticed any drops were during cutscenes, but thankfully, those were very far and few between.

DOOM Eternal on the Switch is an absolute blast to play, with the handheld mode being the standout way of playing the game.

I would be lying if I said you wouldn’t notice the difference right away. Everything looks a little rougher around the edges, with duller tones, and you’ll notice how much slower it runs. But none of that matters once the massacre begins. DOOM Eternal on the Switch is an absolute blast to play, with the handheld mode being the standout way of playing the game. I would, however, recommend that you invest in a Pro Controller or something more FPS-friendly, as the joy-cons never really felt like they work with you while playing the game. I often found myself fumbling about in more intense areas. That being said, this is more the hardware’s fault, rather than the game itself. The analogue sticks on the default joy-cons just aren’t up for the job and can make the experience feel very clunky at times. Some may not have a problem with this at all, but higher difficulty levels require a level of precision that I feel the joy-cons simply cannot offer. 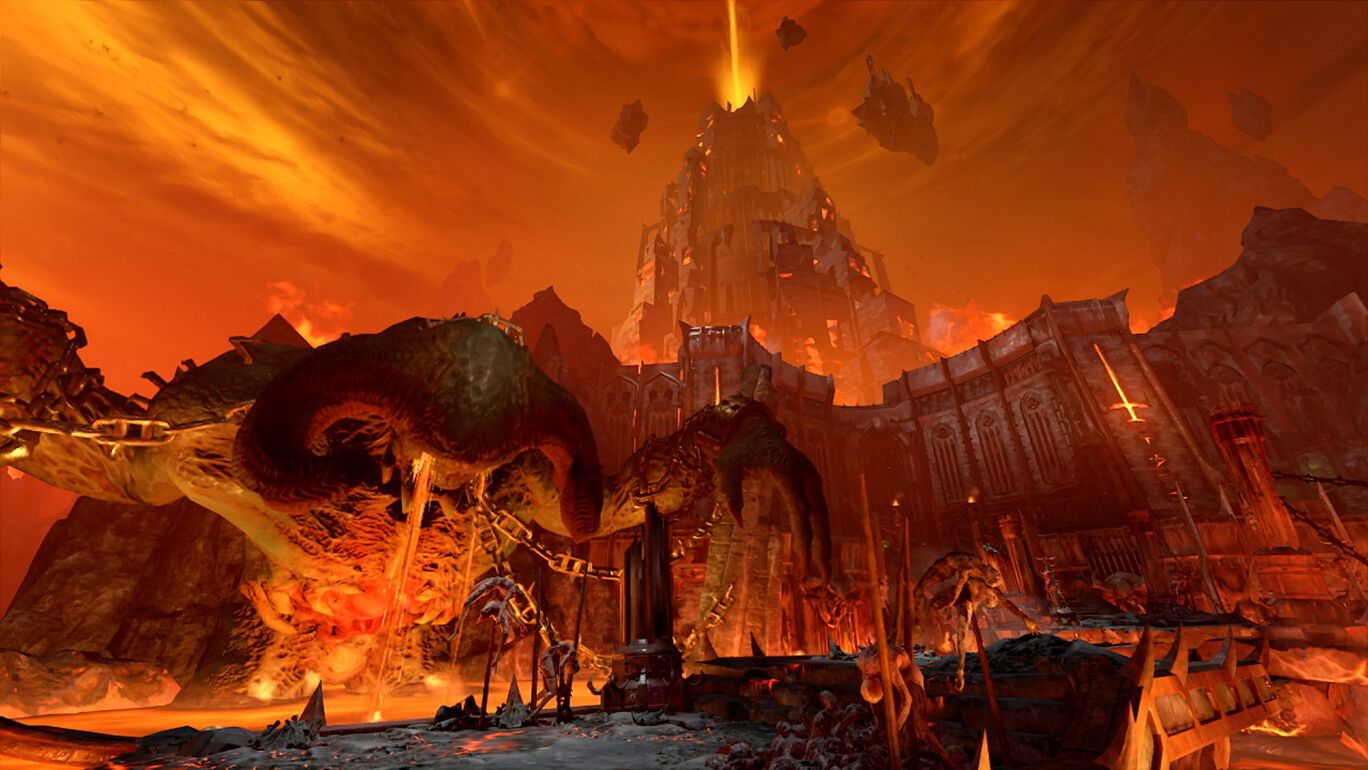 Playing DOOM Eternal in its docked mode is where you will really start to notice the graphical downgrades. The dull tones and hit in visual fidelity I mentioned earlier really start to make themselves apparent. This isn’t at all where DOOM Eternal on the Switch shines, but it is worth noting that the game is still playable. Thankfully, this isn’t the only way to play the game and I immediately retreated back to the handheld mode, where DOOM Eternal just becomes a gift that keeps on giving.

...higher difficulty levels require a level of precision that I feel the joy-cons simply cannot offer.

It doesn’t take long to fall into the rhythm of the game. Need health? Perform a Glory Kill on flashing enemies. Need Armour? Just roast the demons with your flamethrower. Need ammo? Simply cut demons in half with a chainsaw. Pair this with the amazing traversal moves like wall-climbing and swinging, and you will find yourself exploring each level with great detail, destroying anything that happens to be in your path. As a package, this game is phenomenal. The boss fights still left me longing for more, but at this point, I’m just nitpicking. 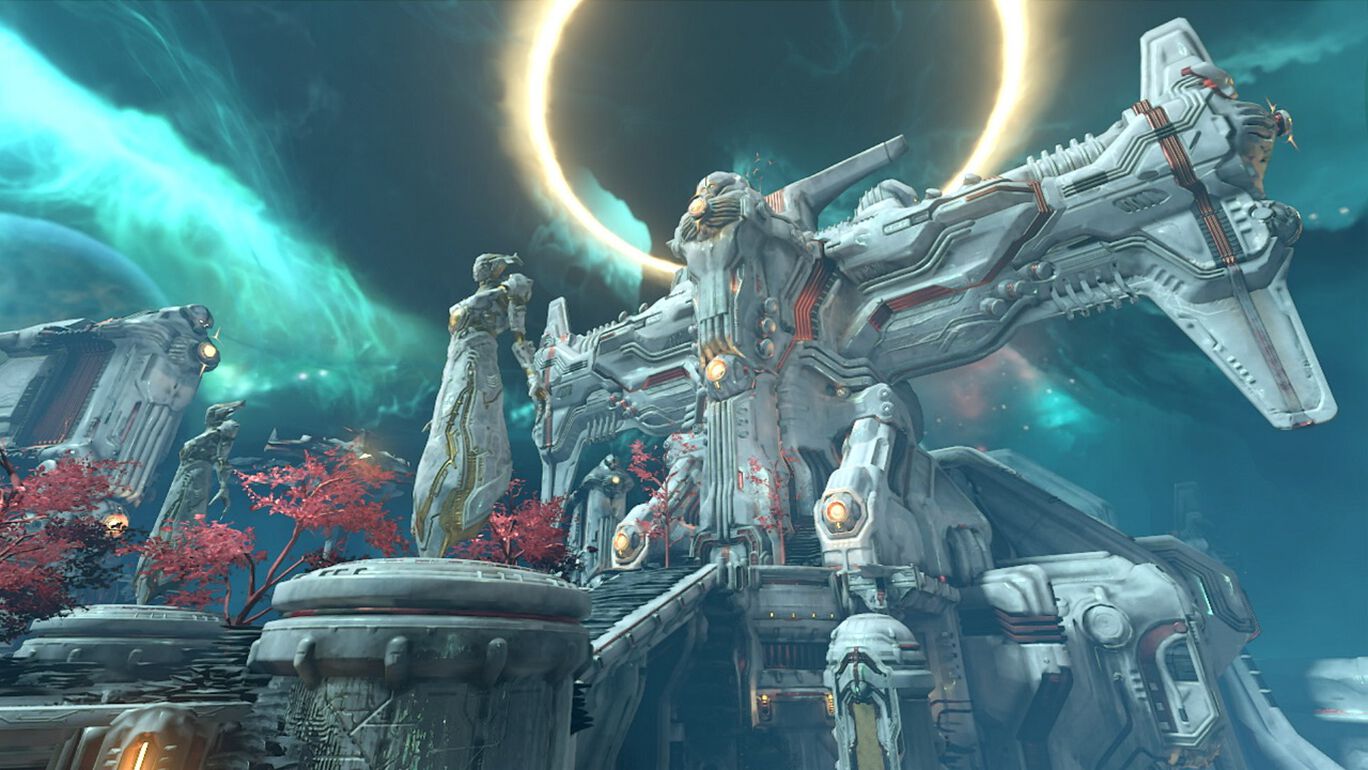 In terms of battery life, I was able to play the game for around 4-5 hours at a time before having to reach for a cable. Your usage may differ significantly, but the Switch has enough juice to power DOOM Eternal for a drive from Johannesburg to Harrismith before having to top it up. As for the thermals, the Switch runs respectably well while playing DOOM Eternal. In handheld mode, I didn’t feel as if the heat was overbearing or causing me to rest the console at any given point.

DOOM Eternal on the Nintendo Switch is yet another testimony for just what can be done on the Nintendo’s hybrid console. While Panic Button has managed to make a rather competent port, there is no escaping the graphical downgrades, but this doesn’t stop it from being an engaging experience from the moment you start it up. For your money, DOOM Eternal is one of the best modern first-person shooters available, but despite it running so well on the Switch, I would not recommend this being the only way you rip and tear, until it’s done.
8

DOOM Eternal on the go is amazing

Better with a Pro Controller 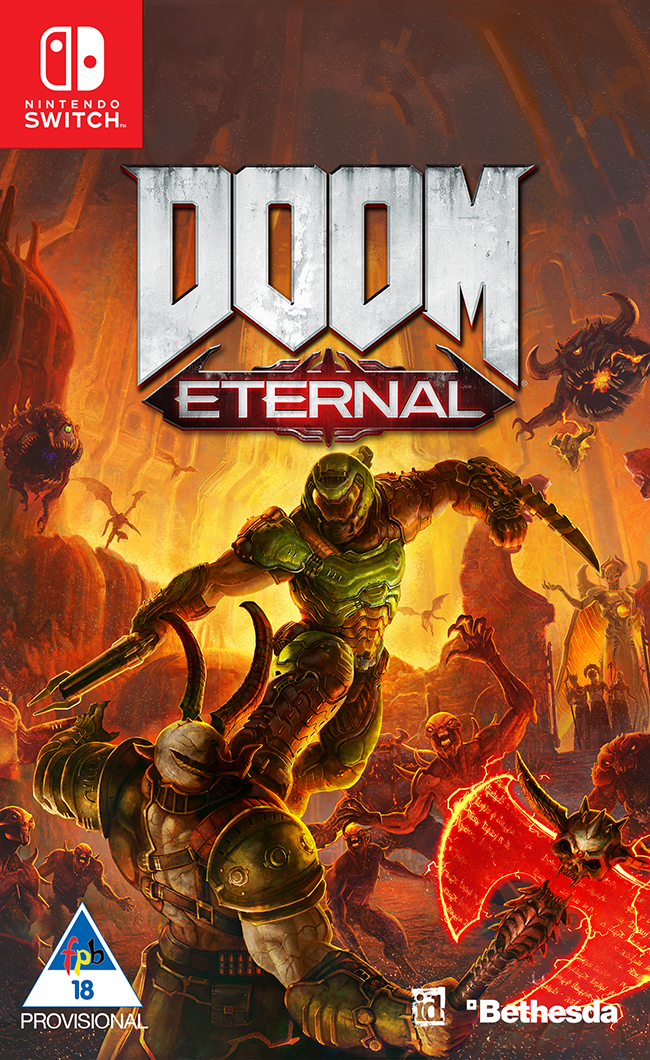