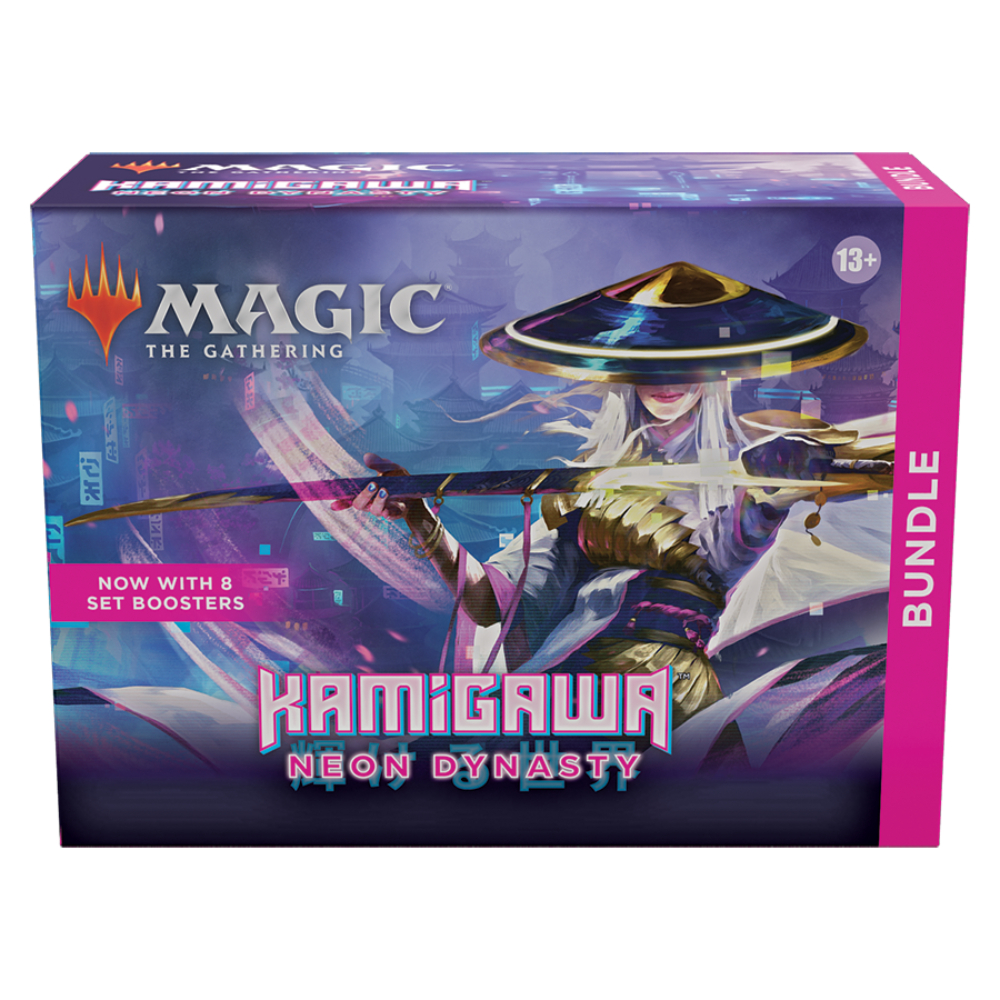 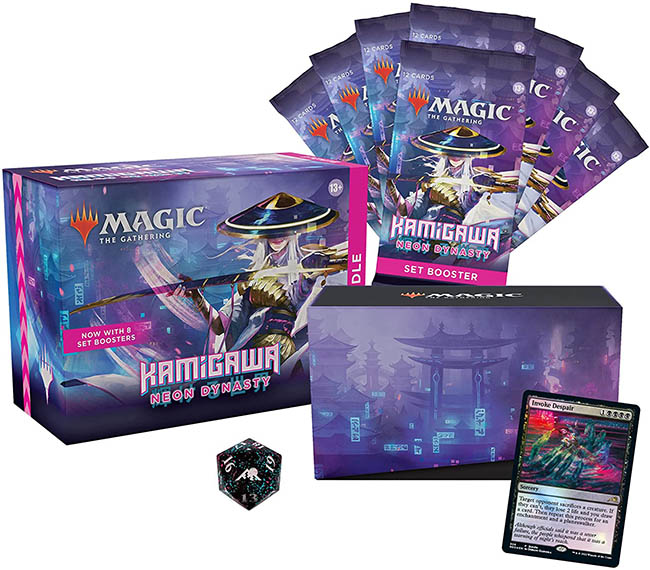 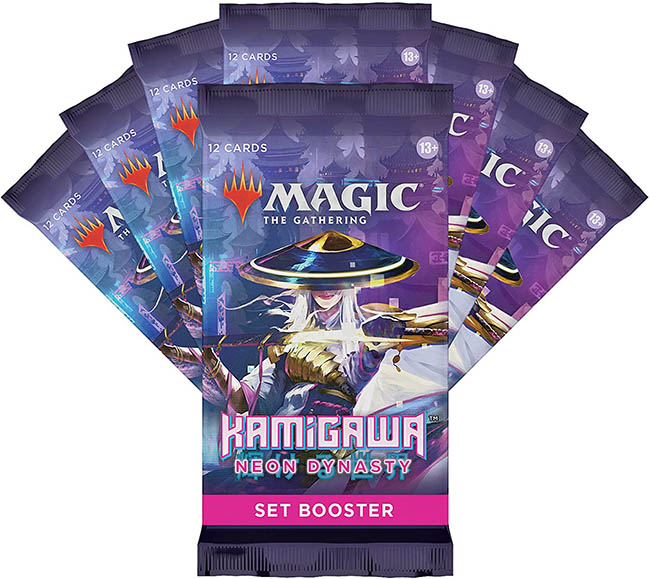 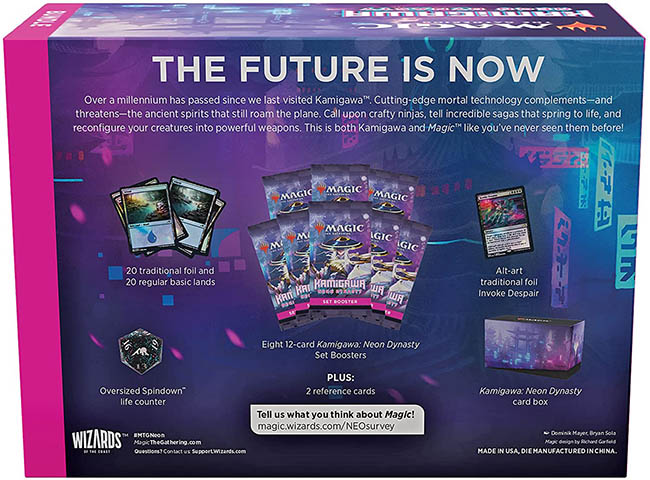 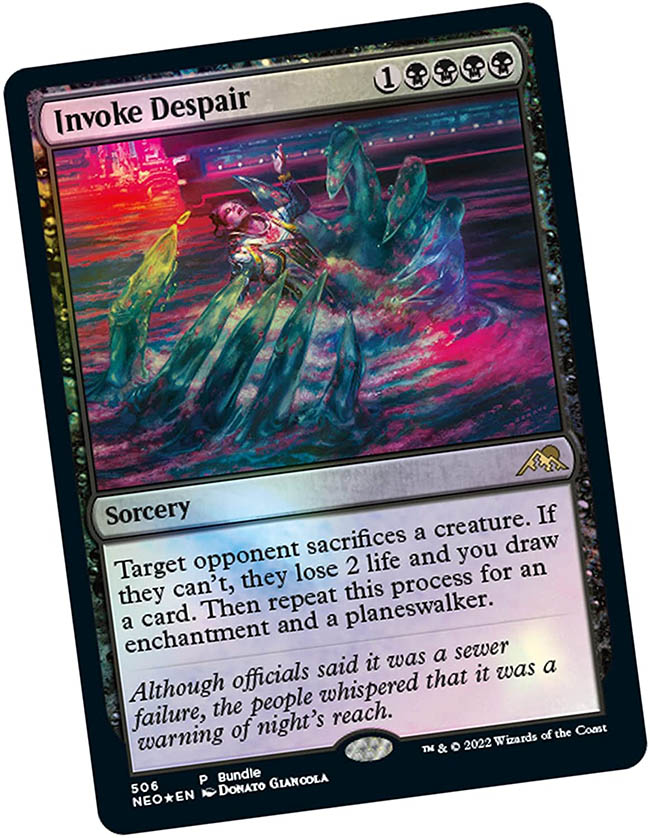 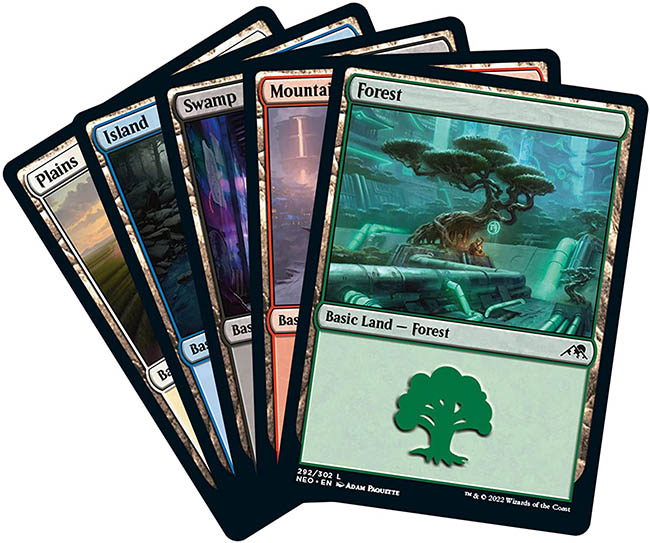 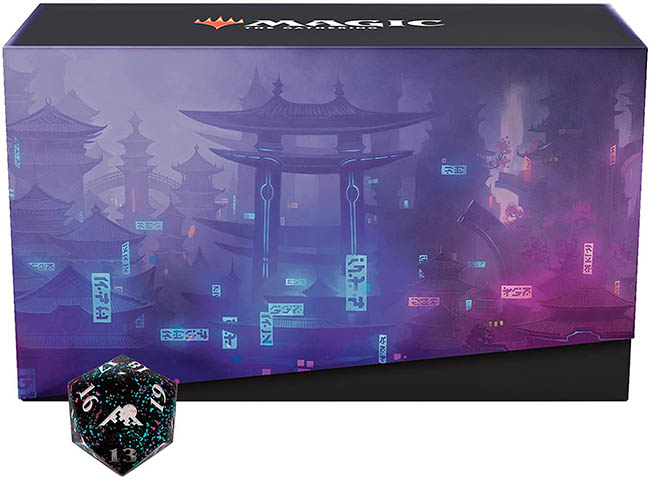 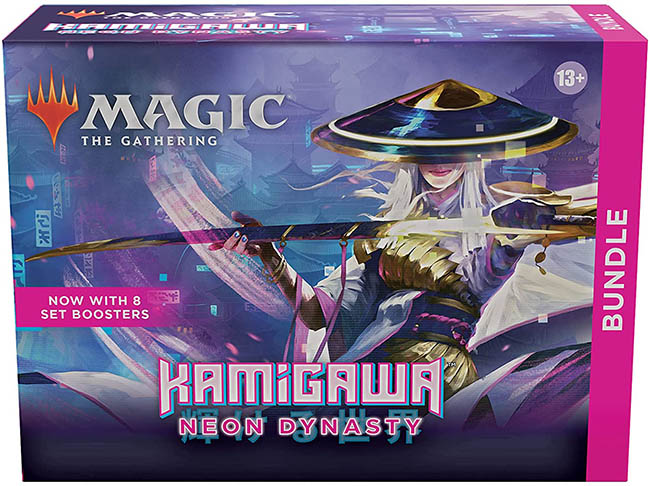 Magic returns to fan-favourite setting, Kamigawa, but this time our story picks up 1,200 years after the original adventure.

The planes feudal past has met futuristic modernity, with ninja and samurai now carrying a cyberpunk aesthetic.

The Bundle is the best way to jump-start your collection of a new set. With a selection of items this is a great product for anyone who wants a little of everything. 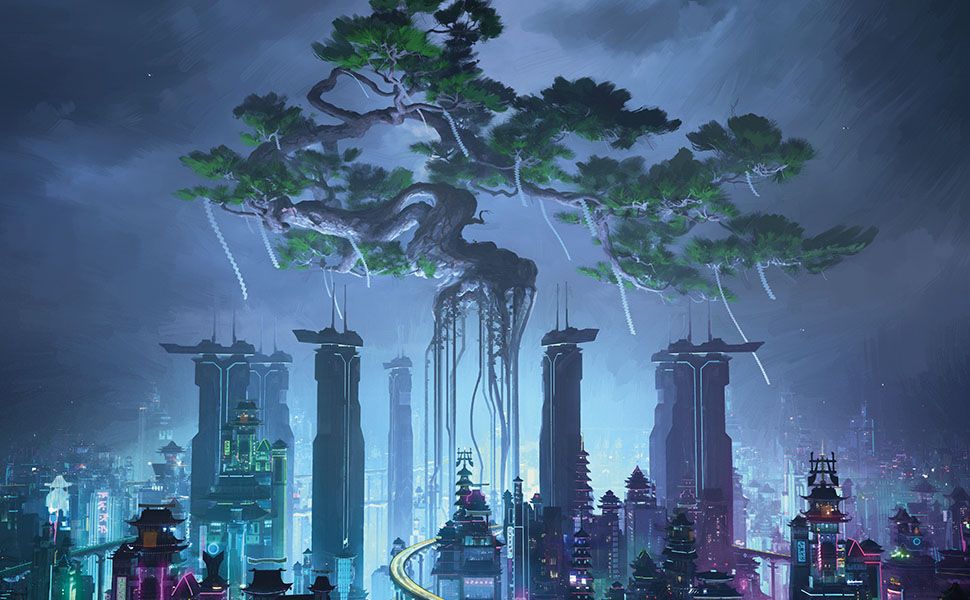 The Future is Now
Over a millennium has passed since we last visited Kamigawa. Cutting-edge mortal technology complements—and threatens—the ancient spirits that still roam the plane. Call upon crafty ninjas, tell incredible sagas that spring to life, and reconfigure your creatures into powerful weapons. This is both Kamigawa and Magic like you’ve never seen them before! 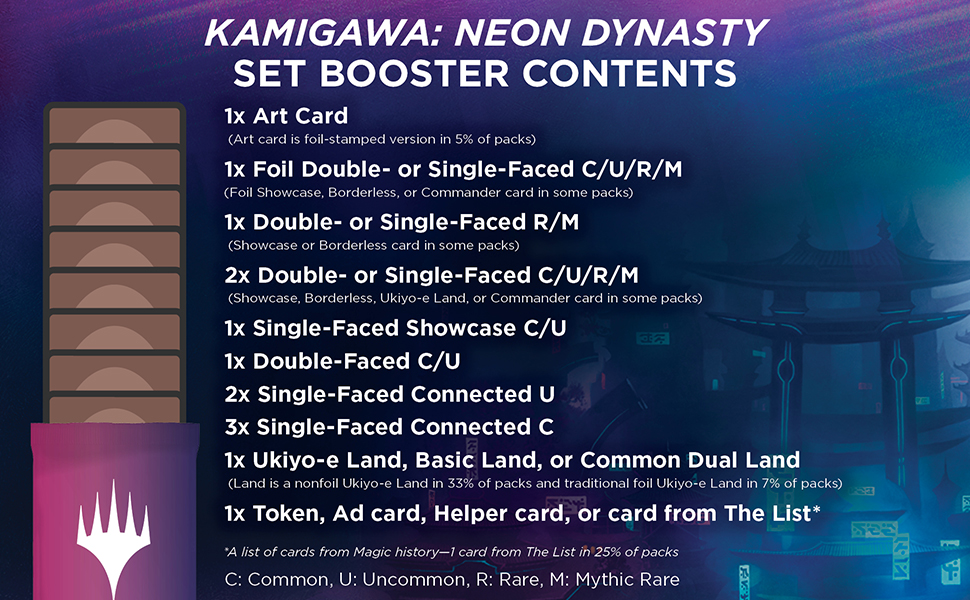 Showcase Frames—Ninja & Samurai
Look sharp and fight sharper. Every ninja and samurai card in Kamigawa: Neon Dynasty can be found with a special showcase treatment featuring striking alternate art in a ninja or samurai showcase frame—including one ninja Planeswalker, Kaito Shizuki, and one samurai Planeswalker, the Wandering Emperor! 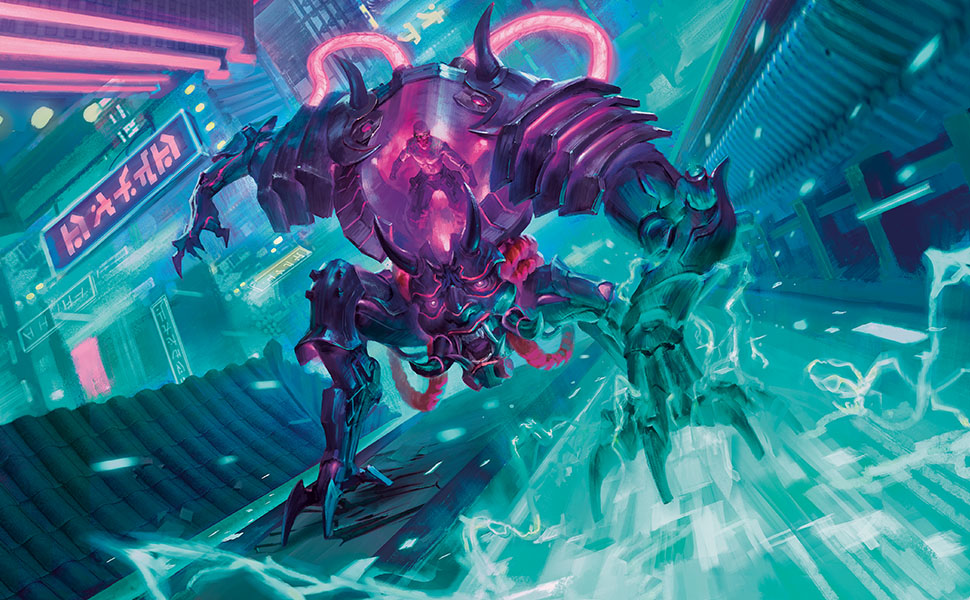 In some Collector Boosters you may find a Neon Ink Foil card with its art and frame highlighted in fluorescent red, blue, or green ink.

PLEASE NOTE: While full of neon-lit streets, bright colors, and shining foils, none of the cards in Kamigawa: Neon Dynasty glow in the dark. 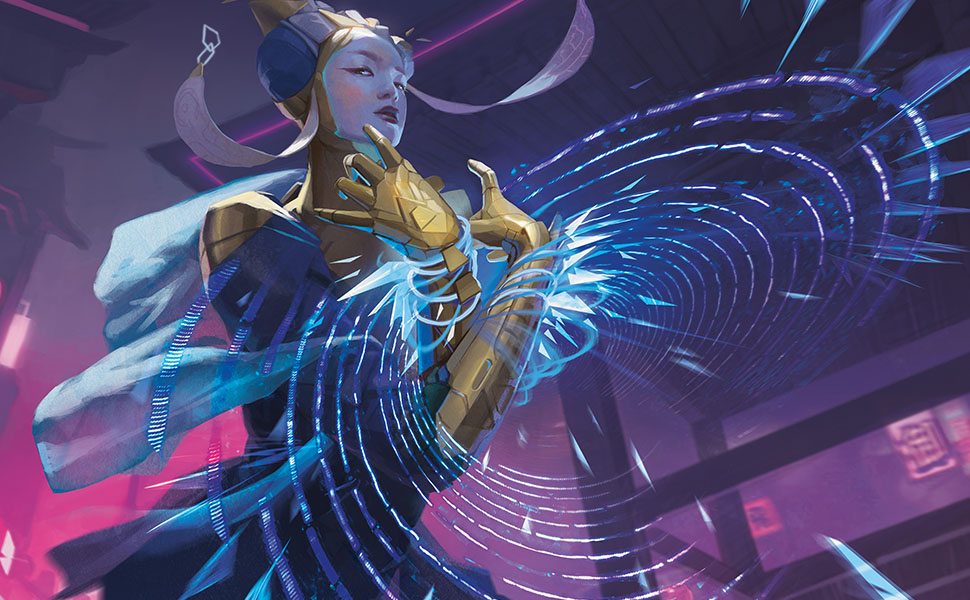 Cybernetically Enhance Your Creatures
The Future of Artifacts Has Arrived
Power up your deck with a trove of futuristic artifacts and enhance your creatures with special artifact creatures that turn into Equipment with the reconfigure mechanic.

Sagas That Come to Life
Kamigawa: Neon Dynasty also introduces double-faced Saga cards. Once their tale is told, these stories come to life—flipping and returning to the battlefield as a creature card.