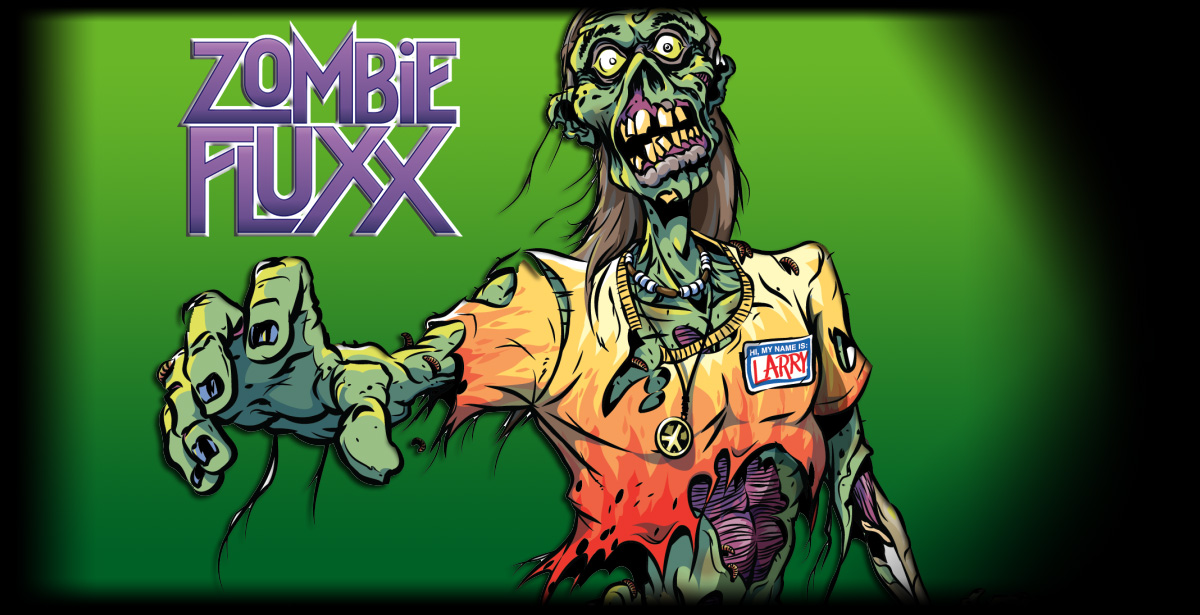 Fluxx is something like the card game equivalent of organised chaos. The game is designed in such a way that it is constantly changing, from its current rules and even through to its victory conditions. Because of this, although you may develop plans and strategies as the game progresses, they are much more likely to become redundant or need to be modified heavily in order to be still viable as more turns pass, much more than most other games, since at any point in the game new rules can come into play and victory conditions can change entirely. So the game obviously has a much bigger focus on luck than strategy, although there are still strategies that can be utilized and lots of combos on cards to look out for, so the strategies are more fluid and need to be adaptable than game-long goals. Also because of this completely fluid and changing system, a new player can enter the game at virtually any point, making it a great party or time-killer type of game. 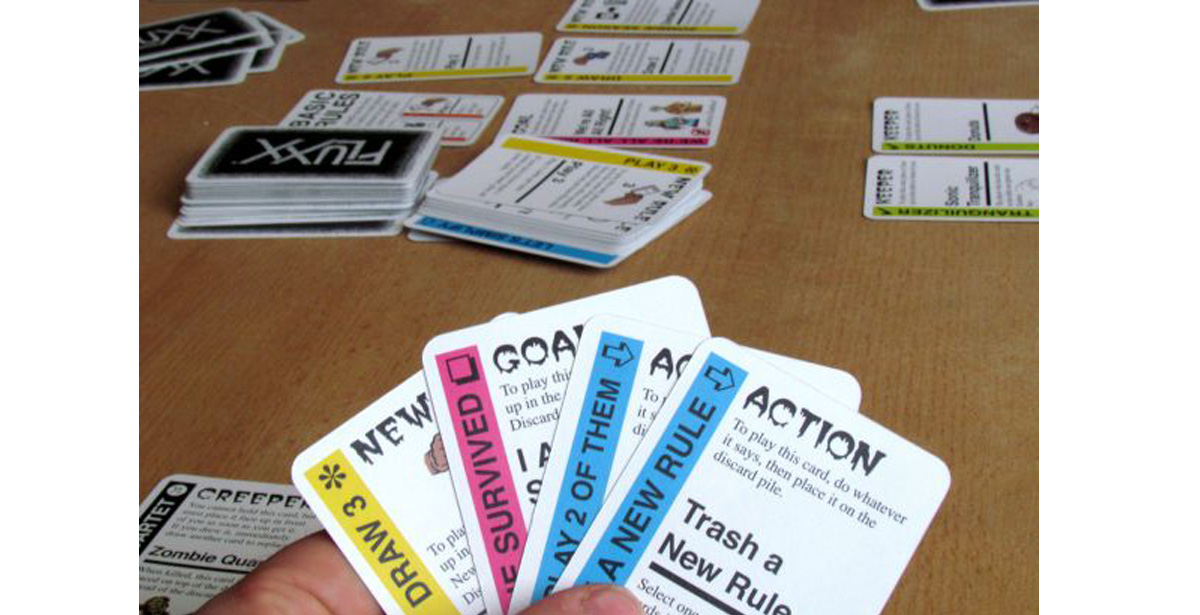 The basic way in which the game works is like this: Players draw and play cards each turn (usually draw and play 1 each, but this can change as “new rules” come into play). There are a few different cards that can be played, such as “Action” cards, “Keeper” cards, “New Rule” cards, and “Goal” cards. Action cards are pretty self explanatory, once off action cards which have an effect and then are discarded. Keeper cards work like equipment or allies in most other games, cards that stay in play and usually offer some kind of benefit or are needed to meet various victory conditions. The other two card types are where Fluxx sets itself apart from most other games out there. New Rule cards can be played during a player’s turn, and then stay in play and change the rules of the game according to what the card says. This can be something simple like changing the hand size or draw limit of the players. Or they can have stranger or more specific rules that players may need to alter their strategies around.

Sometimes a New Rule card will replace one that is already in play if it contradicts it. Goal cards are another interesting concept, also played in a player’s turn; Goals also stay in play and are essentially what the victory condition for the game is. Goal cards usually replace each other, so if a player puts down a goal hoping to achieve it on their next turn, until then it might either get discarded when another player plays a new Goal, or even another player might also reach the victory conditions before the original player gets to play their turn again. So there are strategies in which cards to play when, as well.

Zombie Fluxx further adds to the versatility and general confusion of the game by adding 2 new cards types into the mix. Creeper cards are essentially zombies which like Keeper cards are played out in front of the player and stay in play, but they are not optional and must be played when drawn. These Creeper cards have various bad effects for the player, but most notably usually preventing the player from victory even if they meet the requirements of a Goal card. The other new card type is the “Ungoal” card, which is essentially a goal for the players to all lose and the zombies win the game. While that one sounds kind of pointless, there are some cards which can turn this into a player victory, and also many possibilities where the card is forced into play. Or a player can just be a sore loser and decide to make the zombies win (“If I can’t win, nobody will! Screw you guys, I’m going home!” But, well hopefully not that last part!). 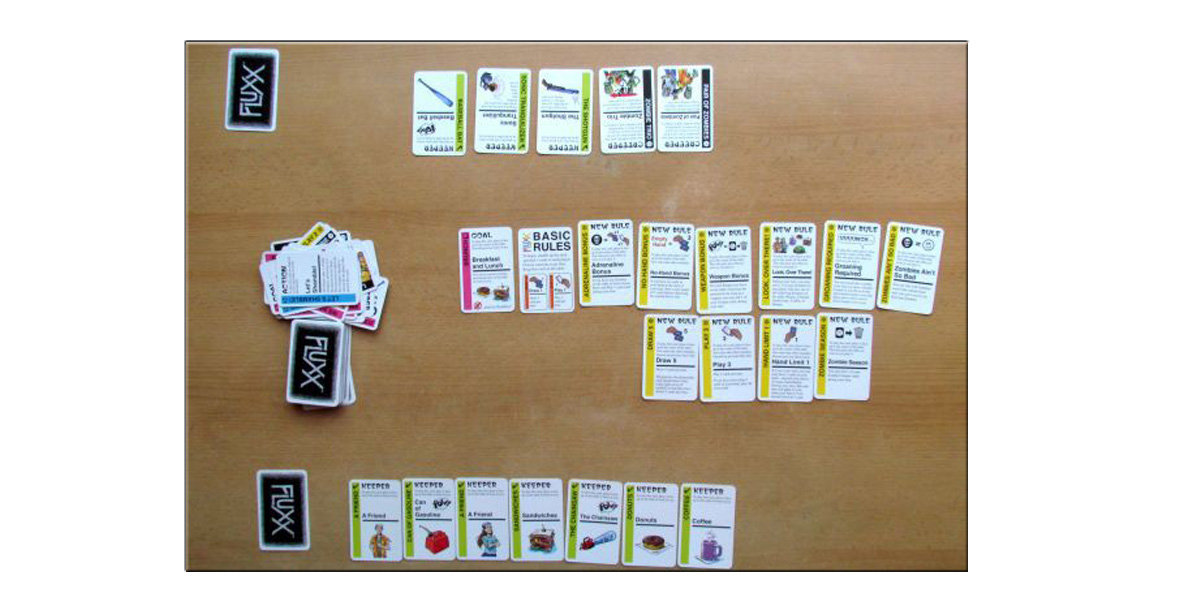 While it’s pretty impossible for two games of Fluxx to be the same, it’s even kind of impossible for one game of Fluxx to feel the same, as after a while you may find yourselves just trying to get enough ducks to get in a row, or get ducks, or get rid of some ducks, or just be wondering where all the ducks are (and probably thinking to yourself (“If I can’t win, nobody will! Screw you guys, I’m going home!”). The game is actually a lot of fun, but that fun can easily turn to frustration. I think the key to the game is really keeping it as light hearted as possible, like really just a silly, social, party game vibe.

In that light, the game is fairly solid, it has a good set of rules, it is fun, it has enough twists and ways to mess your friends around to keep things interesting, and it is simple enough that it could even work as a drinking kind of game if so desired. The downside of the game is that, even with the endless variation, I think the game itself can start to feel old or boring if it is played too often, the overly competitive players may become fed-up with the mechanics of it, and it certainly won’t appeal to any serious gamers. But as a filler or party game that comes out once in a while in a group that doesn’t mind a bit of silly chaos, I think the Fluxx games have a definite place. And like another light-hearted and silly card game, Munchkin, Fluxx also has multiple different theme versions of the game, each with some new and specific cards and rules, letting players choose the genre that best fits them (like Zombies for example).