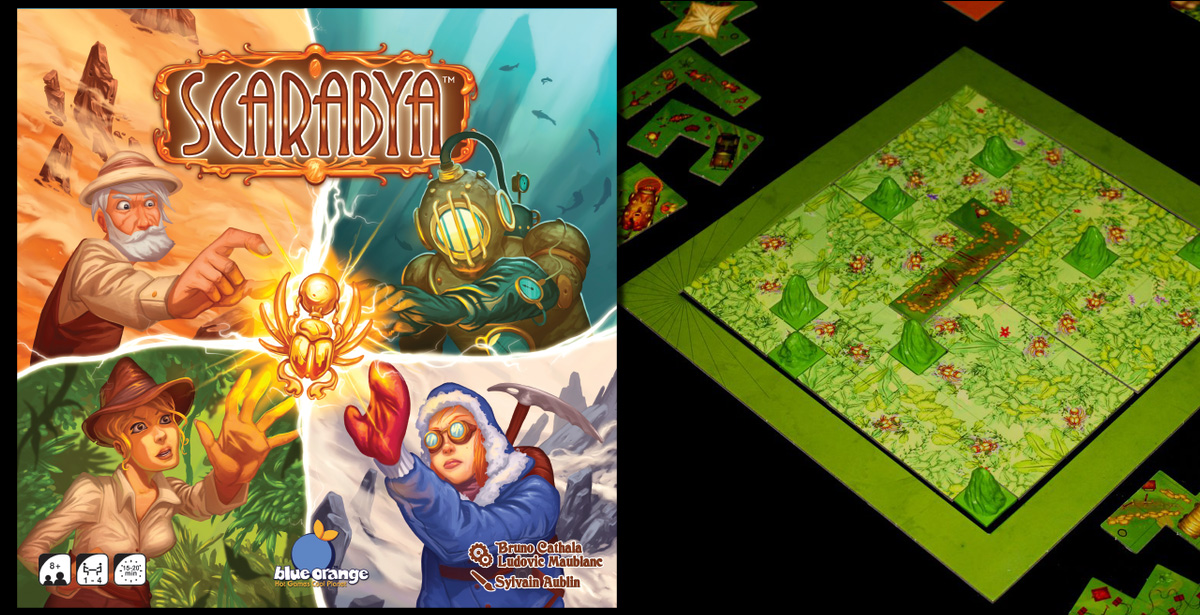 This week we take a look at the family board game Scarabya. This is a very simple game, which offers three different game modes which allows for some variation, although the different modes are not all payable for up to 4 players.

The idea behind Scarabya is that each player heads an archaeological team in a different part of the world, hunting for ancient treasures which are represented by the scarab illustrations on the playing area. Although the theme seems a little redundant, since it is only a back story at best, and just serves to give the game a topic, but really you could be farming sheep instead of trying to locate ancient artefacts, and it would make no difference to the game play. That being said, the artwork does try to make the game look fun and exciting, and to appeal to younger players, and so the theme of a treasure hunt plays into that idea better than farming or harvesting resources might have.

However the game doesn't really play out as excitingly as the art and theme might have us believe. That's not to say the game isn't fun, but it doesn't seem to have a very social feeling, and plays a lot like what many people refer to as multiplayer solitaire. Let me elaborate on that by explaining the different game modes. 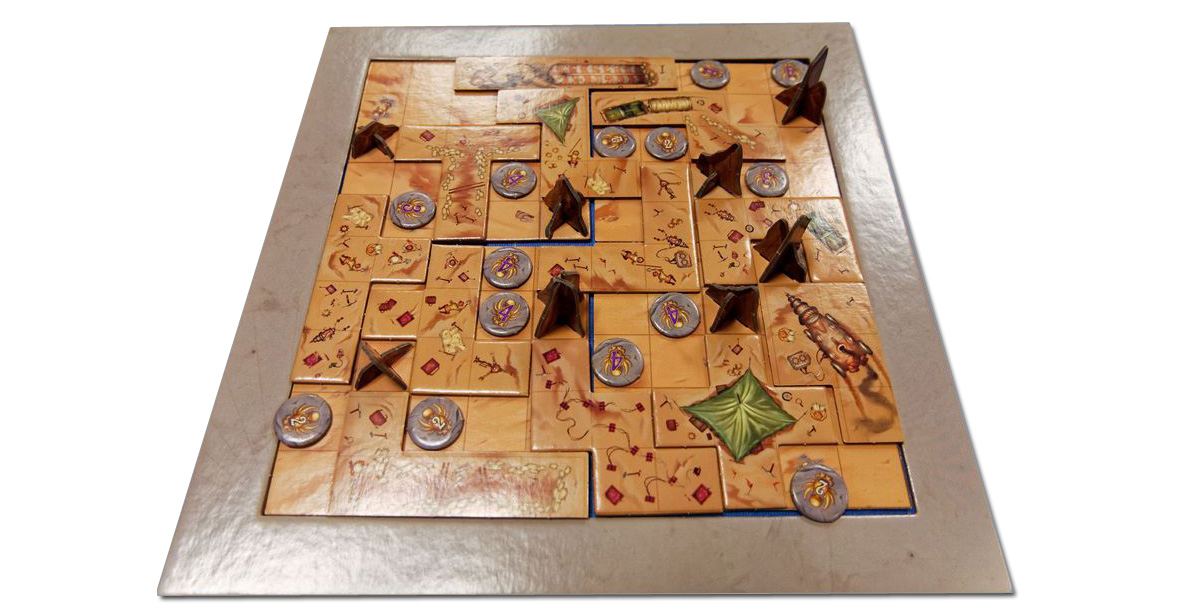 The main game mode is for up to four players. Each player has their own play area, which is made up of 4 squares with different patterns of scarabs and obstructions on them (each different player will have the same 4 square pieces, just in a different colour with illustrations depicting a different part of the world). The first player determines a layout for their squares which will be their play area, and the other players copy that layout. For me I thought that each player having the same layout of their playing area wasn't necessary and may result in players making similar moves, but I suppose the argument is that is keeps the game fair. Once the play areas are set up, players take their turns simultaneously by revealing a new card from the Mission deck which shows 1 of the 12 Tetris styled game tiles that each player then places on their play area. The tiles can't overlap other tiles, pass through the obstructions which are shown as plastic boulders, or go off the play area, and they must touch another tile (the first placed tile must be placed from one of the centre blocks of the play area). Players score points by isolating up to four blocks, and any scarabs isolated in this way will score points according to the number of blocks that have been separated (i.e. 1-4 points per scarab in the isolated area). Once all the tiles have been placed, or discarded if they can't be placed, the points are added up and a victor is determined.

The second game type is for only 2 players, but works in a similar way, but makes the players share a board and thus have a little more interaction and the sense of "cause and effect" from the other player. The turns work in a similar way, but for each card revealed, one player places that tile, each having turns after each other. If a player isolates an excavation site with his placement of a tile, he scores the points for it (regardless of who laid any previous tiles in the enclosure). Once the cards and tiles all run out, players add up their points and a winner is determined. 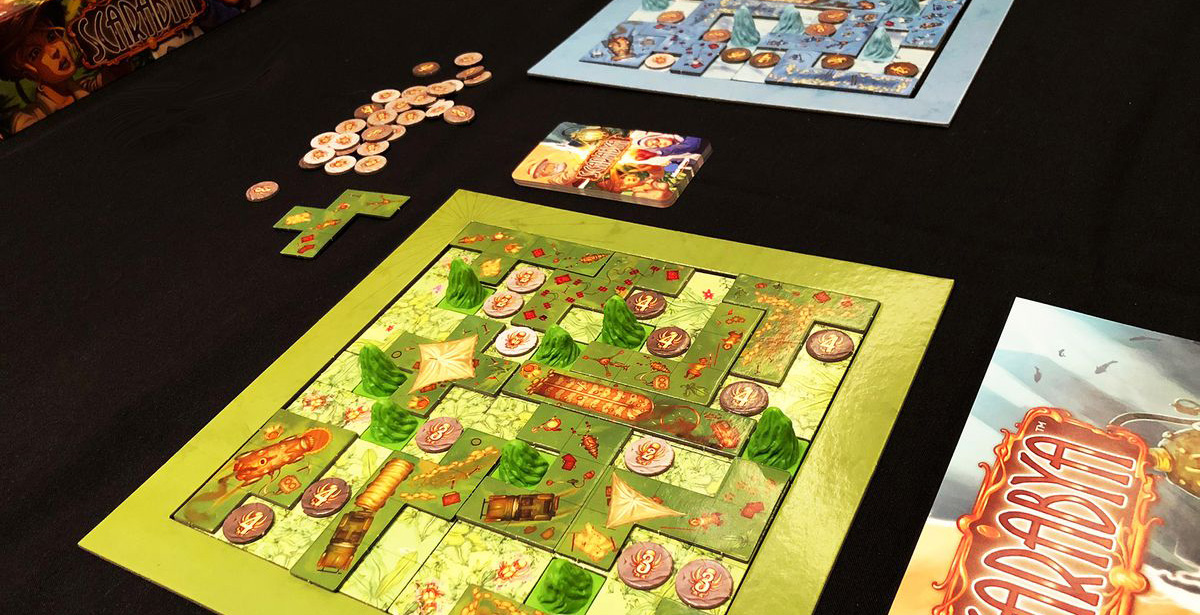 As you can see, the main version of the game (and the solo version of the game), actually play out without any interaction between the other players. What other players do has no bearing on your game. At the start of the first turn, all players have exactly the same choices, and since there is no way to impede or challenge an opponent's game, essentially each player just plays the same game, together, and then see who did the best job. In the alternate 2 player game, the players at least use the same board and tiles, but it is still difficult to really strategize ahead of turns, rather than just react to what tile comes up or what your opponent did before you go.

I found the game to run a bit tediously. It seemed to me there could have been a bit more juice to it. Maybe a mechanic where you could interfere with your opponent's board, or have a trick which would allow some strategy if timed right, like changing a placed tile or opting to draw a different Mission card. Perhaps even stick with the second game mode style but on a much larger play area and have players all using the same area to try to corner out excavations before their opponents. To me the game just really lacks one of the main reasons why a group of people usually play a tabletop game over say an online or electronic game; the social element. You're essentially just doing your own thing at the same table.

Admittedly I haven't played this game with kids, and I have a very limited experience with the "family game night" idea. Most of my games are played between players of a fairly even age, intellect, and even experience level, so I may be missing a lot of what this game was specifically designed as, that is being a Family Game. Played as such, Scarabya has received pretty good reviews, so it probably relies a lot more strongly on who the game is played with, than many other games do. Also, players that prefer a competitive game where they are not directly challenged or hindered by opponents may find Scarabya a lot more compelling than I did.